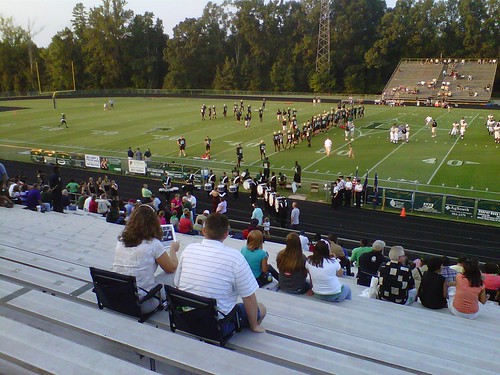 Being in South Carolina for the weekend, I went to the local high school game here in Laurens, SC.

Laurens looks like they’ve built a relatively new school. Their stadium is the standard ‘erector set with metal bleachers’ on the home side and visitors side. I’d say a max capacity of 5,000. The stadium has no use for fans below it. All entry and exit from the stadium must walk in front of the first row of seats (or down on the track).

The stadium has natural grass, but is cut extremely short and at first I thought it was the old astroturf before divots were coming up.

As for the game, Laurens jumped out to a 19-7 lead after one. The Union County started a rather relentless comeback, 19-14, 26-14, 26-21, and then finally 29-26 after going for two. Laurens then gave up the ball and Union County scored again to make the final score 36-26. Quite the disappointment for the Laurens fans.

Now, for the play itself. These teams epitomized the ‘speed’ style of southeast football. The big problem is they were HORRIBLE at tackling and hitting/blocking. It was all about outrunning everyone. On broken plays. End runs. Screens, off-tackle, up the gut, deep passes, etc. It was all trying to outrun the pursuer. Made for an entertaining, albeit aggravating evening. There was one ‘big’ hit the whole game, and that was mostly by accident as a change of direction brought a blocker running straight at a man he didn’t see and got drilled, sportscenter-styled.

There’s some speedsters on the team, but very few could tackle when they got there. Most of the night it was ‘slow the guy down enough to get help to bring him down’.

All in all, a very entertaining evening away from Ohio.