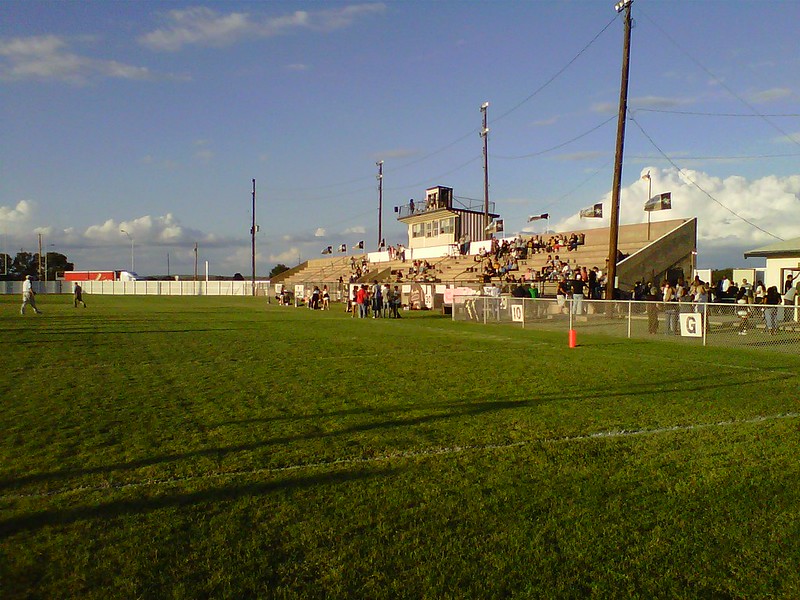 My little football odyssey continues in Texas this weekend.

I’ve seen this Cyclones Stadium several times in the past few years southeast of Amarillo and always said if I was in the area the day of a game, I’d check out a game.

So, that day was today. The Memphis Cyclones are a 1A-D2 school in Texas, were state champions in 1991, and currently 0-4 going into today’s game against White Deer.

Cyclones Stadium is an old concrete stadium built in 1937 (Public Works project), that has eight rows going from roughly the 20 to the 20. The visitors side is an eight row aluminum riser going roughly from the 25 to the 25. Based on a rough guess, I’d say 800 were in attendance for the game at absolute most.

Rather than using the ticket window built into the main stand (and the main entrance at the 50, as well), they setup a card table outside to sell tickets. Which, turned out to not even be tickets. $4 for adults, $3 for students. No ticket was given, you just walk in after paying. A little disappointed as I like to keep them as a souvenir.

Inside, it was like any other small town stadium. Kids played in the grass down by the endzone. Students stood along the fence near the concessions socializing. The band sat at one end. The older fans sat in the stands.

White Deer scored quickly in the first minute, 7-0. After the first quarter, it was 20-0 after a failed PAT. Memphis finally scored on a break away run to make it 20-7. But, White Deer picked up the pace and had no trouble making it 27-7 minutes later. White Deer then scored with under two minutes left, and added to the insult with a faked PAT direct snap to the kicker and while getting dragged to the ground, threw a desperation pass to the corner of the endzone that was complete, 35-7. Memphis then scored in less than 20 seconds thanks to a hail mary pass along the far sideline and then raced into the endzone, 35-13 at the half after a blocked PAT that was almost returned by White Deer for the deuce (who fumbled it inexplicably in the open field, to be recovered by White Deer, and then finally tackled down to end the play).

After halftime, White Deer came out, scoring on a turnover, 42-13. A long Memphis TD run closed the gap down to 22, 42-20. White Deer’s defense kept up the pressure and the last quarter became very sloppy. But, only White Deer could capitalize on the miscues, returning an INT for TD and setting up the offense for a long TD run and another shorty near the end to make it 62-20.

Memphis lost a lineman to an injury (looked like a broken forearm, or hopefully just a severe sprain).

Fans stuck around until the very end, which was commendable. Definitely an enjoyable night out at a little relic in West Texas. Situated next to US287, there was a lot of traffic just outside the eastern endzone (including semis who liked to blow their airhorns as they drove by), and the accompanying train tracks that twice had a train go by during play blasting its horn.

The Cyclones mascot was “Gusty”, which was best described as a cheerleadering wearing a stack of black tires, like the anti-michelin man).