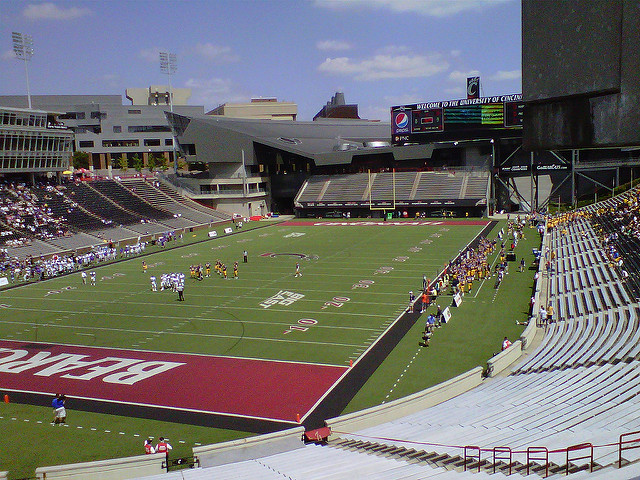 Another high school football season kicked off this weekend in Ohio and marked the first weekend of games for me. Suffering from withdrawal, I went all out for my first weekend under the lights. After an absurd 56 games last year, I’ve determined to see if that mark can be beaten. I’ve gotten off to a great start.

On Thursday, I saw the OVAC Kickoff at Harding Stadium in Steubenville. In an Ohio-West Virginia matchup, Steubenville beat Morgantown 31-9, and Oak Glen beat Richmond Edison 29-28.

Either way, I would see six games in the two days. Driving over from Steubenville, I decided to check out some Kentucky-based football on Friday and the Nippert Stadium games on Saturday. Arrive just before kickoff, parking at Dixie Heights was chaotic at best and a nightmare at worst. Pulling into the school lot, there was no direction on whether parking was full, where to find parking, etc. I finally went through the lot, turned to the right and found a little shop on the right that attendees were parking at and parked along the grass. The whole time I hoped parking there wouldn’t cause problems. The game obviously did better than the stadium was designed for. Covington Catholic was from just up the road and Dixie Heights were playing on their home field.

The stadium, though was a great smaller stadium on campus. Sitting on two levels, the section closest to the field was a few rows high below the concourse and the upper level was up some steps. All aluminum recent construction with a track and artificial turf. Great standing area with a poor view down by the entrance, restrooms, and concession stands. Given the solitary entrance to the stadium, the traffic logjams near the restrooms/concessions. It also requires a lot of people to walk the concourse in front of those on the elevated sections.

The tickets for the Crosstown Showdown were a little expensive at the gate for two local teams playing. The game program covered all the games but lacked the rosters, which were added for the games you were watching when purchased. This meant to get roster sheets for later games meant paying $4. A hefty price for roster. Definitely an inconvenience not worth spending money on.

Now, for these two games, the Dixie Heights Colonels played Covington Catholic Colonels. The announcer really needs to learn that when your opponent is also the Colonels, to not announce plays using Colonels this, or Colonels that.

Dixie Heights started out competing quite well with CovCath (as they call themselves). For their first victory in the Crosstown Showdown, it turned into a rout for the visitors. Trailing at the half 28-14, it looked like Dixie Heights had a firm grip on the lead. But then two quick scores completely shell-shocked the boys in red and silver. From the turnover that led to the tying score, it was over. The final being an impressive, and demoralizing 56-35.

At half a good portion of fans cleared out and made way for a smaller band of red clad fans and blue clad fans. This time now, Simon Kenton from the same school district as Dixie Heights was set to play Beechwood (clad in red).

Again, the ‘home’ team saw the wrong side of the score. In what turned out to be a very uneventful game, Beechwood won easily 28-0. After the game, I drove off into the wilderness of Kentucky to spend the night before heading into Cincinnati for the quadruple header.

After some pregame sushi, I arrived and plunked down $6 for parking and $13 for a ticket. Getting in/out priveledges was a plus. This meant free water from my car, food from the subway just outside the gate, or the Burger King in the one student center that also had a bar.

Best game of the day was the Winton Woods-Lakota West game.

After the day, it was onto Colerain for the ESPN doubleheader. This was the second time in two years to see the Cocoa Tigers and were this time much less powerful offensively. Last year, they decimated 3A (roughly D2-Ohio) Thomas Jefferson from suburban Pittsburgh. This year, Colerain’s defense held them in check all game but one freak broken screen pass.

After that, it was the lazy ride home to Steubenville. Taking the scenic route, I went US50 east to Parkersburg to check out a part of Ohio I rarely get to see. On Monday, I watched the Big Red Reserves play Canton McKinley. Losing 8-6 after a horrible punt backfired with McKinley getting the ball at the one-yard line to punch in a touchdown in a few minutes to go to take the lead.

After reviewing the scores of the Louisville games this past weekend, I might the right choice. All four Kentucky schools lost, by scores of 28-21, 23-9, 48-34, and a disheartening 68-0. Not inspiring of Blue Grass state football.

For next week, I have a slightly less busy schedule. Only nine games on the docket. Cortland Lakeview vs. Howland on Thursday night. Steubenville vs. Akron Buchtel on Friday night. On Saturday, will probably be parts of two games on Saturday afternoon before seeing Steubenville Catholic Central play at Weirton Madonna from a stadium I’ve yet to visit across the river. On Sunday, I’ll see two games at either Ohio Stadium or Monroeville, Pennsylvania’s Antimarino Stadium. Then the two games on Monday at Ohio Stadium. The two games in Monroeville are decent PIAA matchups. Archbishop Wood against Pittsburgh Central Catholic and host Gateway against 3A champion Harrisburg Bishop McDevitt.

Still haven’t decided which two to see. Will probably decide at the last minute, as I do most of my non-local plans.

After Week 2, I’ll be out and about this great big country and will have to take in a much more demure one game a week until late October when I hope to be in Steubenville for the Big Red-Massillon game.

I’ll have a very brief write-up for any out of state game I attend next week (even if it’s just Catholic Central-Weirton Madonna). Until then, have a good week.