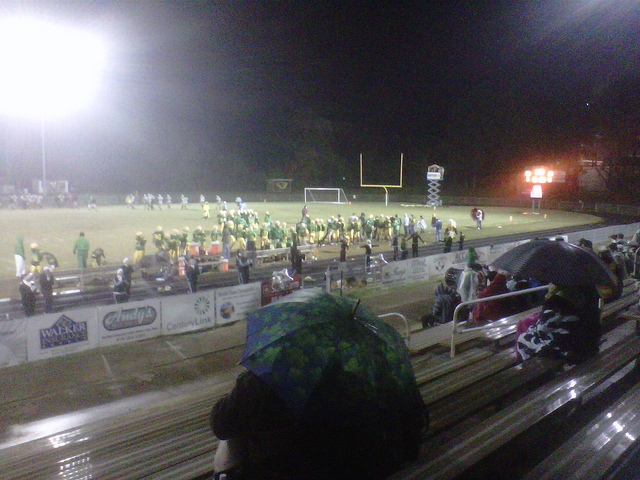 Alright, this promises to be a short update for a few reasons. First among those, I have no photographs or any documentation of what took place in the game other than a few thoughts on the finish. It was a wet, cold night and my phone decided it didn’t want to keep running. So, no notes. Very few pictures, and it was a miserable environment. Secondly, I didn’t make it in time for kickoff. Give credit to North Carolinians, they don’t understand that 5pm means quitting time. So, I was busy up until almost 8pm for a 7:30pm start. And lastly, I only saw one game this weekend.

That game was in the small hamlet of Mebane, North Carolina. Sandwiched between the Raleigh/Durham and Greensboro/Winston-Salem areas, it is located in Alamance County with the principle city of Burlington acting as its central core. The school district comprises all seven high schools in the county. Three regional schools: Eastern Alamance, Western Alamance, and Southern Alamance; and four Burlington city schools: Williams, Cummings, Graham and Sellers-Gunn (who I don’t believe plays sports).

The game was between Eastern Alamance (known as the Eastern Eagles), and the Williams Bulldogs (called the “Boo-el-dahgs” by the announcer).

The stadium is located right behind the high school as part of the Fred Brady Athletic Complex and apparently uses that as the name of the stadium. The stadium is located in a bowl depression with the home stands to the south along the tapering hill while additional metal risers sit freely on the concrete walkway by the pressbox/concession stand that sits independently of the seats. A small visitors section sitting on the grass is accompanied by the scoreboard to the south endzone tucked behind trees.

The fence around the field is about 10 feet from the lowest level of seats that appear to go unused due to horrible sightlines.

Eastern Alamance wore kelly green jerseys, yellow pants and helmets with a Philadelphia Eagles head logo on each side. The Williams Bulldogs wore New Orleans Saints inspired black and old gold uniforms with some type of logo that was very difficult to decipher on the helmet in the rain and mist.

Williams opened up with a 10-0 halftime lead before Williams finally did something about four minutes into the third. A long TD pass made it 10-7. After a fumble (of which there were way too many to count), Eastern setup a very short touchdown drive to go up 17-7. After another fumble and a stop, the Williams Bulldogs hit a beautiful slant for 80 yards for the touchdown. After another stop, Williams fumbled. Another stop, and again a fumble. Williams was driving the ball again late, but fumbles were killing them. After giving up a safety (Eastern, 19-14), they tried an onside that was good. But, they fumbled the ball again.

In the whole game, Williams fumbled at least 10 times, if not more. It became cumbersome to even keep track at that point. It was almost always the center-QB exchange.

However, the miserable game ended in 40-degree heavy mist. The field, for being natural grass, held up beautiful and for a while I thought it was field turf. But, the divots and cut markers were making themselves apparant.

I don’t have any souvenirs from this game except the few blurry cell phone pictures. No ticket stub, game program, etc. The one nice thing here was the southern style chicken sandwiches that were well worth the $3. Eastern is making the playoffs and it was announced they’d find out their opponent sometime today (Sunday).

That brings my season total to 40 games. And, here’s a look back at how some non-event, non-Ohio teams did that I saw this year.

In Colorado, Platte Valley beat Strasburg, 21-7 to raise their record to 6-3 and qualify for the playoffs. They’re visiting Eaton on Friday. Wiggins, their opponent that night in Week 3 defeated Ault Highland, 58-0 but it wasn’t enough for the playoffs it appears despite a 6-3 record as well. Lamar traveled to Trinidad and came away with a 34-20 win, but a 6-4 record was not enough to secure a playoff berth. Meanwhile their opponent, Kent Denver went to 8-1 while doubling up Bennett on the road, 28-14. They host Sheridan on Saturday.

In Indiana, Bishop Dwenger (Fort Wayne) beat New Haven, 31-21 in the first round of the sectional to setup a game with Leo on Friday. Indianapolis Cathedral defeated Roncalli, 20-13 to raise their record to 8-3 and setup a second round game with Greenwood on Friday.

In Wyoming 6-man, Kaycee defeated Hanna-Elk Mountain (aka, HEM), 73-13 in the first round of the state playoffs. They take their 6-3 record on the road to Baggs, WY to face Little Snake River on Friday afternoon. Meeteetse, their opponent, is done for the year with an 0-8 record. In 11-man, Buffalo (6-3) defeated Afton Star Valley, 24-13 to advance to face Douglas on Friday. Their opponent that night, Riverton lost at Green River, 49-21 to end their season with a 4-6 mark.

In Nebraska, both Norfolk (4-5) and Fremont (1-8) failed to qualify for the playoffs.

In Missouri, Boonville (8-1) defeated Versailles, 27-0 to qualify for the playoffs with a home game against Owensville on Wendesday, the 12th. Boonville won the game I saw, 7-0. They won the next game 7-0. Then the next, 36-0. And now won 27-0. Four straight games, and fifth overall that have been shutouts. Their opponent that night, Moberly, is 4-5 with a loss to Hannibal to apparently end their season, 38-13. Crystal City (7-3) defeated neighboring Herculaneum, 18-6 and their opponent Grandview (1-8) got obliterated by Brentwood, 35-0. I don’t know whether Crystal City qualified for the playoffs. I’ll find out for next week’s post.

In North Dakota, Fargo Davies–with a 2-7 record–qualified for the playoffs as the last seed by virtue of a 2-4 conference record. After recording their first home win in the game I witnessed, they couldn’t take on Bismarck, falling 49-14 to end with a 2-8 record. Grand Forks Central (3-6) failed to qualify by virtue of the loss to Davies. Bismarck St. Mary’s Central (4-5) failed to qualify thanks to the loss by visiting Minot Ryan/Sawyer. Minot Ryan (6-3) lost on the road to fellow Catholic school, Fargo Shanley, 42-12 to end their season.

And in Montana’s 6-man level, Jodan Garfield County failed to qualify for the playoffs with their 3-5 record. Lambert/Richey (6-2), their opponent, lost to Geraldin/Highwood, 30-6 to end their season. And Grass Range/Winnett (1-7) and Rosebud (0-8) finished their seasons with another loss apiece. Grass Range lost at Bridge, 62-13 while Rosebud seems to have recorded a forfeit in their game at Savage, 2-0.

A couple of interesting things that I’ve found out are that Wyoming doesn’t charge admission for any game in the regular season. And Montana plays all playoff games at either the higher seed, or a mutually agreed upon central location between the two schools playing. Given a state that could be over 700 miles from one point to another, it is beneficial. This becomes more important as the season wears on. Wyoming used to play title games at the higher seed’s home, but just recently (with the addition of 6-man) started playing their title games in Laramie at the University of Wyoming. I knew this from a while ago when I saw Jackson Hole (by the Grand Tetons) host Worland in a regular season game when my wife and I were visiting Yellowstone National Park. They were the defending champions and had played the game on their home field.

Which, I might say, is one of the more breathtaking home fields you’ll ever find in the country.

Anyways, thanks for reading. I hope to be in the Midwest again next week. No offense to those down here, but I can’t stand the southeast.