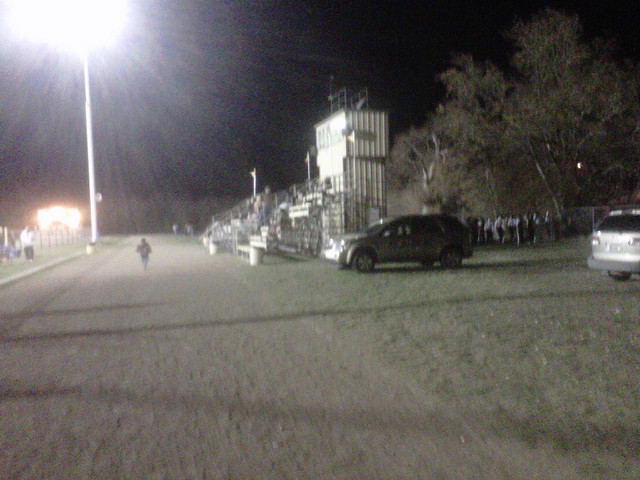 Once again, I’m going to keep this brief. After determining I’d see the quadruple-header at Cowboys Stadium, the only question was what game or games I’d see on Friday. And, that left me a few options in the Sooner state.

I chose the small town of Caddo, Oklahoma to be that game. An 8-man second round game featuring Caddo and Fox.

Caddo Bruin Field is a small stadium situated on the south side of town with an old dirt track ringing the field. Two light standards on both sides of the north-south field. The stands were in three pieces. The primary wooden structure with the press box in the middle. And slightly closer to the field on the outsides was a rather sturdy, although uncomfortable, metal structure.

The ticket and gate were on the southside and tickets were $5 each. A simple concession stand was attached to the gated walkway and was bookended to the west with the restrooms. An overflowing crowd showed up for the game. It was Caddo’s first ever game in the second round. This after they won their first ever playoff game the week before. To say these fans were excited was an understatement.

In the third quarter, Caddo fumbled the ball to Fox on their own four yard line. Fox then fumbled the ball over at the one yard line back to Caddo. Caddo then drove the field and had another one-yard run to make it 29-14 early in the fourth. Fox was then stopped on a 4th and 2 at the Caddo 45. A 35-yard screen pass made it 35-14 and Caddo had won their second playoff game ever and their second of their magical season. They advance to the semifinals next weekend.

This was a fun night out in southeast Oklahoma.

The next day was a marathon of football at Cowboys Stadium in Arlington, Texas. I’m not going to discuss the four games as you can read recaps about all four online in a multitude of places. But, let’s talk about the stadium.

Cowboys Stadium is a shrine to football. This stadium is simply amazing. It dominates the skyline. Which, is amazing considering the preeminence of the Superdome, Reliant Stadium, Lucas Oil Stadium and University of Phoenix Stadium pale in comparison to how this stadium just ‘exists’ in contrast to its surroundings.

The quizzical thing is the Walmart Supercenter that sits just across the street. Definitely an oddball of Texas’ zoning rules, or rather lack thereof.

For $10, you get four games. You get free in-out privileges which can be used to go tailgate at your car, or at worst wander over to the Walmart and get something from the store or the McDonalds. Which is much, much cheaper than buying food in the stadium. $5 for a single water at the stadium, or you can just keep a 24-pack in your car and go out at your leisure when you’re thirsty. If you’re cheap, like me.

The stadium’s concourse level is amazing although the club area is rather bland for the amenities of the stadium. It doesn’t seem to fit. The giant screens suspended from the ceiling command your attention from the moment you walk in. You find yourself watching the game on them whenever the play is at the far end of the field.

The big beef with these games are the lack of coordination. Unlike other states where the state puts on the show, in Texas it’s really up to the individual schools. And although the ‘event’ is planned, there is no structure. There is no unifying program or roster sheet, or even one offered per game. Two of the eight teams playing, that I know of, had their own programs. Cedar Hill in the first game had a nice all-sport program for $5 from a table at the east endzone. Euless Trinity had a simple glossy single-fold roster sheet for $1. The two late games featuring Mansfield teams had nothing. Nor did I notice any of the fans in attendance holding any type of program or roster sheet.

The four matchups were:

Now, Texas doesn’t seem to care about expeditious flow of time. The halftimes are 24-minutes each giving each band a full 12 minute slate for their shows. Combined with the normal game and a predetermined break between games, none of the later games kicked off anywhere near their scheduled times. The last game kicked off over an hour late.

This was the second time I had seen Euless Trinity and Denton Guyer play. I saw Euless Trinity beat Austin Westlake in the 2009 final in San Antonio. And I saw Denton Guyer beat Longview last year in Ford Stadium at SMU in Dallas as part of a doubleheader with Denton Ryan playing Wylie.

The Mansfield-Denton Guyer marks the 51st game I’ve seen this year. I’m seeing five games in Pennsylvania this weekend. The first being Sharpsville and West Middlesex in the PIAA District 10 Class A final at Hickory High School in Hermitage, PA. The next four on Saturday are the 4 PIAA Division 7 (aka WPIAL) Finals. Clairton is going for another title when they play Sto-Rox in 1A. Jeannette and Aliquippa play in 2A for the upteenth time. Montour is going for a win after falling short last year when they play Knoch. And in 4A, North Allegheny is looking to continue their state title defense when they play Upper St. Clair.

Should be fun. Even if Heinz Field doesn’t allow re-entry and you’re stuck there all day unless you want to pay another $10 to re-enter.

Now, as for teams from around the country that are still playing.

In Colorado 1A, Wiggins–who I’ve seen twice this year–advance to the state title game when they host Burlington this weekend. The game will be played at Wiggins HS and I really hope they win. They’re a scrappy team that’s really put it all together starting with that close game against Limon. They’ve manhandled opponents the next two rounds to setup a home game.

Elsewhere, there’s many ‘events’ going on around the country. Some of the bigger ones are in Michigan (8 games), Missouri (7 games), Indiana (5 games), Minnesota (6 games) and several multi-game setups in Texas. I was thinking of driving up to Detroit for the eight games but have felt wrong being a Buckeyes fan being there on the Saturday of ‘the game’.

The week after, I’ll be in Canton and Massillon for the six state title games which will push my total to 62 for the year. And then it’s just a question whether I can see any games in Week 16 or 17 around the country. Which, mostly are Pennsylvania, Florida, Texas, California, and a state here or there that plays their titles in Week 16.