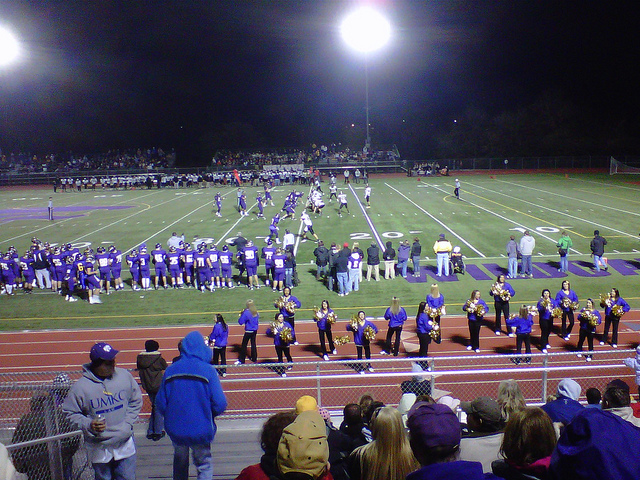 This wasn’t my first thought for a game. I was expecting to spend this weekend somewhere else. But I made the best that Kansas City had to offer and take up a high school game in the eastern suburbs.

The Wildcats of Blue Springs High School hosted the Panthers of Raymore-Peculiar High School of Peculiar, Missouri. The game was an MSHSAA Class 6 First Round contest hosted by Blue Springs at their rather intimate Peve Stadium located just south of the high school.

Arriving eight minutes into the game for reasons that will continue to infuriate me, I was happy to find it only cost $5 for a walk-up playoff ticket. At this point, there were no game programs and again you don’t get to keep your ticket stub (which was nothing special as there was no real identifying marks of what game you were seeing). So, again, my only souvenirs of this game will be my poor cell phone pictures and the lasting memory of seeing what turned out to be a very fun, albeit exceedingly one-sided playoff game.

Blue Springs came in as the heavy favorite and to my surprise were trailing 14-6 near the end of the first quarter. Blue Springs quickly turned their fortunes with a fumble recovery in the Ray-Pec red zone. After the first break, Blue Springs scored a short rushing touchdown to make it a two point game. The run attempt failed, and Ray-Pec held a slim 14-12 lead early in the second.

Now, without knowing the players, I had noted that #7 for Blue Springs was good. Turns out his name is Darrian Miller and has already committed to Kansas. He really was something to watch and a big reason for Blue Springs’ comeback.

Blue Springs scored again on a very long touchdown drive to make it 20-14 after a two-point pass on the fade to the far corner. The drive covered 96 yards and started with under three minutes in the half and took less than two off the clock.

On first down for Ray-Pec, their very elusive and slightly overwhelmed QB threw an interception and was nearly returned only to be saved at the four yard line. Darrian Miller (I believe) scored the four-yard touchdown run that was accompanied by a two-pointer to make it 28-14 with less than a minute to go. After an ‘almost pick six’ that was dropped, the half mercilessly ended for Ray-Pec to regroup and find their composure.

For halftime, the band was the best I had seen all year. The Golden Regiment for Blue Springs was proudly announced as participating in the Macy’s Thanksgiving Day Parade in New York City and definitely deserve their accolades.

In the third quarter, Blue springs had a very long drive to open the half. A fourth down conversion led to a goal line play that backfired. A simply run up the middle that looked to be a touchdown was awarded as a fumble to Ray-Pec at the one-yard line.

Their drive had one of the best plays I have seen executed in a high school game all year. After being stopped for a fourth and long, Ray-Pec lined up for the punt. Selling the fake, the Blue Springs defenders tore through the line on the way to the punter. After drawing the six men it setup a perfect screen up the middle with blockers in front. The receiver raced down the middle of the field with an escort, forced one missed tackle deep in Wildcat territory, and cut to the right side to run the last 20 or so yards in for the touchdown. It was for over 70 yards and had changed the game. Blue Springs now led only 28-21 and needed to deliver.

And they did. A rather nondescript drive ended with a touchdown to make it 35-21. Ray-Pec tossed another interception returned to their 13 yard line. Blue Springs knocked it in again to make it 42-21. A Ray-Pec fourth down ended with a thunderous sack of their elusive QB led Blue springs to an easy 18-yard touchdown run to make it 49-21. With little time left, Raymore-Peculiar threw a long TD pass to bring it a little closer, 49-28.

The onside kick was recovered by Blue Springs and knowing defeat was imminent, Ray-Pec pocketed their timeouts and let the game and their season run out.

Now, for the environment as well. This was a great place to watch a game. The stadium area is all new construction. The stadium is the traditional metal risers sitting atop an annex coming off the back of the high school where the locker rooms are located. The Ray-Pec players had to cross through the fans to return to the field after halftime, which is a bit of an imposition. The stadium sits slightly below the ground level of the school and the only concession stand was up the steps or ramps from the stadium level to the regular ground level. There was a large billboard by the entrance way on your walk to the stands that showcased all the conference, region, and state championships that Blue Springs have won over the years.

The field was encircled by a dark brown track and was the modern field turf. The stadium bore the large school emblem at midfield and had ‘WILDCATS’ written on the southwest corner of the sideline territory.

Now, the Blue Springs Wildcats opted to avoid the obvious color scheme. Rather than using blue, they were Purple and Gold (thick Vikings, only more hideous) with the Kansas State logo in their colors. Their helmets were purple with the KSU logo in purple with only a bright yellow border. They wore purple jerseys with white numbers, and purple pants. A few of the players had logoless helmets and their jerseys had yellow numbers. I assume these to be JV or freshman players.

Raymore-Peculiar’s colors were black and white. Black pants, white jerseys with black numbers, and black helmets. Their logos were grey colored with interlocking R/P. The fans were into the game, but it felt rather lackluster in the context this was a playoff game. Maybe it was the fact the two were in the same conference and Blue Springs had already trounced them once, or maybe Blue Springs makes it so often that this game was an afterthought. The newspaper article leading up the game implied that Blue Springs’ biggest problem would be to avoid overlooking them. Which, they may have done at first, but it all came together in the last 36 minutes.

In other games of teams that I have seen this year outside Ohio or the Rallies, Cochranton (PA) finishes their season tomorrow against Our Lady of Lourdes Regional in Coal Twp, PA. Cochranton is 2-7 on the season now, thanks to back-to-back wins the past two weeks to Eisenhower and Youngsville.

Erie Iroquois (PA) (4-6) finished their regular season with a loss to Cambridge Springs, 14-0. I don’t think they’ll qualify for the PIAA District 10 Region 2, so this appears to be their final game as well.

Laurens (SC) finished their regular season with a loss to Greenwood, 27-6. I still am trying to figure out whether they will be in the playoffs or not. They are currently 5-6. Union County (SC) played Pickens in the first round of the AAA playoffs, winning 42-16 to up their record to 8-3 and advance to the next round.

In Texas, Memphis finished their season with a loss, 55-6 at the hands of Wheeler. Their closest game of the year was a 20-12 loss to Highland Park. White Deer, their opponent in the game I saw, are 7-3 thanks to a 27-16 win over Vega (TX). Their playoff fate, it appears, hangs in the balance now. I’ll keep any of you reading this updated next week with what happened.

In Iowa, Des Moines North and Des Moines Lincoln are both done for the year. In Iowa, it’s already the state semifinal round. In 4A (the largest), West Des Moines Dowling (12-0) takes on Ankeny (9-3). In the other semifinal is Bettendorf (12-0) taking on the Iowa City Little Hawks, also 12-0.

In A (six-man), 1A, 2A, and 3A, they’re still in the quarterfinal round this week and don’t play until Monday. Another quirk of non-Ohio playoff setups.

In Nebraska, both teams I saw are done for the year. Grand Island lost in the first round while Lincoln East failed to qualify. In the late games, Jurupa Valley of Mira Loma, CA hosts Bloomington. Jurupa Valley is 1-7 coming into the game and Bloomington is 3-5. Jurupa Valley is essentially out of the playoff picture yet, due to other states with other rules, are mathematically alive with three games left. Riverside Norte Vista isn’t doing much better, sitting at 4-4 coming into their game tonight against Riverside Patriot.

In Mississippi, Meridian defeated Terry, 42-7 to extend their record to 11-0. They’re already locked into the playoffs for November 12th as the #2 seed in 6A behind nationally ranked South Panola. Jackson Jim Hill’s season came to a merciful end at the hands of Hattiesburg Oak Grove, 38-6. Jim Hill ends the season with a final record of 1-10.

So, it is another week of high school football in the books. Another game. Another state. Another memory and another chance to see how the rest of this great country takes in the local Friday night lights.

Now that it’s playoff season in most states, it will get tougher to find a game. But, as always, if it’s Friday night, odds are I’ll be at a stadium where the lights are on.