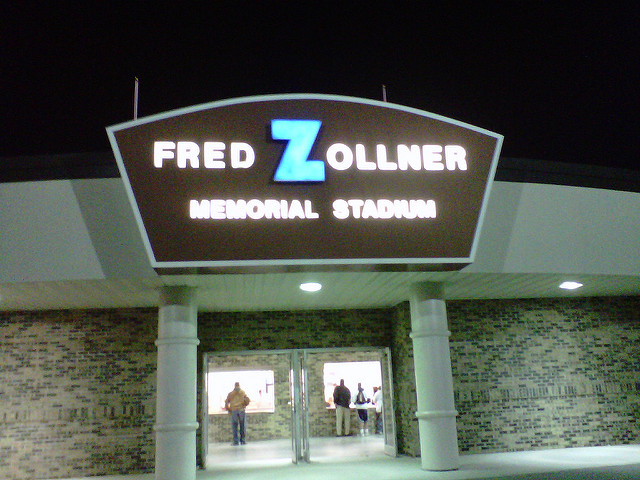 Another two-game weekend. This time crossing over state lines. On Friday night, I was in Florence, Kentucky and walked to the Boone County High School’s Owen Hauck Stadium to watch Boone County host Louisville Male.

The stadium is located behind the high school and carries dual names. Owen Hauck is a former coach, while Irv Goode Field is named after a former player. The stadium is a nice bi-level setup. The plaza area by the restrooms and concessions is located above the field level, almost in line with the lower row of home side seating.

The stadium has a walkway in front of the first row with several stairways coming up to the seating area. Boone County has a large scoreboard on the northeast side proudly displaying the dual name.

Now, for being a ‘large team’ in Kentucky, Boone County’s field doesn’t show it. A grass field that already is deteriorating.

Boone County wears North Carolina inspired uniforms. An interlocking BC is in exchange for the NC.

The game started weakly for both teams. Twice Male fumbled away the ball on the first play of their drives. But, Boone County could do nothing with it and turned the ball over on downs twice.

Finally, Louisville Male broke the scoreless game with an 11-yard run to make it 7-0 late in the first. Boone County countered with a 59-yard TD run, but had the PAT blocked, 7-6.

In the second quarter, Boone County intercepted a tipped pass and returned it to the two. Next play, they hammered it in and missed the conversion, 12-7. A few minutes later, Boone County scored on a 38-yd TD pass. Again, the PAT was blocked, 18-7.

Louisville Male drove deep, converting a 4th-and-11 but were intercepted in the endzone. The Rebels then ran out the half.

Early in the second half, Boone County scored again to make it 24-7. In the opening plays of the fourth quarter, Louisville Male scored a field goal to make it a two possession game, 24-10. Boone County then resorted to ‘ground and pound’ and ate up the rest of the game a series of time-consuming running plays that Louisville Male couldn’t answer.

After the game, it was off to sleep. Some early work in the morning and I was in Fort Wayne, Indiana just after 6pm.

There was one game in the whole area to attend. That being the rematch of last year’s title game: Fort Wayne Bishop Dwenger hosting Indianapolis Cathedral. As with many Catholic schools, Dwenger didn’t have their own stadium, and instead rented out Concordia Lutheran’s home field (Zellner Stadium).

Zellner is a nice facility across the street from the Concordia Lutheran High School. The cab drive that took me there got lost as he had no idea where it was located. Because of this, I missed what turned out to be the winning score of the game.

But, back to the venue and teams. The stadium sits from roughly the 20-to-the-20 with the ‘home’ Concordia Lutheran side on the southwest side. When Bishop Dwenger uses the field, their ‘home’ side is the northwest side and faces the sun. The stadium itself is nice. All brick facade from the street with the old style ticket windows at the gate, then all-brick enclosed concession stand behind the bleachers. The bleachers were accessed only from the outside fringes. The ‘home’ side was accessed from there by walking around the outside of the track the far side.

Now, the stadium is decent. All grass that’s showing major wear. But, it is a nice stadium. The big issue is obstructed views of the field. The ‘home’ side for Bishop Dwenger has two light poles about four or five rows up from the field. Meanwhile, their away side (the true home side) has the light poles behind the seating area. However, to make it equal, it seems, are two large poles holding up loud speakers. Which makes little sense to ruin a clear view of the field.

Now, for the teams. This was my second time seeing Indianapolis Cathedral this year. They wear the standard ‘Notre Dame road uniform’ with, I think, “Cathedral” across the chest (couldn’t tell, didn’t get any good pictures and I was sitting too high up to get a good view). Meanwhile, Bishop Dwenger was wearing the ‘Notre Dame home uniform’ with only slightly darker helmets. A more bronze color than gold.

I know it is simply aesthetics, but the unoriginality of most catholic schools is mind-numbing. Either gold/blue, gold/green, gold/burgundy, or blue/yellow seem to the overwhelming color schemes of catholic schools in the midwest.

At least Dwenger was the ‘Saints’ as opposed to the Cathedral ‘Irish’.

As for the game, this one was literally over before I got there. Thanks to the remarkable navigational abilities of a cab driver to get lost in his own city where he works every day, I arrive roughly five minutes into the game. Just enough time to see Cathedral trotting off the field from kicking a PAT to make it 7-0. It turned out to be all the points they’d need.

Bishop Dwenger made a good drive to counter, but were forced to kick a field goal. It would be their only good drive of the game. After this, it was a clinic by the boys in white.

Up 21-3 at the half, Cathedral tacked on a 1-yd touchdown run to go up 28-3 just over two minutes in. Rubbing it in a bit, Cathedral did three laterals (toss to the running back, toss to the sweeping receiver, and toss back to the QB) to setup a wide open 56-yd TD pass to make it 35-3. Another 2-yard touchdown run made it 42-3 at the end of three.

Mercifully, Cathedral and Dwenger went through the motions and no scoring happened in the final frame. The home team Saints were young and unpolished. Slow, skiddish, and telegraphing their plays too well. Stutter-stepping isn’t effective against a team with the closing ability of Cathedral. A dive, even ill-fated, would be better than hopping around the back field waiting for a hole to open that never will.

After that, it was a slow trickle as the few thousand in attendance made their way out to the parking lots.

Another fun weekend. A little hectic, but fun. With these last two games, I’m up to 24 games on the season in 6 states. Ten in Week 1, Ten in Week 2, two last week, and two this week. I’ve seen games in Ohio, Pennsylvania, West Virginia, Colorado, Kentucky and now Indiana.

The two Colorado teams I saw in Kersey were both idle. Lamar played at Alamosa and won, 24-23 Friday afternoon. They’re back up to 2-2 on the season. I’m not going to recap other teams I saw in the Herbstreit Classic, Crosstown Showdown, Gateway Kickoff Classic, or OVAC Kickoff Classic. Nor the Ohio teams I’ve already seen.

I’m not sure what the future holds. Or whether I can keep up this streak of seeing both a Friday and Saturday game, but I hope so. It’s a lot of fun.

I’m trying to organize these posts onto my website ([url]http://www.sykotyk.com[/url]) with the photos I’ve taken with any news articles I can muster online to compliment them. Hopefully in the next week or two I can find time to do that.

But, until next week. Thanks for reading and have a good one.