However, due to a fluke of the schedule, Kentucky and Ohio both have had their season reset one weekend into the future this off-season, while Pennsylvania is still running on the same weekend. This means Pennsylvania and Kentucky are starting the second to last weekend of August.

I had decided, then, to stick to Pennsylvania for “Week 0” games, instead of an annual trip to Kentucky. However, there was still the possibility of Alabama. In the southeast, many small private schools aren’t members of their state’s association. Those small private association, such as Alabama’s AISA, are then members of a regional organization called the SECIS. The Southeastern Commission of Independent Schools.

And recently, they have been playing two doubleheaders at the Cramton Bowl in Montgomery, Alabama the week before what would be called “Week 0” in Kentucky and Tennessee. But, it’s Alabama. In August. Not the drawing power you’d expect.

So, I started browsing around. Alaska and Hawaii start early. Hawaii started the first weekend of August. But not a trip I’m making any time soon. And then, just going through the list I found a nearly whole slate of games in the Beehive State.

These are “Endowment Games”. A game played the week before the regular schedule commences that are hosted by member schools to fund the UHSAA’s Endowment. A fund that is then used to pay for the catastrophic loss insurance coverage most states require or carry for their member schools. The two teams playing receive a fee for hosting or traveling, and any additional revenue goes to the UHSAA. If there’s any less than the fees paid to the participants, the amount paid is below the original agreed amount.

But, the schedule means that Utah is starting in mid-August. With one really good game to kick it all off. Defending 5A champion Corner Canyon hosting defending 4A champion Orem. The Corner Canyon Chargers call Draper home, a fast growing area south-southeast of Salt Lake City. The School had only been in existence for six years when they won their first state championship. 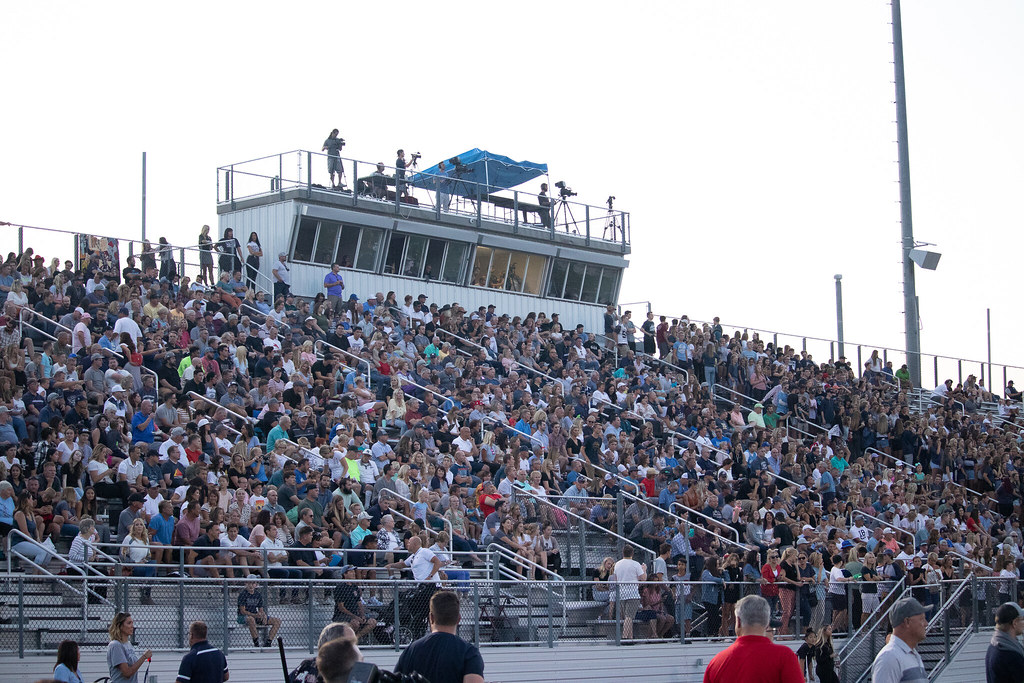 The game was televised nationally, with huge media presence and the Corner Canyon fans came out en masse for a Thursday night lid-lifter.

Orem moved the ball easily at first, and a volley of touchdowns led to a halftime lead of 21-14 for the home team. The second half, however, slowed considerably. Orem’s offense started stalling. And Corner Canyon was cautious to let their slim lead be jeopardized. Orem, though, backed into a corner, let the game slip away with a botched punt snap that rolled through the endzone for a safety. And a seemingly insurmountable two-score lead for the Chargers.

Another touchdown after the safety put the game safely away and the game meandered to a fateful end, 30-14.

The stadium itself is very nice, and sits right along the Wasatch Mountains, the range that sits just east of the populated corridor running north-south through northern Utah. The name, Corner Canyon, comes from the 12-to-9 bend the range makes just east and south of Draper. 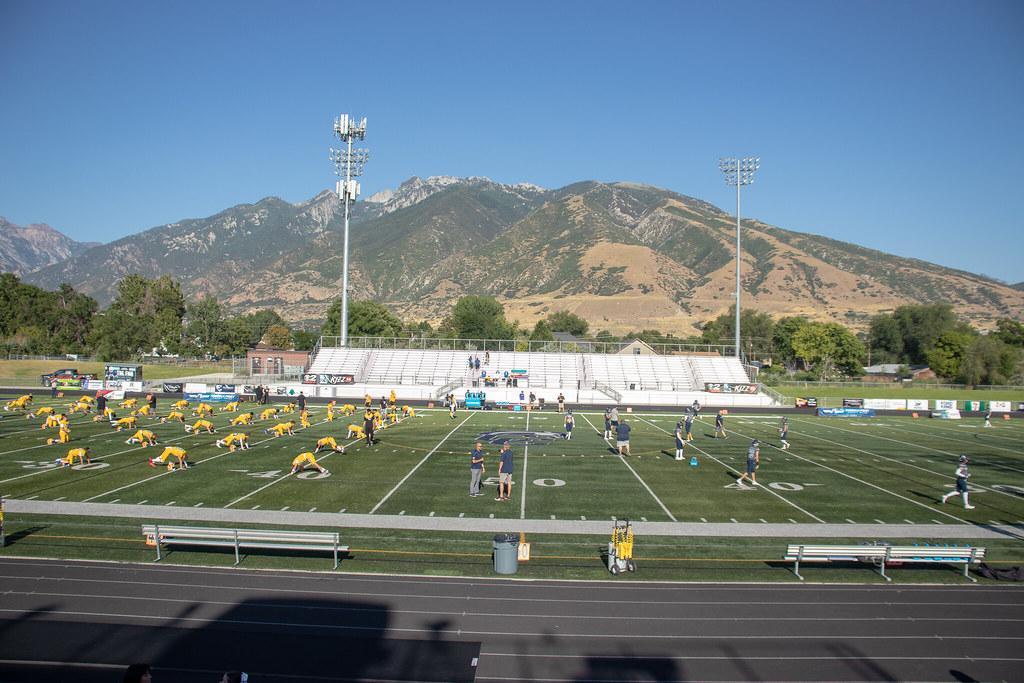 The view is spectacular and the field, even in mid-August, was cool and dry and reasonably comfortable despite the high-90s temperature just before kickoff. 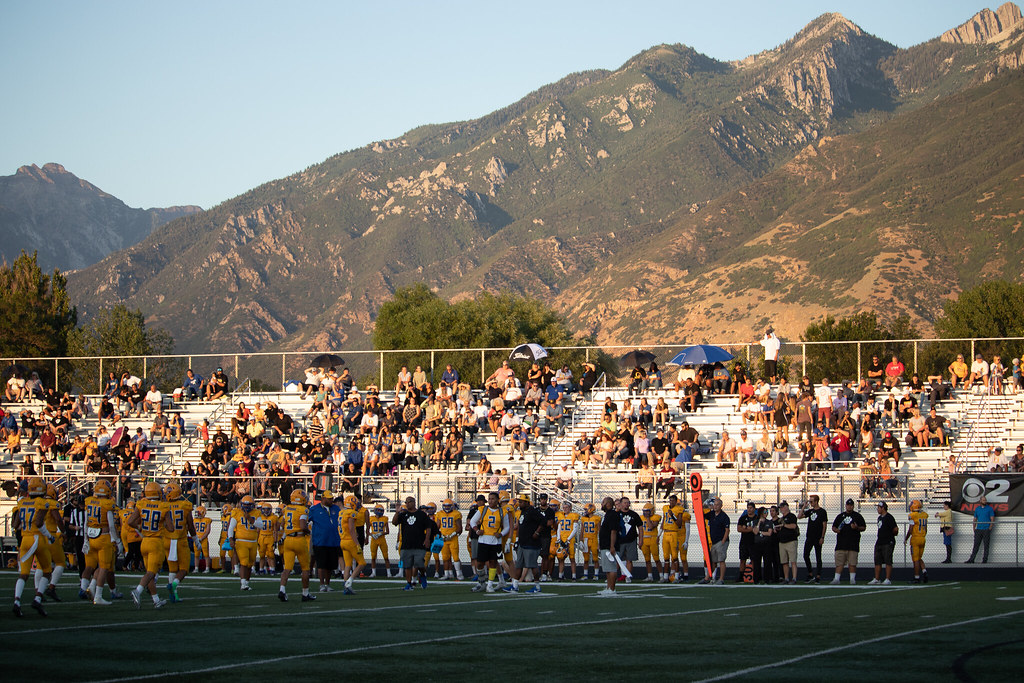 The stadium has turf and a new track, but woefully inadequate restrooms. Continued construction may make up for that. The concession stand sells “World Famous” Charger Fries. That I wasn’t quite sure what they were (I didn’t order any or make note of it), but they PA consistently reminded fans that a local restaurant had donated the spuds used to make them.

After the game, it was a decision on where to go next. Most of the Endowment Games were along the populated stretch of I-15, from Logan, Ogden, through the metro area, down to about Springville and Spanish Fork. There were three others and two inparticular that interested me. The easiest to reach would be Duchesne hosting Enterprise. A defending 2A running up in a small town north of the formidable, and impassible plateau that runs from Helper Canyon east along the northern view of I-70 into Colorado. Only a trip through Helper Canyon on US6 or US191 can get you between US 40 and I-70.

However, there is only small area of Utah that has always had a sentimental favor in my mind. West of the La Sal Mountains in eastern Utah, south of the well-known and incredibly congested with tourists Moab, is a small town named Monticello. It sits at the meeting point of US 191 and US 491. The latter formerly well known by its bit more devious number, US 666. Monticello acts as the gateway to the remaining hinterlands of Utah. Between Kanab, the Moki Dugway, and Monticello, there isn’t much in the way of getting from southeast Utah to the rest of Utah except either of those two junctions. And Kanab is mostly lower Lake Powell, Page, and Grand Canyon focused traffic. And the Moki Dugway is, for all intents and purposes, a scenic drive down a cliff, rather than a thoroughfare.

So, much of the traffic seeing the sites such as Natural Bridges National Monument, as well as Gooseneck State Park, the famed Mexican Hat, and the final stop on the Forest Gump Running Tour, better known as Monument Valley travel through Monticello when visiting the rest of Utah.

A bit out of the way. But a town I've wanted to see a game in for years. I'm finally here. And they're hosting Monument Valley. Another stop on my bucket list. Maybe next year. @PaFootballNews #BeyondTheKeystone pic.twitter.com/Uip72szBsB

Now, Monument Valley would be on my all-time bucket list site to see a game. I’ve been to their stadium in one of my few trips through the namesake valley. However, they’re on the road at Monticello.

Monticello might not be as scenic, or that common a place for people to just know it. But, having traveled through there many times, and seeing the field once nearly a decade ago, I always said I’d attend a game if I were ever there on a weekend in the fall.

And this year, I was there on a weekend in the fall.

So, I had to make the five and a half hour drive from Salt Lake City to Monticello on Friday to see the game.

You have no idea how awesome it is that nearly a decade after I said I'd see a game here that I'm in Monticello, Utah for a football game. @PaFootballNews #BeyondTheKeystone pic.twitter.com/1bwYQwIT98

I got into town a bit early and had some time to kill. I walked around the streets around the school, took some photos, and then made my way back to the field. The stadium has been redone with aluminum, and there’s some ‘rough edges’ to the grounds that appear to be a work in progress. The track is run down, but manages to somehow be about 5 inches above the surrounding Earth. A perfect thing to trip over.

The lighting is very poor, and very yellow. Despite four light standards on each side, the illumination is just lacking. Daytime, however, provides a great view Abaja Peak, and the surrounding Bears Ears National Monument that has been so contentious.

Monument Valley had never beaten Monticello. In 20 previous attempts since 1985, the Cougars were winless against the Buckaroos. Tanner Tsinigine, #28, for Monument Valley was an incredible force. State champion in wrestling this spring, he was the Cougar offense. And their defense. Had several bruising runs and two interceptions on defense to keep things even in the first quarter. 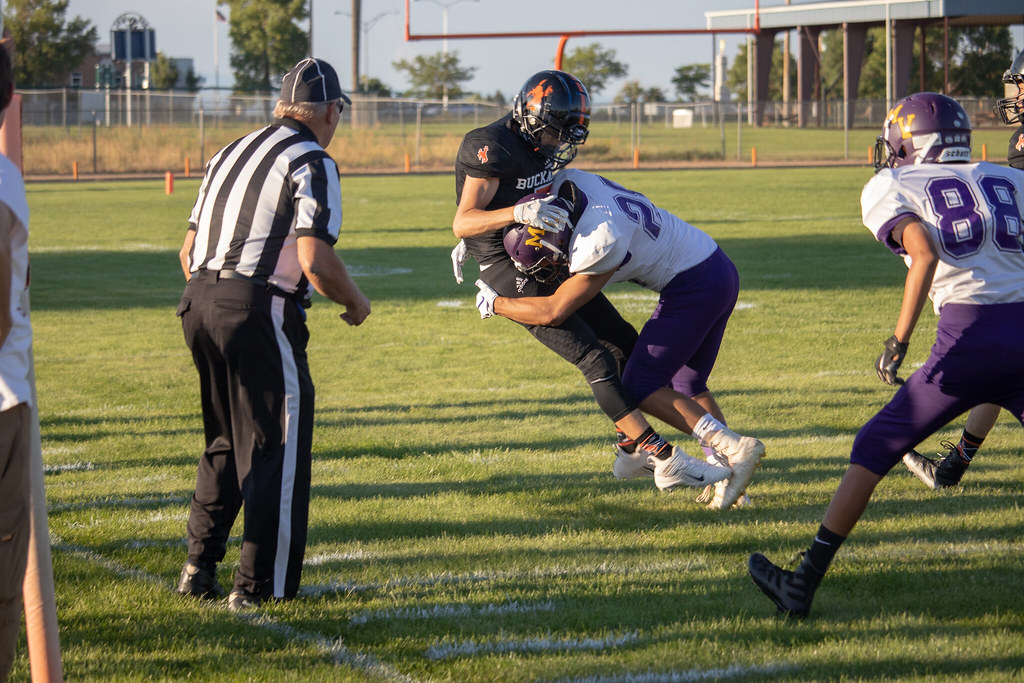 Including this big hit.

Until after an interception in the shadow of their own goalposts left them with bad field position. A pass attempt that was tipped and caught on the run by a Monticello defender resulted in the first score of the game.

After that, the flood gates opened in the second. Monticello tacked on four more touchdowns and Monument Valley managed only a single score on their first completion. a fluke that went for a touchdown. Despite another TD in the third, the running clock didn’t seem to drain the remaining time that quickly. A slew of running plays and lack of scoring contributed to a brisk fourth quarter.

After that, it was a bit of shock. First week of the season already over. Completely unplanned and purely by happenstance.

For more photos from these two games, click HERE.

For photos from other games and previous seasons, visit http://www.flickr.com/sykotyk/sets/