So, Friday afternoon was a short drive to venerable Cupples Stadium on Pittsburgh’s south side. I arrived over an hour early and watched some practice and waited for the main gates to open. Nearly a half hour later than usual.

The first half was fairly even, as an early USO lead gave way to a 20-20 tie with Perry’s comeback. However, the fourth quarter was all USO as they notched three touchdowns to run away with it at the end, 38-20.

For the night game, it was a tough decision. The 3:30 kickoff paired with a 7pm kickoff for a night game meant for a short radius. My original plan was Cornell v. Sto-Rox. A matchup that just looked like it was going to be a good one. But, at over 14 miles away, the projected time was treading over a half hour. Which would give me minutes to spare before kickoff.

With a long trip planned to Buffalo for Saturday, I was looking for something north or west of town. So, Upper St. Clair and Peters Twp were out. Baldwin was out. But, there was one game kicking off at 7:30 that was north. And that was North Hills-Hampton.

The drive from Cupples was incredibly easy. The drive was projected at a brisk 11 minutes. Just up McArdle behind the stadium to Liberty Bridge and a quick straight shot north through town on 579 and 279. Parking, though, at North Hills is a nightmare. Even arriving 50 minutes early meant a long drive around to find where to park.

The game itself had lived up to its hype. A big crowd filled in for North Hills. Including their student section overflowing the AA section. The walkway overlooking the one endzone was quite crowded. Hampton didn’t travel as well, but their fans were into it.

Martorelli Stadium is a great venue. A field house sits to the other endzone. But $10 programs were a bit overpriced. I bought a seat cushion for only $3 as my souvenir.

The game was a low scoring affair. For thirty six minutes only two touchdowns were scored. Late quarter drives by North Hills to make it 7-0 after 1 and 14-0 after two. And then a scoreless third. And then five TDs in twelve minutes made for a lively, if slightly anticlimatic finish. North Hills was always a step ahead. Winning, 35-14.

After the game, driving north, I was treated to a lightning display in the sky. And the news that the Greenville Perkins building had burned during the night. Most likely from said lightning. 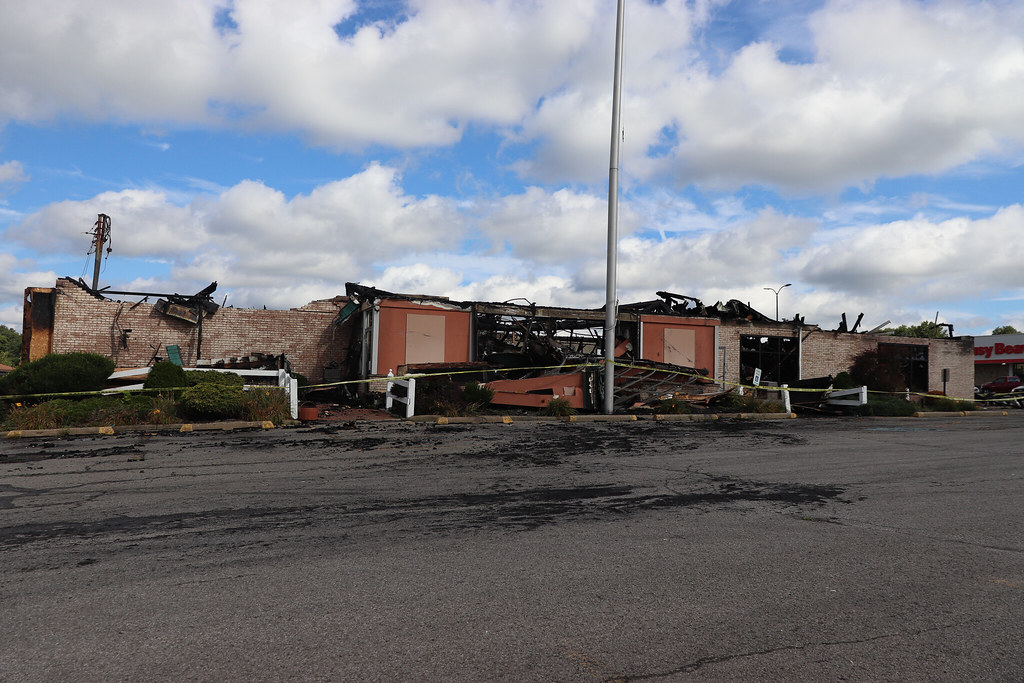 My Saturday morning was adjusted slightly. I had planned to drive all the way to Buffalo for a 1pm kickoff at St. Joseph’s, who were hosting Bennett. However, there was one other option that looked intriguing. An afternoon game in Falconer, just east of Jamestown. It was an hour closer and kicked off an hour later. Driving through Greenville with my daughter, it made my choice to adjust my schedule a lot easier.

The game was at beautiful Bill Race Field. A huge crowd filled the home side. The visits from east of Rochester arrived in numbers. The stadium features brand new field turf. Blue endzones with gold lettering. A video scoreboard. There’s still some work being done near the entrance. But, for a home opener is a great venue. A shame they are forced to co-op due to numbers. The weather was perfect. A light breeze. A moderate temperature. And partly cloudy for a mid-September game.

And a great game. Tied at 6 going into the half. A quick offensive output by Red Jacket made it 18-6 after three. And then the Golden Cougars made their move. A TD drive late. Took possession late, drove the field, and faced a third and short inside the 10. And then a fourth and 3. But were unable to move the chains and Red Jacket was able to kneel on the ball. Ending the game at 18-13.

My souvenir from the game was a program for $3. After the game, it was a 45 minute drive to Silver Creek. For an exceedingly rare Saturday night game in western New York. Aside from two Chautauqua Lake games on Saturday night, the only other two games were a Yorkshire Pioneer home game and this game as part of the Festival of Grapes that takes place in Silver Creek.

This was a game of two co-ops. The Silver Creek Black Knights and the Forestville Hornets co-op many sports together. And on the other side, the three-team co-op known as the CSP Wolfpack are defending Class D state champions. The three furthest southwestern schools in the state. Clymer being just ten miles or so north of Corry.

Silver Creek has a nice field. It’s simple. A track surrounding a grass field in a shallow bowl. Admission was free again, as it was earlier in the day. Some schools do charge admission in New York. But others are free or near free. Something I had only ever seen previously in Wyoming. Where regular season contests are free admission.

My souvenir from the game was a $5 seat cushion. This one is pleather, and very nice, with the Silver Creek Black Knights logo and name on it in yellow on the black material.

For the game, it wasn’t much of one. The differences between the two teams were staggering. Silver Creek battled all game. But CSP were too much for them. Three TDs in the first and second quarters made it 40-6 at the half. And two more in the third made it an easy night for the Wolfpack. The final, 53-12.

The drive home was 2.5 hours and with a bit of time added for shunning the NY Thruway. Which I regularly do. Driving US20 instead, including seeing the Orange Bowl in Fredonia lit up for some sort of football or rugby match. At least based on the scoreboard and it didn’t appear to be with helmets or pads. But it’s now on my list for a Friday night game sometime in the hopefully not too distant future.

Next week is going to be a bit of a change of pace. I’m planning a game in Kansas. And as many more as I can based on game scheduling. Kansas would be my 37th different state to see a high school football game in. Though I have seen an MLS game previously and just this year a wood-bat league baseball game in Junction City.