So, back in Colorado again. Eastern Colorado. Not the noteworthy mountainous parts that most people association with the Centennial State. Instead, it’s the expansive plains of grassland for as far as the eye can see. Mostly.

So, Thursday was a bummer. But, I had already set my sights on a Friday night game at Wiggins. Now, Wiggins is a team I’ve seen twice before. And, nearly saw them play a third time back in 2011. My first ever game in Colorado was Platte Valley hosting Wiggins in the small town of Kersey. I remember that game, because from the stands, the field looks out at US34 running toward, and just north of the field. And at some point early on, a near real-life replica of the famous Wagon Queen Family Truckster from Vacation came rolling by. Complete with incredibly shiny Airstream camper trailer.

That little note aside, Wiggins was a team that just seemed to criss-cross my mind when looking for games in Colorado. Later that year, while scanning for a Saturday afternoon game in the playoffs, after seeing a Friday afternoon game in Cokeville, Wyoming and a night game in Green River, Wyoming, I drove all the way to the small dot of Limon, Colorado for a 1pm kickoff. And they were hosting Wiggins.

I had an ever so brief shot at seeing a home game of theirs, but passed on it. Something I regretted not long after. I did see a Brush Beetdiggers game instead, hosting Lamar (a team I also saw twice) instead at one point.

So, if I was going to be in Colorado on a Friday night, I was going to see a Wiggins home game if they had one. And this week, they had one. They were hosting Yuma, another small town just shy of 80 miles east of town. Unlike it’s more well-known Arizonan counterpart, Yuma, Colorado is a small blip in the aforementioned expanse of grassland.

But, once I had my Friday night planned, I found a Friday afternoon game. Weldon Valley, located just 15 miles northeast of Wiggins in the town of Weldona, played six-man football at an unlit field. And with school closed on Friday, their home game was scheduled for 3pm on Friday afternoon.

And lastly, my Saturday plan was one of two eastern Colorado games I could find. Wiley was hosting Holly, while Springfield also had a game. However, I’ve seen a game in Springfield years ago. An 8-man playoff game against Dayspring Christian. So, stopping in at Wiley was high on my list.

This afternoon I'm in Weldona, Colorado for an 8-man game between the Weldon Valley Warriors and the Flagler/Hi-Plains Thunder. Kickoff is set for 3pm local time. Follow me for live updates from the wind swept plains. #37 @PaFootballNews #BeyondTheKeystone pic.twitter.com/G2uZOzzJgt

With my itinerary complete, it was on to Weldon Valley. Now, to say that Weldona is off the beaten path is an understatement. A small, windy road takes you between Wiggins and Fort Morgan. The ‘valley’ isn’t that impressive. But, it makes the road jog left and right at various points. It’s a great little ‘town’, though, and the school sits near the northern edge of the street grid.

The field is actually the outfield of their baseball diamond. The pressbox is a small, but imposing structure, built at the edge of centerfield. Some small portable stands are brought in for the home and away fans. Though, only a few used them. As with many six-man and other small stadiums in the west, fans stood around the field. Or pulled their cars up to the edge of the field and sat in them to watch the game.

The scoreboard was minimal, but designed for football. Just the score, time, quarter, down and distance. No timeouts or line of scrimmage listed. With the 80-yard field, it made it a tad easier to follow for distances. And I’d need to, as Flagler/Hi-Plains were regularly making trips to the endzone.

Flagler/Hi-Plains are a co-op between the Flagler Panthers and Hi-Plains Patriots. Hi-Plains is located in the small town of Siebert. Both are little towns along I-70 in Eastern Colorado. But, as numbers become an issue, they formed a co-op as the Flagler/Hi-Plains Thunder. A team, on the road, decked out in head-to-toe white with black numbers and THUNDER emblazoned across their chest. Only a faint dark blue outline of the numbers to break up the simplicity.

The Thunder were good. A team in contention for a state title. Maybe third in line behind #1/#2 Kit Carson and Stratton/Liberty, the two teams that vied for the state title last year. Weldon Valley, however, weren’t good. The Warriors had only 8 players dressed. And I was informed at least one of them was a female. She played regularly in what would be called a ‘fullback’ position, though I don’t recall any rushing attempts. In six-man, the FB position is more an extra blocker, and pitch-back position to move the ball to the true quarterback who can then run with it. This led to the very unfortunate, but not too surprising, 44-0 first quarter lead by the Thunder.

The second quarter was a little better for the Warriors. Scoring two touchdowns of their own to match the two scored by the Thunder. The running clock had started already, when the margin reached 45, and resulted in Weldon Valley scoring on what would be the final play of the half.

Ah, the cannon. All three stadiums this week featured a cannon. But the one at Weldon Valley made your body flinch, even when you knew it was coming. You felt it when that thing went off. The fans, chain crew, and officials joked about making you jump, even when they were aware of it. The first touchdown, a surprise in the second quarter, was unexpected. But knowing it for the second still didn’t diminish the impact it had.

With the running clock not stopping for hardly anything–only officials timeouts, not even scores stopped it–meant for a very quick second half. The 10-minute quarters in a six-man game breezed by. Flagler/Hi-Plains were scoreless in the third, while Weldon Valley got another one. Making the score a more respectable, 56-20. Another in the fourth drew it to 30, but Flagler/Hi-Plains scored on the final play to make it 63-26.

After that, it was a short drive south to Wiggins.

On the road to Wiggins. #roadtrippin pic.twitter.com/E0k5lXMu7t

Wiggins is a small outpost just west of the dual cities of Fort Morgan and Brush. Located along the tracks leading southwest toward Denver, it sits a few miles off Interstate 76, the “Lincoln Highway Cutoff” from I-80 to Denver. The school has been fully rebuilt, and sits on the southwest corner of town.

The field itself sits further southwest. Modern aluminum, full eight-lane track, concrete pathways and new parking lots, an entry arch for ticket booths, a concession/restroom building to the left after you enter, complete with picnic tables. And yet still with plenty of room for cars to pull up on both the home and visitor sidelines on the far end of the field.

Wiggins is a small 1A school. A very small school with 17 players this season. Their stadium, though incredibly nice, is overbuilt for their expected crowds. A small smattering of fans sat on either side, as many stood along the sidelines and stayed in their parked cars. Including the fun of honking their horns for Yuma touchdowns by the Yuma faithful. But, watching a game on the prairie such as this, gave one spectacular sunset.

Wiggins had trouble moving the ball with consistency. And Yuma took advantage of some early opportunities to score their first TD, on a 4th and 3 play, rushing 34 yards to paydirt down the left sideline. A field goal try by the Indians made it 10-0 in the 2nd, but the second FG try was short and wide.

Finally, after struggling for 33 minutes, Wiggins got on the board with a 7 yard TD run. Making the game a toss-up and eliciting excitement from the very quiet and somber Wiggins fans. But, early in the fourth, Yuma scored on a 43-yard TD pass make it 16-6. A lead that again felt insurmountable. And it was, as the Yuma Indians would go on to win, 16-6.

For the Friday games, it was a fun mix of games. The six-man game just really makes you remember why high school sports even exist. And why they matter. This small little dot that most probably don’t even know existed still were out to support their town, their school, and their kids. Like a lot of western states, the football and volleyball games were scheduled together, with the volleyball match taking place just a few hours later in the gym. Apparently, Weldon Valley is very good at Volleyball. Even the road leading up to the school was painted with the names of all the volleyball players, along with cliche phrases and terms from volleyball games. Noticeably missing was any remarks about the football players or team.

The night game, though, was a reminder of just how small some towns are. Wiggins may be 11-man, but it may not be for long.

Today I'm in Wiley, Colorado for an afternoon 8-man game between the Wiley Panthers and Holly Wildcats. #39 @PaFootballNews #BeyondTheKeystone pic.twitter.com/c0C4r3bAVA

The next morning, it was a nearly three hour drive south to Wiley. A small stopoff on US287 between Eads and Lamar, just a few miles north of US50 where the field sits right along the road. A huge edifice was erected, proudly proclaiming the town and its teams to all those passing by.

In lieu of tickets for the afternoon contest between the winless Wiley Panthers and middling Holly Wildcats, a donation was requested for cancer research.

The one thing about Wiley Field is the field. It’s not grass. It’s some type of very short brush. Like the tendrils of a tumbleweed, just shorter. It was like walking on an incredibly dry and shattered sponge. It wasn’t soft. But it gave to your feet. Where regular wear happened, it was basically a mash of dead remains crushed into the hard Earth. Where it was less worn, it felt like running your feet along one of those rough welcome mats meant to clean the soles of your shoes.

Yet, in spots, somehow, was grass. Actual green grass. In small patches. Some along one sideline. Down one of the line markers. In a spot here or there. And given the washed out brown color everywhere else, the small patches of flat green blades of grass was really startling.

Like the six-man game the day before, Holly came out and put on a clinic. The scrambling of the quarterback kept plays alive long after they should’ve fallen apart. The tackling efforts of Wiley defenders was inconsistent at best. And it saw Holly post a hefty lead after only twelve minutes.

Holly got the running clock going in the third quarter, though the home-standing Wiley Panthers did manage one touchdown with about 7 minutes remaining to make it 43-6. But the running clock does not relent. And the game ended peacefully.

All in all, it was a fun weekend of Colorado. I’ll be in Colorado again this weekend, unless things change. But have yet to devise my schedule. It’s entirely open and probably subject to change anyways. 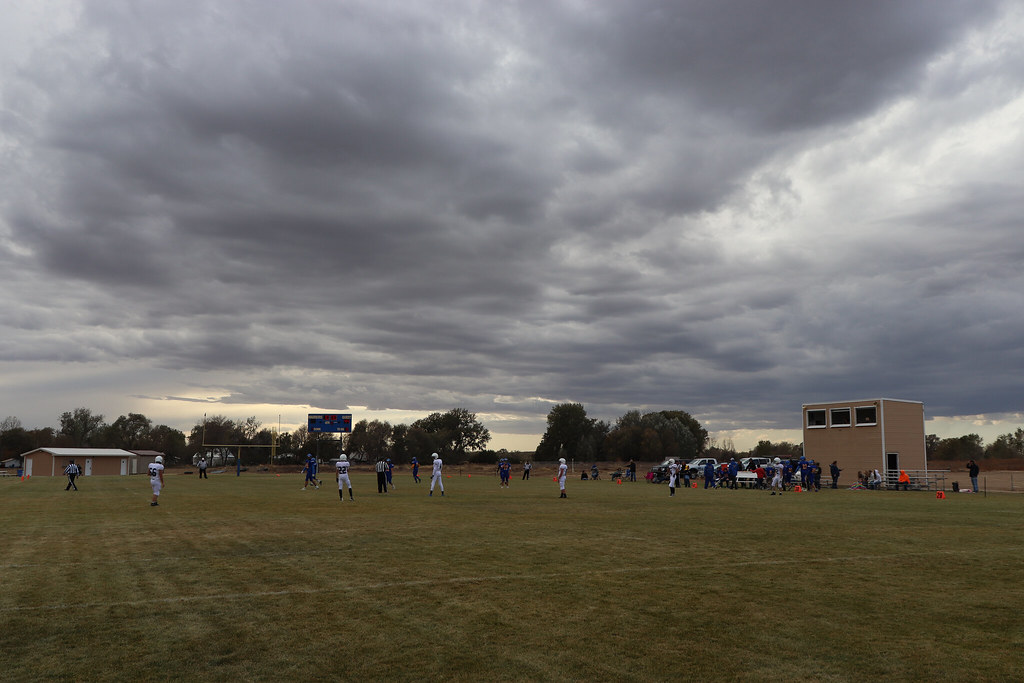 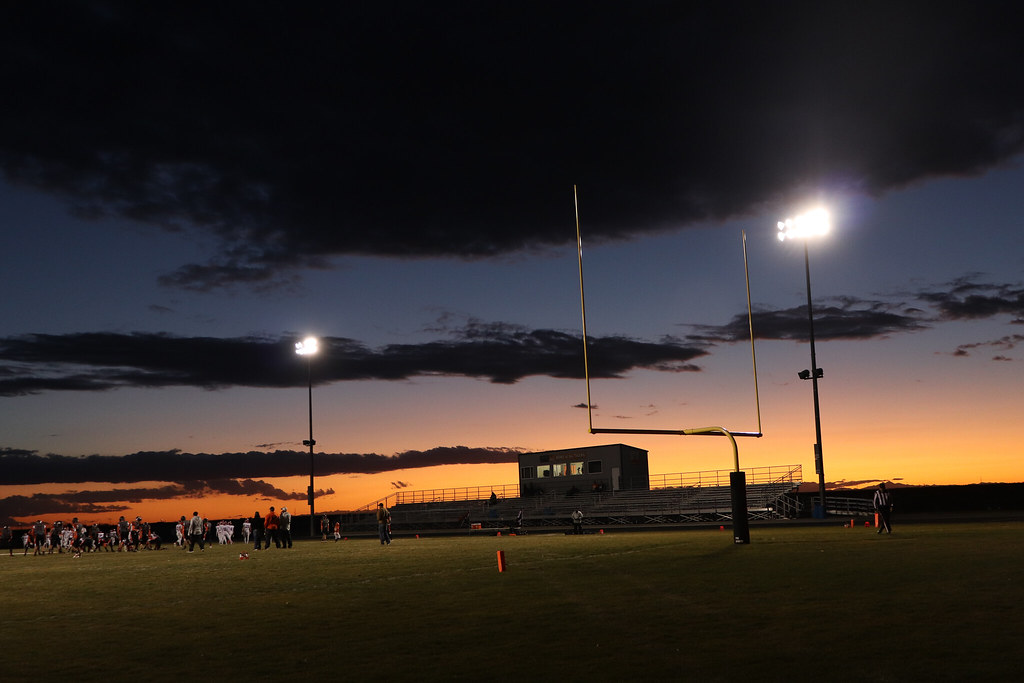 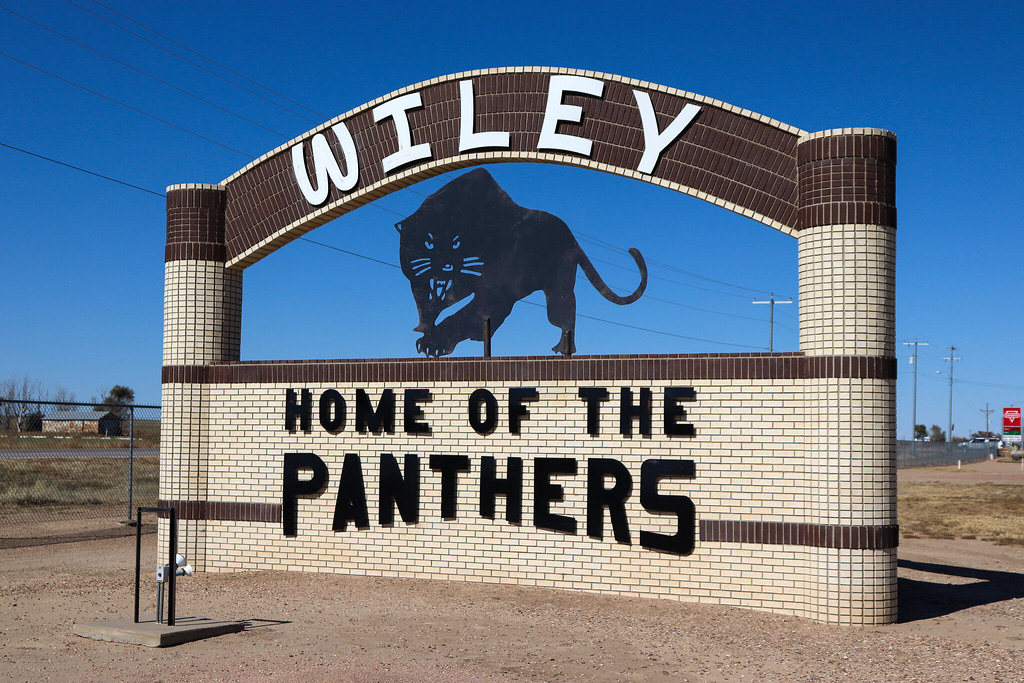 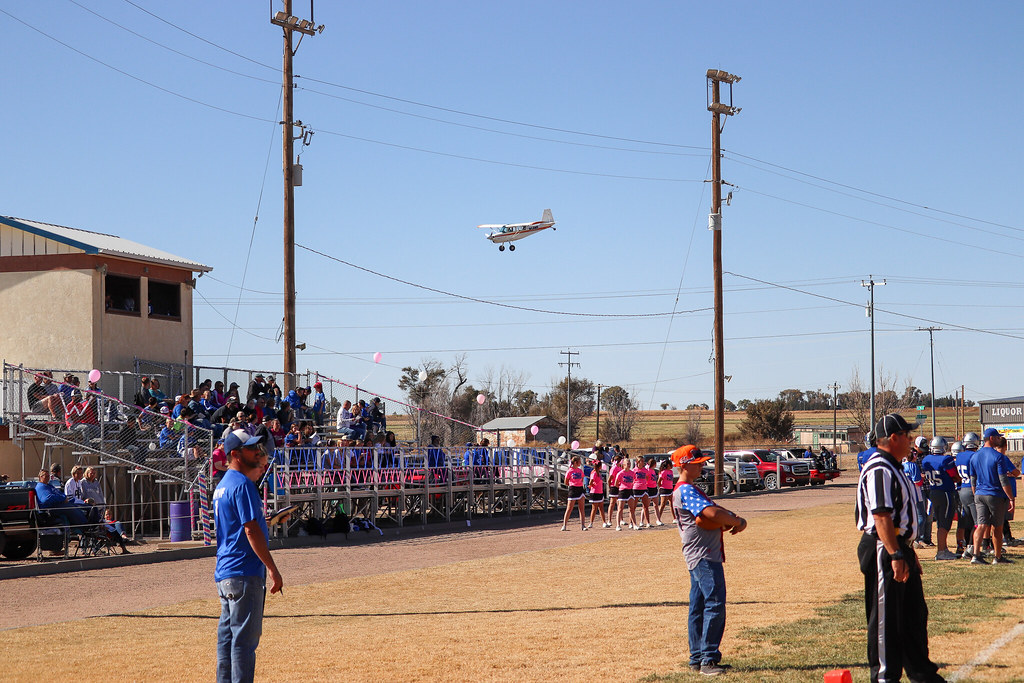 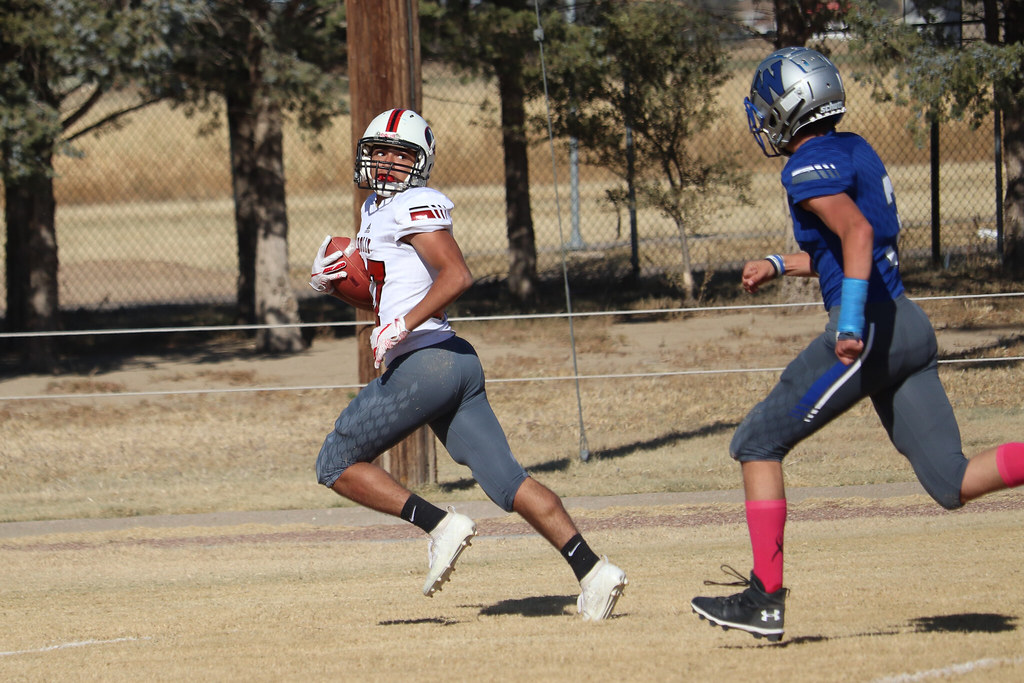 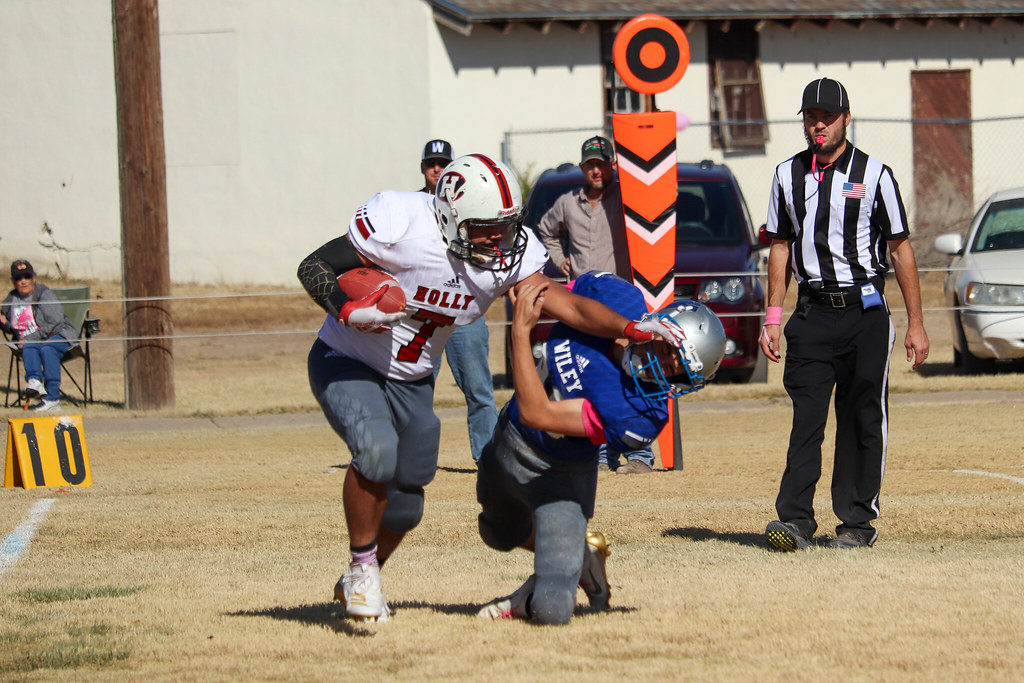