Week 3 was an interesting week. Memorable for the places I did get to go. And a bit surprising that it went exactly as planned in advance. No changes. Everything seemed to go off without a hitch. I returned to western North Dakota this week after a few days in Texas and planned to enter Big Sky Country for a rare Thursday game the furthest northeast reaches of the state, and a Friday night contest along the Hi-Line.

Montana is an interesting state for football. Though, like a lot of the midwest, high school football is almost specifically always on Friday. Except for those small outposts without lit fields hosting on Saturday afternoon. And sometimes, like in Wyoming, on Friday afternoons. Those being schools, primarily, that only have school four days a week.

Today I'm in Plentywood, Montana for a game between the Plentywood Wildcats and the Westby/Grenora MonDak Thunder. Kickoff is at 6:30 MDT. #7 @PaFootballNews #BeyondTheKeystone pic.twitter.com/Dgs0fIIAe1

So, a Thursday contest was a surprise. Two, in fact. Plentywood, Montana is located at the intersection of route 5 and 16 in the far northeast corner of the state. It’s a small town in a valley alone a line of hills stretching to the north and east of town. Its name given by the plethora of trees in an area devoid of woods.

Plentywood’s opponent for the evening was the MonDak Thunder. A co-op located just east of Plentywood. Westby, Montana and Grenora, North Dakota combined to form the MonDak Thunder in most sports years ago. Including six-man football. An option not available at the time in North Dakota. But, the co-op with Westby, a border town literally straddling the border, gave Grenora an in-road to playing six-man football in Montana.

Though, after years of continued success, the MonDak Thunder were elevated from C-6 to C-8. This gave them more local competition as Plentywood, Scobey/Ophreim, Culbertson, Fairview, etc are eight-man.

I arrived in Plentywood quite early on Thursday and got a chance to walk around town and take in the small prairie town’s core. Main Street runs from route 5 to the county courthouse. And the high school sits beside the courthouse. The stadium sits behind the school to the north, just before a small, formed ridge dominating the northern vista. The home stands climb the hillside to the west. Bleachers above a short wall, with a small, unused, outbuilding, followed by a long row of currently unfinished steps to a small press box at the top of the hill. Surrounded on both sides by cars giving comfortable views of the entire field. The visiting stands are literally just that. They can stand. There are no bleachers or seats.

The field only has four light standards. A small concession stand exists at the gate behind the school. Which includes new, but doorless, restrooms. As much of the midwest, there is no programs, but one-page roster sheets are provided for free.

The game itself was aired live, and streamed, through NEMONT.TV, a local provider of the area covering northeastern Montana. The field, in Plentywood, had no signage detailing a name, but was told by a coach that it is Lincoln Field. It took a moment after looking at google maps to realize that the field sits at the end of, after passing between the school and courthouse, Lincoln Street. Plentywood having many streets named after former presidents. Founded in 1912, the town had ample opportunity to come up with street names that way. And, unironically, the names of many trees.

Kickoff was set for the slightly odd-sounding 6:30pm kickoff. Which makes sense when you consider though Westby is in Montana, Grenora is in North Dakota and northwest North Dakota is Central Timezone. Meaning it is a regular 7:30pm kickoff for them. A middle schoool game was scheduled for 4pm. But upon arrival, it was confirmed the game was cancelled due to lack of players by MonDak.

So, a thorough practice by Plentywood’s younger squad gave way to the start of the varsity game. Though, MonDak quickly jumped out to a lead they wouldn’t relinquish. Not once missing a beat. The lighting was difficult to photograph after the sun had fully set. But, still managable. A 32-8 halftime lead setup a running clock once it hit 35 points. MonDak 58, Plentywood 14.

After the game, I drove down to Culbertson to hang out for the day and taken in the town. Culbertson is located along US2, which is called the Hi-Line. A title coterminus with the rail line that follows the same route whose name derives the highway’s title. The high school sits in the middle of town along US2, while the city park, C-C Field, sits across the sstreet to the north. Also in the center of town is a gas station and two restaurants. One being the Wild West Diner sitting right next to, and sharing a lot, with Scoops. Though, for the Labor Day weekend, the diner was closed. But Scoops, a burger and ice cream stand was open and quite packed.

One of the best thirteen dollar bacon double cheeseburgers you'll ever have. #roadtrippin pic.twitter.com/4fXWVbPOGD

I got a bacon double cheeseburger and a ‘cyclone’, which was an offbrand name for a blizzard. I got to spend an hour or so listening the table of old guys next to me talk about anything and everything. From the opponent, to the game, to politics, to the weather, and back to politics several times in the sixty or so minutes.

The stadium itself is part of the park. The football field is to the west, while the baseball and softball fields are butted against the eastern edge and backed against route 16 from Plentywood, and the corner of US 2. Also, there is a small playground and the lone restrooms of the entire facility are to the far eastern edge of the park.

The stands for the home side are new, elevated, and very tight to the sideline. Very little space between the sideline and the fencing of the stands. A gravel track surrounds the field and behind the stands. An old concession stand sits behind the track against the outer fence of the facility.

Ask, and ye shall receive. pic.twitter.com/1fTGfX8MpO

There, the go-to item is the Pizza Pretzel. It’s a packaged frozen pretzel that is made of pizza dough and filled with marinara, cheese, and chunks of pepperoni. Heated up, it was crumbly and delicious. Like a pizza roll, but far less greasy and dipping in nacho cheese just made it work well.

After the junior high game ended with the homeside winning, 50-20, the two teams assembled to get ready for their game. Fairview, the Warriors, were defending C-8 champions. Fairview, like Westby, sits right on the border of North Dakota along SR 200. The town sits squarely in the oil patch and booming like the other towns in the area.

In the second quarter, Culbertson managed some bit of offense to hold the ball and Fairview only scored once. A two-point conversion left them one point away from a running clock at the half. But, two more touchdowns got the running clock underway and a scoreless fourth quarter finished with Culberston desparately trying to score as the clock ran out deep in the redzone. Fairview 48, Culbertson 0.

After the game, I did learn something I honestly should have figured. The field was C-C Field, and I first though, Cee Cee Field, was the proper pronunciation. But, knowing where I was should have figured out the etymic name. It’s pronounced Cee Bar Cee Field. A common term in cattle branding that a dash is always pronounced Bar. Usually in relation to the brand insignia.

After Culbertson, there were a few Saturday afternoon options, but I had settled on the lone Saturday game in western North Dakota. In Montana, there were games in Medicine Lake, Wibaux, Grass Range, and Rudyard. And some others. The one I wanted to, originally, was Wibaux, who were hosting Savage. But, the distance between Culbertson and Wibaux and back to Williston was just a bit far. Especially since I saw Savage host Wibaux last season in Savage.

So, I stuck with my first idea of something new: Alexander, North Dakota.

This afternoon I'm in Alexander, North Dakota for a six-man game between the Alexander Comets and Drayton Bombers. Kickoff is set for 3pm Central. #9 @PaFootballNews #BeyondTheKeystone pic.twitter.com/ZhESrCBsrv

Alexander is a small town along US85 between Williston and Watford City. In less than ten years, the town has nearly doubled in size due to the oil boom. Construction is everywhere as all the streets around the school are being redone. including large mounds of dirt along the north endzone.

Unlike Grenora, Alexander plays six-man football in North Dakota as an independent. Only six schools currently play six-man in North Dakota among themselves. Last year, a title game was held in Watford City. Due to the years of co-ops to form 9- and 11-man football teams in North Dakota, six-man football hasn’t seen the explosion of teams breaking former co-ops to have their own teams. Just as MonDak is an entrenched co-op, many others around the state are so part of landscape that schools simply don’t want to break out of them.

At 1pm, the junior high teams were set to kickoff with a varsity contest set for 3pm. Though Alexander is just southwest of the Missouri River, it is still central time. Luckily, I didn’t make the mistake and arrive late.

The field itself has little in surrounding fencing. Like other six-man fields, a simple rope slung between posts along each sideline delienate the gap between sideline and fans. The field runs north to south away from the school, with home fans to the east lining the sideline with their vehicles to tailgate from, or setup lawn chairs and line the field to watch the game in comfort away from the few small metal bleachers.

At midfield, there was a short bus and a small tag along trailer setup as a makeshift press box. A cameraperson perched atop the bus. A concession trailer was setup to the southeast corner selling candy, drinks, and some hot foods it appeared. The scoreboard was the nicest and most permanent structure at the field, was to the northwest.

For the game itself, Alexander and Drayton struggled on offense early and only one touchdown for the first ten minutes. The Alexander Comets, whose logo resembles the Alabama script A, scored twice more in the second while conceding a safety on a sack in the endzone for an 18-2 lead. Alexander received their own two points via safety after a bad Drayton snap, and a few more TDs to go up 33-8 late in the game. Drayton, in desperation, scored on a 40-yard TD pass, while Alexander answered with just a few seconds later with their very own 40-yard TD pass. Alexander 40, Drayton 14.

Drayton, who were the Bombers, are listed on the NHDSAA site as the Titans. A discrepency that wasn’t quite explained. After the game, it was announced over the PA, that this was Alexander’s last varsity home game. It was senior day, but under COVID, many schools had scheduled Senior Day or Senior Night for an earlier weekend to ensure it gets completed without an unforeseen concellation that might curtail things.

As for personal events for the week, I have some thoughts that I’ve decieed not to share regarding one of the schools. And that wasn’t even the worst thing. At one of the Montana schools, I heard a rather obvious, and repeated, slur used offhandedly by a particular person. I won’t name what was said, but you can figure which bigger slur I might be referencing. Really is a shame to tamper such an otherwise wonderful weekend of football. 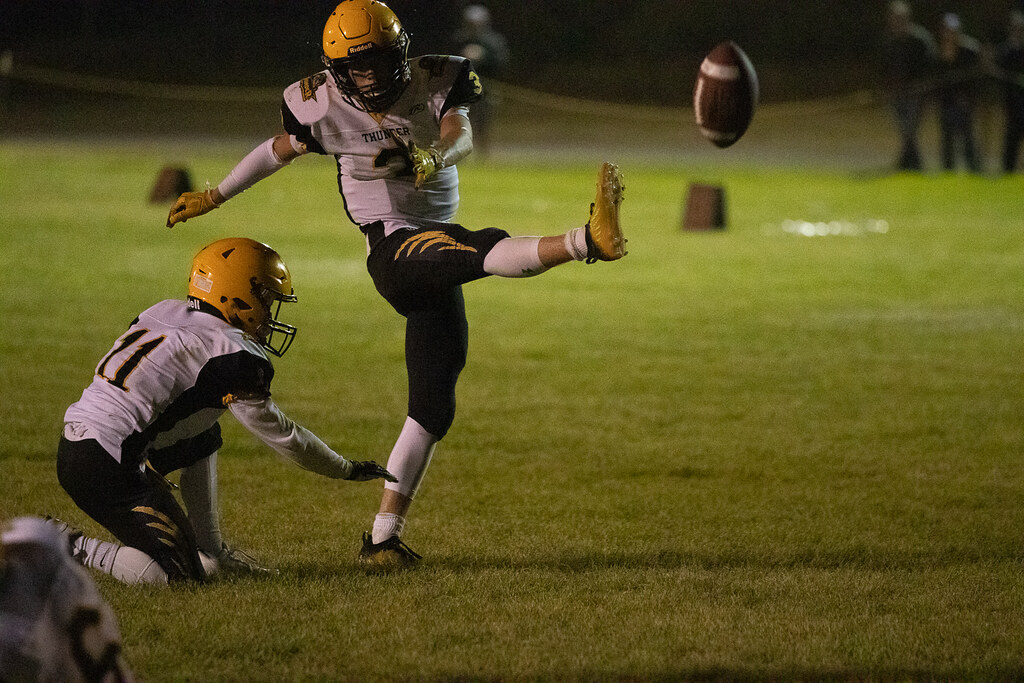 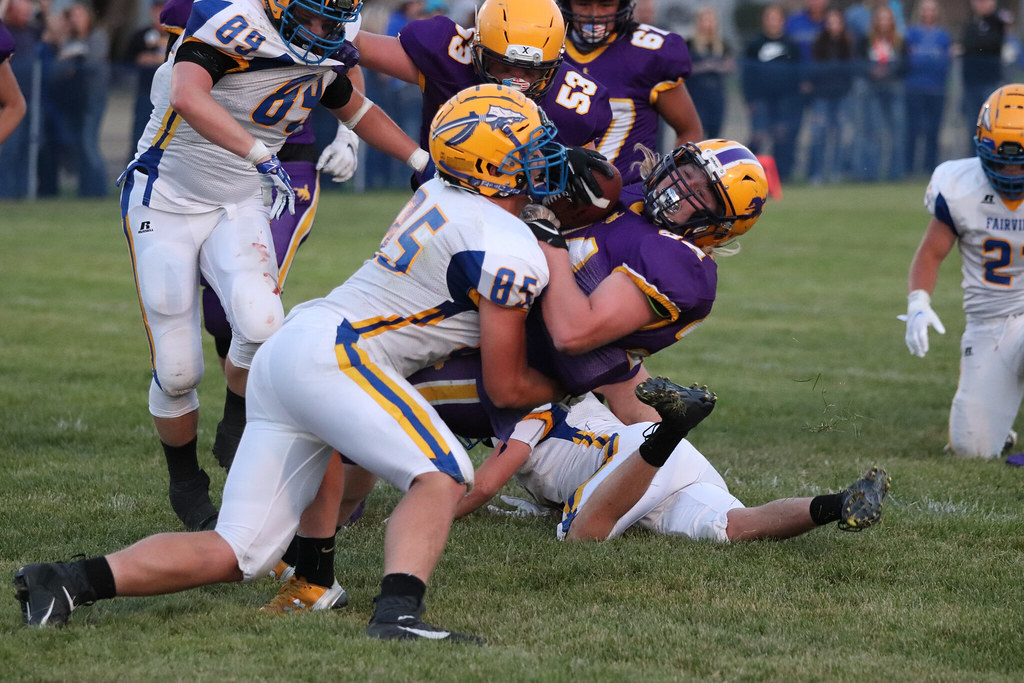 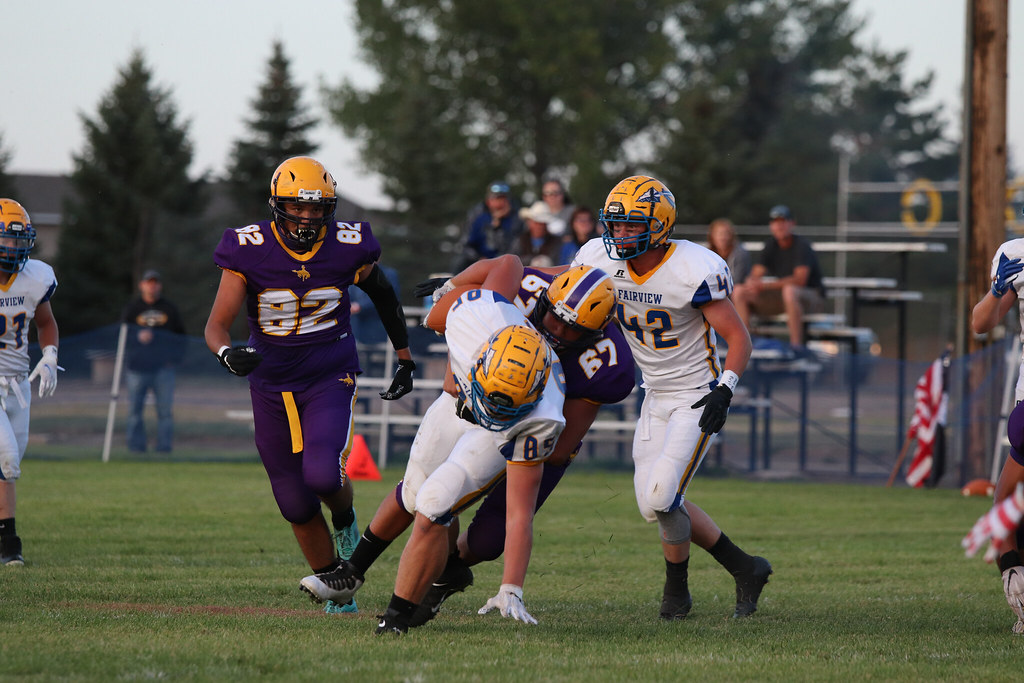 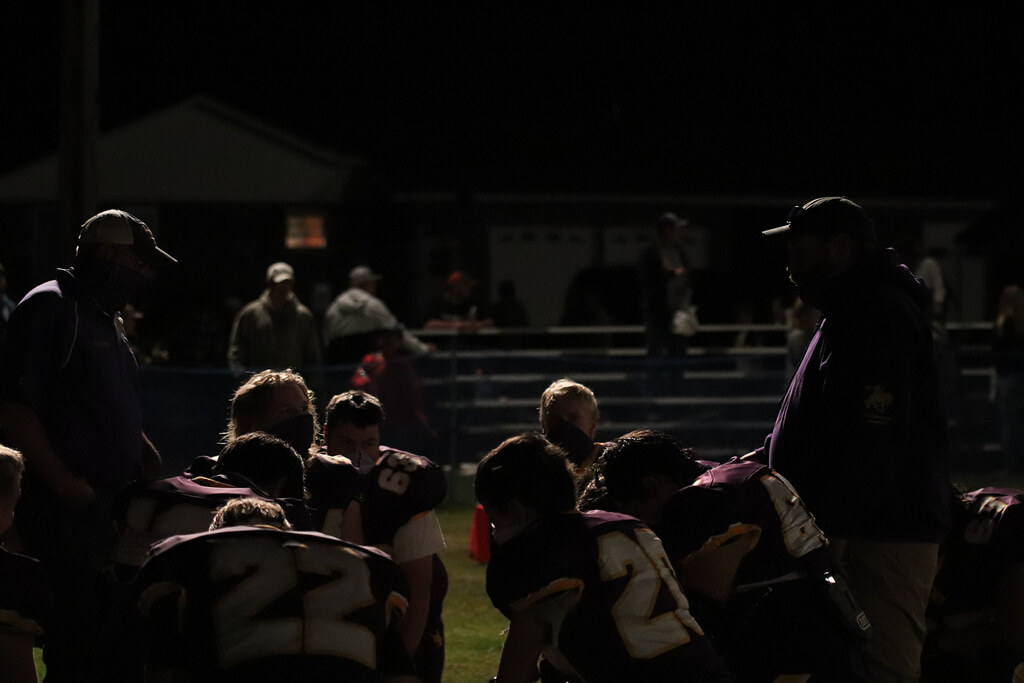 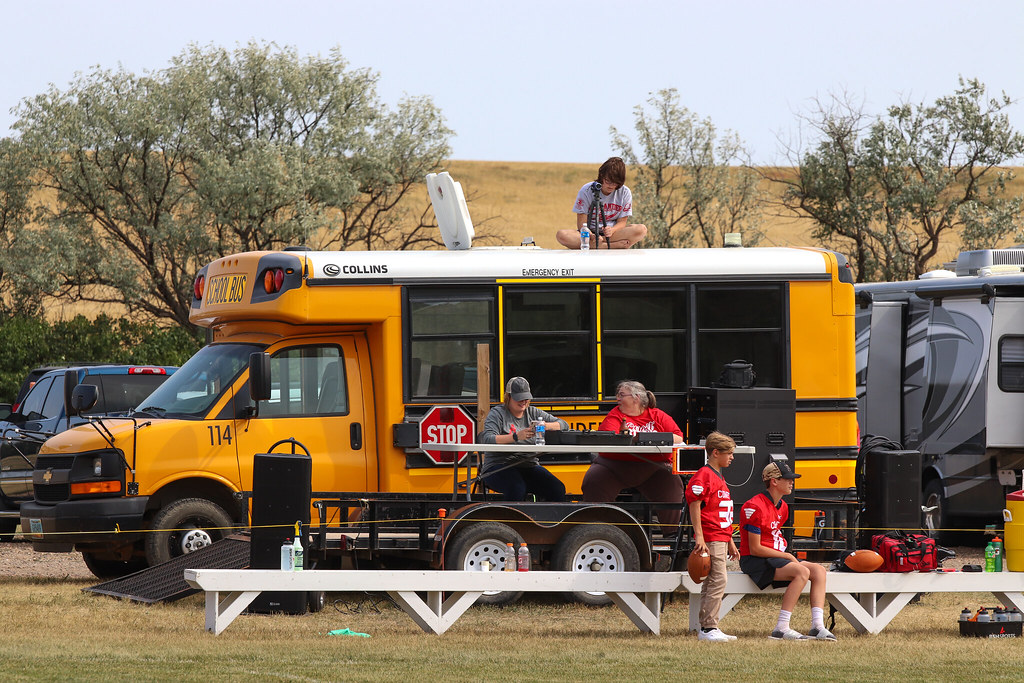 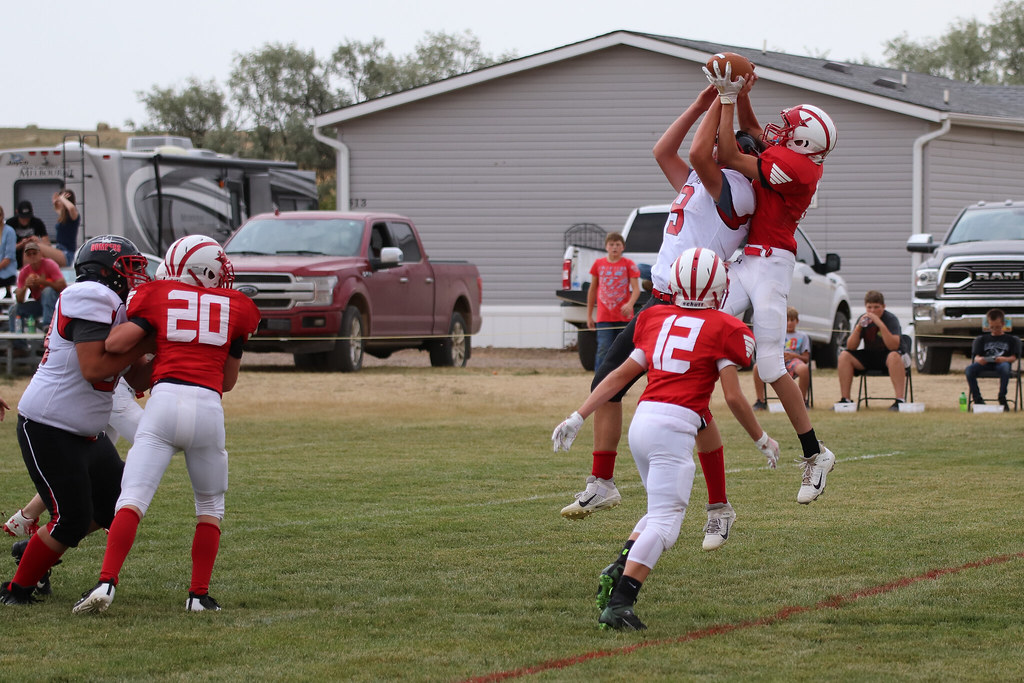 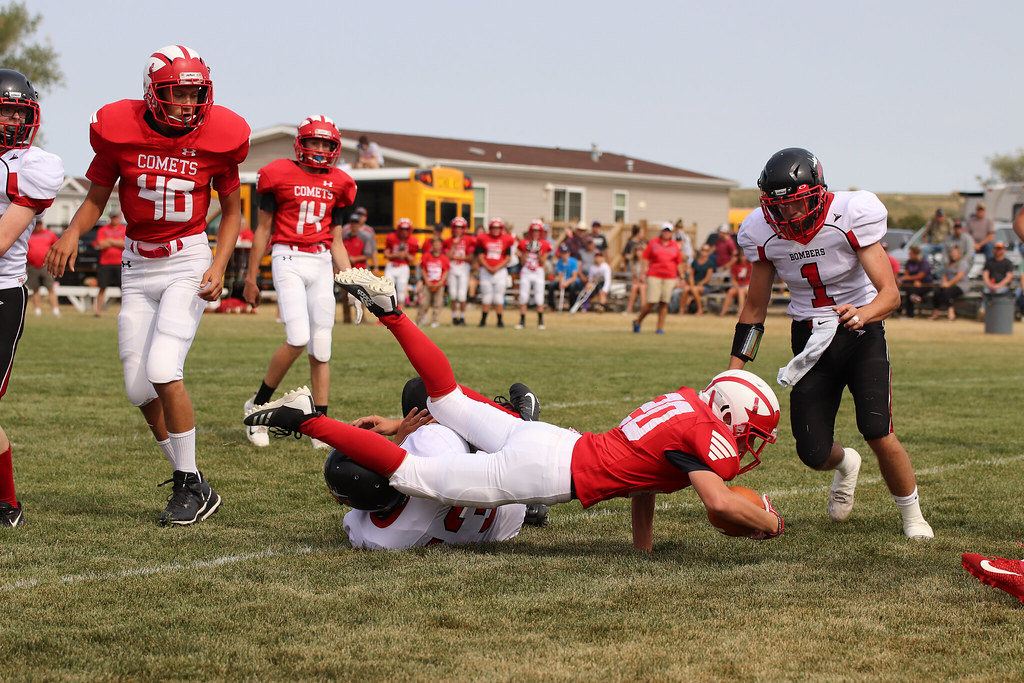 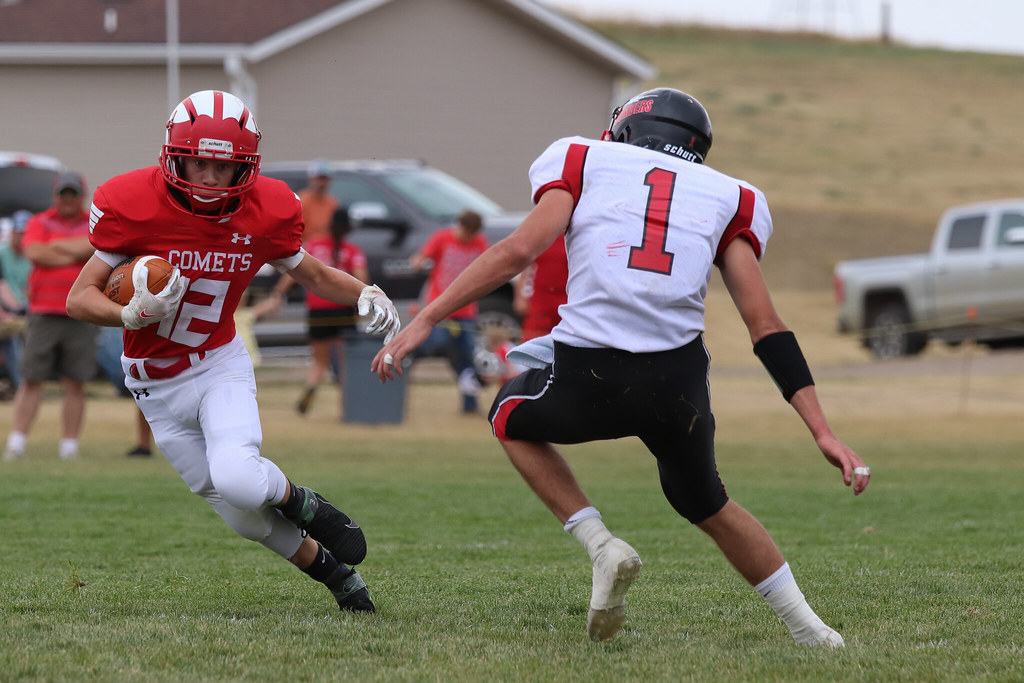 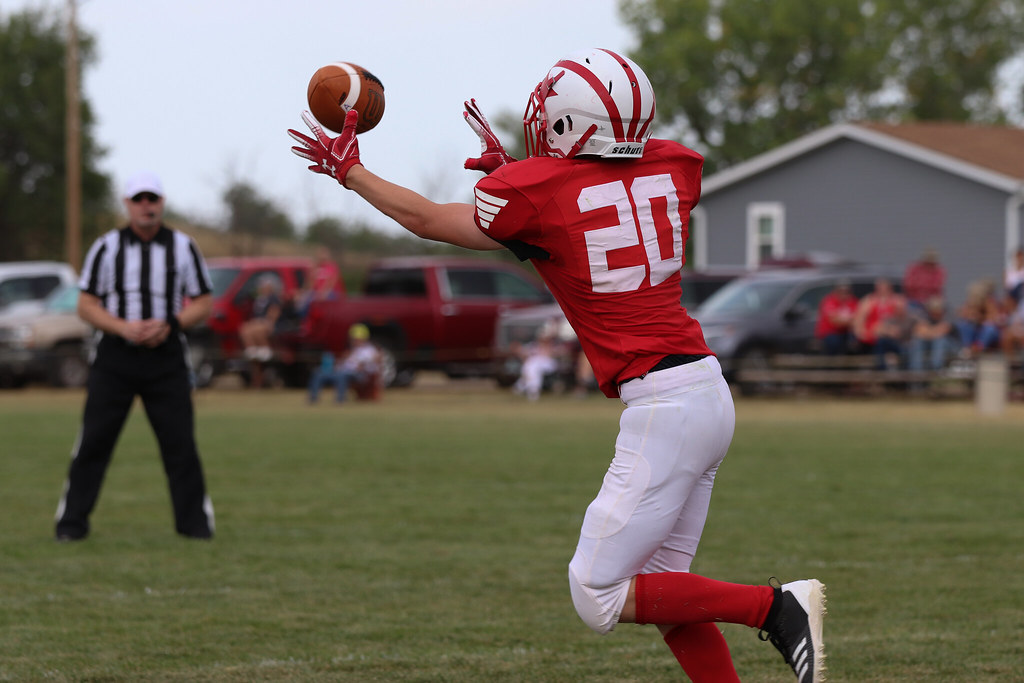 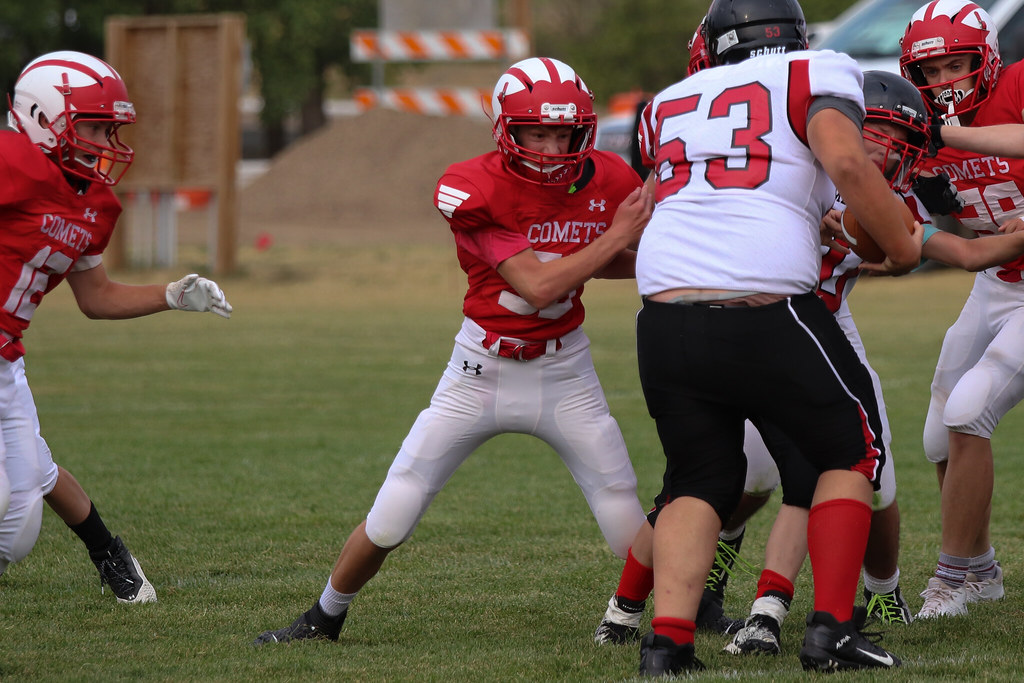