Earlier this season, I had seen games around the western states of Utah, Montana, North Dakota, and Texas. And, at the time, I had assumed that once I returned to Ohio, that I would stick to Ohio and Pennsylvania through the remainder of the season until any later trips.

But, then this week happened. It started without me seeing any really specific game I wanted to cover. So, it was just going to be proximity, and whichever games around Pennsylvania were open. Or, rather, not yet claimed by another reporter or photographer.

So, my alter ego realized, if I went to Colorado, I would make a small boatload of money and figured, why not? If I was going to see a game anywhere, I wanted to see a game in St. Francis, Kansas. A small Class 8-Man, Division II school. Located in the furthest northwest corner of Kansas, it’s a town I’m quite well acquainted with. Located on US36 (the Pony Express Highway) at the intersection with State Route 27. It’s just a few miles west of Bird City. Bird City is an even smaller town in Cheyenne County, the home of Cheylin HS, who play in the still developing six-man league in Kanas. And won the state championship in that level.

St. Francis came close last year. Earlier in the year, they played a game at Dighton on a Thursday night that I had missed out on. Instead, I went to Wichita for the Southeast v. North game. A few weeks later, I had the opportunity to cover their Friday night home game, but the rate that St. Francis wins, means that the games end early. Because in Kansas 8-man, a team leading by 45 points after halftime ends the game. And I figured the game would end early. So, instead I went to Ellis and saw the Railroaders host the La Crosse Cougars.

And in the state championship in Newton, St. Francis jumped out to a 36-0 lead over Canton/Galva. Only 9 points from a halftime victory. And then it happened. Touchdown after touchdown. And before it was all over, St. Francis would give up 66 straight points to end the game. Losing out on their first state championship, 66-36.

And this year, they’re in a tear. Of the 9 games they’ve played, 7 were by 45s, and the other two were via forfeit.

But, St. Francis didn’t play on Friday. They played on Saturday. A rarity in Kansas. So, it was looking for a Friday night game. And that led me to my goal of going to every stadium along US287 between Limon and Oklahoma. There’s only two left. Genoa-Hugo and Eads. Both were at home. It was just a matter of which game I wanted to do.

Genoa-Hugo is up close to Limon, and were hosting Deer Trail. A team located just off I-70. While Eads were hosting Cheyenne Wells, a team east of Kit Carson in Cheyenne County (Colorado).

This afternoon I'm in Eads, Colorado for a 6-man game between the Eads Eagles and the Cheyenne Wells Tigers. Kickoff is set for 7pm local (9pm ET). #45 @PaFootballNews pic.twitter.com/jOkmOef0ug

So, I chose Eads. It seemed to be the better matchup.

Eads’ stadium is located at the north end of town as part of a sports field complex. A track and field is located behind a gas station along US287. While the combined baseball/football field sits behind it. The baseball field sits with first base along the east/west street, while third base sits along a north/south street. The football field then spans the outfield from pole to pole. This also gives a strange lighting setup, as the home side, which is along the outfield, has lights close to the field. While the visitor side has lights near the infield, far from the sideline, and two lits at each endzone corner.

The stands, both home and away, are minimal for the six-man field. The press box is a small elevated box perched above the 40 at midfield. The lighting, though, is quite bright. The PA is quite loud. It’s a well manicured grass field though it definitely is showing end of season wear already.

A Junior High game was going on when I arrived. I saw that it was scheduled, but wasn’t really looking to get there by 4pm for it. I did catch the last quarter, however.

For the varsity game, Eads had 13 players, while Cheyenne Wells had 12.

In the first quarter, the teams played a very conservative six-man game. A lot of set formations, and field position battles. Before, first play of the second, that Cheyenne Wells scored. They’d score three times. Eads would get on the board via a safety. They threw a deep pass that was intercepted at the 1. On the next play, Eads bullrushed the offensive line, stuffing the ball carrier several yards deep behind the goal line.

However, they’d score their own TD on a kickoff return. Their only offensive touchdown of the game would come with just two minutes remaining with the result no longer in doubt. Cheyenne Wells would extend their lead to 42-10. With Eads have trouble moving the ball all game, it wasn’t a surprise that Cheyenne Wells would relax a bit to kill a lot of time. They’d hang on for the win, 42-18.

After spending the night in Eads, it was a 2.5 hour drive northeast to St. Francis for their game. There were a few Saturday afternoon games in Colorado, such as in Flagler or Seibert. But, once I saw St. Francis with their game on Saturday, that was the only option. Plus, it would be a new state to cover for the season.

This morning I'm in St. Francis, Kansas for an 8-Man Division 2 Playoff game between the St. Francis Indians and the Bucklin Red Aces. Kickoff at 11am CT (12pm ET). #46 @PaFootballNews #BeyondTheKeystone pic.twitter.com/nrMispR983

Now, I knew this game was going to be over early.

After several times missing a chance to see the Sainty Indians, I'm finally here at Greene Field in St. Francis, Kansas. Afternoon rarity for a Kansas playoff game. Looking forward to this one. Even if it might end early. #46 @PaFootballNews #BeyondTheKeystone pic.twitter.com/tWlVigkDm2

But, that wasn’t going to dampen my enjoyment of seeing a game in the high plains on a beautiful, though windy, fall afternoon. To follow-up a discussion earlier, Bucklin had their own coach to drive to the games rather than taking school buses.

St. Francis has a great field. The school and field sit in the northeast corner of town. Far from the thoroughfare of US36 running along the south edge of town. It sits north/south, where the home side is metal on a concrete slab. Nice, new, and fresh. The visiting side sits on a concrete angle, into the small hillside it runs along. Cars can park on the ends of the visitor stands. Some for standing and sitting on tailgates, while others were simply able to sit in their cars and have a decent view without the elements being involved.

The entire venue is decked out in green and yellow. Flags, banners, advertisements, etc. All done up in team colors. The facade of the visiting side, above the track, has pained “SAINTY INDIANS” with two small logos at either end.

Another thing, is that the local ‘nickname’ for the team, aside from their nickname of ‘Indians’ is that they’re called, affectionately, the “Sainty Indians”.

The team setup a run-through complete with yellow and green smoke flares, however the wind quickly dissipated the smoke and the run-through was left permanently ‘opened’ due to the consistent gusts. After running through the metal aparatus that held the run-through banner, the team’s choir handled the anthem and the game got underway.

And it wasn’t pretty. For two reasons. With my camera broken, I was using the screen, rather than the viewfinder. And at some point–I’m not sure when–I bumped the autofocus from AI Servo to AI Focus. Which is not good for capturing a moving object.

So, for most of the first quarter, my autofocus wasn’t working how I thought it should be working. Which was confounding me. Meanwhile, St. Francis was bowling over the Bucklin Red Aces. I finally got it resolved with the camera.

St. Francis led 30-0 after one. Including a pick-six. The second quarter was more of the first. Bucklin players got frustrated. One, inadvertantly, chucked the ball underhand at high speed right at the official after a play. It may have been unintentional, but it was still a burst of emotion that was going to draw a flag. And then, compounding it when the player said something additional as he walked off the field.

But, St. Francis wasn’t slowing down. After getting up 46-0, and the halftime victory looming, and with the penalty, the next step was one more touchdown. The clincher. The two pointer put them nine points clear of the halftime margin. Securing their win as Bucklin, who had yet to move the ball affectively, instead saw the clock run out on their season.

Only 24 minutes was needed, for St. Francis to go up 54-0 and secure their regional round playoff victory.

After that, it was a 1200 mile drive home. A long drive home that I didn’t finish until Monday morning.

Now, for Week 14, I had planned to visit Iowa with a friend for their semifinals. But, due to Covid, it appeared that those games weren’t going to be feasible.

The weekend was only two games. Only 64 minutes of football (6-man play 10 minute quarters, and St. Francis won in the first half). But, it was a great weekend of football highlighting exactly what I love about football west of the Mississsippi and east of the Rockies.

I finally got to St. Francis, and hope to one day do it again. It’s a great place to see a game. And maybe one day see an entire game. 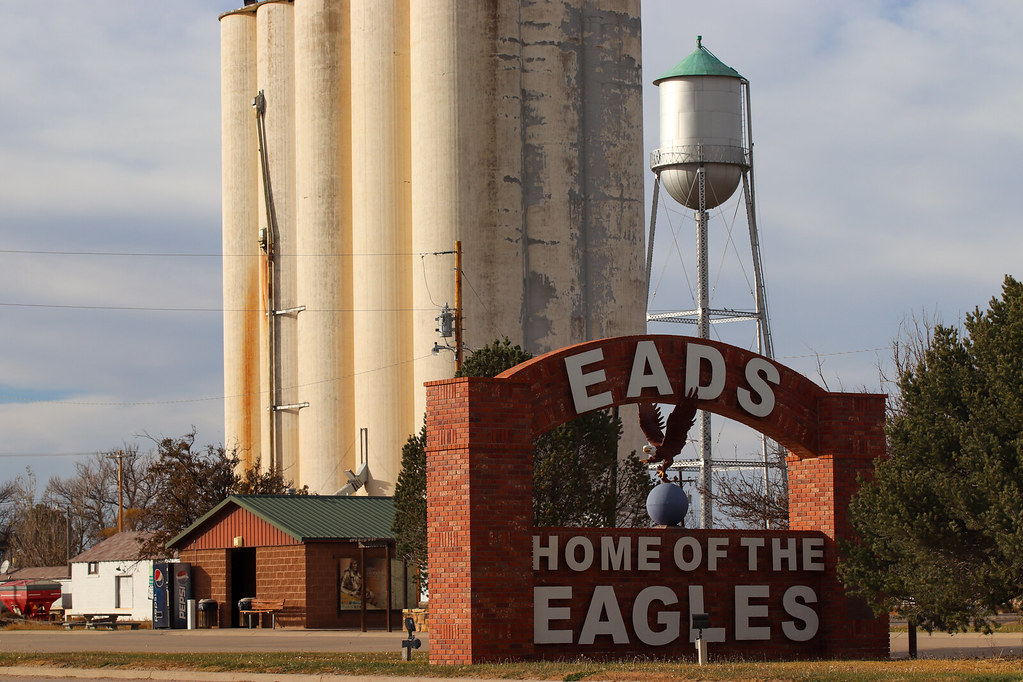 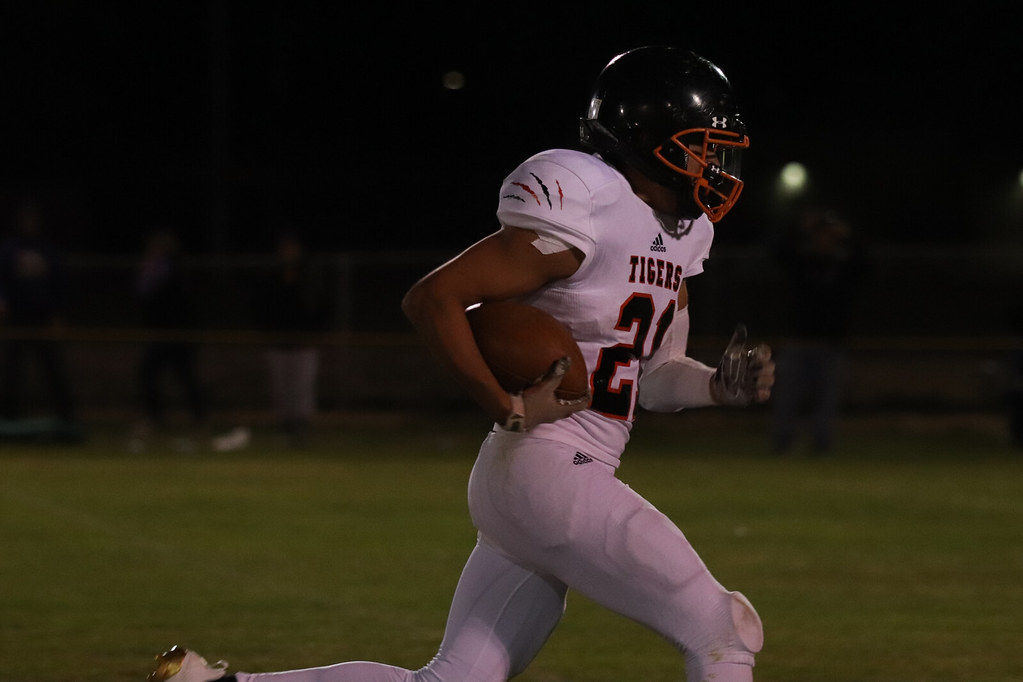 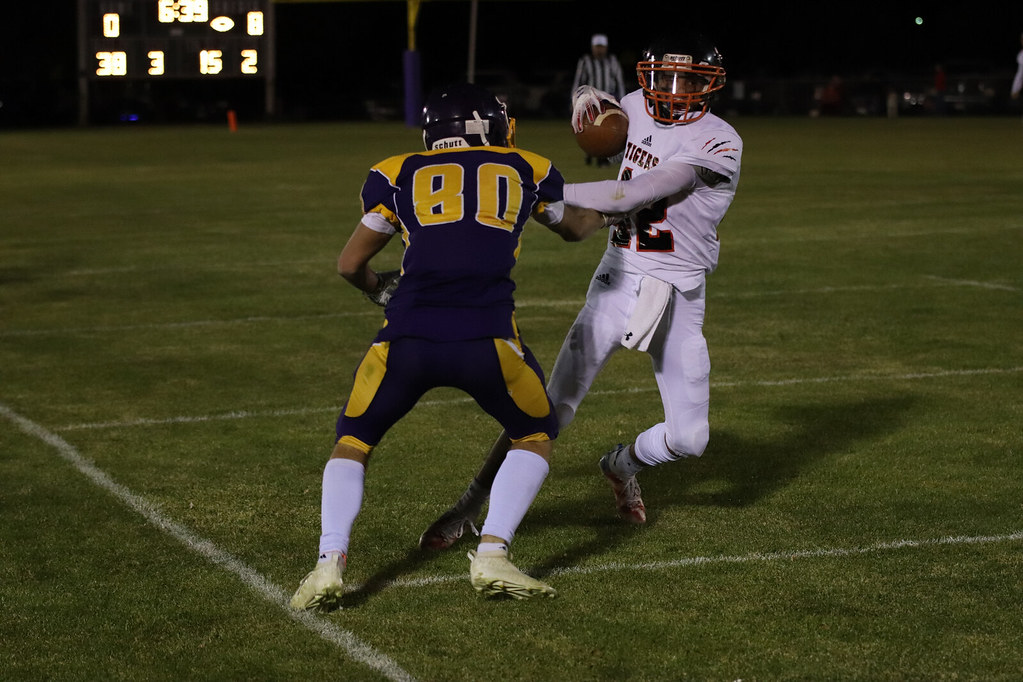 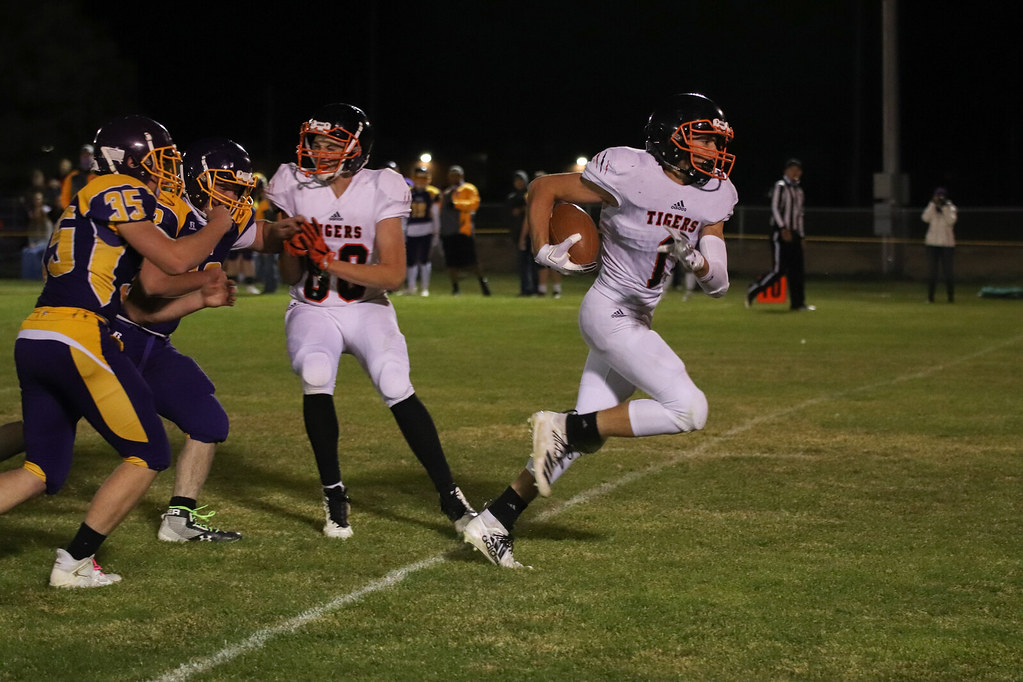 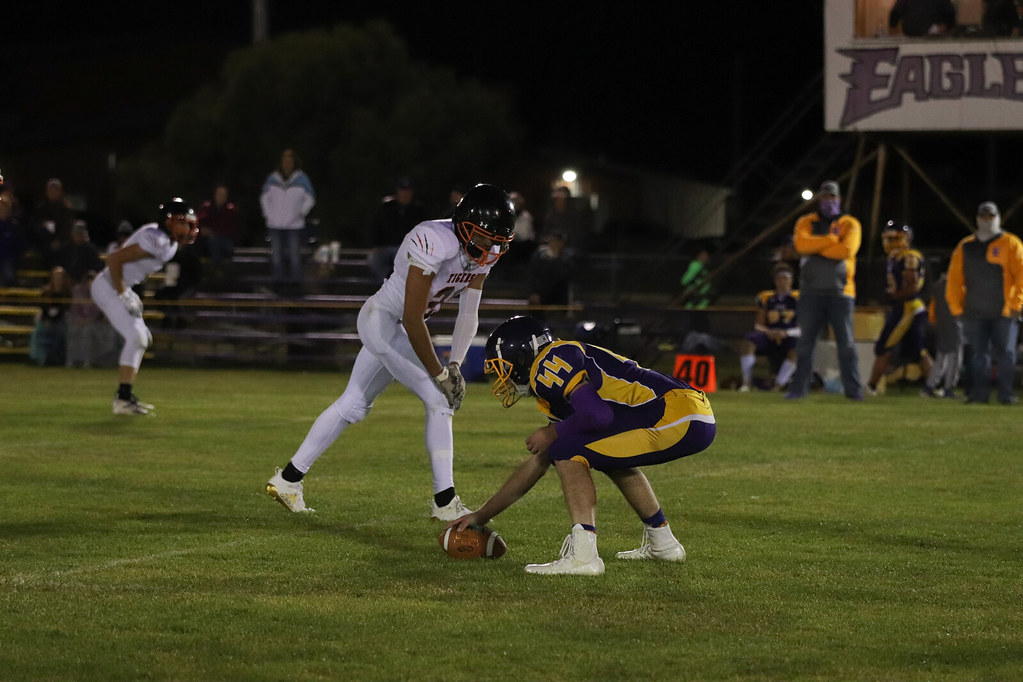 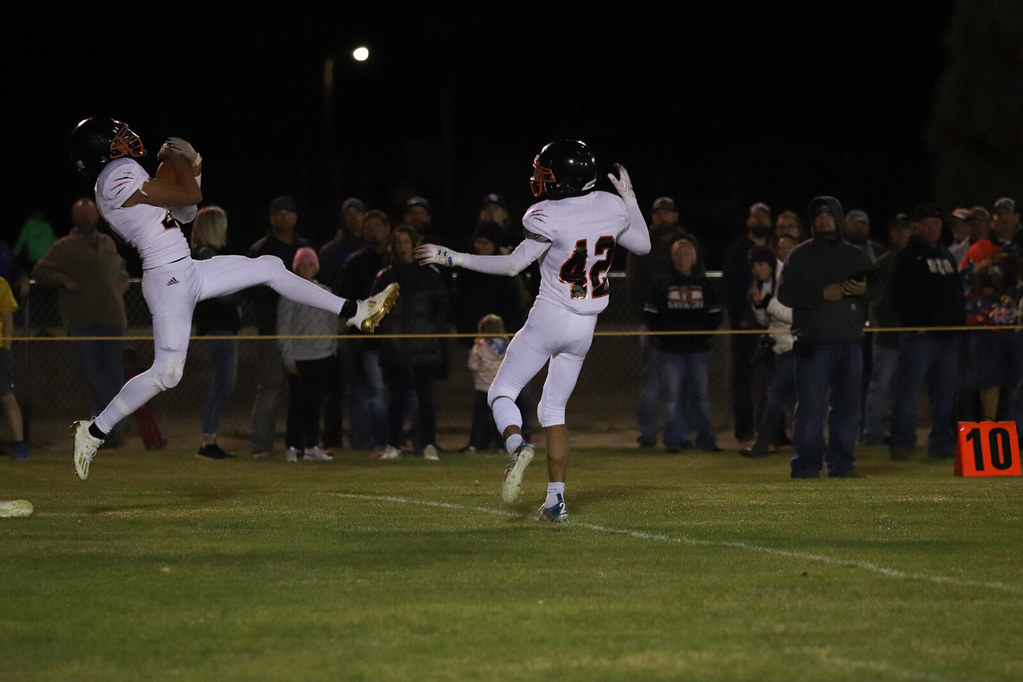 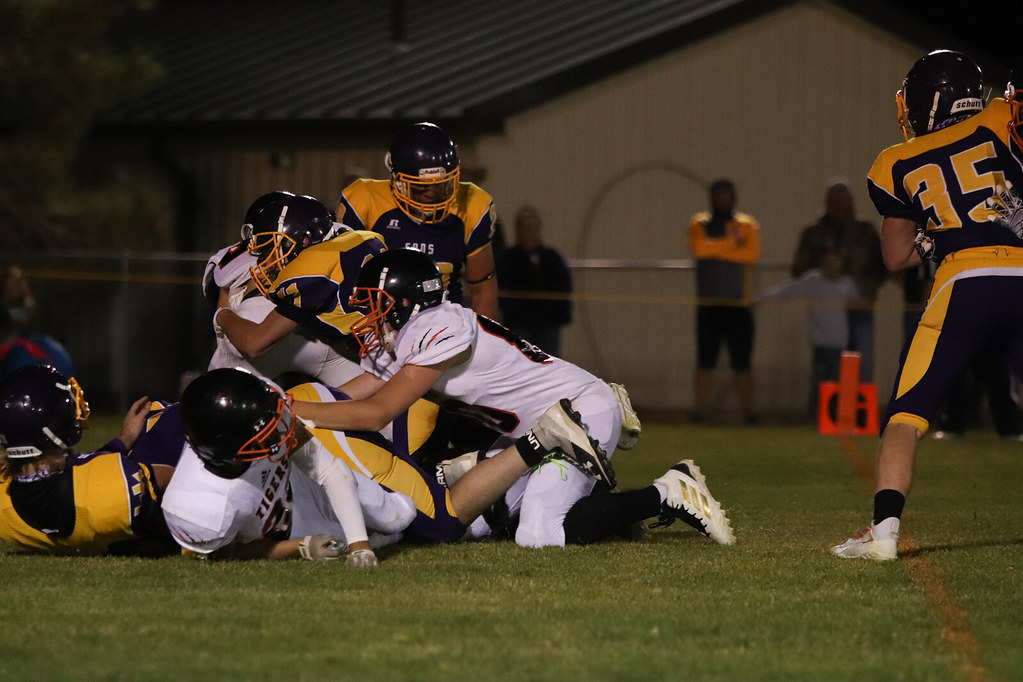 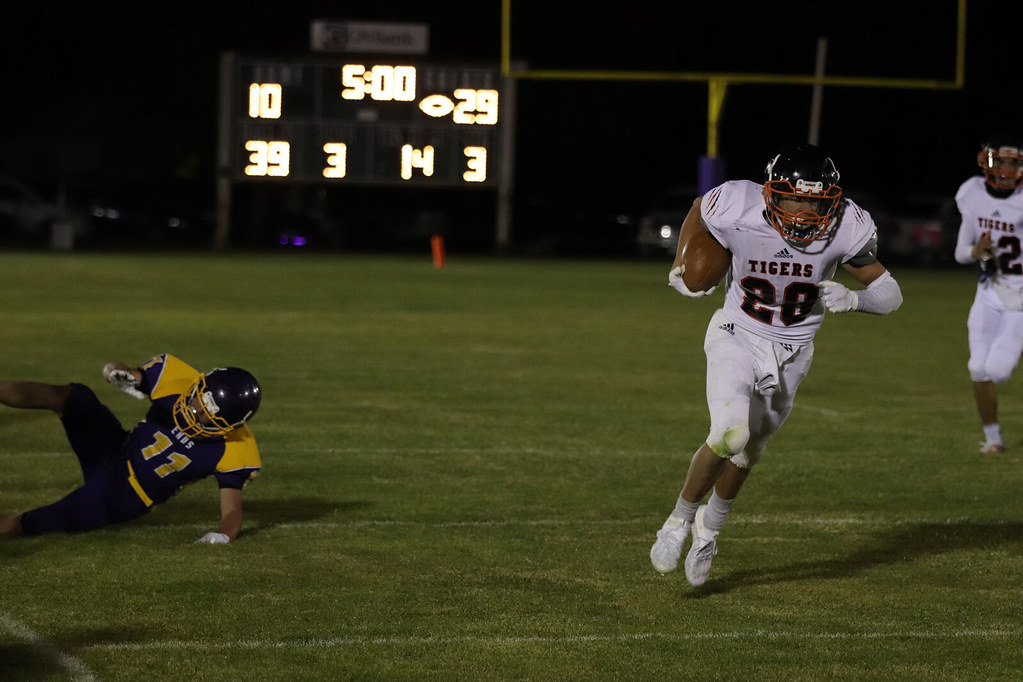 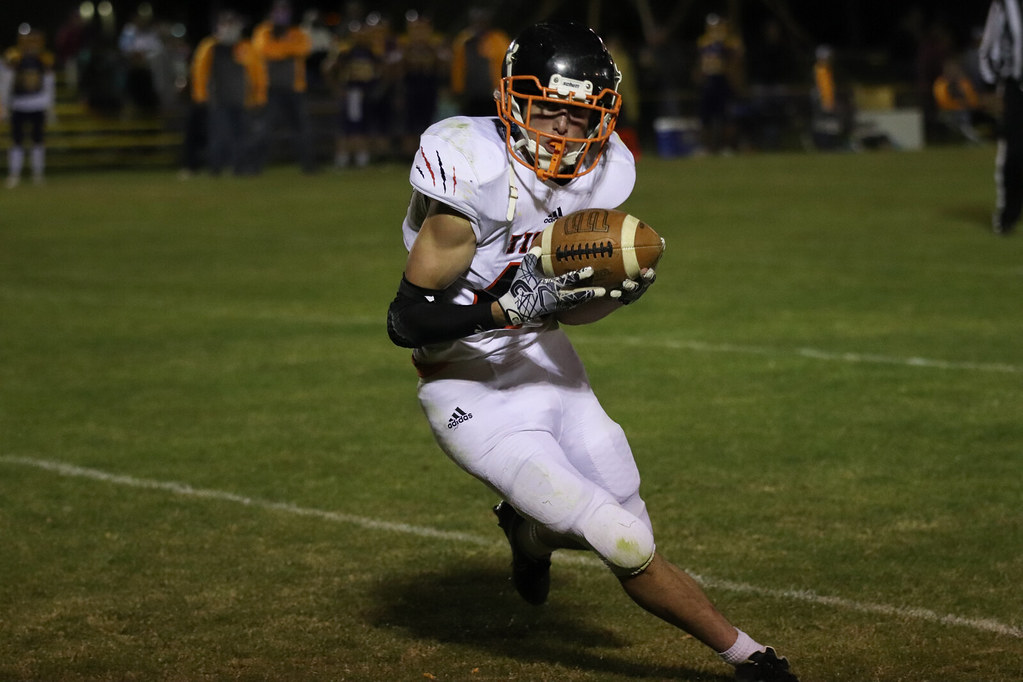 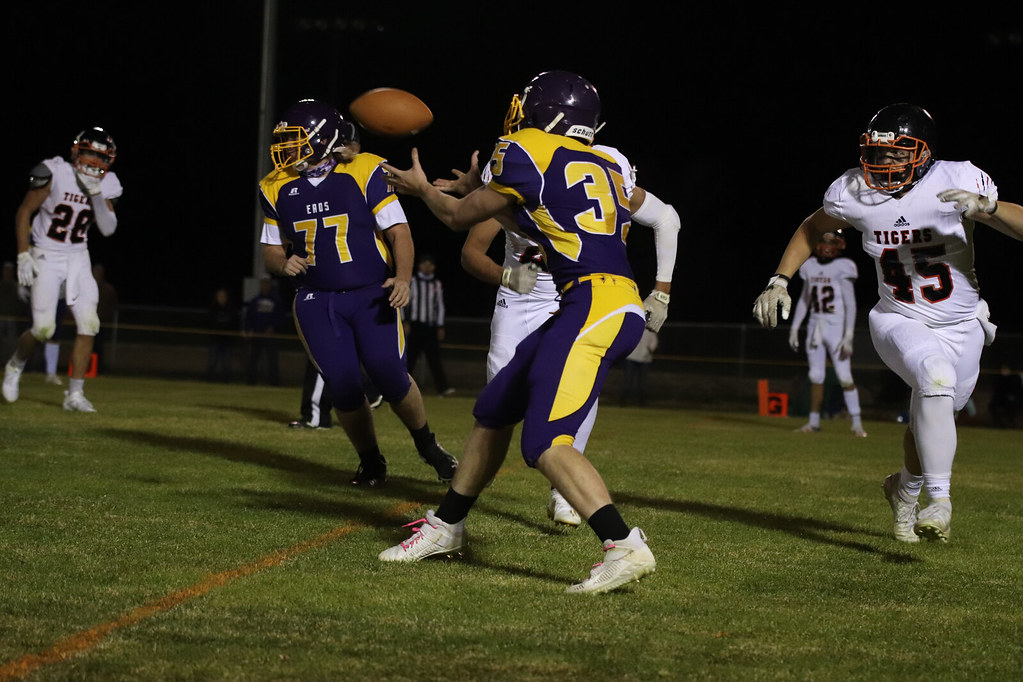 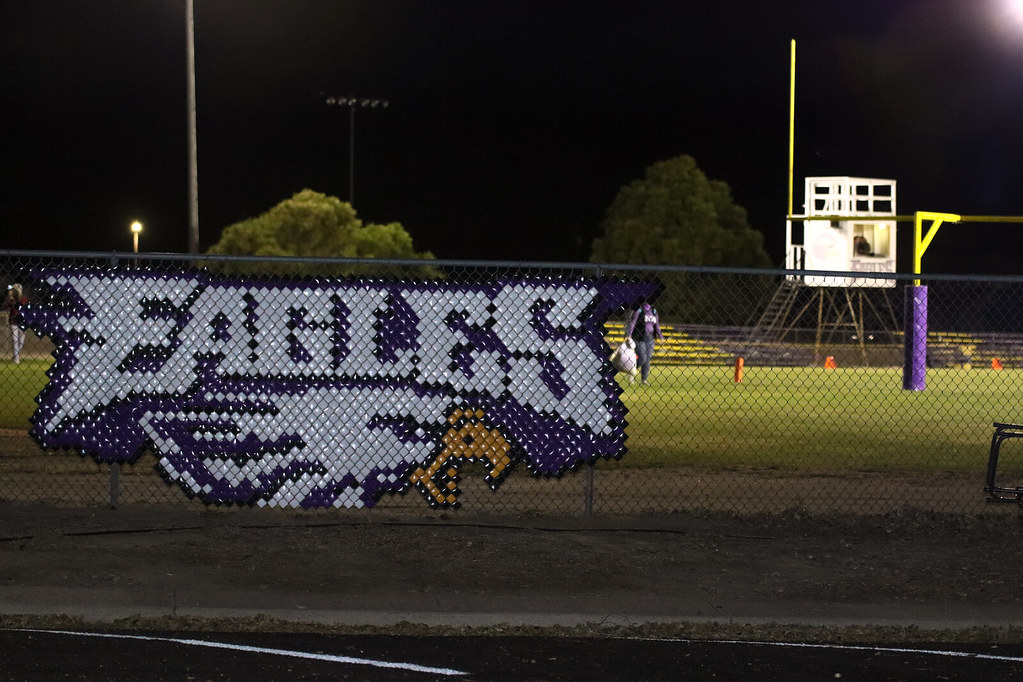 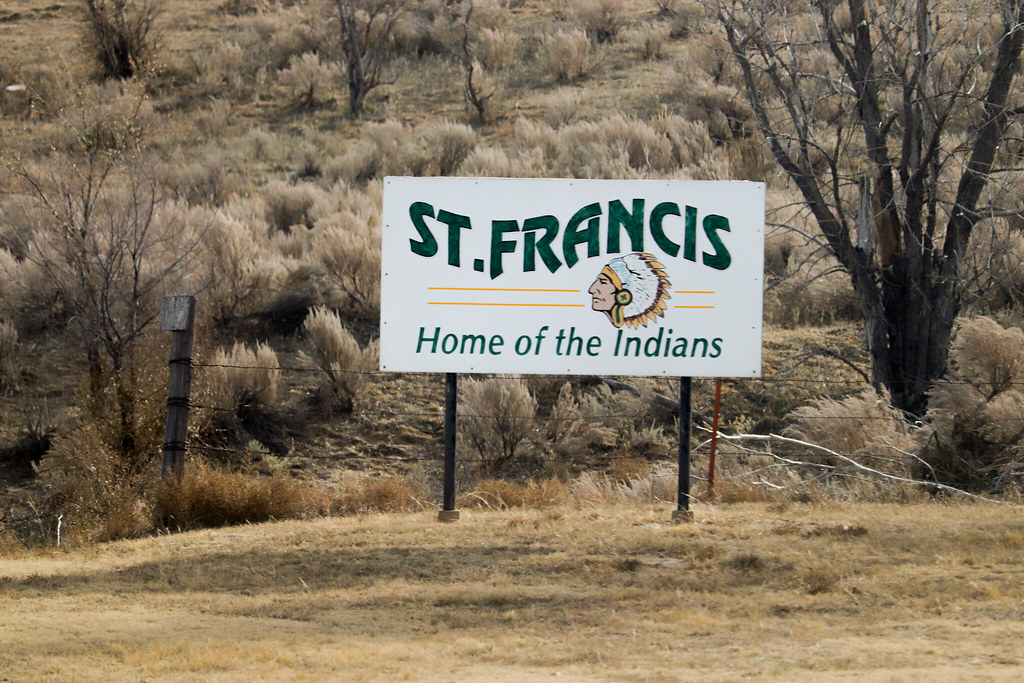 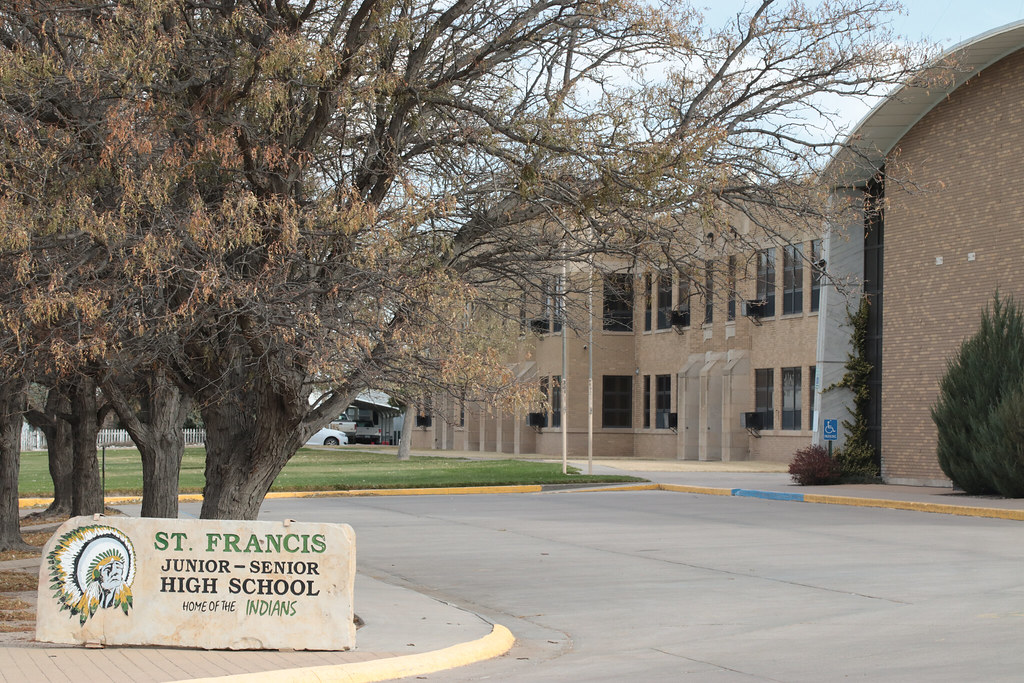 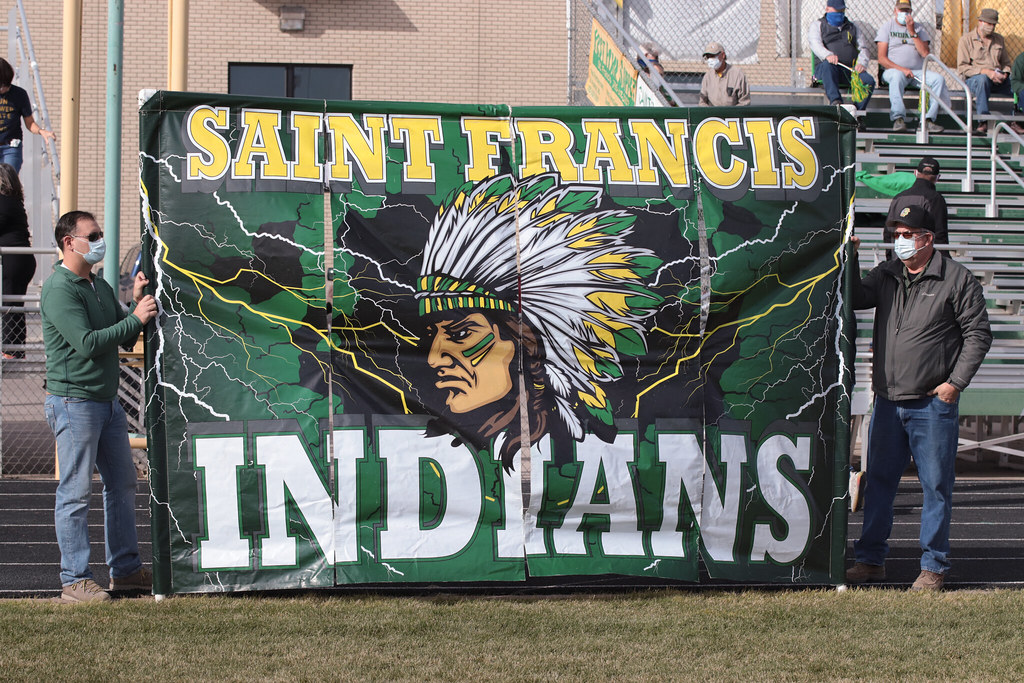 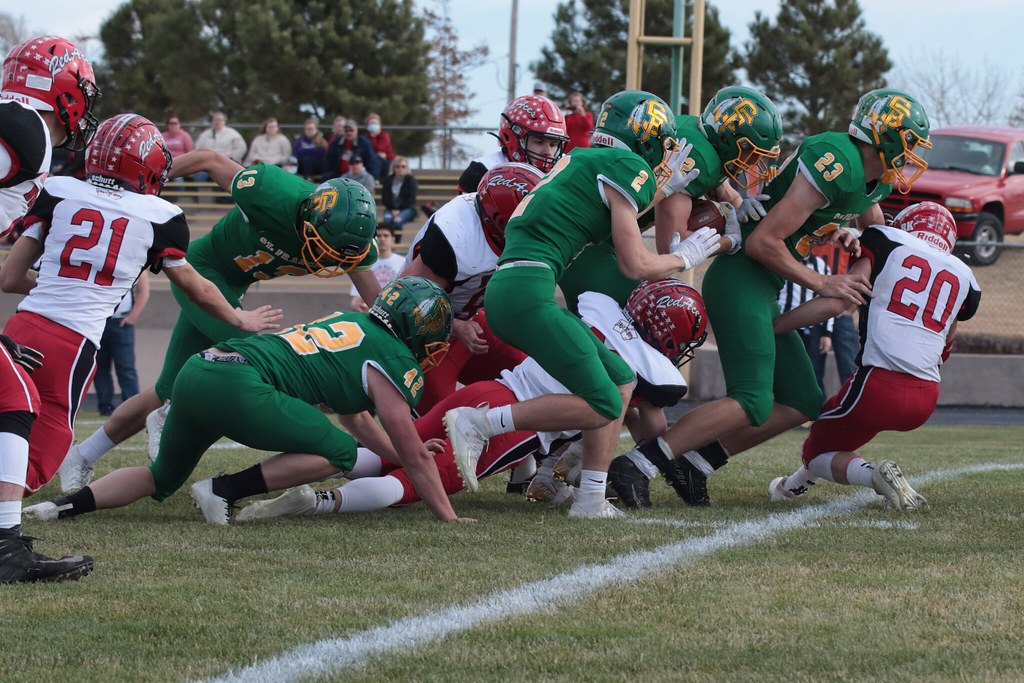 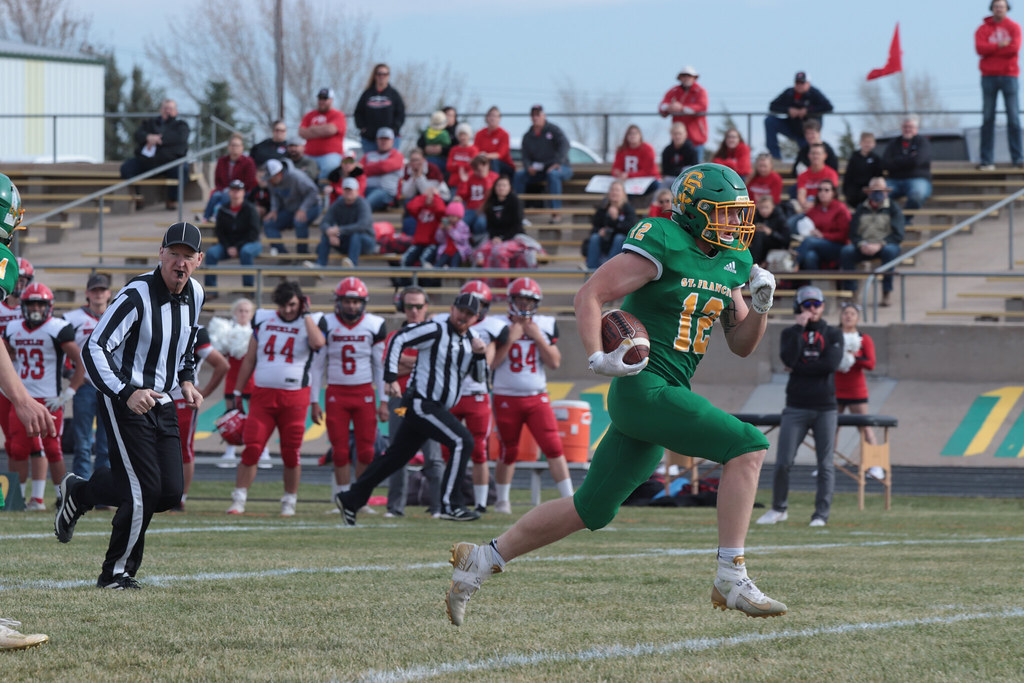 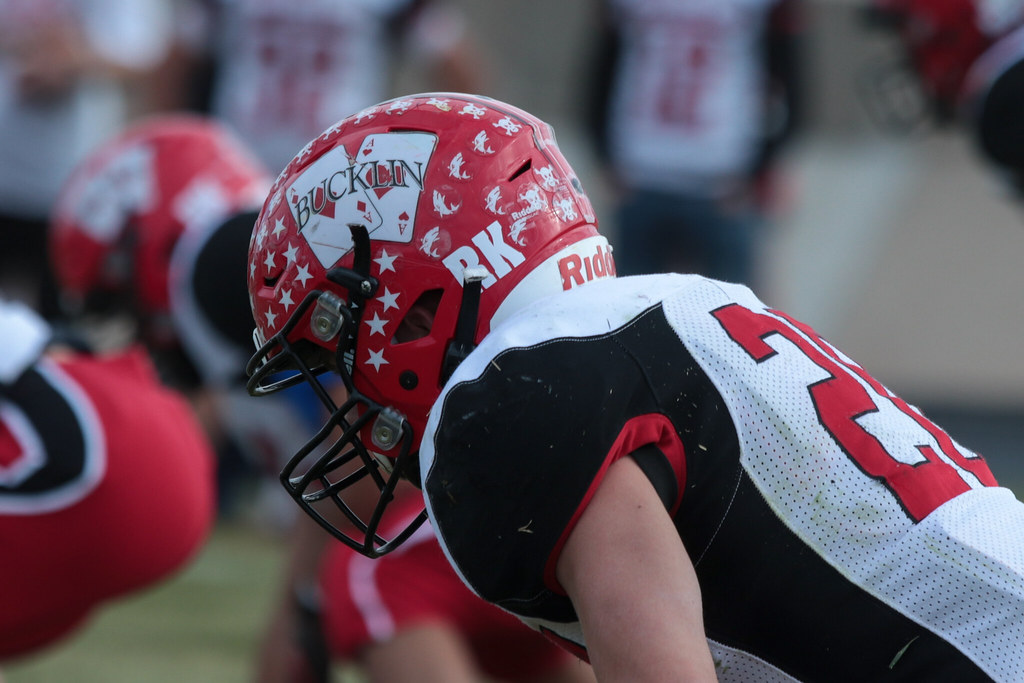 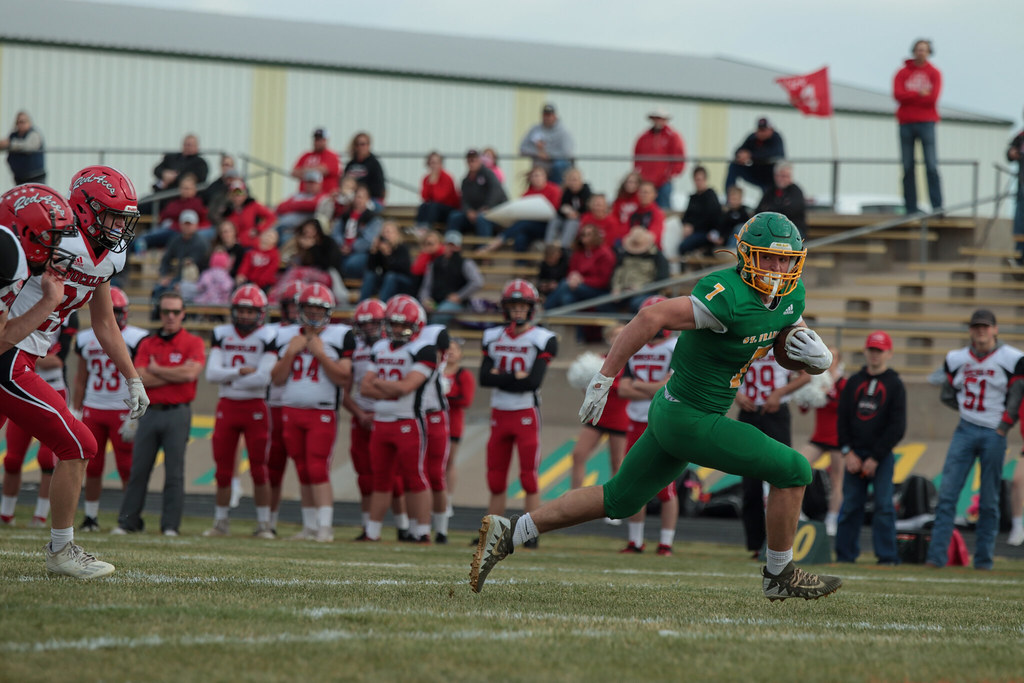 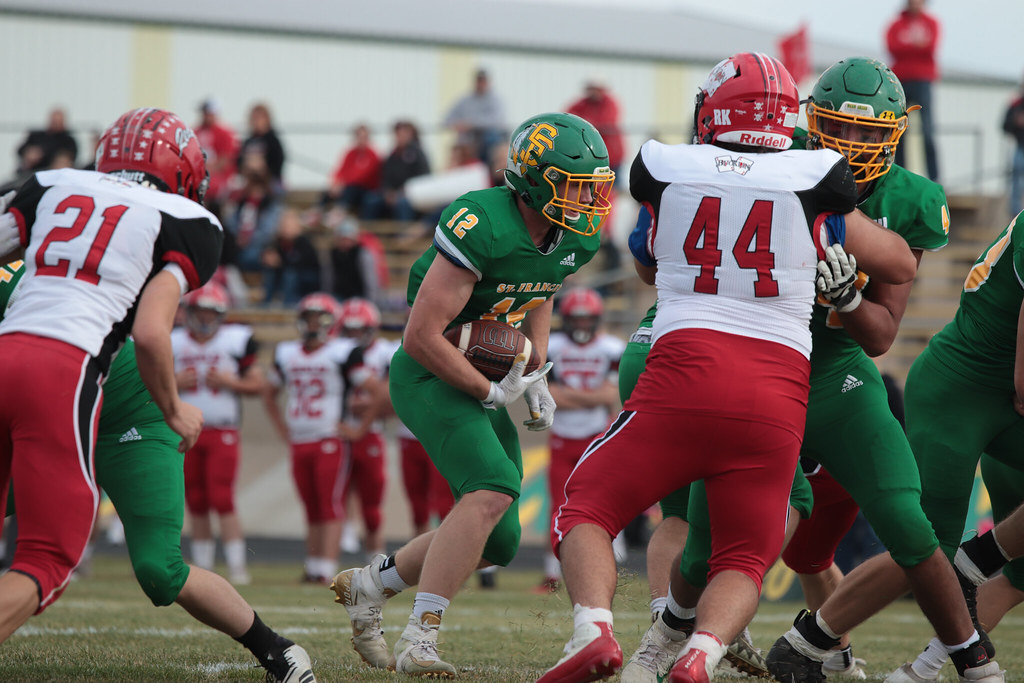 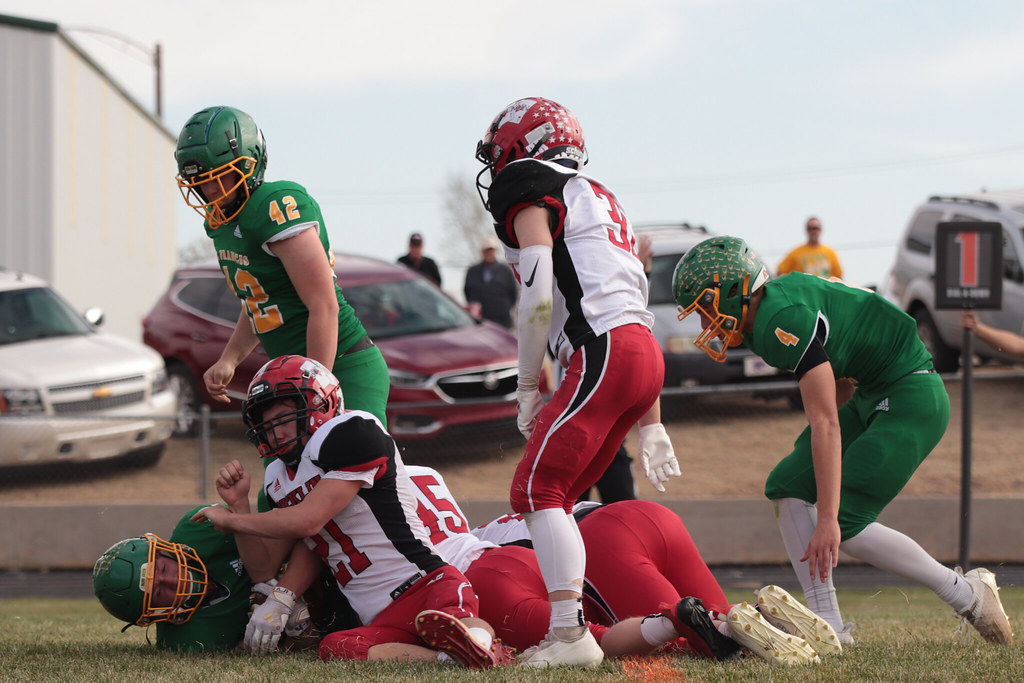 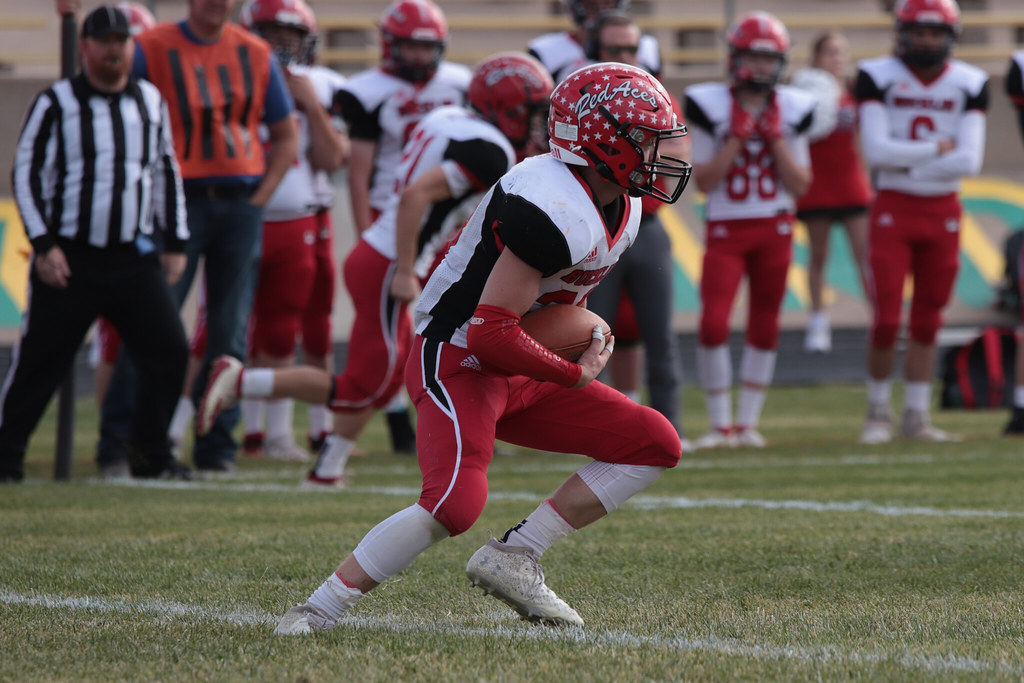 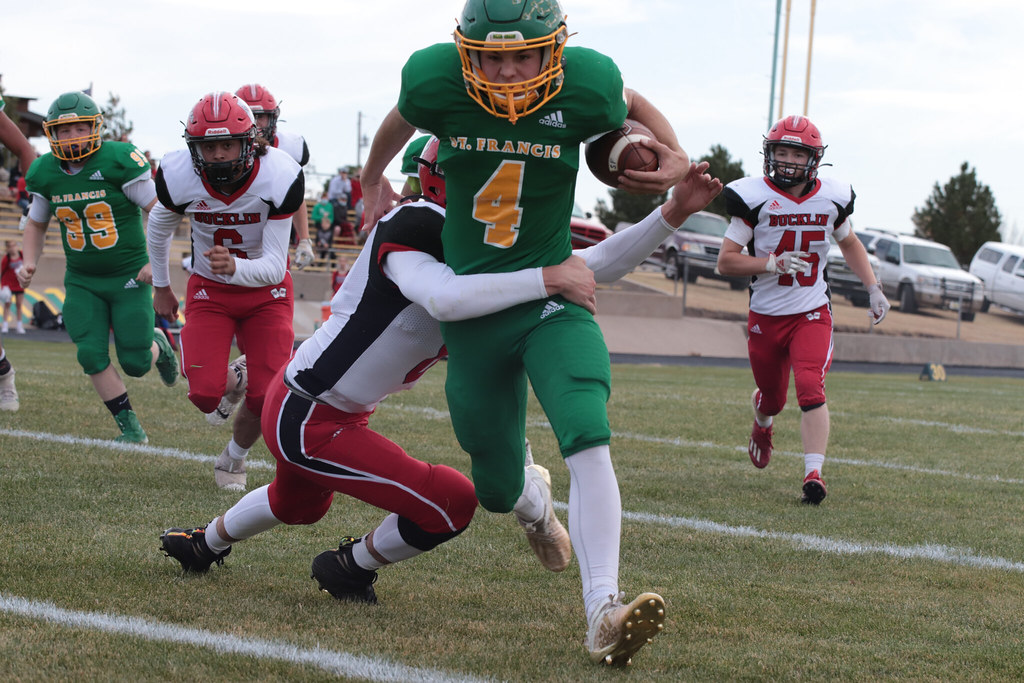 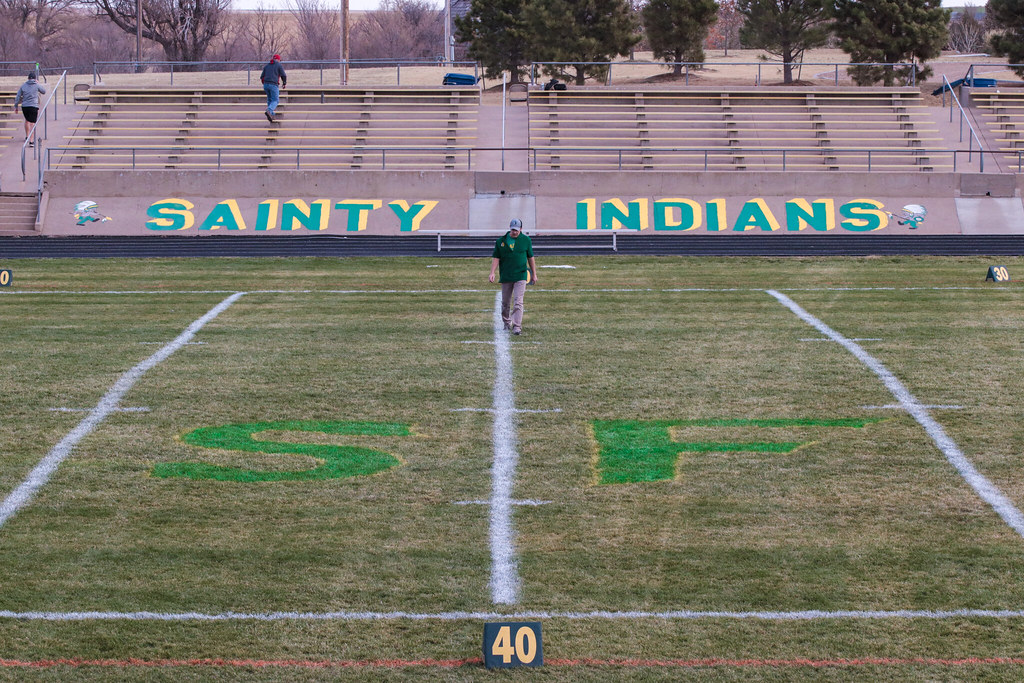 So, for travel, not much of note. Being business related, i don’t count most of it for football related. For food, the only thing noteworthy was a hoagie at Casey’s. Casey’s are the midwest equivalent to a Sheetz or Wawa. Their hoagies aren’t that bad. Though, they do have a lot of other options. And their sweet tea (where they sell it), is good. Everything else for food was KFC, Popeyes, Pizza Hut, and Subway. Not exactly anything noteworthy.

My Iowa plans fell through when Iowa changed their semifinal protocol. Instead of 12 games on 3 or 4 tickets, it became 12 games on 12 tickets. And none were available until midnight the day of the game. So, I went looking elsewhere. South Dakota had seven games over three days. I’ve been to the DakotaDome before, though this time would be after the renovations. But, tickets wouldn’t be onsale until noon on Monday. And to make it, we’d have to leave Tuesday around noon.

The line was busy to purchase tickets. And we didn’t get a call back until 1pm on Tuesday. My friend had already changed plans. I did, too. Though I was just going to double-up as a photographer for games already accounted for in Eastern Pennsylvania. But, with the phone call, I decided, what the hell, I’ll go out to South Dakota myself. Just myself.

So, seven games over three days. $75 for tickets. Hotel. Gas. Food. Etc. The whole weekend should be just shy of $500. If all goes well. We shall see.

Of the fourteen teams, I’ve seen only three of them. Harrisburg, Bridgewater-Emery/Ethan and Pierre T.F. Riggs. And an interesting note, Winner/BEE is a rematch of last year’s title game. And Riggs is back for the fourth straight year, playing a rematch with Brookings.