This was not the week I had planned. Though with Covid, there wasn’t a lot of certainty with those plans. The Ohio State Championships were scheduled to be held at Fortress Obetz just south of Columbus. At least that was the idea.

However, Ohio, like Pennsylvania, was going through some things heading toward their title games. Namely, Franklin County had increased restrictions. This severely restricted media covering the games. And then, the next day, bumped the games from Franklin County and moved them to Massillon.

Meanwhile, while waiting on word from Ohio, I did consider some Pennsylvania options.

There was only Friday night and Saturday afternoon games in western PA. The Friday game I would’ve liked to do, was already covered. So, with Ohio plans crumbling, I decided on a few games out east.

First up, was District 11 had several District Championship games at Whitehall. Just outside Allentown. One of those games was on Thursday night. There was also games on Friday and Saturday night. Locally, there were afternoon games at Wyomissing as well as afternoon games in Altoona, Hollidaysburg, and Steelton.

There was one other scheduled Saturday night game. Though, as the week went along, that game was cancelled.

So, for Thursday, it was an early drive east. For a 7pm kickoff, I headed out at 11am for the 5+ hour trip. With a gas stop, and lunch, I arrived to Whitehall High School a bit after 5pm. Then ran down the street to Wawa for something to drink, some Mango, and a hoagie.

Not everyday do you get a US Note in change. Thanks, @Wawa! #roadtrippin pic.twitter.com/irPZ7cRSYp

As someone who collects currency, this isn’t my first $5 US Note. However, first time I’ve ever gotten a US Note in change. Usually, the Silver Certificates slip through because the blue seal and numbers aren’t as noticeable. Secondly, there are no $1 US Notes, while $1 notes, of all types, have the same general design and only the seal colors change.

Anyways, on to the games…

On the way into town, I drove the ‘free’ route from Hazleton through Tamauqua. Which ended up passing me right by Northwestern Lehigh High School.

Tonight I'm in Whitehall, Pennsylvania for a District 11 Class 4A Championship between the Allentown Central Catholic Vikings and the Northwestern Lehigh Tigers at Zephyr Stadium. Kickoff shortly. #53 @PaFootballNews pic.twitter.com/yWI1ei9oa7

Zephyr Stadium is a beautiful stadium. With recent upgrades to the turf, lighting, stadium, etc. A really well constructed. The entire complex that the school buildings set on, is just a couple miles north of US22 and Allentown. The entire route crowded with business after business.

However, Whitehall is squarely in the edges of suburbia. Surrounding areas as close to rural as you can find that close to a bigger city in Pennsylvania.

District 11 did not participate in the state playoffs this year. This meant they could have a larger playoff field. Such as having District finals the same weekend the rest of the state was on the state semifinal round.

For 4A, it was a Thursday night contest on a cool night. It was my first time seeing Northwestern Lehigh. I had seen Allentown Central Catholic in a state championship game a few years ago. This was my first game at Whitehall. Other than a game at Plymouth Whitemarsh, it was my only Pennsylvania games east of Hershey.

Northwestern, as they’re generally called, just could not get much going offensively. A game projected to be close turned disappointing. Allentown Central Catholic scored twice in the first, and twice in the second. And in the third started the running clock on their fifth touchdown of the day.

A bit of controversy at the end, however, as Northern Lehigh was finally driving downfield. A pass into the endzone was trapped on the ground, but ruled a catch by the official in the back corner of the endzone.

It had no bearing on the outcome, other than ACC’s goal of ending the title game with a shutout. But it did put a damper on things in the final few minutes. Allentown Central Catholic 35, Northwestern Lehigh 6.

After the game, I had a hotel booked over by the airport. Just a few miles away in Allentown. It was, for the area, quite cheap. I’m guessing the lack of air travel made the airport hotels noticeably desparate. All of the cheap hotels were clustered around the airport. So, for one night, just shy of $60 for one of the nicer hotels.

With a late checkout, I had a very short drive to my night game. So, I had some time to kill. But, I just didn’t feel like exploring much. I spent about an hour getting a steak at Longhorn, the only steakhouse I found that was open without being ridiculously priced. I watched part of the OHSAA championship game on my tablet.

Then, it was a meandering drive to my night game.

Tonight I'm not far from Allentown, Pennsylvania for a game between the Parkland Trojans and the Liberty Hurricanes at Orefield Football Stadium in Orefield, PA. #54 @PaFootballNews pic.twitter.com/Laa9DSzchn

Parkland had won the 4A state title back in 2002. As a 4A school. And were just a few miles west of Whitehall. However, there was a drastic difference in surroundings. Parkland is entirely rural around the stadium and elementary school in Orefield. Though the High School (which is built to look like the Millenium Falcon) has an Allentown mailing address.

The game was played outside the playoff format of District 11. Parkland was hosting Liberty. In a matchup projected to be entirely one-sided. And, then, it wasn’t.

Parkland scored first, but Liberty answered it. In the second quarter, all Parkland could muster was a single touchdown. But, Liberty would score in the first play of the third quarter. A 68 yard pass over the middle to a completely uncovered receiver who raced the rest of the way in for a tying touchdown.

However, the high would be short-lived, as Parkland would rattle off two more touchdowns of their own. And then, in the fourth, two more. And a field goal to add the cherry on top to end their season.

My original plans were to see an afternoon game and then a night game. The only options were basically in Whitehall and one in West Perry. Northwest of Hershey.

So, instead, the Saturday options were between Altoona hosting the Erie McDowell-Central York game, and Hollidaysburg with the Pine-Richland and Governor Mifflin game.

With a camera crew at Altoona, it was an easy decision to cover the Hollidaysburg game. Either way, one of the two games would have a new team for me to see.

Just a short three hour drive from Allentown to Hollidaysburg via State College. Again, shunpiking the PA Turnpike and its $9.30 EZ Pass toll.

I stopped at a Wawa post-game, and then drove toward State College. Along the way, before the newly built stretch of US322, I called it a night at one of the stops along the way.

In the morning, it was on to Altoona. A stop at Sheetz. And an impromptu drive by Bishop Guilfoyle High School to see where it was located at.

Then, it was on to Tiger Stadium in a drizzly rain to start the game.

This afternoon I'm at Tiger Stadium in Hollidaysburg, Pennsylvania for a PA Class 5A Semifinal between the Pine-Richland Rams and Governor Mifflin Mustangs. Kickoff at 1pm. #55 @PaFootballNews pic.twitter.com/tADwldVMLu

The stadium sits behind the elementary school. It’s quite stylish. With a nice checkerboarded arch to walk through. The only real complaint is that the light poles sit in front of the stands on both sides of the field.

This was my first time seeing Governor Mifflin play. They’re from the east side of the state, just outside Reading. Despite them being the home side of the stadium, they were wearing their white jerseys and the visitor on the scoreboard.

With the rain, Pine-Richland’s passing attack faultered early. Two interceptions, a fumble, and Governor Mifflin raced out to a surprising, 21-0 lead.

Pine-Richland would storm back, however, and cut the lead to 21-19 after failing on a two-point conversion. The Mustangs of Governor Mifflin would tack on one more before the break.

Pine-Richland would see their early comeback fall apart, as Governor Mifflin would go up, again, by three scores. This time, 41-19. But, Pine Richland would answer with two more scores of their own in the third.

17 seconds into the fourth quarter, Pine-Richland would score on a 12 yard run to tie it at 41-41. And then Governor Mifflin would go on an 8 minute drive, draining the clock, to tack on a 34 yard field goal.

Governor Mifflin with a 34 yard FG. Leads Pine-Richland, 44-41 with 3:06 left in the game. @PaFootballNews pic.twitter.com/Beeg4Pdyrx

And then, just as before, Pine-Richland struck quickly. This time on the ground. A run to the left side seemed destined for the sideline. But as 4 rounded the corner, there was no one that had the angle on him. And racing it 54 yards for the touchdown and the lead.

Pine-Richland takes the lead on a 54 yard TD run. Leads Governor Mifflin, 48-44 with 2:18 left in the game. @PaFootballNews pic.twitter.com/c4rVdzMgVx

That photo, as well, holds significance as it’s on the Pittsburgh Post-Gazette website to accompany the article. They did not, however, use the photo in the paper. The article was photo-less. Though, the Reading Eagle did use it, but I don’t know if it’s online-only or was in the print edition.

After that touchdown made it 48-44, Governor Mifflin’s stodgy ground game struggled as they flipped to passing attempts. A 7 yarder. An incomplete. A near pick-six. Pine-Richland would hold on for the four point victory after being down 22 points at one point in the third quarter.

After the game, it was dinner with the PA Football News crew in Hollidaysburg. And then the 3.5 hour drive home. A mostly unevently trip. 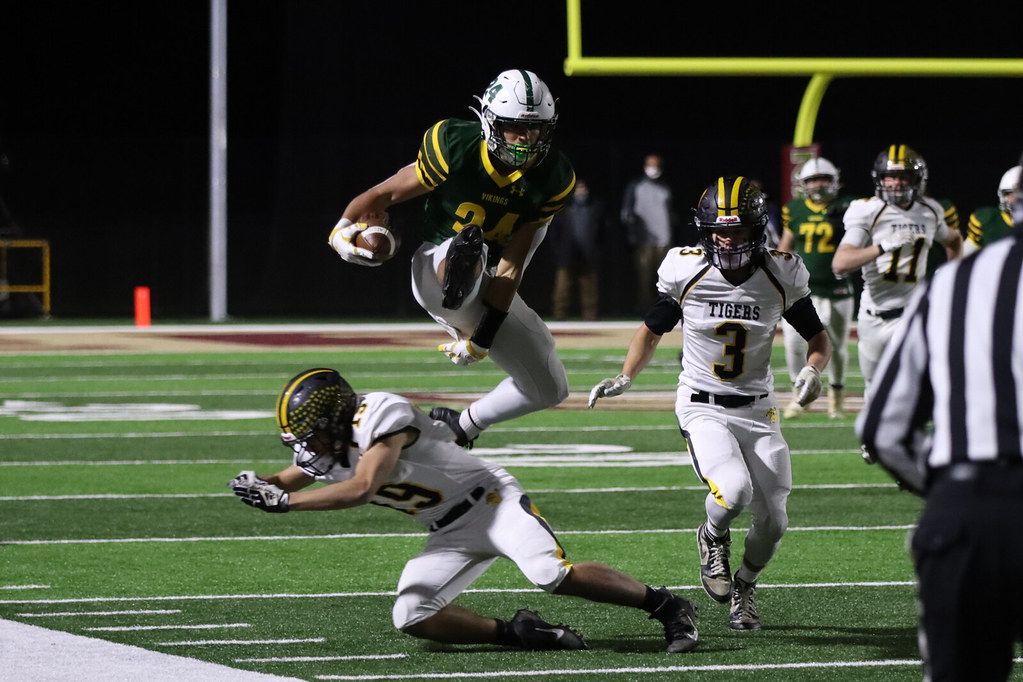 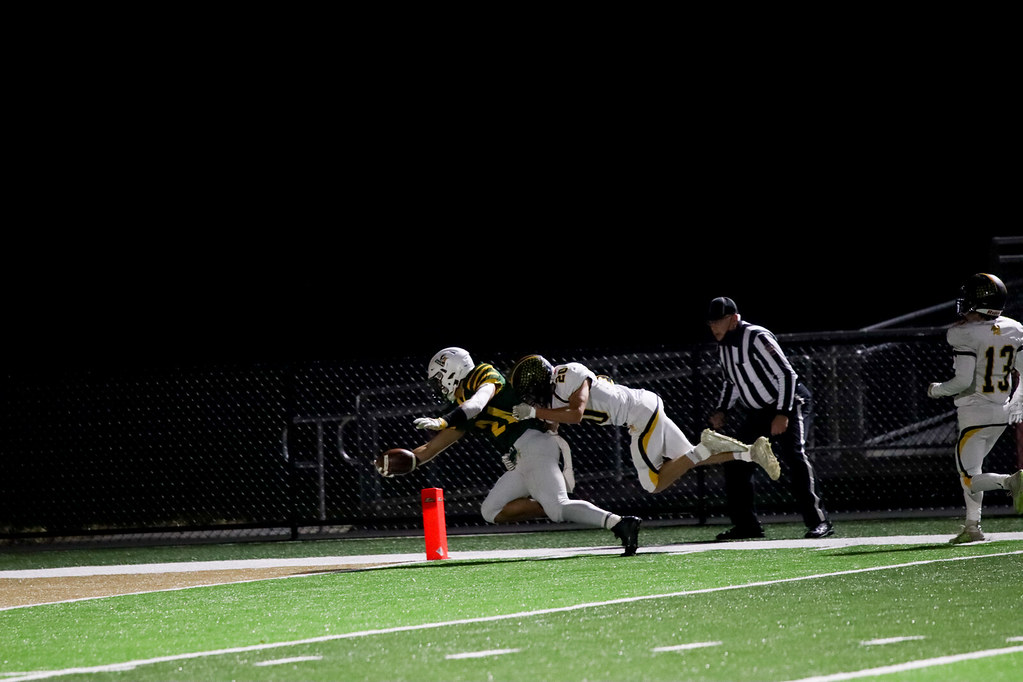 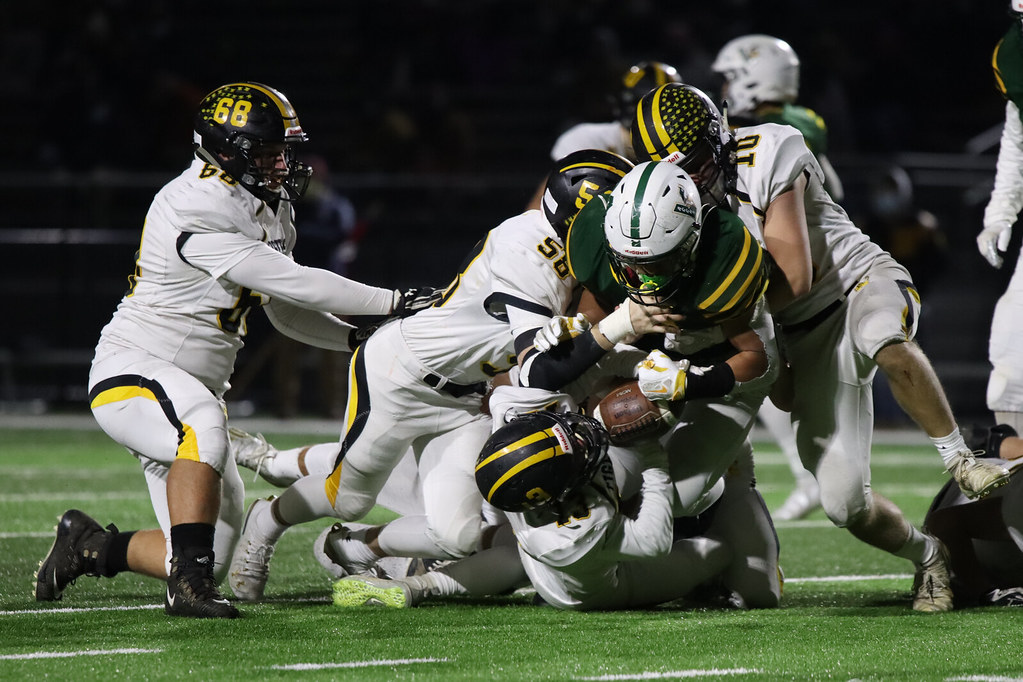 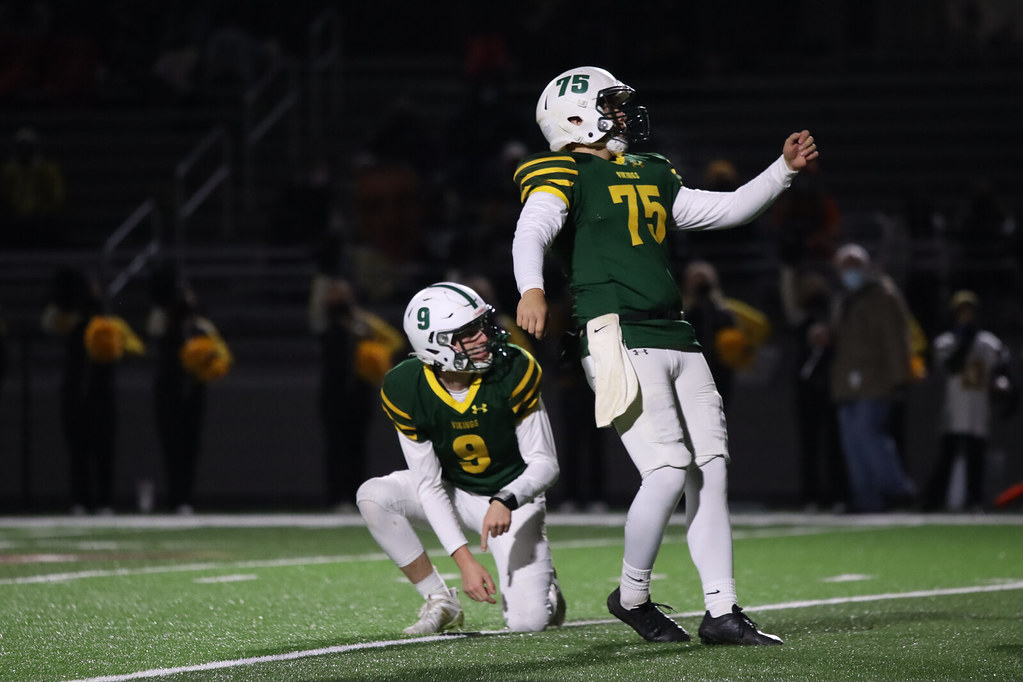 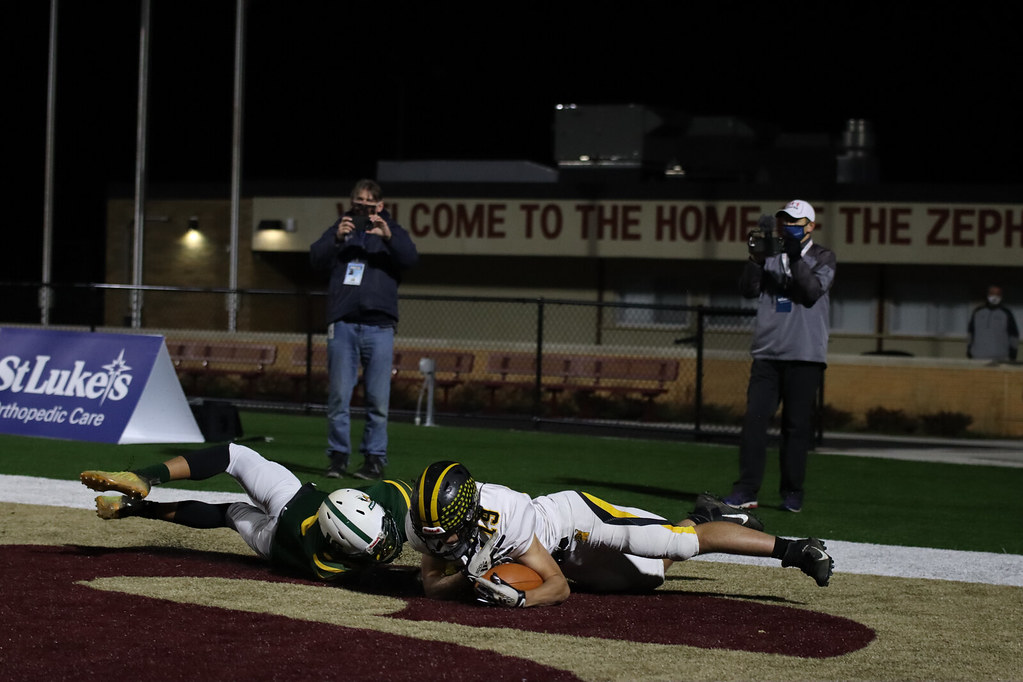 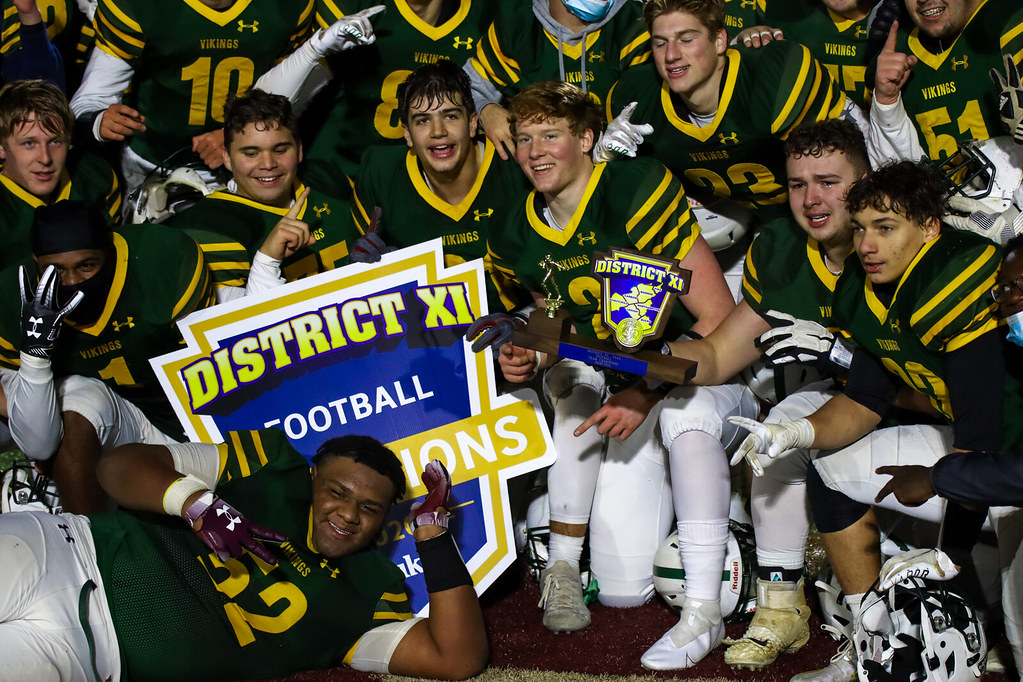 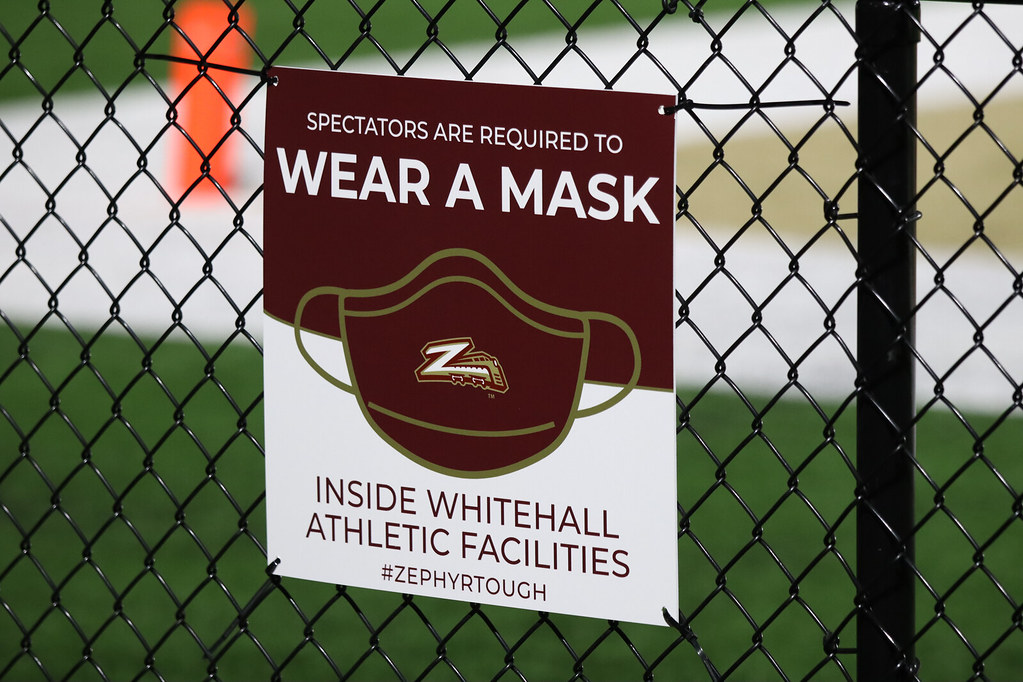 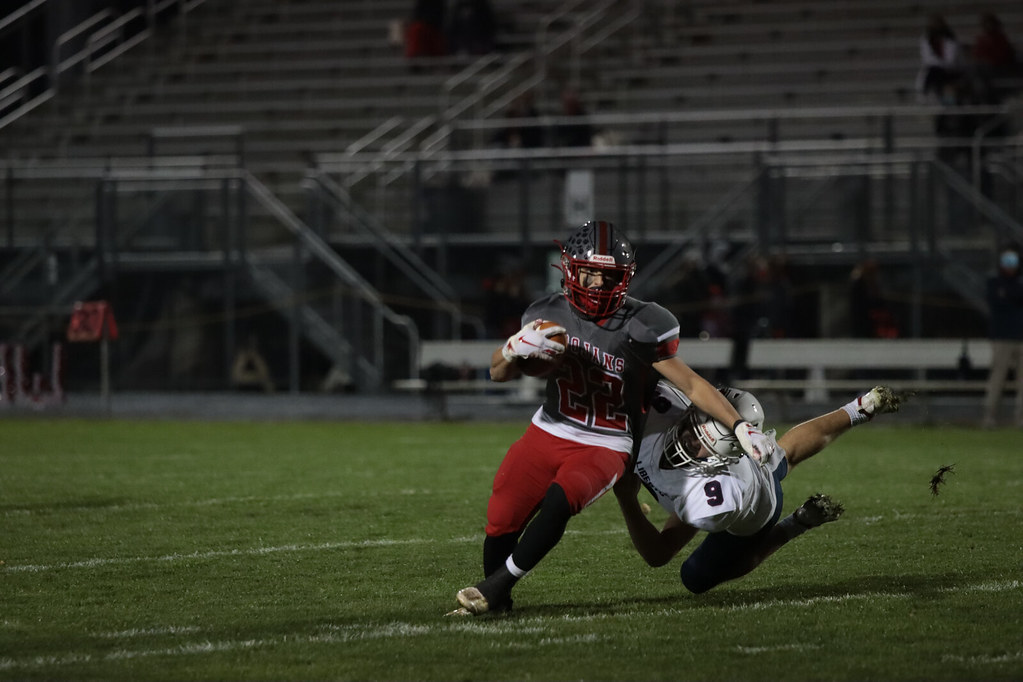 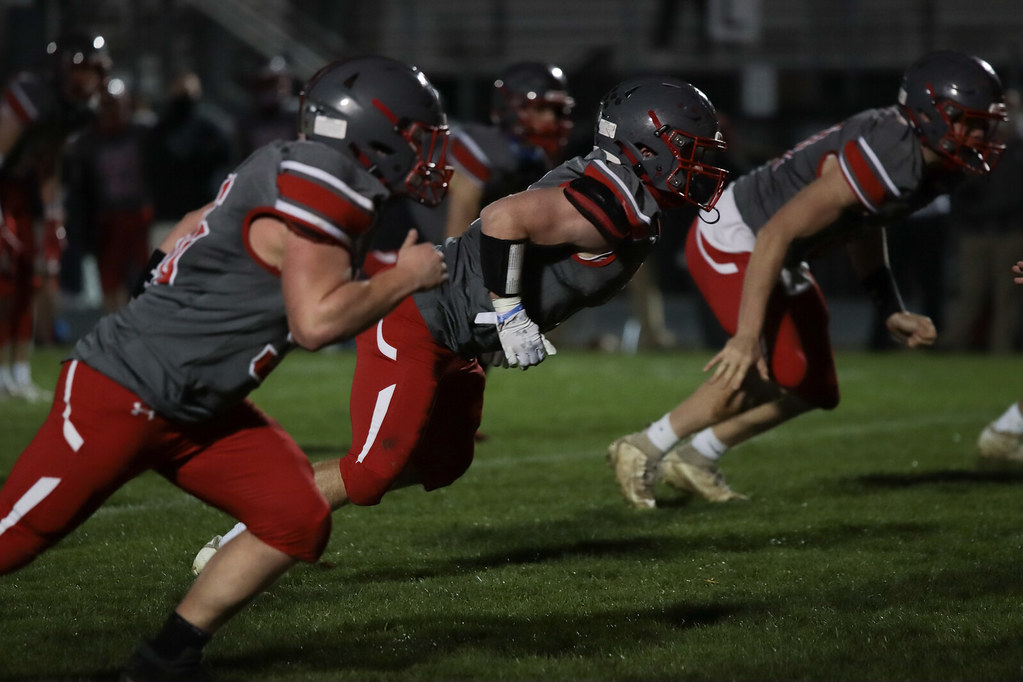 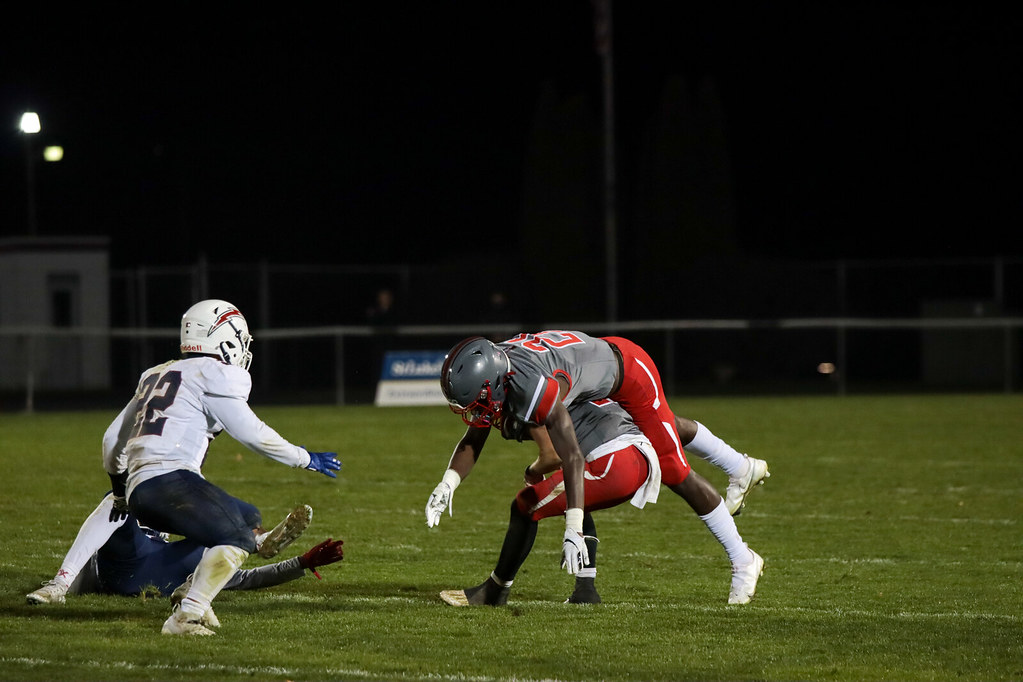 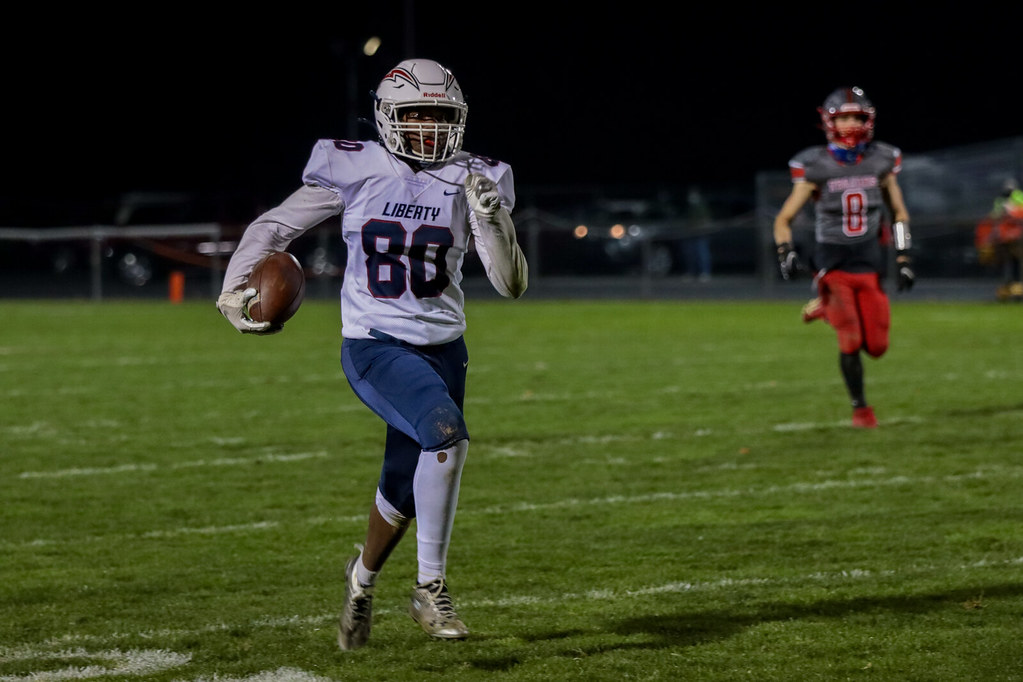 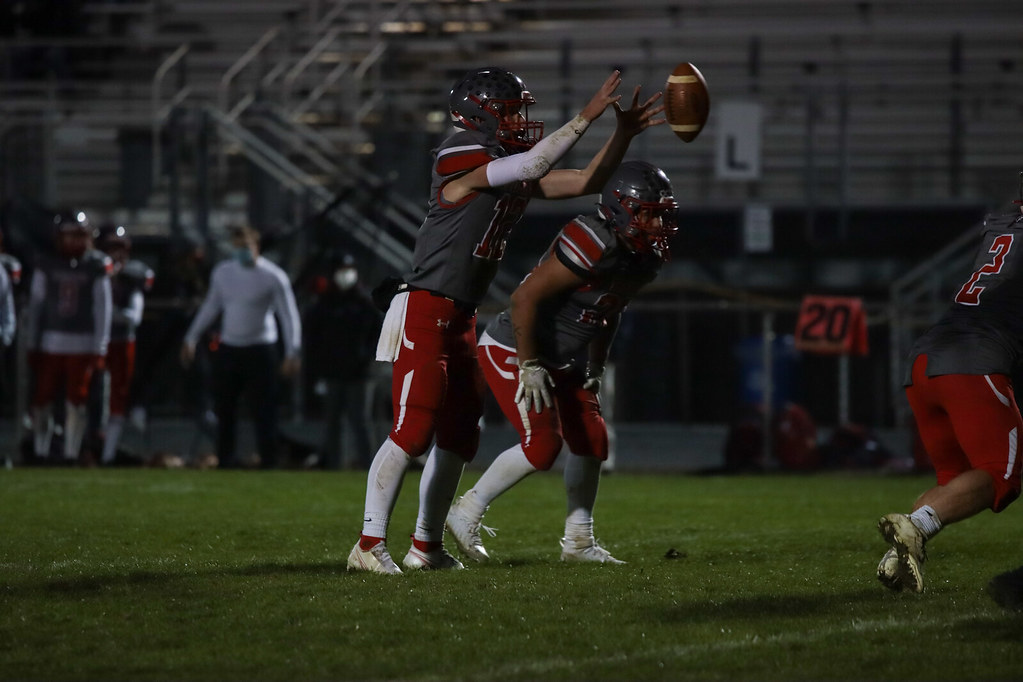 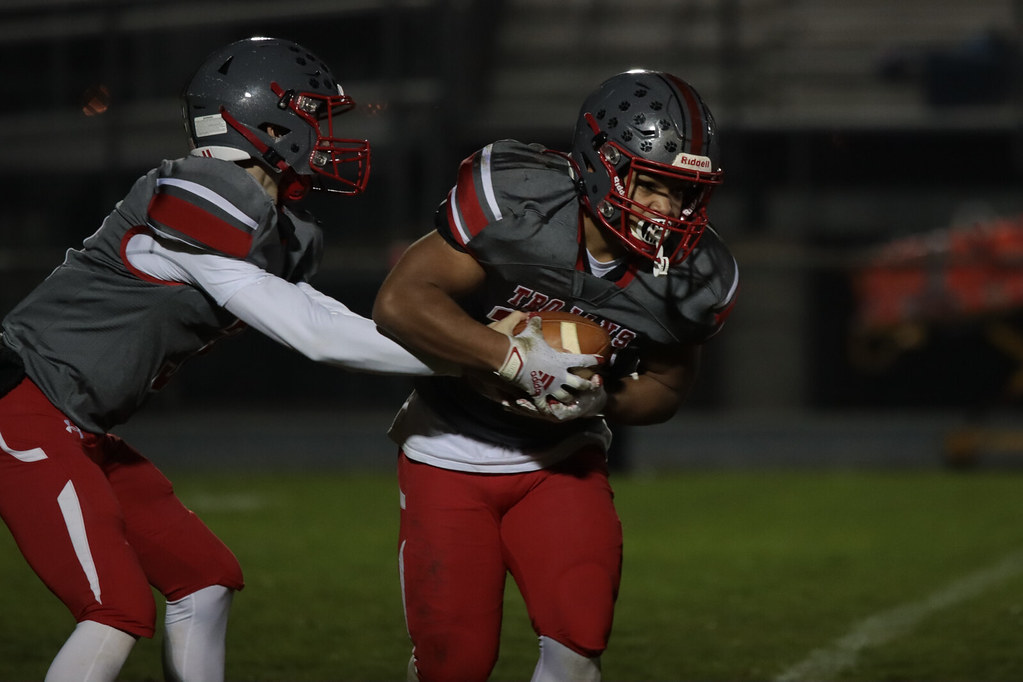 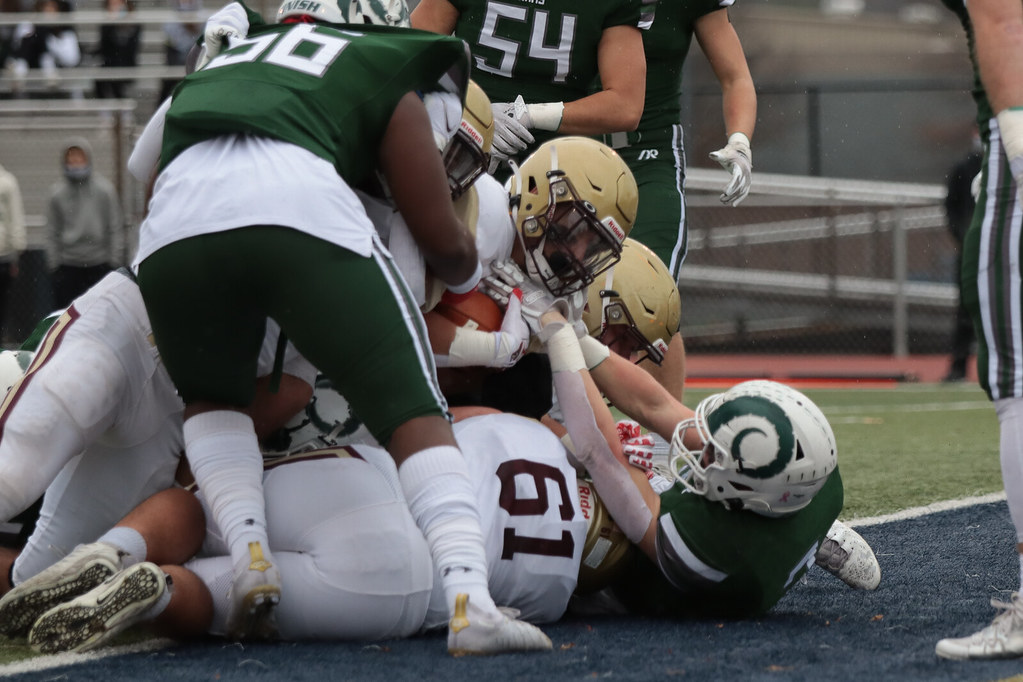 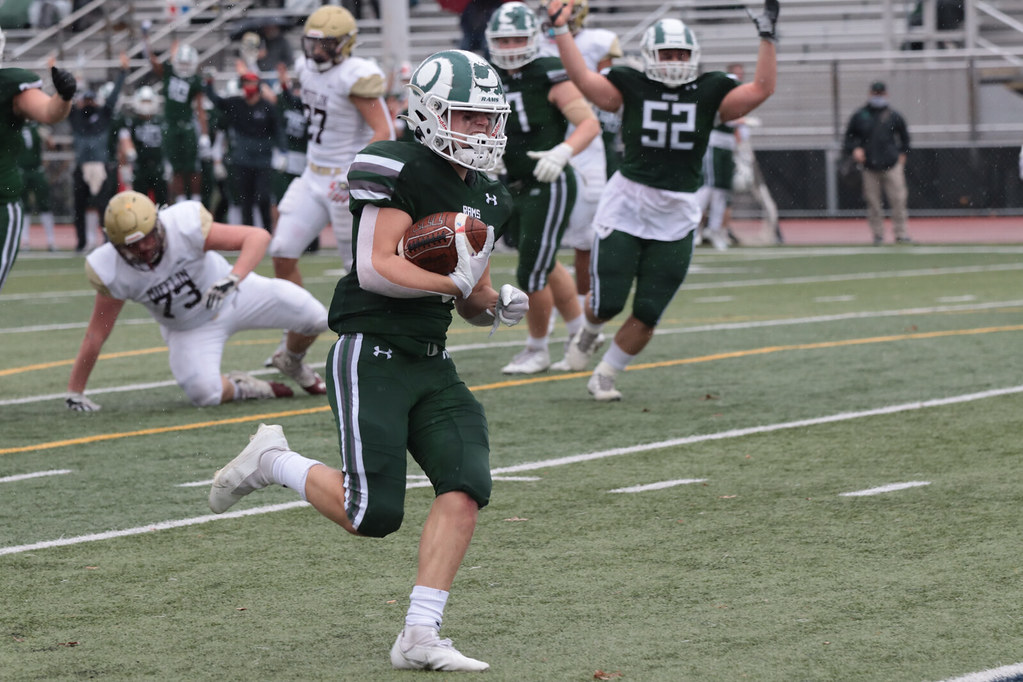 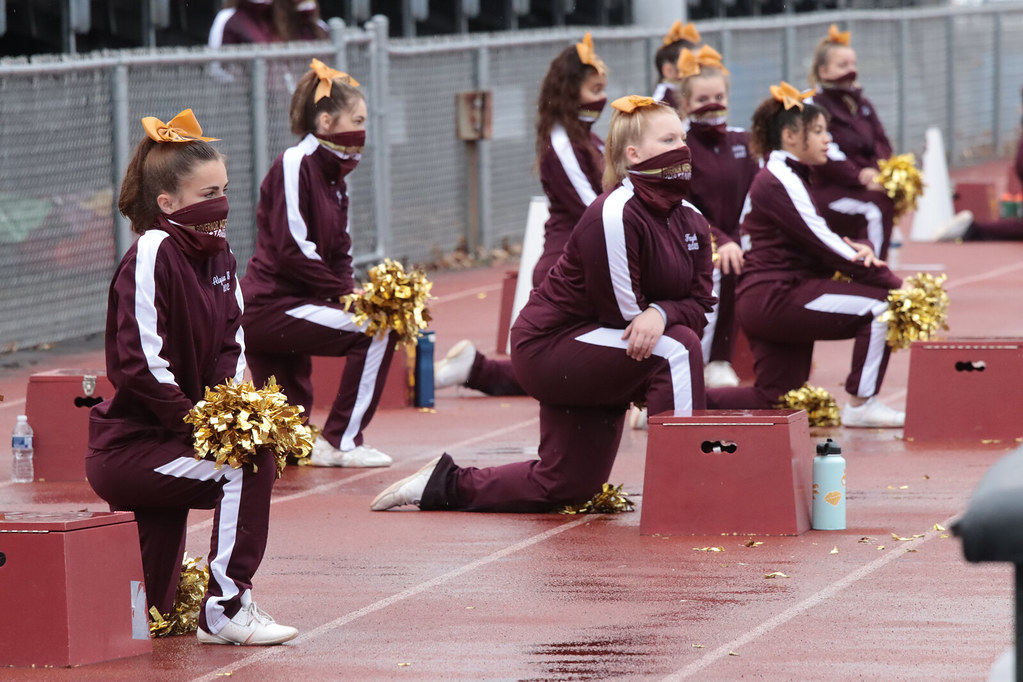 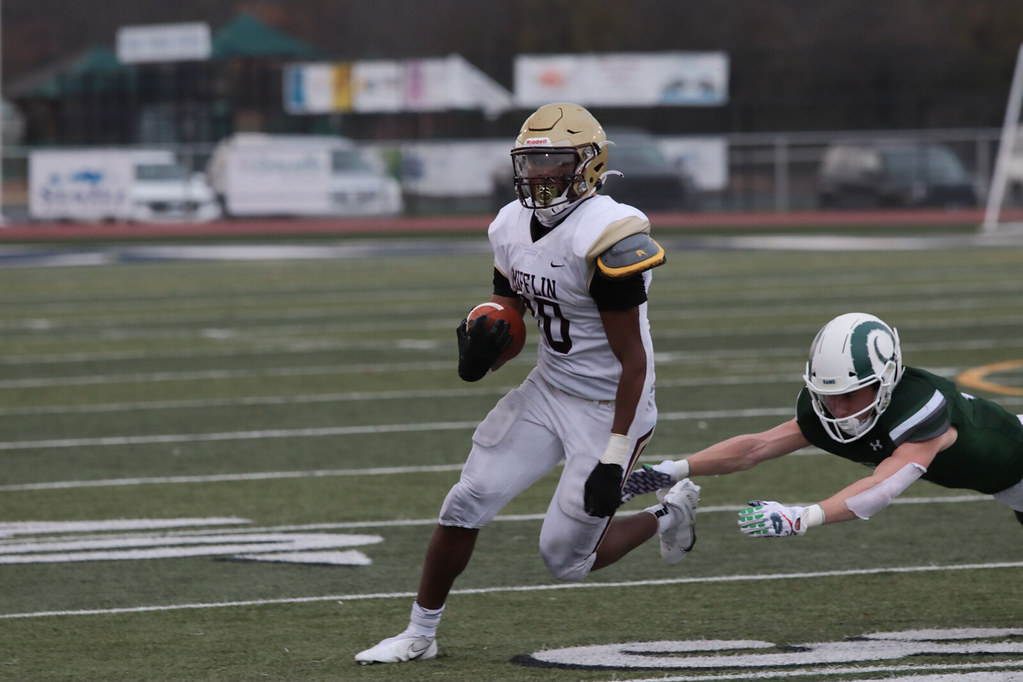 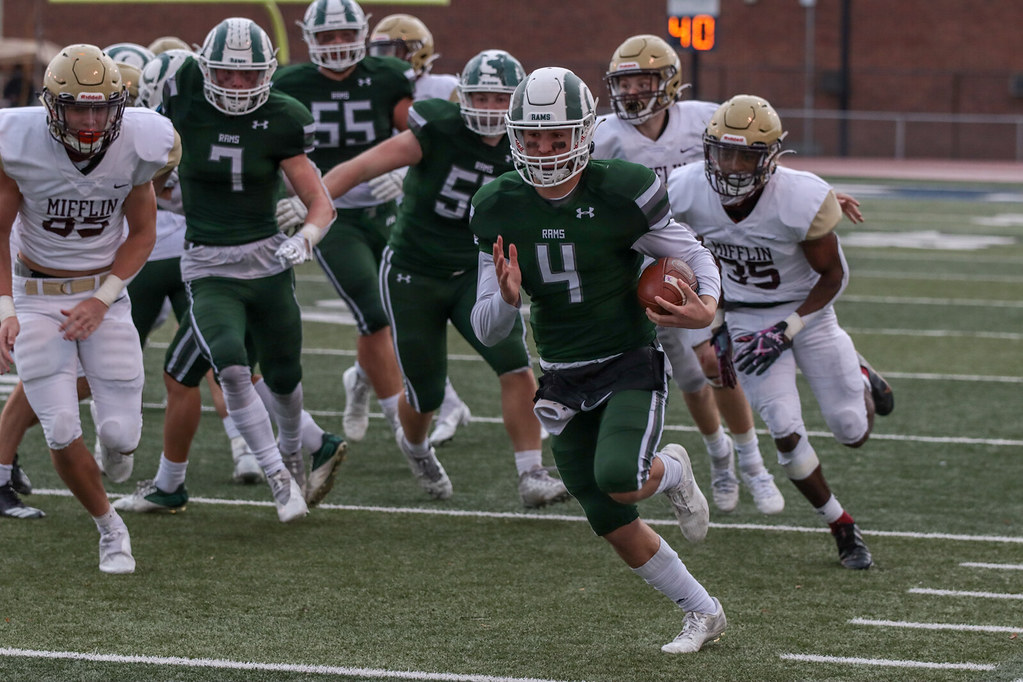 My plans are to be on the sidelines in Hershey for the 2020 PIAA Football State Championships. With the COVID restrictions, it’s very limited, even for media, to cover the finals.

The games, due to being a few weeks earlier, will be condensed over two days. Starting at 11am, 3:30pm, and 8pm. On both Friday and Saturday.

Central Valley, a consolidation of Monaca and Center, made their first joint appearance last year, losing 21-14 to Wyoming.

Wyomissing (not Wyoming), otherwise, has been in one state title game. A 17-14 victory over Aliquippa in 2012.

Pine-Richlandare 1-1, and lost one of the most memorable state final games. A 39-38 loss to Manheim Central in 2003 in a blizzard. The night game on Friday, saw the Saturday games postponed to Sunday due to the storm. They also won 41-21 in 6A in 2017 over St. Joseph’s Prep.

Cathedral Prep has a long record in the state finals.

Thomas Jefferson, from Jefferson Hills just south of Pittsburgh, are in their fifth state title game. Their 4-0 record came with wins in 2004 (Manheim Central), 2007 (Garnet Valley), 2008 (Archbishop Wood) and 2019 (Dallas). They’re playing for their second set of back-to-back state titles.

Jersey Shore are in their first state title.

St. Joseph’s Prep has been in 7 state titles now. Winning 5 times. Victories were in 2013-2014 (Pittsburgh Central Catholic and Pine-Richland), 2016 (PCC), 2018-2019 (Harrisburg and Central Dauphin). Their lone loss came in 2017, a loss to Pine-Richland. This is their fifth straight state title game appearance.

Central York are in their first ever state final.

This will give me three new teams (Steelton-Highspire, Jersey Shore and Central York). These six games will put Hershey as the third most games in one city I’ve attended. Only being behind Arlington, Texas (87) and Greenville, PA (56).