I wasn’t quite sure what to call this week. Was it Week 28? 2021 Week 1? Or Week 0? Well, I finally settled on 2020 Week S0. Short for Spring Week 0. Why 0? Because Virginia’s first week is a bit odd, and with games going from Monday through Sunday as part of the opening ‘starter’ week, I decided on S0.

Which then brings up the games. One, is that with the spring schedule it’s been much harder to track down which games are being played where and when. This isn’t like New York whose districts put out season schedules all at once. Usually publicized through print media that’s easy to discern. Or, PA, where schedules were compiled for PA Football News from just a few districts.

In Virginia, there are districts, but they’re setup a little different than PA or NY. They’re more like leagues, but are disrespective of team size. Virginia has 6 classifications, but only 3 levels for the regular season. Split once the postseason arrives. And it’s regional. So, southwest Virginia has a glut of small schools in A and some AA teams. The districts do have their own websites with schedules. And it’s rather comprehensive. However, tracking down which school is in which district is problematic. So, good ol’ untrustworthy Maxpreps is the basis for finding games. And then it’s searching out the schools to see if maxpreps is right (it’s wrong a lot, again).

There were plans for one game on Friday and one game on Saturday. Preliminary plans for a Saturday night game had fallen through. Abingdon had moved their game up from 7pm to 2pm. While Abingdon was the first school to confirm their game, their bumping the game up to 2pm made it the default afternoon game. A few others had already outright cancelled due to weather. A plethora of grass fields and rain or snow forecast made games problematic.

And with so many games moving from Friday night to Saturday to avoid the worst of the weather, there were no southwestern Virginia games available. So, further up I-81 I went searching for a game that was actually being played on Friday night. And finally landed on Waynesboro. A small town just east of I-81 on I-64 near the divider between the Blue Ridge Parkway and Skyline Drive. It’s a beautiful area.

So, I was in Circleville, Ohio on Friday morning and drove over to meet my friend. From there, we carpooled the 400+ miles to Waynesboro’s game later that night. We headed down I-77 through Charleston, while shunpiking the first toll, and then down to Beckley. I-64 east over the mountainous southeastern part of the state and our first run-in with snow. It was there that I realized I hadn’t brought pants. The forecast called for warm, yet rainy. Now, it was trending toward cold rain. So, after running through some snow, we stopped in Lexington, Virginia at a Walmart.

This was my first time in Lexington. In my quest to visit every county (or equivalent) in the U.S., Virginia is a special circumstance. All cities in the state are independent of their counties. It leads to the unusual situation where county seats are located OUTSIDE of the county, in the independent city. And Lexington is one of those independent cities. So, I had 4 more counties and 5 more independent cities left in the state. Lexington, actually traveling through the jurisdiction, and then just east to the also independent Buena Vista knocked two off my list. My first clinches of 2021.

From there, we headed north along I-81 in rain and entered snow as we reached Waynesboro. It’s a nice town to drive through. The school is near the middle of town. The stadium located to the east and south of the school. The field was already covered with snow and was falling heavily at kickoff.

Waynesboro is the Litte Giants, like Fremont Ross in Ohio. They’re purple and yellow, a bit similar to LSU. Wilson Memorial are located just 6.9 miles west of Waynesboro and are the Green Jackets. They’re located in Fishersville.

In Virginia, crowds aren’t entirely back for games. Just a few guests per player were allowed in. The games were streamed on NFHS Network.

With the snow, the game wasn’t expected to be the best game in terms of ball control. It started evenly, but Wilson Memorial began to pull away in the second half. Waynesboro’s offense struggled in the conditions. Once the game got lopsided, Waynesboro’s ability to mount an adequate comeback fell apart. And Wilson Memorial won convincingly, 35-8.

After the game, it was to the hotel. Which, without knowing exactly where the Friday night game would be, was booked in Wytheville. A short 2.5 hour drive from Waynesboro. With snow to make it interesting.

The thought was that somewhere in southwest Virginia there’d still be a Friday night game. Yet, all of them were pushed back to Saturday afternoon.

Which brings us to Abingdon. When the schedule first came out, Abingdon had their home game listed at 7pm on Saturday. And with whole slew of games in the afternoon, meant for an easy doubleheader.

But, while checking on afternoon games (either Galax, where I’ve been, or Rural Retreat, where I haven’t), Abingdon’s game got moved up from 7pm to 2pm. Primarily due to the impending rain.

So, in the morning, we drove the short drive southwest from Wytheville to Abingdon. Stopping at the Shoney’s for a late breakfast before the game. 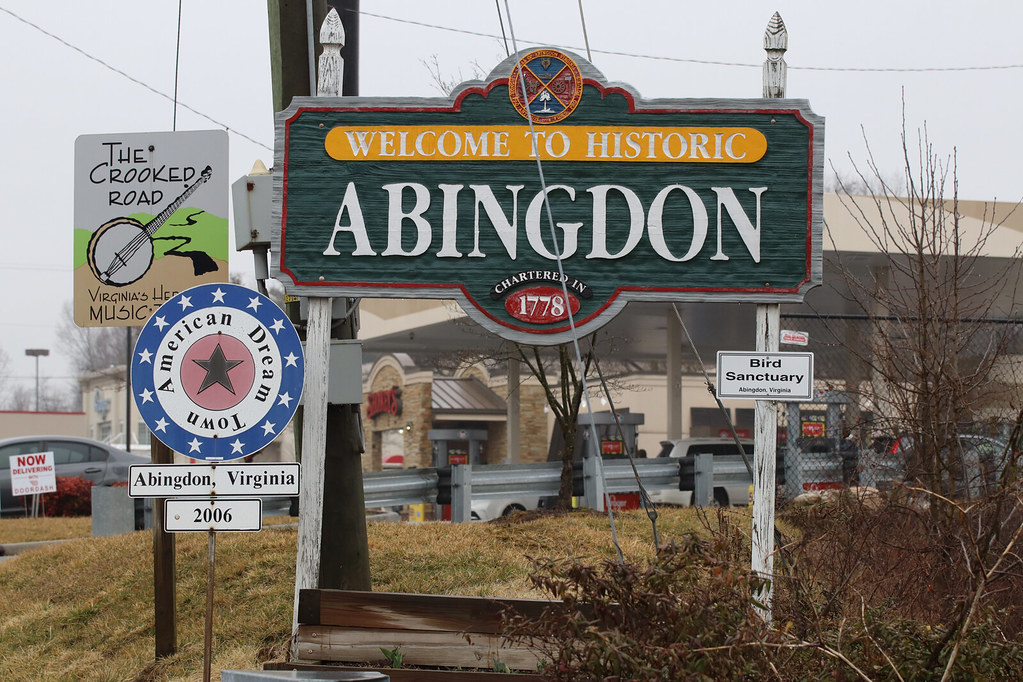 Then we went over to the high school at 1pm for the 2pm kick. And found it suspiciously devoid of activity. The gates were open. And there were a few cars. But, no signs of a game an hour away. So, off to twitter I went.

I saw one tweet about Virginia-Grundy being moved to the Stone Castle at 2. A game that I would have enjoyed doing if not agreeing to do the Abingdon game now set for 2. But then, I found it.

Abingdon’s game against Gate City was bumped to 7pm. Again. But at the Stone Castle. A doubleheader at one of my all-time favorite stadiums.

Though the weather was a bit unsavory, we hightailed it down I-81 to Bristol and over to Bristol Municipal Stadium. Also known as the Stone Castle.

I had been to the Stone Castle back in 2015. My wife and I made the drive down in Week 0 for a Thursday night game between the homestanding Tennessee High Vikings hosting Dobyns-Bennett. This time, however, it’s the crosstown rival Virginia High Bearcats hosting Grundy.

Virginia used to play their home games at the Stone Castle. But have since relocated to their own stadium on their side of town. For those who are unaware, Bristol sits right on the state line. And has Bristol, Virginia and Bristol, Tennessee.

Bristol. Not the greatest elements for a shot of the famous sign. #roadtrippin pic.twitter.com/pjNdpoCjJy

Without the okay to cover the Virginia game, it was just a shot-in-the-dark that we could show up and cover the 2pm game instead of just waiting until 7pm for the Abingdon game.

This afternoon I'm at an impromptu game at the famed Stone Castle in Bristol, Tennessee. Between the Virginia Bearcats and the Grundy Golden Wave. #91 @PaFootballNews #BeyondTheKeystone pic.twitter.com/CTNXCTPwj5

We got in with little issue. Which was nice. Arriving just a few minutes before kickoff. With little time and the bad weather, I only used my long lens. And didn’t go around the stadium getting photos. Which I had done previously. 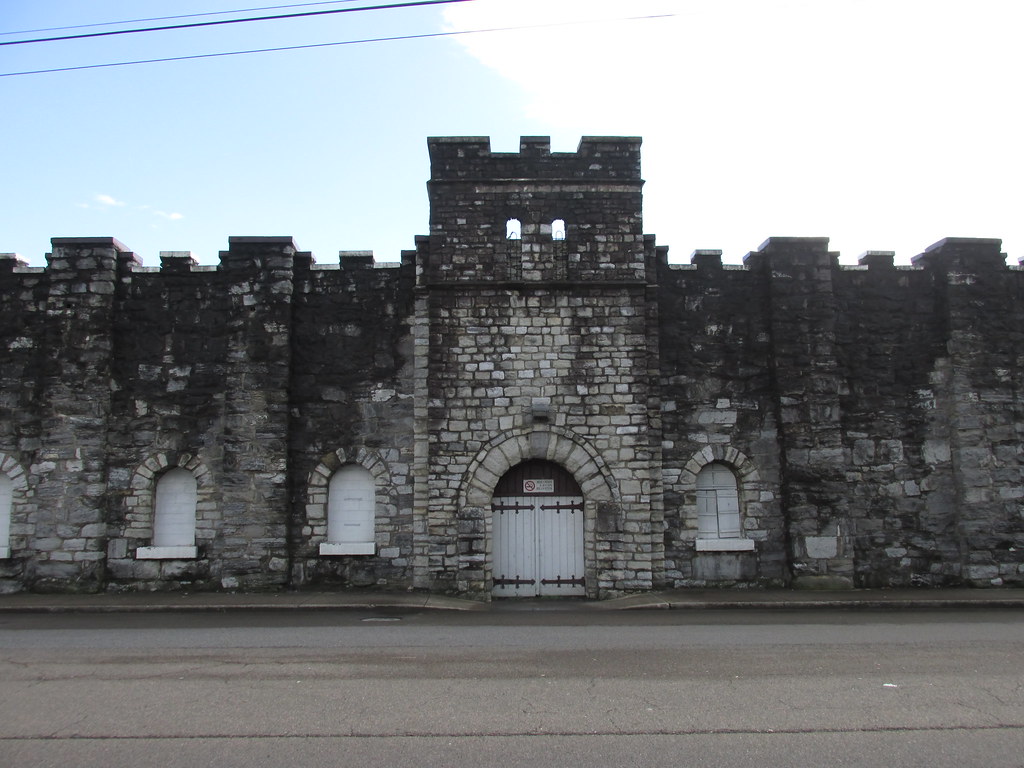 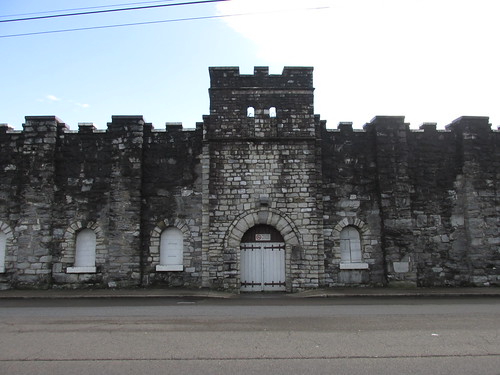 This was the second time I had seen teams from one state play games in another. In 2019, I was at two games at the Fargodome in Fargo, North Dakota. Those four teams were playing Minnesota playoff games. In this case, it was two Virginia schools playing Tennessee. Same with the eventual night game.

This was a very close game. Though Grundy struggled to take advantage of some opportunities. They’d end the game with a redzone stop by Virginia. Virginia would win, 19-12.

The rain wasn’t too bad, though did pick up through halftime. After the game, it was off to Bristol Motor Speedway. Mostly to kill some time. And despite my several trips to and through Bristol, I had never stopped by the race track. Considering it’s one of my favorite NASCAR tracks.

Surprised I've never take the side trip to see this track. Even when I've been in Bristol, Tennessee for a football game previously. #roadtrippin pic.twitter.com/oQza7wVnvo

After that, it was to see the Bristol sign, and then back to the stadium to wait. Or so we thought. The southside lights were out with work crews there from the electric company. Luckily they did get them going before the game started.

Unfortunately, this wasn’t much of a game. The size disparity between the lines for Abingdon and Gate City would make this one a one-sided affair. The ‘homestanding’ Falcons would score on the first play of the game. And rack up a 48-14 halftime lead. Just one point shy of a running clock.

The second half was a slow affair. Though the rain was subsiding. Although I did get run into on the sideline and the end of my monopod snapped. Though luckily I’ve since been able to bend it out straight so it’s servicable again.

After that in the fourth quarter, I went up to the stands to wait out the end of the running clock contest. Abingdon 62, Gate City 20.

After that, it was a 351mi drive back with my friend to his place. And then another 175mi to mine. I arrived home just before 5am. Not a trip, honestly.

Total cost was $170.94 for the three game weekend. Total miles was 1,213. Most of the cost was food, and splitting the hotel cost for Friday night. 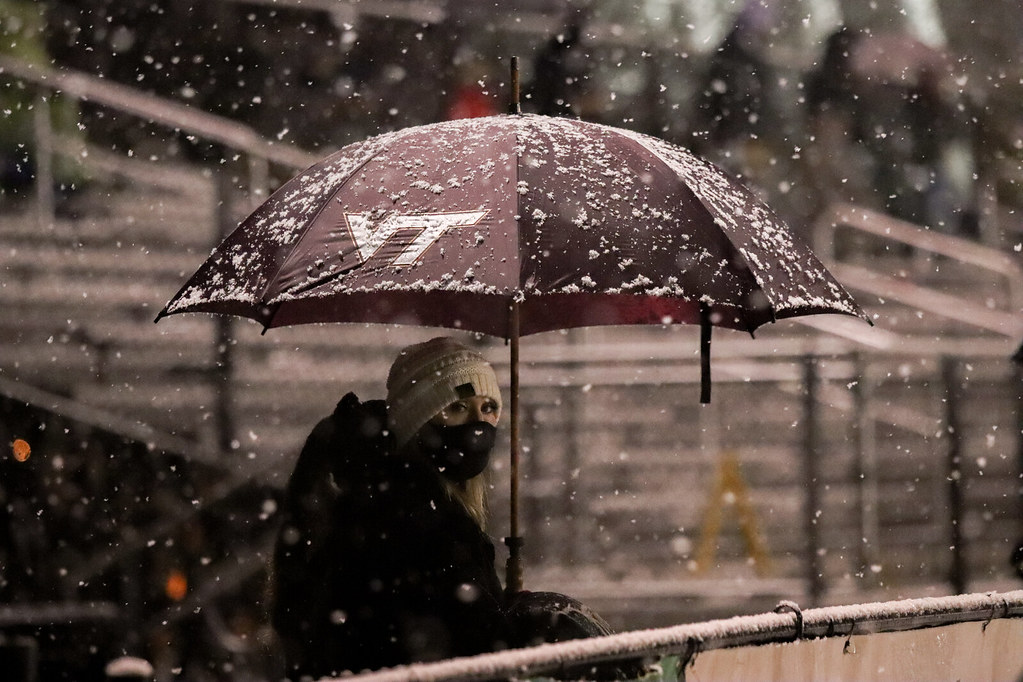 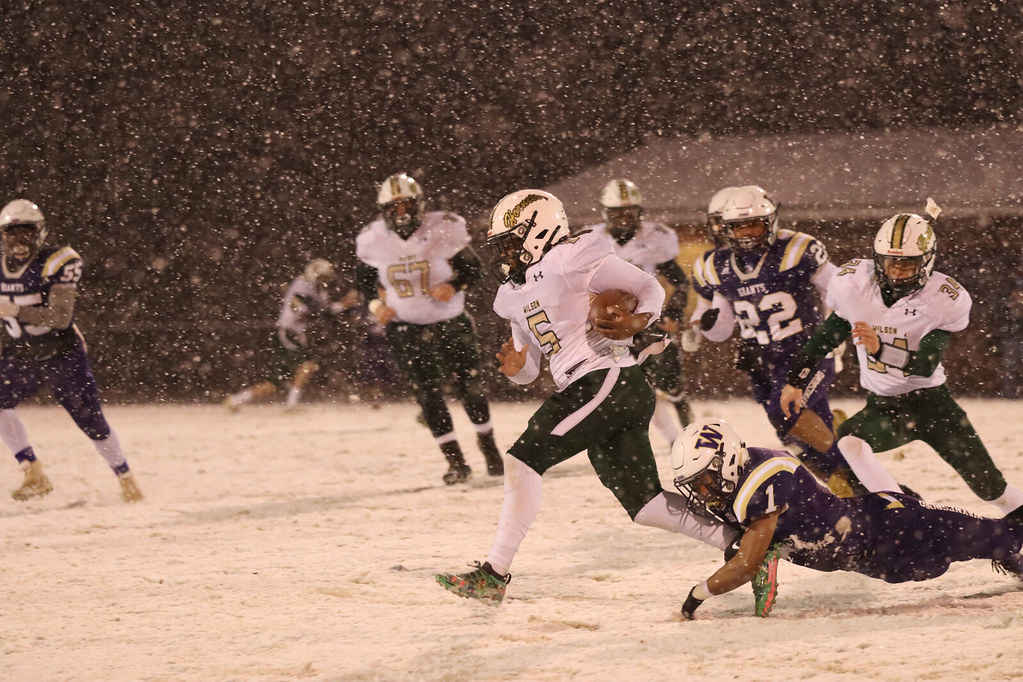 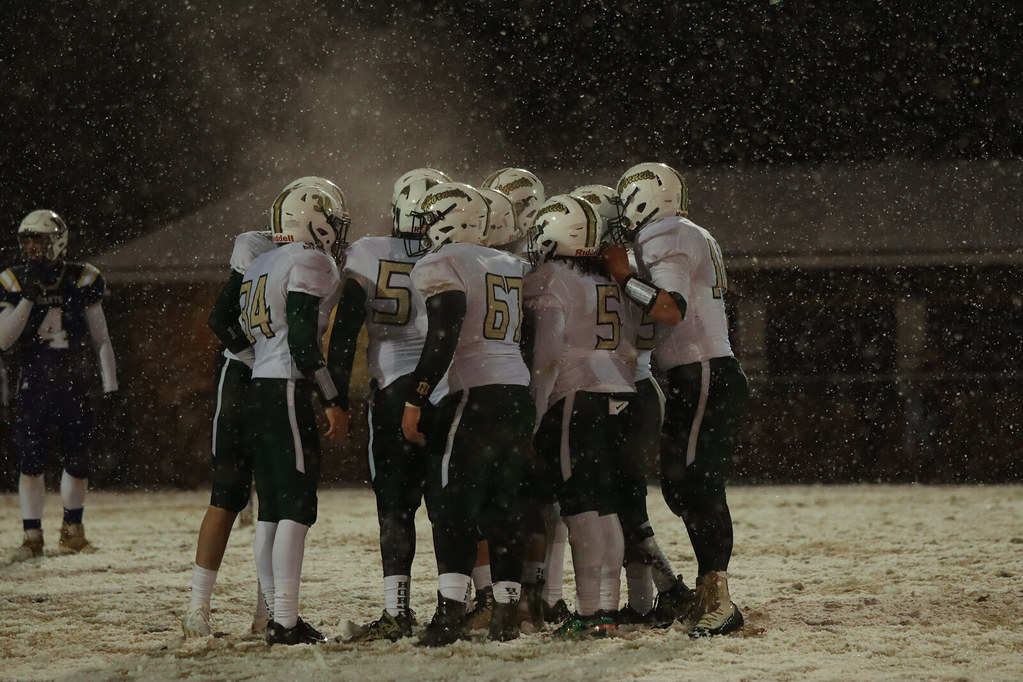 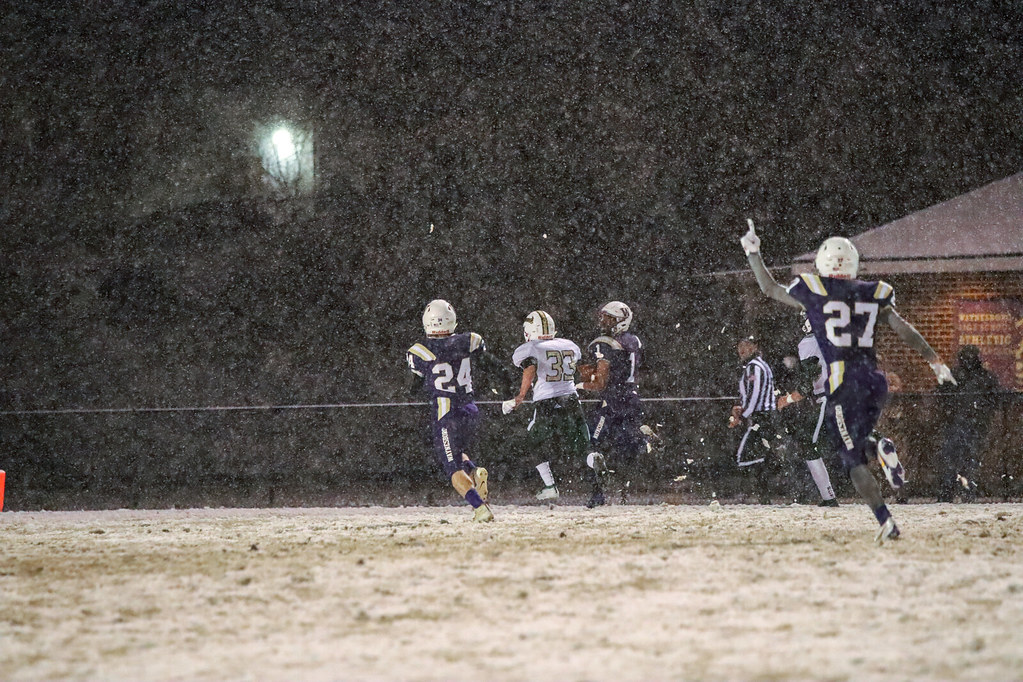 Little Giants On The Board 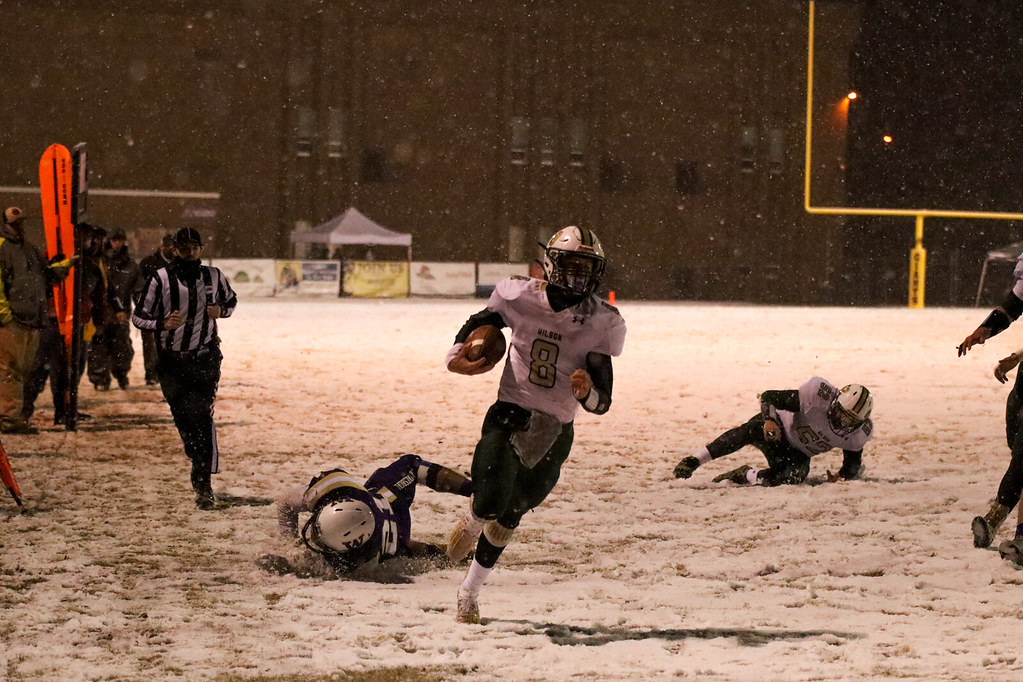 Over the river, and through the woods. 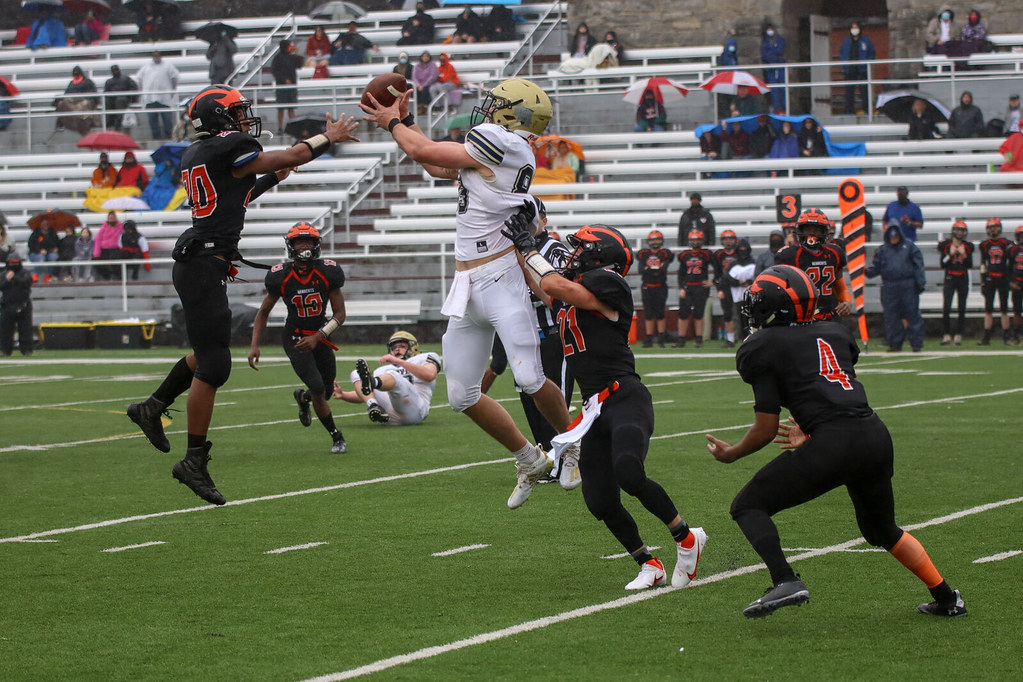 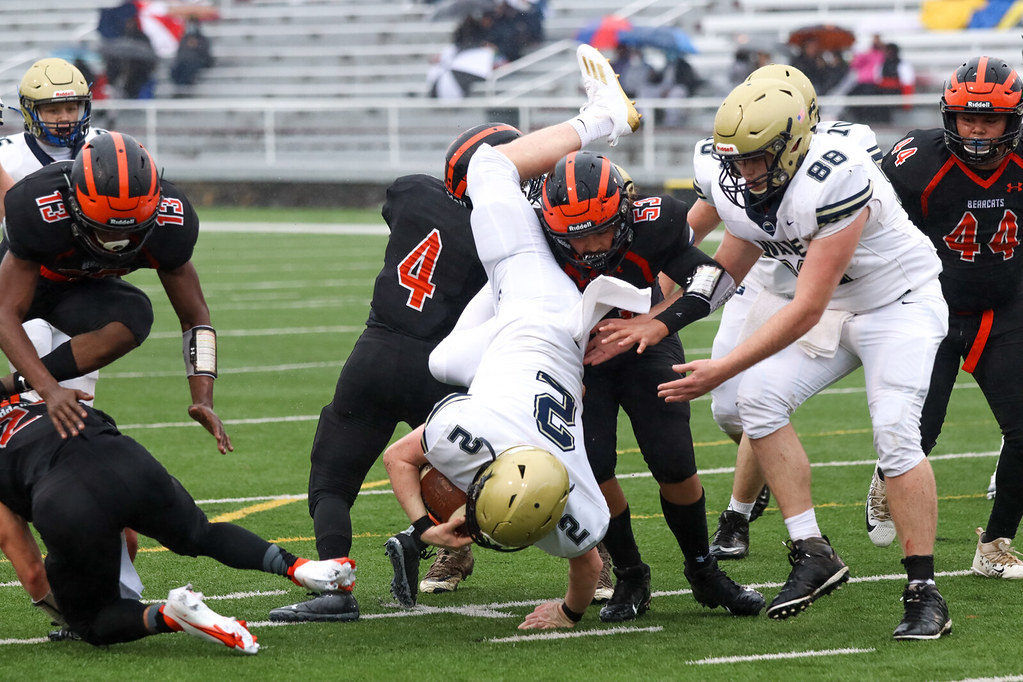 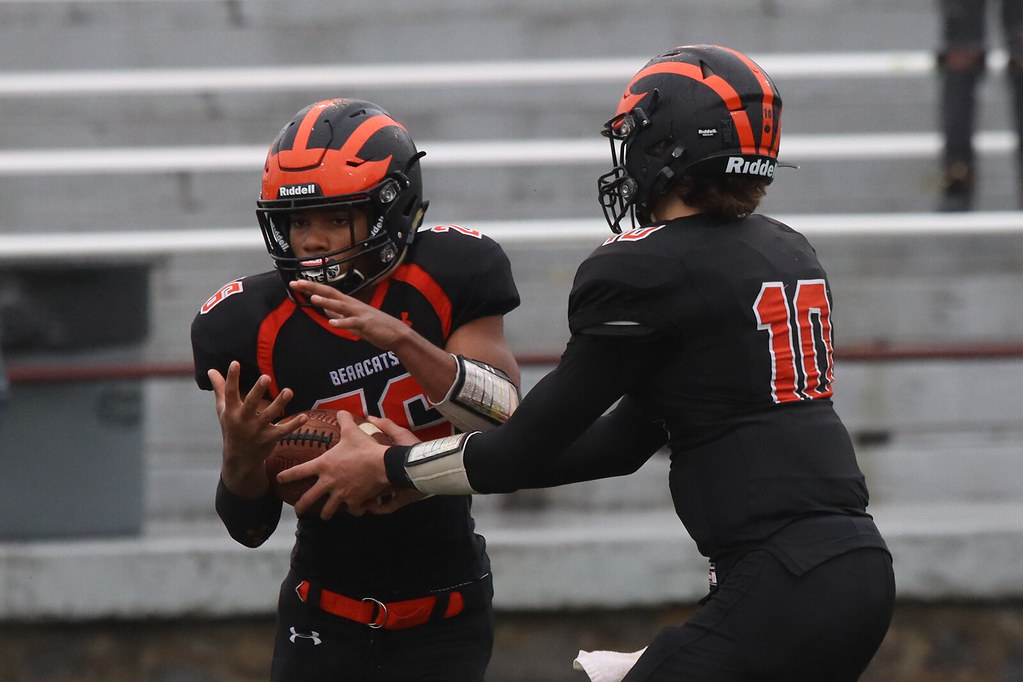 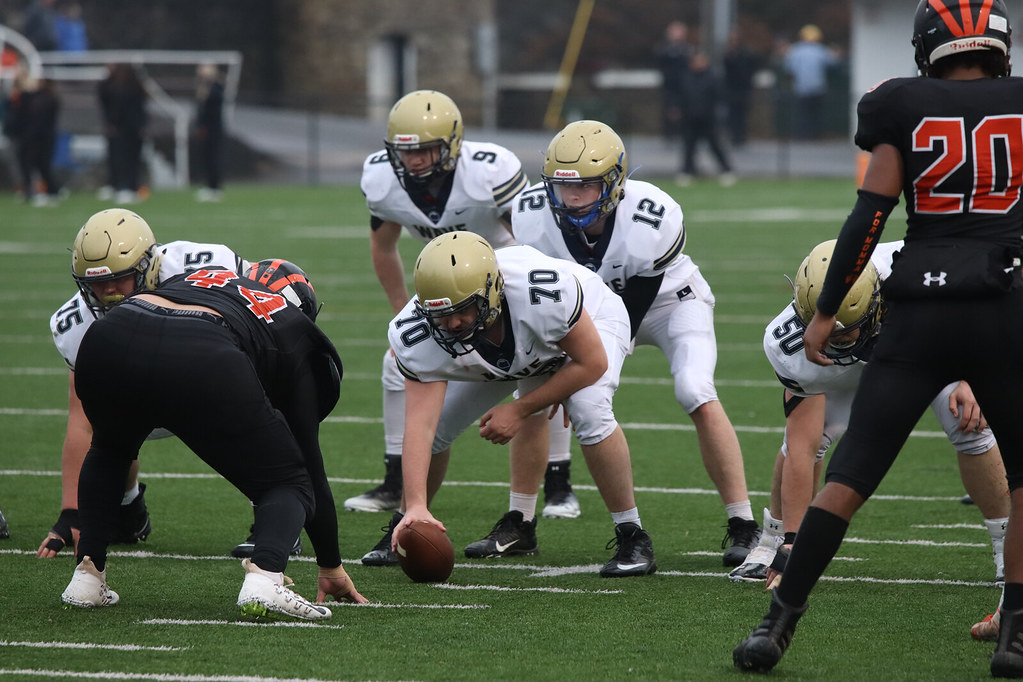 Where it all starts. 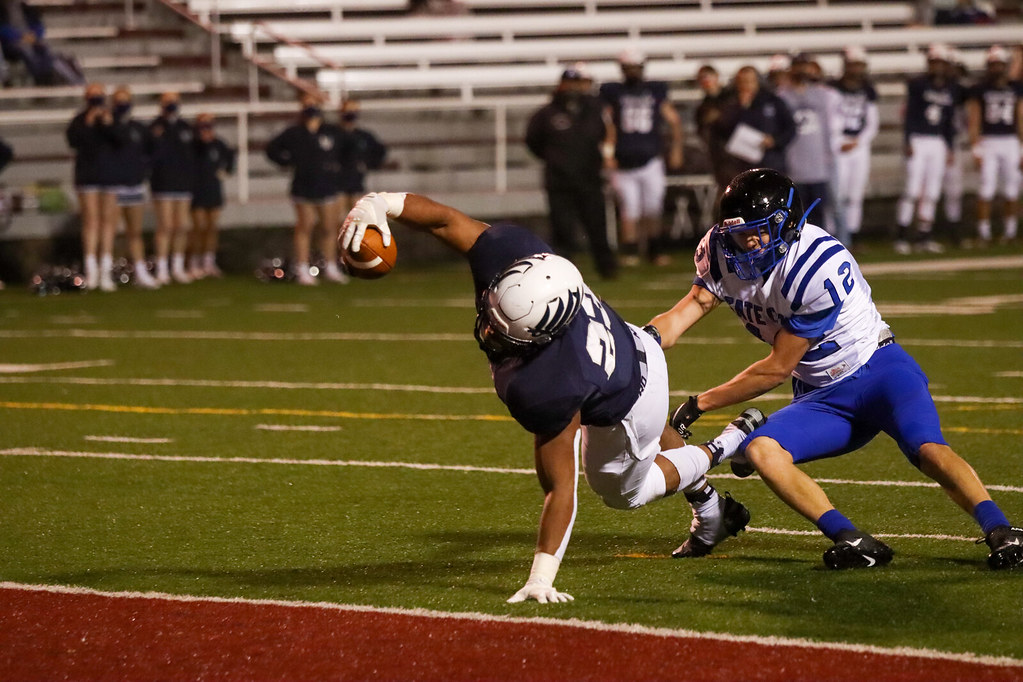 Getting the extra yard. 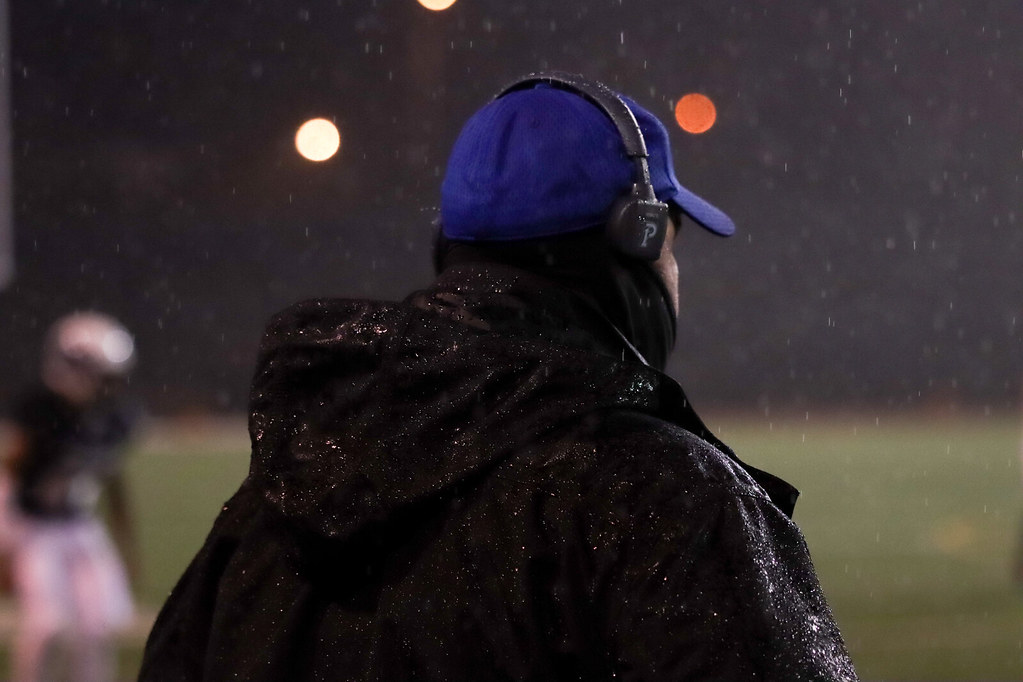 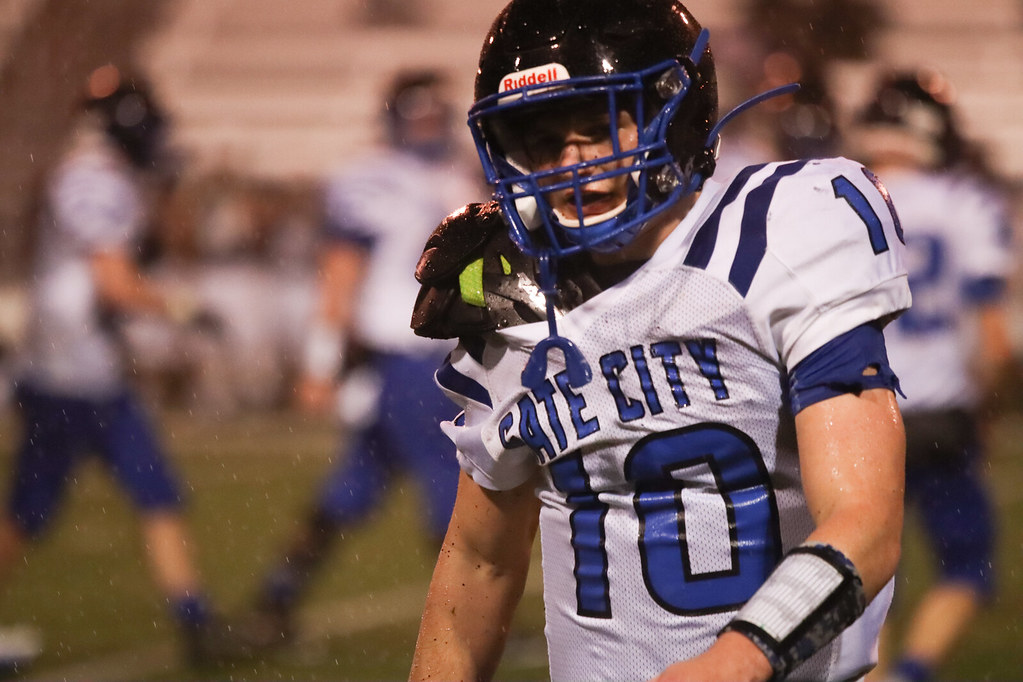 No one said it would be easy. 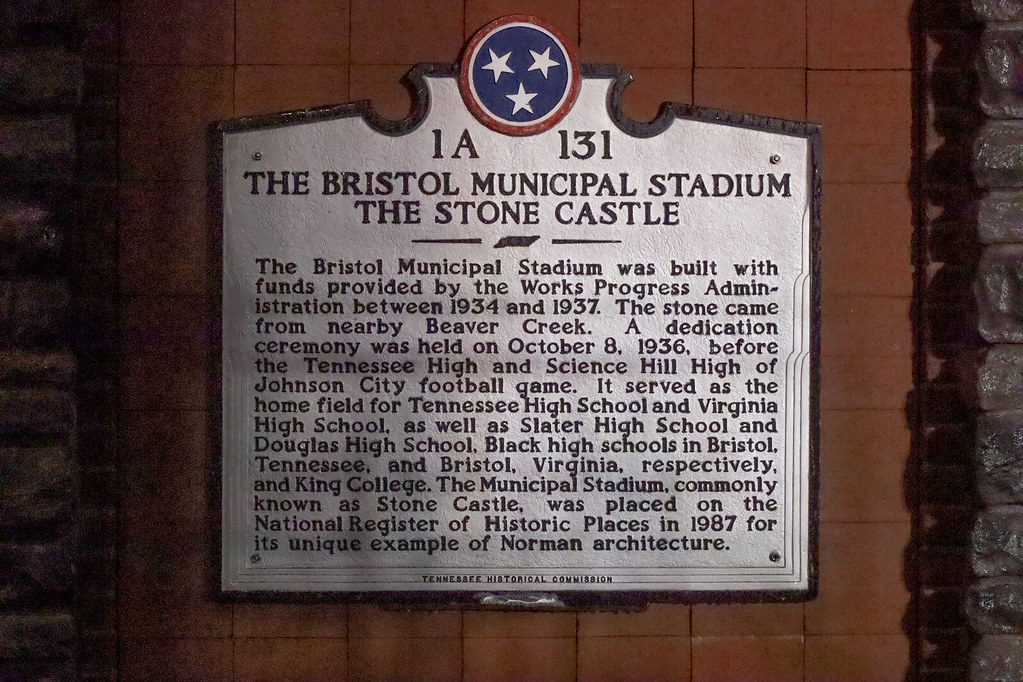 I honestly never thought I’d be back to the Stone Castle. Let alone for two more games. But, 2020/2021 has ways of surprising you.

Well, since this is already a week late, I know what I did. But, the plan was two more games in Virginia. With the distant hope of a Saturday night game. Which never materialized.

Called Wise Central about a Saturday afternoon game, to find out I had the schedule wrong. I had also called Graham (Bluefield, VA), and Hurley about afternoon games. And then was going to find a Friday night game (probably Pearisburg’s Giles High School). Only to find out Wise Central was playing Friday night and and Eastside was hosting at a game at Central on Saturday afternoon due to having turf. This meant one of three real games. Virginia, again, or Hurley or Graham. Confirmed with Hurley, so that’s where I went. And I’m so glad I did.

For all that 2020 and 2021 have done, I gotta say sometimes things just work out. And seeing The Cliff was more than things ‘working out’.