This was my last planned week in Philadelphia this spring season. Only one more weekend. But, I had already committed to New York’s Section 6 for the next two weekends. Until then, southeastern Pennsylvania would be my base of operations.

But, the long trip wasn’t without its issues. Primarily, my daughter’s birthday was on Sunday and we had planned a small party for her. Her second such birthday without a true ‘party’. Instead, just a small group of family. All of which now are vaccinated, though like me a few aren’t the full two weeks through.

So, with that in mind, I wasn’t staying in Philadelphia for the Saturday night game. Of which, there was only one game, in Germantown, that I would be giving up.

So, then it was a matter of which games would make up the last three of the season. Originally, I had planned for three new stadiums. Central, Edison, and Bartram. But, then things changed quickly.

Tonight I'm at Widener Memorial School Field for a game between the Central Lancers and the Roxborough Indians. Kickoff is at 3pm. #113 @PaFootballNews pic.twitter.com/OrCU7nfXlO

Another naming issue with this one. The outside wall surrounding the stadium and ballfield, simply says “Widener Memorial School”, which was the old school that existed on this site, and the field behind the school. Hence my choice of name. If it does have something official, I haven’t seen it anywhere.

But, the stadium itself is nice. It’s seating is on both sides of the field, sandwiched between the hillside the school sits on and the street behind the visitor stands. The stands are narrow but run for a considerable length of the field. The field is grass, though in decent shape. I parked on the street just behind the visitor stands, and walked down the field to the softball field where the entrance is. And then back up the steps to the football field.

Now, this stadium does have some stellar views. Like West Philadelphia, the backdrops surrounding the field are great. The hillside, the townhomes, the highrises. All of it. It’s definitely one that’s kept its character through the years.

The game, itself, though was over quickly. Central’s offense wasn’t the only factor. Their defense and special teams aided in the scoring. Roxborough’s offense struggled, and Central was up 28-0 after twelve minutes. The second quarter wasn’t much better, as Central tacked on two more.

That meant the running clock was going. Which helped me with my plans for a 7pm game in Norristown. Roxborough did finally get some scoring going. But it wasn’t nearly enough as the game was never in doubt.

This let me get a head start on Norristown. Leaving through northern Philadelphia and out route 309. Cutting northwest past the turnpike to Norristown, I arrived over an hour early for Norristown.

Tonight I'm in Norristown, Pennsylvania for a United Ten game between the Norristown Eagles and the Reading Knights. Kickoff is at 7pm. #114 @PaFootballNews @NtownFootball @RDGschools @GriddersRed pic.twitter.com/p5cDWamqjs

This was a United Ten game. A group of 10 teams outside of Philadelphia that banded together to form a cohesive league for the spring season. Five northern teams (Reading, Norristown, Father Judge, Harry S Truman and Cheltenham) and five southern teams (Interboro, Penn Wood, Academy Park, Chester, and Chichester). Of them, I had seen Truman, Cheltenham, Academy Park, Chester, Chichester, and Penn Wood. This was the weekend of the championship game, and the other eight teams could play ‘cross over’ games. However, no one did.

But, Reading and Norristown had arranged to make up their unplayed game from earlier this season. So, that’s where I headed on Friday night for a make-up game of sorts.

Now, these two were fairly evenly matched at the start. Norristown certainly had the edge. But, it was close. But, the Eagles scored once late in the opening quarter. But, the second quarter saw the second Norristown TD about halfway through open things up. Reading began to breakdown. The third and fourth scores happened easily. And then it was over. It was just a matter of how badly Reading would get beat as their offensive line was futile in their blocking, and their defense languished against a methodical attack by Norristown. Adding three more touchdowns in the second half. Norristown 43, Reading 0.

After that, it was a long drive back to the hotel and I was too tired to finish photos from the day. Instead, just getting to sleep early (about 3am), and planning an early start to Chester for the afternoon game.

I left the hotel just before 11, and had a roughly 40 minute drive to Chester. I stopped for something to drink, and as I just got back on US1 to head over to I-476, I got a call that the game was cancelled. Covid-19 on Truman’s team was the undoing.

So, now, there were only two games left on the schedule. A 1pm game at Germantown between MLK and Belmont Charter. And noon kickoff at Frankford. I was 31 minutes away from Frankford, and it was 11:30. And that was the game I was asked to cover since Dave was at Germantown and we only had a dedicated photographer at Frankford. Even though I’m not much of a reporter. And with the late start, I wasn’t going to get much of an article together. And, I still haven’t as of Tuesday night. Though I will write something about it. I did get there at kickoff. As they had to open the gate for me.

This afternoon I'm at Frankford Stadium for a game between the Frankford Pioneers and Boys Latin Charter Warriors. Kickoff was 5 minutes ago. #115 @PaFootballNews @FkdFootball pic.twitter.com/enTTQ4JwgW

I just got my camera situated and got my pregame tweets going as the game started. And then two scores happened. Boys Latin, going away from the entrance, scored first. And as I’m trying to get that documented, Frankford storms down the field and scores as well. With a lack of a working scoreboard (it had broken while I was at their game against Roxborough), made getting things situated difficult.

I was dreading a high scoring game. As the first two drives indicated. But, then things slowed to a crawl. It stayed 6-6 through the first half. Before Frankford would score in the 3rd quarter. I’d get run into on the two-point try and break my monopod once again. While I was dealing with that, Boys Latin Charter went right down the field away from the scoreboard end for a TD. And a two point pass to take the 14-12 lead.

In the fourth quarter, a well officiated game went a bit wonky, with a motion penalty on a spike attempt. Not having set for the play. But, despite the yardage, Frankford moved the ball enough that they got one field goal attempt. Same as they had for the PAT to start the game. But, again, it was missed. Wide right. And that’s how it would end. One of the better games this spring. Boys Latin Charter 14, Frankford 12.

During the game, others froM PFN showed up from the now cancelled Chester-Truman game. And we then headed up to Germantown to see the end of that game, if at all possible. However, the fourth quarter moved quickly, and I arrived just as the final play was ran. Then, the four of us moved over to Scoogi’s. The restaurant we had eaten at the previous Saturday.

Last week, I had eaten the Short Rib Ravioli. However, this week, I had one of the specials. A 14oz Lamb Chop.

Everything at Scoogi’s was amazing. Including the Bacon Spinach Honey Mustard Pizza we had ordered as an appetizer.

After that, I drove home, dropping off Phil along the way. While Dave and Billy went to cover the Imhotep Charter-Olney Charter game at Germantown.

I got home a bit before midnight. And then got to put together a Barbie Dream House for my daughter and then wake up early for her to have her birthday gifts from us. Including the gargantuan dream house that now dominates my living room. Though, she absolutely adored the gift. 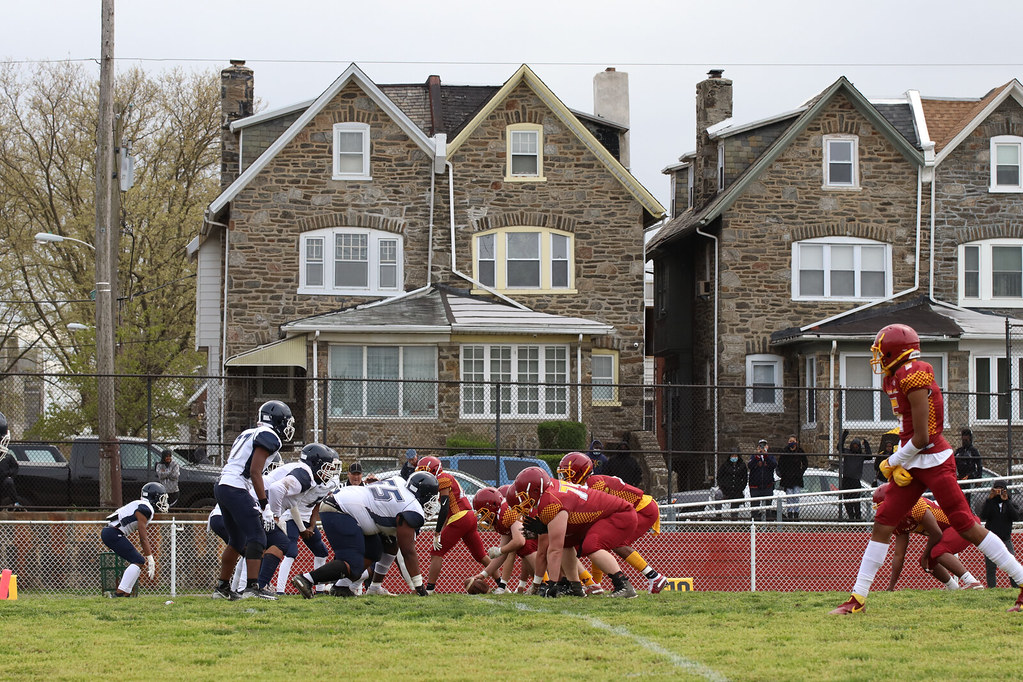 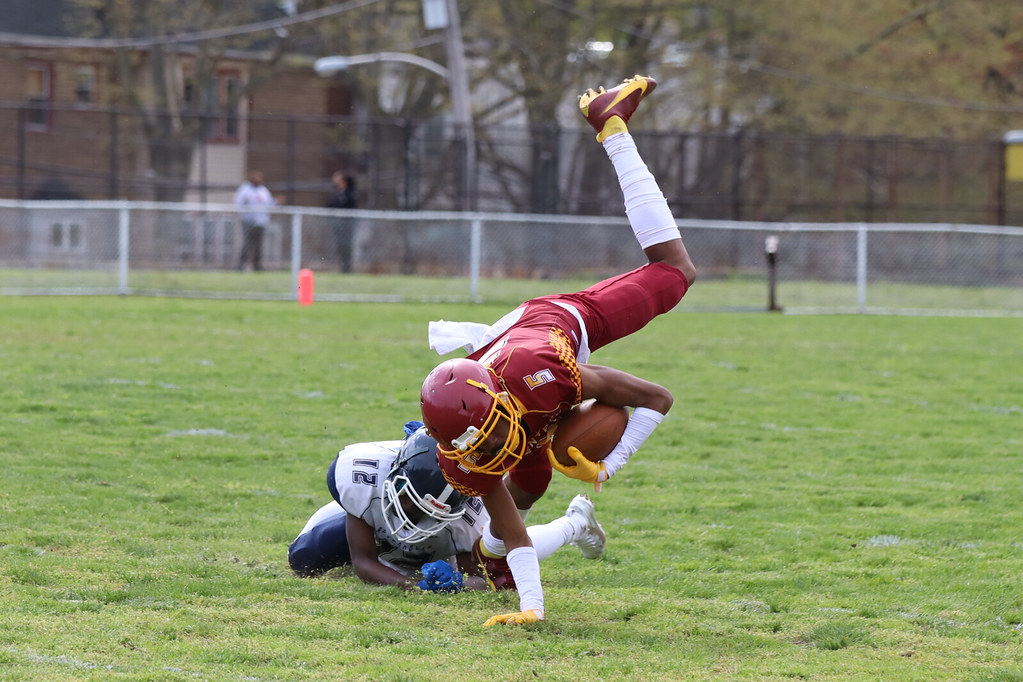 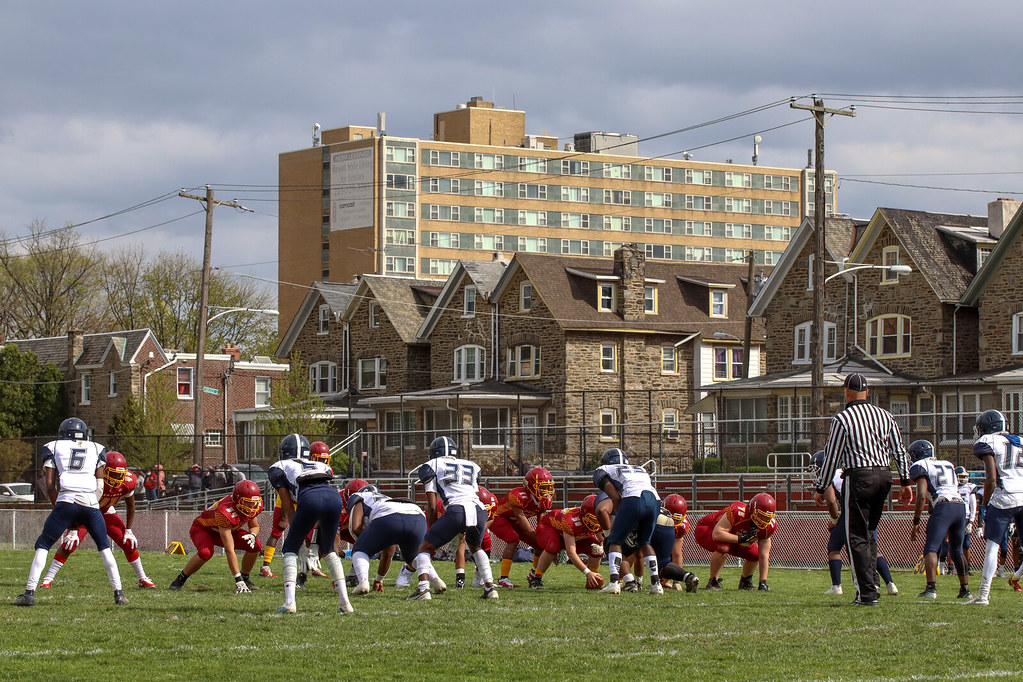 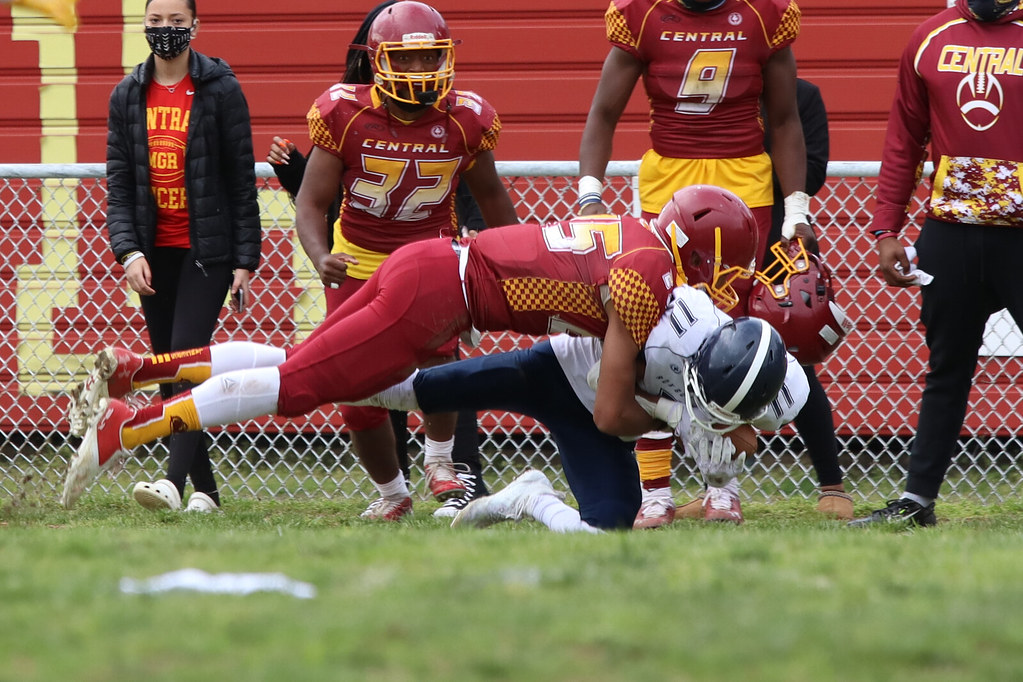 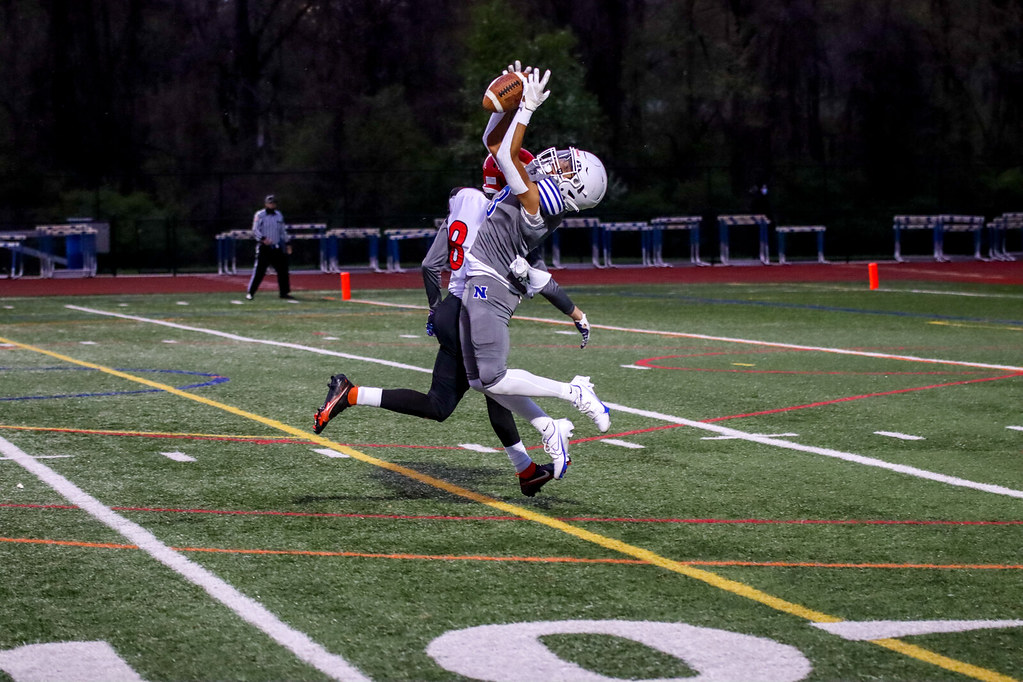 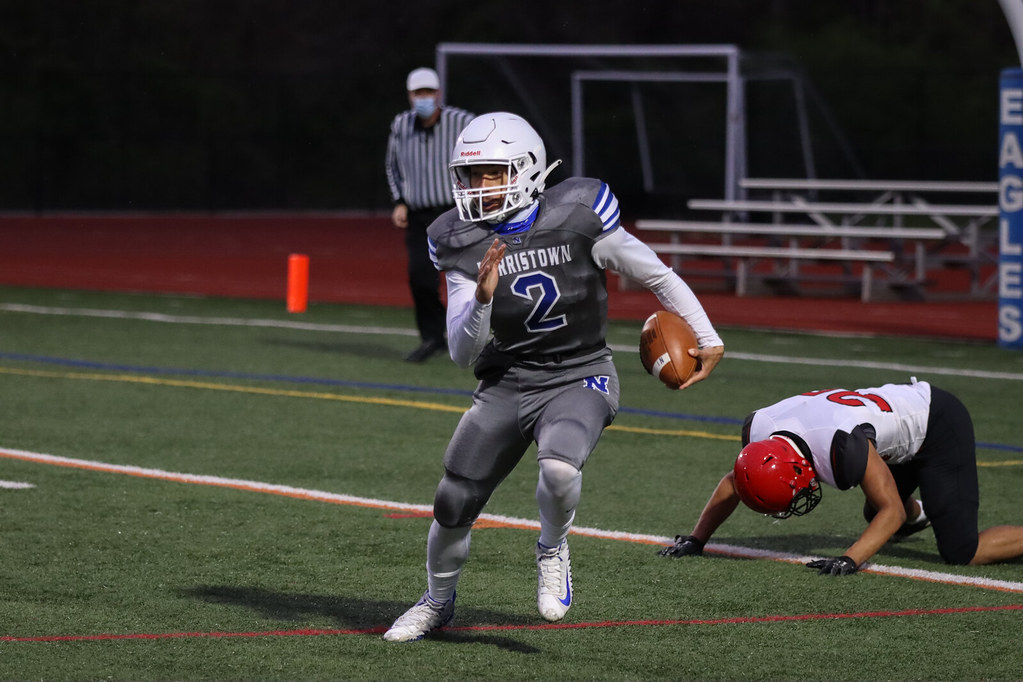 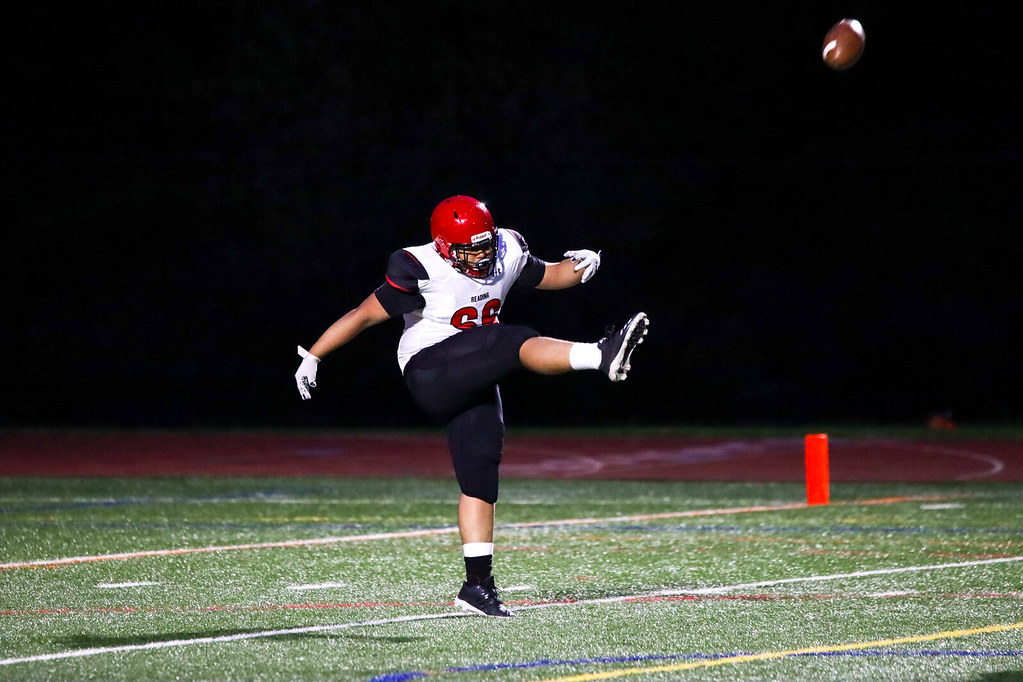 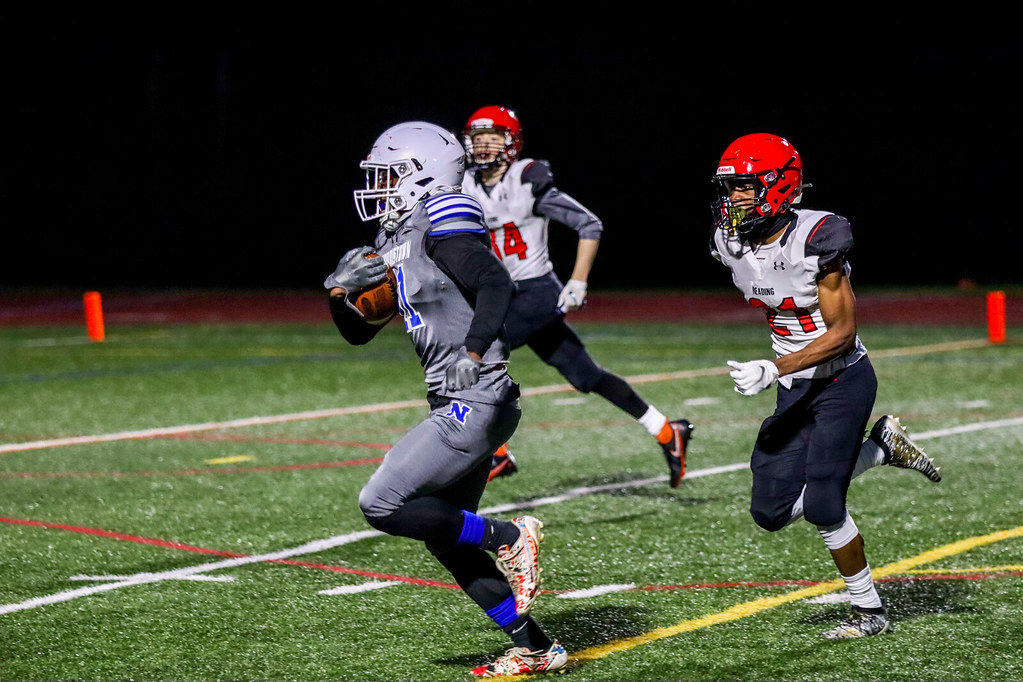 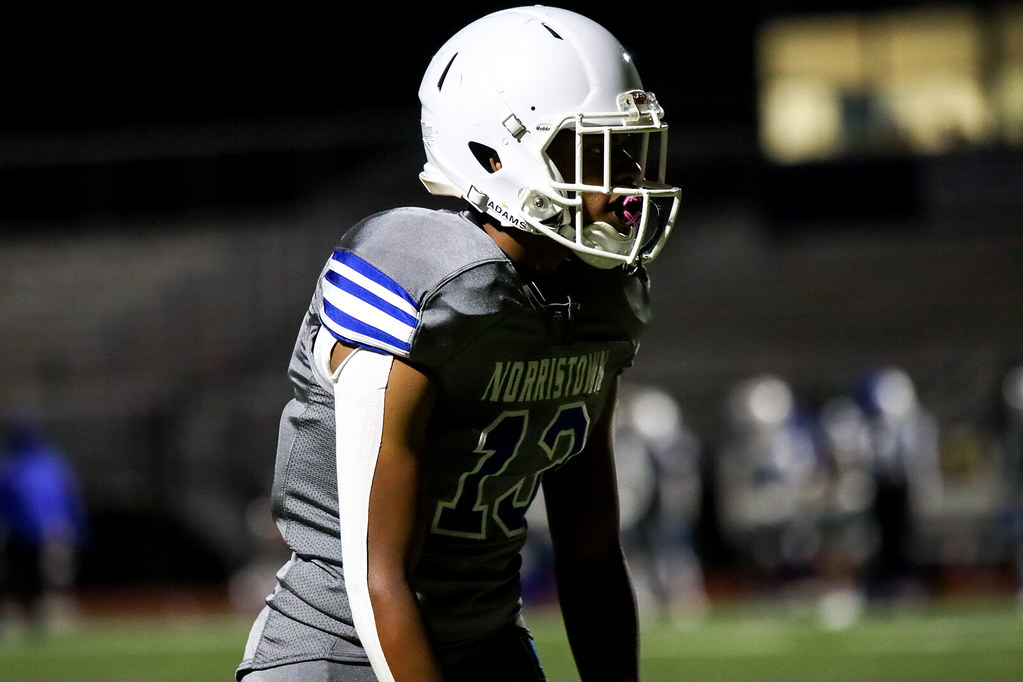 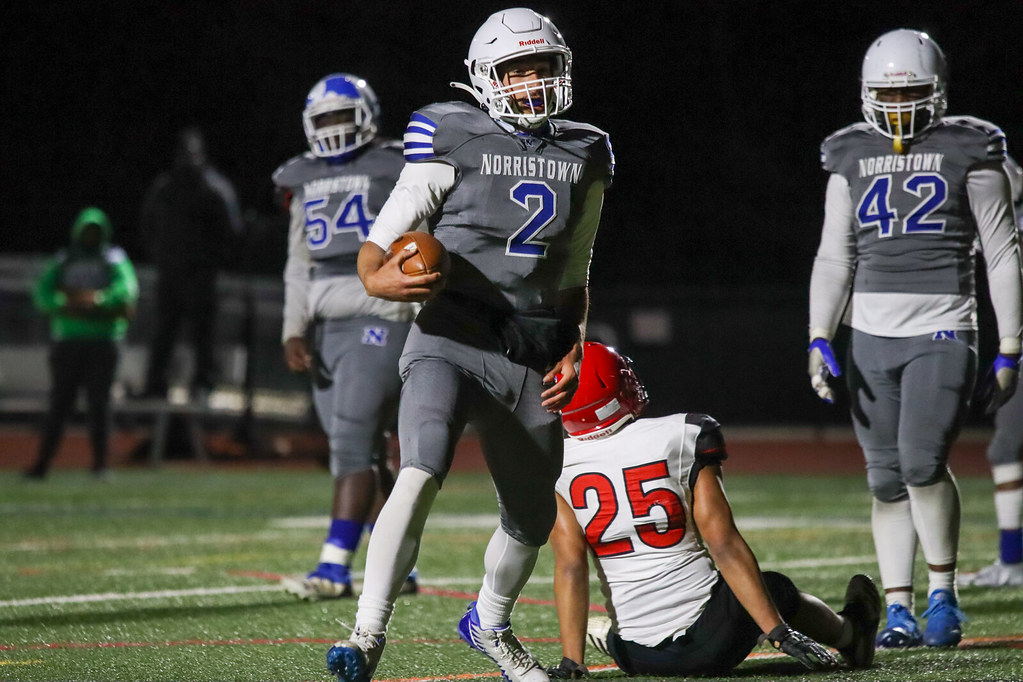 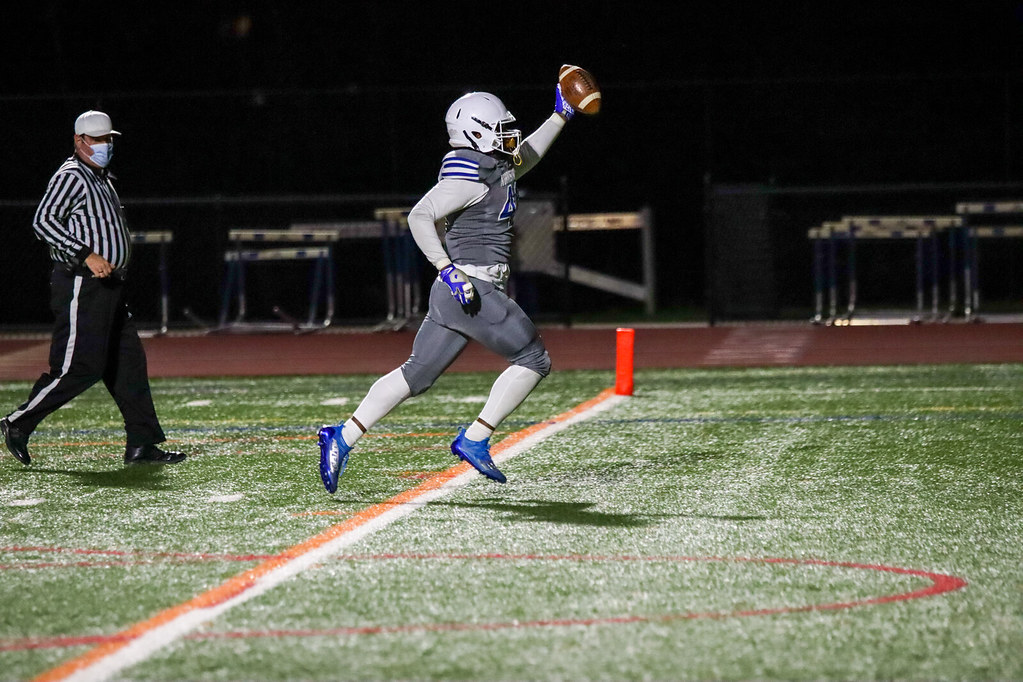 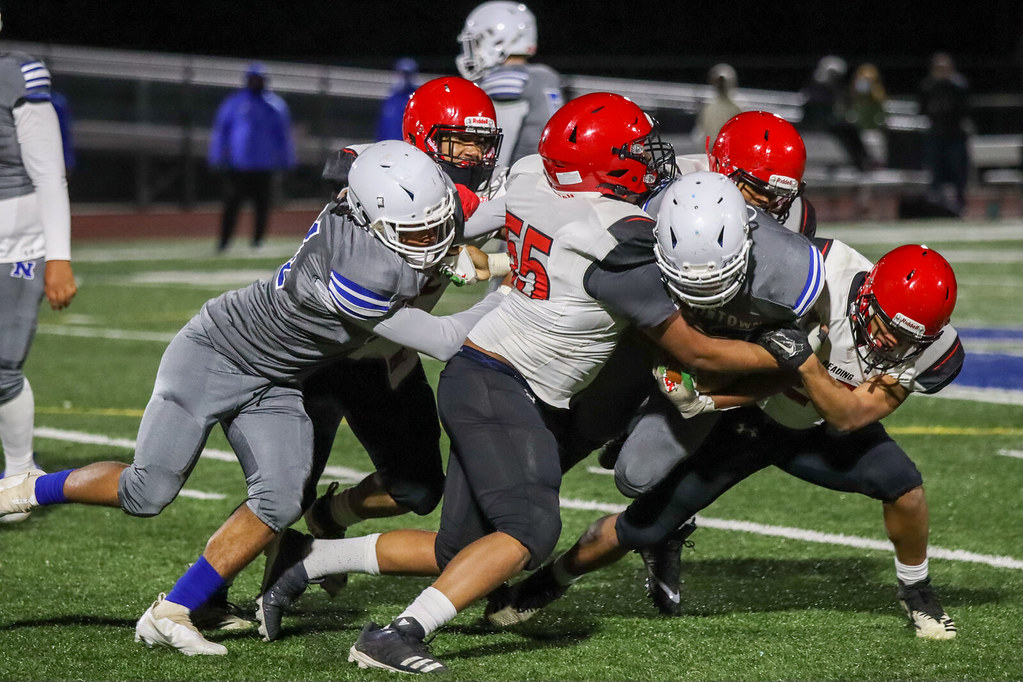 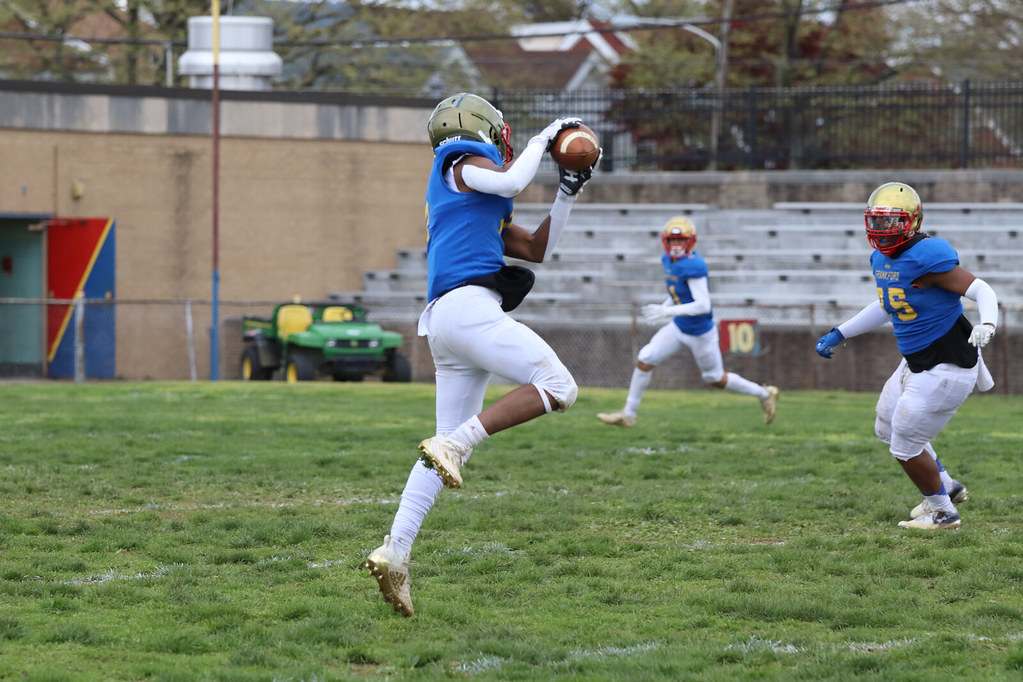 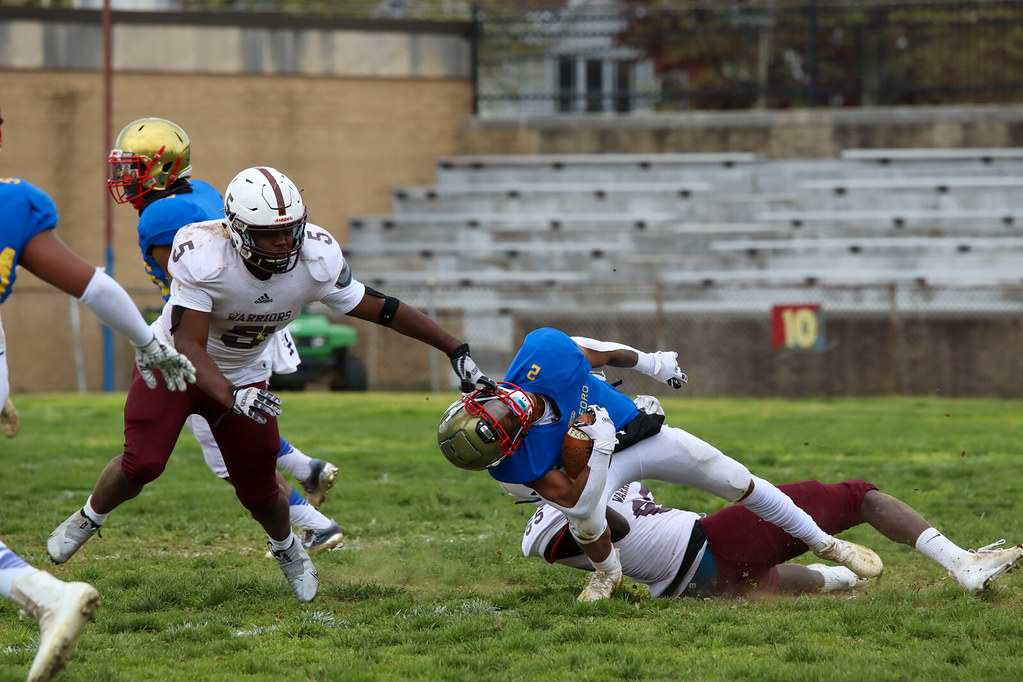 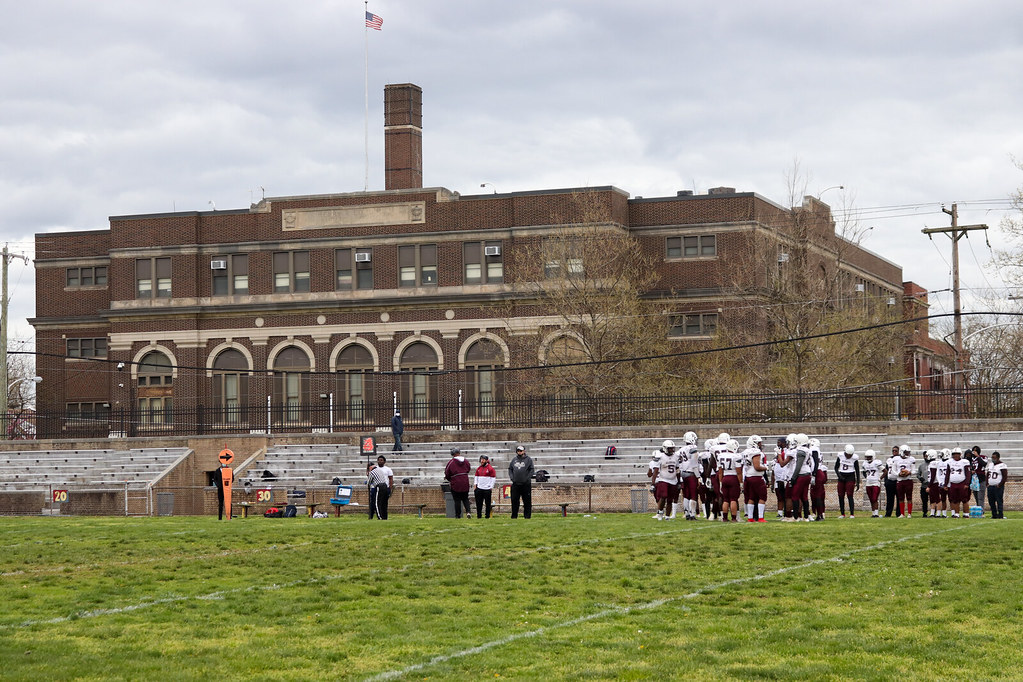 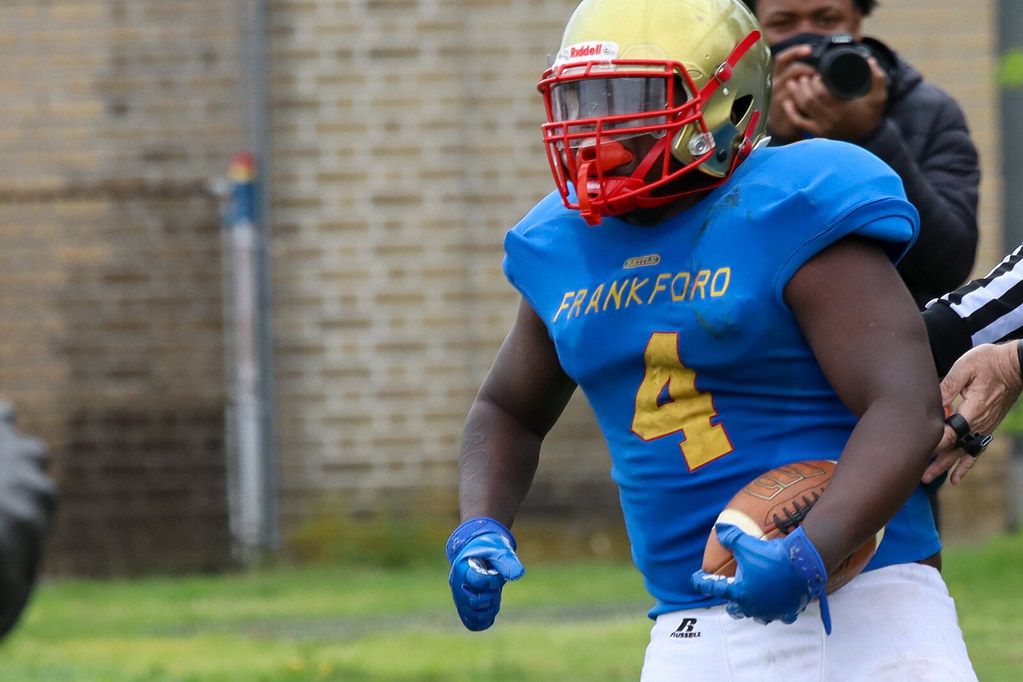 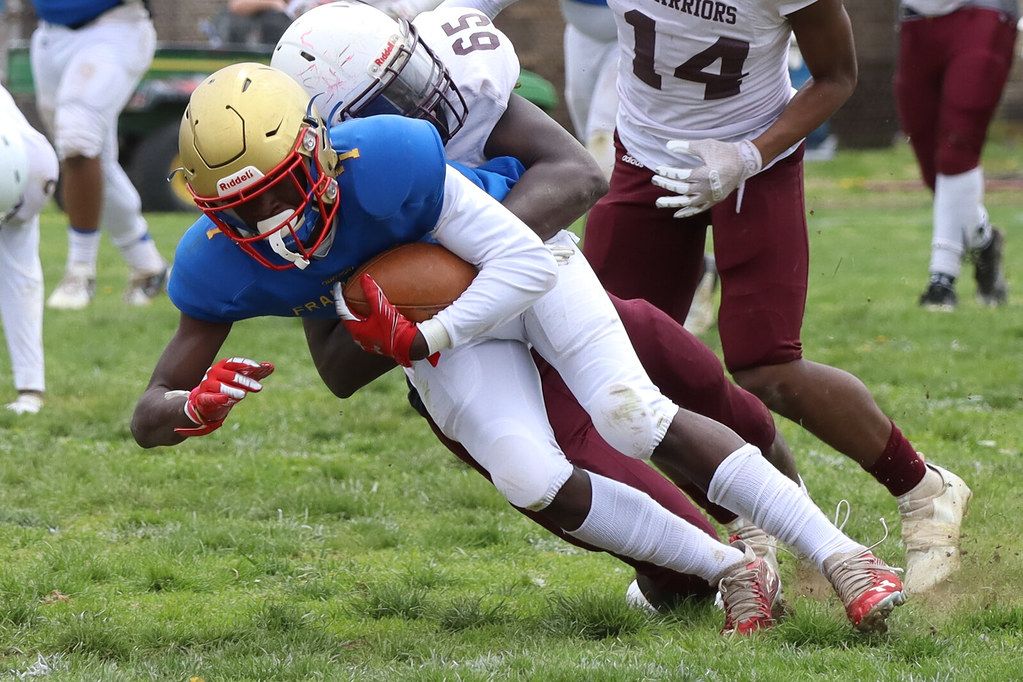 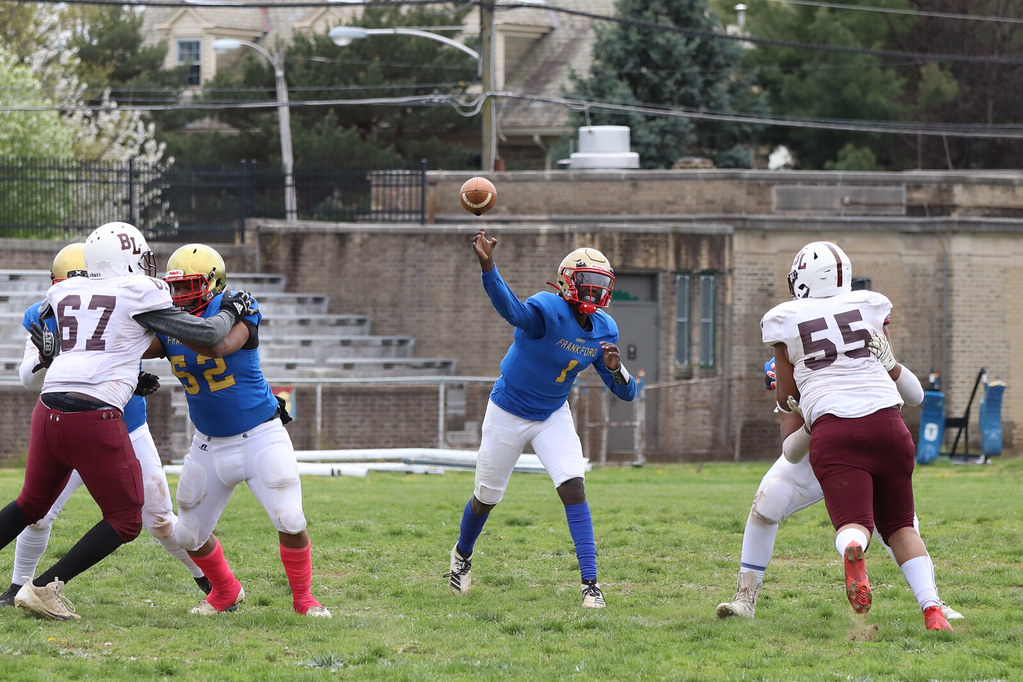 My plans take me back to Western New York. There’s games on Monday, Tuesday, Thursday, Friday, Saturday and Sunday. And though I’d love to spend a week in New York, prior plans take precedent. So, I will be just doing three games this weekend. Friday night I’ll be just north of Niagara Falls. Lewiston-Porter, located just east of Youngstown, New York, is hosting Iroquois. It will be my first time ever seeing “Lew-Port”. I saw Iroquois previously. On Saturday, it’s a day-night doubleheader. Clymer/Sherman/Panama is hosting Falconer/Cassadega Valley in Panama. Seen both teams previously, and been to a game at Panama when CSP beat Salamanca, 40-0 a few years ago en route to their first of two straight defending state championships.

At night, it’s a short drive north to Silver Creek. Where Silver Creek/Forestville host the Maple Grove Red Dragons at the Grape Bowl. The game was originally scheduled for Dunkirk, but is being played at the grass field in Silver Creek. Rain is forecast, so we’ll see the field conditions. Meanwhile, Silver Creek just played at Cattaragus-Little Valley on Tuesday night. Necessitating the Saturday night kickoff.

Though I’m not making it for the Thursday game, there is the possibility of a Sunday afternoon game. Though that currently looks doubtful as well.