This week went mostly to plan. A trip up to Clymer, New York after just being there twice in the spring was a highlight of the week. Also, getting a chance to see New Brighton play after my camera issues at the game last fall. Also, I had planned for two games that for different reasons fell through.

Early on, I had given up hope that Cathedral Prep hosting a game on Thursday night. Their matchup with West Toronto Prep was not going to happen. They did schedule a game against Erie. A rematch from Week 1. However, it was going to be played once against at Veterans Memorial Stadium. So, I passed on that game.

The backup game was Conneaut hosting Oil City in Linesville. A place where, in my first regular game covering for PFN, I was at Cash Field for their matchup with Meadville in 2018.

Tonight I'm in Linesville, Pennsylvania for a Thursday night game between the Conneaut Eagles and the Oil City Oilers at Cash Field. Kickoff at 7pm. #15 @PaFootballNews @tcjones2007 pic.twitter.com/8iVAKxHtxh

This was a great game. Oil City jumped out quickly with two scores. Including a 75 yard TD on a punt return. That 16-0 lead evaporated when Conneaut scored three times in the second quarter to take the lead. But, missed two-point tries on each one. Only leading 18-16. Oil City then came back with a TD in the 3rd to lead 24-18. The difference being the two-point conversion success rate. The Oilers added two more in the fourth to win comfortably, 38-18.

I then headed back home while hearing recaps of the end of the Erie game. Which ended early thanks to panic in the stands that someone had a weapon.

The next afternoon, I had to stop in Boardman before making a bee line to Rochester. I shunpiked, and took route 51 toward Beaver Falls and got into Rochester shortly before the planned kickoff. The parking was minimal, but got to an open spot behind the home side.

Tonight I'm in Rochester, Pennsylvania for the Gold Star Game between the Rochester Rams and New Brighton Lions. Kickoff is set for 7pm at Rochester Stadium. #16 @PaFootballNews @AJWPIAL pic.twitter.com/EDSiGvKqC5

This was the Gold Star Game. A matchup scheduled for Rochester to pay homage to veterans. A grand showcase was setup for pregame including a large array of flag bearers and honorees. The game was delayed before kickoff when one of the participants suffered a medical issue on the field and had to be carted off quickly to a waiting ambulance.

The stadium in Rochester is one of the old school fields with stands only on one side. Facing into the sun though up on a hillside in Rochester. Rochester Stadium though is a relic and a palace to high school football.

The next morning, I left home for a bit of a longer trip than usual. A two hour trip to the far southwest corner of New York. Clymer was hosting the CSP game to open their season.

Clymer/Sherman/Panama is a well-known co-op now in New York’s Section 6. Three small schools in the southwest corner of the start from the three namesake towns formed the Wolfpack team. Their opponent, was new to the three-team co-op. Cassadaga Valley/Falconer has had a co-op for a few years. Maple Grove had a long-time co-op with Chautauqua Lake that had ended when Maple Grove decided to go back out on their own. Chautauqua Lake had formed a new co-op with Westfield and now with Brocton.

Maple Grove then struggled with numbers and had dropped down to 8-man. A new phenomena in western New York. After trying that, they attempted to play 11-man this spring to minimal success. Switching back to 8-man this fall had fall apart as lack of players necessitated an emergency co-op with someone. Anyone. CSP and Chautauqua Lake weren’t going to happen. So, they formed a co-op with Falconer and Cassadaga Valley east of Jamestown.

This new co-op isn’t quite as ‘permanent’ so litte was or could be done with the names. Instead, just adding the name to the other two. For me, I’m labeling them as Falconer/Cassadaga Valley/Maple Grove to help differentiate them from the Cassadaga Valley/Falconer convention used previously. And likely to be a rather brief co-op as it is.

I was wrong about one thing. CSP had been bumped up to Class C this past spring season. However, for the fall, Section 6 dropped them back to Class D. A surprise I hadn’t anticipated when I made that tweet.

For the game, I wasn’t expecting it to be too competitive. CSP was going through the motions of getting situated from a loss of numerous starters from last year’s Section Semifinalist. Two offensive touchdowns led to 14-0, while FCVMG scored on a kickoff return to make it close. However, CSP’s defense would hold the rest of the game while the offense would methodically get two more touchdowns, leading 28-7 after 3 and holding it through a scoreless fourth quarter. This was my third game in Clymer. My 77th such town I’ve seen at least 3 games. And CSP was now the first non-Ohio/PA school I’ve seen play ten times. Currently sitting at 9-1 in games I’ve attended.

After the game, Phil and I spoke with Coach Harper, and then headed a block over to Neckers for a sandwich. The Dutch Village was closed after the game. It was a decent sandwich. Though not heated up enough for what I would’ve liked.

I had planned to drive east to Warren for their game. But, after events on Thursday with a friend, I had to help a friend out on Sunday. And didn’t really want to factor in the two-plus hour drive from Warren Saturday night. So, the backup games were either at Fort LeBoeuf or Shenango. Shenango would be a haul to get from Clymer to Shenango by kickoff. Not really facilitating a stop for food and meandering around after the game.

But it would’ve been very close to home. Or, Waterford would at least save me an hour of driving home. Even with coverage at Fort LeBoeuf, I would be the photographer for the game. And glad that I did.

Tonight I'm in Waterford, Pennsylvania for a District 10 match-up between the Fort LeBoeuf Bison and the Grove City Eagles. Kickoff is set for 7pm at Carm Bonito Field. #18 @PaFootballNews @FortLeBoeufSD @GC_EaglesFB pic.twitter.com/LzfgHK3uz7

This would be a rematch of the first and only time I saw Fort LeBoeuf. A playoff game at Slippery Rock’s Mihalik-Thompson Stadium in 2017. It was my first time at at Carm Bonito Field, and it is well worth a visit. The stands sit high to the west, accomodating the wide sideline and track. The turf is great. And the lighting is decent for photography.

Fort LeBoeuf would go on a long drive to start the game and take an early lead. A field goal would make it 10-0 and after some back and forth hold a slim lead over the favorites. Grove City would have a few chances late. But that wouldn’t bear fruit. Fort LeBoeuf would win a workman-like 17-14 victory.

For the weekend, I drove 516 miles over the three days. Total cost was only $75.59. Most of that was food, which wasn’t much with such close games and eating at home before or after. $29.59 in gas on Thursday. No other expenses this weekend. 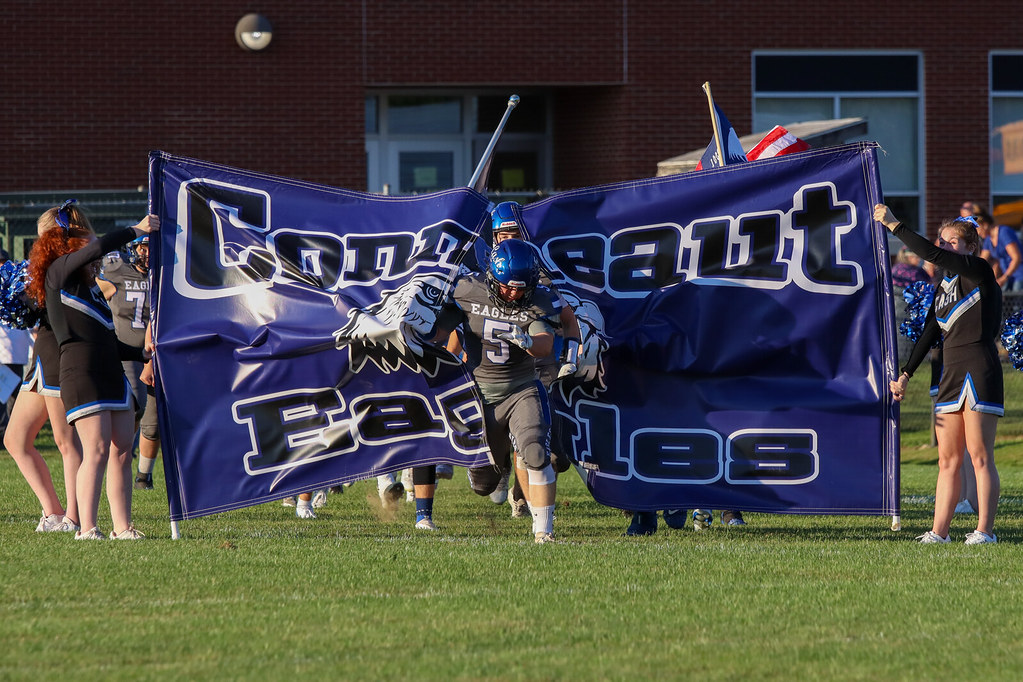 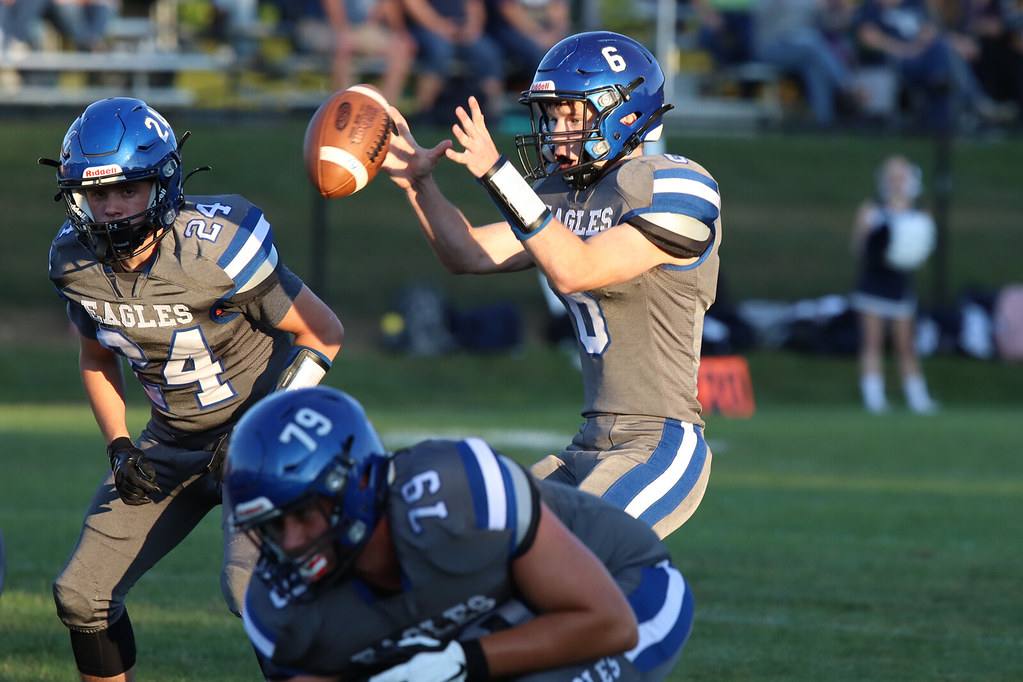 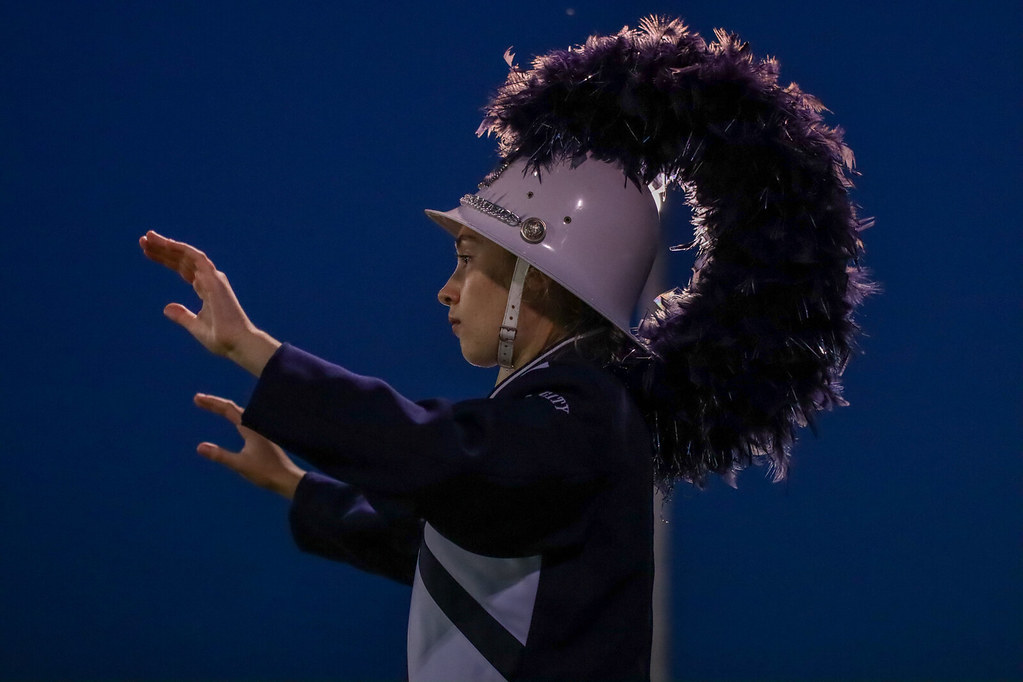 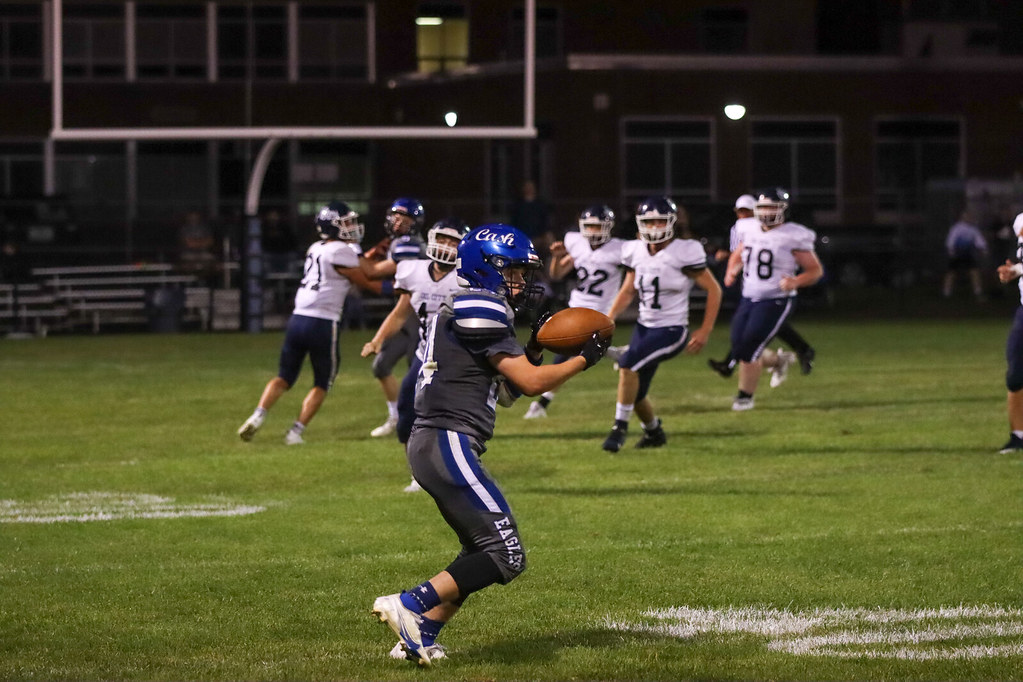 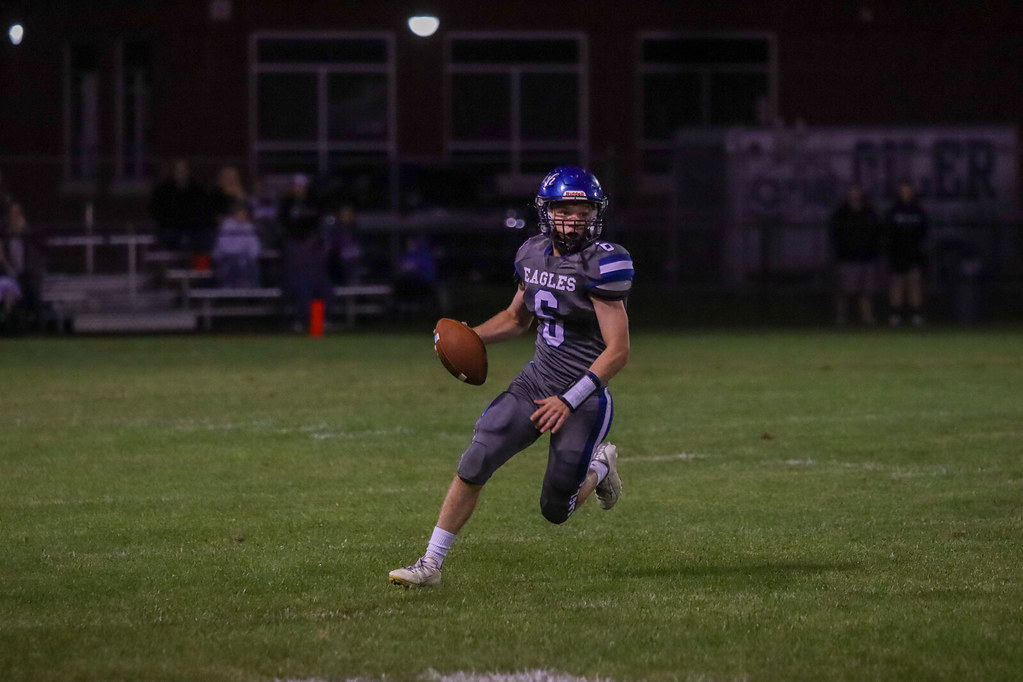 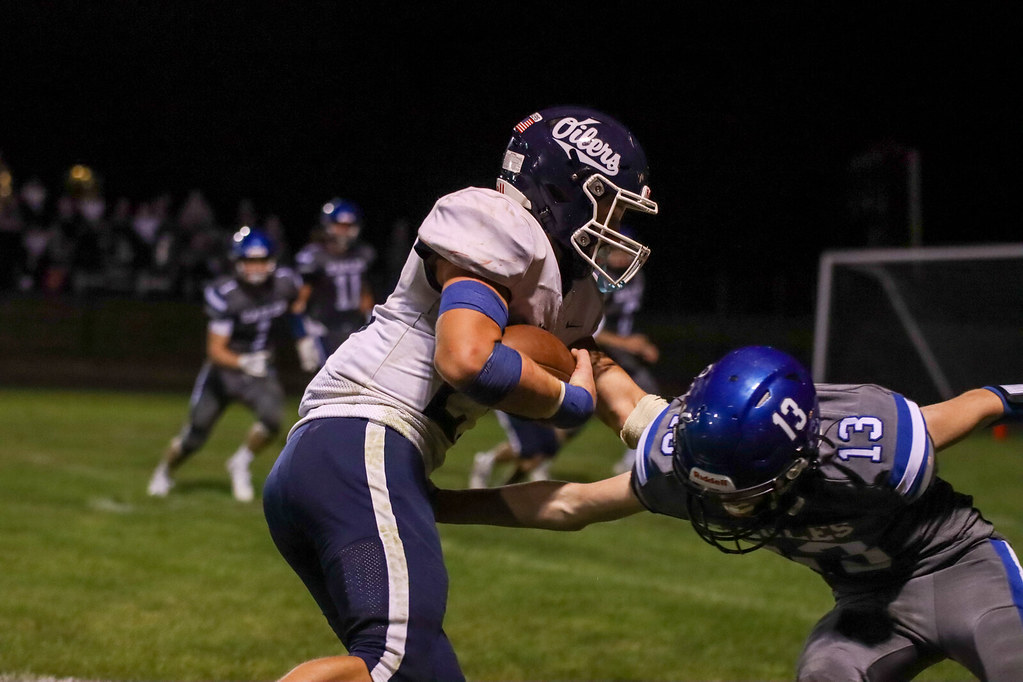 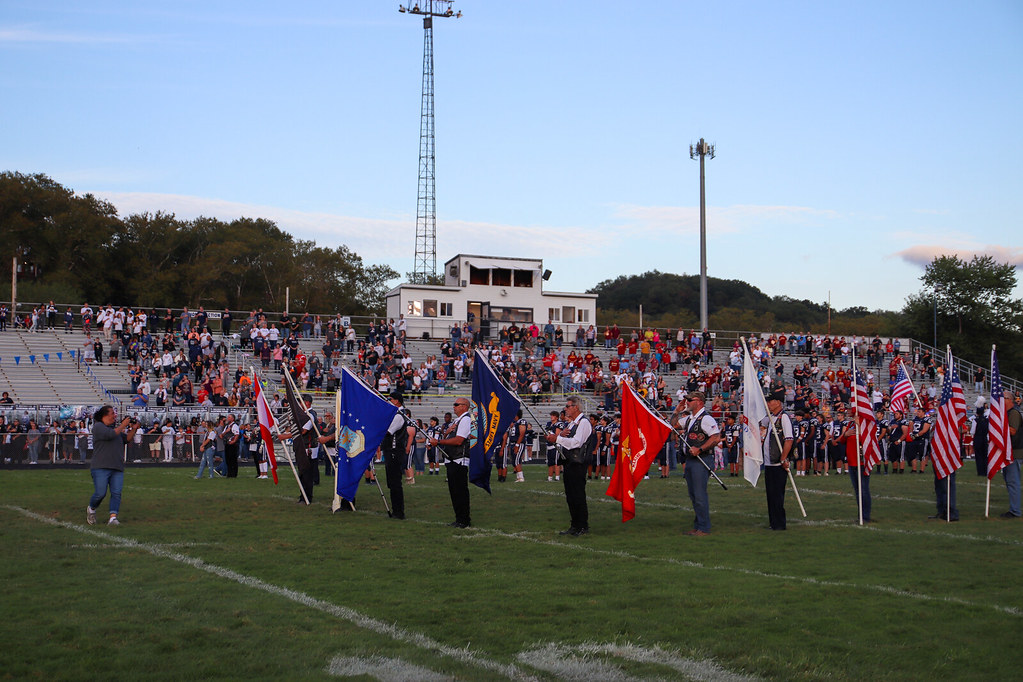 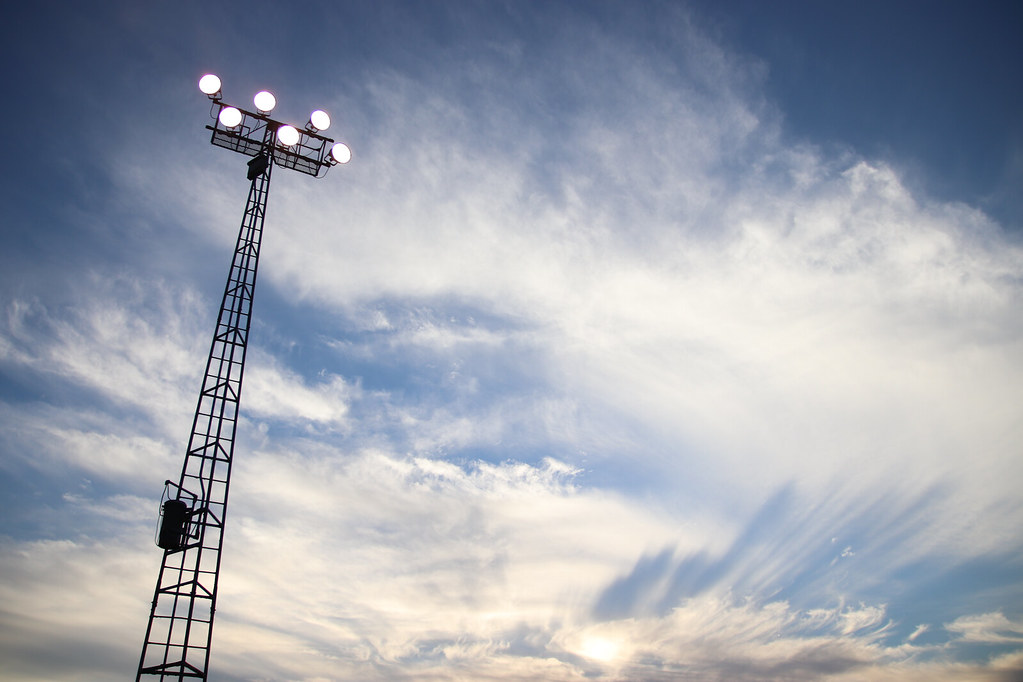 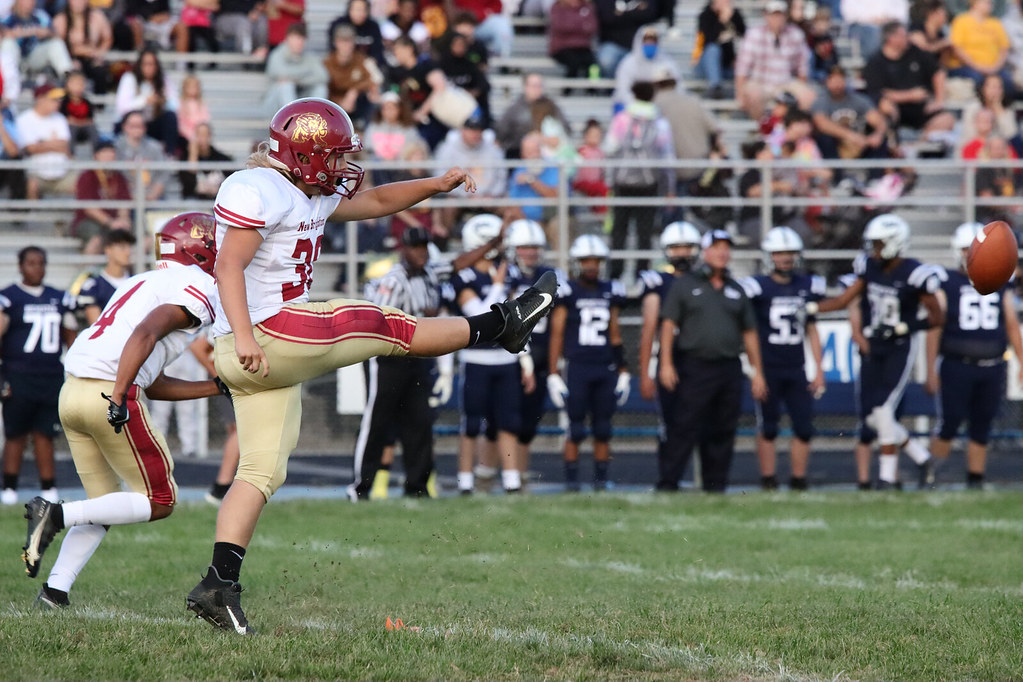 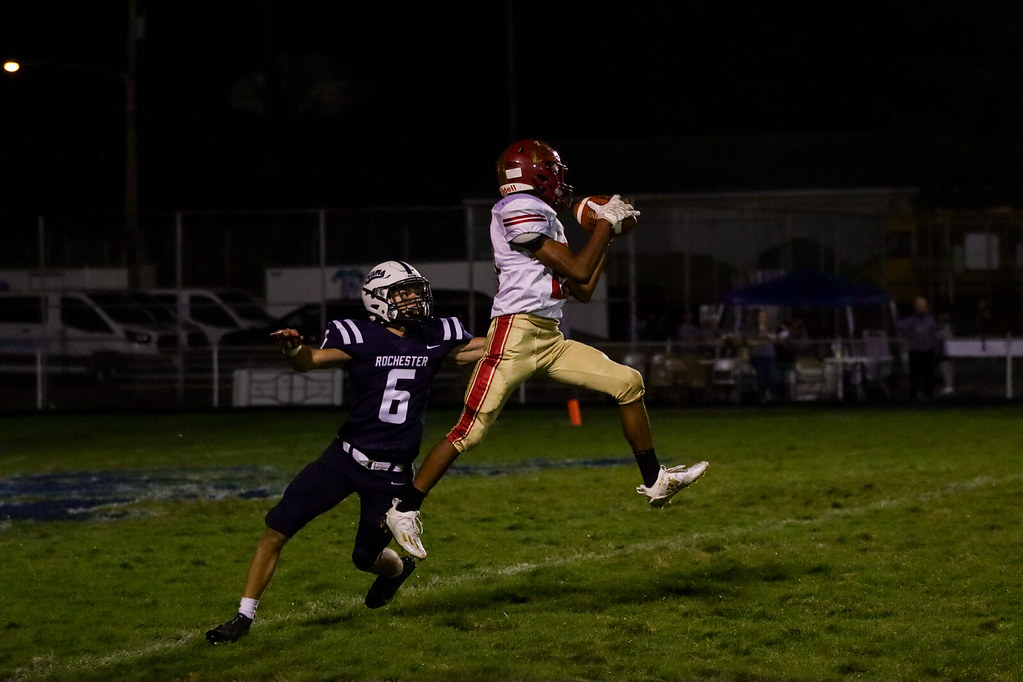 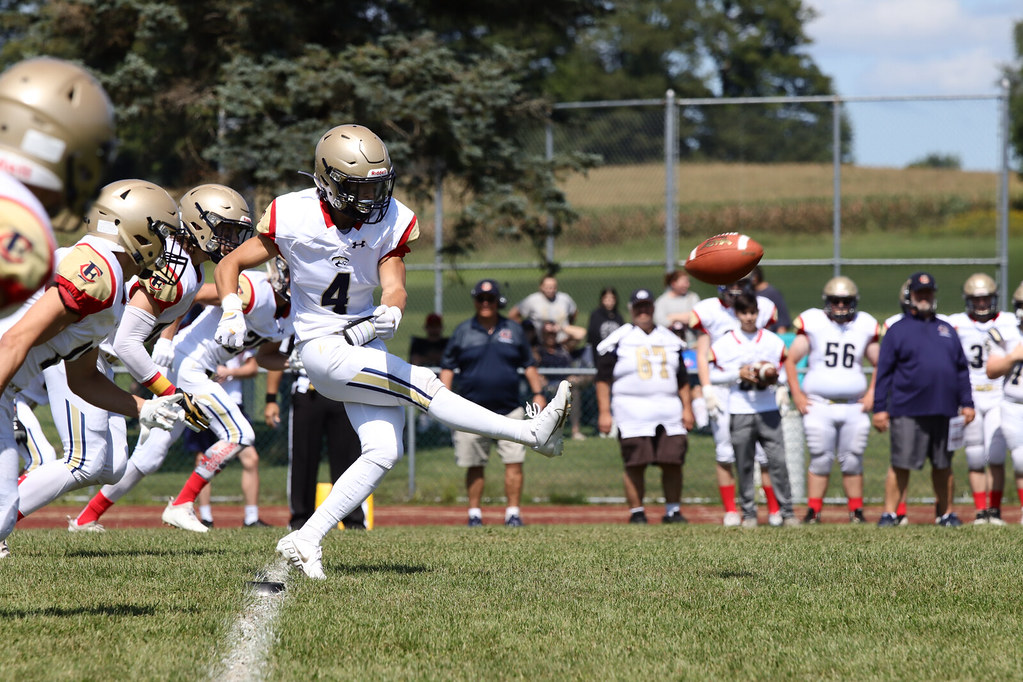 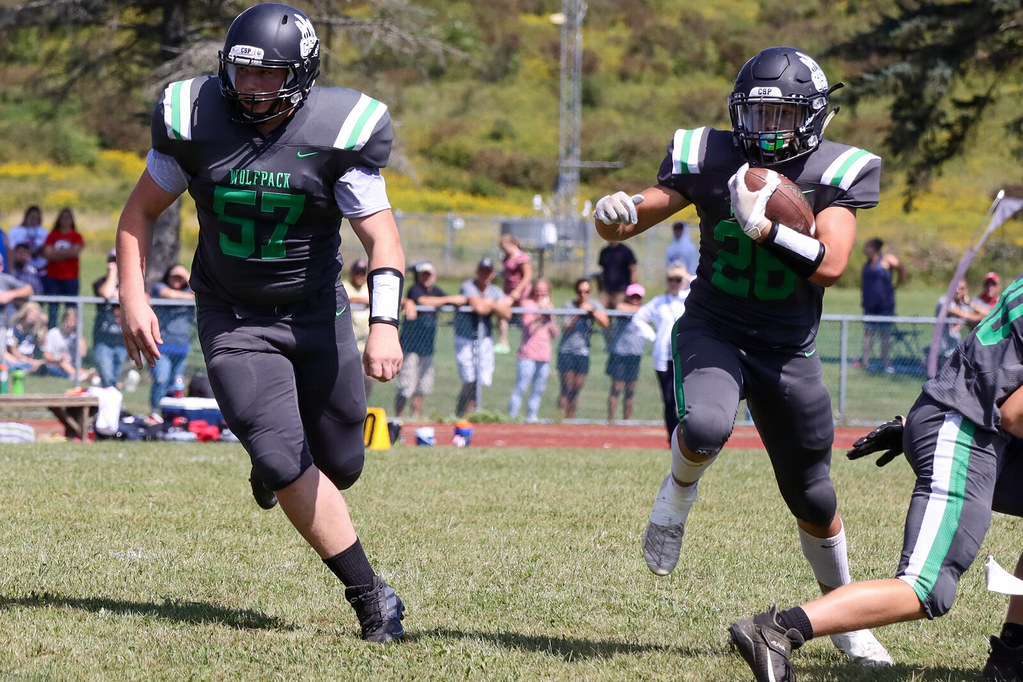 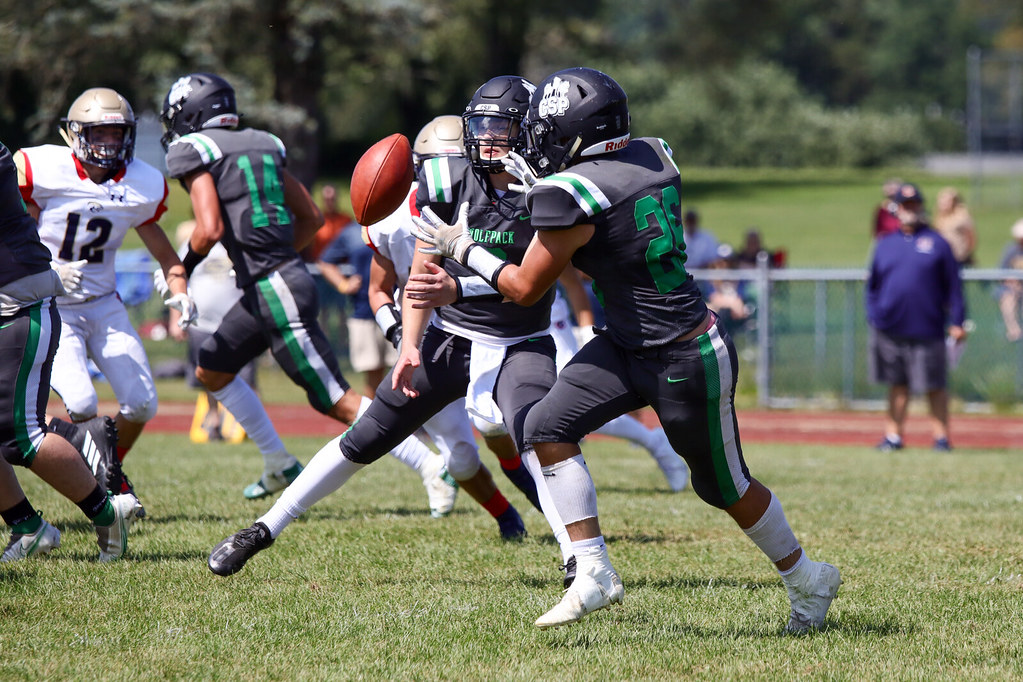 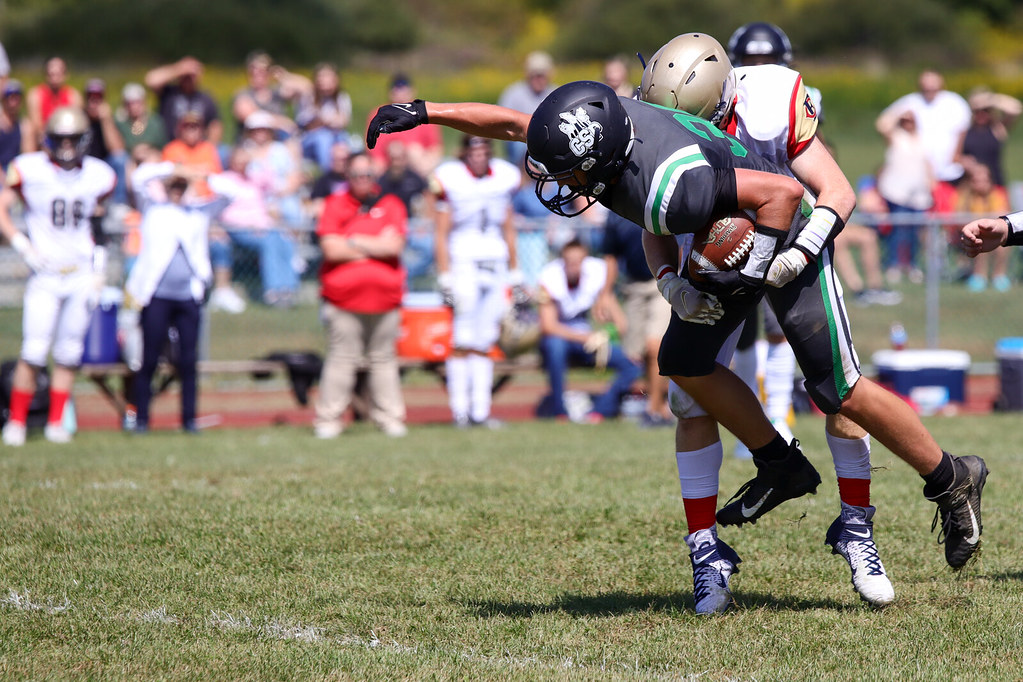 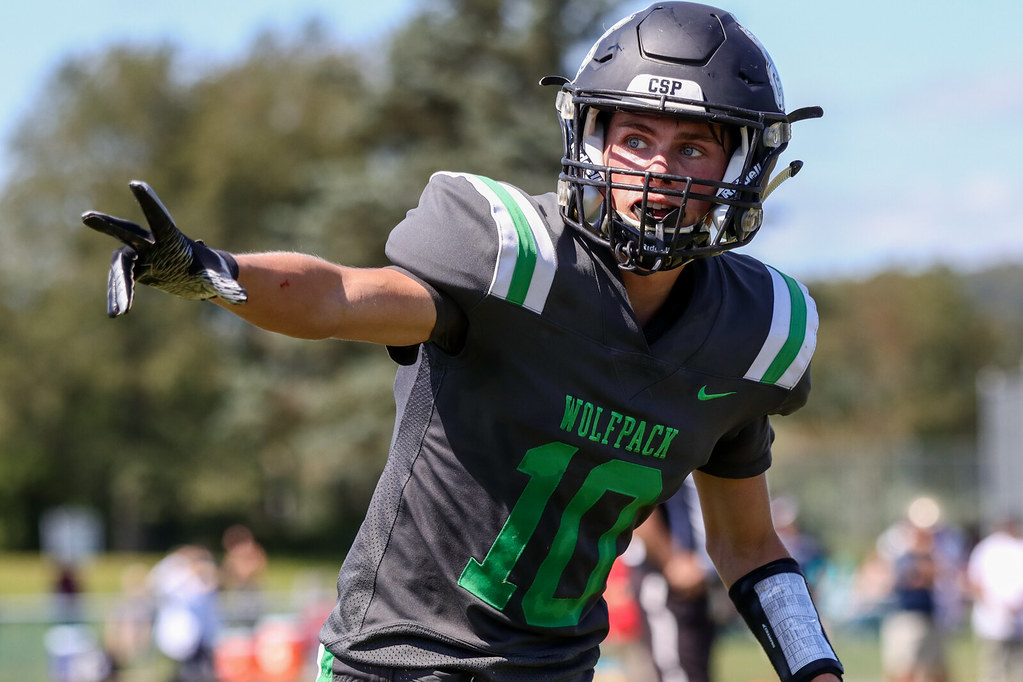 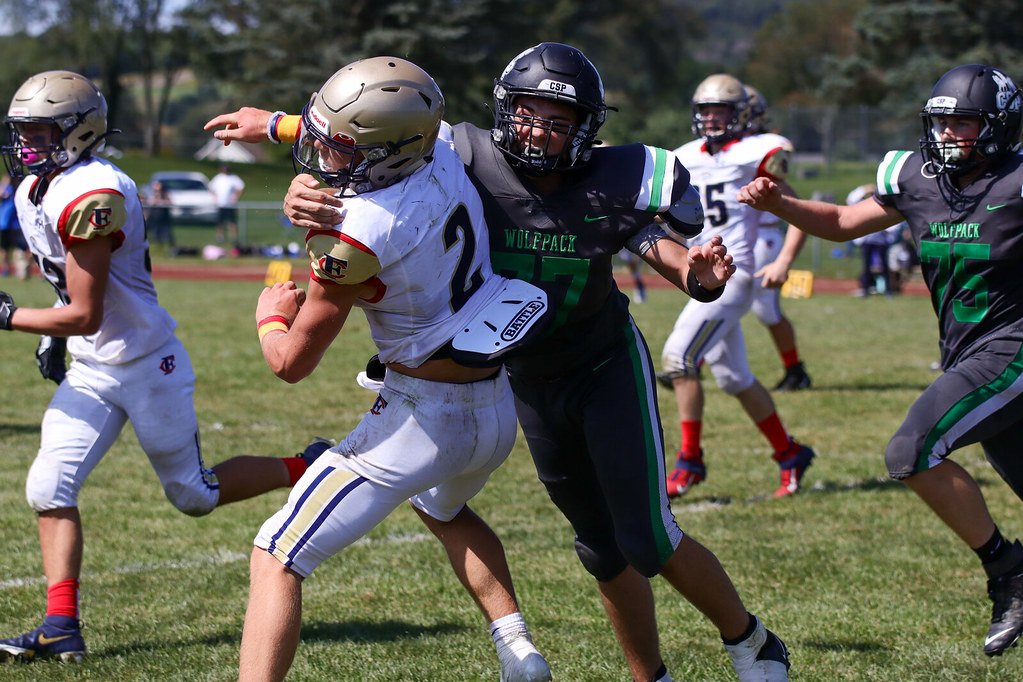 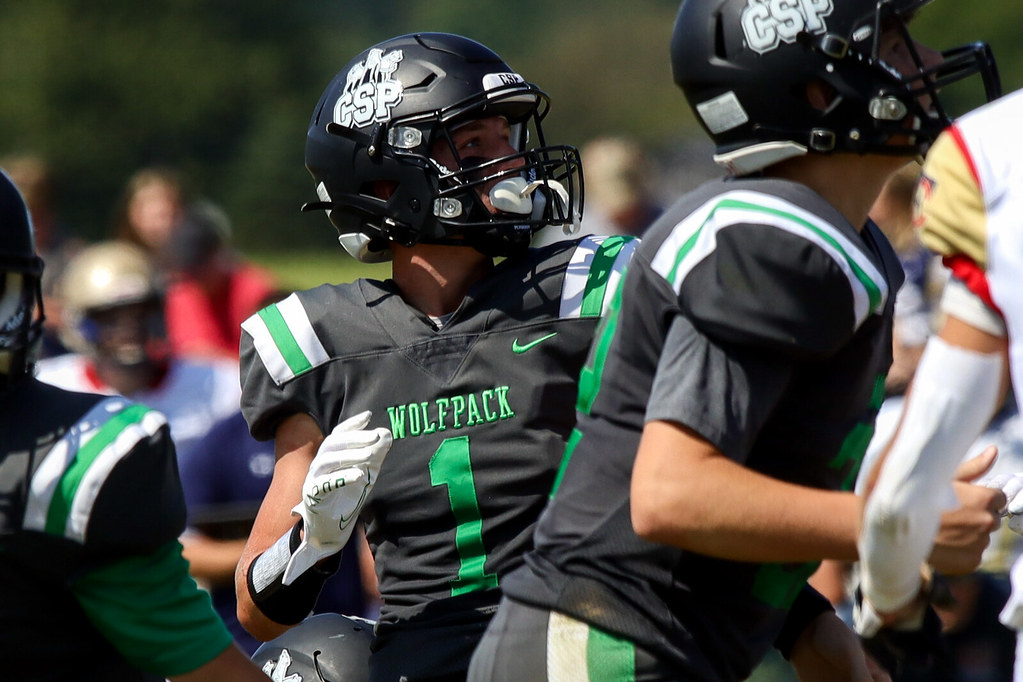 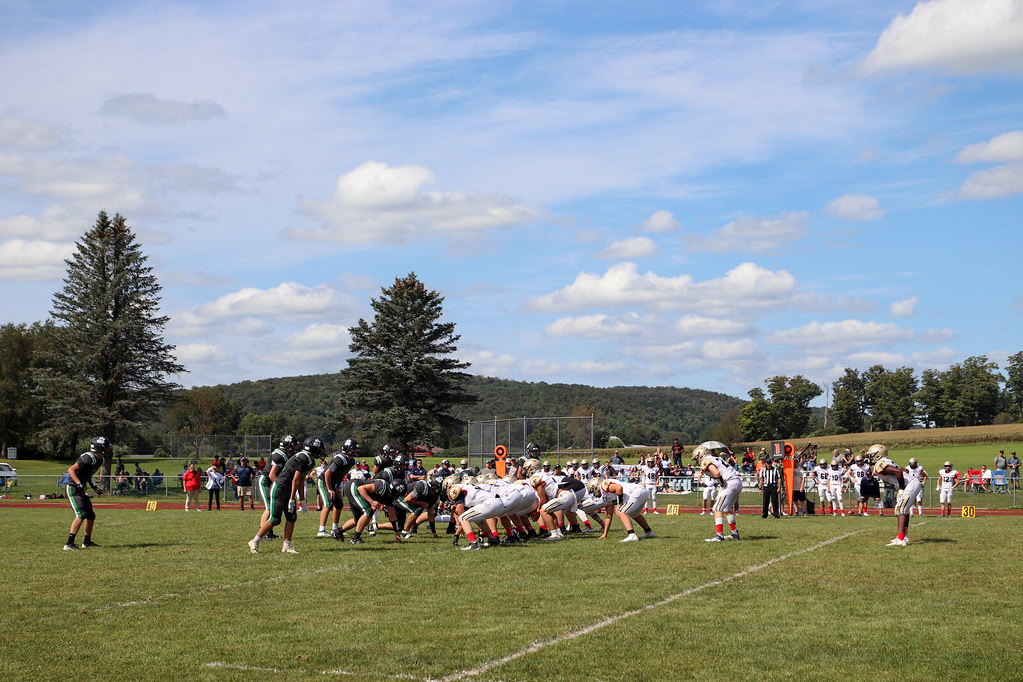 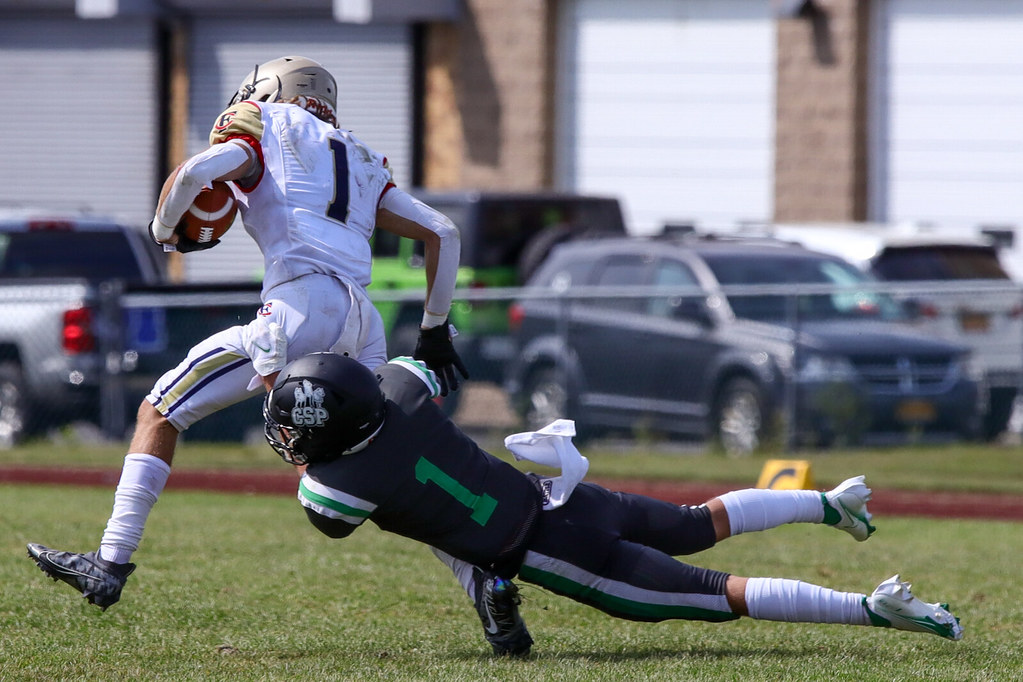 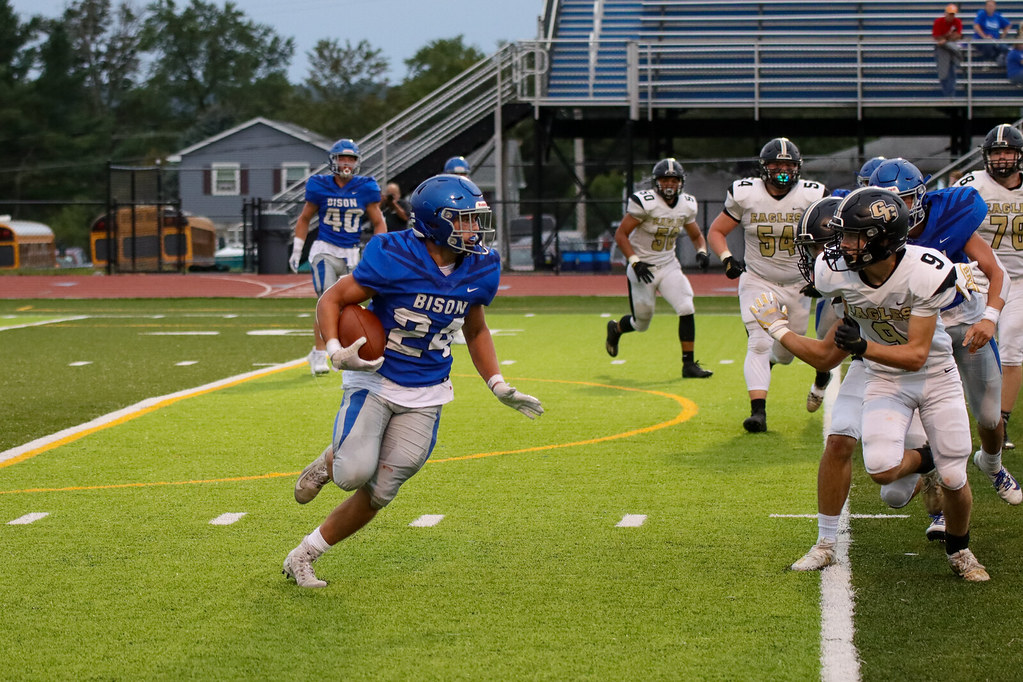 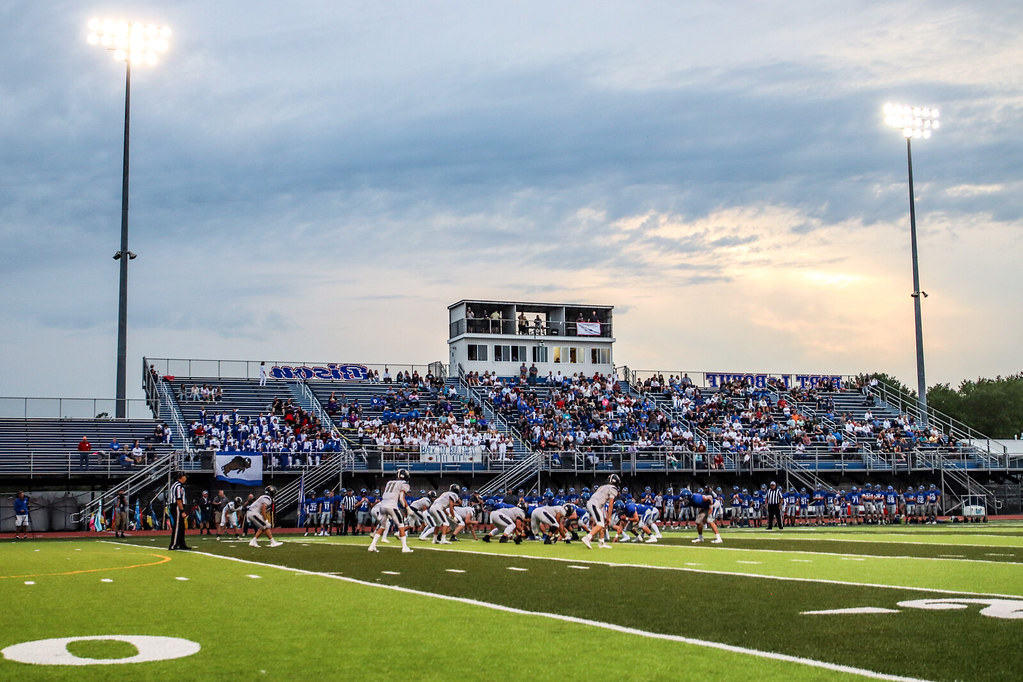 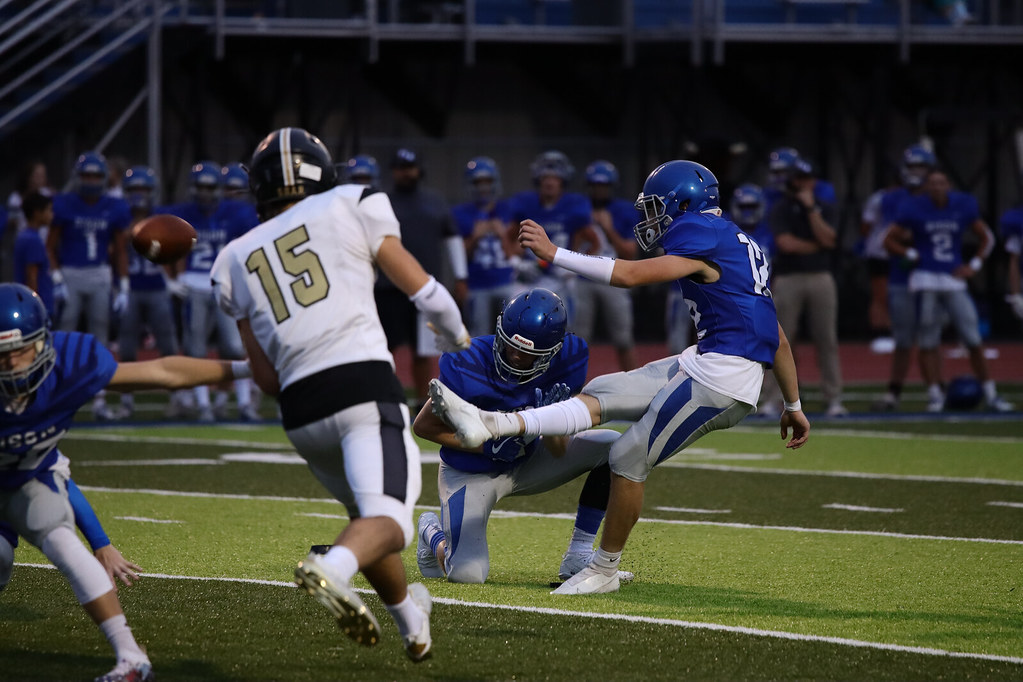 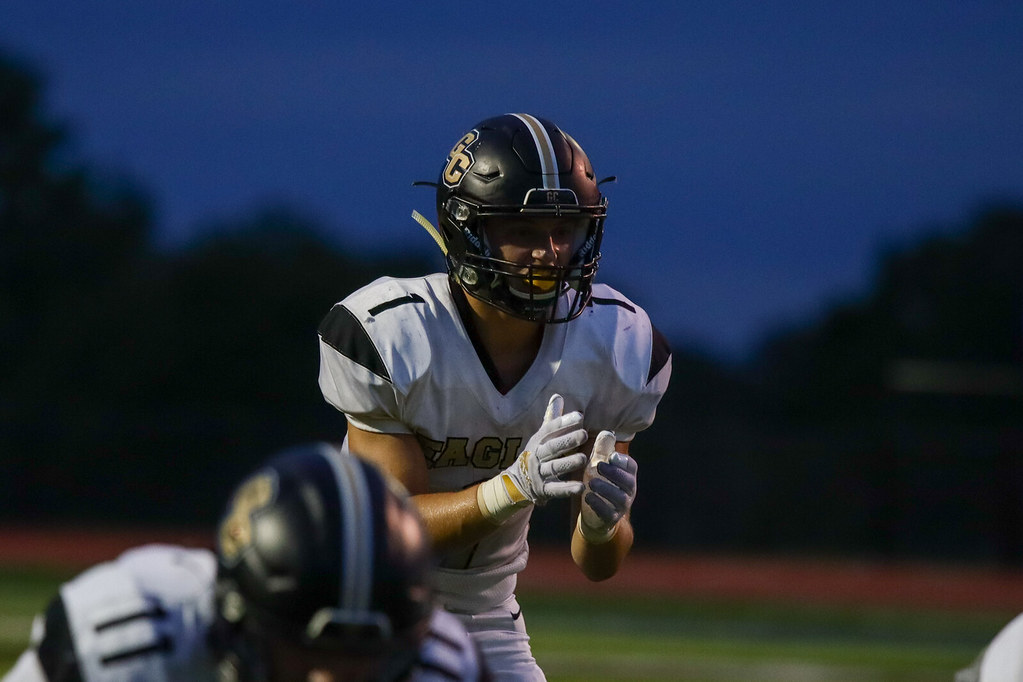 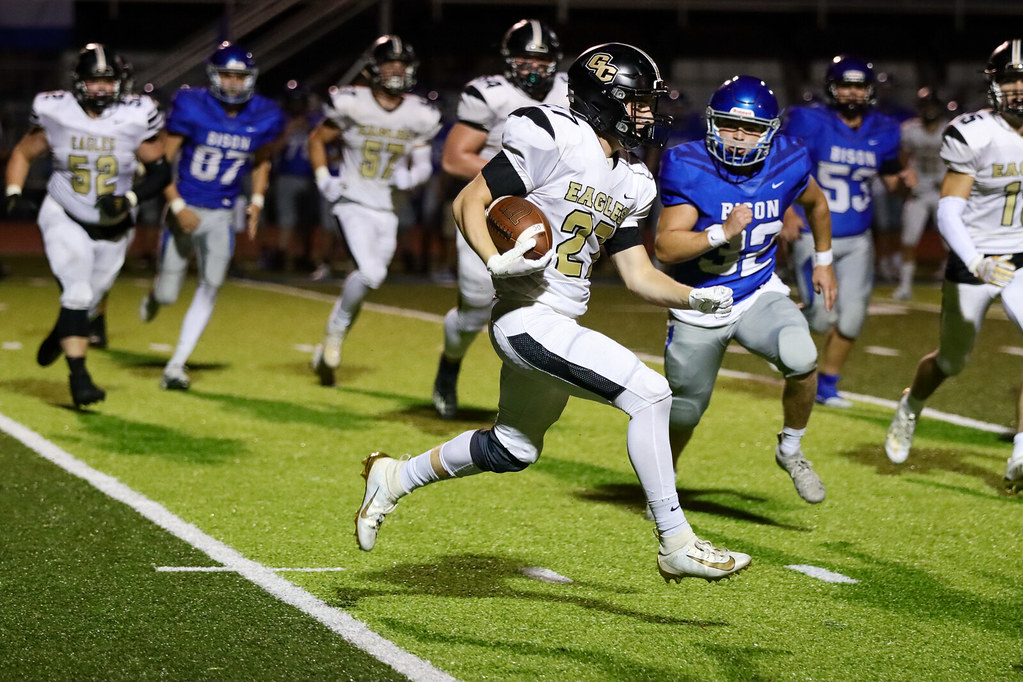 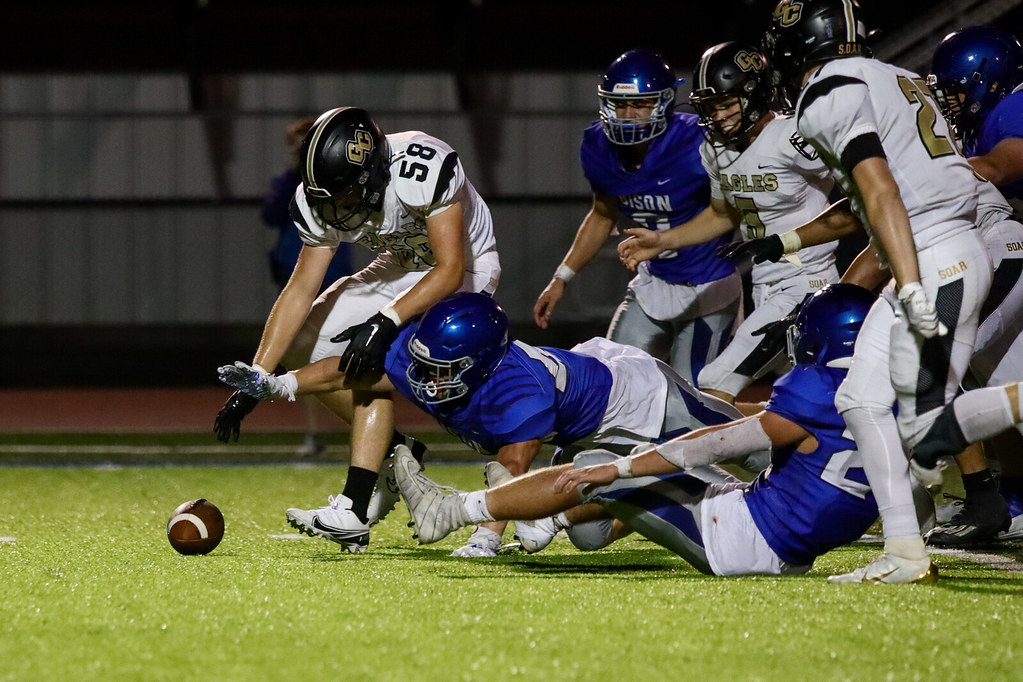 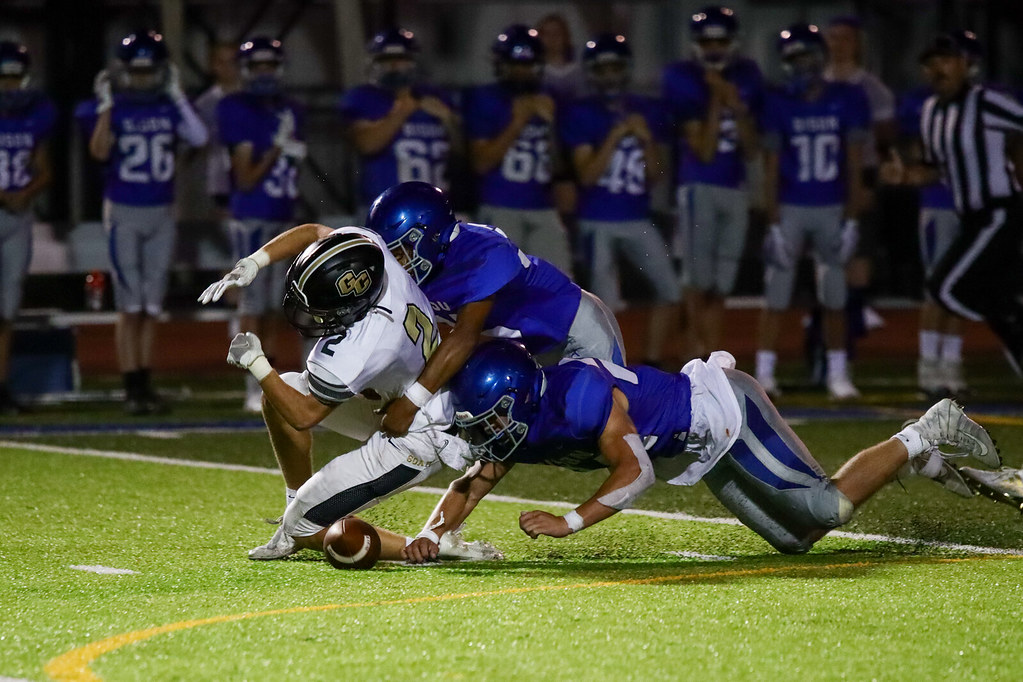 Next week will be the first trip to Indiana since the pandemic. The four-game CIC Day at Ball State will be Saturday. Where, on September 11th, the Central Indiana Conference hosts their entire league slate at Ball State’s Scheumann Stadium in Muncie. On Friday will be a return to Delta, where the last time I was at the CIC Day, ,we stopped in on Friday night. They’re hosting rival Yorktown in what should be a great game. And Thursday, to kick things off, will be a long drive to Arcanum from home for a rare Thursday night game thanks to Dayton area television covering the Arcanum-Ansonia Western Ohio Athletic Conference game.