Finally back in Pennsylvania for a weekend. However, the schedule didn’t want to cooperate. For the PIAA Semifinals, only a couple of Saturday games. And nowhere was that able to be worked into a doubleheader.

I had wanted to head to New York for the state championships. It had been a while since I had been to the Carrier Dome for games. However, my media request was on the basis that there’d be a handful of Section 6 teams making the state finals. That did not happen. Randolph, Jamestown, and even Maritime/Health Sciences failed to advance to the finals.

So, with the prospect of that much travel, expenses, for only one Section 6 school (Bennett), I opted to just stick with Pennsylvania. Until the schedule came out without enough Saturday games. But, I was in for the photographer for the Super Six in Wheeling, West Virginia.

But, I was going to cover a PA game on Friday night.

This was a strange game. First, it was a state semifinal. But it was also a home game for Central Valley. The PIAA rules allow a team playing in their first state playoff game (Central Valley had just finished District 7 playoffs the week prior) to host. It’s a rule that I don’t personally like. And the way this game progressed, gave me more disdain for it. Should be a neutral site.

This was my first time seeing Martinsburg Central. Now, technically, they are just ‘Central’, but I’m not playing that guessing game which Central I’m talking about. They’re in Martinsburg.

Game started great for the visitors. Early turnover turns into a touchdown. A 7-0 lead after 1. But then Central Valley started to dominate. Three straight touchdowns to take a comfortable halftime lead, 21-7. But it wasn’t going to be easy. The Central Red Dragons get a pick six to make it 21-13. Close, right? But then Central was moving toward another score when disaster struck. A fumble returned 74 yards by Central Valley makes it 28-13. Central strikes back again, despite their miscues, and scores to make it 28-21 on the first play of the fourth quarter. Another possession goes to the goal line. Stopped on 4th down at the 2 yard line. And then disaster. With 2:10 left in the game, Central Valley’s Langdon Alexander goes 98 yards for a TD. Essentially running away with this one, 35-21.

After the game, talked with AJ for a bit. Then headed home. Not traveling and needing a hotel room was a nice change of pace.

The next morning, it was off to Wheeling. Went the short route. Cutting through Youngstown to I-680 and the new last exit before the toll to get to North Lima. Over to Route 11 and down to East Liverpool. Turned out that the exit to Route 7 was closed, so had to follow 30 around the southside of town to the next exit and double back.

Followed Route 7 south through Steubenville to Bridgeport. Stopped for a drink at McDonald’s, and then made my way onto the island.

I took my usual route to the stadium, before finding out that the media lot is on the east side of the stadium. With the streets around the field all operating one-way. So, I followed around the neighborhood back to the stadium. And I was told media was on the south end. So, I get there, and told that’s not the lot, it’s the lot a few feet behind me. But, I can’t just back up because everything is one-way. So, had to loop around again.

And when I did get to the media lot, had a run in with a questionably legal interaction with a Wheeling police officer. After dealing with him, I was finally in the media lot after a slight delay.

From there, you have to walk back to the entrance at the 50 to get your credential. Got it, and got in. Been to Wheeling Island Stadium many times in the past, but this was the first time I had ever been on the home side of the stadium. Which is somewhat strange. I just always parked on the west side and entered the west sideline. It was just always easier. And the one time I was there for a Steubenville game, I just sat on the visitor side anyways.

This afternoon I'm on Wheeling Island for two West Virginia state championship games. First up is the 3A title between the Huntington Highlanders and the Martinsburg Bulldogs. #84 @PaFootballNews #BeyondTheKeystone pic.twitter.com/pmcrA4cfZM

This was an interesting, but predictable game. Martinsburg was the favorite to most, and they played like it. Huntington hung on for a while. 7-7 after 1, thanks to a last minutes TD to tie it. But then, late in the first half, the game exploded.

It was 14-7, Martinsburg, with 3 minutes left in the half. It was 41-14 at the half. Five touchdowns in 3 minutes. A 4 yard run, 32 yard pass (after recovering the fumbled kickoff), 29 yard pass, and a 10 yard pass after an interception return to the 10. The only blemish was a quick score by Huntington on a 38 yard TD pass to make it 26-14. But staring 41-14 down in the lockerroom didn’t help. Huntington arranged a single TD to start the third, but Martinsburg obliterated them. Three more touchdowns in the first ten minutes of the third made it 62-21. There would be no more scoring.

With the first game starting at noon, and the quick finish with a running clock, there was plenty of time before the 7pm kickoff for the 1A game.

Left the island and drove up to the top of the Highlands east of Wheeling. Ate lunch at Quaker Steak & Lube. Watched some of the college games on TV before heading back down for the night game.

For this game, I started in the Ritchie County stands shooting down at the field. Then, at halftime, going back to the field for low angle shots. Got a good shot of a facemask. Uncalled, of course. 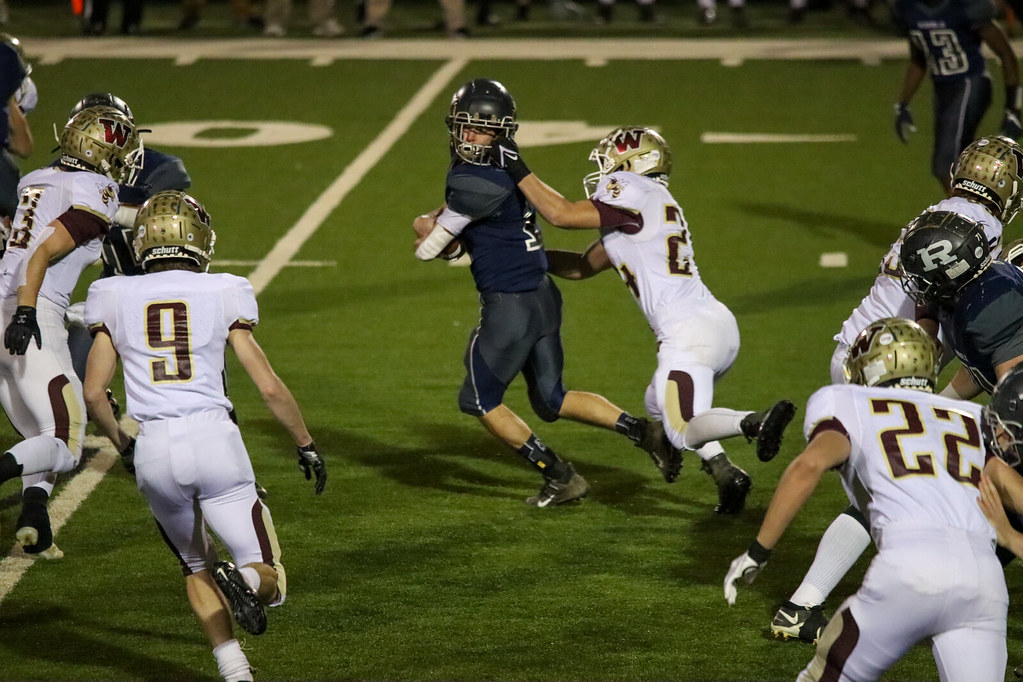 Ritchie County scored on a very long drive. And an 8-0 lead. Williamstown scored as well, but went for 7, to trail 8-7.

Wasn’t a very long drive home. Back the same route I had driven down. Nothing too noteworthy.

This was another simple weekend. No gas. No tickets. No parking. Just $62 total. Of that, $5 was for a souvenir program and $57 for food. Most of that was the wings at Quaker Steak & Lube on Saturday. Total miles for the weekend was only 292. 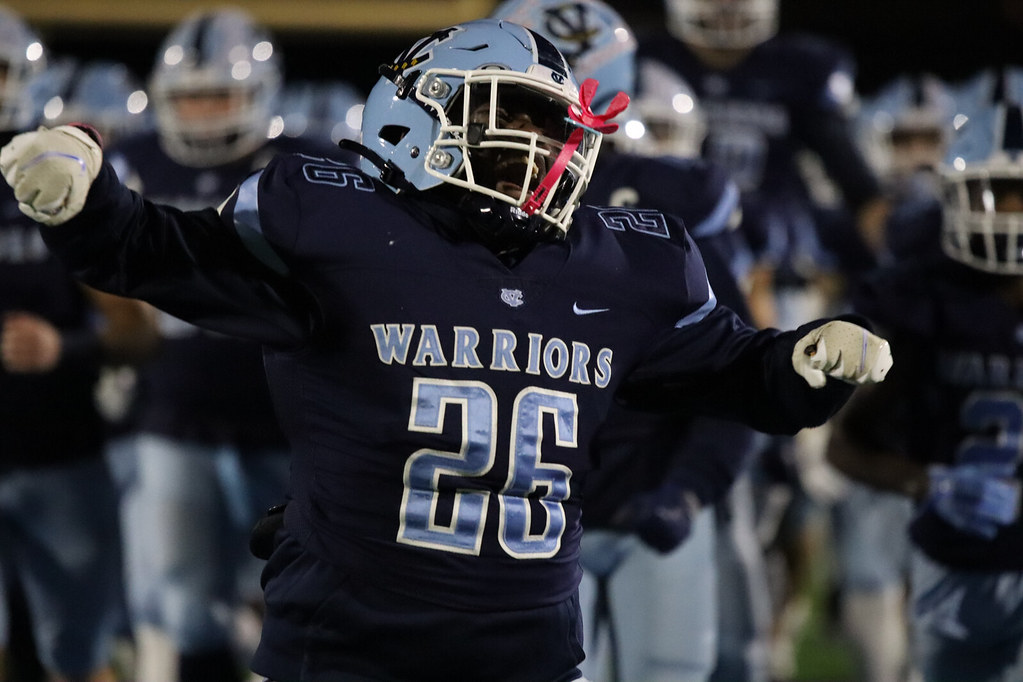 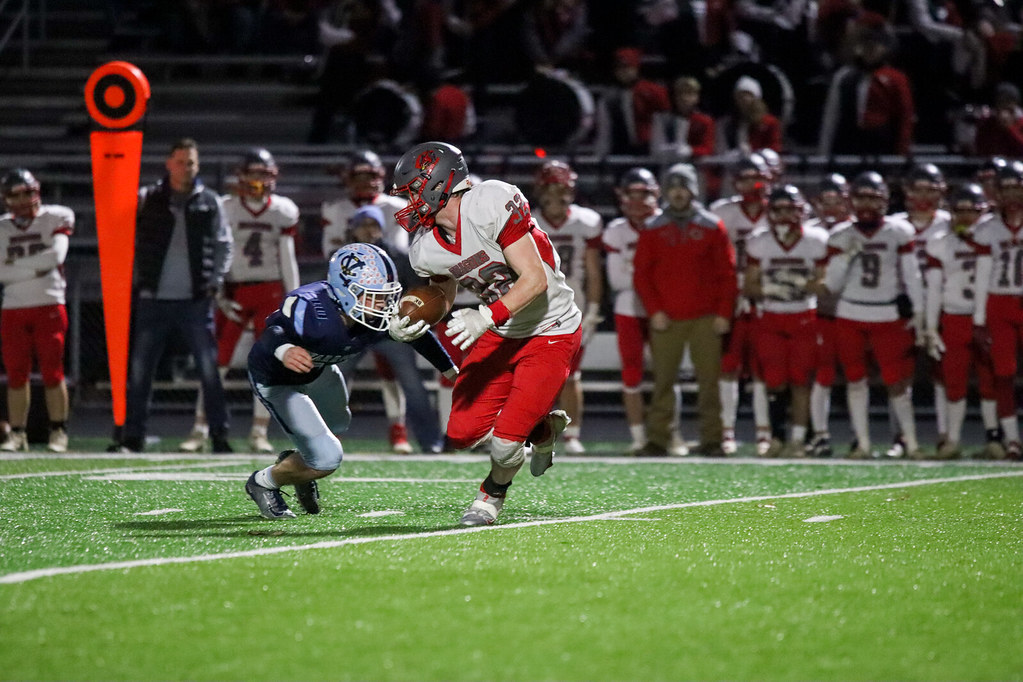 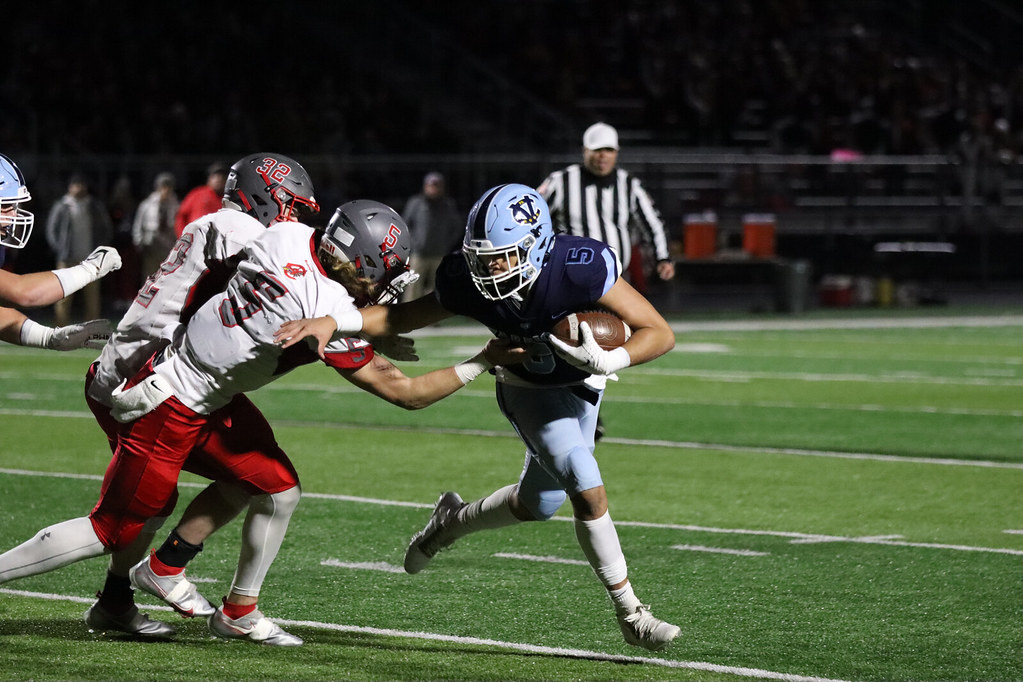 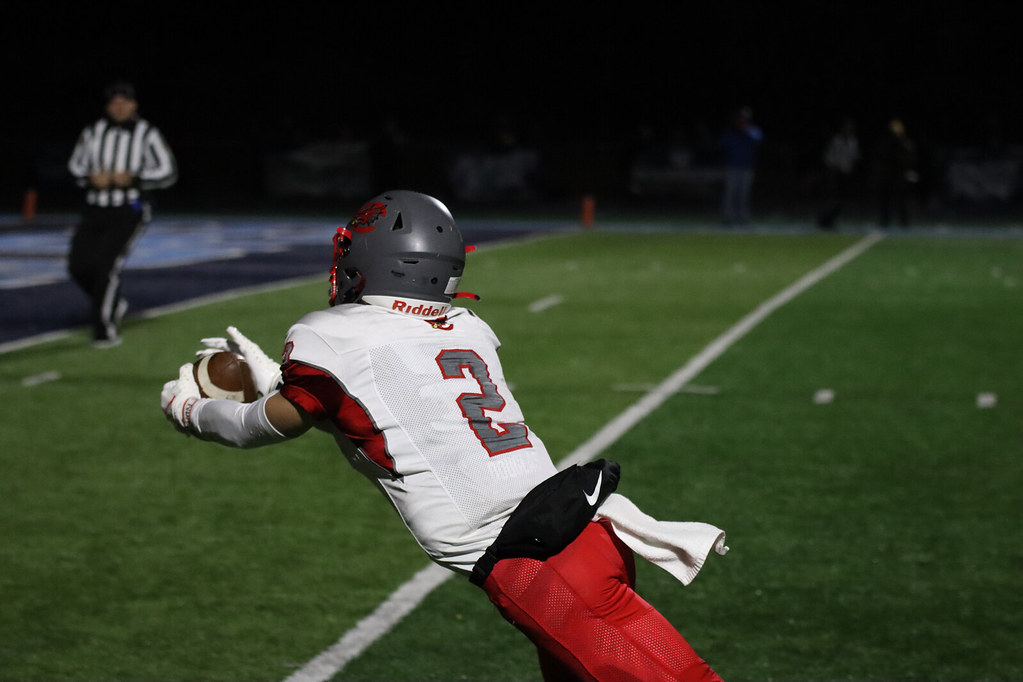 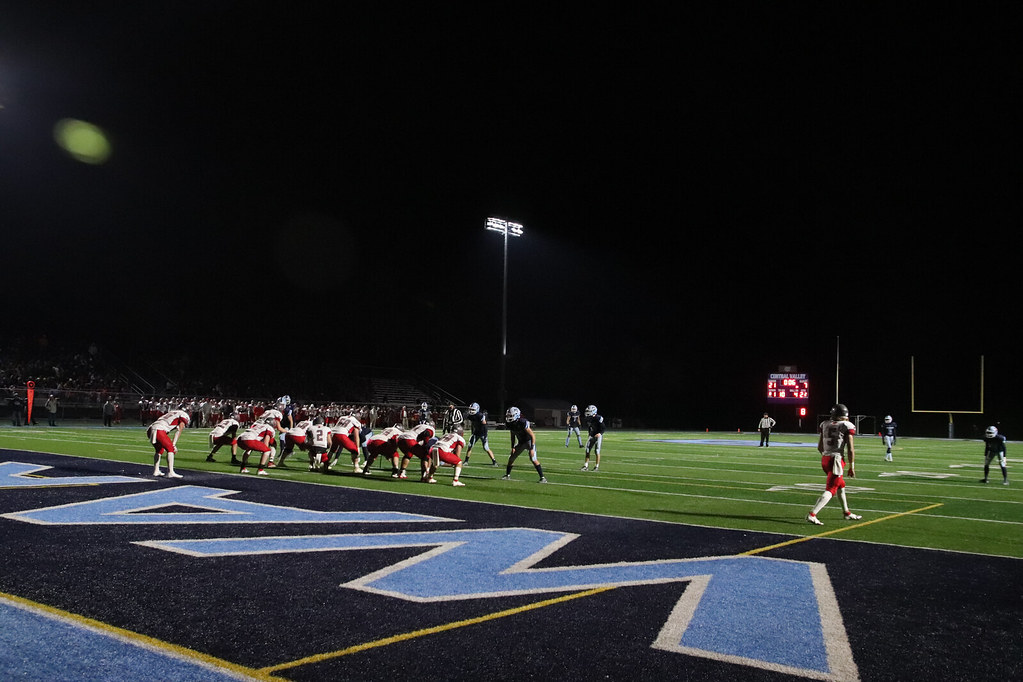 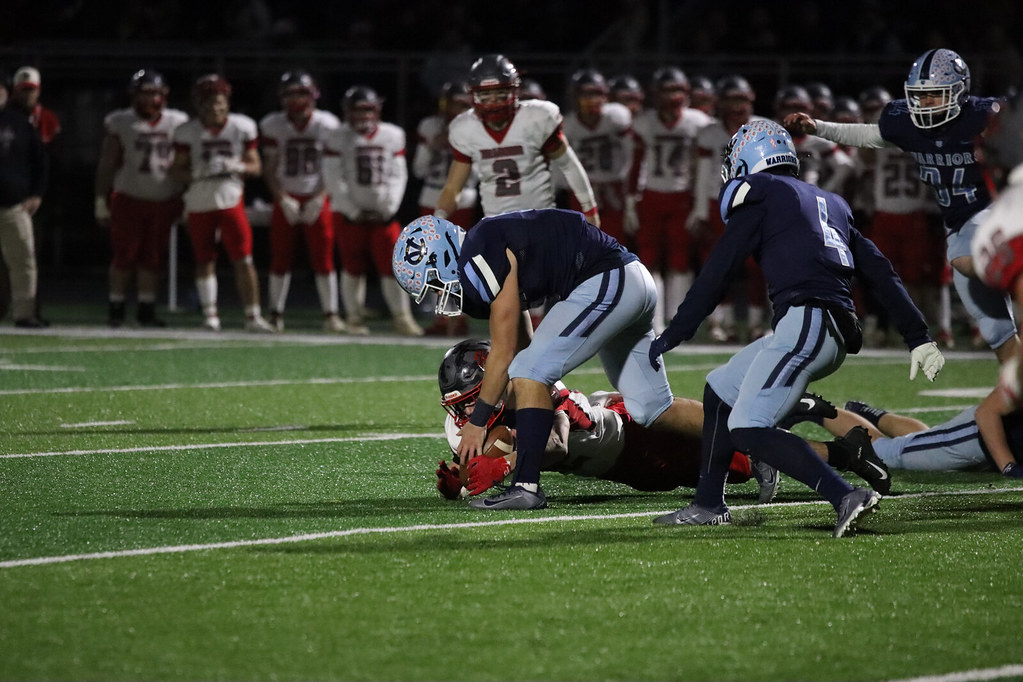 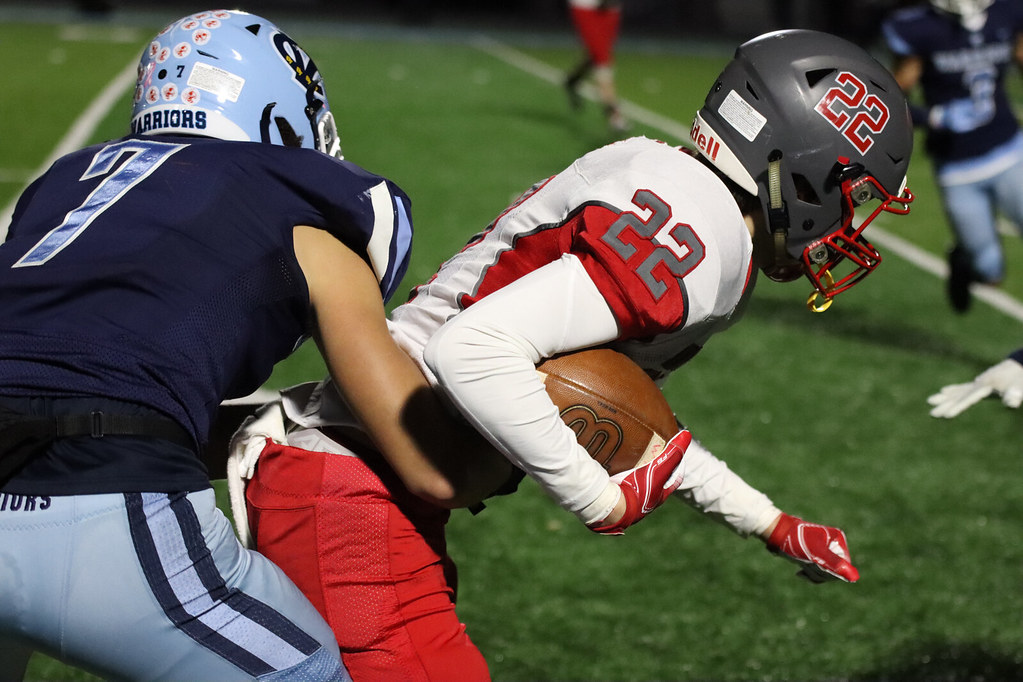 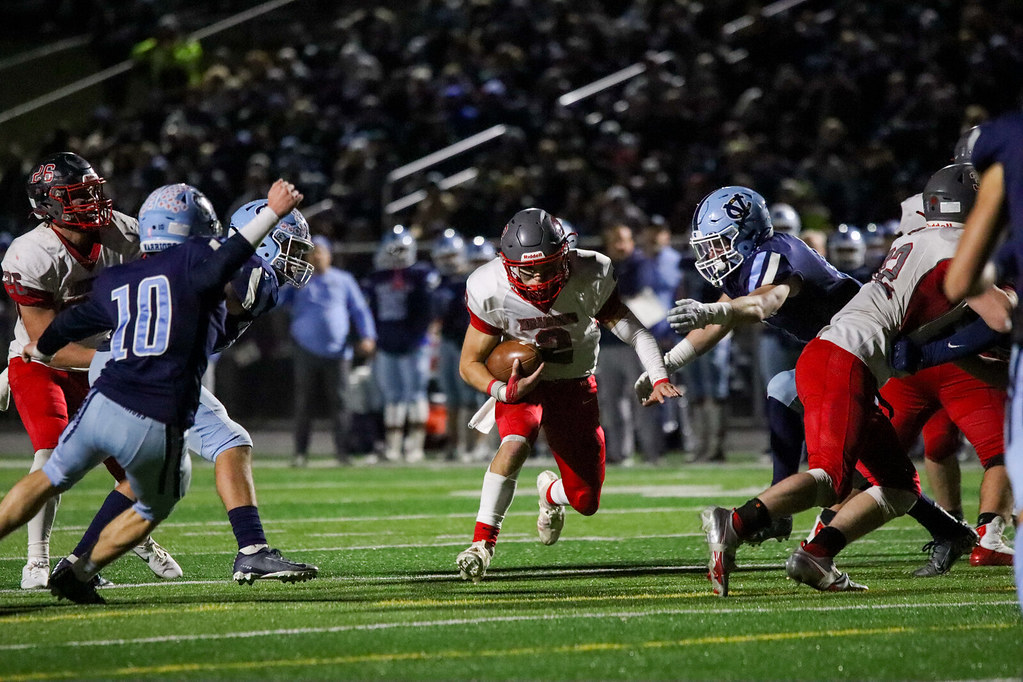 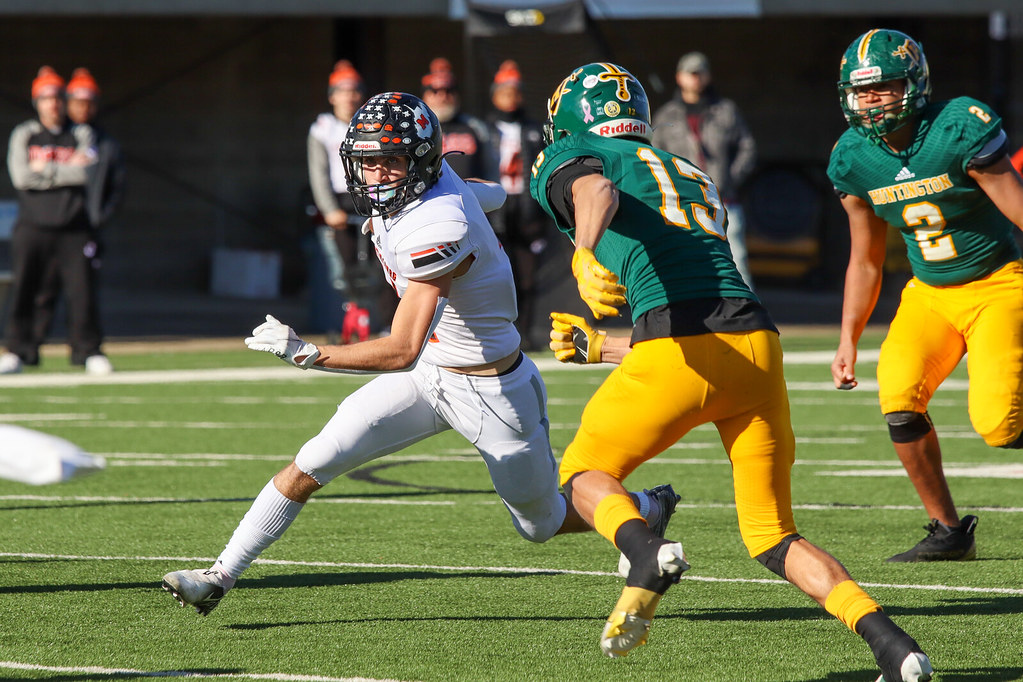 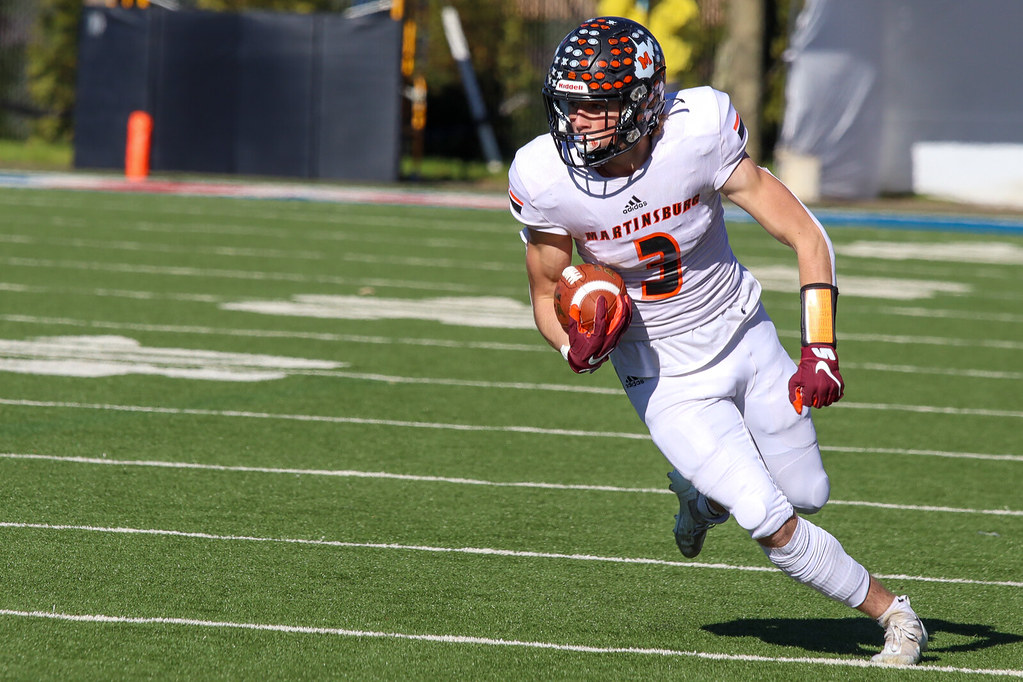 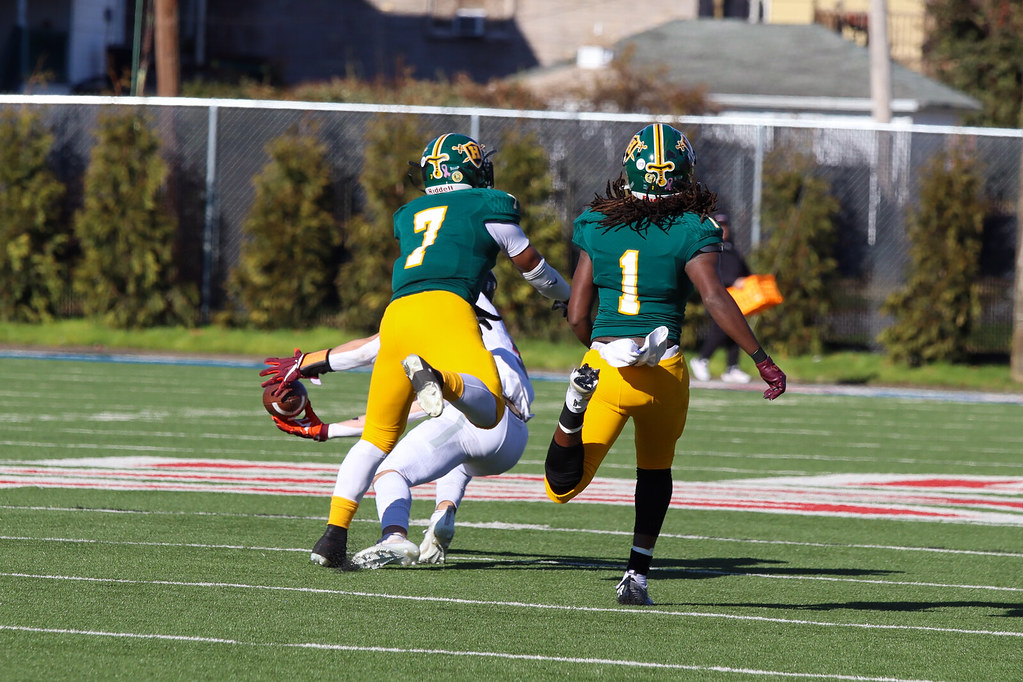 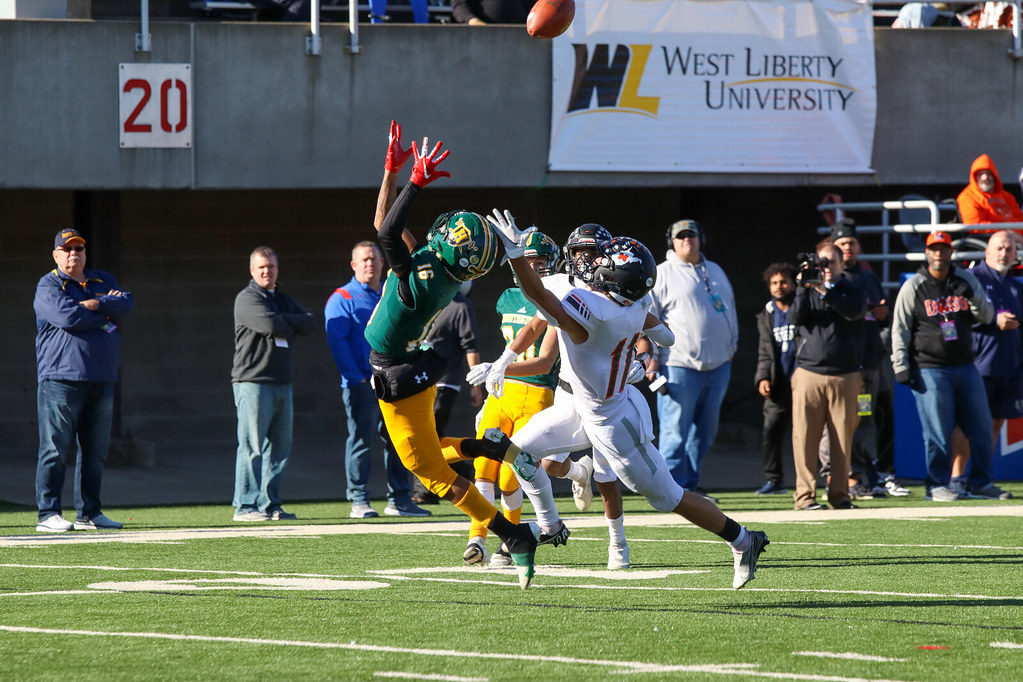 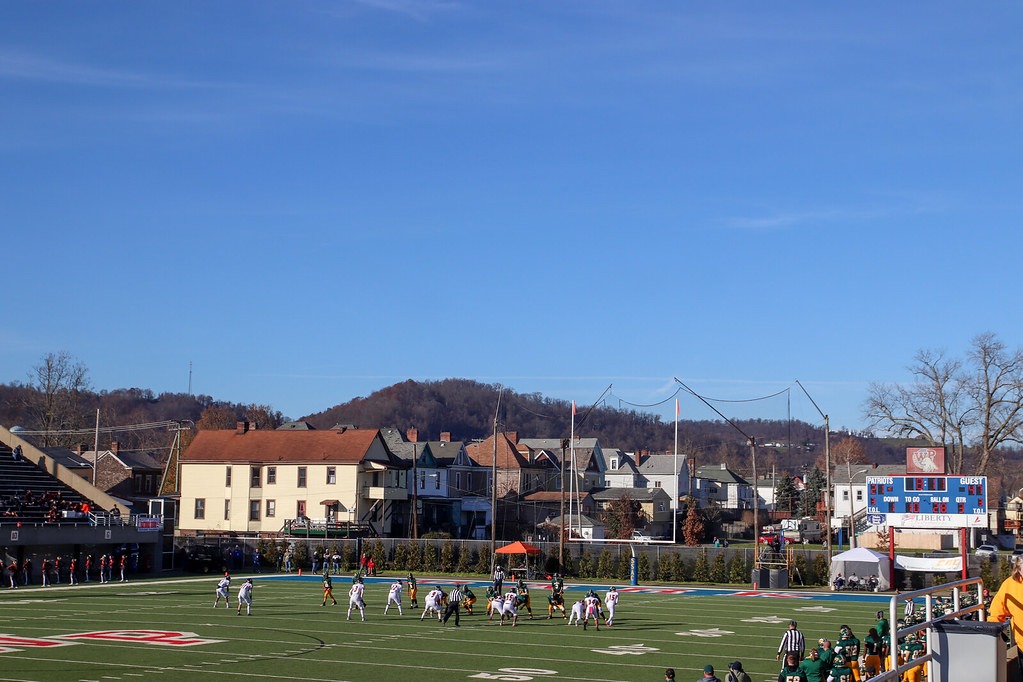 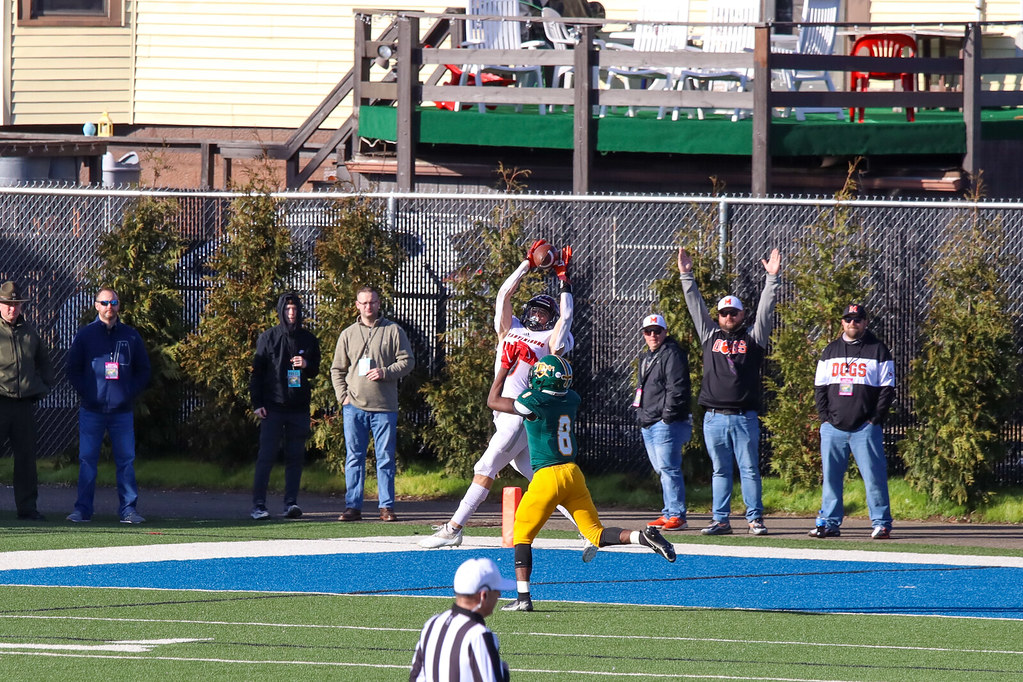 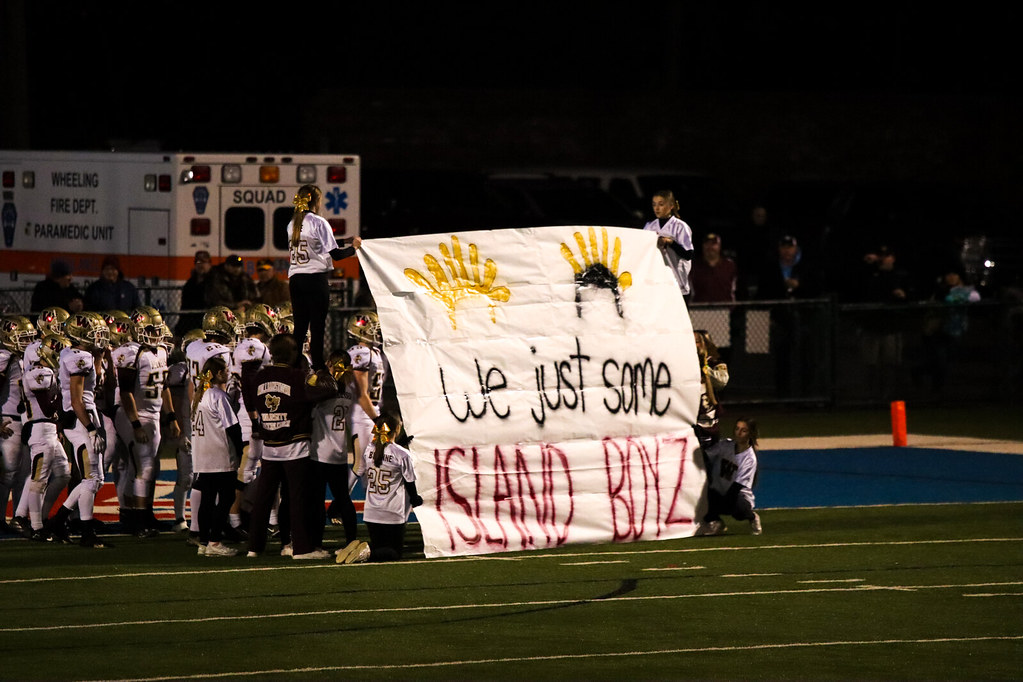 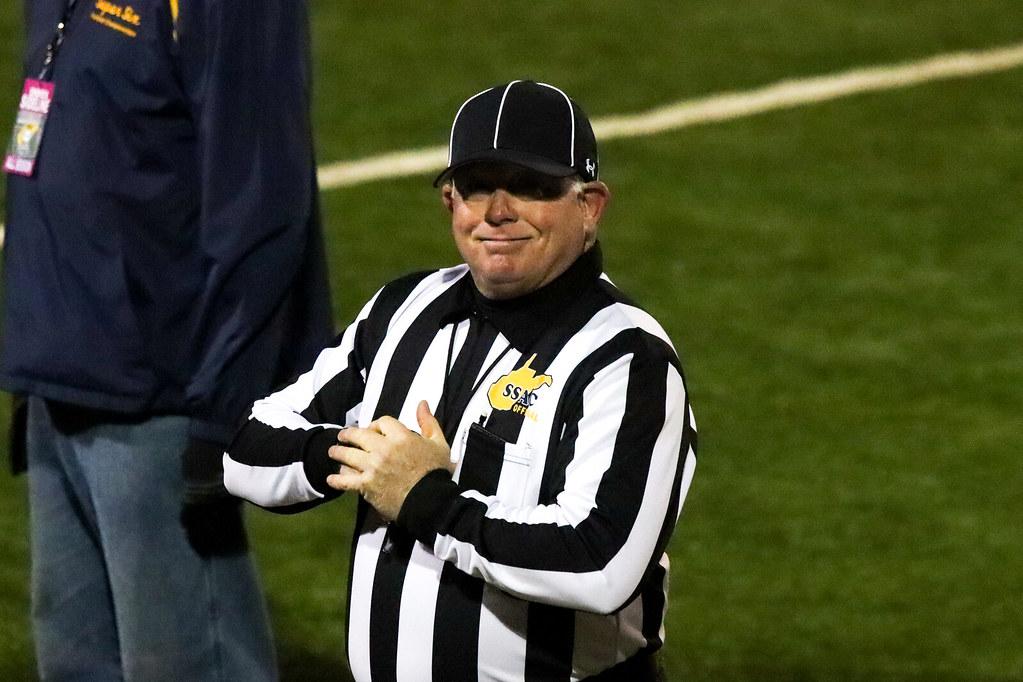 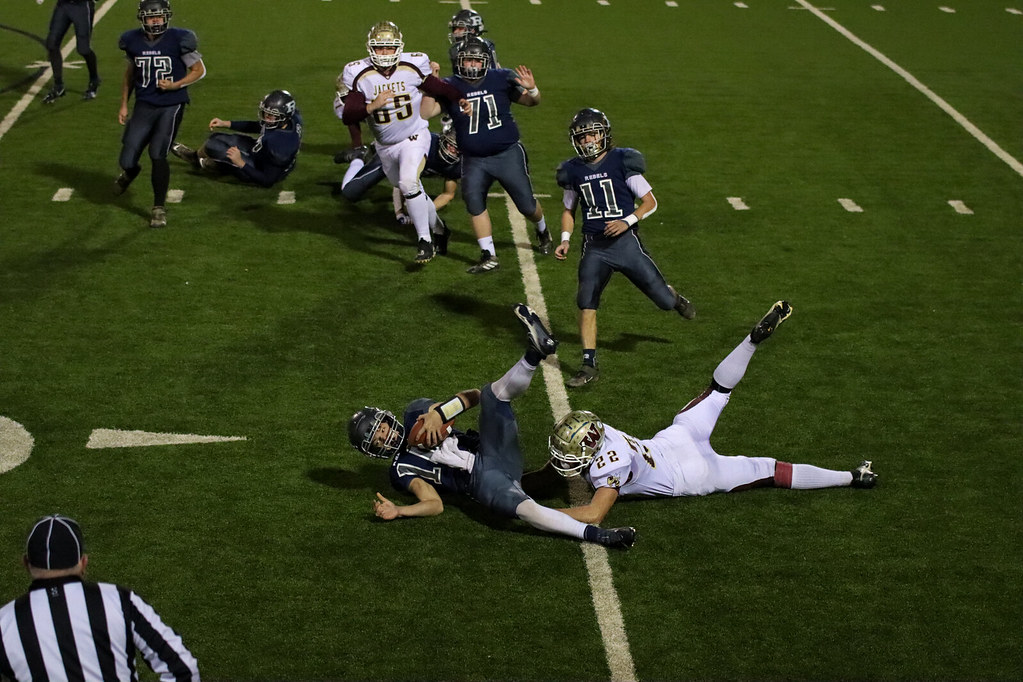 The next weekend is the six PIAA Championships at Hershey.

Of the twelve participating teams, only Serra Catholic have I not seen previously.