Week 7 was planned the moment I found the schedule change. In Indiana, there’s two conferences that regularly will schedule an entire weekend’s worth of games at Ball State’s Scheumann Stadium. The Central Indiana Conference (CIC) and the Tri-Eastern Conference (TEC). I had been to Ball State twice in the past for CIC Days, but never yet had seen any of the TEC schools play, or a TEC Day at the stadium. So, when I saw that the TEC would have TEC Day (including an extra interconference game on Friday night), I had to make a return to Muncie.

With Delta playing at home, which would be my third time at Delta, I had the bulk of my weekend planned. But, Thursday was once again a squeeze. My daughter had a function Thursday afternoon and the only chance at a full game would be a quick drive west to Akron. East and Buchtel had a game at Ellet on Thursday night. It would’ve been my first time seeing East play.

But, on Thursday afternoon, I got confirmation that the game was postponed to Saturday. The only two other games anywhere was a Pittsburgh City League game, or the game in Parma. Which, I had already made plans to head to Akron, and though I’d miss most of the first quarter, headed up to Parma anyways and see if I could get in. If not, I’d just watch from the stands as a fan.

I got to the parking lot about 8 minutes into the game, and into the stadium about two minutes of game time later. Holy Name had a two touchdown lead at this point. Just scoring before I got there. Getting situated, I didn’t send any other tweets, so started in the second quarter while on the field. I had prepped for the Akron game, so starting the night in Parma was a bit of a surprise and had to find the rosters of the two teams playing.

After going up 35-0 briefly to start the running clock, Holy Name relaxed and let Normandy score twice. Ensuring the running clock would be put to bed. The Invaders would get a turnover and the thoughts of trimming the three TD deficit had crossed my mind, but a loss of possession had essentially finalized this game. Holy Name would win, 35-14.

After the game, I cut down through Cuyahoga Valley National Park and stopped in Akron at Swenson’s. I hadn’t been to one in a while, even with one opening near Boardman.

And a late night dinner at one of the original Swensons in Akron. Where I should've been at a game tonight. #roadtrippin #dinner @SwensonsDriveIn pic.twitter.com/xAApcUYGrV

Swensons is a traditional carhop. There are no menu boards here. Just a guy with a tablet walks up to your car to take your order. The Galley Boy is one of the best burgers you’ll find. I’ll put it up against almost any other burger. The dual sauces is what makes it special.

I got home after midnight and finished up the photos. Got myself situated for my trip to Indiana. And went to sleep. In the morning, I headed west out of Youngstown and realized I had forgotten my travel bag. Including my winter jacket. But, by this point, it would’ve made it at least moderately difficult to get to my game at a leisurely pace. So, I figured I could make due once I was there. Plus, the temperatures were going to be decent. Mid 40s was the absolute coldest I could expect. So, I didn’t fret it too much.

This weekend I am in Indiana. First game is northeast of Muncie between the Delta Eagles and the Greenfield Central Cougars. Kickoff set for 7:30pm. #40 @PaFootballNews #BeyondTheKeystone pic.twitter.com/qbcnrVdJqb

I traveled west along I-76 to I-71 to US30. Taking my usual route, I followed I-75 south to Wapakoneta and west on US33 to St. Marys. Where I stopped for gas, and got Arby’s for a late lunch. I tried the Real Country Style Rib Sandwich. It was decent. But incredibly dry for rib meat.

From there, it was OH29 west through Celina to the state line where the photo was taken. The road turns into IN67 and heads southwest from US27 in Portland to Muncie. A turnoff travels west to the northeastern corner of US35. And just short of that intersection is Delta High School sitting by itself surrounded by cornfields.

Delta’s booster are some of the best you’ll ever find. The reason I’ve come back twice? The school really supports anyone covering their games. And I’ll stand by Indiana HS Football in any argument over fan support. Even in the chilly, breezy, October night.

After walking the field pregame, it was time for some football.

This was my third time seeing the Delta Eagles. And first time seeing Greenfield-Central. This game turned on the pick six. Still scoreless, Greenfield-Central’s Lane Wadle jumped an inside pass and ran it back about 65 yards. After that, Delta struggled to keep up. Mustering only a single score. But a regrouped second half squad couldn’t punch it in, and fell, 28-6.

After that, it was off to Daleville for a hotel. Located on the southwest side of the Muncie bypass, it was one of the cheaper hotels. Decent, though.

I finished photos up, and also checked in with South Dakota to see the QB of Pierre T.F. Riggs had accumulated enough passing yards to now be the all-time South Dakota state leader. Lincoln Keinholz is headed to University of Washington. I saw him play two weeks prior at Watertown.

The next morning, it was off to Ball State.

Today I'm at Ball State's Scheumann Stadium for four games of Tri-Eastern Conference football. First up at 10am is between the Union City Indians and the Centerville Bulldogs. #41 @PaFootballNews #BeyondTheKeystone @UC_Athletics @bulldogs_c pic.twitter.com/GLUyoIFZMV

After checking in and getting into the stadium, I left my stuff in the pressbox and made my way to the field with just my cameras. All four games were expected to be one-sided. But, just how one-sided I wasn’t quite prepared for.

Centerville jumped out to a 43-8 halftime lead. Just enough to get the running clock for the entire second half. Bulldogs would tack on three more scores and win, 63-8.

I went and got the rosters for Game 2, and headed upstairs for the nearly hour break between games. I stopped along the way and got a Pulled Pork Sandwich and a gatorade from the concession stand.

This one mimicked the first. A 21-0 first quarter lead ballooned to 48-6 at the half. Northeastern added only two more in the expeditious second half, to win 61-6.

After the game, I got the new rosters for Game 3, and headed upstairs. I watched the Guardians epic 15 inning finale against the Rays on my phone before it was also put on the televisions in the pressbox. This kept me watching from up high through the entire first half for the next one.

Tri High School, known as the Titans, are from Straugh, Indiana. Tri High was formed from the consolidation of Spiceland, Straughn, and Lewisville High Schools in 1968. Hagerstown came in as the underdog, and put up a fight for a while, holding Tri to just four first half touchdowns. Tri would score just 2:16 into the second half to start the running clock. Another third quarter score would make it 41-0, and that’s all they’d need. I climbed up the south endzone seats for the final few minutes for full field photos.

It was back upstairs to wait out the intermission between games. With the running clock, games were finishing in just about two hours. Plenty of time for the next game to start three hours after the previous kickoff. I got rosters one last time from the entry, and made my way upstairs.

I got back downstairs to the field for the first half of game four. Which was all I was planning for photography.

Aubrey Weigand would pull kicking duties for Winchester, one of the first female kickers of the season in games I’ve attended. Winchester would jump out to a quick lead, and take a 28-0 position at halftime. Though the running clock would be elusive in this one. Winchester would score, but the PAT was no good. Leaving things at 34-0. And then, finally, Lincoln would score the first offensive touchdown by a trailing team all day. Both Union City and Knightstown only scored on kickoff returns in the first two games.

Lincoln would add another touchdown on the final play of the third quarter, to be done by the scant, 40-16 score. But, by then I was back upstairs after halftime commenced. Content to watch it finalize in the warmth of the pressbox. Winchester would get the running clock going with 1:33 left in the game. And Aubrey Weigand would close out the scoring on the weekend with the PAT. Winchester 54, Cambridge City Lincoln 16.

After the game, I got to my truck and headed out. Zipping through town to IN67 and northeast to Portland. I wanted some Milo’s Sweet Tea, but the Dollar Generals had closed. So, I stopped at the Walmart on the southwest corner of town. I also bought some groceries to take home, as the cold of the bed would keep them on the remaining four hour drive home. I also got gas as the Murphy USA was 3.879 and I didn’t want to stop again just for gas.

Though, I did stop at the Speedway in Beaverdam when I exited I-75 for US30. I got a large cup of ice, and sipped my way through a lot of sweet tea on the way through Upper Sandusky, Mansfield, Akron, and Youngstown. I got home just before 4am. Which wasn’t bad considering the 302 mile drive. 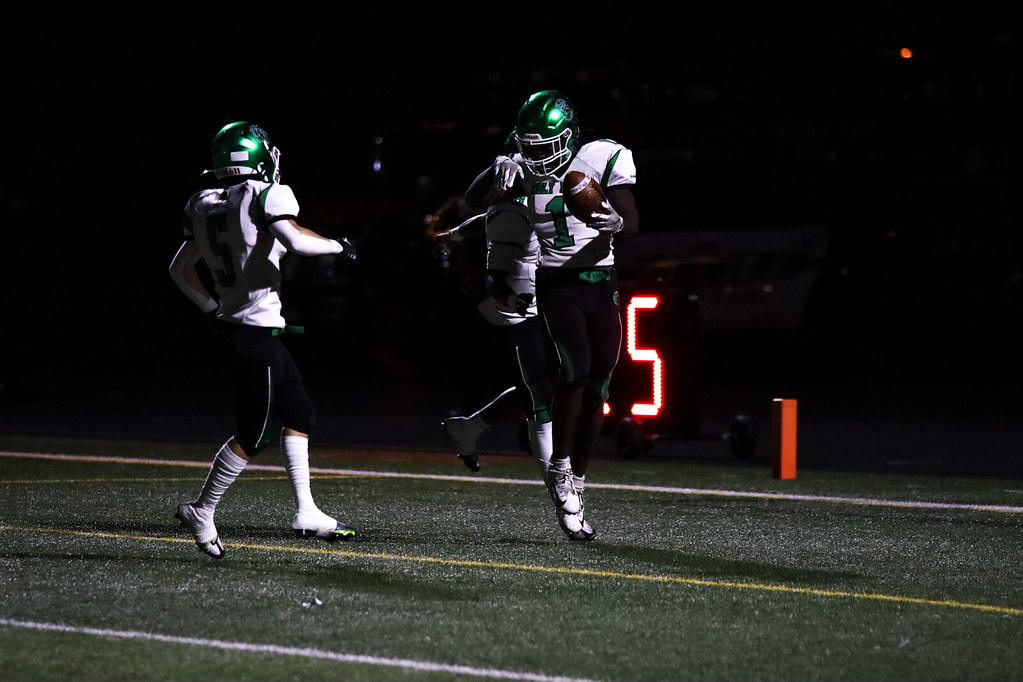 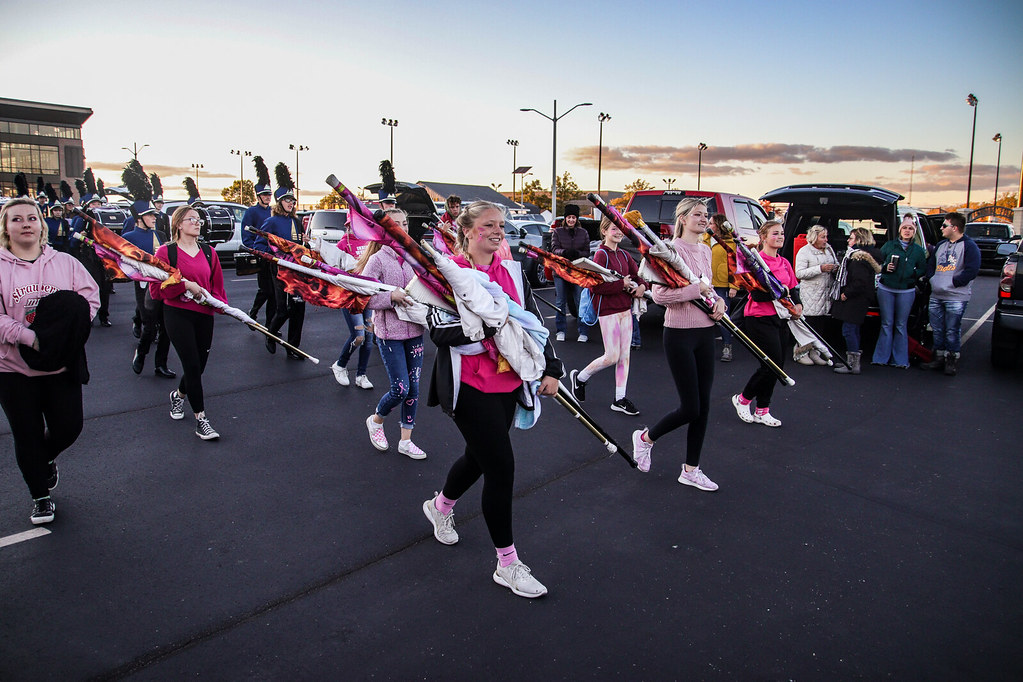 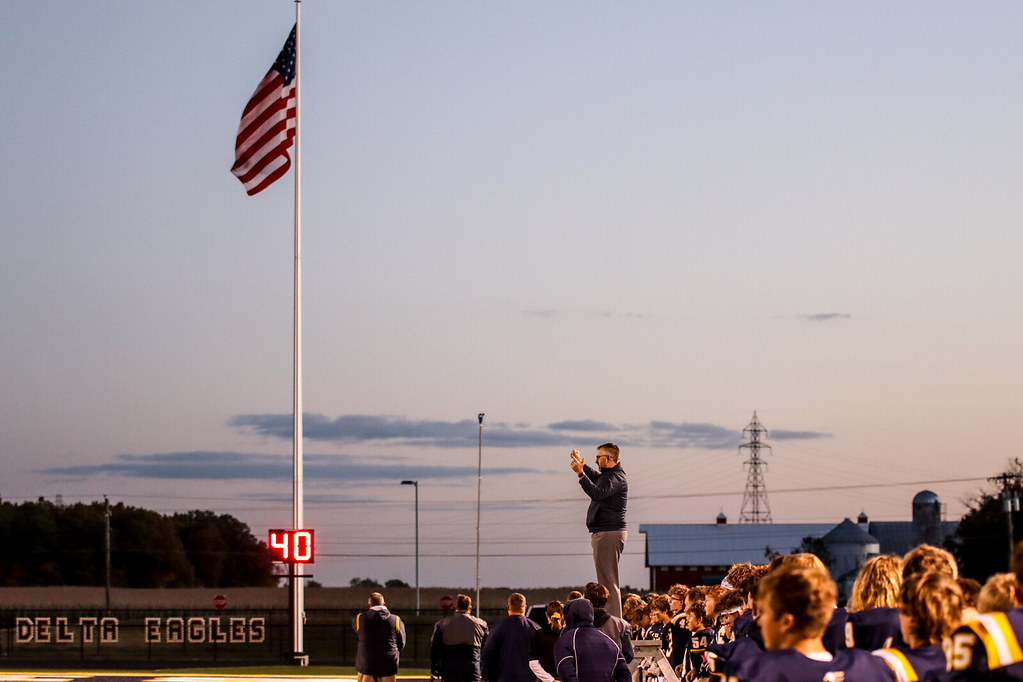 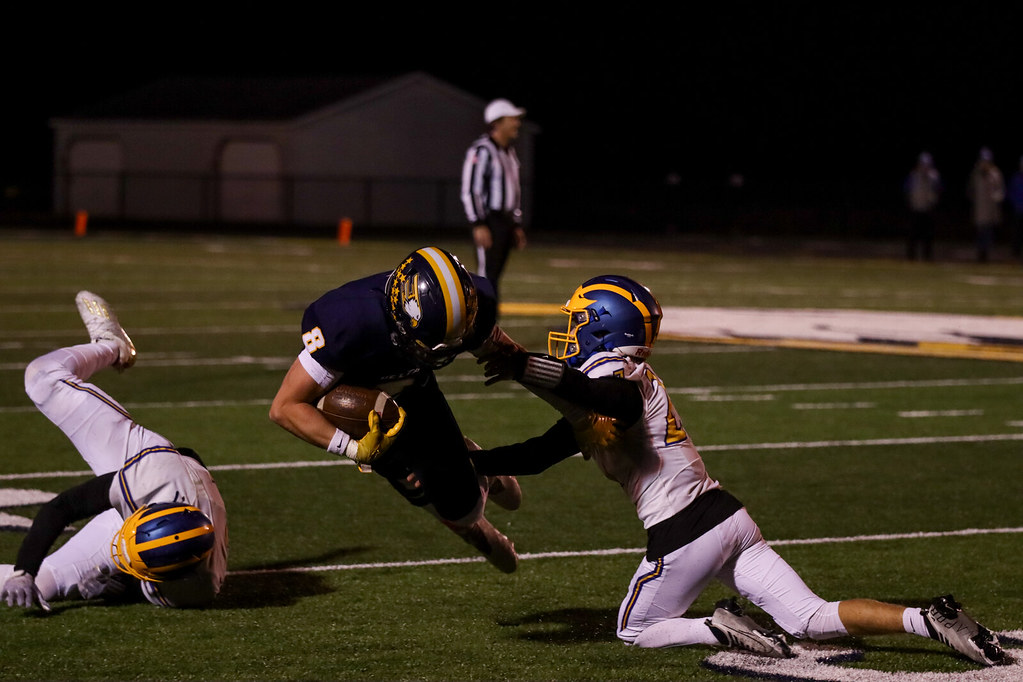 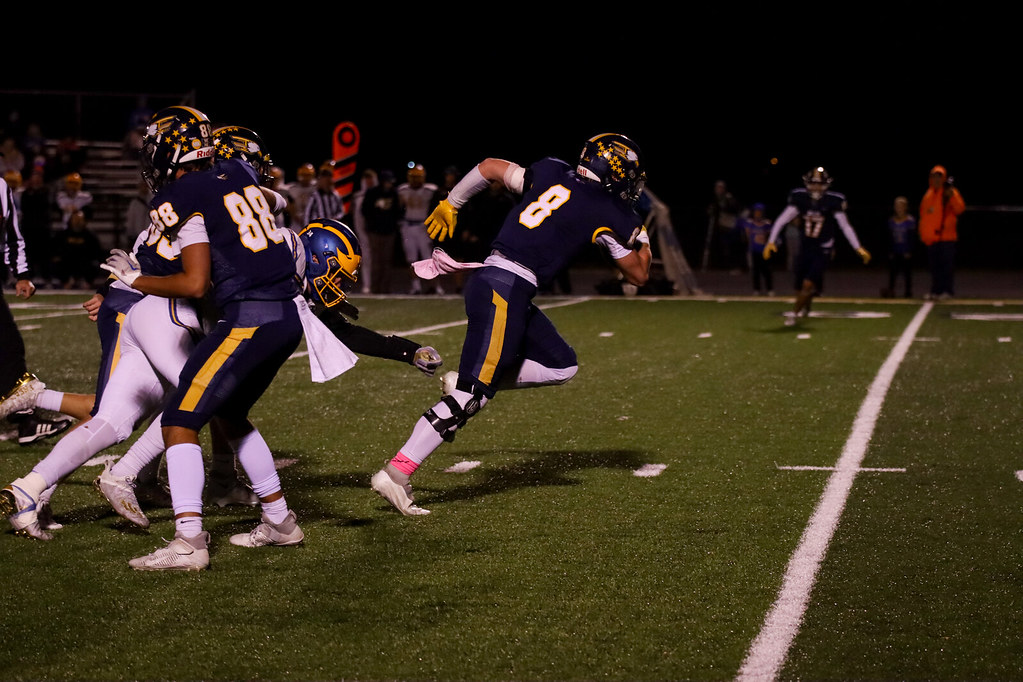 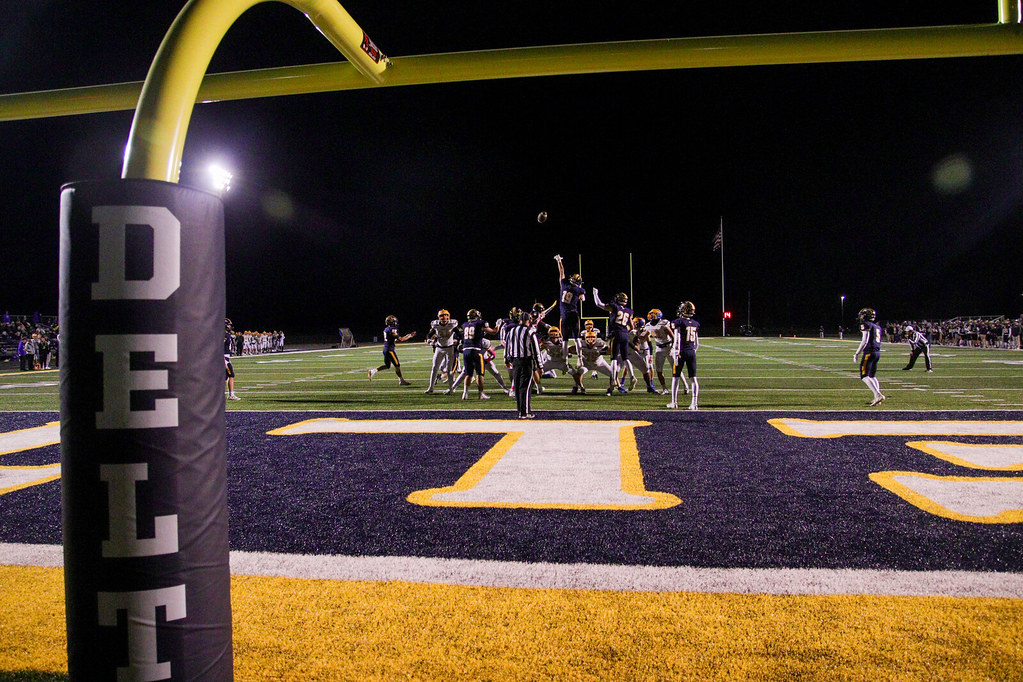 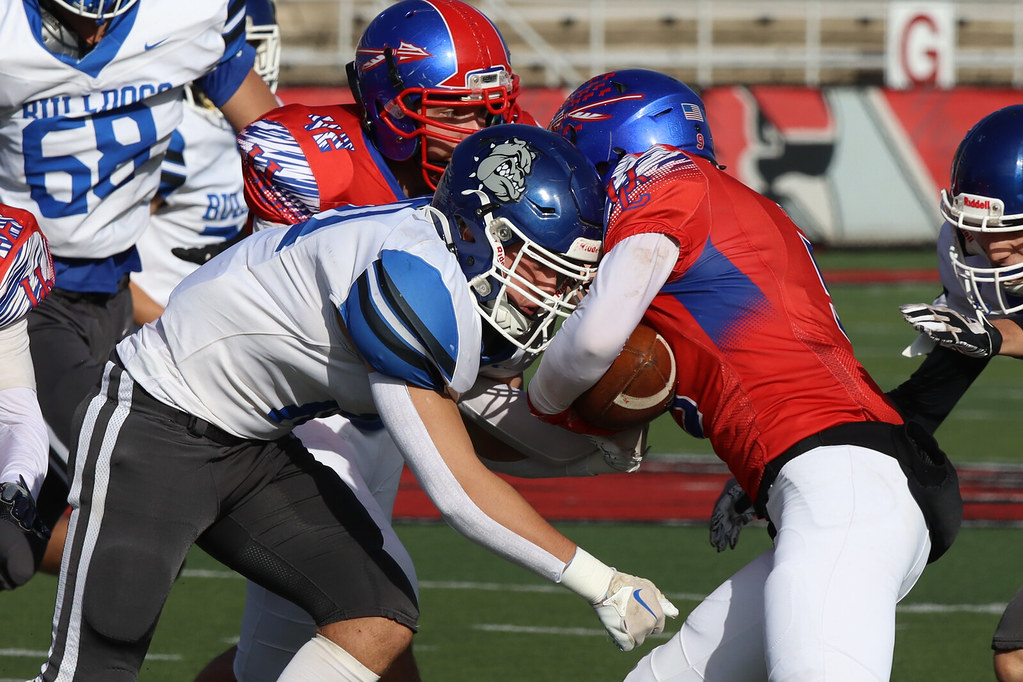 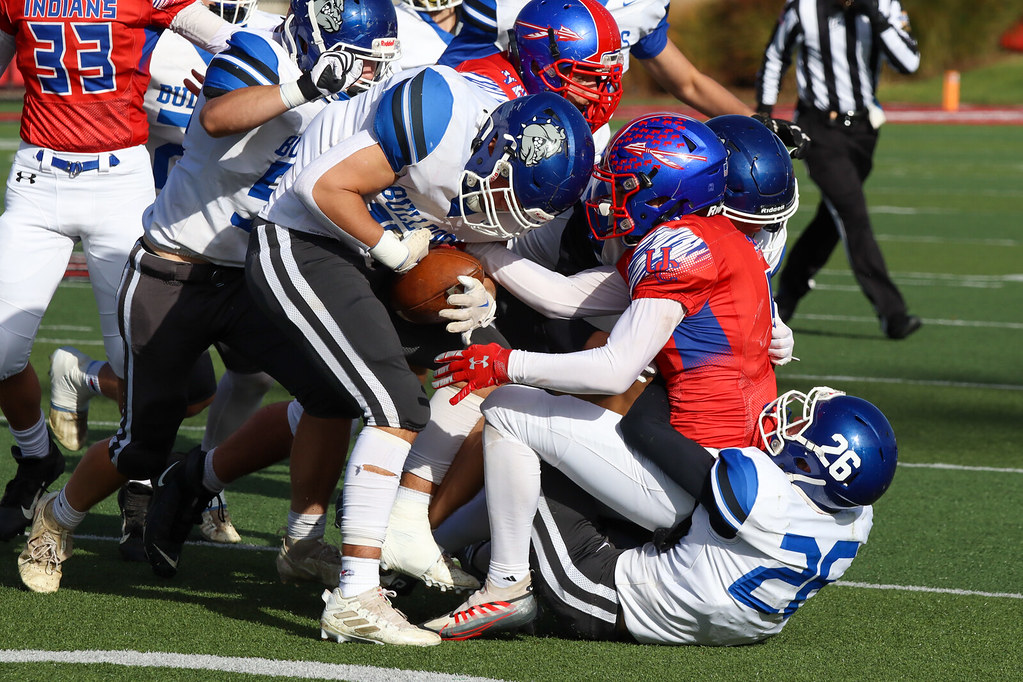 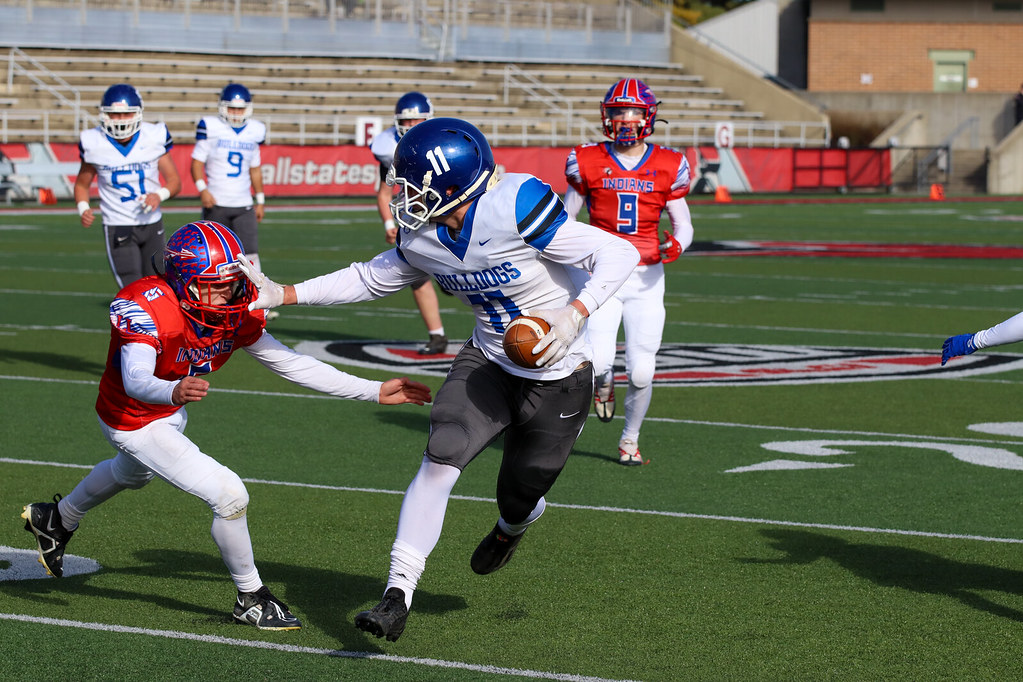 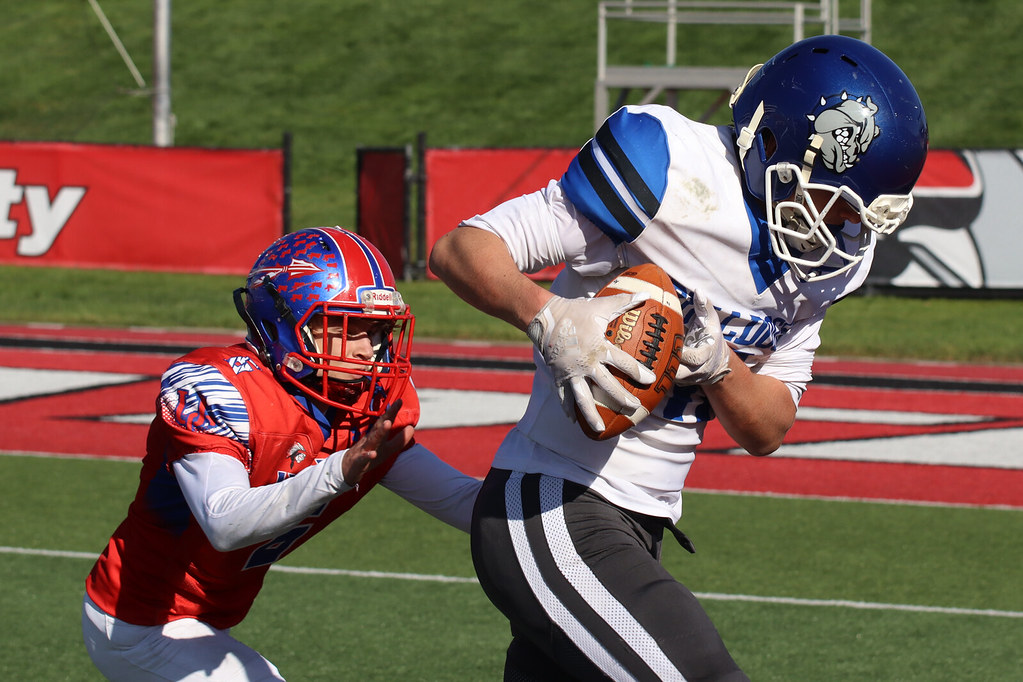 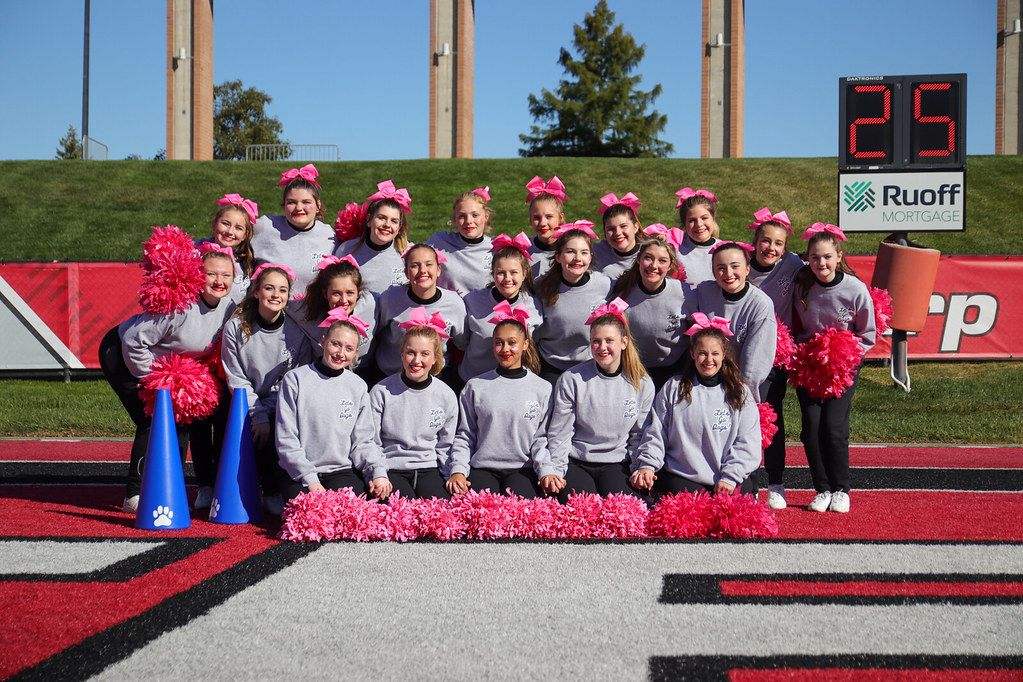 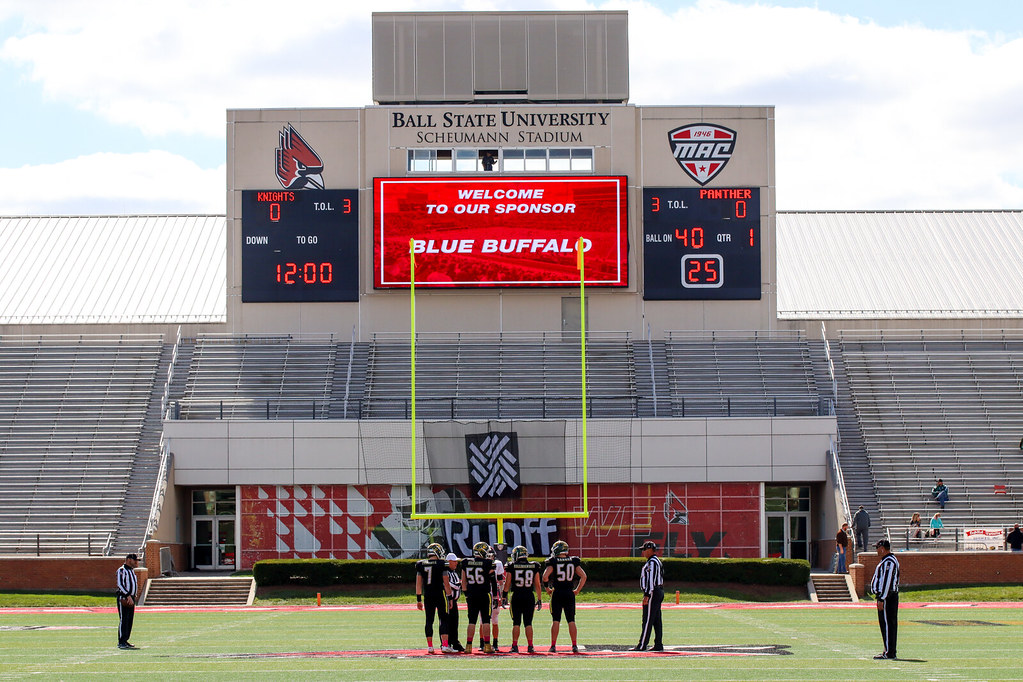 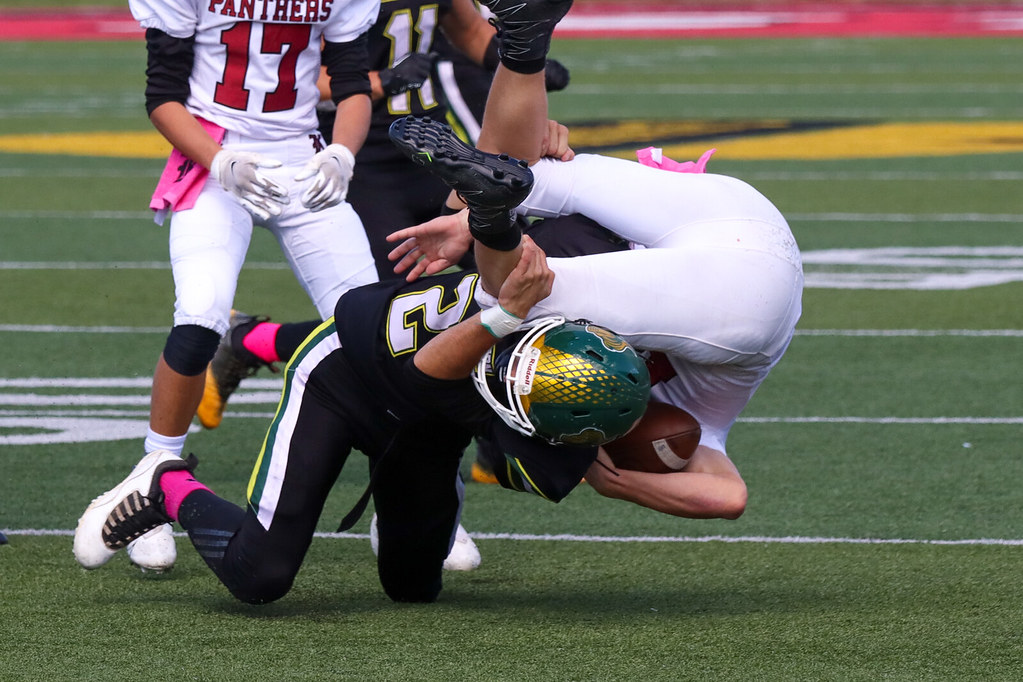 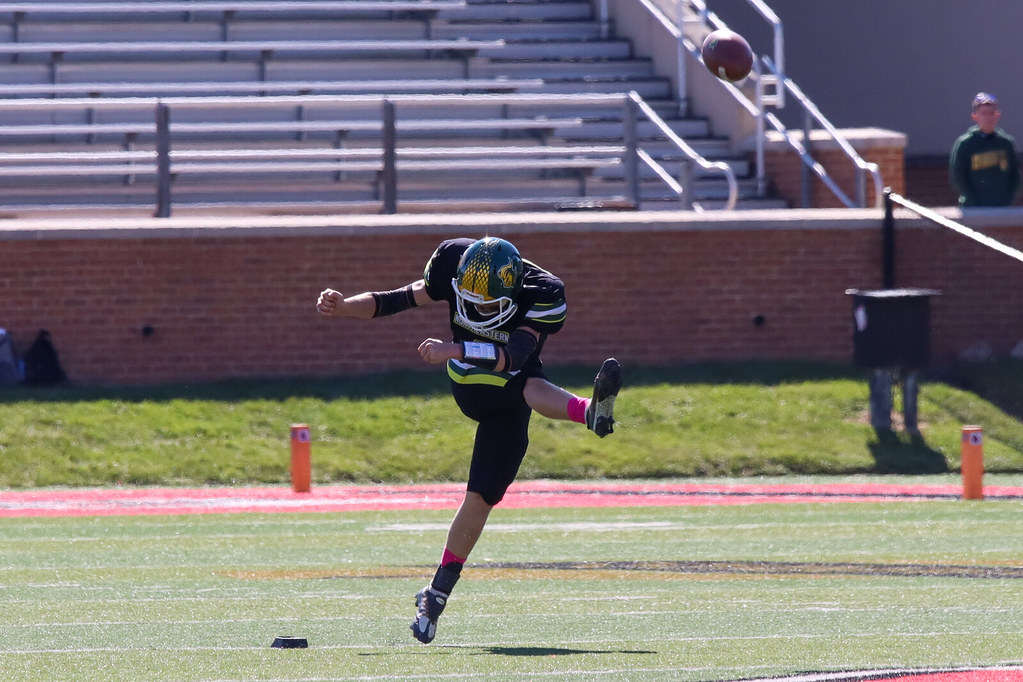 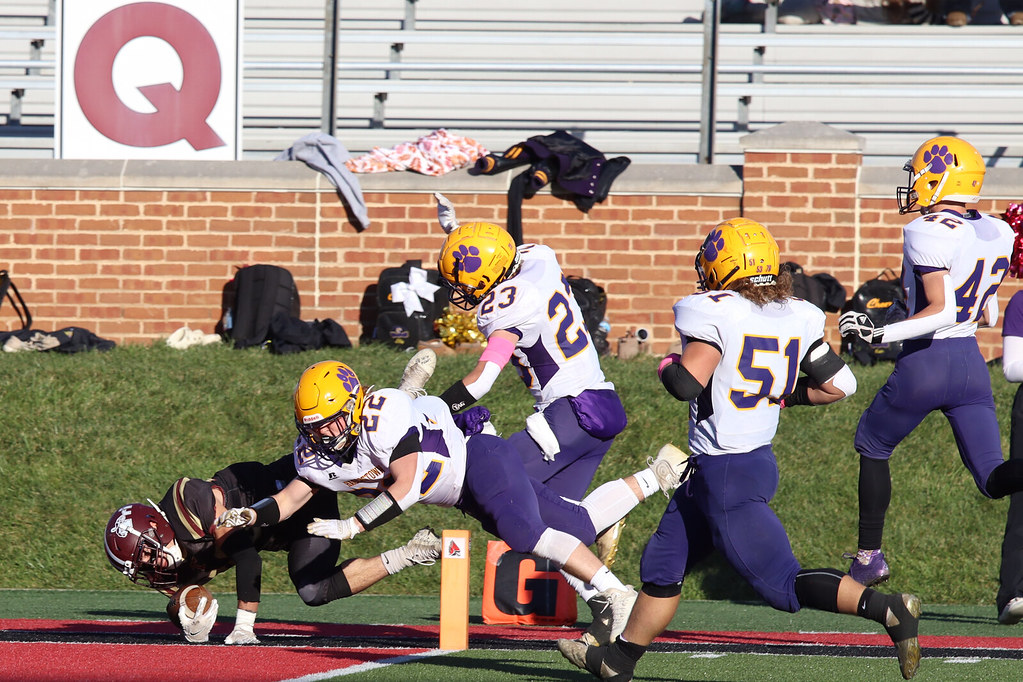 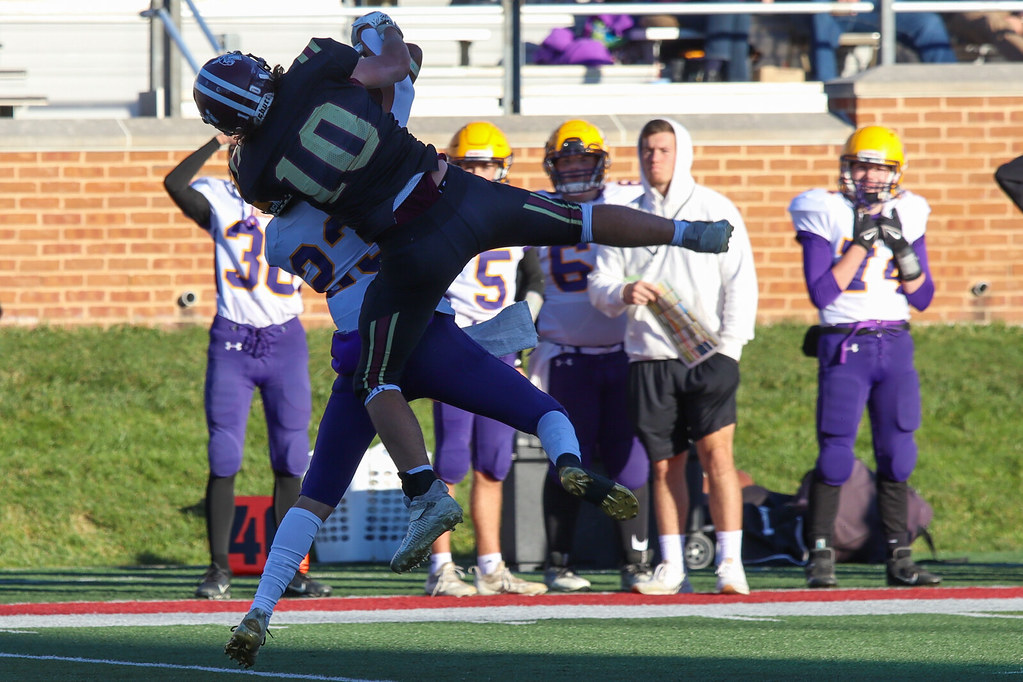 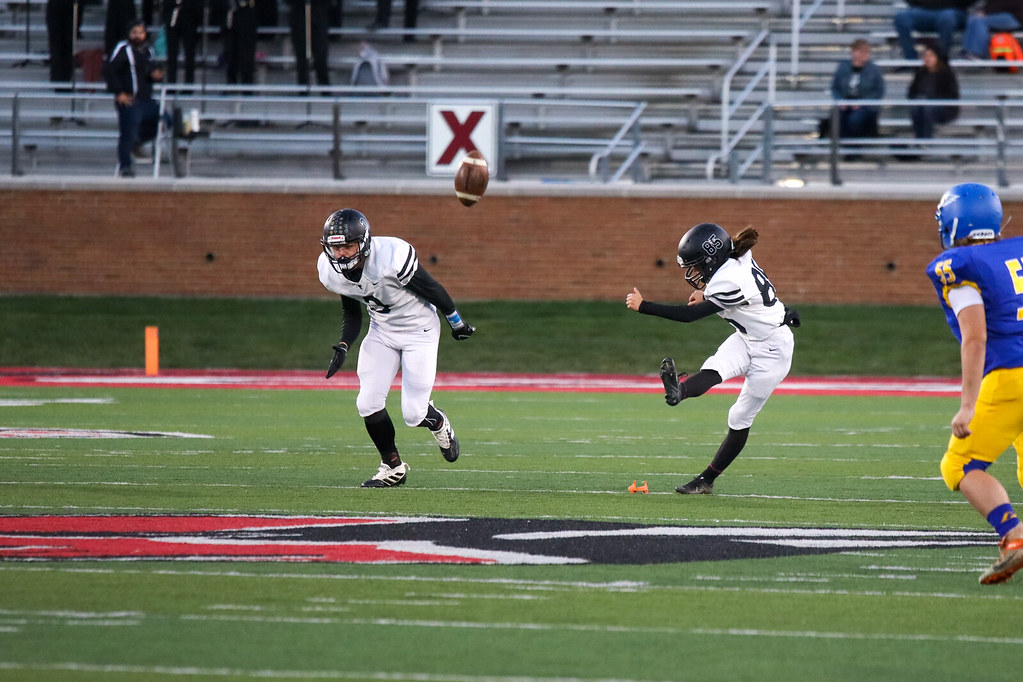 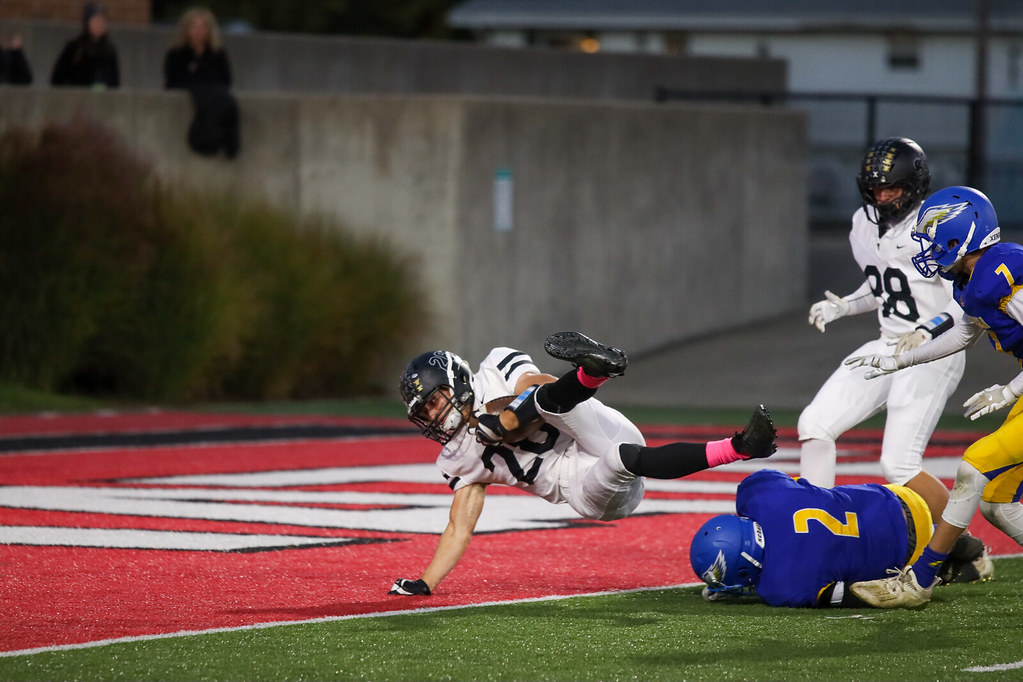 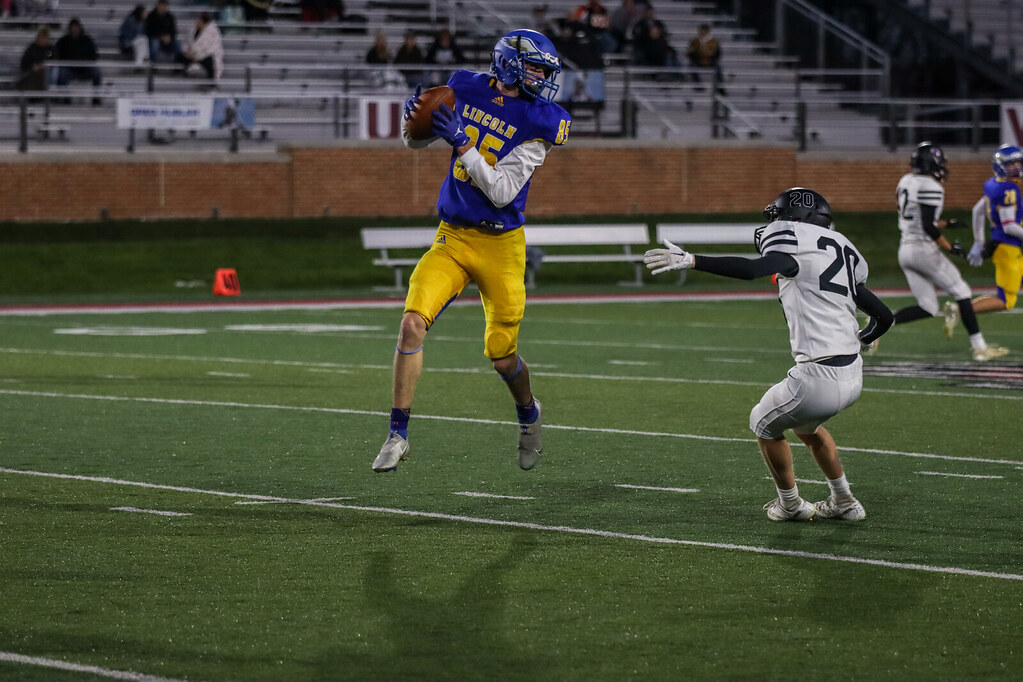 I saw 6 games over three days. New teams included Parma Normandy, Greenfield-Central (IN) and all eight teams on Saturday. I did not visit a new stadium. As I have been to Delta three times now, and Parma’s Byers Field/Robert C. Boulton Stadium 4 times. I have now seen 12 games at Ball State’s Scheumann Stadium.

I’ll be in South Dakota once again. I haven’t narrowed down my Friday game. But Saturday will hopefully be the Rapid City Stevens at Sioux Falls Roosevelt game at Howard Wood Field. I was hoping to see a Thursday game, but my only options are in Minnesota, and I won’t be able to pick one out that would work for me.