My week in Texas wasn’t all it was cracked up to be. I spent four days south of Lubbock. By that point, I wanted to find something I could watch on my way to Kansas. For Thursday, I had options at Lowery Field, as well as Southland. But, the one game I wanted to see was in Follett. The far northeastern corner of Texas.

I had seen Follett in the state finals back in 2018. And their opponent, White Deer, as well. I saw them play at Memphis back in 2010. And, north of Lubbock, it was the only option. So, I headed out early afternoon through the Capstone Canyon and up to Pampa. Following US60 northeast through Canadian and north and east to Follett.

Part of the Texas Panhandle that most don't see: Capstone Canyon. #roadtrippin pic.twitter.com/E2NoLF2AjG

I stopped for food at the little c-store in town. And then over to the stadium. It’s a very small town with a population of 459. The six-man field is situated north-to-south, with some very bright lights. The grass is a short tufted scrubgrass that’s quite spongy. Reminded me a lot of Wiley’s filed in Colorado.

Tonight I'm in the Northeast corner of the Texas Panhandle for a six-man game between the host Follett Panthers and the White Deer Bucks. Kickoff set for 7pm central. #50 @TXHSFB @PaFootballNews #BeyondTheKeystone pic.twitter.com/rjgzhCfI4B

I got to the field and I didn’t have cell service for a while. My phone was dead for a bit, but my tablet had service. So, I managed to get the rosters since I entered from the visitor side. The fences were ringed with cars nosed up to watch the contest. Finally, just before kickoff, my cell phone started with service again. Just enough to get the rosters and stored on the phone. But, that was it for most of the night. The tablet held steady throughout the entire game except a few blips here or there. Tweeting out photos was definitely an adventure.

One of the reasons I chose this matchup was that it was projected to be close, according to sixmanfootball.com. However, it became very apparent early on that it wasn’t going to be. Follett just had a flare for speed and strength that White Deer seemed to lack.

Follett scored first, and held a 40-0 halftime lead. Which is incredibly difficult in six-man football. White Deer struggled to move the ball, and early on gave up two turnovers to Follet’s one. In the second half with the inevitable victory all but certain, Follett struggled a bit to move the ball and give White Deer glimmers of life. A nice possession culminating in a 3 yard touchdown run made it 40-8. I was hoping to avoid a 45 game. In Texas 6-man, a margin of 45 points in the second half ends the game.

Late in the third quarter, Follett would score again. And then add to the total with a short drive ending in a ten yard touchdown run. It was enough to end the game without needing a PAT. Follett would win, 54-8.

After the game, I drove about an hour east to Woodward, Oklahoma. A small outpost in the northwest corner of Oklahoma. Before leaving the next day, I stopped for a bacon cheeseburger and a pulled pork loaded baked potato from Hutch’s Deli, which is part of the Hutch’s Oil & Convenience Stores. Think Wawa or Sheetz without the touchscreens.

So that’s where I headed. And got there just at kickoff.

There was no time for any pregame tweets. I got to the gate just at kickoff and got a copy of the rosters. I then had camera issues, so spent the next couple of minutes getting that situated. Where I missed two scores. First was on the opening kickoff. And the second was a score by Pratt.

Now, unfortunately this stadium’s lighting is dim and yellow. With the home team decked out in black uniforms head to toe, made photography a bit more adventurous and aggravating. Pratt, though, was in all white with gree lids. The Greenbacks, as Pratt is known, are referencing frogs, not money.

For a playoff game, it was somewhat sparse on the sidelines. Only a couple other photographers. And two of them clearly with the two teams. The stands for Pratt were packed. While Holcomb had a great showing but a little sparse in spots on the home side. Still a lively and boisterous crowd. Especially the student section that was on the western end of the stands making noise.

Pratt, though, was just better. Holcomb wasn’t giving up at all. But, as the first half wore on. You could see the chinks in the armor defensively. And the struggles offensively. Pratt loaded up, with three second quarter touchdowns. Including a backbreaker with 39.9 seconds left before intermission.

Holcomb didn’t give up, though. They rallied in the third to start the second half. A 25 yard run down the left made it 34-20. And life was breathed into the Holcomb faithful. But a third and one play, where Holcomb needed the stop to force the decision on a 4th down to kick or go for it, instead busted a hole and Max Younie went 33 yards to paydirt.

Holcomb made it a 15 point game on a QB run. It didn’t help, as Max Younie, throwing this time, for 52 yards on jailbreak defensive end coming right at him, chucked up a 52 yard TD pass before getting leveled. Holcomb trailed 47-26, and kept their spirits high as they drove the field one last time for six. A pile moving touchdown from 4th and goal at the 1. A two point run by the QB Damon Mesa ended the game’s ledger. Pratt 47, Holcomb 34.

I got the game situated and took a few photos from around the field before calling it a night. It was a fun game and wish I had gotten there earlier before kickoff. But sometimes things just happen.

For Saturday, I had no options. The closest game was in Burlington, Colorado. A short 330 mile round trip. As much as Burlington has been on my bucket list for Colorado schools. I decided to pass. If Cheyenne Wells, Wiley, Eads, Kit Carson, Holly, or even Springfield had been hosting a Saturday afternoon game I would’ve made the trip. 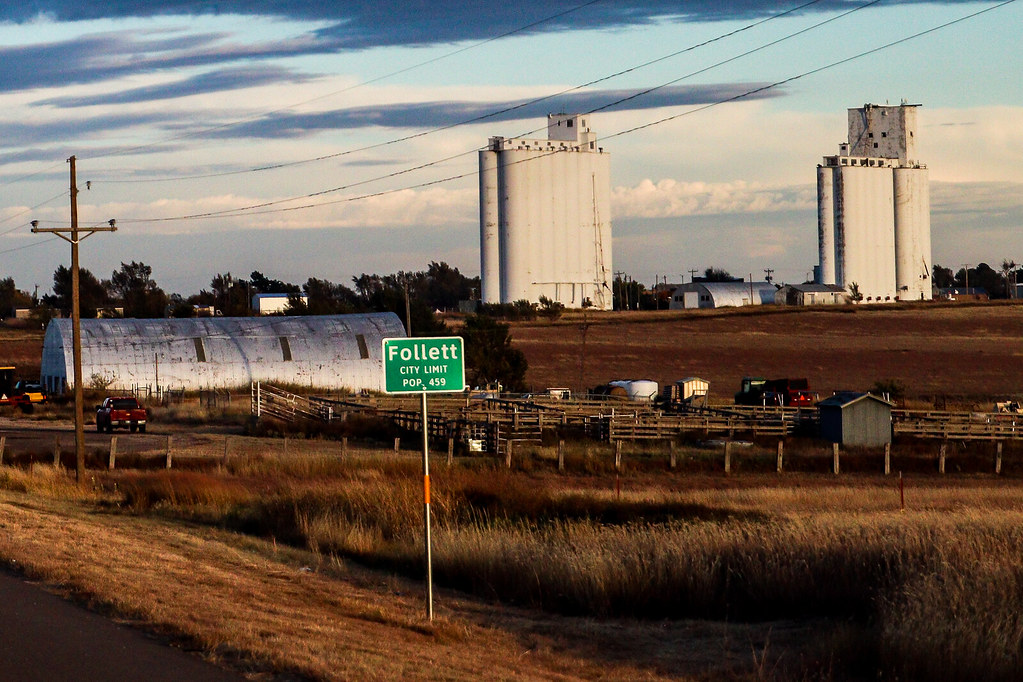 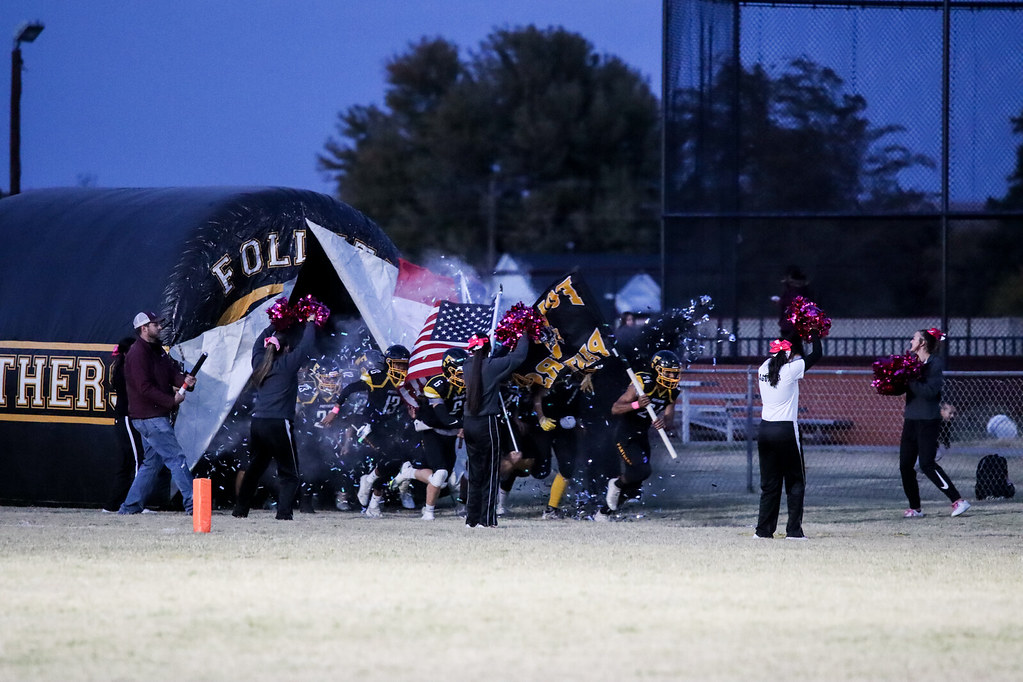 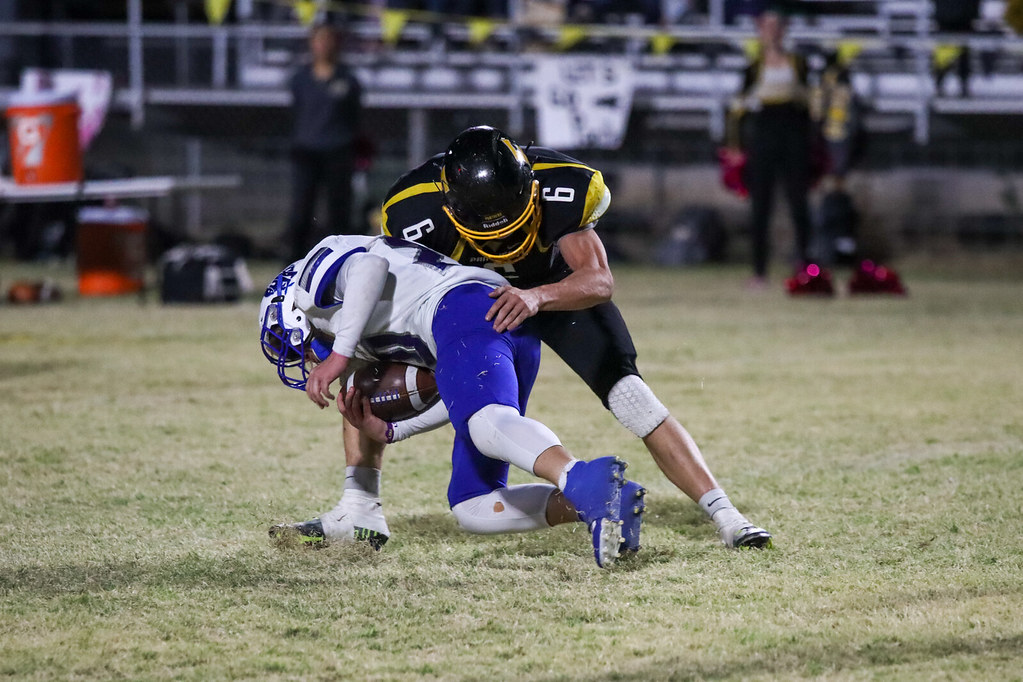 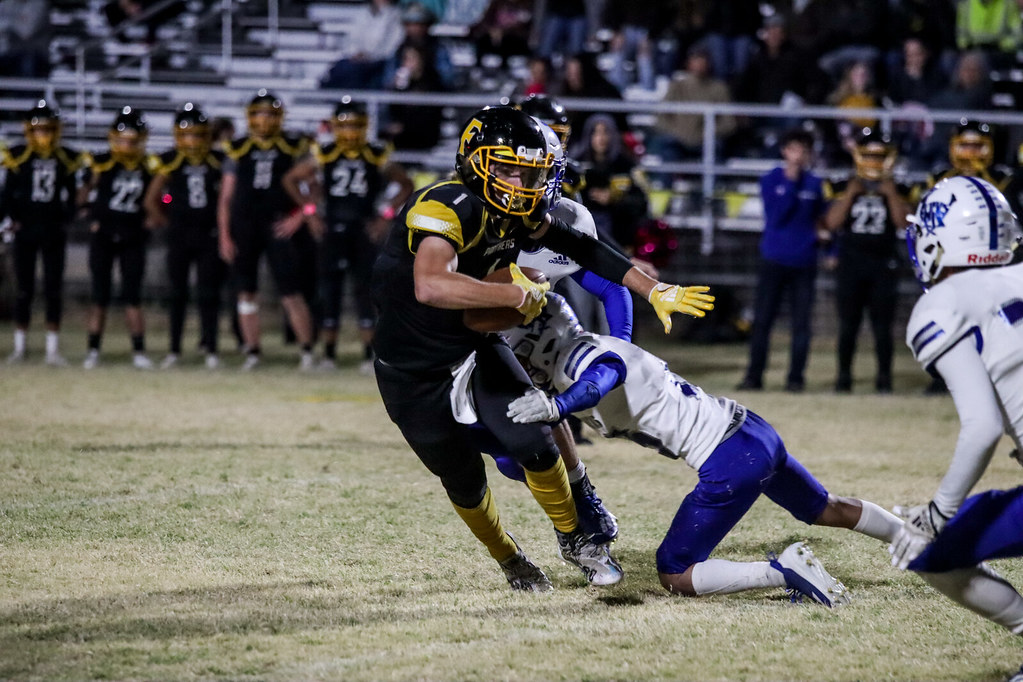 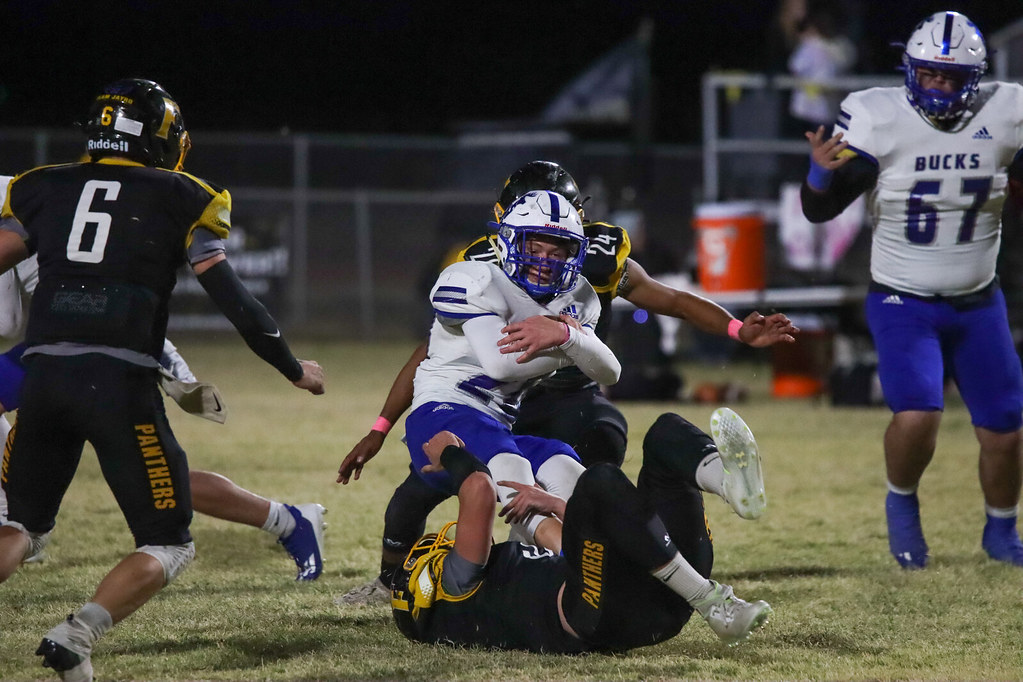 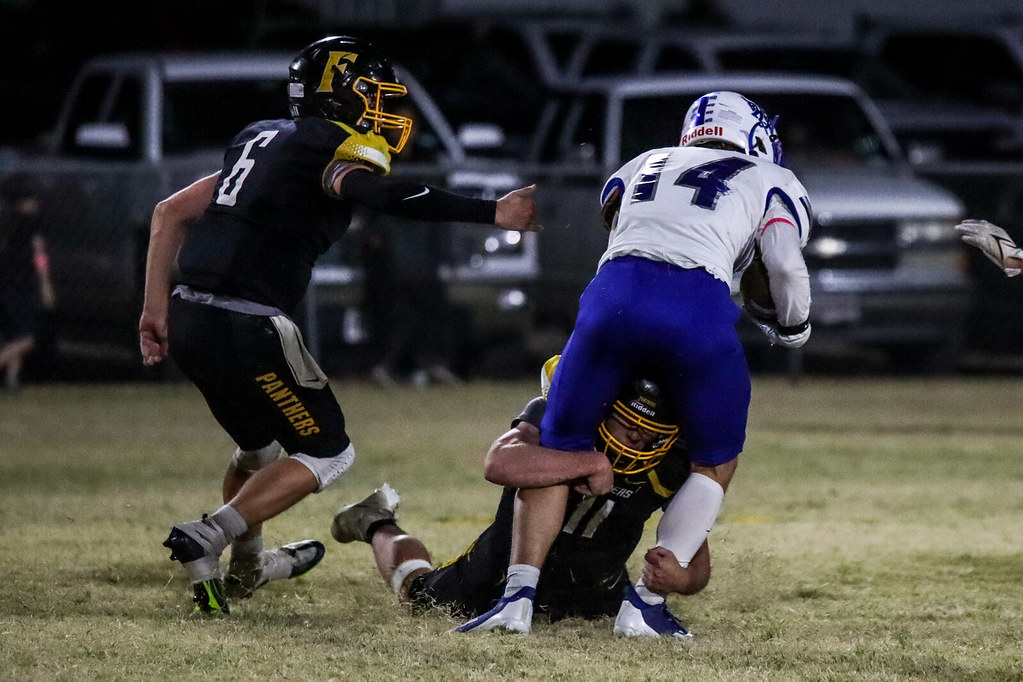 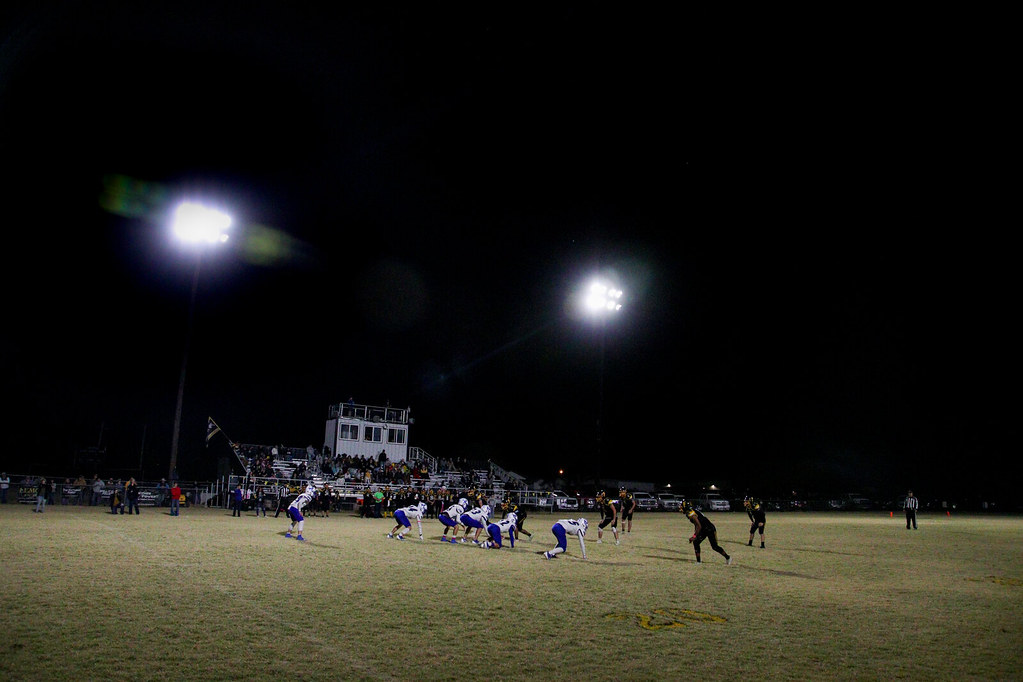 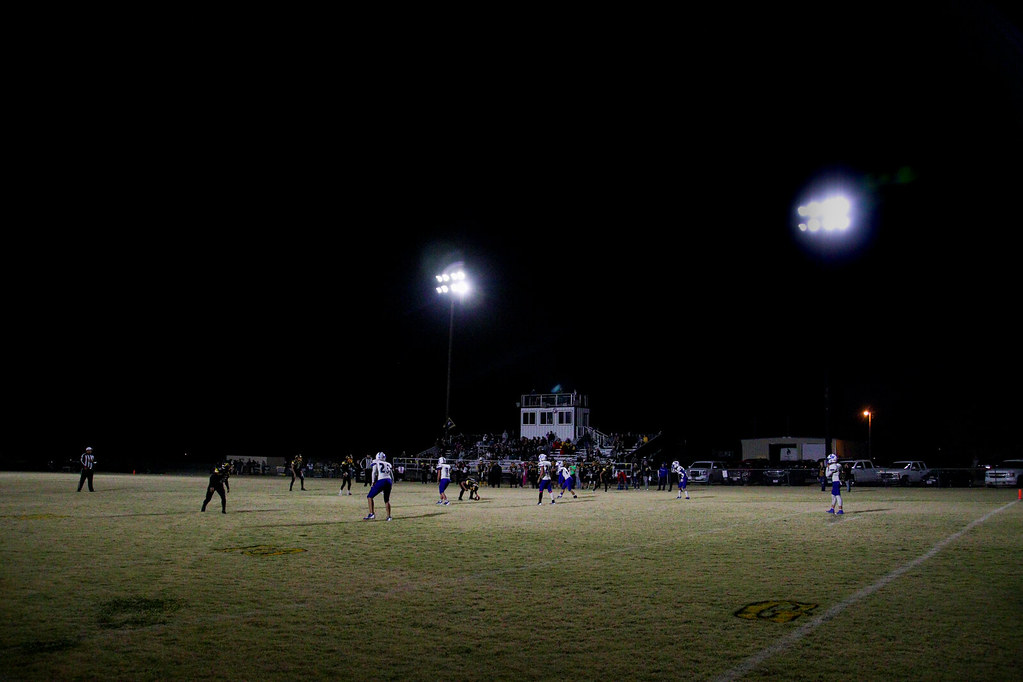 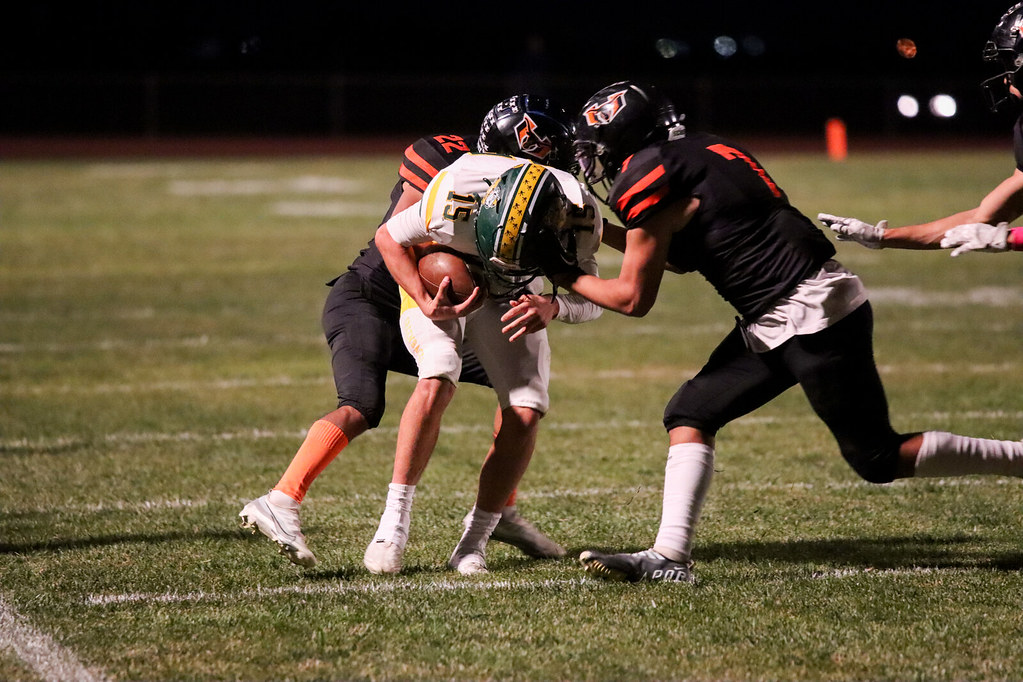 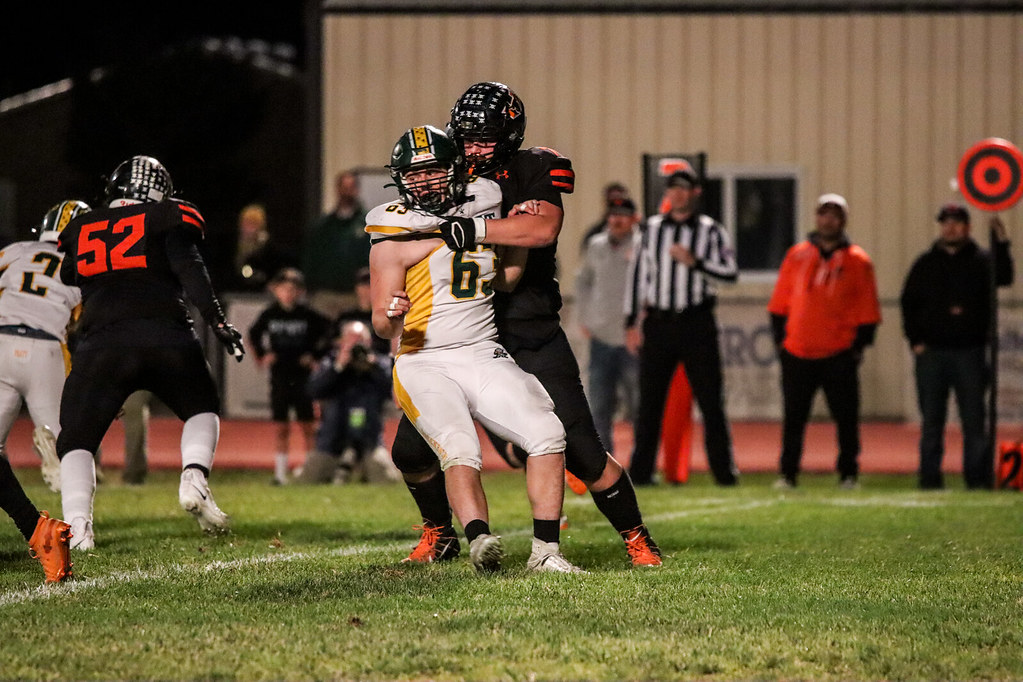 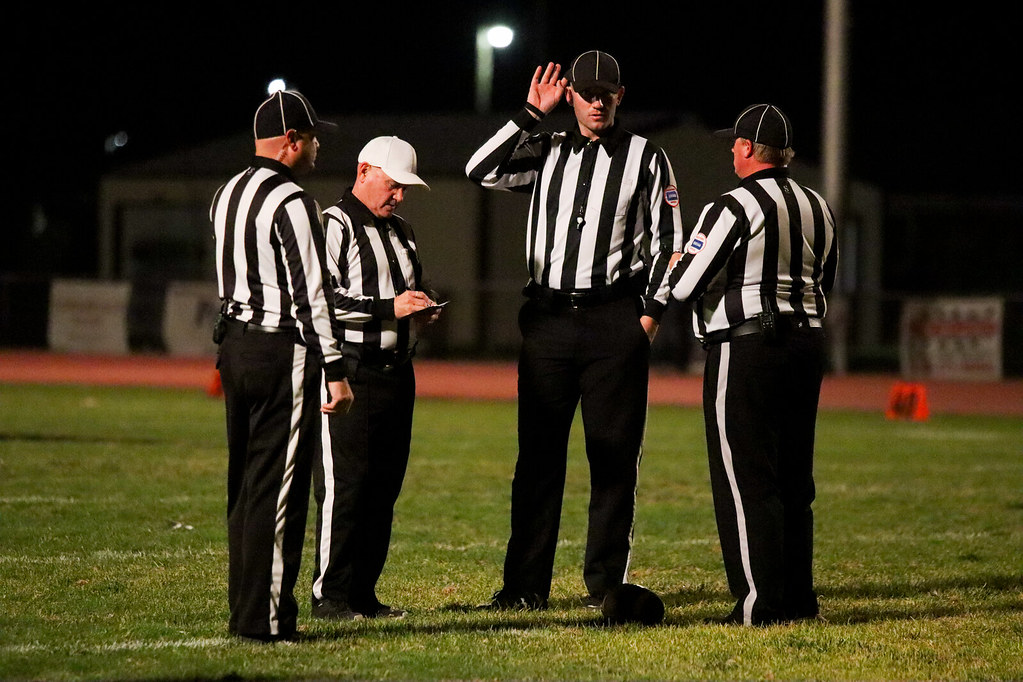 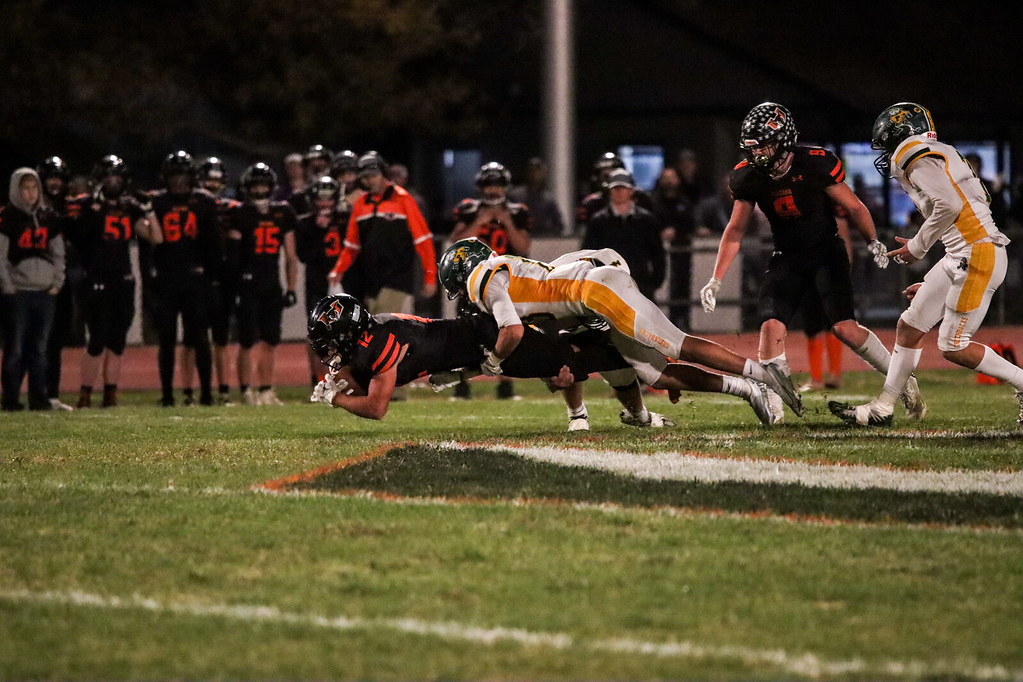 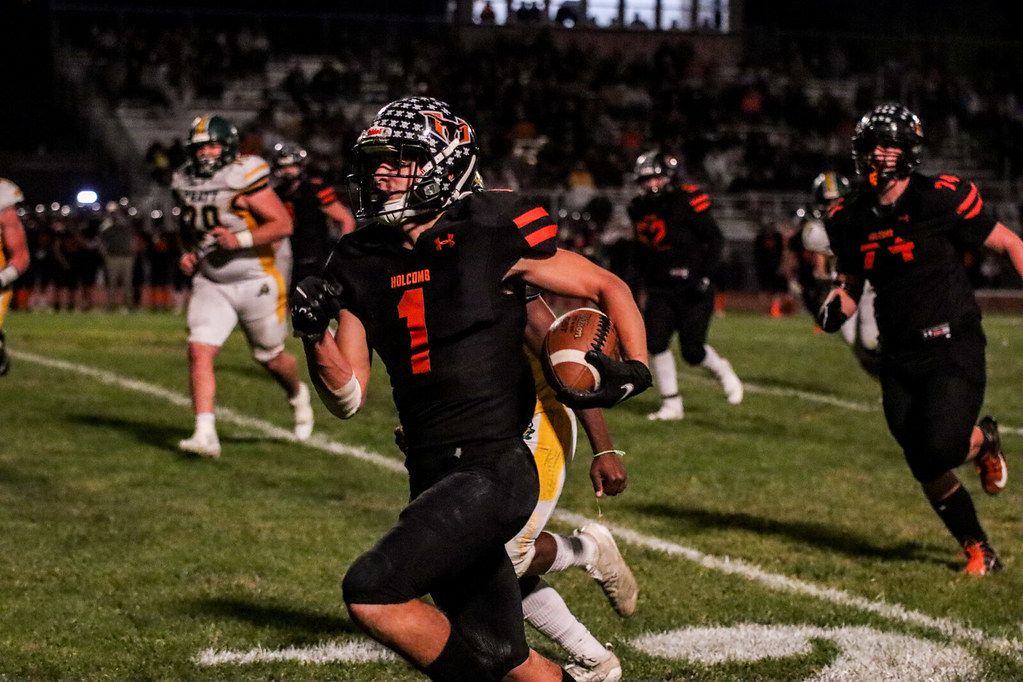 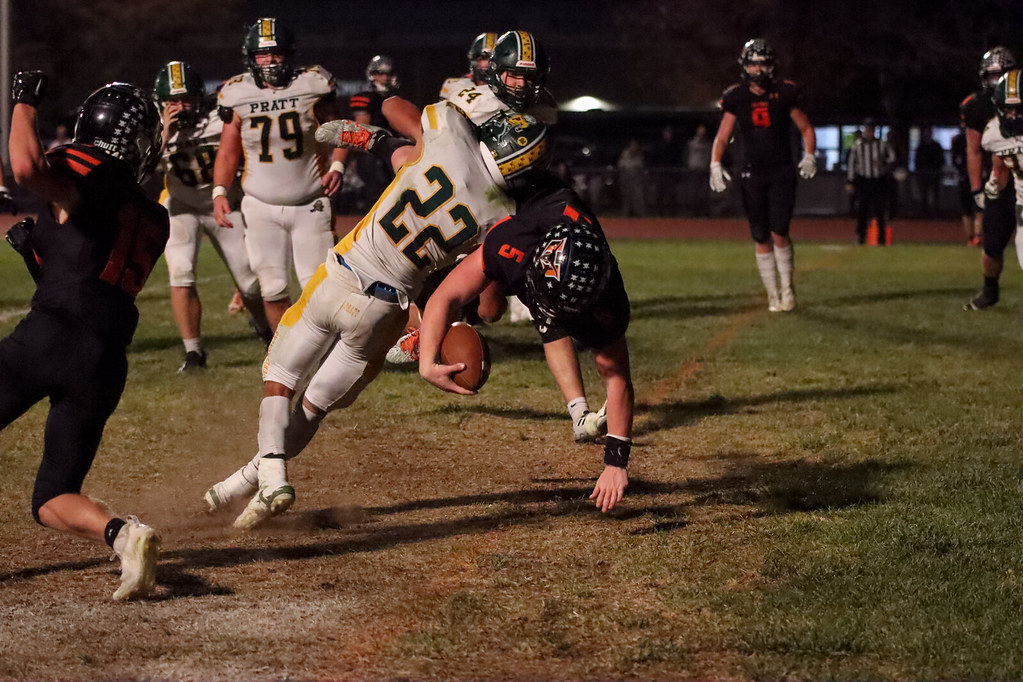 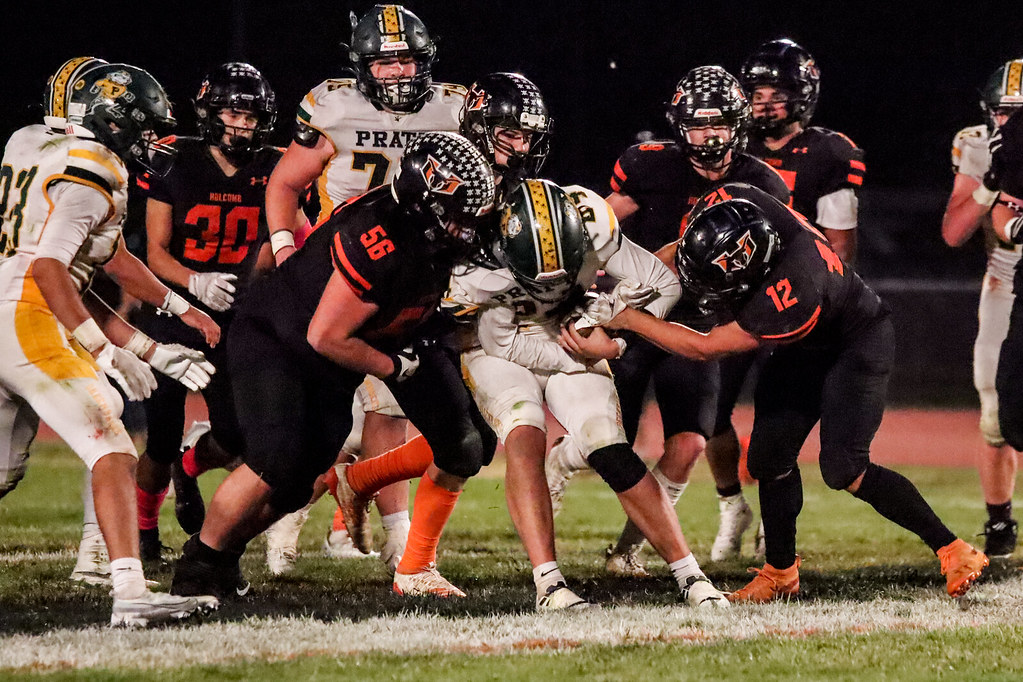 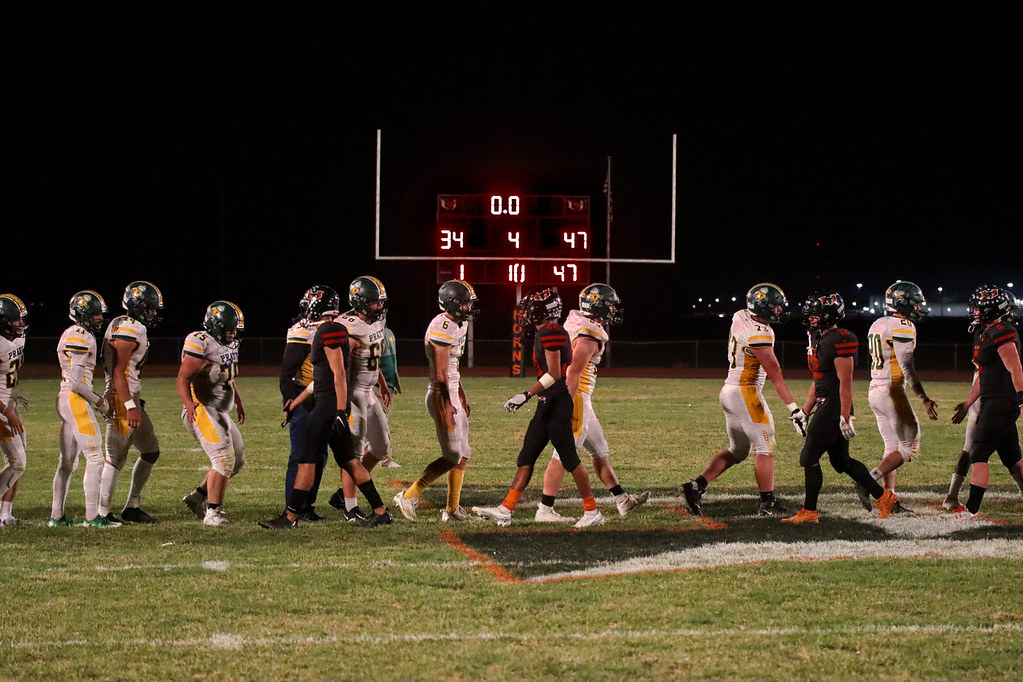 For the weekend, I drove 513 miles from Lubbock to Holcomb in total. Only non-business related expenses was $56 for food the two days of games. The C-Store in Follett, the Hutch’s Deli, and something from the Love’s down the street from Holcomb High School.

For the games, I had seen both Follett and White Deer previously. But never had seen Pratt or Holcomb. Both stadiums were new. Kansas was my 12th state on the year.

I plan to be in Fargo, North Dakota for as many of the games at the Fargodome as possible. The Minnesota State High School League has 9 Sectional Finals scheduled just across the Red River at the Fargodome. Four are scheduled for Thursday and five on Friday. I should get in for press for them. But it’s just an issue of whether I _can_ do all nine. I am planning to be home Monday. And then a friend and I are driving to Iowa for fourteen games at the UNI-Dome. And then the next week, fourteen games at US Bank Stadium in Minneapolis. And then four games at Acrisure Stadium (formerly Heinz Field) in Pittsburgh. So, a busy stretch for me.