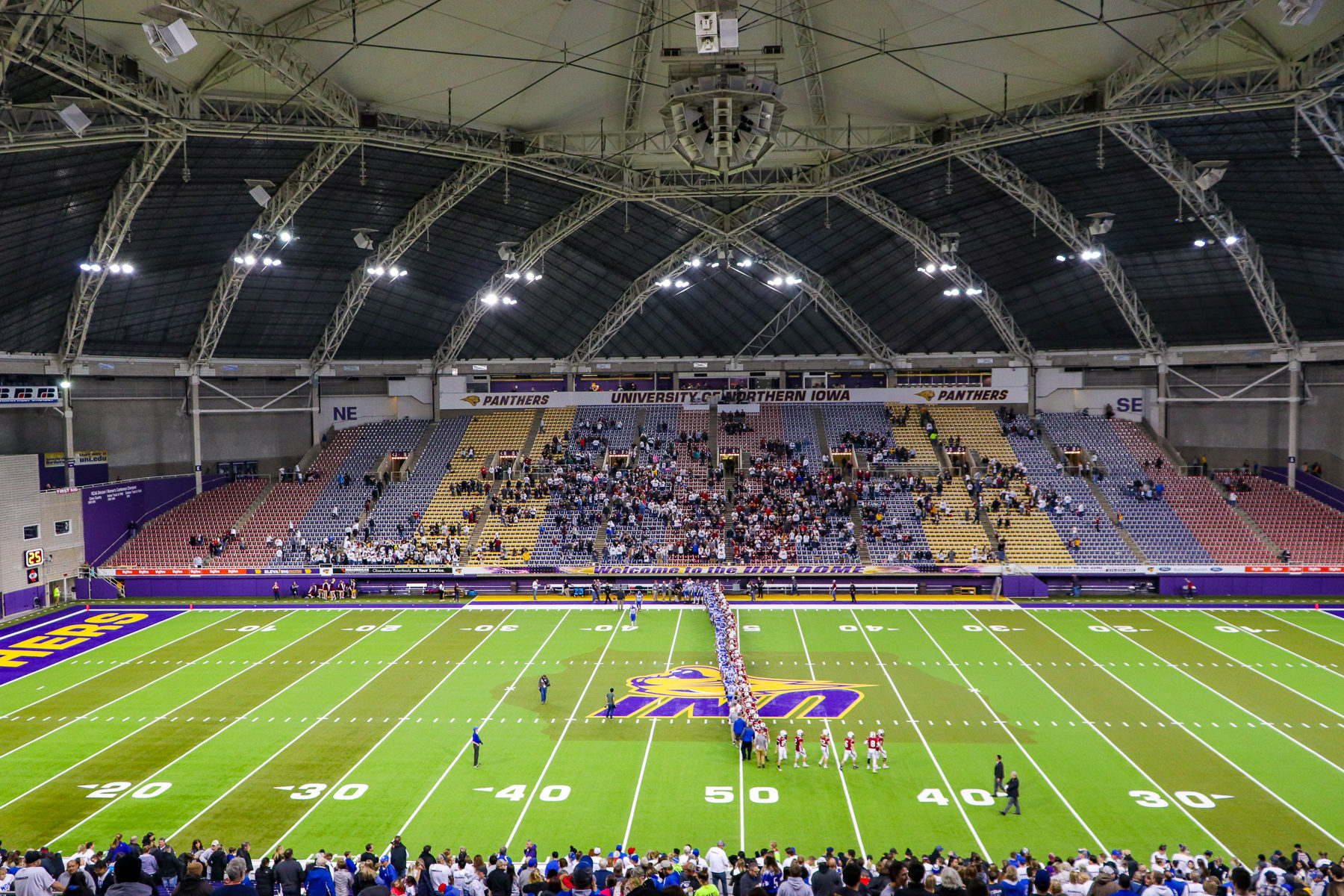 This update will be a little more slimmed down than previously. A lack of time and twelve games make a full recap a bit cumbersome. This would be my third trip to Cedar Falls, Iowa for games. The second for the state semi-finals.

Iowa, like Minnesota, play all semifinals at one predetermined location. The only dome in the state, the UNI-Dome, located on the campus of Northern Iowa in Cedar Falls, does an excellent job hosting them. The following week, the UNI-Dome does it all again for the six state championships.

Iowa has 6 classes. The smallest being 8-Man or ‘8-Player’, depending how they label it. It’s a set threshold. So, the size of the class can change year-to-year. The smallest 11-man class, is just called ‘A’. This is strange, because they also have a ‘1A’. ‘A’ was created, again, as a lower threshold that separates teams from the original 1A without relabeling everything larger than them. So, you get A. And then there’s, from largest to smallest, 4A, 3A, 2A, and 1A.

For the semifinals, the twelve games are scheduled as four sessions. A doubleheader session Thursday morning for 8-Man, and a Thursday evening session for 3A. Those games are scheduled for 9:30am and 12pm. And then 5:30pm and 8:15pm. Though that nightcap kickoff was wishful thinking. It’s never on time. Friday is

Part of the separation is due to the 8-Man field being smaller and the tape on the field needs to be removed. Along with a temporary goal post. It gives a nice intermission. The Friday and Saturday sessions are quadrupleheaders. Games kickoff at 10am, 1pm, 4pm, and 7pm. Friday were the ‘A’ and 4A semifinals. While Saturday were the 1A and 2A semifinals.

All sessions are $10 for tickets, though pre-sale at participating schools are only $8. And give you access for all games during that session. Parking, as well, is $10 per day, and Thursday parking allows reentry for the second session.

Crowds are actually surprisingly good. And a lot of that has to do with the venue. A warm dome, despite the snow or cold outside makes for a great draw. A surprising number of schools from northeast Iowa (due to their region system) helps with attendance.

The trip went easily enough. A stop at the Field of Dreams in Dyersville, Iowa. The ride back included a near run-in with a deer that jumped over the car. Weather was great, except a bit of snow Thursday night and into Friday morning. But the dome was nice and warm.

If you ever travel west through Illinois into Iowa, you have to stop at a Pizza Ranch. Good pizza, and amazing fried chicken. Also, was a stop at HuHot between sessions on Thursday. HuHot is definitely a place I stop whenever I get a chance.

As for the games:

First day of the weekend had a great game. Fremont-Mills was done big, and managed to come back to send it to overtime. With momentum on their side. But New London, making their first trip to the state semifinals, managed to hang on for the win. Other than perennial powerhouse Fremont-Mills, the 8-Man class was full of newcomers to the semifinals.

Friday, Hudson, from just south of Cedar Falls, came out and held on a good challenge by West Hancock from Britt, Iowa. And AHSTW, hailing from the towns of Avoca, Hancock, Shelby, Tennant, and Walnut. It started as Hancock-Avoca, then merged with Shelby and Tennant to form AHST. In 2015, they added nearby Walnut. This, as a consolidated district, was their first semifinal.

The night cap was a bit of a downer. Cedar Falls, who plays their home games at the UNI-Dome, brought a very small crowd, and were facing a 6-5 Southeast Polk team who were outmatched. SE Polk had started the year 1-5, and rallied off three straight wins to sneak into the playoffs. And then two upsets to get to the state semifinals. Only to fall flat against host Cedar Falls.

After that, Saturday had one really close game but a bunch of favorites winning and winning decisively. The second game of the day featured West Sioiux, from Hawarden, and Van Meter. Finishing 38-35. But, the first game was an easy win for local team Dike-New Hartford and Waukon was done in by consolidated and co-opped, Boyden-Hull/Rock Valley, 48-12. The weekend finale, featuring PCM, though so labeled represented Prairie City and Monroe) and West Liberty. The PCM Mustangs were slow and methodical as they pulled away. Little by little. Before posting the first and only shutoff of the weekend. 27-0 over West Liberty.

The state finals are the following weekend, once again at the UNI-Dome.

In New York, the four regional finals took place this weekend. After the 9 sections completed their playoffs (Section 7 and 10 are very small sections), there’s 7 or 8 teams left in each class.

Three Section 6 teams advance to the state semifinals. Only Batavia and Aquinas pulled off victories from Section 5.

You can also follow along my travels and games around the country @Sykotyk in the Twitterverse.