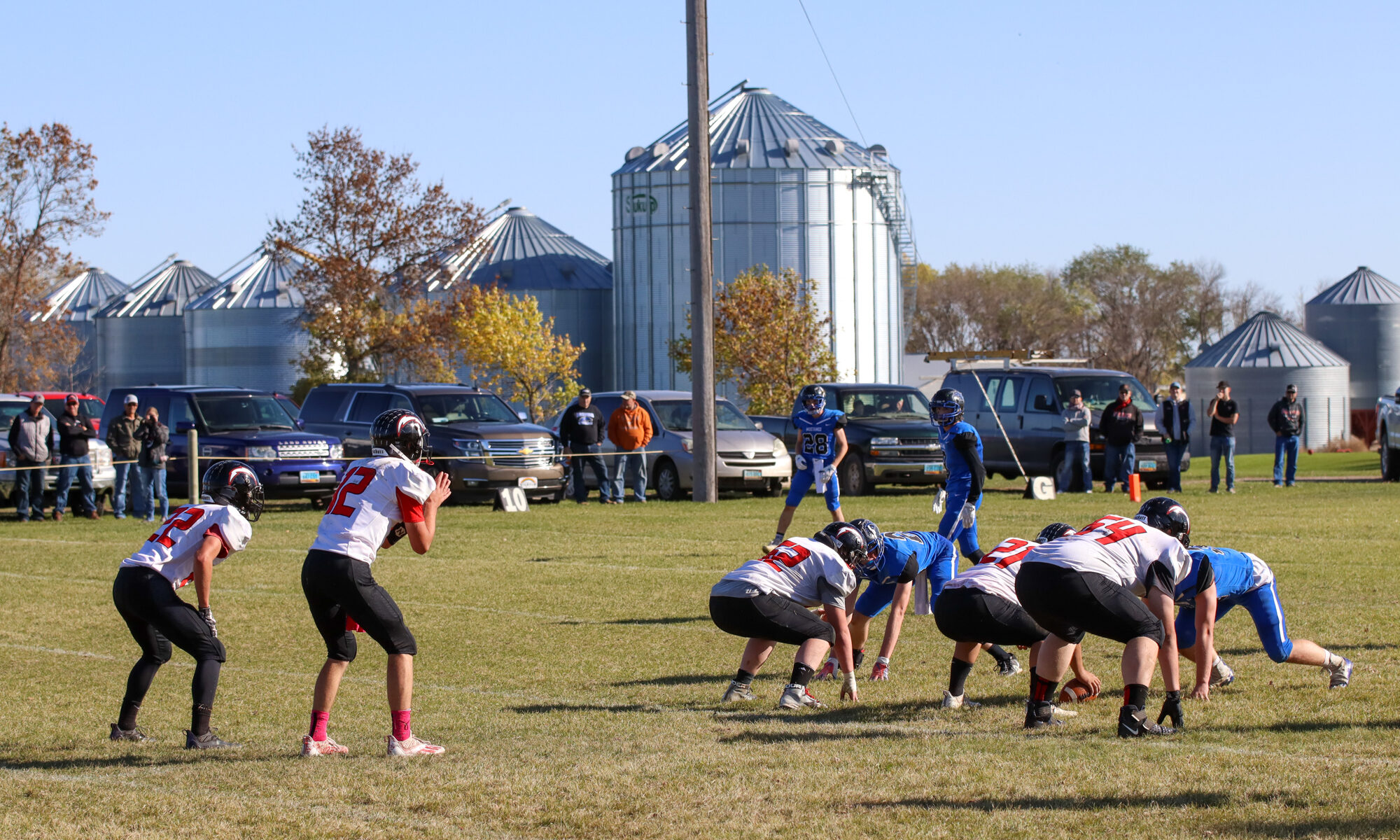 I’ve let these updates get a bit late recently. Mostly because traveling, and then hurting your back, means not really doing much of anything. I had written up a recap of Week 8 for PA Football News, but this will be a quick recap of my personal trip.

I found myself in Sioux City, Iowa for the weekend, so had to find something to do. South Dakota, Minnesota, and Iowa basically only had Friday night games. However, Nebraska had a slew of Thursday night contests. And North Dakota, in a town I’ve been to a few times in the past, had a Saturday afternoon game. So, it was just a matter of looking around for the right Friday night game to go with it.

On Thursday afternoon, I drove from Sioux City, the roughly 40 minute drive southwest into Nebraska to a small town along NE 9, a small little agricultural mecca I’ve been through several times. The stadium sits right along the main north/south road, and is an amalgamation of football and baseball fields. It’s small, with a lit marquee along the road advertising the school and their Pendragon mascot.

So, of course, they’ve been on my bucket list from the first time I ever passed through these parts. And, with a Thursday game, it looked like the best opportunity to see them.

I stopped into town at the convenience store, had some fried chicken, and then went over to the game a block away. Someone was flying a drone across the street. And curious if they were going to fly it during the game. Though I hadn’t really checked on it after pregame. Though I never did hear it in the air once the ambiance of a crowd settled at a dull roar.

The Pender Pendragons are, too, an amalgamation of the Pender Dragons name, though the Pendragons, as a proper name, are unique in high school sports. Decked out in red and white with a feather striping on their pants and shoulders.

It was a cool night. And the small stands were packed. An 8-man game featuring the undefeated Pendragons was a big draw in the area. The crowd was palpable. And then it all kicked off. Pender scored first, but Homer made it intriguing with a 13 yard TD pass and a two point pass to take an 8-7 first quarter lead.

But three Pendragon touchdowns in the second frame sealed the game. The Homer Knights struggled after that, and it started to unravel. Three more third quarter touchdowns and the only thing in doubt was the final score. Homer did manage one last score with a faint hint of foul weather approaching. And Pender got the final laugh, with a 1 yard TD run late to win, 56-16.

It was Pender’s first undefeated season in years. And although hindsight is 20-20, their prospects for the playoffs seemed promising.

After that, it was spending the night in Pender and waiting to head out in the morning. Had I left earlier, I could’ve pulled off a double. Gettysburg’s Potter County was hosting a game at 4pm, and a night game not far away in Ipswich. But, I had already planned on Ipswich. A small town along US12 between Mobridge and Aberdeen. A town I had been through in the past.

Now, Ipswich is a great little town. After miles of endless prairie, coming up on it from Aberdeen really makes you feel like there’s something here. It’s small, no doubt. As the high school only plays 9-man football. But, it’s one of the few small schools still playing without a co-op.

Their opponent on the night was North Central Thunder, a co-op of three schools: Eureka, Edmond Central, and Bowdle. Three towns west and northwest of Ipswich. Edmond Central and Bowdle are on US12 just west of here. And Bowdle is home to one of the best burgers I’ve found at a small mom-n-pop convenience store/gas station/diner all-in-everything Drake’s Place.

Now, I had gathered that this was going to be one-sided. But, I had settled on this game regardless the prospective outcome. However, my biggest letdown was just how dim the lighting was at the stadium. The lighting clustered in certain spots on the field, while others remain incredibly dark. And it’s not condusive to photography. At least my personal standards. Shooting at 10,000ISO is never ideal for quality. Unless the subject is right in front of you. I was also shooting, mostly at 1/500s to 1/800s a lot of the night. The fact the home team was dressed head-to-toe in black certainly didn’t help.

Now, in South Dakota, like New Mexico, at all levels, there’s a 50-point mercy rule. If a team is leading by 50 points in the second half, the game is over. And it really looked like this one might be done at halftime. However, North Central struggled through the second quarter to keep it close. Only trailing, 42-0. A third quarter touchdown got within a whisker of ending the game when the two point try was no good. However, the regular running-clock rule (when 35 points was achieved) had kept the clock moving at a brisk pace. And then a 65 yard pick six ended things with 54 seconds left in the third quarter.

Trevor Beyers with a walk off 65 yard interception return to for a TD. Ipswich leads North Central, 54-0 with 54 seconds left in the third quarter. Game over. @PaFootballNews #BeyondTheKeystone @605_sports @IpswichTigers @EurekaSchool1 pic.twitter.com/9gl8byW3K6

After the game, I stopped in Bowdle for the night. Finding Drake’s Place still open, they had some premade burgers, but nothing fresh. Still, it was worth it. They did not have the cottage cheese pie, though. Which, to my horror, is absolutely amazing.

How. The. @#**. Is. Cottage Cheese Pie the best pie I've ever had? How? HOW?! #roadtrippin pic.twitter.com/wyDhm8xaLB

I did get burgers, though I didn’t document these ones. Before heading out, I was not going to pass up another burger from Drake’s Place.

Burgers for lunch at one of my favorite places. Drakes Place in Bowdle, South Dakota. (one of the three towns that comprise the North Central co-op I saw last night). #roadtrippin pic.twitter.com/ucjGsN1KDK

I then headed north along some smaller roads, through Eureka, and saw a new bucket list location. Eureka is home to the founder of USA Today. And their football field sits across a small lake from town. The entire visitor side is the edge of the lake. The entire view from the home stands must be spectacular. And I hope to see a game there one day. There’s a lot of small towns up this way on my list. Including Gettysburg, Faulkton, and Hoven.

But not today. After crossing into North Dakota, it was a quick trek through Venturia. A small dot I passed through earlier in the year. Though far too small to have a football team, let alone a high school.

Then east along ND 10 into Ashley. My wife and daughter were with me the first time I ever set foot in this town. We had driven around from Faulkton collecting the last remaining counties in South Dakota and southeastern North Dakota, and were looking for lunch. The only restaurant according to Google Maps was closed. But the lady working there told us of a diner in town, one that had just opened on main street. So, we went there.

It was on that trip that I passed by their football field along the south side of 10, just west of town. A small patch of grass with two small stands, a tall independent press box, with the field lined with trees to the west.

It was the perfect place to see a game, I thought. And when I saw that the co-op between Ashley and Wishek (called South Border), was hosting their first round playoff game in Ashley, I had to come up here for it. No matter the distance.

This afternoon I'm in Ashley, North Dakota for a 9-man first round playoff game between the South Border Mustangs and the Grant County/Flasher Storm. Kickoff is set for 2pm CT/3pm ET. #43 @PaFootballNews #BeyondTheKeystone pic.twitter.com/ownpTkWLv9

The South Border Mustangs take their name from the Ashley Mustangs, and the field is adorned with South Border insignias. Grant County, the Coyotes, located in Elgin, co-op with Flasher, to form the Grant County/Flasher Storm. This, too, is a 9-man game. At least my third weekend seeing less than 11-man games exclusively.

The crowd was packed into the sideline space on the home side. The small rope holding back the throng of onlookers. Not much real estate to work with to photograph. As a few others were there as well. But the sun was out, and it was unseasonably warm in the mid 60s. The PA was incredibly loud.

And the only thing missing was a comeback by the home team. Trailing 16-8 after 1 wasn’t bad, but the third Grant County/Flasher TD seemed to send an ire through the fans. The boisterous crowd was growing cool and forelorn. The fourth touchdown seemed to set into the fans that this one wasn’t going to go their way.

But, South Border had the opportunity. A quick touchdown on a 39 yard pass late in the second quarter made it 32-14. The missed conversion weighing heavily on them. To open the second half, South Border opened like gangbusters. Driving down the field quickly, before a pick in the endzone squashed any hopes. And the entire second half went scoreless. 32-14, final.

Not the result I was hoping for. But, a beautiful, gorgeous day on a small field next to a small school in a small town like any other fall afternoon.

This was a work related trip. So, no gas, or hotel is counted. Just 881 miles of zipping around the upper plains. $100 exactly for food was the only expense for the three days. Including my favorite stop at Drake’s Place in Bowdle for burgers. 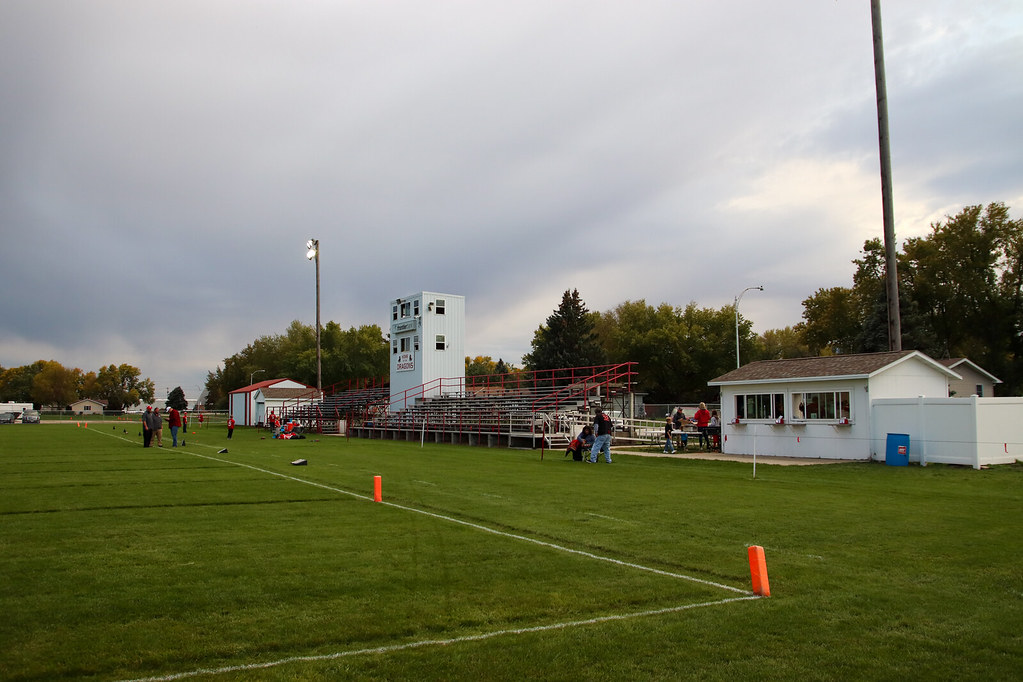 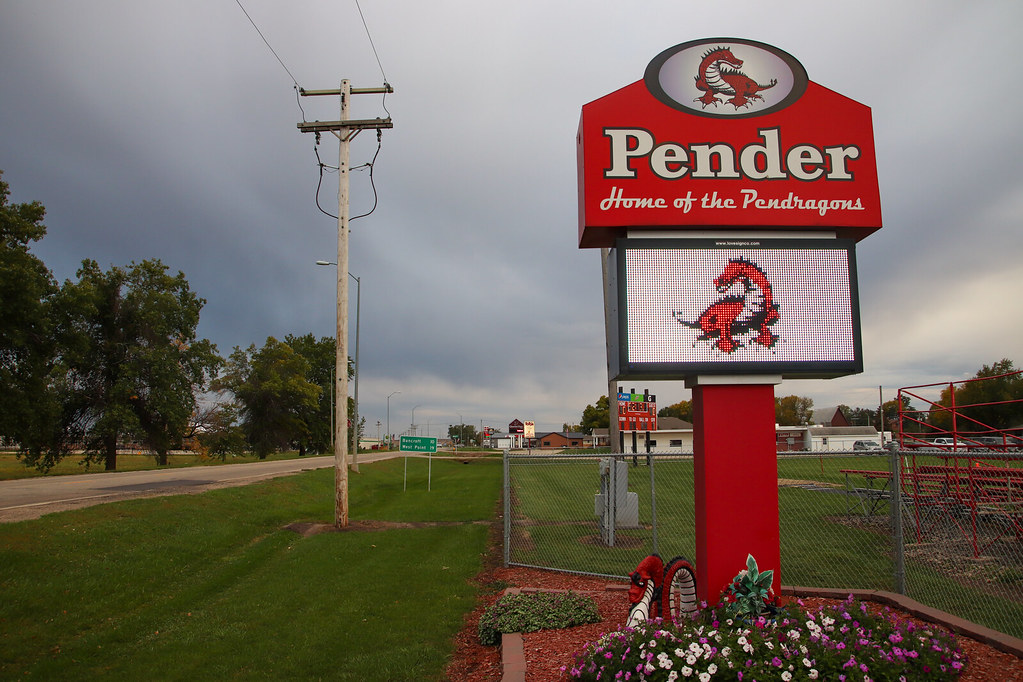 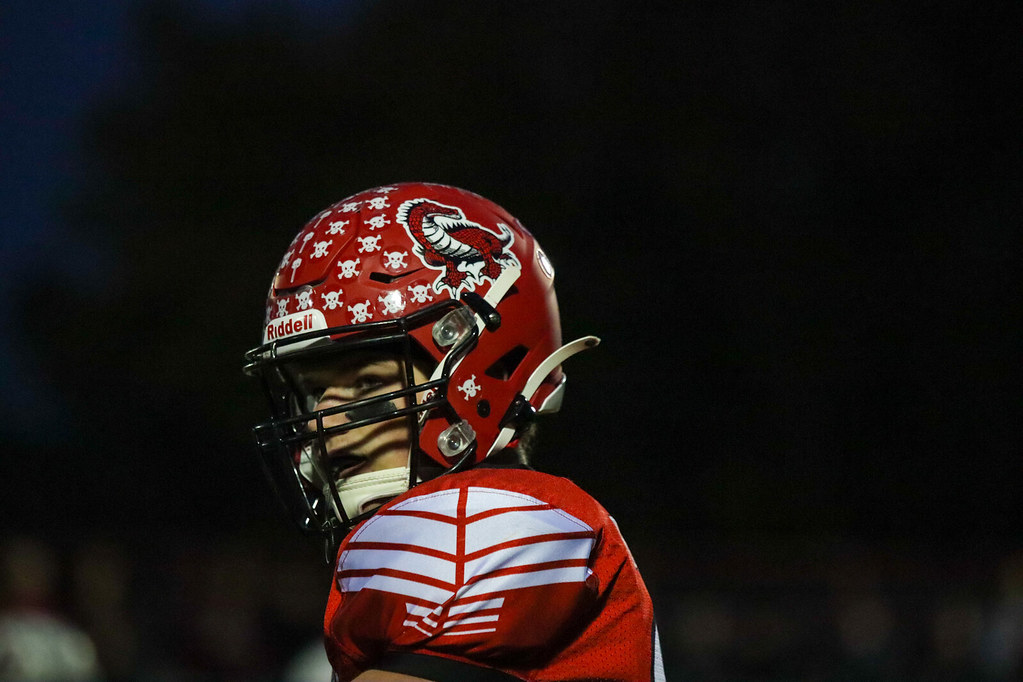 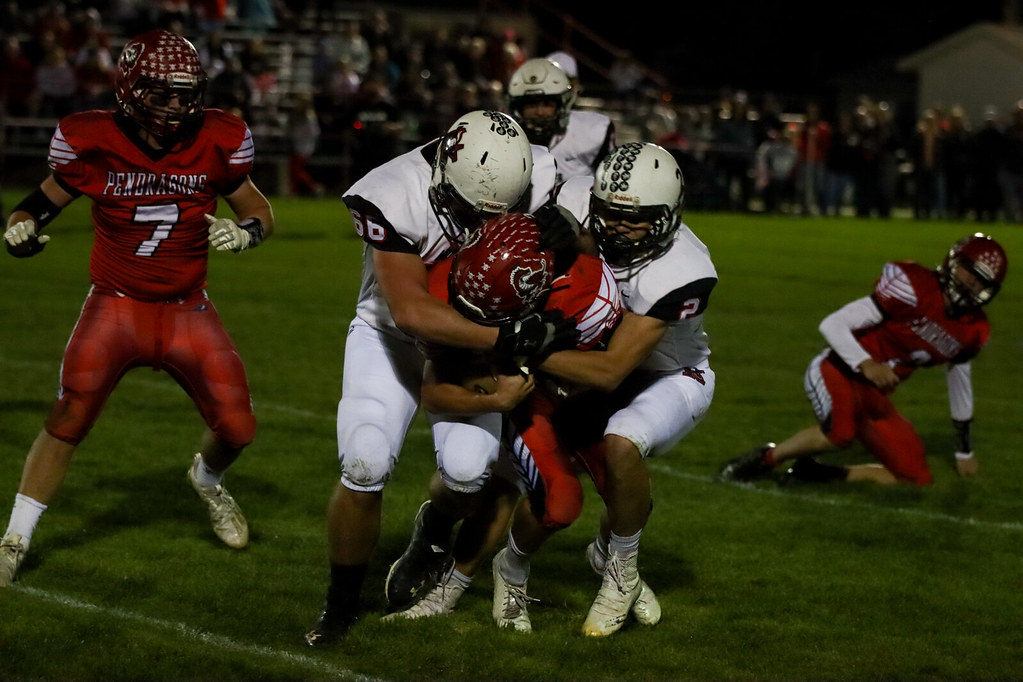 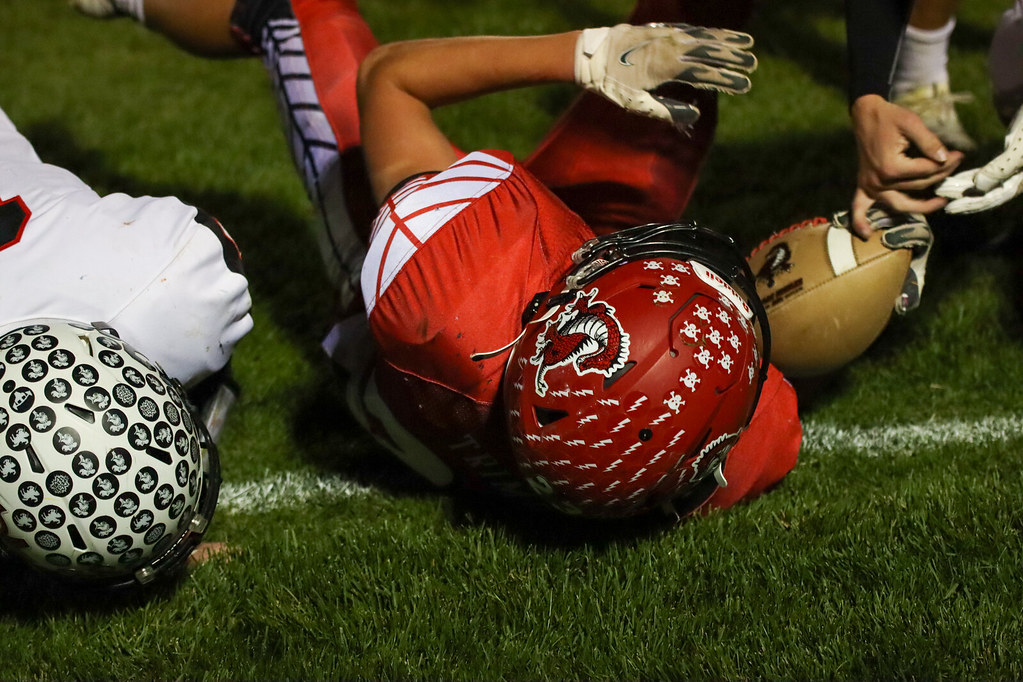 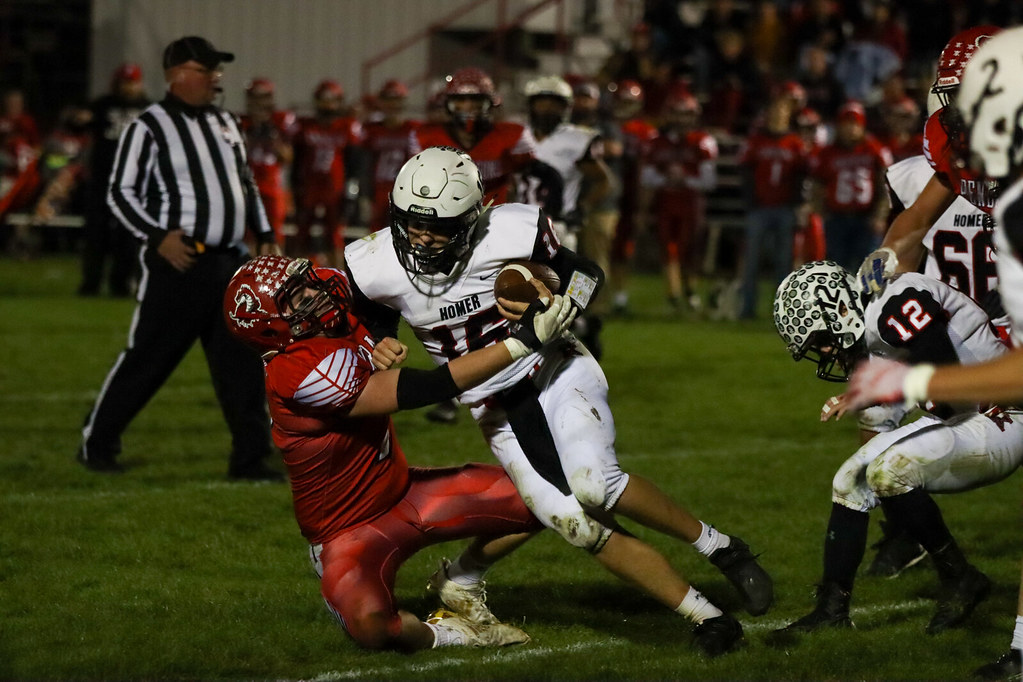 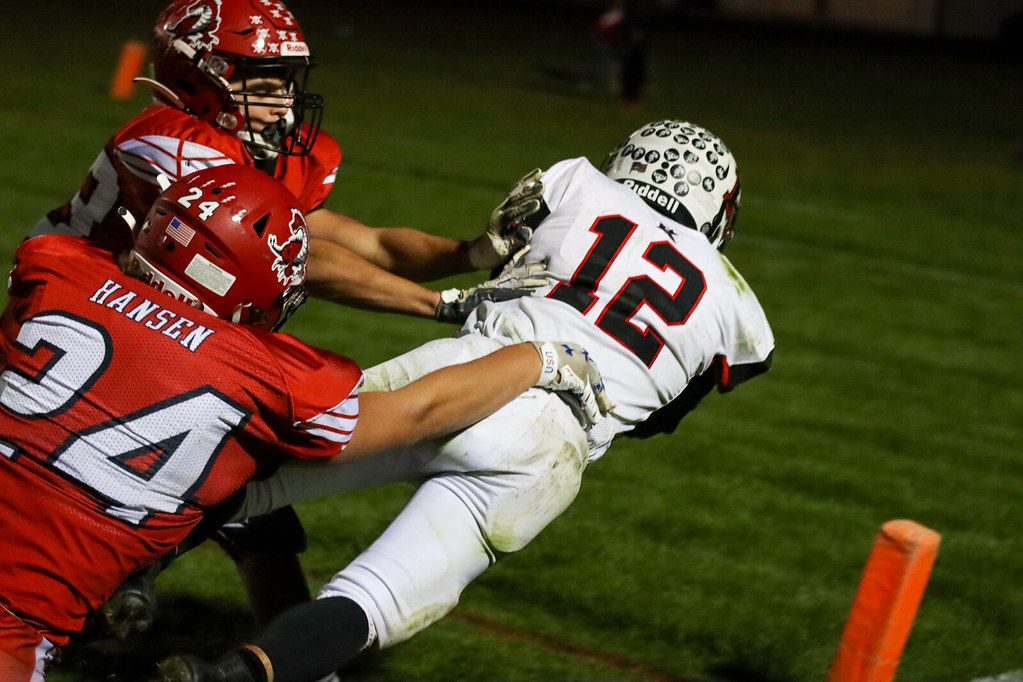 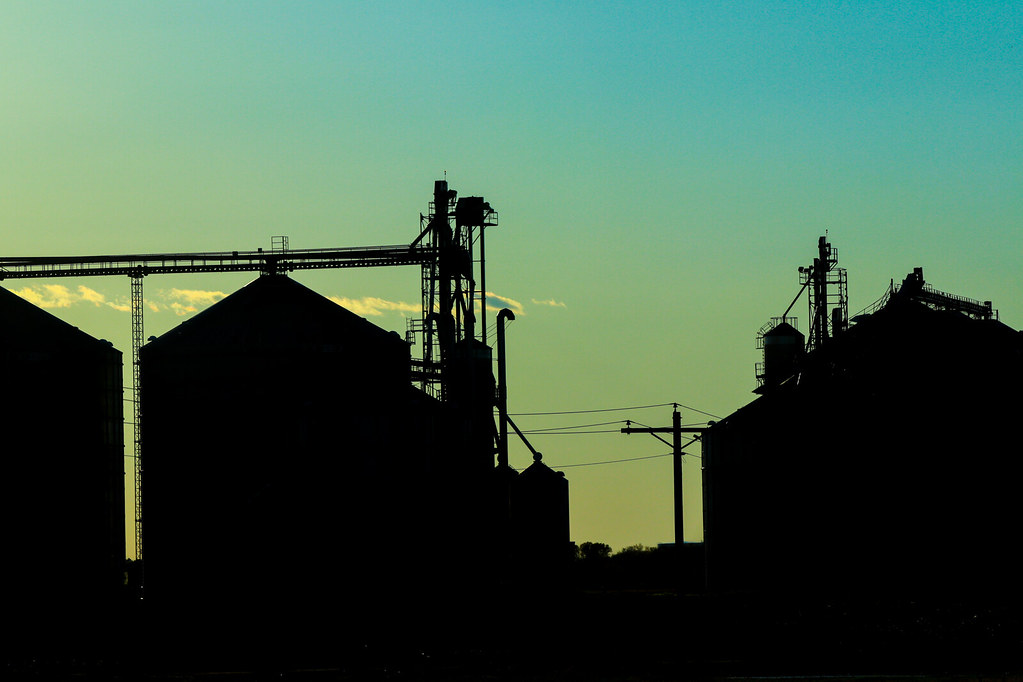 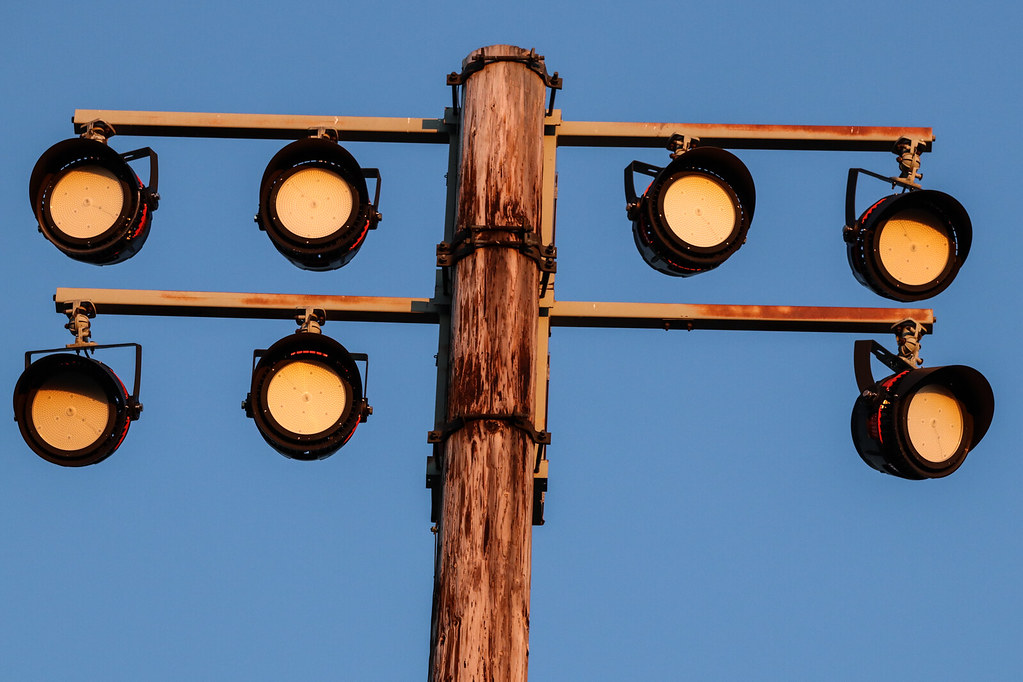 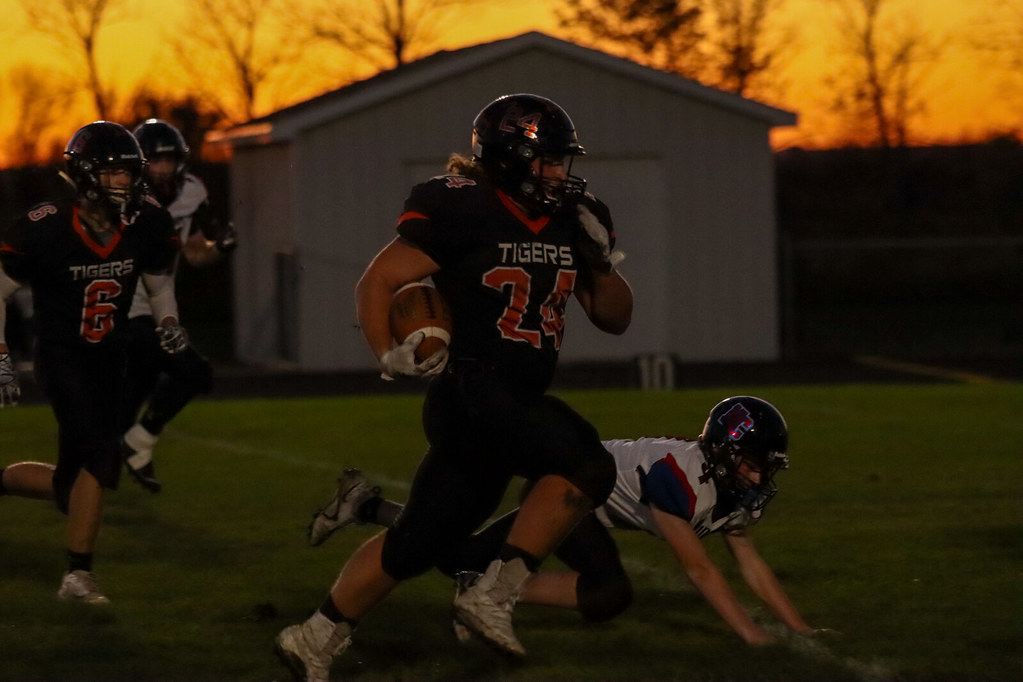 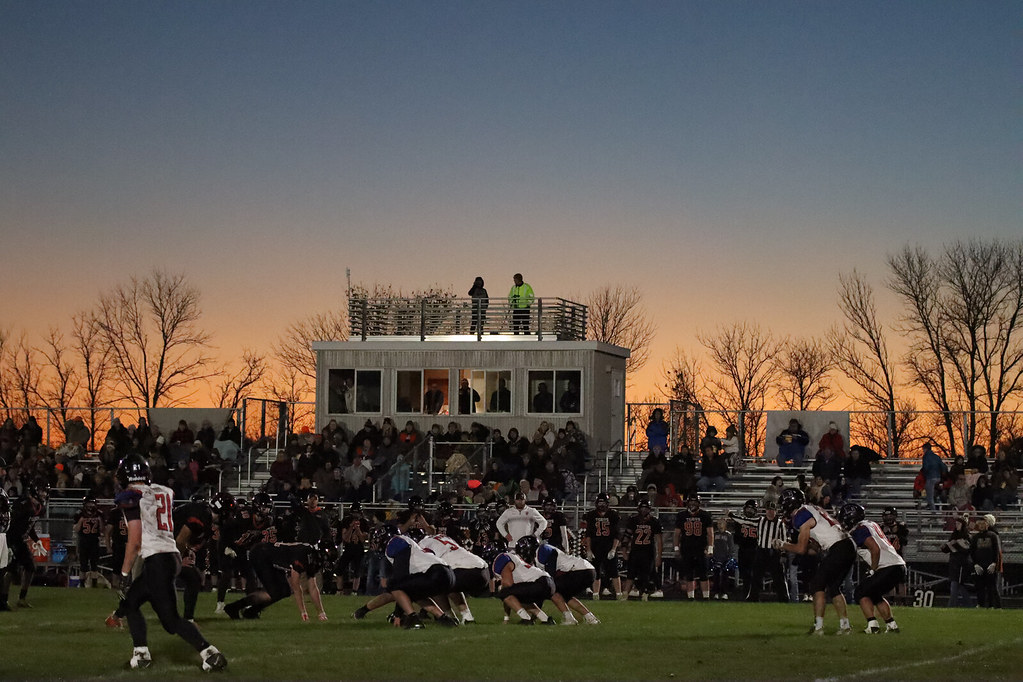 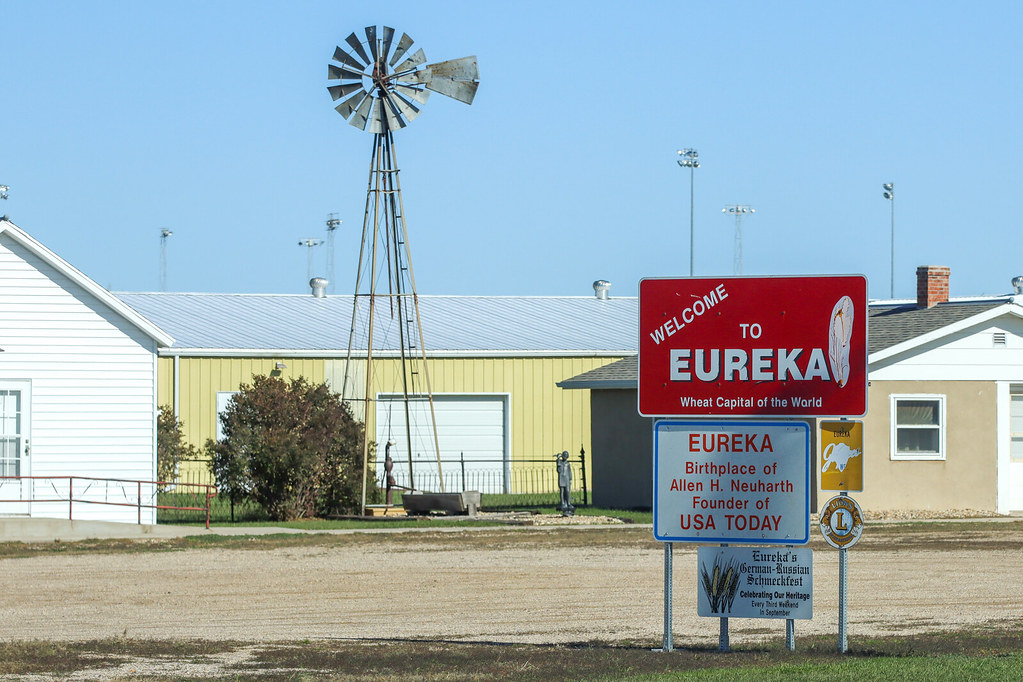 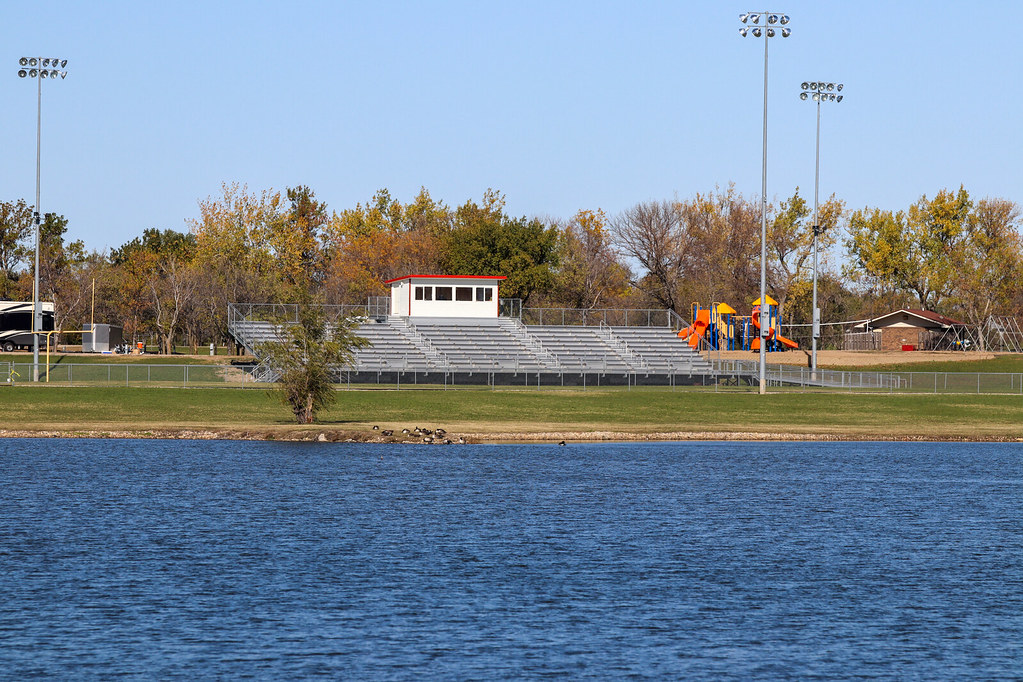 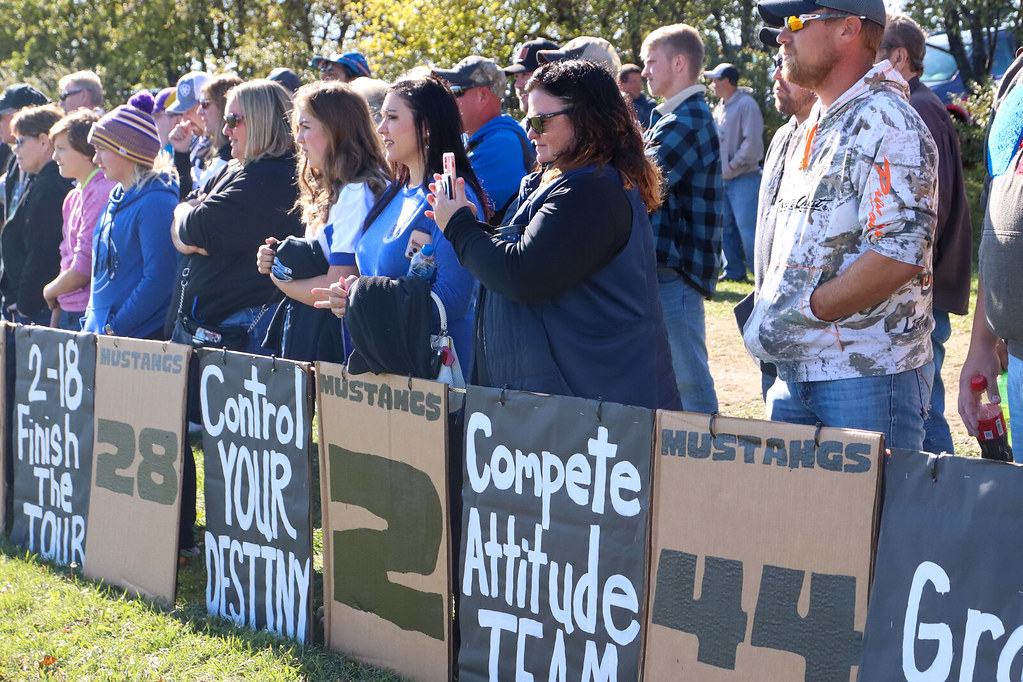 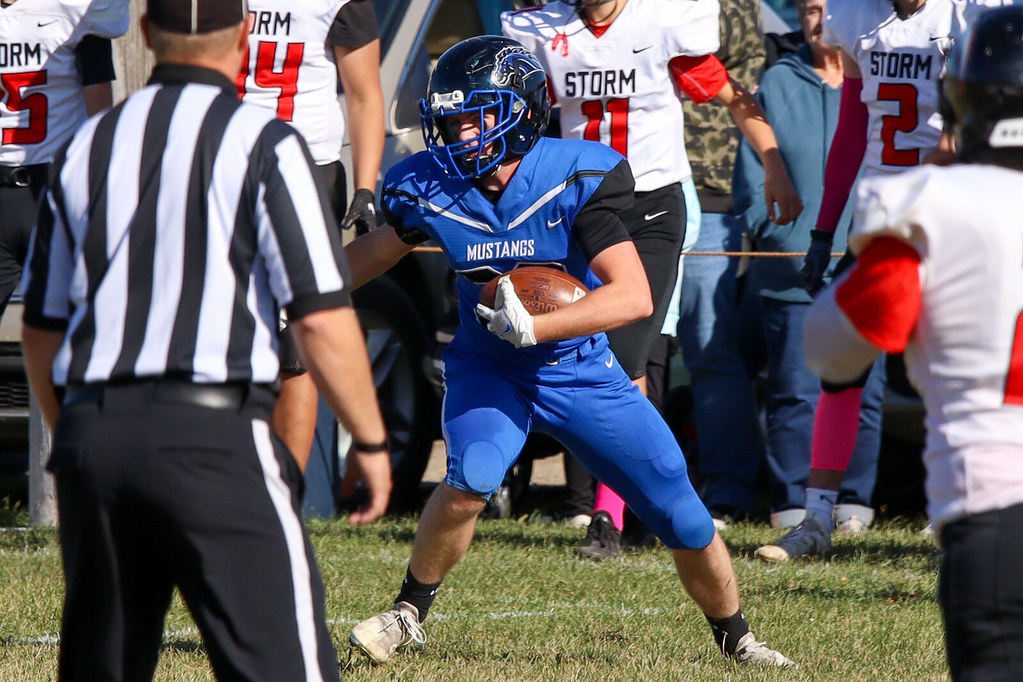 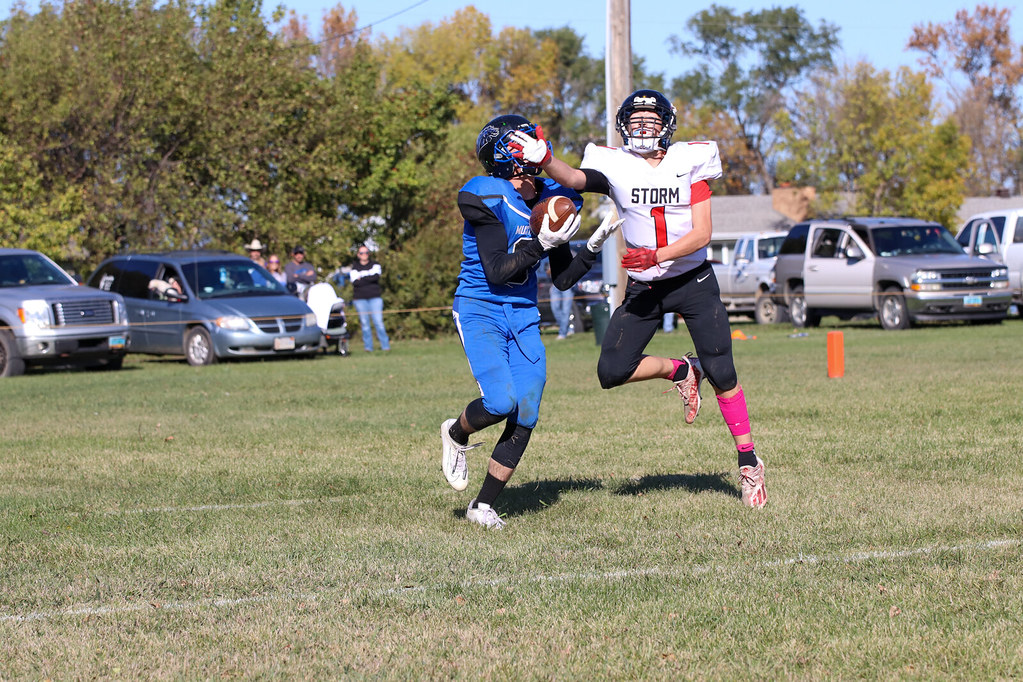 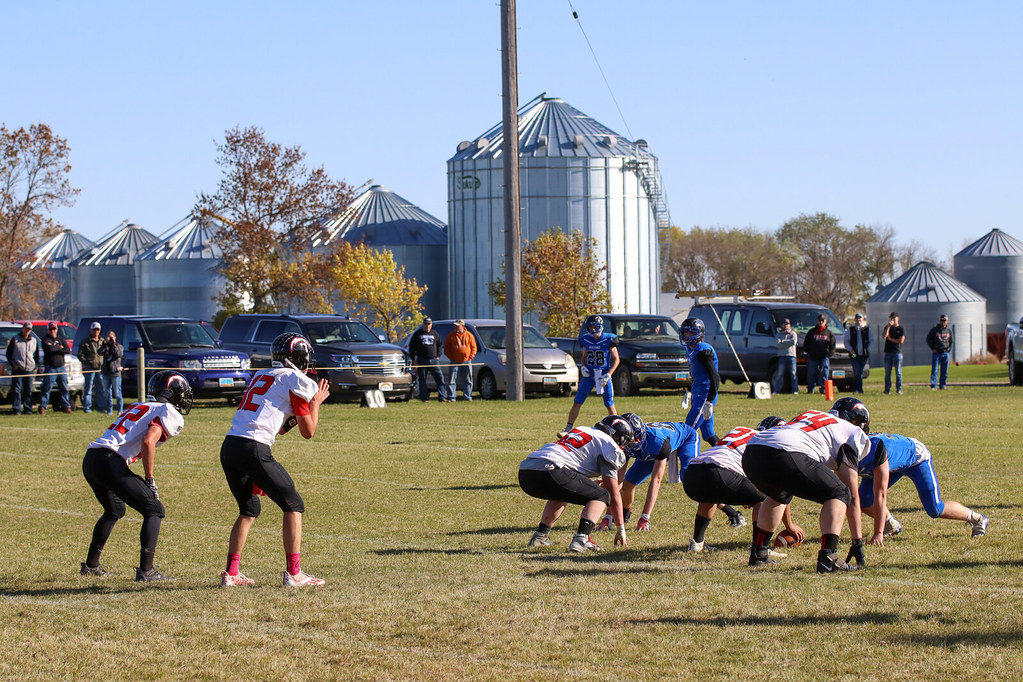 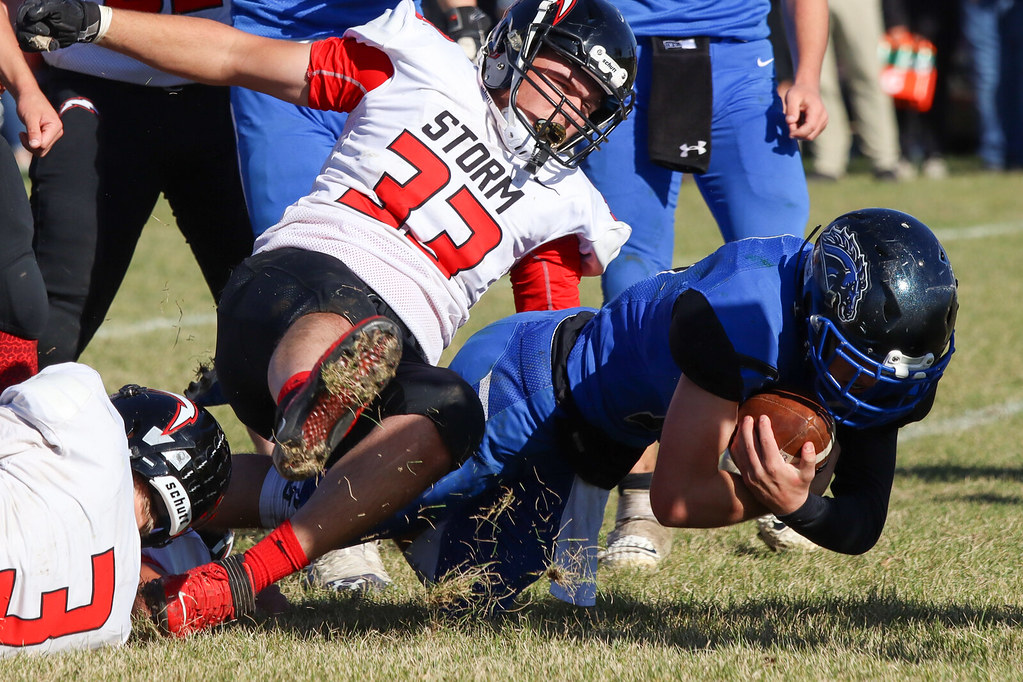 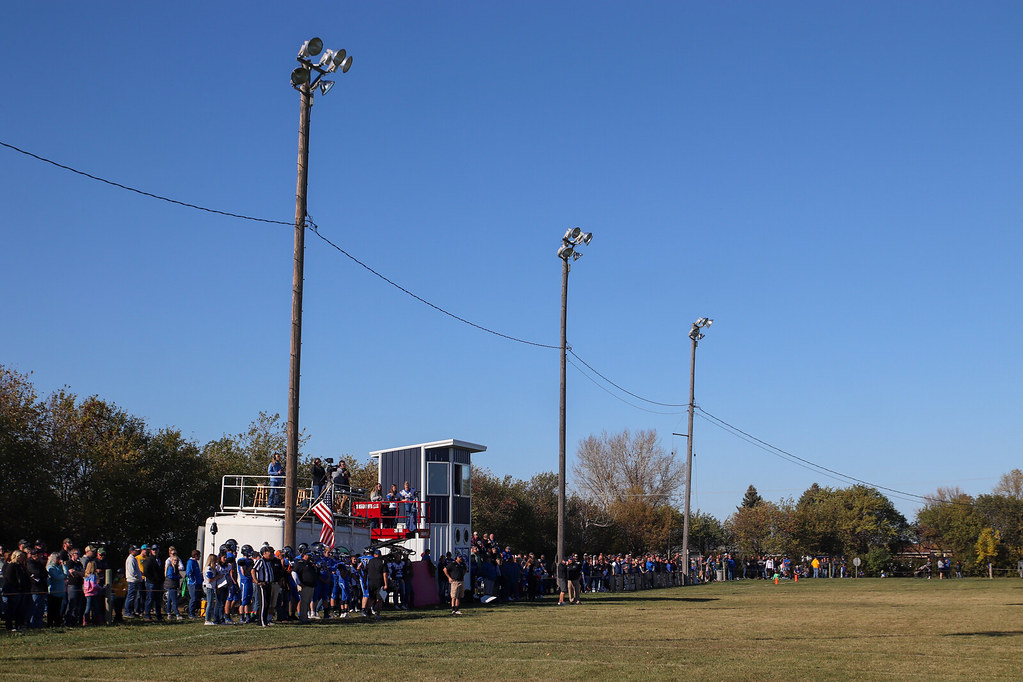 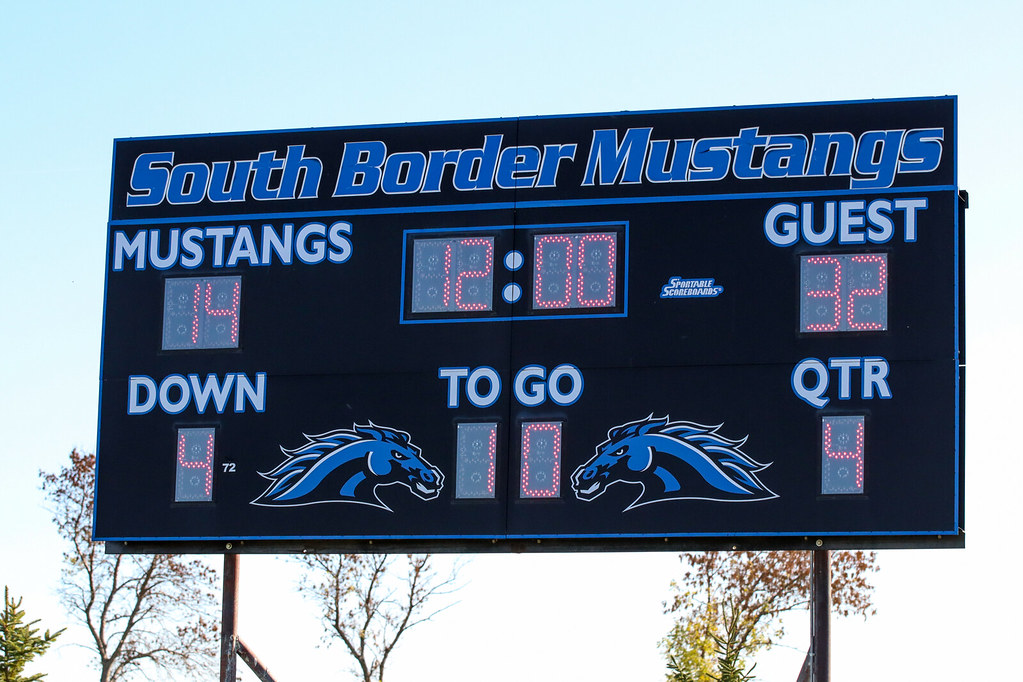 The next week, though already passed, was a bit of a surprise. So, I wasn’t going to announce it until I was 100 percent certain I was going.