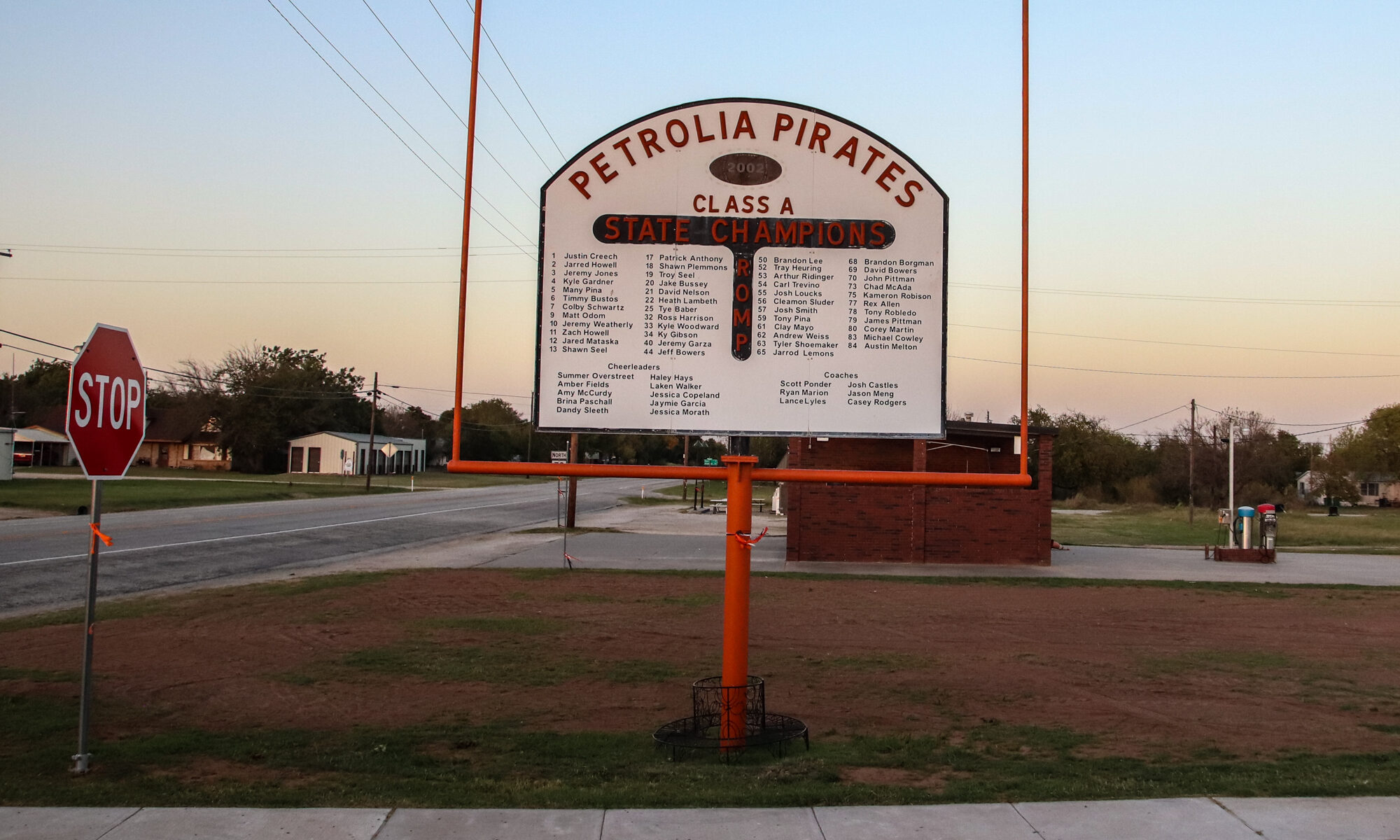 So, these are all going to be just a tad late. The Sunday after the Week 9 games, I was back in El Paso, Texas and my back was just not having a good time. My next stop was near Lubbock. And I managed through the week and on Thursday afternoon, was looking for any game. I had planned to be in Dodge City for the Six-Man Championships of Kansas, dubbed the Wild West Bowl, but other than that, hadn’t thought about this weekend too much in advance.

Looking around, the closest game I had found was Amarillo hosting Lubbock. Both the original schools, which would’ve been noteworthy. However, it was projected to be entirely one-sided. And then, next was Follett.

By this point, I had planned for Friday to be in Oklahoma. I had only ever seen one game in Oklahoma. And with my Saturday plans in Kansas, figured it’d be smart to find something along the way. Which led me to Follett, a small blip on the Texas panhandle border. They were playing a six-man game against Miami (pronounced My-Eh-Mah). Which was going to be over at halftime. It was also, at this late time, quite a drive.

My updated preliminary plans for Week 10:

So, I started just west of Lubbock near New Mexico, and had found my game. A game I didn’t even know was on Thursday: Petrolia v. Windthorst.

It was still going to be about the same drive. But, this was going due east. East of Wichita Falls. And a long distance from Dodge City. So, a lot more time driving. Which my back didn’t really enjoy.

Normally, I would just take a few days, lay in bed and I’d be good to go. But, this wasn’t one of those times. So, I struggled through it. And arrived in Petrolia about 15 minutes before kickoff. At the wrong stadium.

One of my favorite little towns in Texas: Petrolia. I will see them play one day. #roadtrippin pic.twitter.com/59CVRLpyBS

See, I’ve been in Petrolia before. and driven by the stadium several times. And I had no idea that they didn’t play there any longer. Instead, a new school was built a few miles north of town and had a new stadium. So, after arriving and seeing absolutely no one at the school, I started to question whether the AD had gotten the date wrong when I called to confirm the Thursday kickoff.

Tonight I'm in Petrolia, Texas for a match-up between the undefeated Petrolia Pirates and the one-loss Windthorst Trojans at Pirates Stadium. Kickoff is at 7pm local. #48 @PaFootballNews #BeyondTheKeystone @TXHSFB @txredzonereport pic.twitter.com/JEqSYt3B5K

After stopping at the sign in town, and the wrong school, I made my way to the correct school and got onto the field just after kickoff. This was my second time seeing Windthorst, who won the state title over Mart last December at AT&T Stadium.

But, my first time seeing Petrolia. Shooting for Texas Redzone Report, I had a good time at the game. But sometimes games just don’t live up to the hype you build up in your head. And this was one of those times. Primarily I wasn’t thinking I’d be at a aluminum and turf cookie-cutter stadiums miles from town surrounded by trees and nothing, instead of the concrete and grass stadium on the edge of town behind the old school.

Petrolia would stay slightly ahead, 7-6 and 14-12 during the first half, but Windthorst would take control the second half, and take the lead, 19-14, and 26-14. After that, the Petrolia Pirates worked their way for another touchdown to make it close in the 3rd. But three fourth quarter touchdowns obliterated any home of an upset by the home squad. Windthorst 45, Petrolia 21.

The second game of the weekend had been decided when I a) was going to Dodge City Saturday, and b) had decided on Oklahoma for Friday. A small town on US54, Hooker, was hosting Mooreland.

However, going to Petrolia had added 280 extra miles to my Friday instead of going to Follett. However, Follett had won, 64-0 in just 20 minutes of game time.

So, heading up to Hooker was still worth it.

I killed time and made it to Woodward, Oklahoma after the game. Putting me not too far from Hooker. And let me stop by one of the funniest signs I’ve come across:

Tonight I'll be in Hooker, Oklahoma. My second game in a town on this infamous sign. The Hooker Bulldogs host the Mooreland Bearcats. Kickoff set for 7pm CT. #49 @PaFootballNews #BeyondTheKeystone pic.twitter.com/q1xFHMuS3R

Back in 2019, I had seen a game in Liberal. And I’m sure some day I’ll see a game in Buffalo. But, for this night, I was hanging a left to Hooker.

I got into town well before the game, and made me way through the dirt streets west of town to the athletic complex. This was also my first game on the panhandle.

Now, at the time, any team along the panhandle would’ve been worth stopping at for a game. But how could you pass up Hooker? It’s named after John “Hooker” Threlkeld. But that’s not why it’s well-known. I don’t know if Hooker or Accident were the most interesting town name I’ve seen a game in. But it’s in the mix.

The crowd for Hooker was quite lively and large. Mooreland, though, had such a small crowd. They are 133 miles away. So, that’s not too surprising.

Hooker started with a single quick score in the first frame. Though Mooreland did take a brief lead in the second quarter, 8-6. But it was all Hooker after that. A 20-8 halftime lead, and two second half touchdowns salted it away. Hooker would win 34-8.

As for the game and stadium, this was a fun place to see a game. It was quite bright for a grass field, but the home side wore some of the darkest uniforms. And though the color correction helped, they seemed much darker in person. The all black uniforms with dark blue numbers were a difficult look to capture properly.

Being quite close to Kansas now, the trip to Dodge City was a simple one. When I called about the game, I had just known of the championship game at 7pm. But, had found out there was a third-place game at 4pm. So, of course, I had to add that to my itinerary. On Saturday, it was a 100 mile drive up US83 through Liberal to Dodge City. Memorial Stadium is located on the northwest side of town. The home stadium of the city’s public high school, the Dodge City Red Demons.

The Wild West Bowl is an interesting concept in ‘making do’. In Kansas, the state has not yet sanctioned 6-man football. There is 8-man football. In fact, it has two divisions of it. However, there’s 15 schools that have since determined that wasn’t appropriate for them. They needed six-man. And without the state stepping in to run things, have done it on their own. 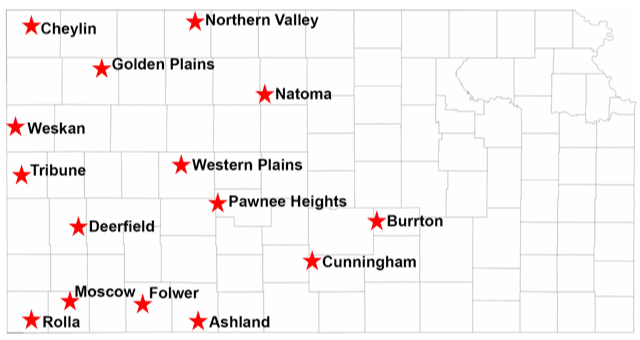 And for them, their playoffs culminate with the Wild West Bowl in the state’s western half in Dodge City. However, the state association has now included them into the fold going forward. And this may be the last of the Wild West Bowls. Only time will tell of the future of the six-man playoffs in the Sunflower State.

The third-place game started like the first two games of the weekend. A solitary score in the first quarter. But then it broke open. Northern Valley would flirt with the lead, while Ashland would answer each score. Taking a one point-lead at halftime. The back-and-forth continued through the second half as they’d be tied, 32-32 in the fourth. Ashland would take a 39-32 lead with 1:05 left. A two yard run and a conversion on the ground. In the six-man game only being worth one. Where kicks are worth two.

In the six-man game here, there are no temporary goal posts. The officials will simply move the pylons out of the endzone and place the ball at the 100-yard field’s 3 yard line to attempt kicks. Then moving the pylons back to the middle of the endzone to signify the 10-yard line as the 6-man endzone goal line.

Northern Valley would jump quickly at the chance, and score on a 53-yard touchdown run. Trailing 39-38, they went to for the win. Or, rather, the lead. With 39 seconds left the kick was no good. And that single point would be the different. Ashland would hold on to win, 39-38.

Between games, there was a special introduction for the six-man all-stars from Kansas. Also, including a touching moment as Cheylin’s John Serrano was remembered postumously. He had died the previous Saturday and his funeral was the morning of these games. He was 17 and had just finished his season with the Cheylin Cougars football team. I took a break and went under the stands to the concessions. Got something to drink and then sat in the stands. And watched the warm-ups of the night game. Between the expected victory Cunningham Wildcats and the underdog Natoma Tigers.

This game looked like it was going to be the fourth straight for me with a single score in the first quarter. Until Cunningham’s Lane Halderson went 36 yards for a TD with no time remaining to tie it, 6-6. After that, Natoma was slowly pulling away. Starting with Derek George running the rock for Natoma. However, the second half was the Kayden Martinez Show.

Martinez would get touchdowns from 42 and 35 yards on the ground, recovers an onside kick, and then goes 27 yards for a score on the next play. With the score getting out of hand in the third quarter, it was only a matter of time.

In Kansas, the 45-point rule applies for all 8-man games, and the 6-Man Association that runs the extemporaneous playoffs for six-man mimics that rule. Though the 45 point rule is ingrained in 6-man from Texas. That being a team leading by 45 after halftime ends the game. And with six-man, games can get lopsided quickly. Such as this game.

Derek George would score the winning points on a 5 yard run with only 37 seconds left in the third quarter. Natoma would upset Cunningham, 60-12.

After that, there wasn’t much left for my weekend. I planned to be in Ohio for the next weekend. And things went awry. But I had bigger plans to tend to. 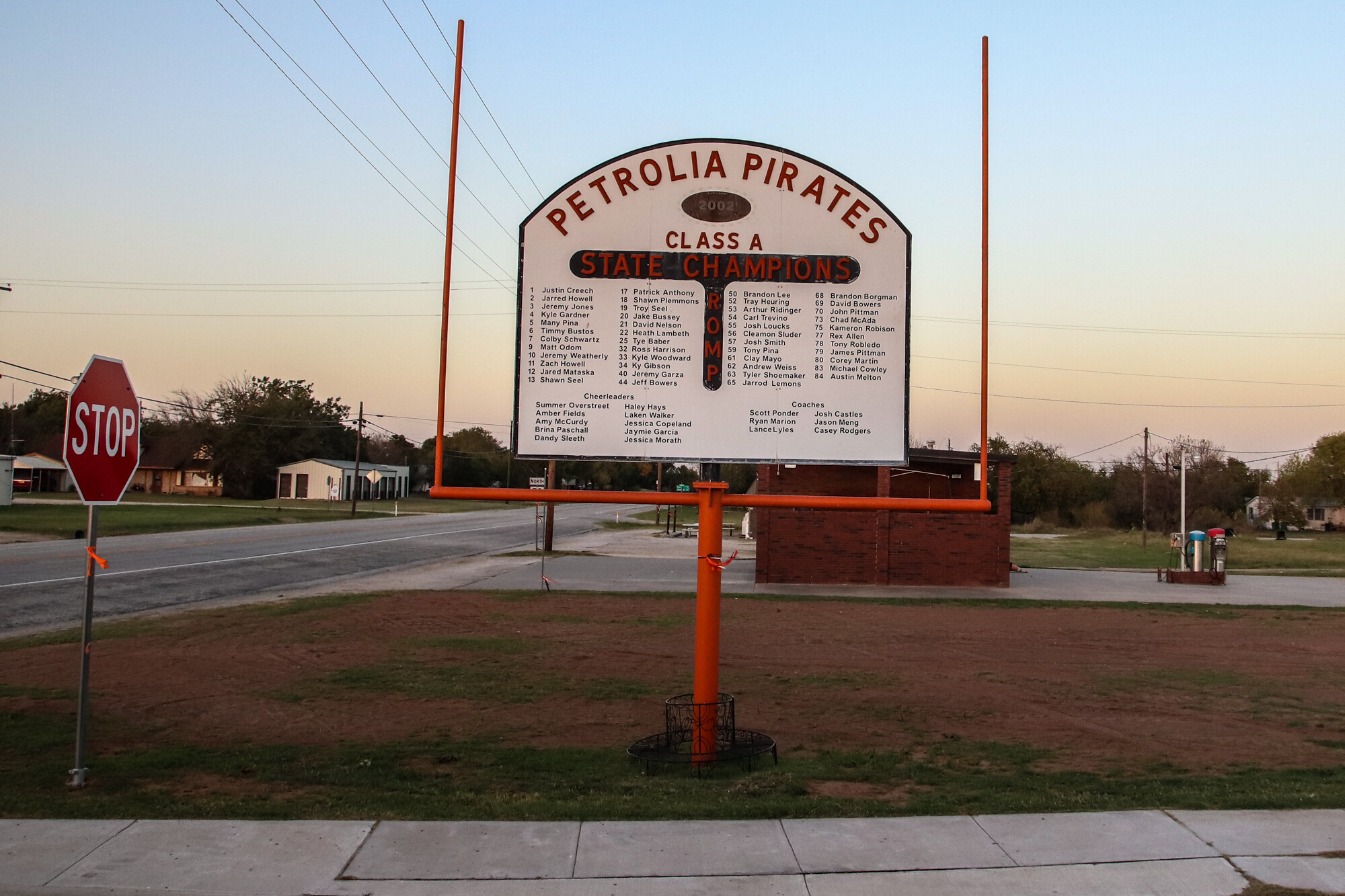 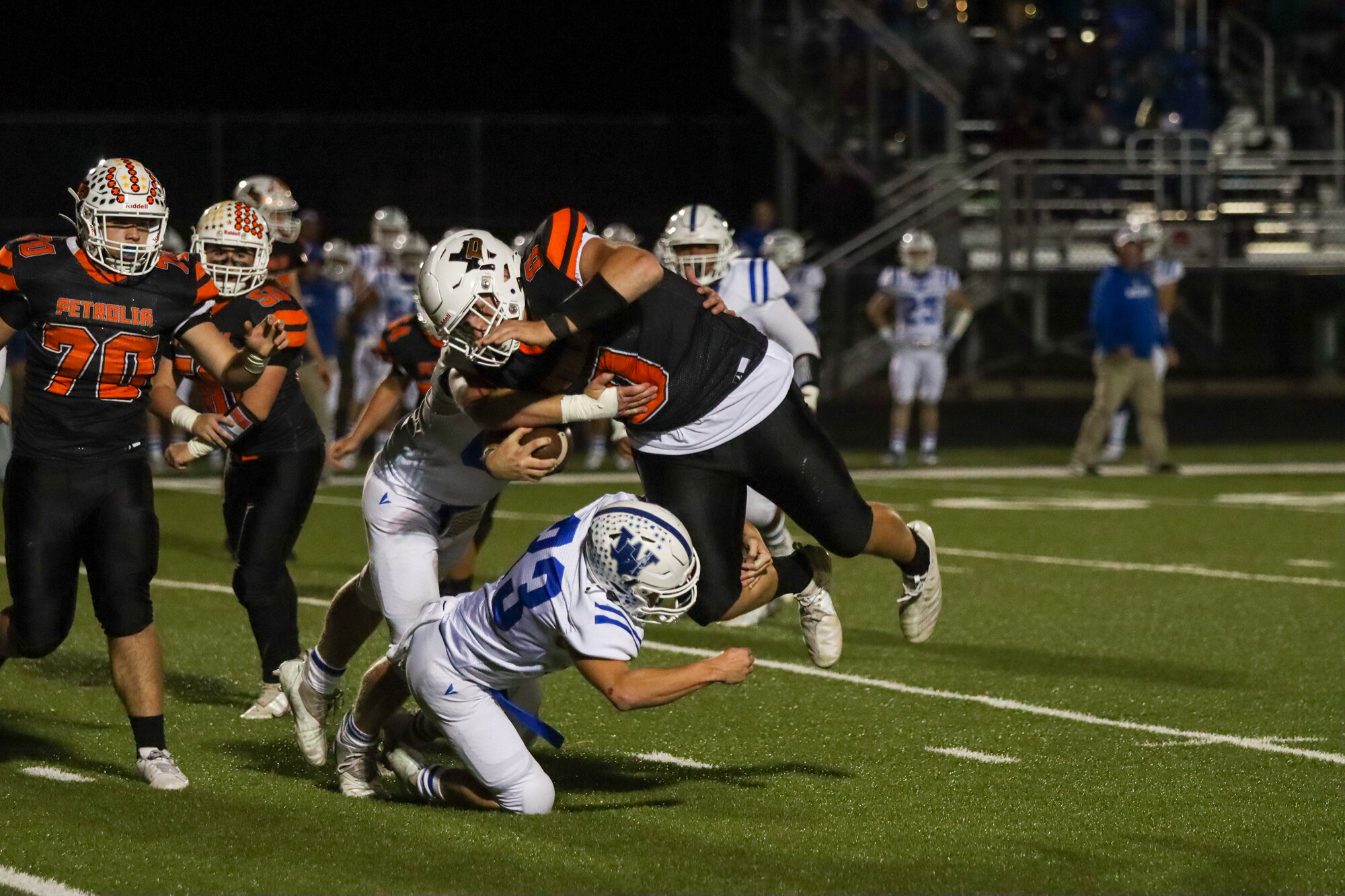 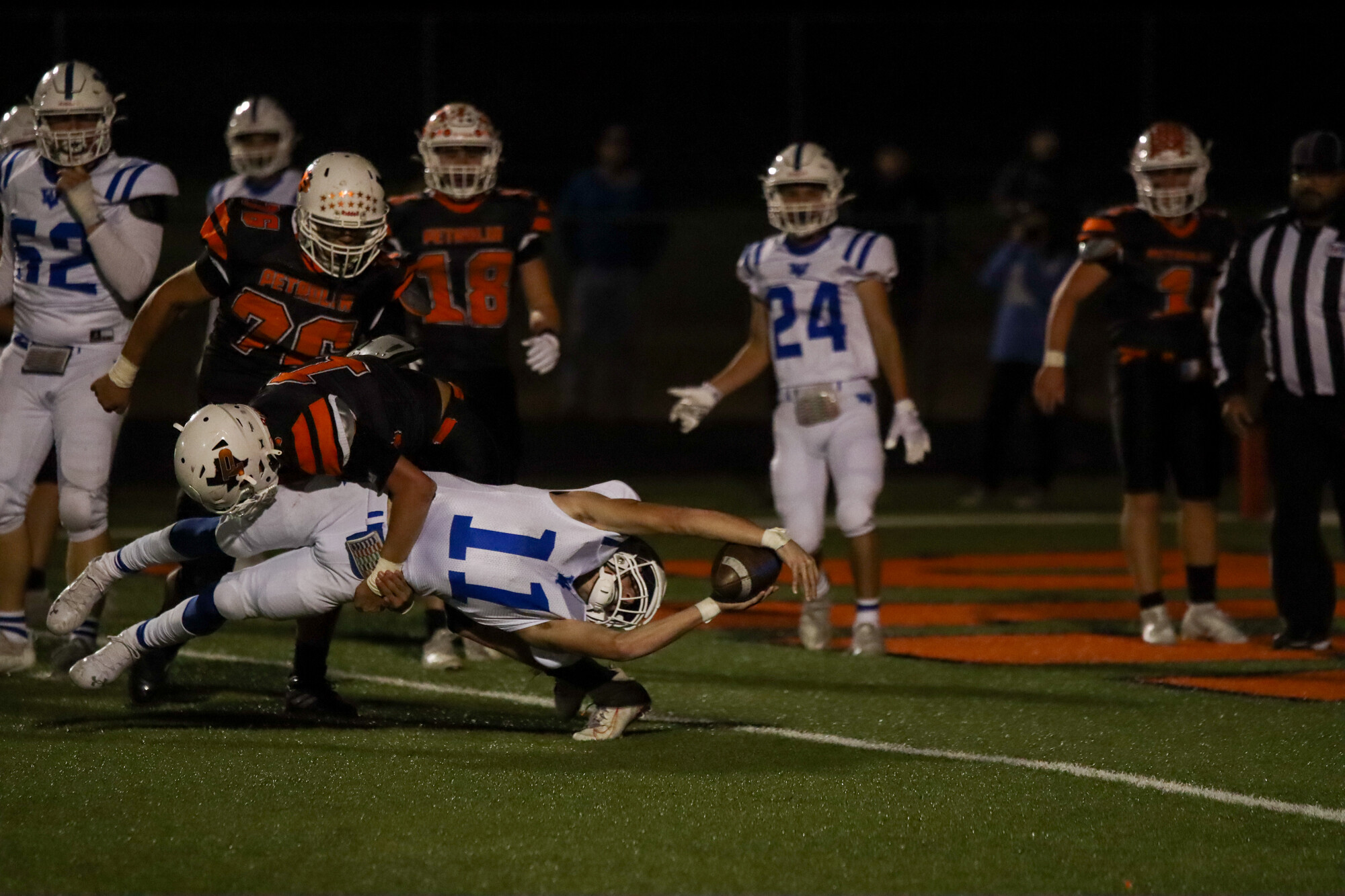 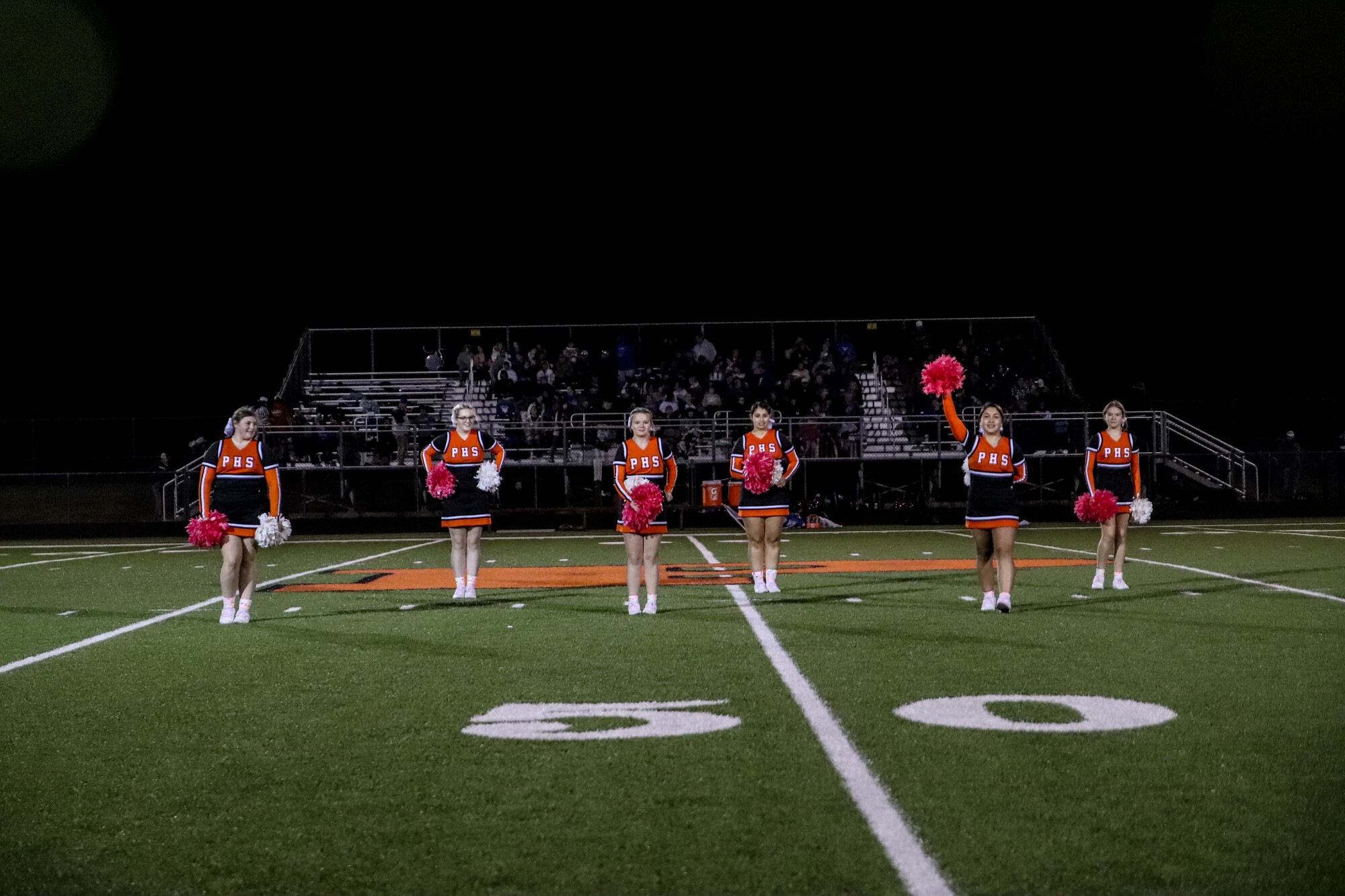 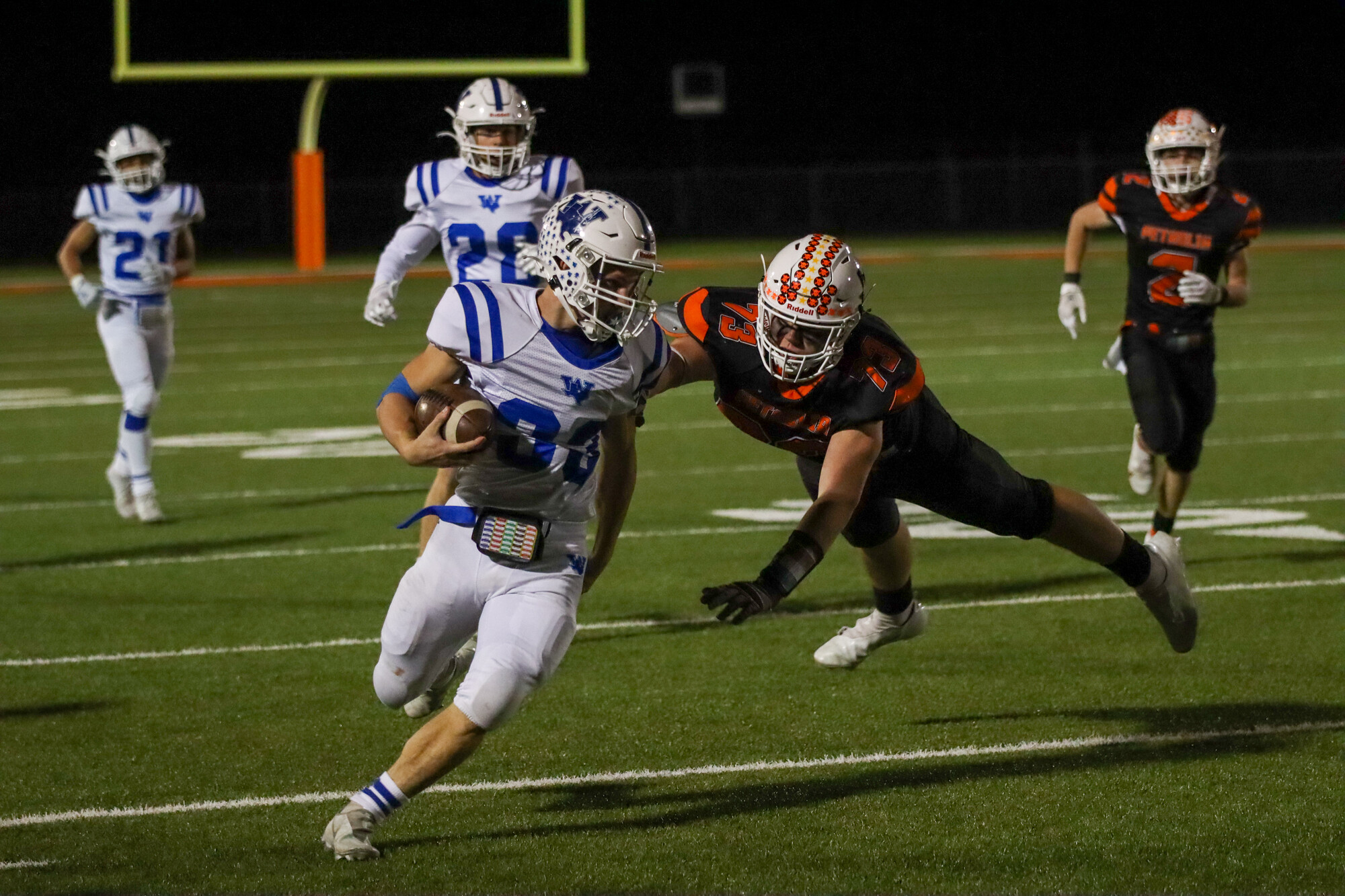 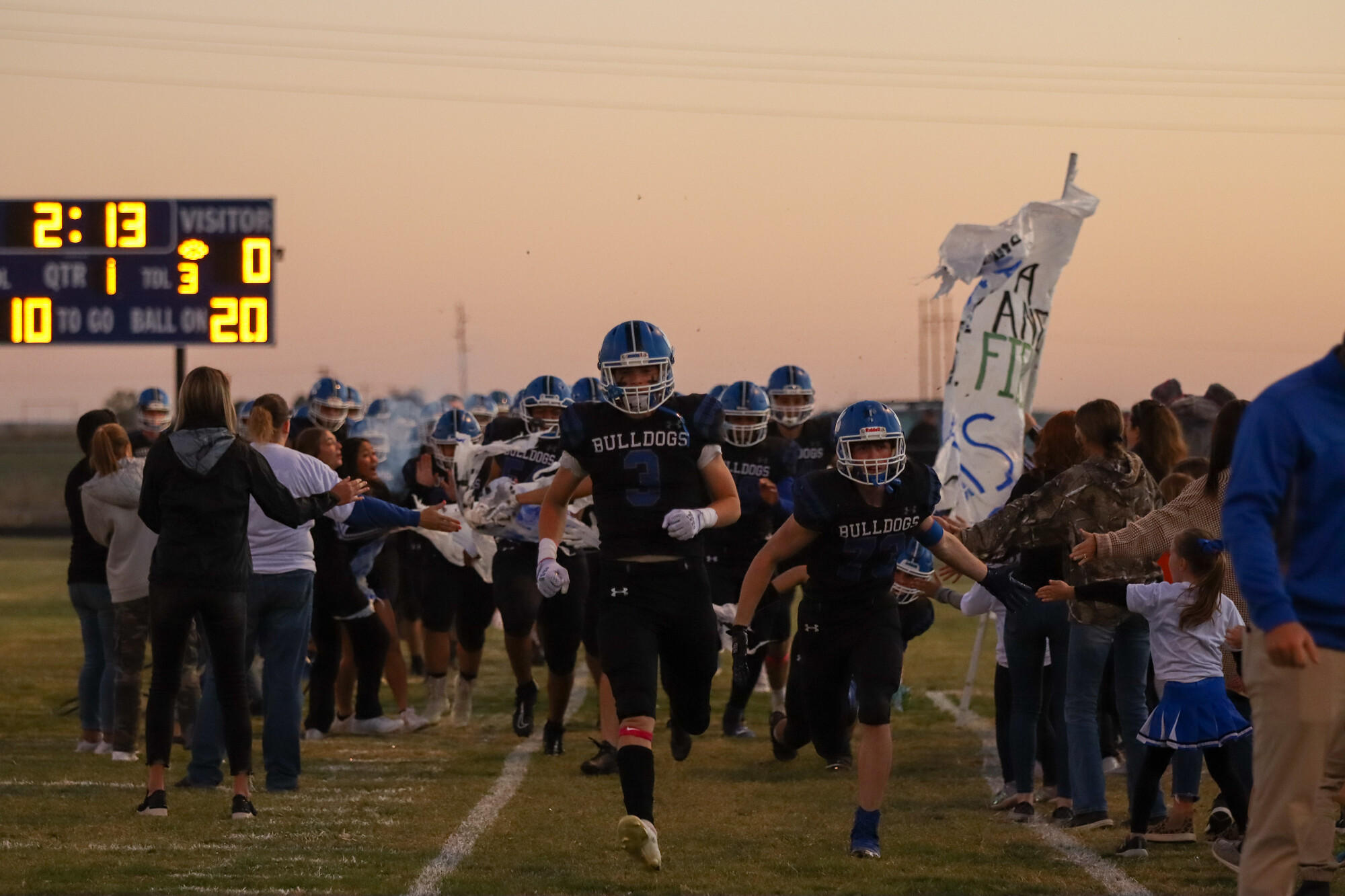 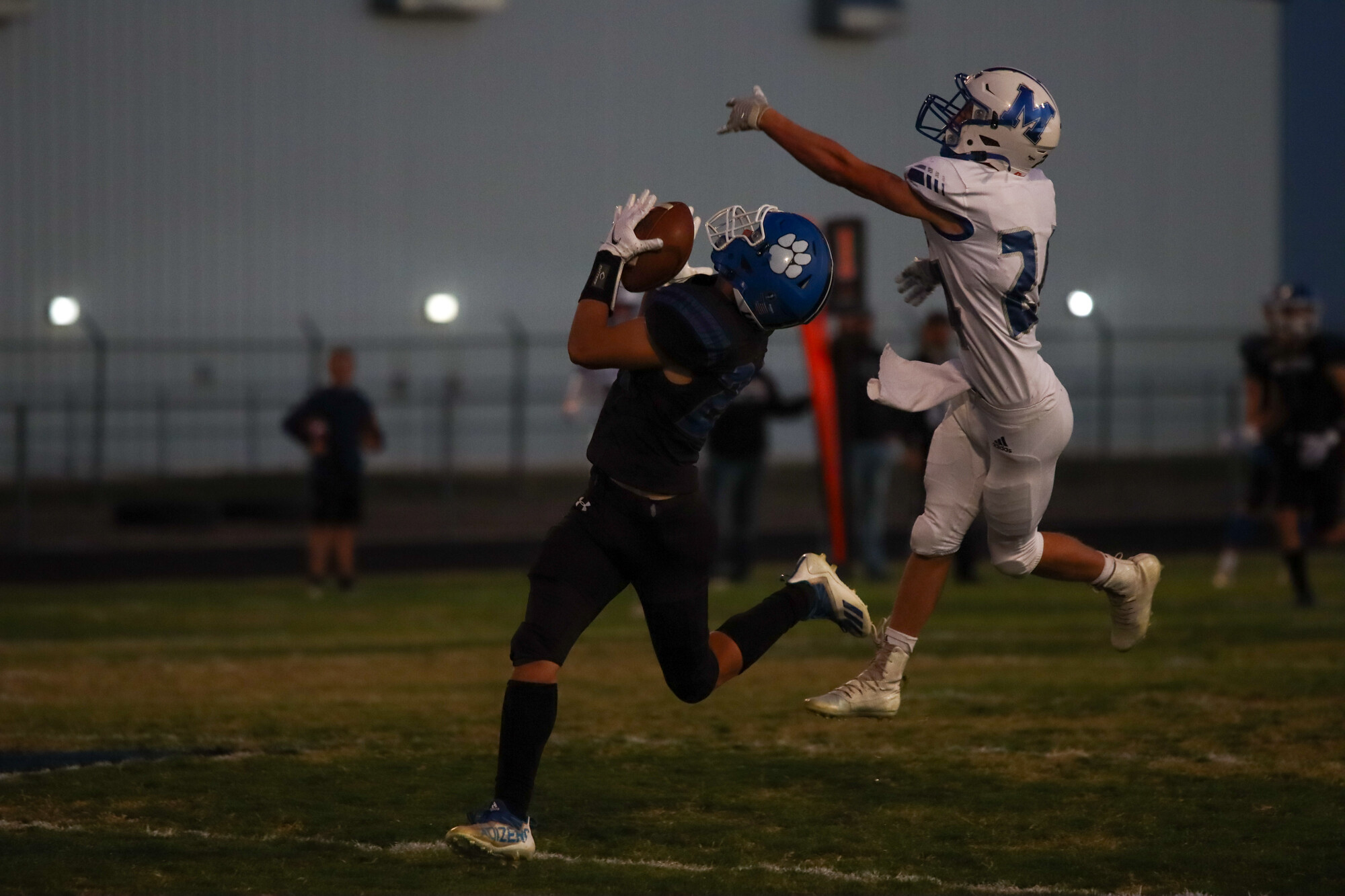 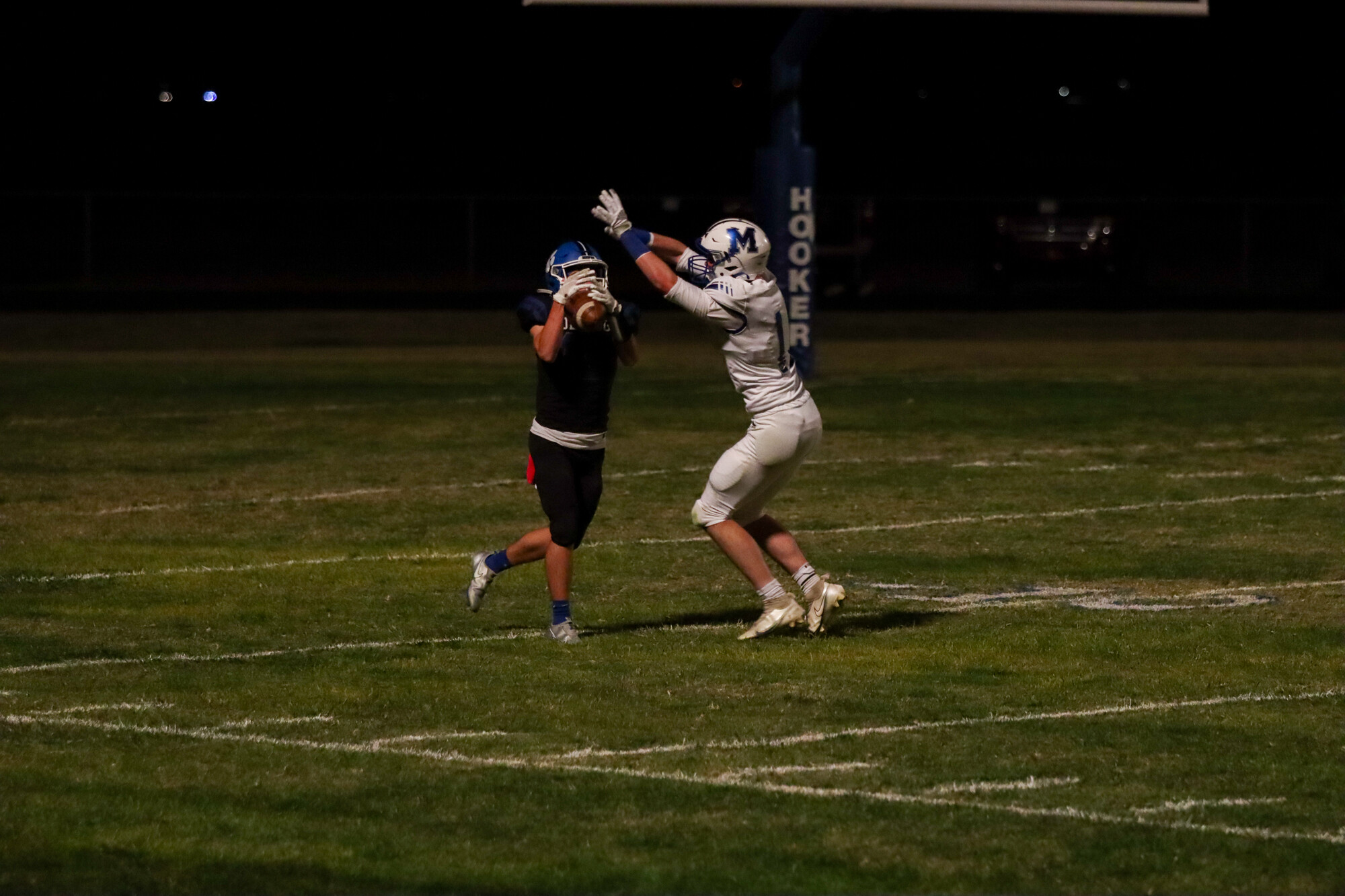 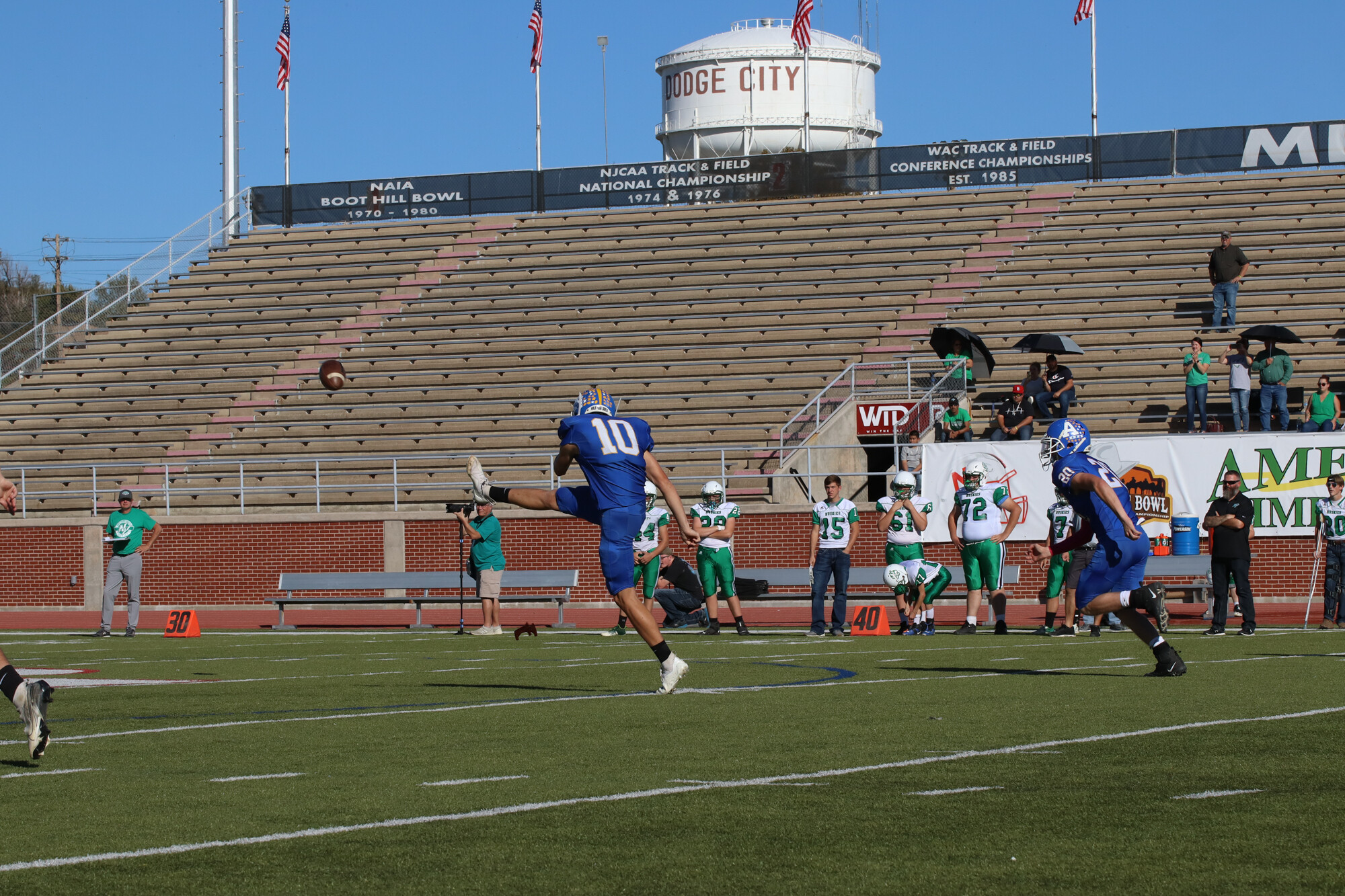 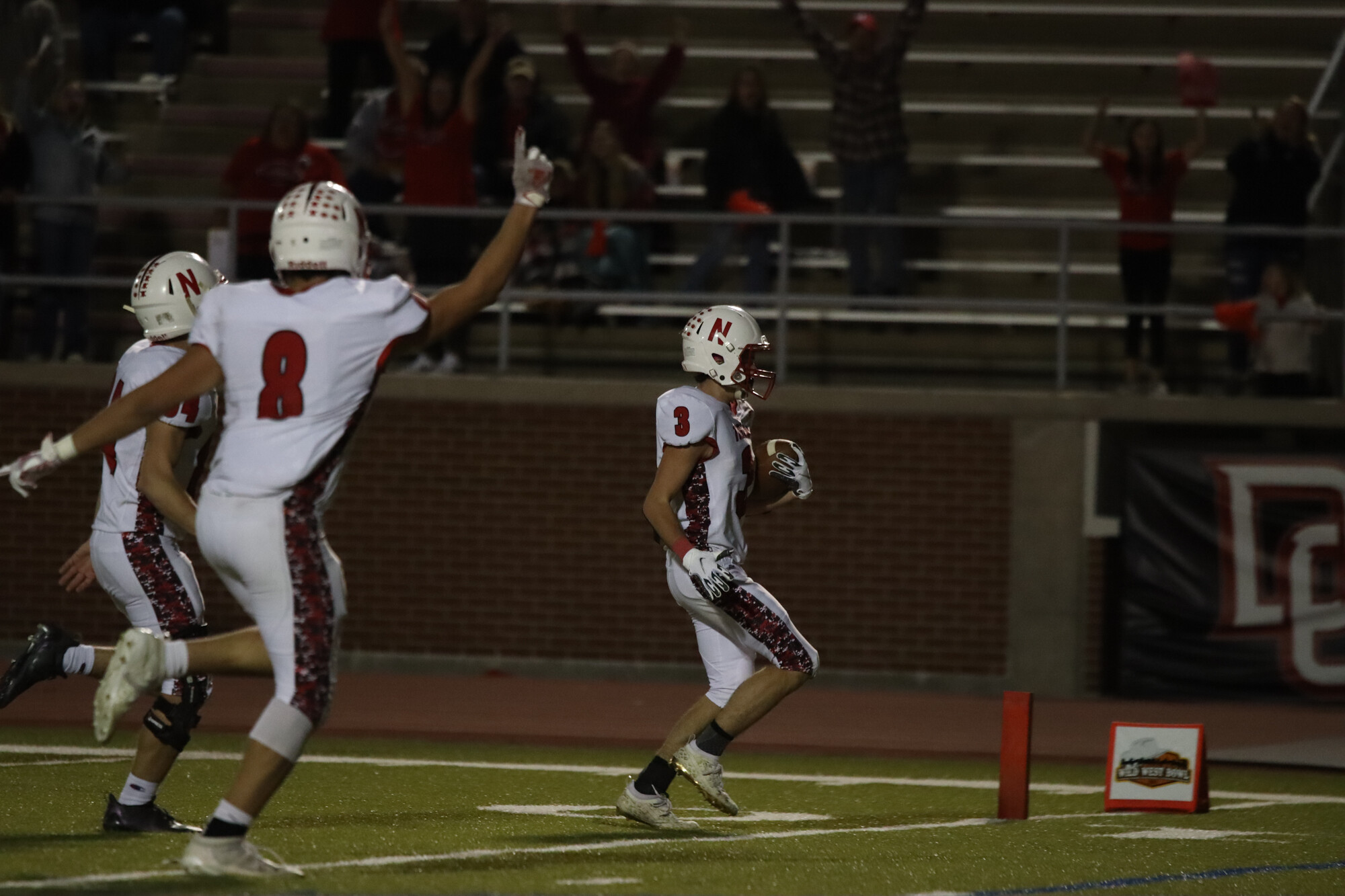 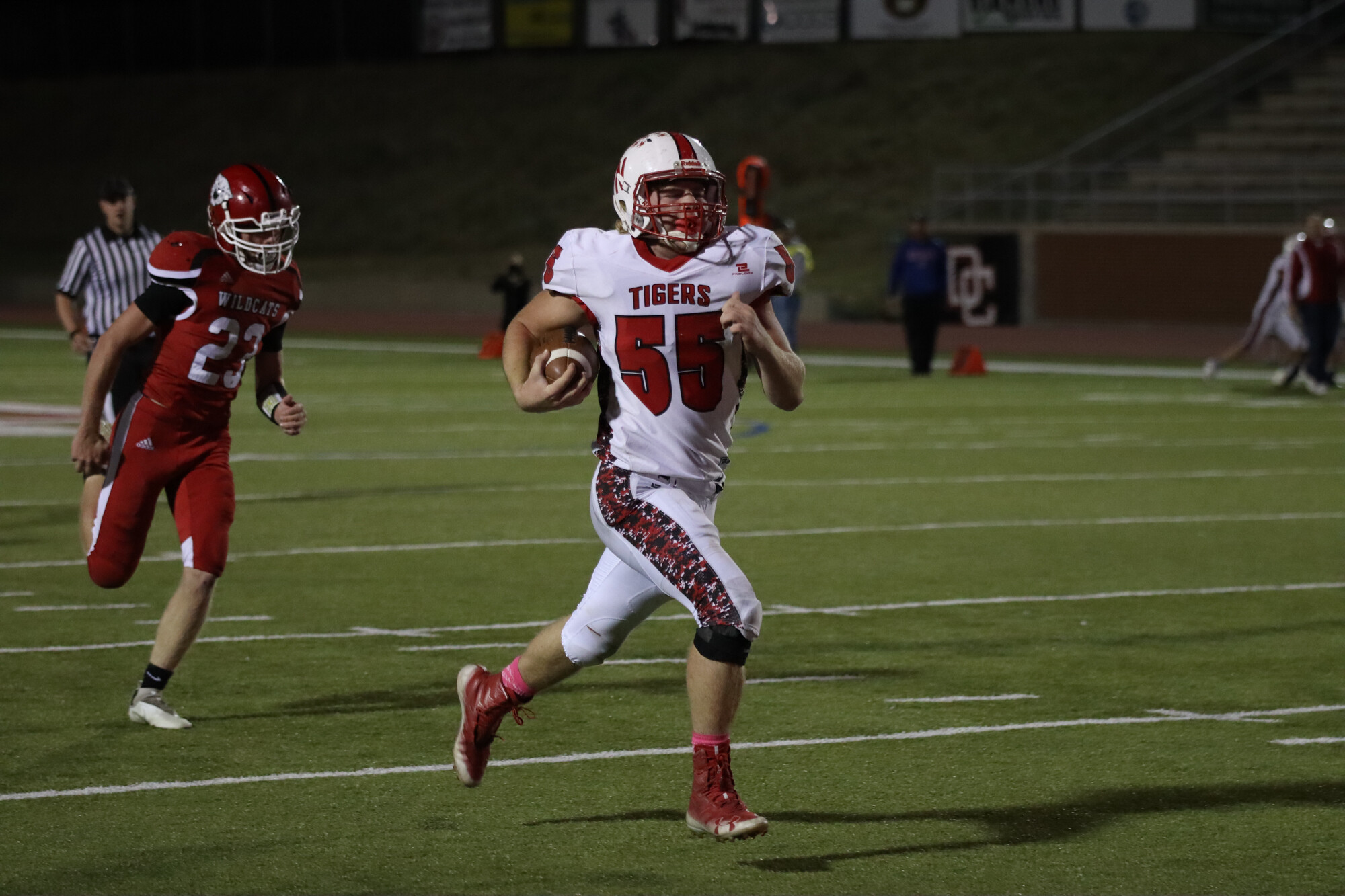 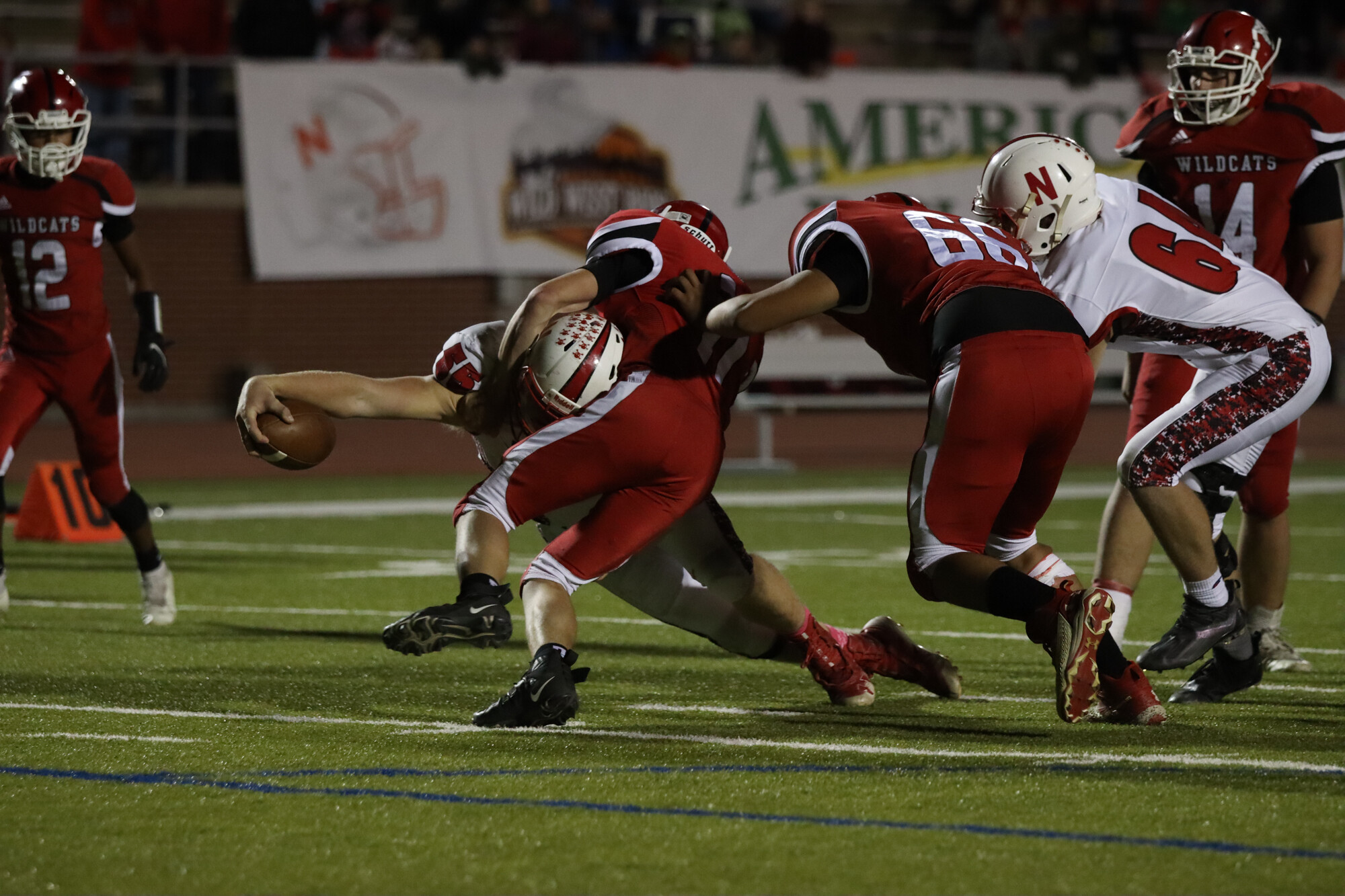 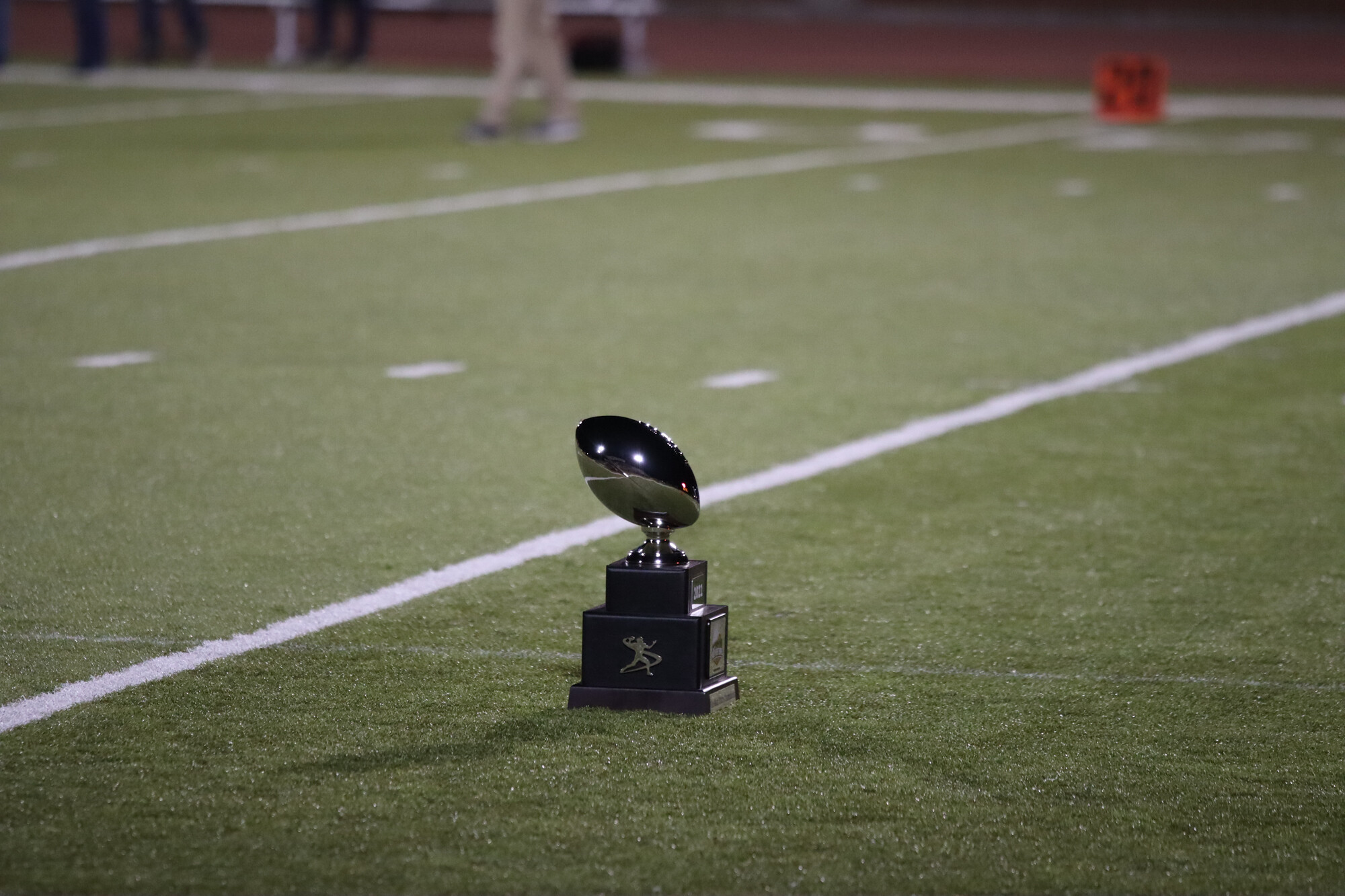 I planned for a few games around Pennsylvania. And that didn’t happen.