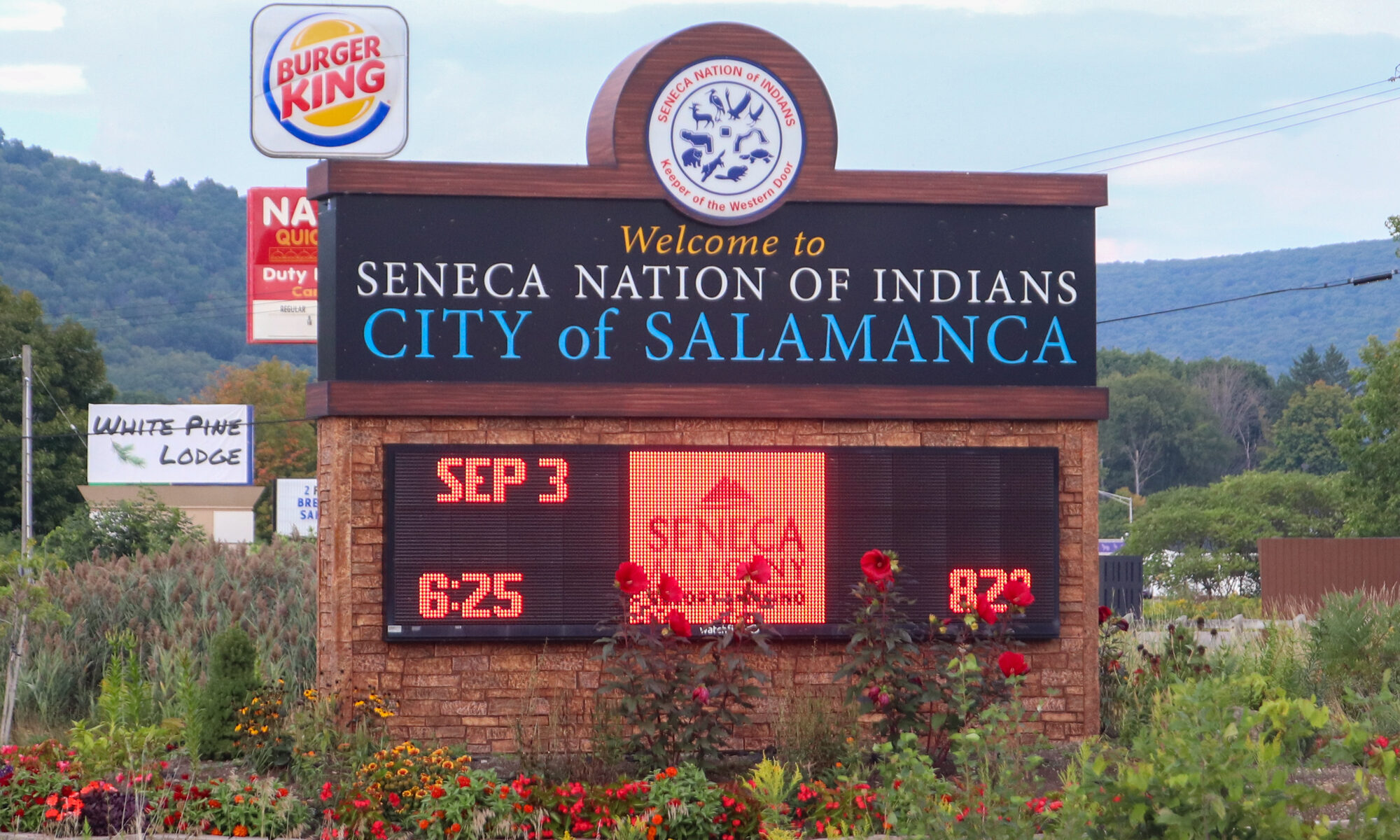 After two weeks of traveling extensively, it was a little closer to home for Week 2. Still a lot of driving, however. Thursday had a lot of options in Pennsylvania. There were games at North East, Lakeview, Oil City, and Cathedral Prep.

I had originally planned for Cathedral Prep. Even though they were playing a Canadian power team akin to an IMG or Prime Prep in the US, they would be a new place for me. Until I saw that North East was also playing on Thursday. And my mind was made up instantly. Despite all the times Greenville had played North East in the past, I had never seen the Grapepickers in action. Let alone made it to a game at their home field.

So, Thursday afternoon, I left home and stopped for gas before crossing over into Pennsylvania. The price being nearly 50 cents cheaper. A quick trip north on I-79 to I-90 was sidetracked by traffic on I-90 east of Erie. So, it was a brief detour on the Bayfront Connector north and a cut across to US20. At least it left me with a good welcome sign.

I’ve been past this stadium before. One time stopping by on a trip from New York just to see where it was located. A vineyard is located between the road and the parking lot for the field. The school didn’t have programs or rosters at either of the two gates.

So, I just headed to the field to get ready for the game. It was sunny, but not too hot. Though the sun was just above the horizon, so I headed to the visitor side. North East started with a TD, but Girard was just the better team. Taking a 28-14 lead and tacking on a field goal at the end to win, 31-14.

It was then a fast drive home on I-90 to OH11 to Youngstown. Got home just before 1am.

For Friday, I wasn’t sure which game to do. There wasn’t one that interested me that was available. So, I left it up to Twitter. Two polls, with me picking one of the two winners. I figured, as the matchup would help narrow down my interest I could more easily decide. I had listed Wilmington-Greenville, Moniteau-Elk County Catholic, West Allegheny-South Fayette, Harrison Central-Perry, Armstrong-Aliquippa, Titusville-Sharpsville, Union-Ellwood City, and Sto-Rox–Steel Valley.

In the end, the West Allegheny and Armstrong games were the two finalists. And, I thought West Allegheny might be the better game. And closer to home by a small factor.

And then my plans changed. I took my daughter up to my parents for the afternoon, and the trip to West Allegheny was a bit further. But, I did have in mind my spot for a pregame meal. A place in Robinson Twp called Sushi Bomb. It’s all-you-can-eat sushi.

Instead of a buffet, you order what you want as much as you want. The only rule is you get charged for whatever you don’t eat. And, there’s no to-go options. So, order accordingly. And it can get busy, so orders can take a while. So, put it enough. And that’s what I did. Two plates.

From there, it was a very quick drive west to Imperial. The line to get into the school’s lot was a long wait. Though they did let me park close to the stadium and not in one of the extended lots far away as game time was getting closer.

It was purely by happenstance, that in two games I had seen a North, South, East, and West. I thought that was interesting. For the game, I had seen both teams many times before. Though this was my first trip to West Allegheny’s Joe P. DeMichela Stadium. It’s nice. Sits along the backside of the high school. Turf, with a huge scoreboard.

Of the eight games I was interested in, this one had, what I thought, was the better chance of a close game. And I was right. For about 3 quarters.

South Fayette recovered a fumble on the opening kickoff and converted it into a touchdown. And then got an interception in the endzone on the next West Allegheny possession. They held firm, and the West A offense could only get across the 50. Just enough to try three field goals: from 37, 40, and 47 yards. Only the first two were good. And left them trailing South Fayette, 7-6 at the break. It was reminescent of my last South Fayette game. A 9-7 victory by Chartiers Valley over the visiting Lions.

Third quarter saw the West A offense get the lead. And the fourth quarter was just total domination. Four touchdowns. Turning a once close halftime score into a blowout, 40-7.

I then stopped at Peppercini’s for a Steak Ranch Hoagie to take home. I shunpiked, and took I-79 north and then through New Castle to home. Of those 8 games? This was the worst score. Go figure.

The next morning, it was a short drive to my parents en route to New York. I picked up my daughter who had spent the night, and made quick work to Sherman. We did stop for McDonald’s in Erie, and I had also gotten gas before leaving Ohio.

I had chosen CSP’s opener, regardless of my night game options. Of which there were a few. A lot of Western New York’s Section 6 had Saturday games. Given that Week 1, in New York, generally does not have Thursday games. I could’ve gone somewhere new. But, with my daughter with me, I wanted a game I was sure she wouldn’t be an issue. And figured in addition to CSP, a return trip to Salamanca would be problem free. The other option was a return trip to Fredonia. Though the sidelines there were,… beyond narrow. Salamanca’s new Veterans Memorial Park complex has plenty of sideline space with the outfield of the baseball field there as well.

This was my second time at Sherman. Sherman’s field is, well, a field. There are no permanent stands. It reminds me a lot of the 6 and 8-man fields I’ve encountered out west. Where a plot of flat ground, some field goal posts, and something resembling a pressbox was all you need to host a game.

The field is part of a baseball field and park. There’s a covered pavillion that the team takes shelter in at halftime. The field runs along the side street leaving town. A small pressbox is at the 50. The slope from the road to the field provides the seating for fans. To either sit on blankets or towels, or on lawn chairs at the top. Or even to just sit in their cars and look out their passenger windows.

There’s a concession stand/restroom building to the west. And the baseball diamond encroaches on the field’s southwest corner but is conspicuous. A playground sits further behind the batting cage.

Before the start of my game, my daughter injured her hand on the aforementioned playground. So, I spent the first half of the first quarter on the small portable bleacher on the visitor side. Also, getting her an ice pack. After that, though, she was back to her old self and alternated between the playground and the sideline with me.

CSP dominated the early going. Two quick touchdowns made it 14-0. A third possession looked destined for points. And then a pass was completed, but ruled a fumble straight into the arms of the defender and returned for the touchdown. This gave the Wilson Lakemen life, and they became a nuisance for CSP.

CSP answered, but Wilson called it with a 5 yard TD pass to make it 21-14. CSP would get a 4 yard run in the last minute of the half to take a 27-14 lead. And essentially close out the competitive portion of the game. The third quarter was scoreless, before CSP added two more scores in the fourth, to win 40-14.

This was CSP’s tenth victory I attended. Only the third such team I’ve seen win at least ten times in person.

After the game, we finished up photos on the field and made our way to the truck. And on to the night game. But, first stopping in Jamestown. When I brought my daughter up to a Jamestown Tarp Skunks game, we stopped on the way at a local park to play. The one with Lucille Ball’s evil statue.

This is what happens when you eat Vitameatavegamin. #roadtrippin pic.twitter.com/Ohrv6r3Q3T

The playground there was terrible, so we headed toward the game I found another playground for her. This one on the northside of Jamestown. Which she loved. And I promised if we were back in the area, we’d stop. It’s funny, but my six-year-old daughter has favorite playgrounds around the country with the standing promise to stop at them whenever we’re near.

After that and a brief stop at the drive thru at McDonald’s, we were on our way to Salamanca.

The game started easily enough. Salamanca scored first, and then there was a lightning delay. The skies were great, but the school has a lightning tracking app that reported a strike within ten miles. So, we had a 30 minute break. My daughter and I walked down to the truck, and then to the Dollar Tree at the corner. We waited in the air conditioned truck for the alarm to go off to signal the game was restarting and walked back in. Salamanca scored immediately, but I didn’t get a tweet out for it.

We stood along the fence as my daughter had a blow pop from the Dollar Tree and we weren’t going to be allowed on the field. Or, at least I presumed that being the case for media as well as visiting fans. So, we stood around the perimeter for the rest of the second quarter. And then made our way to the field at the end of the halftime break.

Salamanca held a 20-15 lead at the break. But it wasn’t enough. The entire second half belonged to Randolph and Xander Hind, their marquee running back. After relinquishing the lead, Salamanca was unable to muster a composed drive. And would lose, 39-20.

After that, it was a long 2:30 drive home. And then a tornado warning on Sunday. If there was truly a tornado and not just one indicated by radar, it did pass south of me. 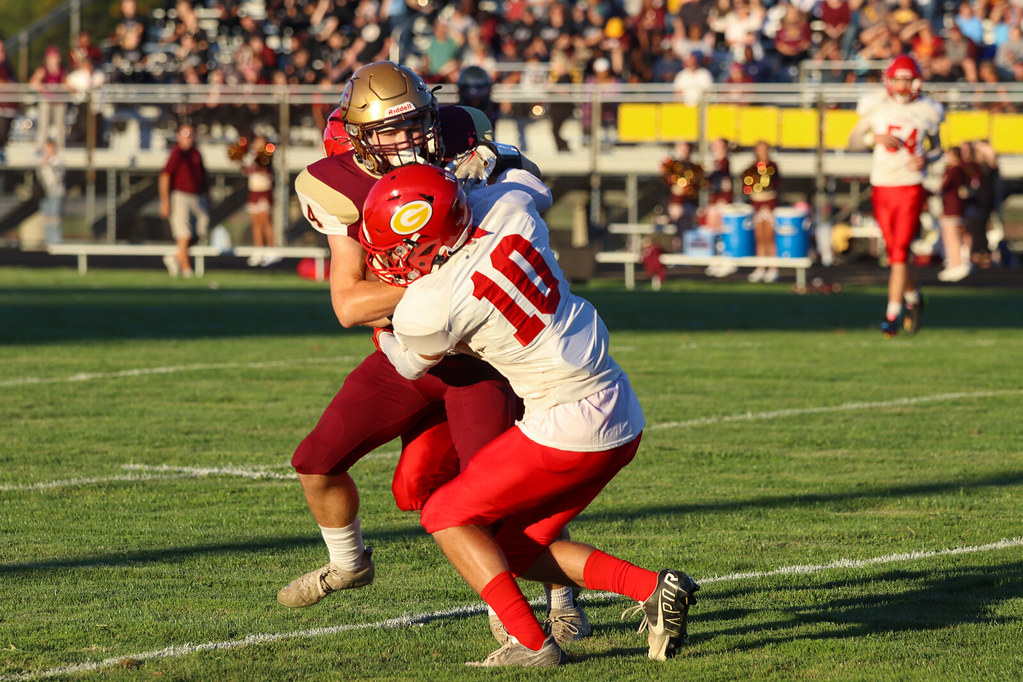 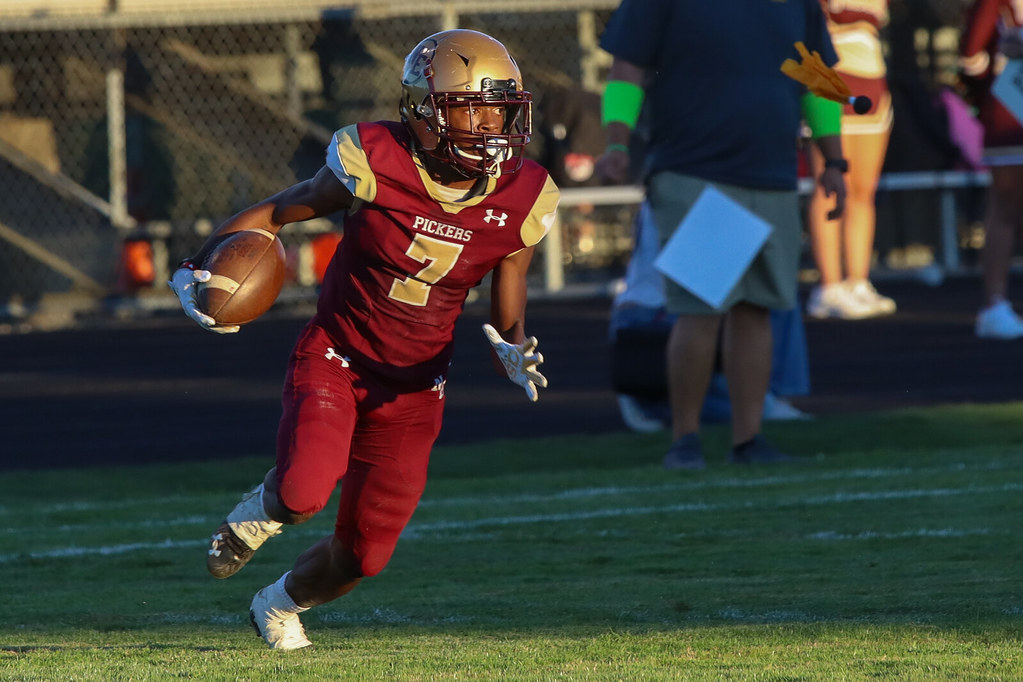 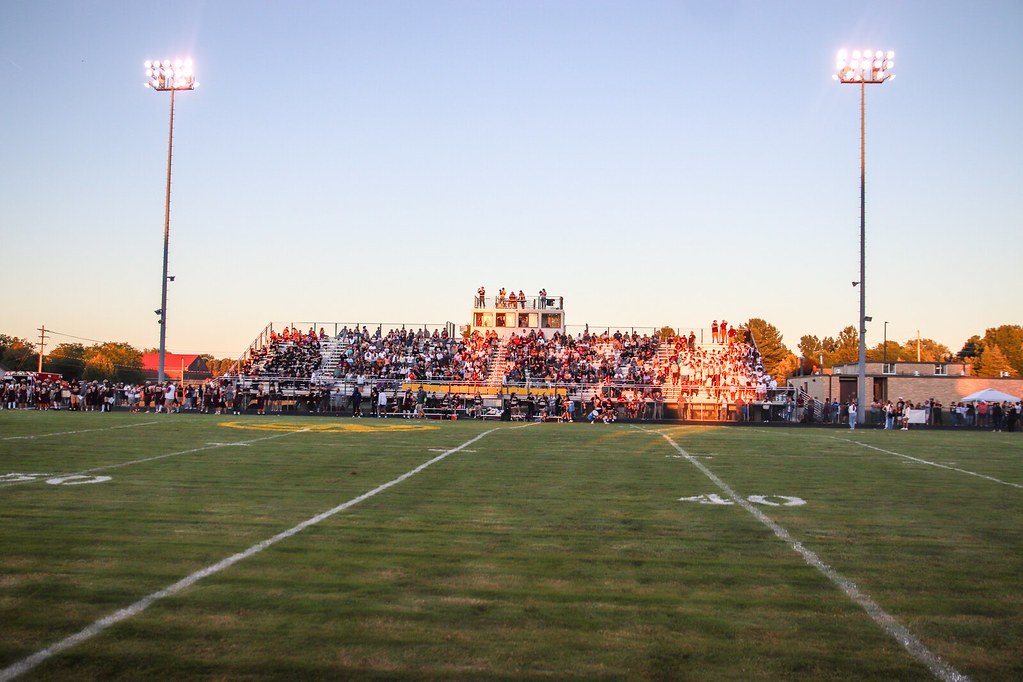 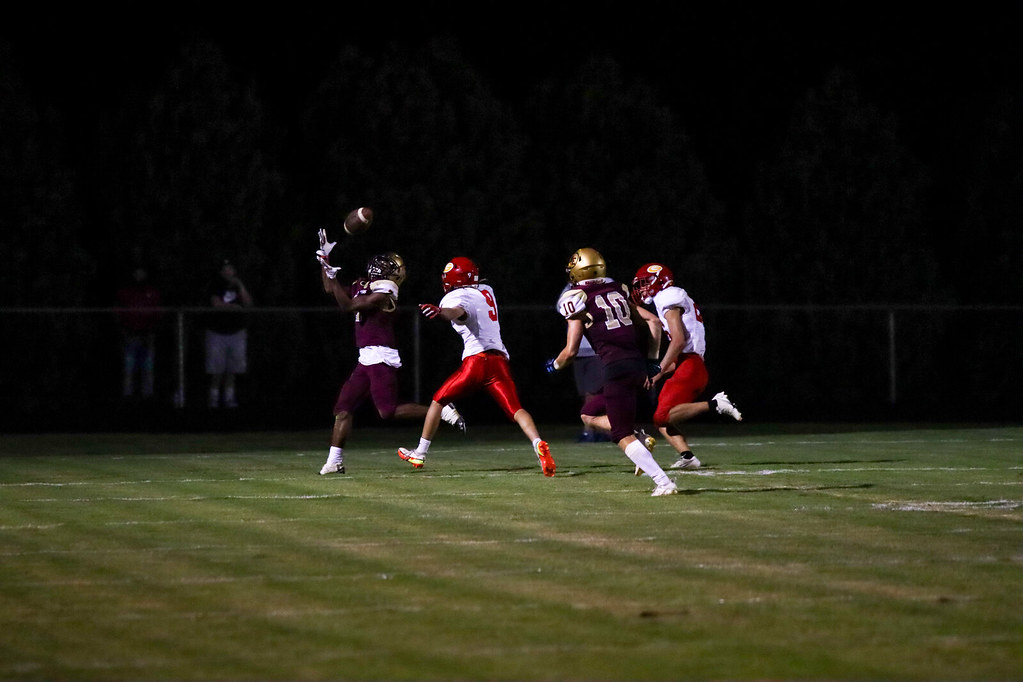 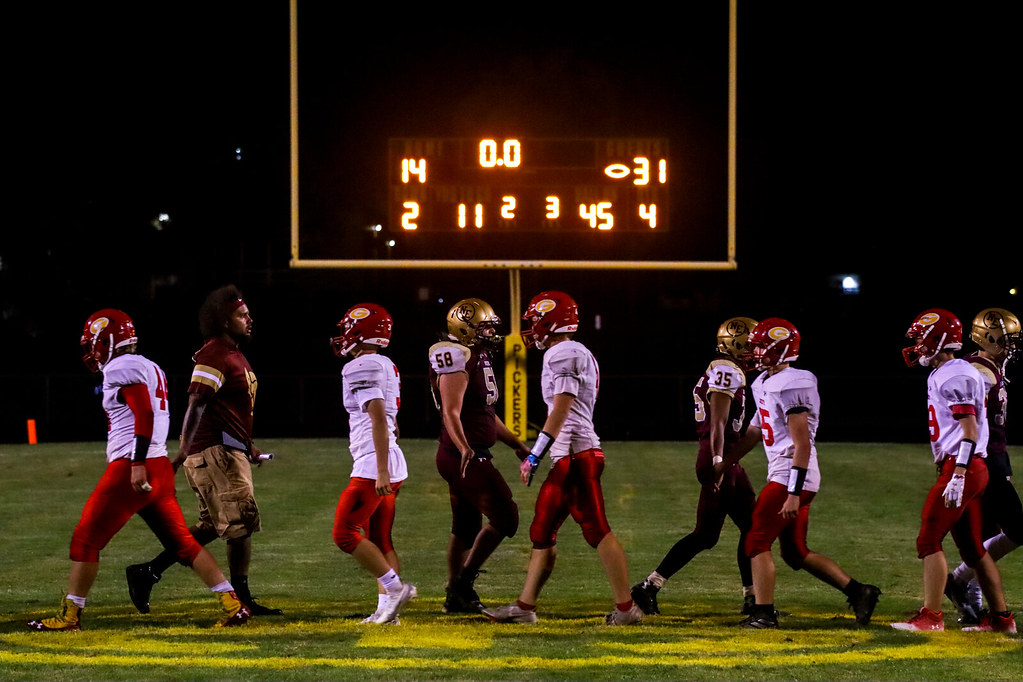 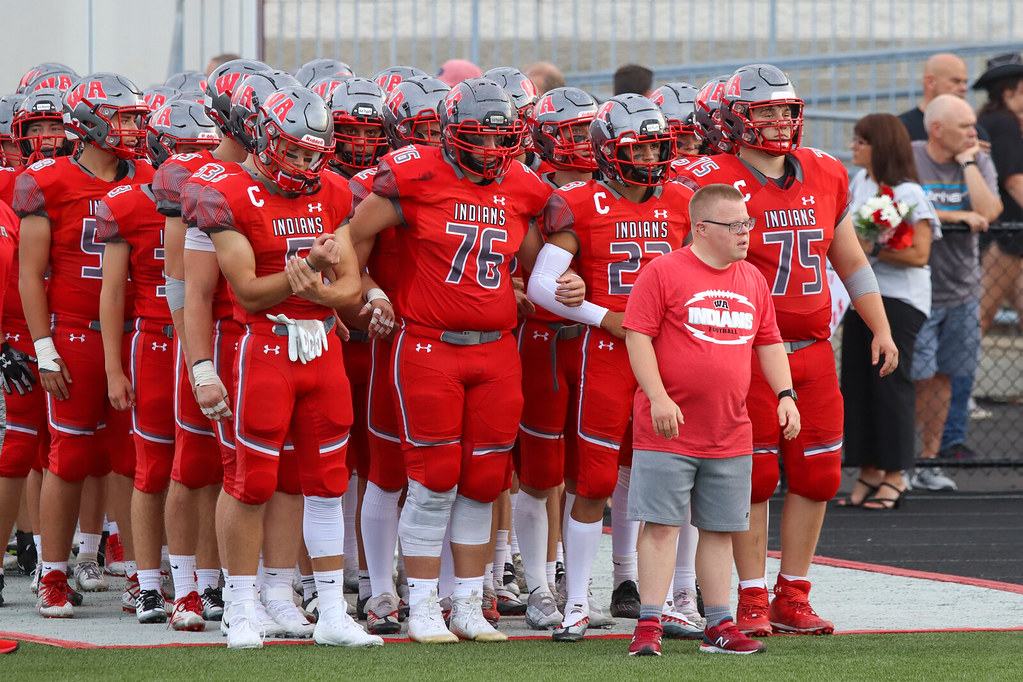 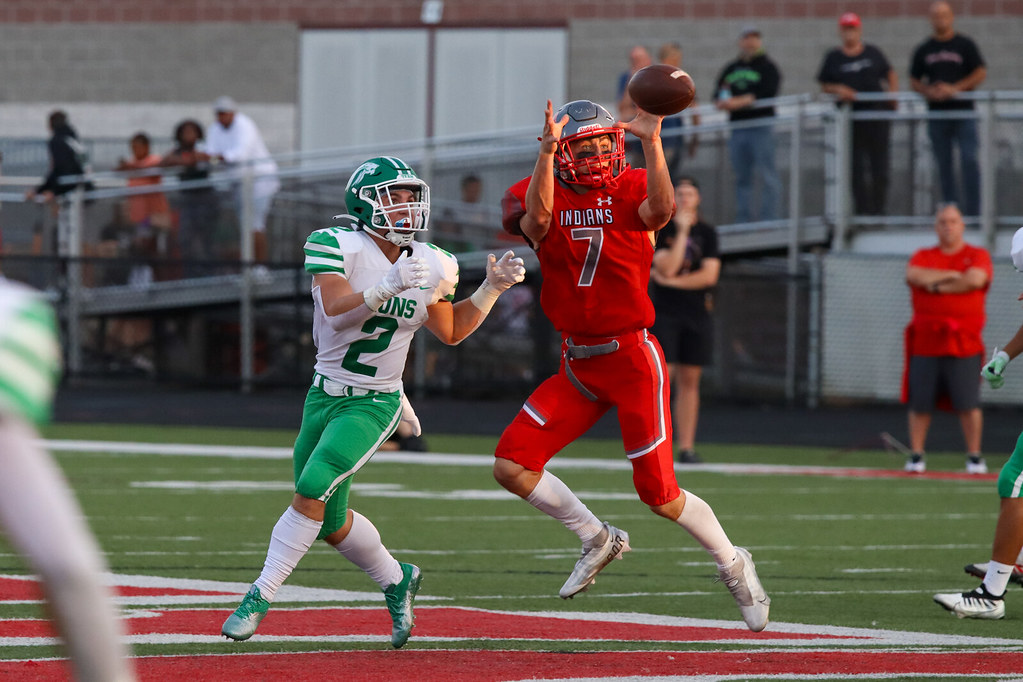 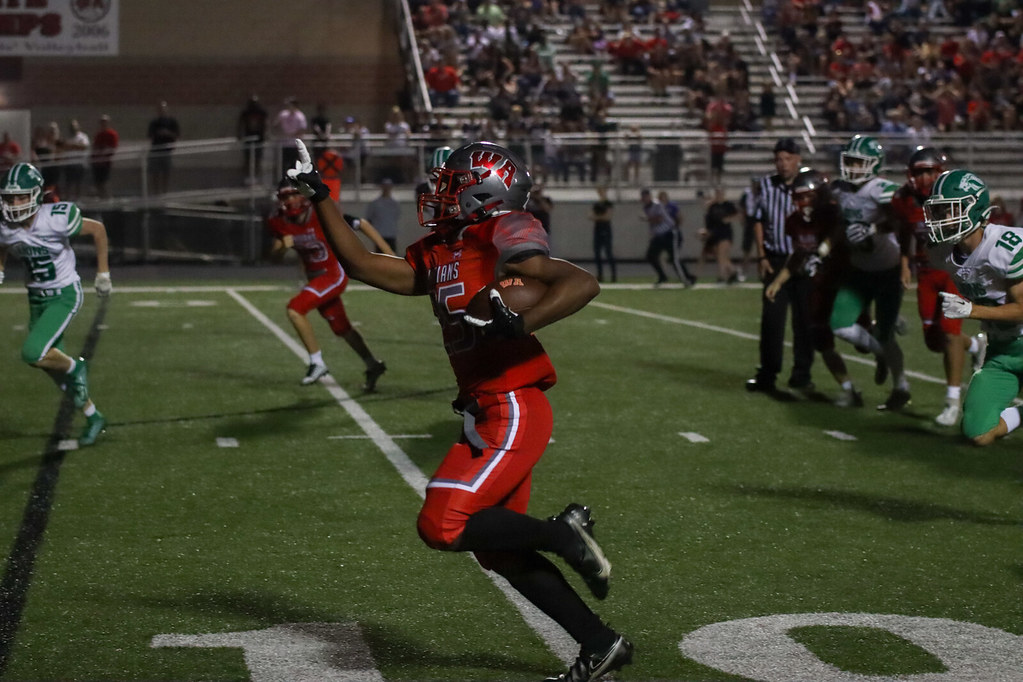 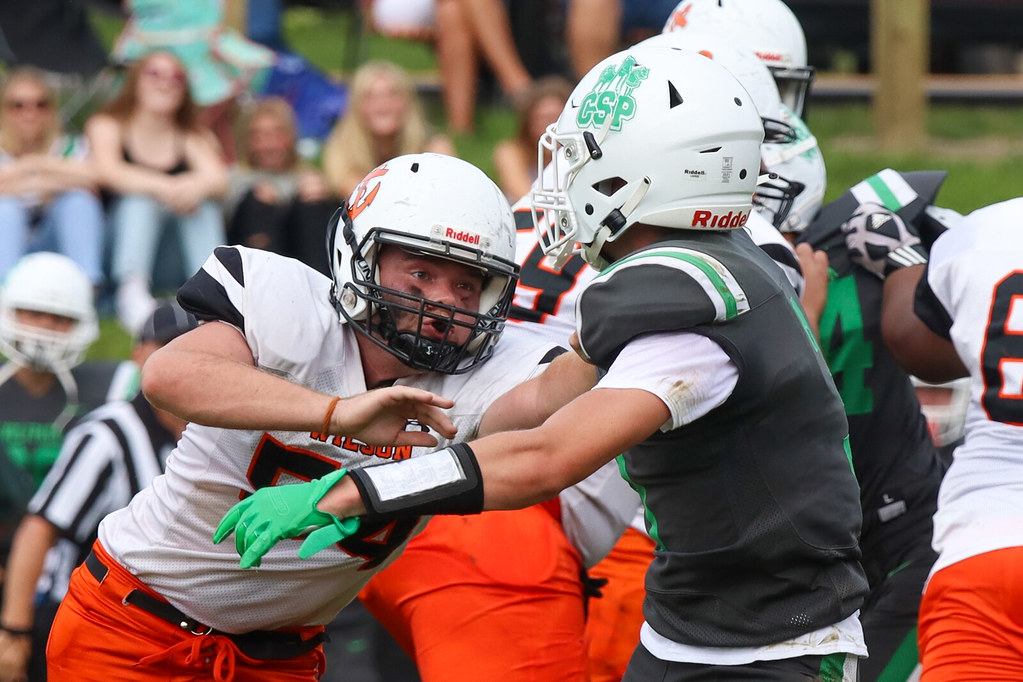 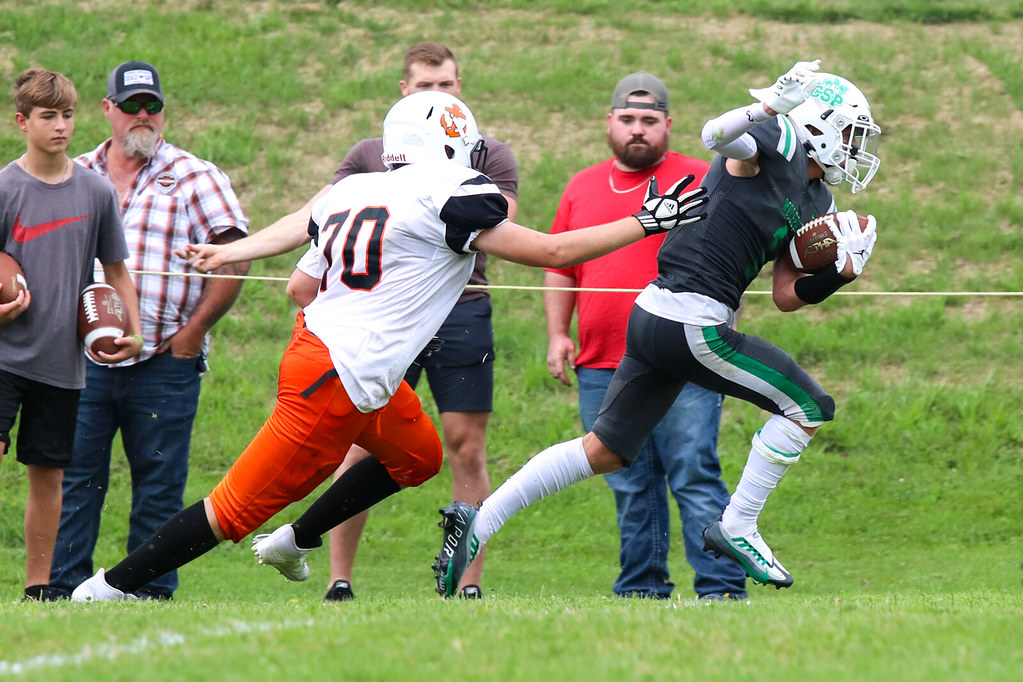 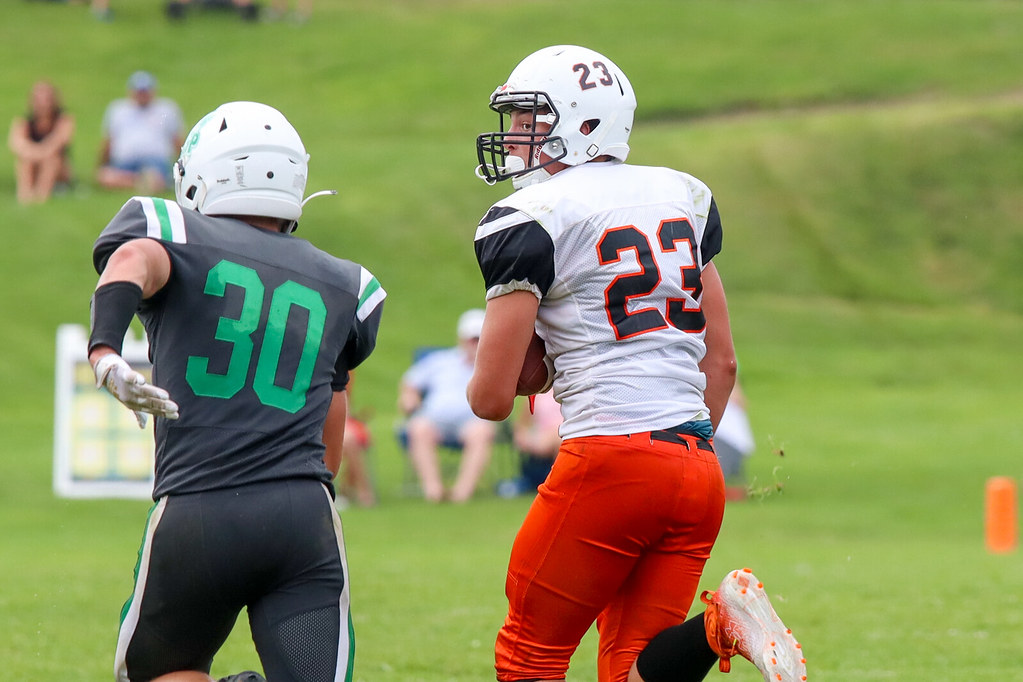 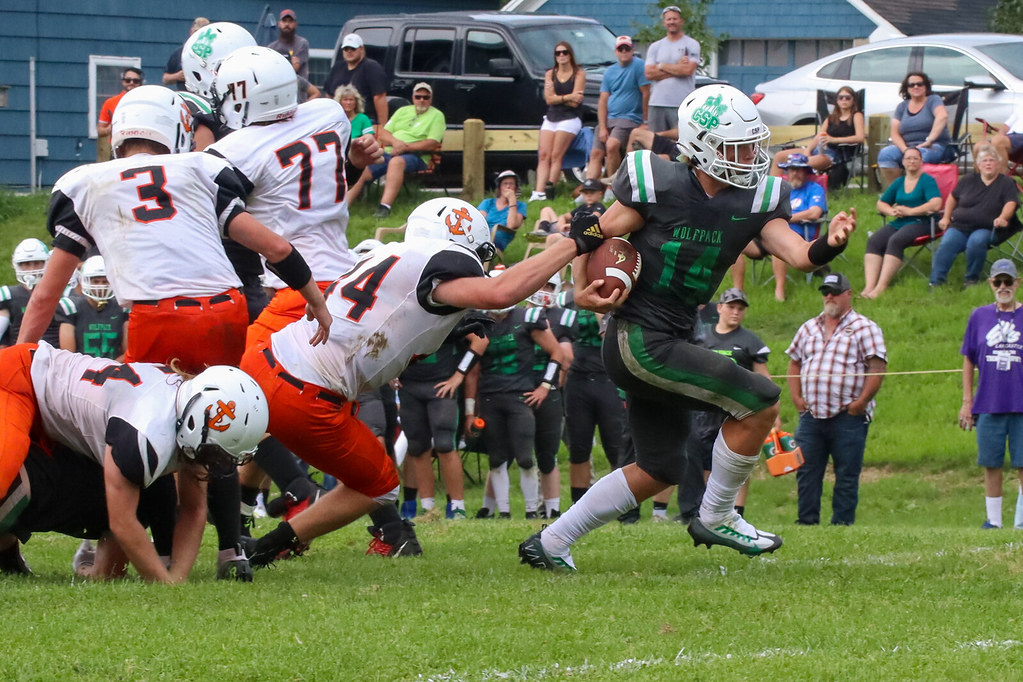 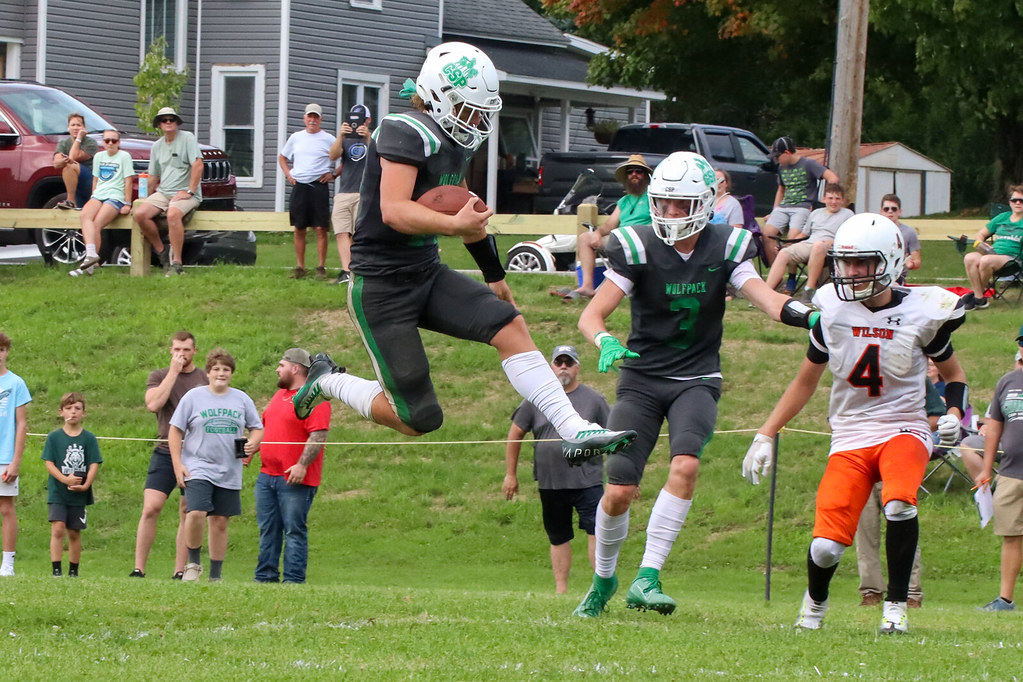 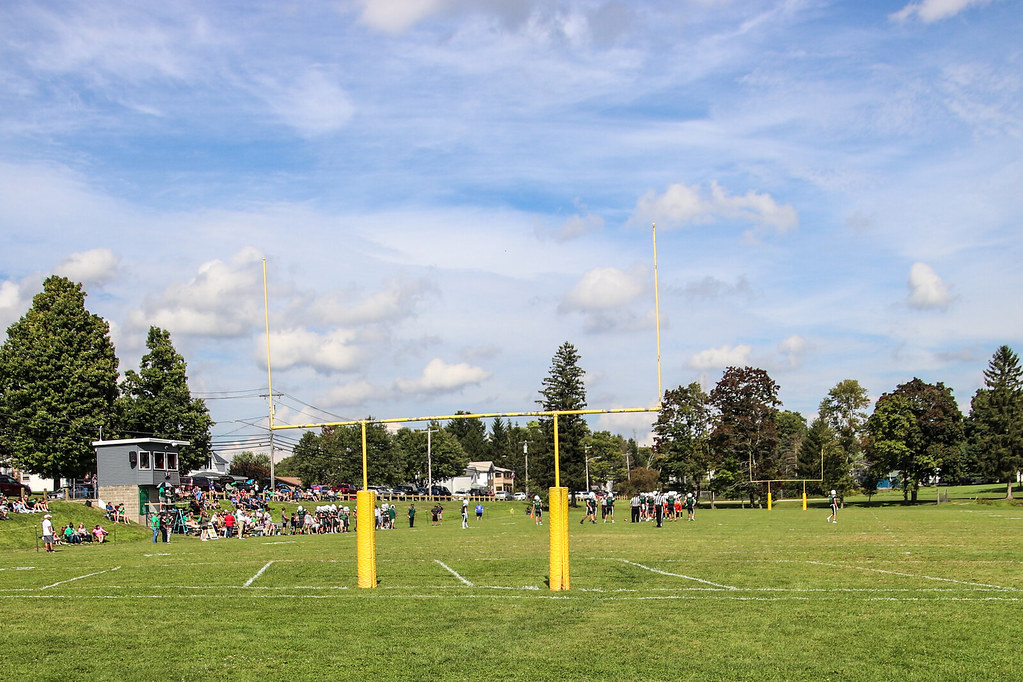 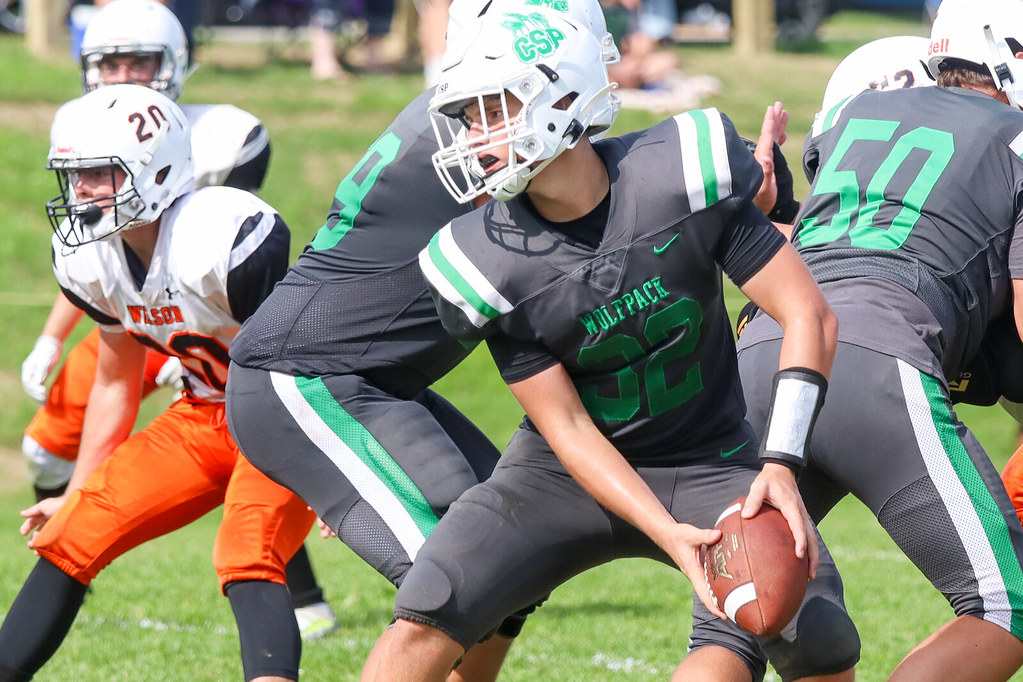 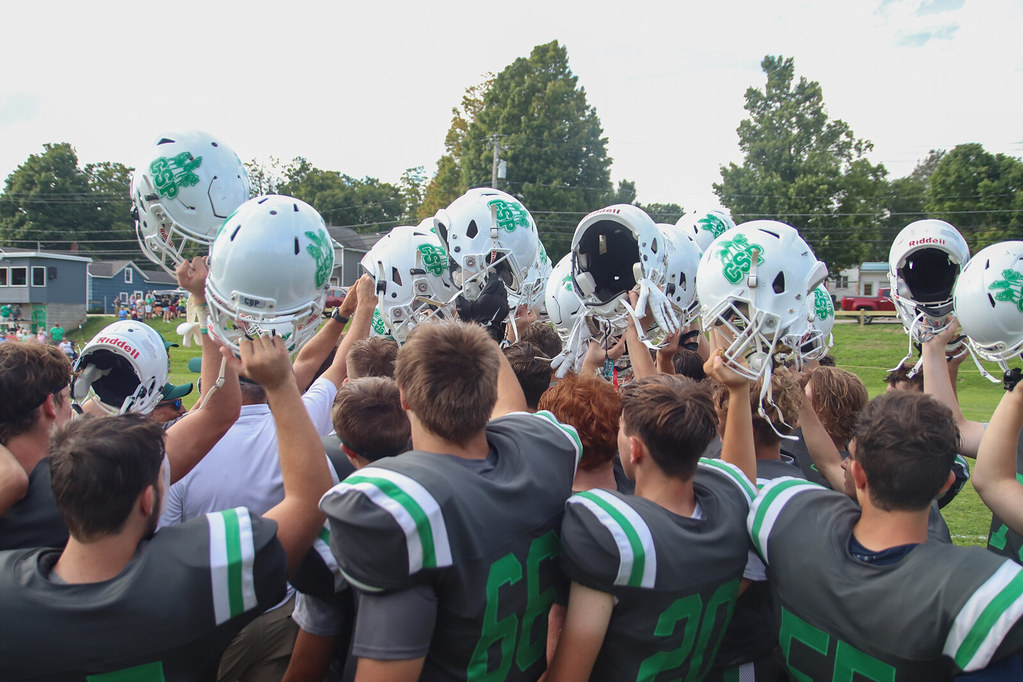 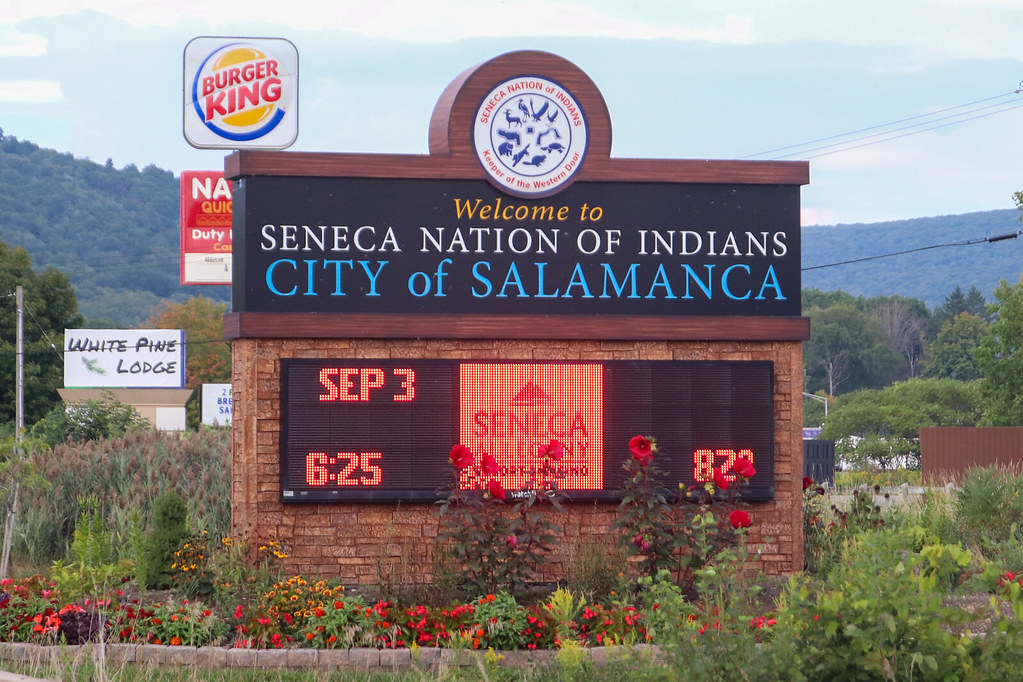 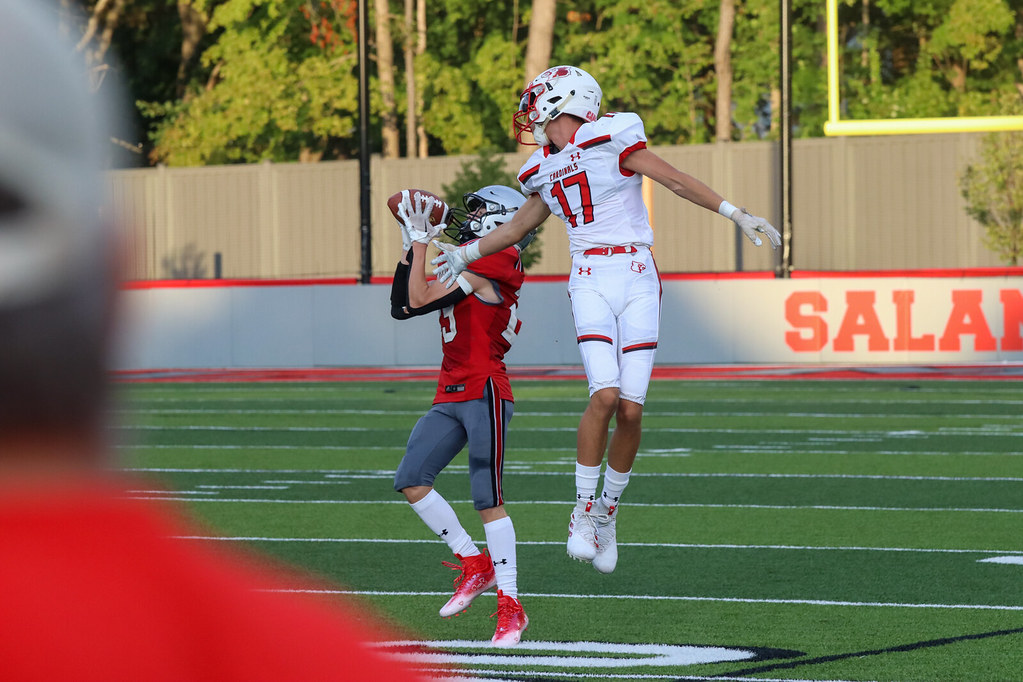 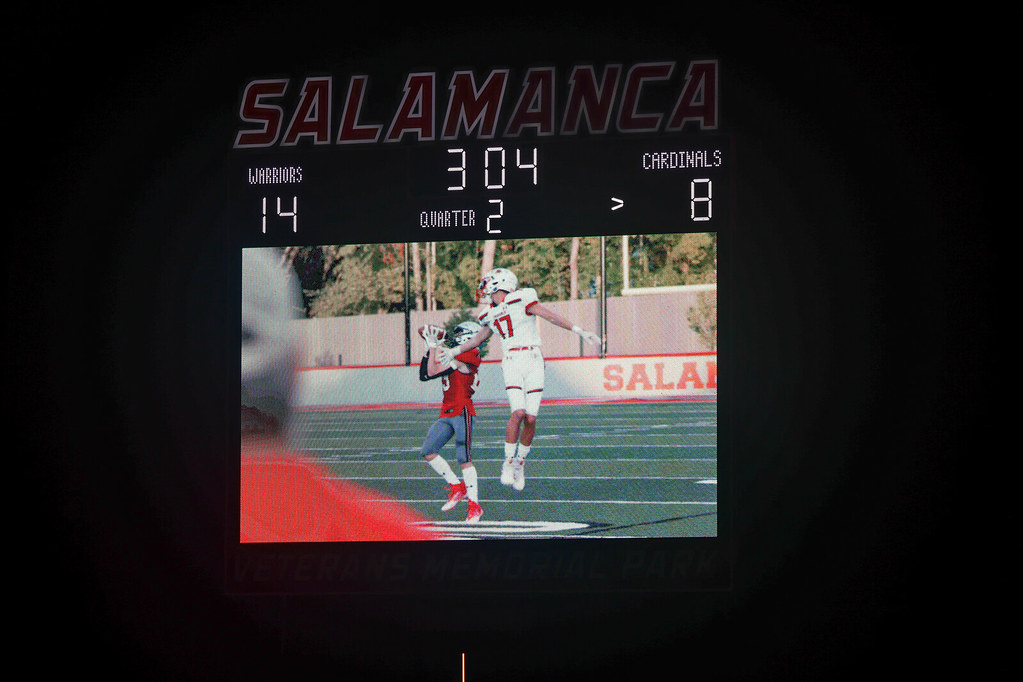 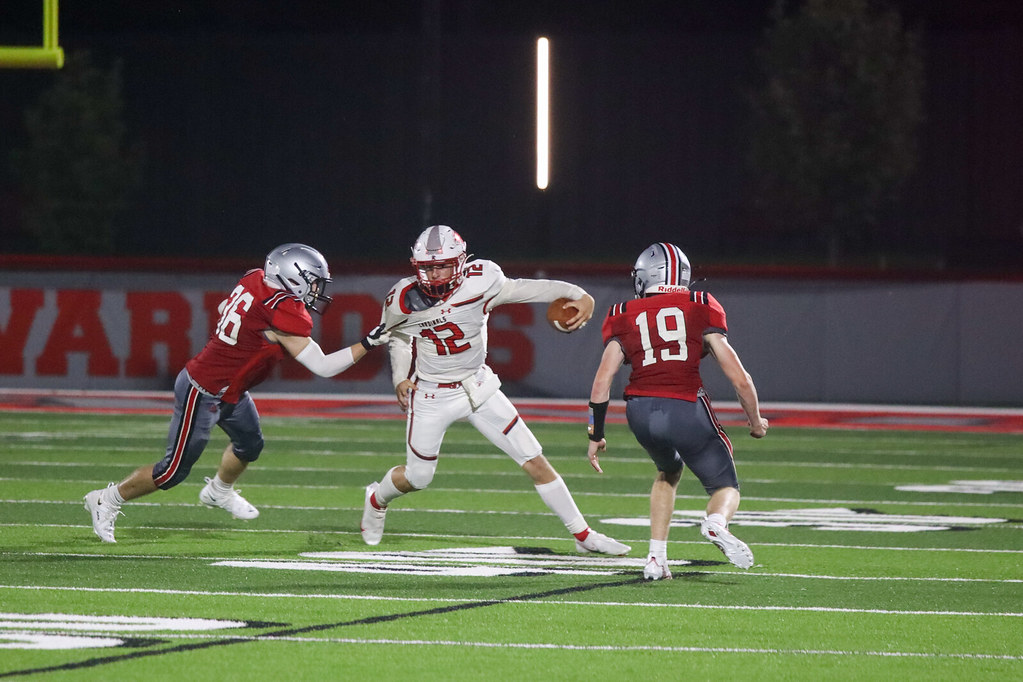 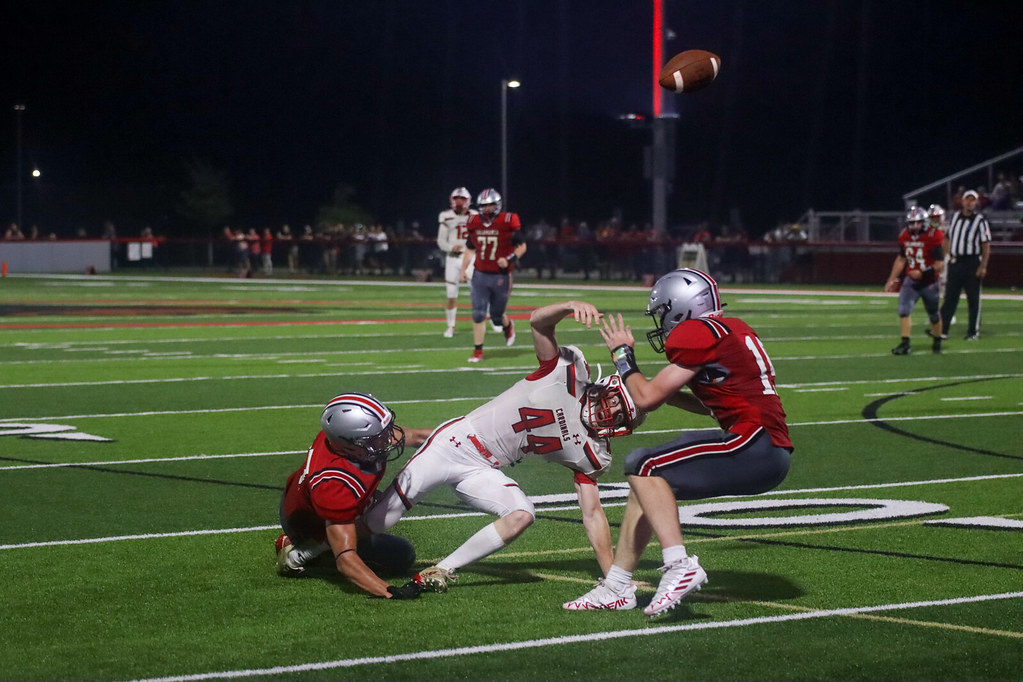 For the weekend, including the side trip to my parents, was 772 miles. Total cost was $76.32 for gas and $106.30 for food. Most of which was Sushi Bomb and Peppercini’s. The rest was eating at home or McDonald’s for my daughter. Who’s at the stage where a Happy Meal is the height of cuisine.

I’ll see my first game in Ohio next weekend. Though not sure which. On Thursday, I will either travel to Frewsburg (NY) or Hannibal (OH). I had considered Frewsburg a lock, but I’m thinking Hannibal for the River-Magnolia game now. Still haven’t decided. For Friday, will be a doubleheader. First a Carrick-Uniontown game at Cupples Stadium in the afternoon, and one of five different night games. With a preference for Plum v. Shaler. Other options include South Park, Steel Valley, Cornell, Valley, and Upper St. Clair. Saturday, though, is set. An afternoon trip to suburban Cleveland for Lake Catholic hosting Erie. This game will be at Lake Catholic’s home field and not Mentor’s Osbourne Stadium. The night game will be a trip to Erie for a matchup between host Mercyhurst Prep and Seneca.