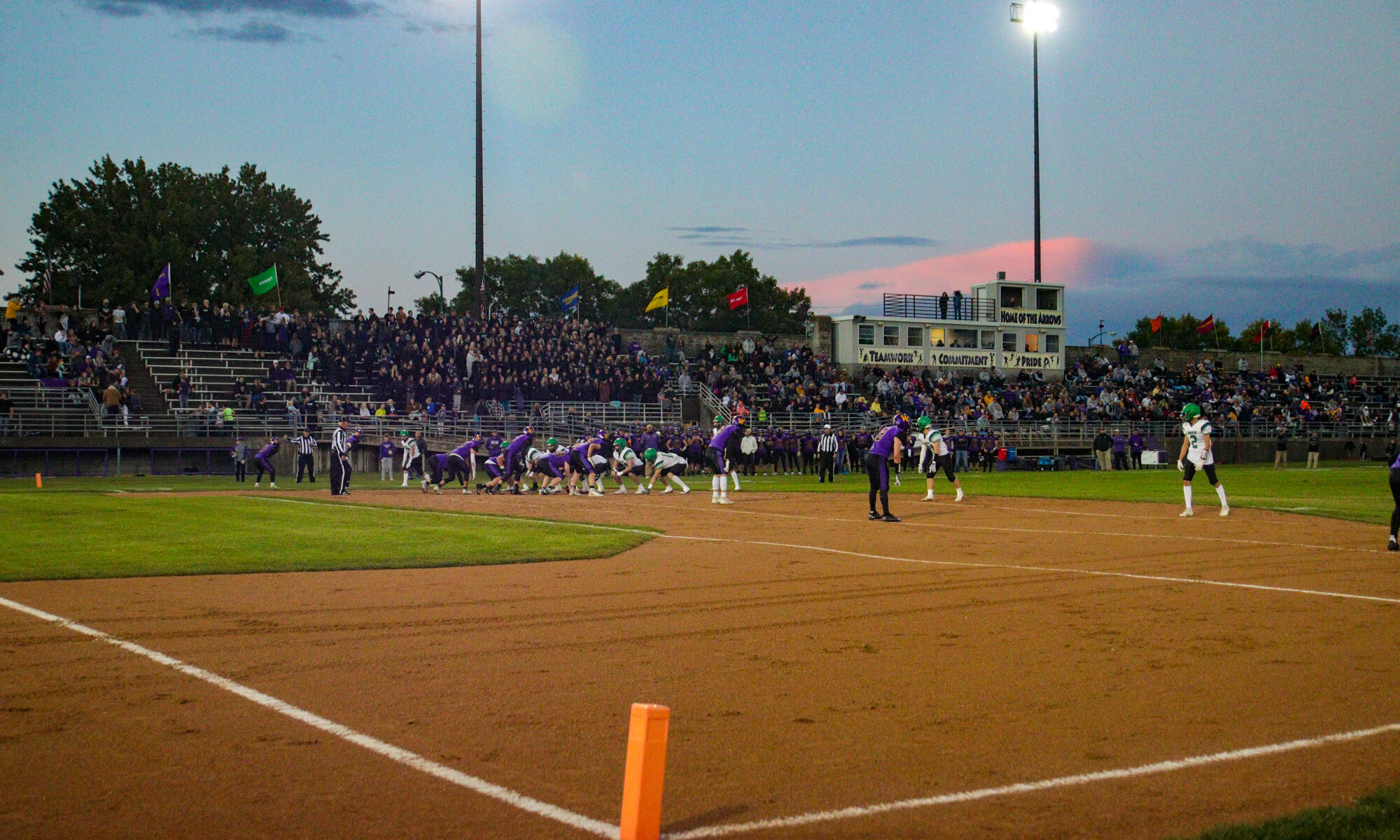 My second weekend away from home took my back to a familiar place. North Dakota. However, there was just the simple matter of getting there. And I had a group of games in mind. In South Dakota, there was two doubleheaders at Northern State University in Aberdeen.

Aberdeen is a city I’ve been to many times in the past. One of those towns that’s deceptively large. Located in north central South Dakota, I’ve seen several Hub City Hotshots games in the old Expedition League. But, never a high school game in town. In fact, I wasn’t even aware that Northern State had built their own stadium. Formerly, they played at the High School’s Swisher Field.

But, I had to get there in time. I had some fall-back games in Nebraska. There were some Thursday games around the state. But, I didn’t have time. Plus, the Browns were playing the Steelers on Thursday Night Football. So, I instead figured on just Friday and Saturday games for Week 5.

There was a doubleheader on Friday, but I wanted something different. So, I was on the lookout for games that would be interesting. One was Woonsocket/Wessington Springs/Sanborn Central against Tripp Delmont/Armour/Andes Central/Dakota Christian. That game was being played in Armour and it was moreso the intrigue of seeing a game featuring 7 different schools. But, I passed on it because I wanted to be closer to my Saturday afternoon game. So, I headed to Watertown instead.

Watertown was hosting T.F. Riggs out of Pierre. And, like Ellwood City, they just go by their city’s name of Pierre. And for those outside South Dakota, it’s pronounced Peer, not Pee-air. It would be the third time I’ve seen them play. The first team in South Dakota I would see three times.

Watertown Stadium was built in 1941. It's definitely one of the unique high school football stadiums. Rare to see an infield present on a football field in 2022. @PaFootballNews #BeyondTheKeystone @605_sports @Arrow_Football @TFRiggs pic.twitter.com/akbWEAc0UA

Watertown Stadium was opened in 1941. And it’s unique. Built as a baseball stadium, the stands run from around the first base around home plate and along left field which serves as the home sideline. The stadium is well lit, but the far side lighting is distant as there is a baseball field still in play. The west endzone sits on the infield with the dirt still present.

When I arrived, the rain started falling. And then, what I thought would be plenty of time to walk the field and get some stadium shots, a lightning delay in pregame. The stadium was cleared and many of us huddled under the entraway around the 50 yard line. When the delay was lifted, I made my way for the covered grandstand behind home to get some stadium shots and wait out the still sprinkling rain.

I had looked at the prediction when I was figuring which game to focus on. But, Watertown was doing everything they could to make it competitive. Opening with a 24 yard TD pass to lead 6-0 after one. Pierre tied it at 6-6, but Watertown got the lead again, 13-6. But that’s all the hometown Arrows could muster. Pierre would go on a tear and score four total TDs in the second quarter. Three more scores in the second half by the visitors was all it took. As Pierre T.F. Riggs won, 47-13.

The next morning, was a short 100 mile drive to Aberdeen. The first game was set to kick off at 1pm. And I arrived in town just about 1130am.

Now, I didn’t realize untiL i called about this weekend’s games that Northern State had built their own stadium. So, i was mostly expected two games at the high school on the southeast side of town. I had seen the field before, but not for a game. However, calling the school I found out it was on campus, and not at Swisher Field. But, Google Maps wasn’t showing where the new stadium was. So, a quick search online found Dacotah Bank Stadium. And a rough address of where it was, next to the basketball arena in a once grassy lot on the south end of the campus.

I wasn’t expecting any rain today. And I hadn’t thought to bring in rain gear. There wasn’t supposed to be rain. At the start of the first game, it sprinkledd just a little. Not enough to be an issue. Just enough to be a nuisance.

Last year, I saw a game at Ipswich. They were hosting North Central. Leola and Frederick were a new team for me to see. In north central South Dakota, these four games at Northern State were 9-man games. Played on a standard 100×53.3 yard field. There was a good crowd for the opener.

Leola/Frederick started facing a 6-0 deficit. But then a 6 yard and 5 yard runs gav ethem a 14-6 lead in the 2nd. A Tyler Hettich TD followed by an interception and another score of his made it 22-14, Ipswich. With a furious final few minutes, Ipswich led 36-22 at the half. After a scoreless third, Ipswich scored twice in the fourth. Leola/Frederick tacked on one final score. Ipswich 50, Leola/Frederick 30.

After the first game ended, the skies opened. The rain just kept materializing above Aberdeen. So, I made my way for the stands. The lower level, that was only open for fans, had a slight overhang from the club level. So, I sat up in the top row to watch the start of the second game. To stay dry. Or so I thought. Because soon this new, only two-year old stadium started leaking. Dripping on the bleacher to my left. So, I had to move down a bit, but kept getting splattering drops of water hitting me from time to time.

This was my first time seeing Great Plains Lutheran. They are from Watertown, where I just was the night before. I had seen North Central last year. And, they’re high on my list to see a home game of theirs.

I wish this one was a better game. Instead, Great Plains Lutheran came out just slowly driving through the North Central Thunder. After a single score in the rain of the first quarter, four more touchdowns in the second quarter made it 34-0.

While sitting in the stands, I looked up the three schools that make up North Central. Eureka (44 students), Bowdle (30), and Edmunds Central in Roscoe (35) total only 109 total high school students. Which easily explains why 9-man football exists. Though, in other states they’d probably be 6-man if that were an option.

Though they toyed with the 50 point mercy rule, the missed PAT making it only 41-0 made it a two score endeavor to end the game. With a blazing fast running clock, the second half went quickly, regardless. Spencer Buechler ended the scoring with an 8-yard run to put North Central on the board with only 58 ticks left on the clock. Great Plains Lutheran would win, 41-8.

It was a fun weekend. Not particularly any great finishes. But three new teams to the list, in two new places. One very old, and one very new. Northern State has something special they’ve built in Aberdeen. And their Lake Area Region Football Classic is definitely the start of something good based on the crowds. We’ll have to see what, if at all, they do next year. It could be similar to Ball State’s all-day lineups for the Tri-East Conference or Central Indiana Conference Days. 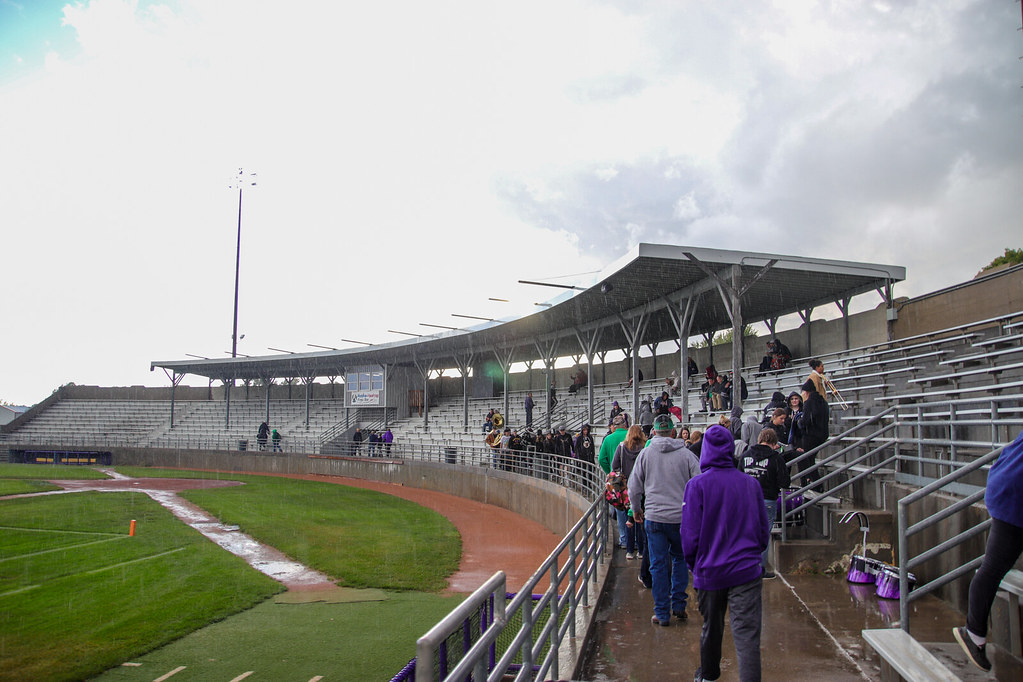 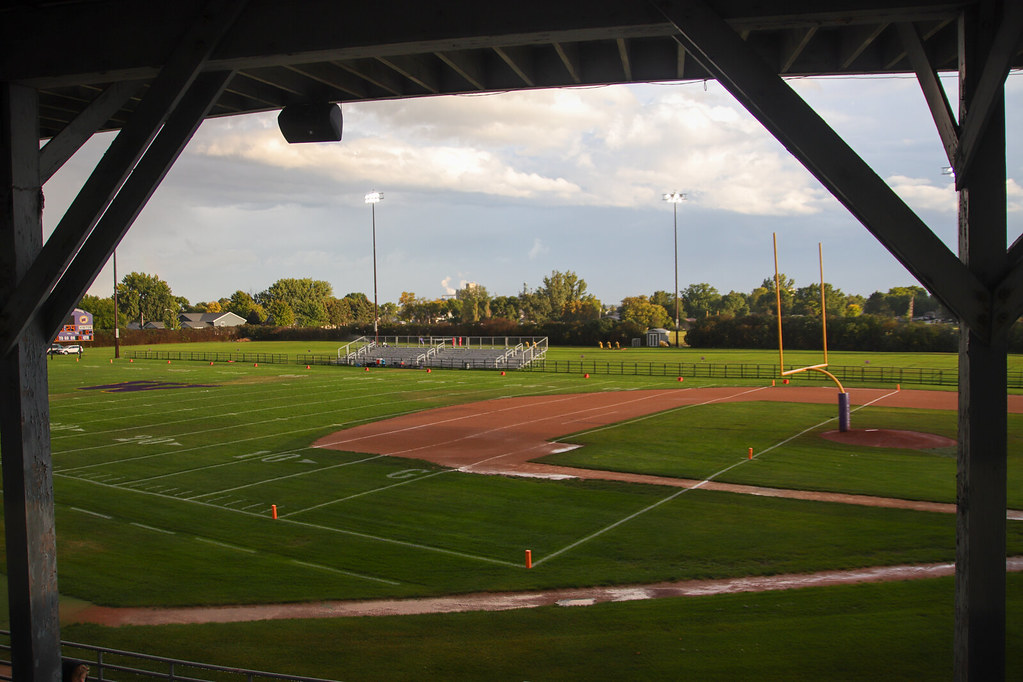 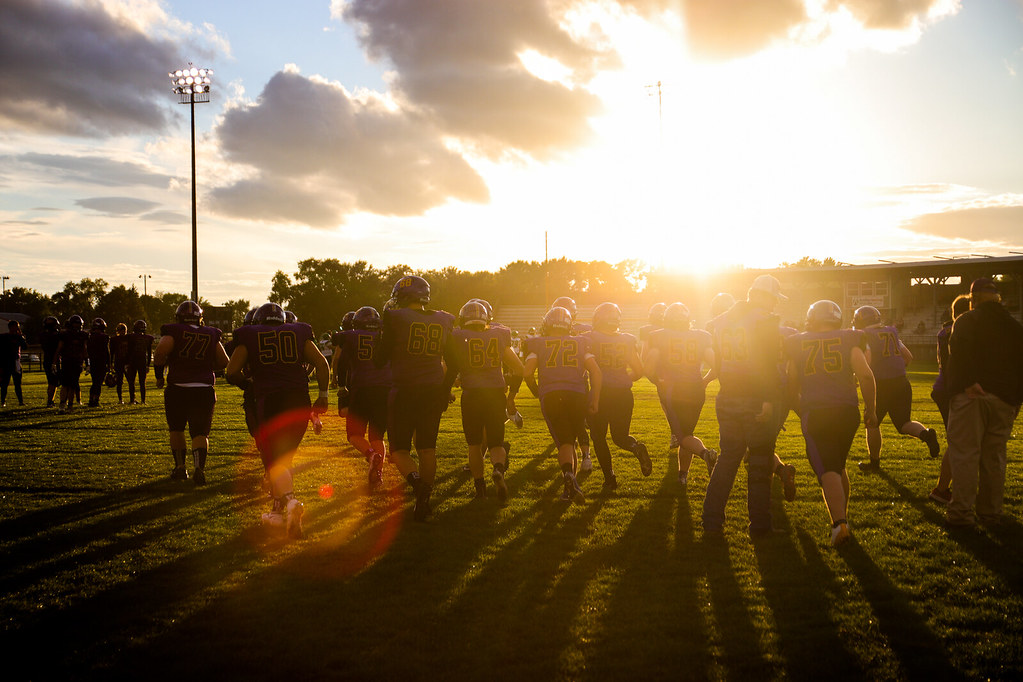 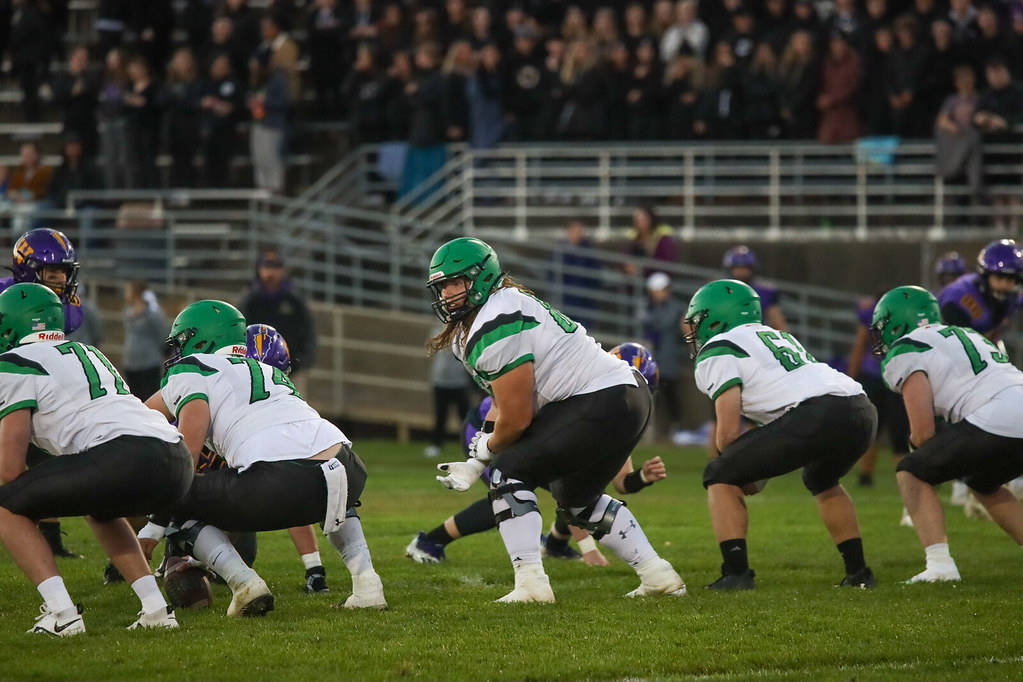 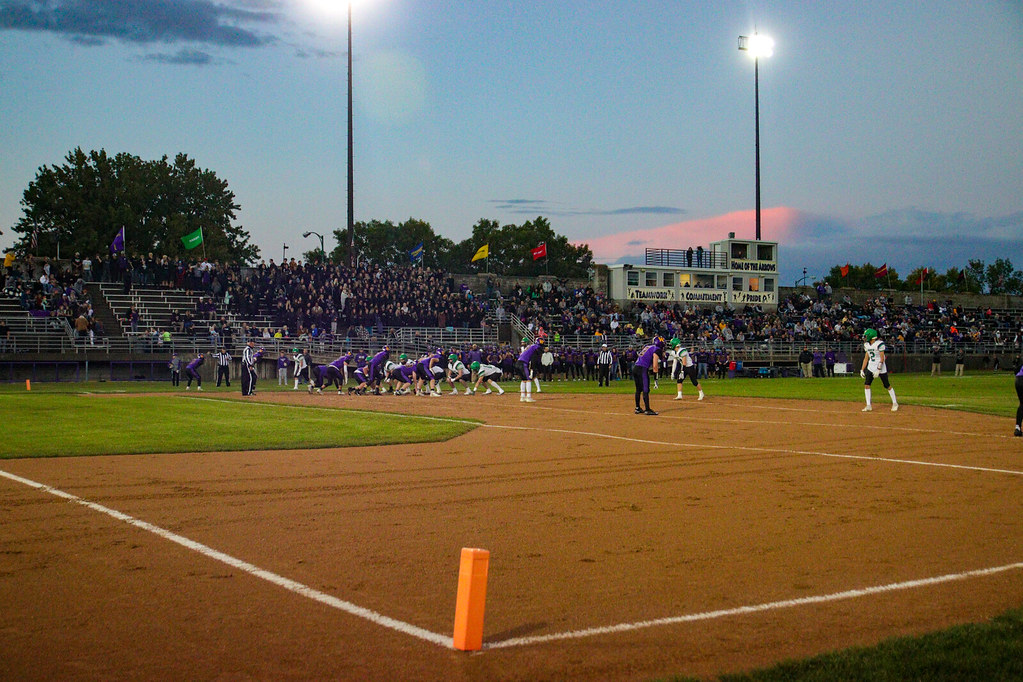 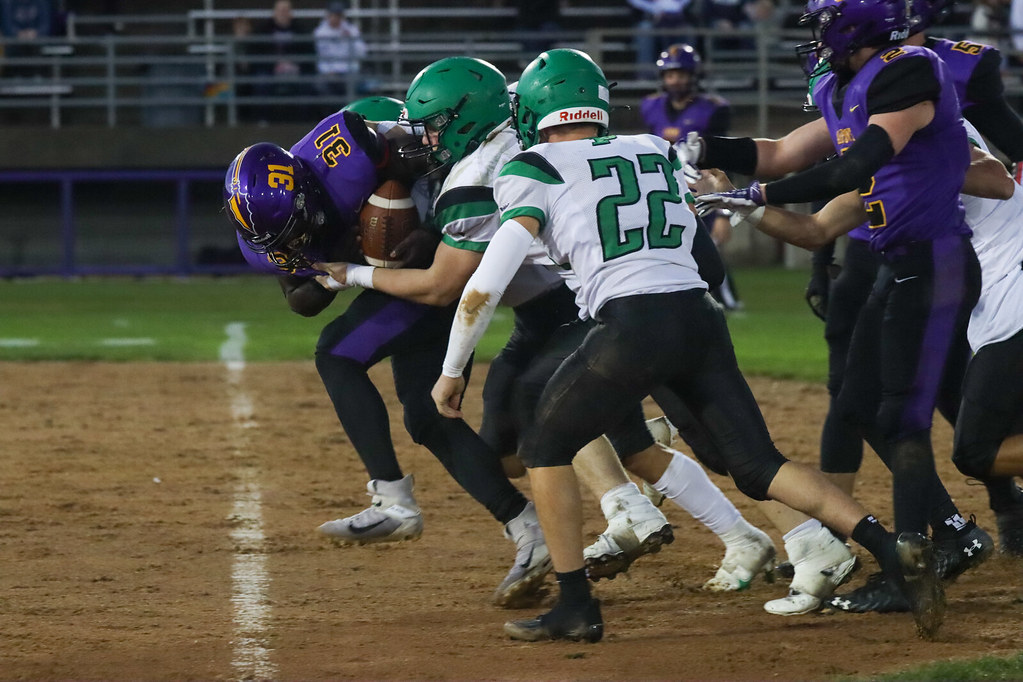 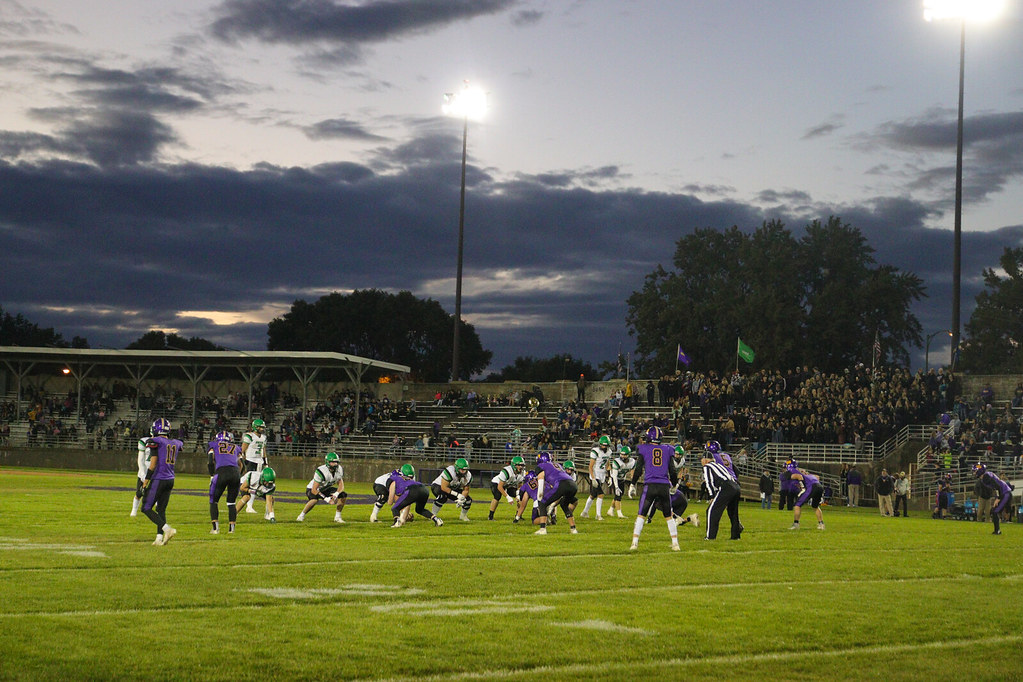 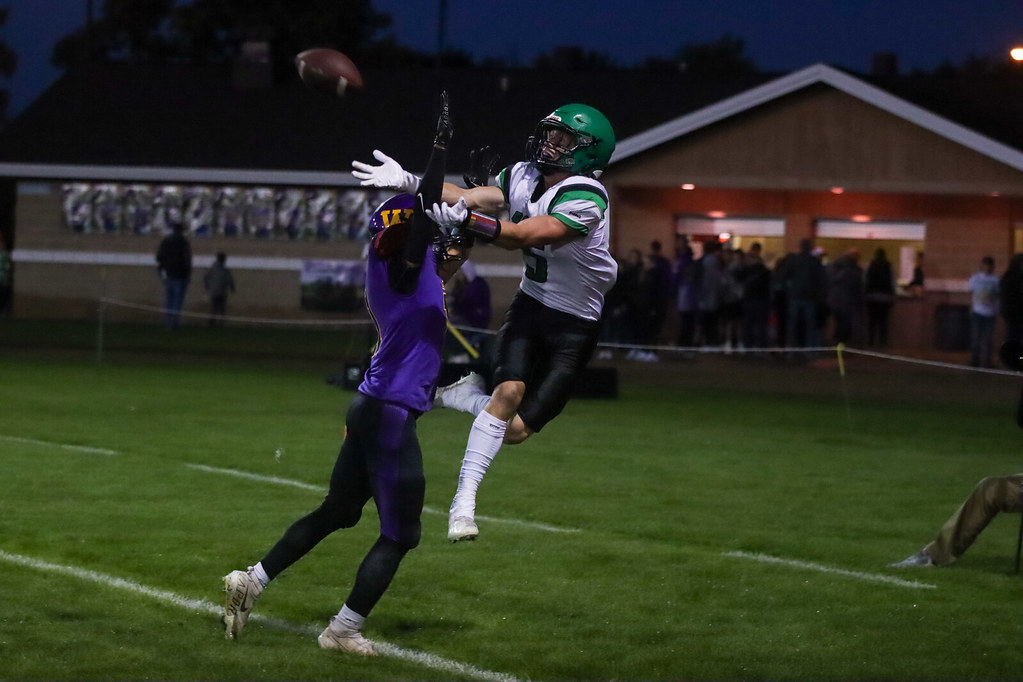 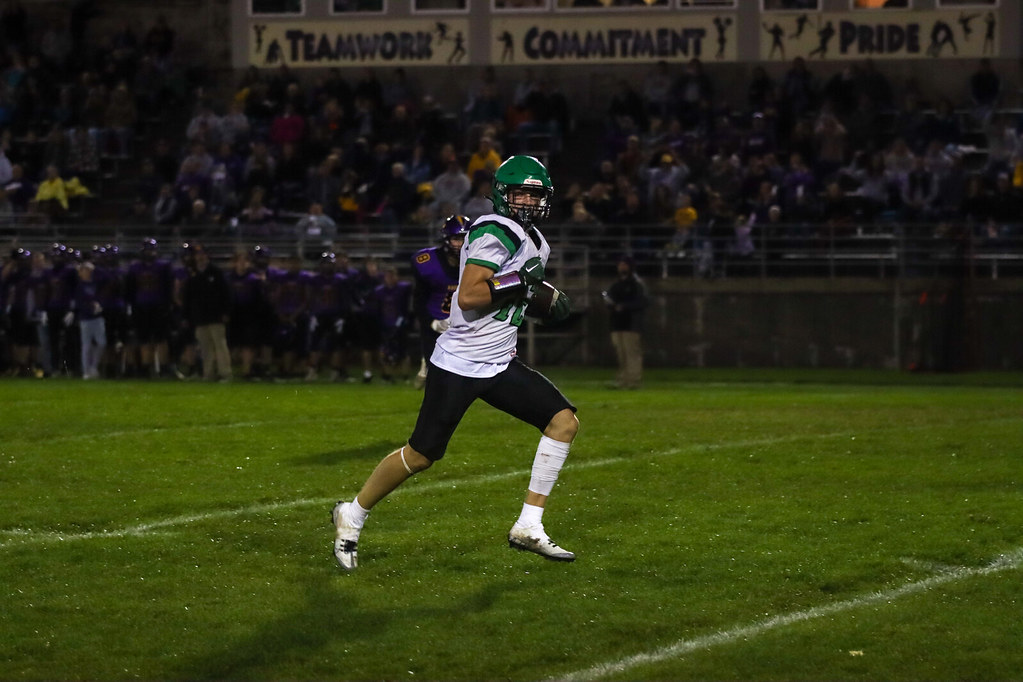 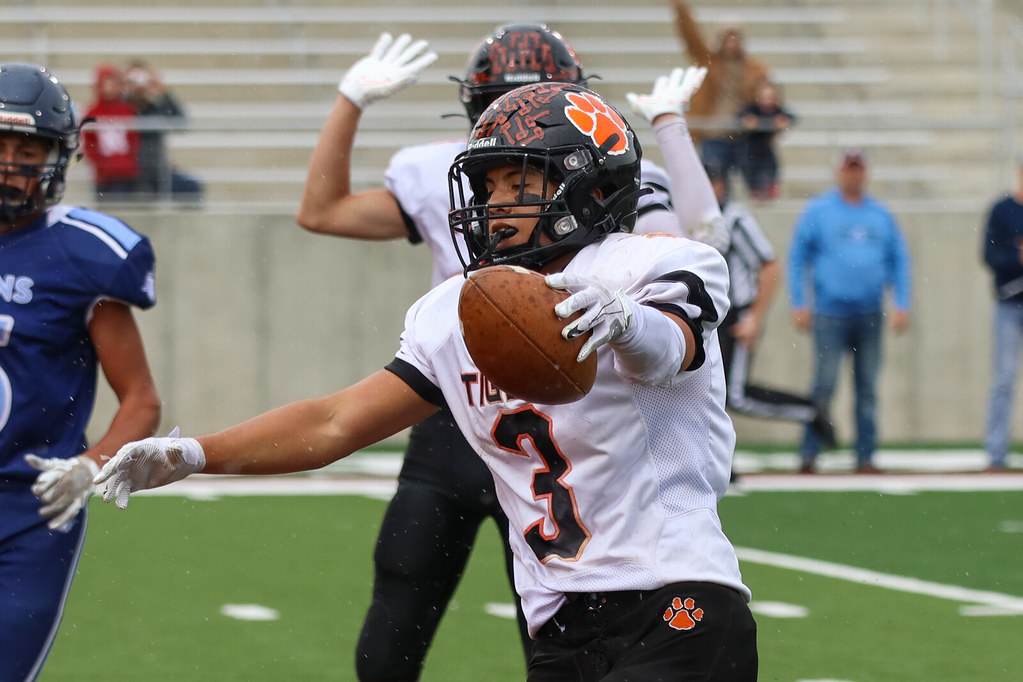 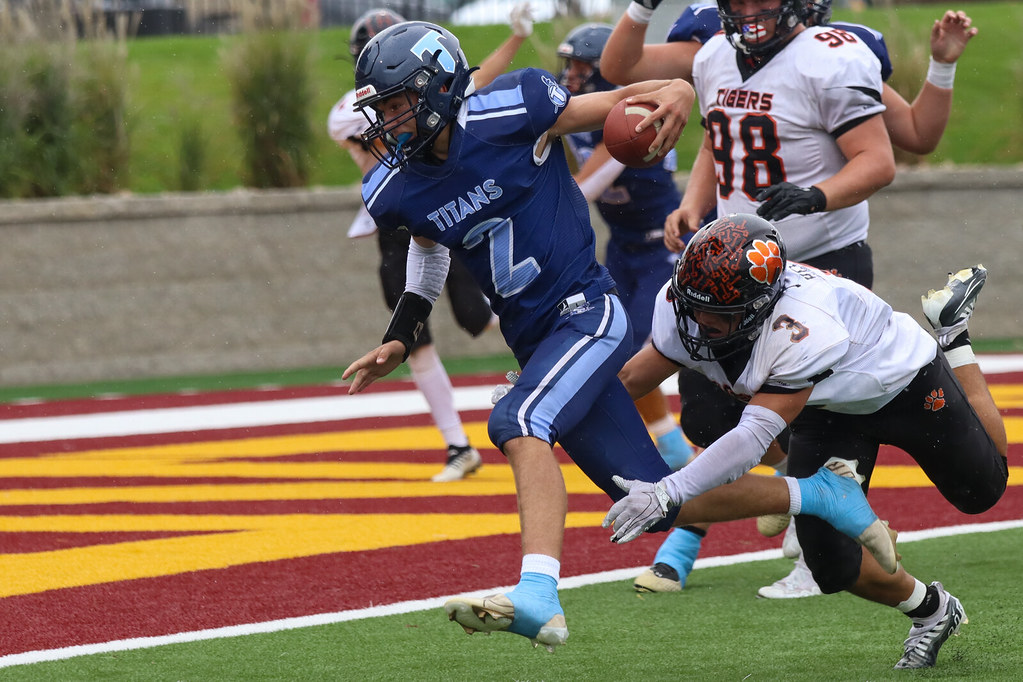 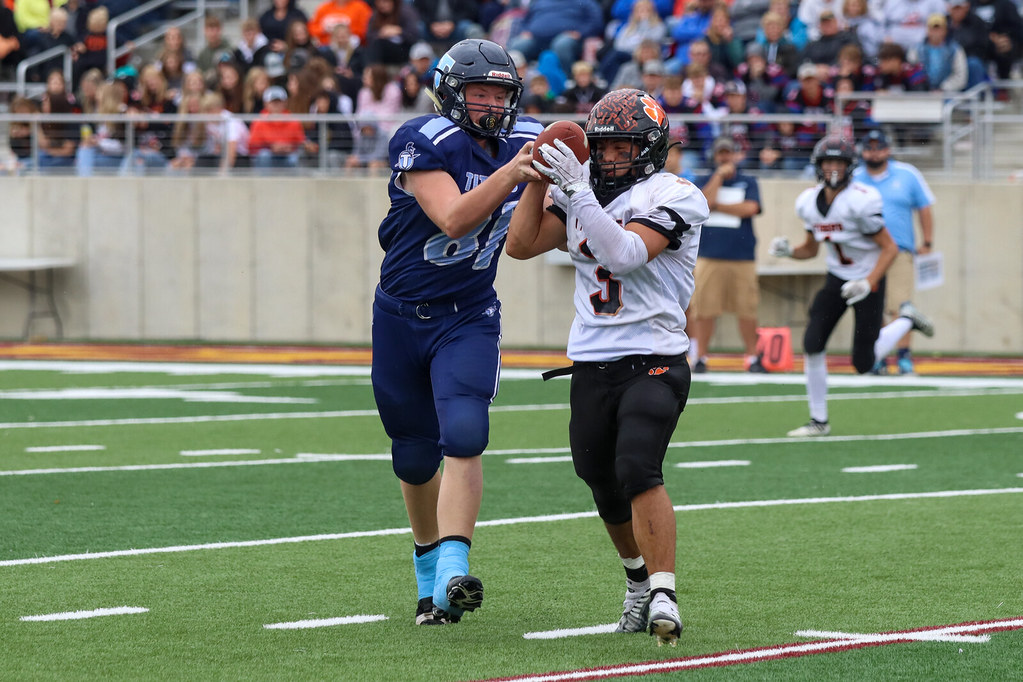 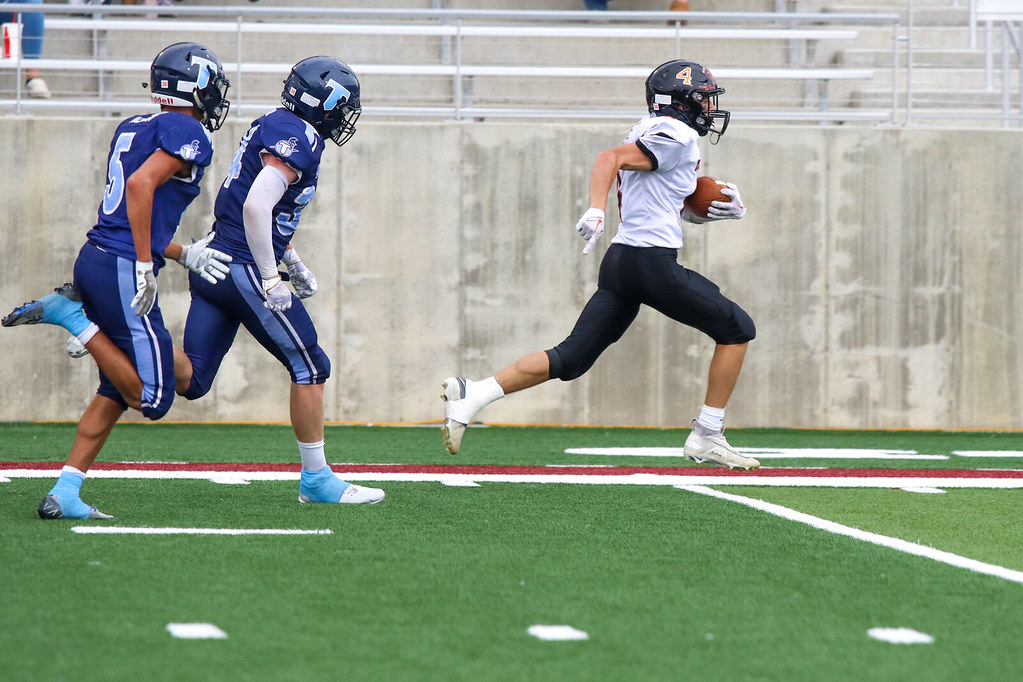 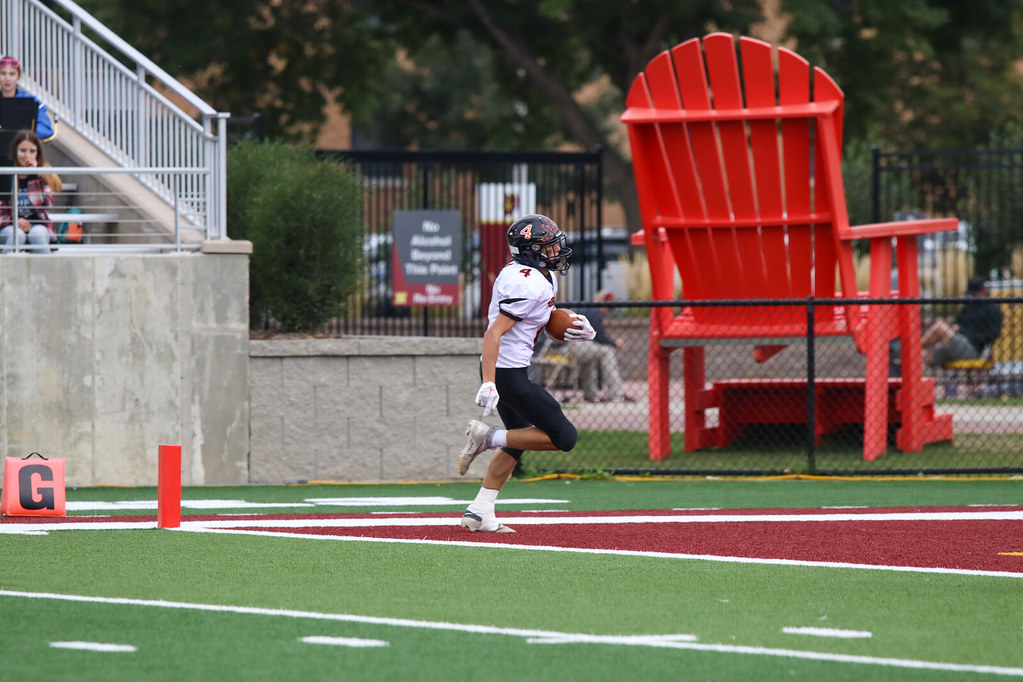 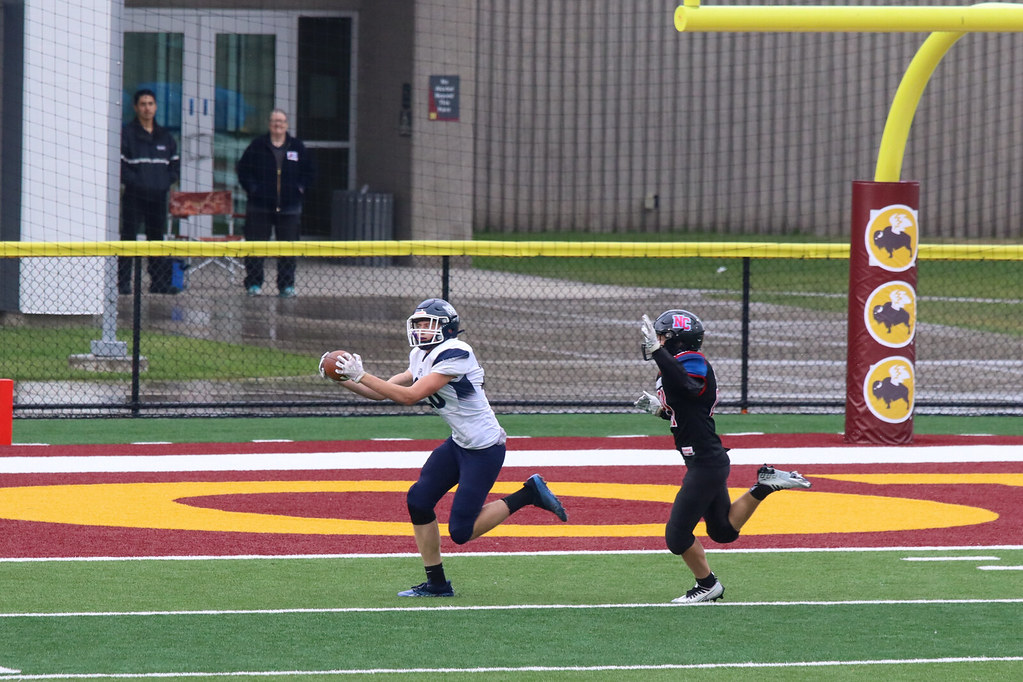 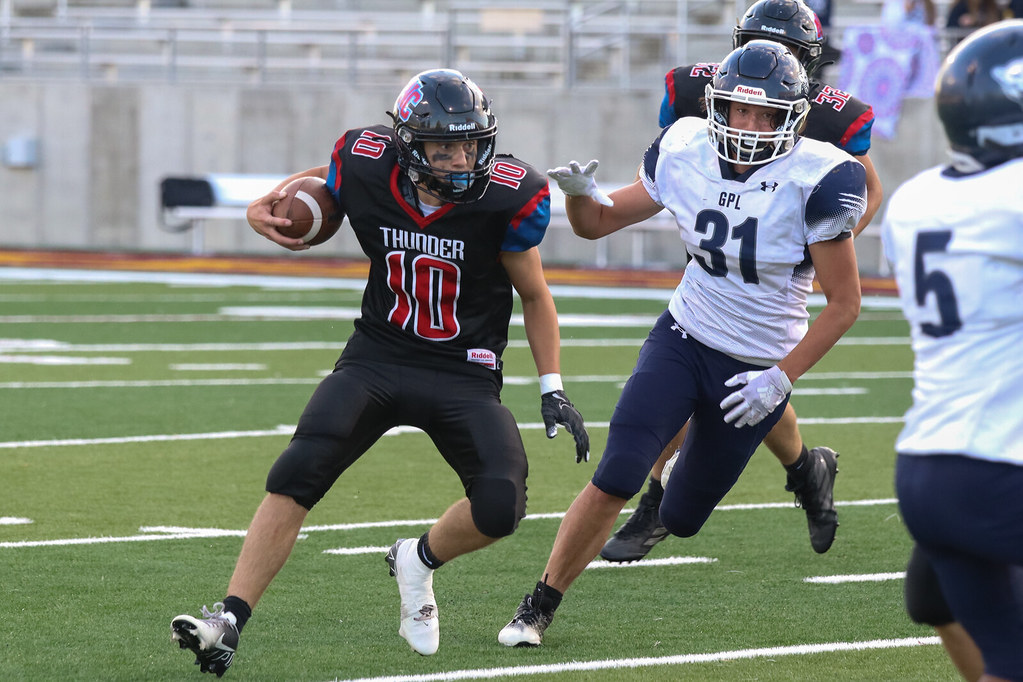 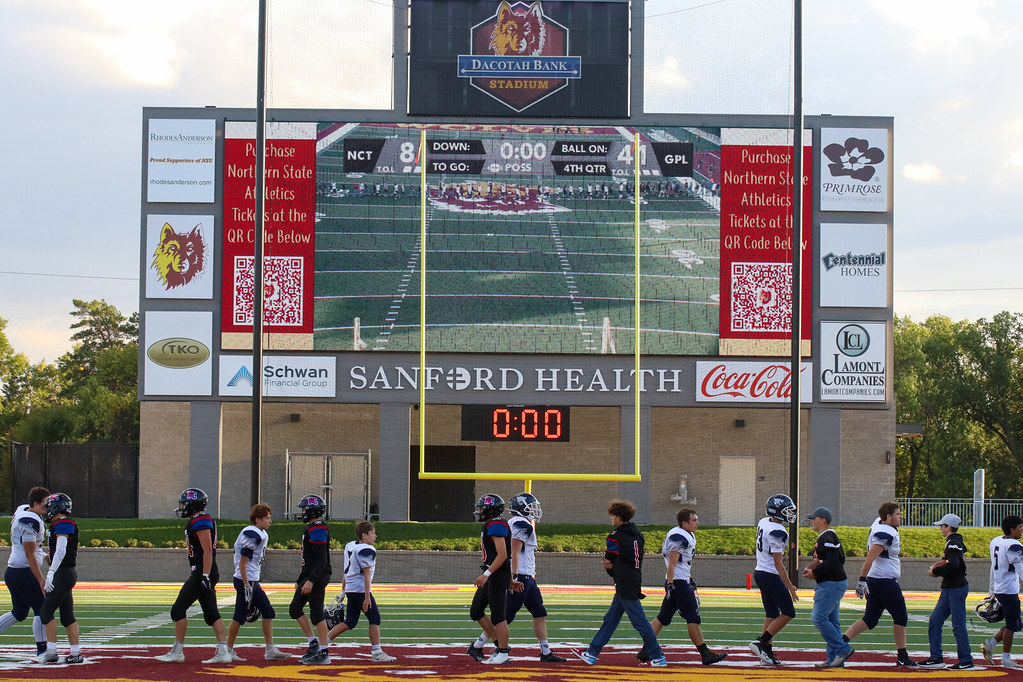 Being a part of my work related travels, the only true cost was at and during games. Gas and transportation costs were $73.92 while food was $74.79.

I’ll be back in Ohio for the weekend. Which means games in New York and Pennsylvania. I have plans Thursday afternoon. So, I may or may not see the end of a game in Akron. On Friday, I will be in Newton Falls, Ohio for their game against Brookfield. My first time there, and seeing Newton Falls. On Saturday, the afternoon contest will be in Panama, New York between CSP and Portville. While Saturday night will be a long trip east to Westfield, Pennsylvania. Cowanesque Valley and North Penn-Mansfield are sitting at 0-5, but are playing Saturday night. I was in Westfield years ago, and saw their field and wanted to see a game there. And had planned for a weekend trip east a few years ago but then a worldwide pandemic happened.