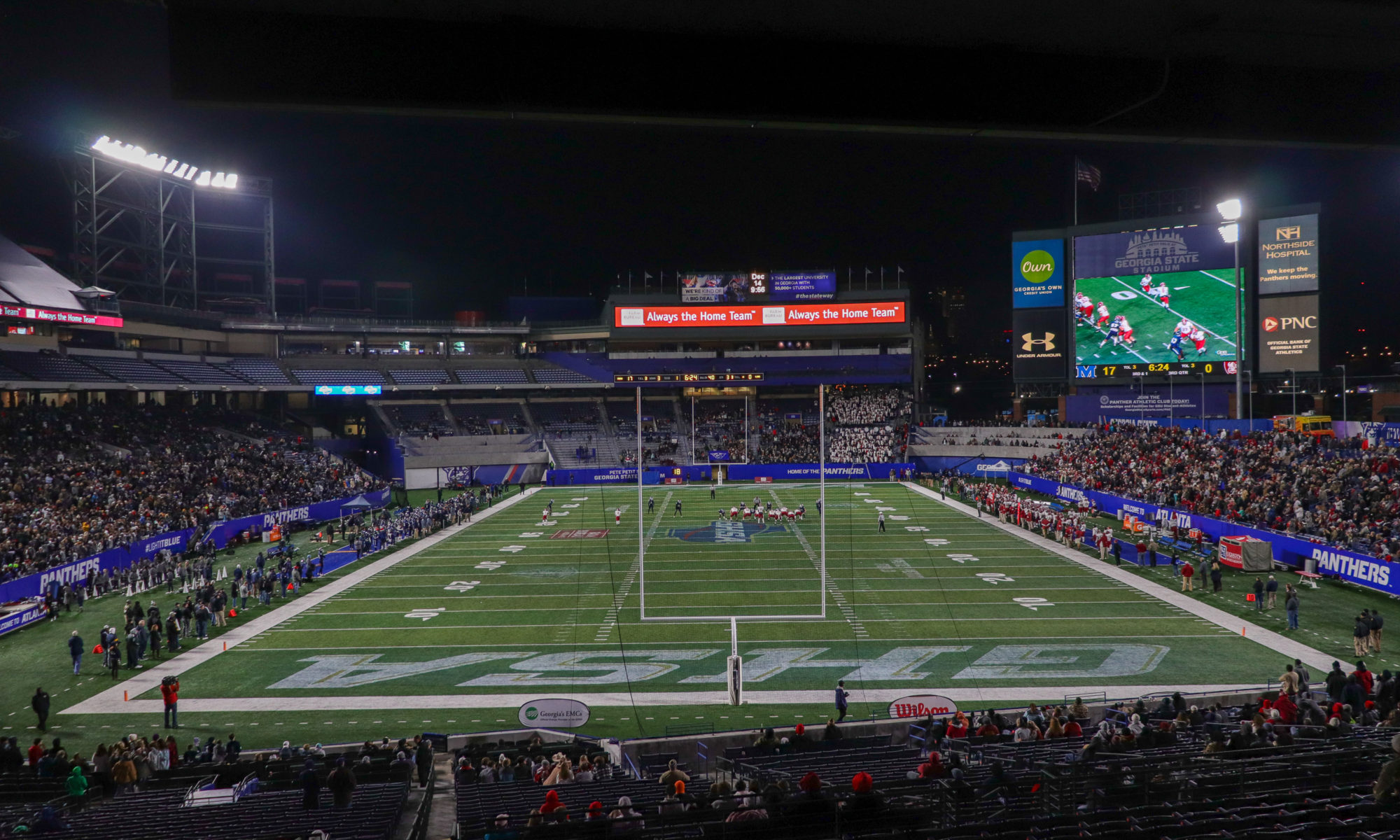 Last year, I drove down to North Carolina for three games before heading to Texas. North Carolina had three venues hosting their eight total games. Georgia, this year, had eight state titles at one location.

With the Mercedes-Benz Stadium in downtown Atlanta set to host the eight games once again. It was an easy decision. I had seen two games at the old Georgia Dome. Though going to Atlanta wasn’t going to be cheap, it was a new experience at one of the new palaces of football.

And then plans change. After having hotels booked and planned for travel, I found out that Georgia had ended their arrangement with Mercedes-Benz Stadium. Instead, the title games would be played outdoors at Georgia State Stadium.

However, I wasn’t going to drop this from my trip. I was carpooling with a friend this year and we both decided we’d give it a go. Of course, after a year of great weather for games, the Georgia games were projected to be cold and wet. Very wet. At least for Friday.

So, the drive down was uneventful. Lowellville to Atlanta via Buckeye Lake, Ohio was an easy one-day drive. Getting in to Atlanta before midnight. I did scout out a new hotel, since we were no longer going to plan to stay at a hotel on the Northside and then take a MARTA train down to the stadium. Thereby saving on parking.

Instead, we found an even cheaper hotel, nearly half priced, on the northwest side of town near the new SunTrust Park. This did mean driving the 14 miles each way each day, as well as paying for parking. And Atlanta parking isn’t cheap. Day of game, parking was $20 on Friday, while pre-sale through Ticketmaster was $10 plus fees (i.e., just shy of $15). Tickets in advance were $20, while at the gate were $23. At least you were getting four games out of it.

Shifting from MBS to Georgia State Stadium also meant the cheap concessions were out the window as well. Food was overpriced as with any other major college or professional venue.

Now, this wasn’t my first time ever at this stadium. A few years ago, I saw the Braves host the Red Sox back when it was still Turner Field. Seeing the conversion for football was different.

The entire upper deck was covered in tarps spelling out “GEORGIA STATE PANTHERS”. The dugouts were removed. But the seating had stayed the same. That meant a lot of seats would be angled in ways not that condusive to football. Hopefully that is in their nearterm plans to replace seating with seats aimed at the field and not setup for baseball.

The field runs from left field to home plate along the third base line. A new, much smaller, stand is constructed to fit between the left-center and first base/infield side for a visitor stand. It’s built quite well and uses a lot of former outfield seats. Part of the left field outfield is now the band section/student section. Turf was put down. And the scoreboard is situated to your left, over the opposing seats from the bulk of the seating bowl. The stats and down/distance are at the bottom (though not the “Ball On” marker). Though, there are stats available from the upper ring behind both endzones.

Luckily, having been to the stadium before, and with the rain forecast on Friday, the lower bowl has considerable overhang from the upper deck and that helped. Most fans found themselves standing on the concourse or in one of the few thousand seats protected by the overhang.

Though, the walk in from the parking lot still meant a lot of time to stand in the rain. A cold, cold rain for Georgia. I spent most of the first day in shorts in a tee shirt because I was absolutely soaked, rain coat or not, in the short walk back and forth from the car. Eventually I dried out enough to put my jacket back on.

Now, Georgia seperates their state into seven classes. 1A through 7A. Due to the large number of small private schools, of which dominate the tournament, the 1A class is separated into 1A Private and 1A Public. Only 1A is split. There doesn’t seem to be much issue with private school domination at higher classes. There aren’t the giant Catholic schools in the major cities like you see arond the Rust Belt or Northeast. Outside of 1A, there was only one private school in the six other classes playing this weekend.

For the game itself, Wesleyan had two field goals in the first half, in the rain, and held a sliver of a chance at upsetting ELCA. However, ELCA scored on an 87 yard run on the second play of the half to take a 7-6 lead. And four TDs total in the third quarter put it away. Down 33-6, Wesleyan did manage one more TD with under 3 minutes left to make it 33-13.

With games starting at 10am, 1pm, 4:30pm, and 8pm, meant a quick turnaround for the second game. This was a back-and-forth game as touchdowns were traded early, before Dublin had to settle for a field goal. Trailing 14-9 at the break, they scored early in the third to go up 15-14 before some back-and-forth saw it 28-26 late in the third. But Dublin would pull away at the very end with a 19 yard TD run. Winning 42-32.

Of the 16 teams playing this weekend, Buford is the only one I’ve seen play before. I saw them play Calhoun several years ago at the Georgia Dome in a state final. Back when the state only had five finals. And like that game, this one also ended in overtime. Buford trailed 14-7 going into the final frame, and scored on a 22 yard TD pass with 27 seconds left. In OT, Buford stopped the Demons on their drive with a pick, and then scored on a 24 yard FG to win the state title. One of many (12) for them. And first since 2014.

The nightcap of a day of rainy football included a deluge at one point. The two teams playing for a state final bordered one another. And when Allatoona opened in 2008, they actually took part of the student base formerly included in Harrison’s territory. Both schools are members of Cobb County School District. So, these two know one another. Harrison started with a 3-0 lead, a 10-7 lead at the break, and with two more TDs in the third to lead 20-7. The fourth quarter was scoreless and the Harrison Hoyas won their first ever state championship.

After the game, it was a drive back to the hotel, a stop at Waffle House, and then a quick turnaround for 10am the next morning. Because the ticket office couldn’t sell tickets for the next day on Friday, meant another stop at the ticket windows before the game.

The kickoff on Saturday was the other 1A game. This between two small county schools. As you may have realized, Georgia is like many other states that have “County School Districts”, such as Tennessee and Kentucky. Unlike PA or Ohio, which have districts that are divorced from local government. And, Georgia has the second most counties in the country only next to Texas. And Georgia is much smaller than Texas. So, a lot of small counties exist. Irwin County is a prime example. An easy victory by the Indians over the Eagles.

Crisp County is located in and around Cordele, a major watermelon producer in southern Georgia. Appropriately named, the Crisp County was playing defending championship Cedar Grove from suburban Atlanta. But, despite a close game, it was clear the Cedar Grove Saints–a public school–were the better team all day.

The lone private school outside the 1A Private game, the Blessed Trinity Titans had a close, 10-7 lead after scoring with 1:21 left in the first half. And then quickly got the ball back and scored again with 16 seconds left. Extending a 17-7 lead that they held throughout an entirely scoreless fourth quarter.

The nightcap of the GHSA season, was a lesson in contrast. Marietta had gone 52 years since their last state title. While Valdosta Lowndes had five titles, as recently as 2007. Both sides brought sizable crowds. With Marietta just being a few miles northwest of Atlanta.

As you may have caught on, Georgia has been a great field goal kicking state. In 8 games, there were ten field goals. This game had two more. But, despite being a ‘close game’, Marietta was just able to distance themselves enough from Lowndes and win their first title in over half a century.

After that, it was back to the hotel and get ready for a trip to Texas… 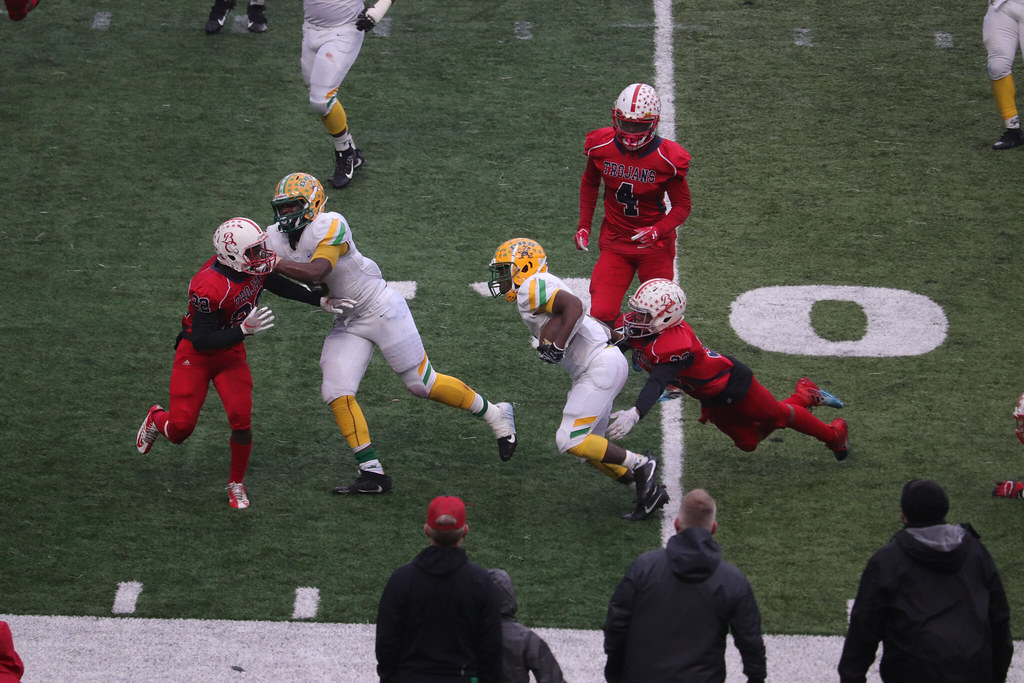 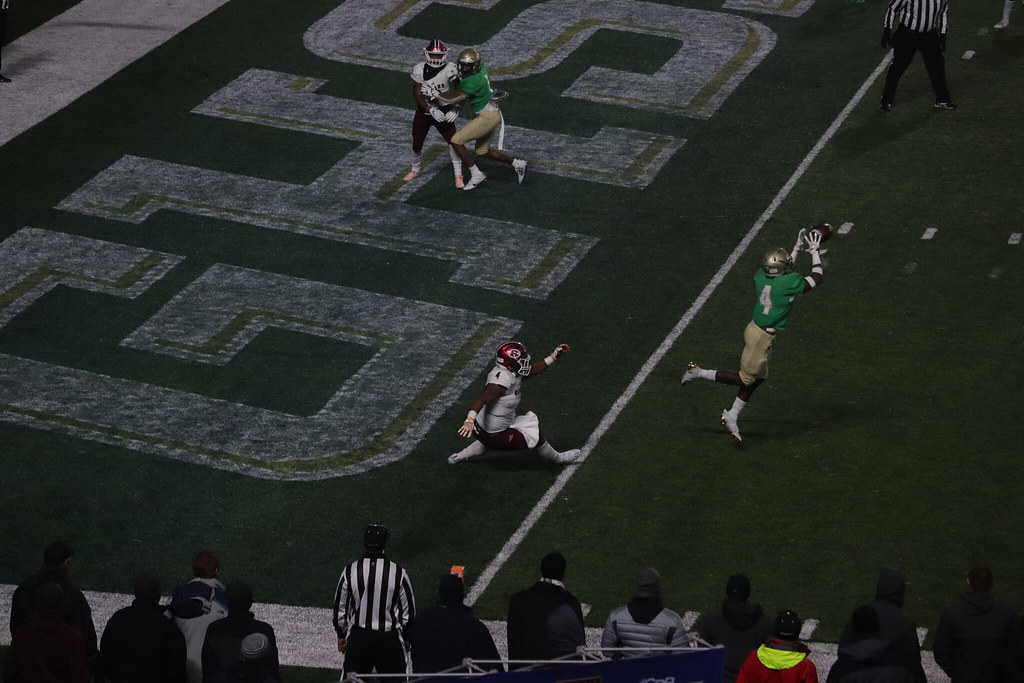 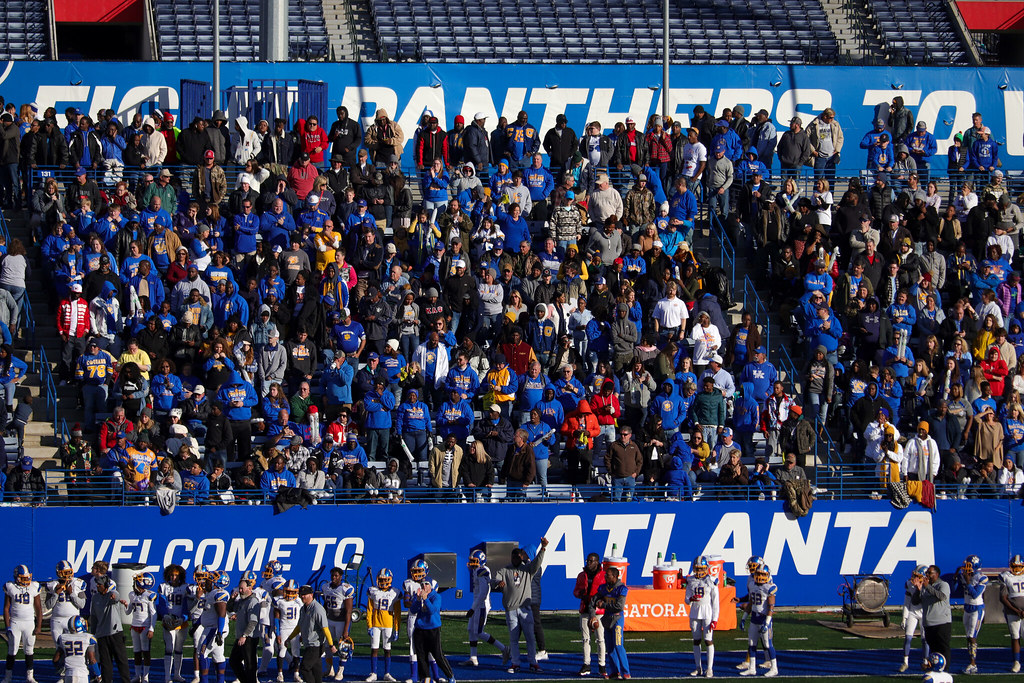