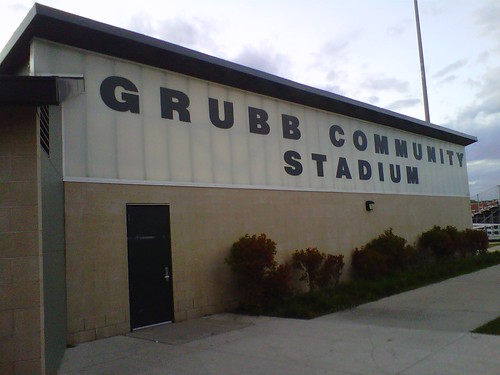 I had a couple of games to choose from, and none of them looked to be real good bets. North-Lincoln was the closest. I also could have went down to Drake Stadium to see Roosevelt-Hoover (and also could have caught their freshman game right before it), two teams that had one win between them. I could’ve gone up to Urbandale to watch them play Southeast Polk (hindsight is 20-20, as this was the best game). There was a few others.

Brugg Community Stadium was just rebuilt, from what I was told this year, and the stadium is nice. It’s small. For a 4A (highest level in Iowa), it is miniscule. Lincoln didn’t fill the away side, and sans the kids and teenagers running around by the endzone fencing, the North side didn’t fill theirs, either.

The Polar Bears had a very vocal, committed student fan base who cheered and stood most of the game. It didn’t help. Lincoln (3-2 coming in) was light years beyond North.

Two plays into the game, Lincoln had scored their first of what would be many touchdowns, 7-0. Two long runs. After the kickoff, North threw an interception on first down. Very next play, Lincoln scored another long TD run, 14-0 less than 90 seconds into the game. Lincoln scored again on a long run halfway through the first, 21-0.

Now, this is where we entered bizarro world. North finally was driving and got the ball into the Rail Splitter red zone. With 8 seconds left, North threw a pass to the right front corner of the endzone that was read perfectly and picked off. A foot race ensued between the corner and the QB, which the lightning team speed of Lincoln was on display. One hundred yards later, it was a touchdown for Lincoln. But, there was a flag for a penalty I didn’t see around the 50. Now, the time is out of the quarter. So, they should switch ends, and start the second quarter.

But not in this case. The refs simply spotted the ball after marking off the yards for the infraction, the clock was changed to 12:00 and a play was run by Lincoln (a long run, go figure). Then, with the clock reading 11:39 after ticking down, the refs blew the whistle, and announced it was the end of the first quarter. The clock was reset to 12:00, the ends of the field were switched, but with the phantom Lincoln play still counting. The next play started at 12:00. More than a few people were confused what happened, obviously.

It was North’s homecoming game and the fans seemed oblivious that Lincoln was up by at least seven scores. The second half was an exercise in futility. Lincoln finally subbed their backups, and North kept trying. But, to no avail. With Iowa’s relentless running clock, the second half was over in less than 30 minutes. Lincoln had two chances to score but their backups were stopped on fourth down on two separate drives.

The fans were excited at the end for the announcement of the 50-50 raffle winner, who got to take home a whopping $65, the lowest total I think I’ve heard, especially for two schools from a state’s largest classification.

In the end, it was fun. But most definitely a very uneven matchup.

North is just not a good team. Very sloppy with the fundamentals. Limited athletic ability. And a rather ‘slow’ team. Their running back had some moves, but had no one to block for him and kept dancing around in the backfield losing yardage while trying to find a seam to take.

Lincoln, on the other hand, had a ton of speed. Their primary running back had serious quickness to the outside every time he touched the ball. Throw in the fact his offensive line absolutely decimated the defense in their wake, he had many easy long runs down the field.

I found the stats of the game.

Lincoln’s Kippie Ward rushed for 198 yards and KeeVon Bernstine added 134, with both runners getting eight carries in the Metro Conference game at Grubb Stadium.

The Railsplitters’ Roy Patterson had a 42-yard interception return for a touchdown.

As for my final impressions of Iowa. I know this game is not a good indication of the state as a whole. This was two city schools playing each other in a small stadium (Grubb Stadium, on campus), that aren’t that good overall. But, for the highest classification in the state, the small rosters, very small stadium, and general lack of footballing prowess by both coaching staffs (it was a vanilla system against a vanilla system where the pure athletic ability won out).

Still, it was fun, once again. This is my third straight week out and about this great country and able to make some time for some non-Ohio high school football.

I saw the Rally at the Wolvarena and the Kirk Herbstreit Kickoff Classic along with Richmond Edison at Martins Ferry in Week 2. Then:

Next week, I’ll be home in Ohio when Steubenville travels to Massillon. I’ll also try to catch a game on Saturday somewhere. Either high school or college.

Who knows what after that.