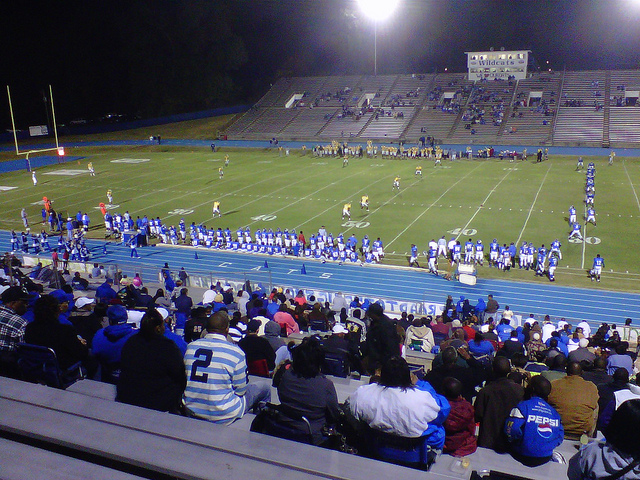 I had a pick of several games today, and none of them were particularly high impact matchups. I decided on Meridian-Jim Hill due to the fact Meridian was a high powered team (#176 by Calpreps) on the verge of going 10-0 on the season. Jim Hill, on the other hand, is at the other end of the spectrum. Hailing from the capital, Jackson, they were 1-8 and not very competitive in general.

It was looking to be a blowout from the start, but destined to have some fireworks. The cab driver on the ride over mentioned that Meridian was going to wipe the floor with Jim Hill. He proved to be prophetic.

The high school was situated in the north central section of town in an entirely residential area. The school itself looked brand new. To the south was the gymnasium on the southeast corner of the football stadium. The east stand sat right along a driveway across from the school. To the northeast corner was another school building towering over the stands.

Ray Stadium holds 14,000 fans, but had roughly 2,000-3,000 in attendance by my guess. It’s a massive concrete structure that has seen better days. Sitting in a depression, the stands barely rise much above the level ground by the school building. The section entrances take you in twenty rows up from the field. The bottom of the stadium is a concrete wall and then the track. Inside the light blue track, the field is sunken further roughly three more feet. Pristine grass looks barely worn.

The opposing stand holds the same setup. Roughly 40 rows going from goal line to goal line. A fluke, is the press box is on the visitors’ sideline. In addition, the middle sections of the each stand is sectioned off for various use. There is no access between section to each other without scaling the fence. I was never quite certain on which spectators had to sit where as it seemed to be mixed between students, faculty, visitors, etc.

Jim Hill received to open the game and proved from the get go that they were in over their heads. On the first play, they fumbled the ball over to Meridian. Two plays later, Meridian got on the board, 7-0. To my dismay, there was no game program or roster sheet available despite the $7 ticket price. Because, the points were going to come quickly and I have no idea who did what.

On Jim Hill’s third down on their second drive, their QB fumbled into their endzone. Meridian recovered in the endzone for the touchdown, 14-0. On the next drive, Jim Hill fumbled on third down, yet managed to recover deep in their territory. A short punt setup Meridian for another easy touchdown, 21-0. Jim Hill then punted from the endzone, but it was blocked and Meridian recovered at the one-yard line. First down was stopped short and the first quarter came to a merciful end.

Second down resulted in another touchdown on a QB run to the left side, 28-0. Jim Hill then had a third down pass dropped by the Meridian defender. The fourth down punt was blocked and Jim Hill’s blocker recovered it but was stopped in the backfield to turn over the ball on downs. After first down, Meridian faced a 2nd and 11 from the Jim Hill 17-yard line. A perfect pass to a wide open receiver down the middle made it 35-0.

Jim Hill’s next possession resulted in two great highlight reel moments. The first play was a defensive gem by Meridian. Decimating the offensive line, Meridian had two lineman running full speed at the quarterback frantically trying to run to the right side. Grabbing him before he could throw it away, they lifted him off the ground and as his momentum changed, he was parallel to the ground about six feet off of it. A hard fall to the ground left him in shock on the turf. His teammates helped him up and he was no worse for wear. On third down, came Jim Hill’s inability to play coherently. Backed into the shadow of their own goal posts, Jim Hill’s QB ran back into the endzone and threw a screen to the upback in the shotgun formation. Unfortunately, a streaking lineman for for Meridian stepped in front of the lateral and got the touchdown. The first stop of the night for Jim Hill came courtesy of the left upright as the PAT clanged hard, 41-0.

Now, Mississippi has some good bands. Jim Hill, I’ve read, and got the privlege of seeing, is a great band. Meridian wasn’t bad, either. A very entertaining and lively halftime performance that made it worth sitting through the twenty-minute segment.

Meridian came out determined in the third quarter and drove the field quickly. A third down had a long TD (30+ yards) to make it 48-0. Without a mercy rule, the clock ran slowly to end the game as both teams were subbing in their backups.

Meridian threw an interception on third down before Jim Hill started driving the field with some determination and wherewithal. A seven-yard touchdown run broken the goose egg for the Tigers and a 1-yard run on the PAT after a penalty made it 48-8. Meridian tried to run the clock, but had to punt with only 9 seconds left. The final play was a hail mary that was almost intercepted.

With the game over, the bands (who played throughout most of the game) played for roughly half an hour after the game as the fans trickled out slowly. It was a nice old, albeit very large on-campus stadium. A great team that has a legitimate chance to beat South Panola (#1 team in the state).

Now, Mississippi only has 32 teams in 6A (the newest highest classification as of 2009). The state is split into four regions and the top four in each region make the playoffs. Not exactly the most difficult of setups, but the state and fans seem to be okay with it. It’s just a shame it is as difficult to win the state title in Mississippi as it is a Regional Championship in Ohio.

In other games, Cochranton (PA) has put together a winning streak, winning 33-14 at Youngsville (PA). They are now 2-7 on the season and finish 2-6 in PIAA District 10, Region 2. They finish the season next week at Our Lady of Lourdes Regional.

As the season moves on, it will be much more difficult to find games to go and see. But, as I’ve managed the past six weeks, I think you can find me somewhere in the country next Friday watching a high school game.