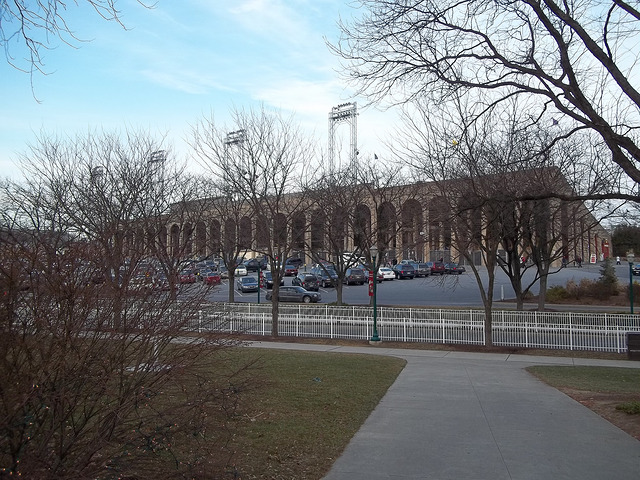 It was by sheer happenstance that I found myself in Hershey, Pennsylvania on Friday morning. I didn’t plan it. It just sort of all came together like a dream. But, there I was, sitting in the parking lot next to the aging Hersheypark Stadium at noon.

This is my first time seeing the PIAA championships. Since 1998, they’ve been played at Hersheypark Stadium in Hershey, Pennsylvania. In case you’re not catching the subtleties, this is where Hershey’s main headquarters are. They also operate two arenas (the old Hersheypark Arena) and the brand new state-of-the-art Giant Center (named after the local grocery store chain). There is an amusement park here, as well as Chocolate World, an indoor tourist trap for all things Hershey.

If you’re looking for 5-pound Hershey bars or half-pound Reese’s Cups, this is your place. The only problem is, this stadium is in horrible disrepair. Similar to its aging brethren, the stadium has easily seen better days.

Pennsylvania has four classifications and have two games a day on Friday and Saturday. Friday starts with Class A at 2pm and Class AAA at 7pm. On Saturday, they kickoff Class AA at noon and Class AAAA at 5pm. One ticket was only $8 for an all-day ticket. When you go to leave, you’re simply handed another ticket stub to reenter with. After entering, I bought the game program for $5. Not as nice or in-depth as the OHSAA or even the MSHSL program. It is better than some you could imagine, however.

Unlike Ohio, the PIAA alternates which team is home or away giving the east and west participants a chance to wear their home colors. This year, the Western Champions get 1A and 4A as home teams, while 2A and 3A are on the road.

Now, Pennsylvania is very compartmentalized. The state is broken into twelve autonomous districts. Their only requirement is that they produce a champion at a set point in the state calendar for the required classification. This makes for some interesting quirks in the playoffs. For instance, District 8 is the Pittsburgh City League and is made up of nine schools. They get to crown three champions; to AAA, AA, and A, respectively. They play a semifinal and a final. The champion qualifies for whatever classification they are. Then, the best team in the other two classifications also advance to the state round. So, in affect, a team that loses a first round playoff game can qualify for another playoff game two weeks later.

District 7 is the Western Pennsylvania Interscholastic Athletic League, and currently has 126 football playing members. They only get to crown four champions. They play a full 16-team tournament for all four levels and their champions enter the state playoffs during the quarterfinals. The WPIAL is the most represented of the state, bringing three teams to Hershey.

The state is roughly divided to the east and west and the two only meet in the title game. In recent years, the Philadelphia Public League and the Philadelphia Catholic League joined the PIAA as the new District 12 (although they both act independently as sub-districts, I guess nobody wanted to be unlucky #13). The public champion and the private champion playoff against eachother in the District Final.

Due to this influx of very large teams from the Philadelphia area, this has shifted the enrollment numbers across the board. Especially in the western half of the state that has fewer schools, and most definitely on average smaller schools. District 10, for instance, has only one AAAA team. As does District 9. District 8 (Pittsburgh) has four. District 6 has one (DuBois, who plays the District 10 AAAA school in a play-in game every year in the first round, regardless of record). Only District 7 (WPIAL) has more, with 26 currently.

This has caused the state to shift District 3 (Harrisburg area) to the western bracket in 3A and 4A, which comes into play in the 3A game this year. Another thing of note, before I begin, is that Pennsylvania allows schools to play up. In years past, Harrisburg Bishop McDevitt (251 boys, currently would be AA) has played up to 4A. This year, however, they opted to only play up to 3A.

This is the District 3 AAA school list. Note the enrollments and you can easily spot who has moved up. 3A is between 311-512, while two private schools have elected to play up voluntarily to a tougher level. As I mentioned, this is the first year Bishop McDevitt has elected to only play in 3A, rather than 4A. It also is their first trip to the state finals.

Clairton came in as defending state champions and had only give up 34 points all year. Riverside came in as the decided underdog. Only problem was that nobody told the Riverside Vikings they should be cowering in the corner.

Riverside jumped out to a 24-0 second quarter lead. It was at this point the sleeping giant had awoken from his slumber and the Clairton offense got to work. 24-8. 24-14. 24-20. And then right after halftime, they took the lead, 28-24. As the game progressed, Riverside fell into a funk. At one point, they were forced to punt on 4th-and-57. The punt netted only about ten yards. Clairton scored again, 36-24. With little time left, Riverside scored to make it respectable, 36-30. Clairton had a chance to run out the clock before the TD, but the QB inexcusably ran out of bounds while trying to run out the clock. But, it was over. Clairton repeated as state champions.

After the game, I went over to Chocolate World and looked around for a while.

This was McD’s first season in AAA. This also was their first title game appearance after years of getting up-ended deep in the Western playoffs. This game was evenly matched and had easily the highest attendance. Harrisburg being a mere 20 miles to the west and Allentown being roughly 70 miles to the east.

The teams traded touchdowns until it was 21-21 in the fourth. Bishop McDevitt then finally got the lead, 27-21 after missing the extra point. Central Catholic then drove the field, quickly with a 70-yard pass on third down and then an 18-yard touchdown run by their quarterback to tie the game. The extra point was good and Allentown Central Catholic held on to win, 28-27.

The next day I was back at the stadium again. With the noon kickoff, there was warmer weather for the early game.

South Fayette came into this game undefeated and on top of the world. West Catholic came in on a three year run champion, east runner-up, and another championship participation. South Fayette opened the game with a long drive to take a 7-0 lead. There would be no joy in Mudville, however, as South Fayette struck out down the stretch. West Catholic rolled in this one and it wasn’t nearly as close as the score. This was the only title to invoke the mercy rule. West Catholic 50, South Fayette 14.

As the cold weather descended, the stadium was overtaken by the black and yellow clad North Allegheny fans of Wexford.

LaSalle College High School came in on top of the PIAA world. Defending Quad-A champions, they rode a wave into the title game and faced meager North Allegheny, a school that had just one title appearance in 1990, when they beat Ridley, 21-14.

North Allegheny Tigers scored once in the first, once in the second, and once in the third to take a commanding 21-0 lead. North Allegheny was 1-of-7 passing for 30 yards and 44 rushes for 220 yards. LaSalle lost the game on their own with three fumbles while losing two. They also threw three interceptions.

Now, for the games themselves. After watching the OHSAA and PIAA titles, OHSAA would sweep all four titles. St. Edward over North Allegheny. Maple Heights over Allentown Central Catholic. Youngstown Ursuline easily over West Catholic. And Delphos St. John’s over Clairton.

I really don’t doubt a sweep would happen. ACC would give Maple Heights a game, but that would be about the extent of the competition.

Now, for the part where Ohioans can brag. The PIAA has had their games televised for many years on PCN (Pennsylvania Cable Network). The rough equivalent of C-SPAN for Pennsylvania. The announced attendances were horrid. True, the western fans had a 200 or so mile drive, but the eastern fans didn’t bring anybody as well. Especially the catholic school fans. Only McDevitt brought a crowd for a veritable home game.

I only heard the PA announcer on the 4A game. I cannot find it documented anywhere, but it was in the 2,000-2,999 range that was quoted. They were very small crowds overall for a stadium said to seat 16,000 yet I counted up only enough seats to possibly sit 13,728 (16 sections, 26 rows A-Z, 33 seats per row). Throw out the seats confiscated for the pressbox, light poles, and auxilary press/coach seating, and I figure 13,400 would be a good rough estimate for seating capacity.

There is only seating on the sidelines. The stadium starts at the north endline and the first seven sections on each side extend to the south endline. There is one more section entirely beyond the south endline on each side. As if the field had been repositioned previously. The press box is located, from south to north on the west side in sections 5 and 6 (1 being the seats beyond the field). Definitely an odd setup. Then you have the large overbearing black stage sitting just past the north endzone.

Next complaint I have is the field in general. It is A-Turf, a artificial turf that is used for almost all PIAA events. I counted five different colored lines on it for football (white), soccer (yellow), lacrosse (maroon), field hockey (navy blue) and one unknown sport/alternate layout (carolina blue). This really clutters up the field. The PIAA painted their initials in the endzones, but unfortunately, they faded out by the end of the last game. the “Big 33” logo at midfield is still vaguely visible as a ghost image from a game played before the season ever began.

And the other issue is the proximity to the field. The soccer field has a full-width regulation field. So, from the sideline for football to the edge of the turf is about 8-10 yards. then, there is another 10-15 yards on each side of the field before the concrete finally hits the elevated portion of the stands. To get a good view, you definitely need to sit up high.

The stadium served regular overpriced fare to go along with the general overpriced theme nature of the tourist trap it was held in. The stadium is old and makes PBTS look modern. The concession stands are merely carnival trailer stands parked under the bleachers. There is no usable concession windows actually in the stadium anymore. The bathrooms come with one sink, ten floorinals, and two or three stalls each. Good thing most people didn’t follow through with washing their hands, else there would’ve been a line there.

Now, the one caveat to this is that parking for the games is free. Even though Hershey charges parking for their complex (two arenas, stadium, Chocolate World, amusement park, Candy Lane, etc), if you were attending the football games, they let you in for free. Which was nice. It was relatively quick getting in and out and there was a gigantic parking lot to accomodate the entire crowd.

The fan support of the teams was minimal at best. Only the 3A game had a good crowd and that was, as mentioned, because Bishop McDevitt was so close to Hershey.

And, so with that, I’ll close my write ups for games this year. I will post some statistics and some more in-depth final thoughts of the games this year that I’ve attended.