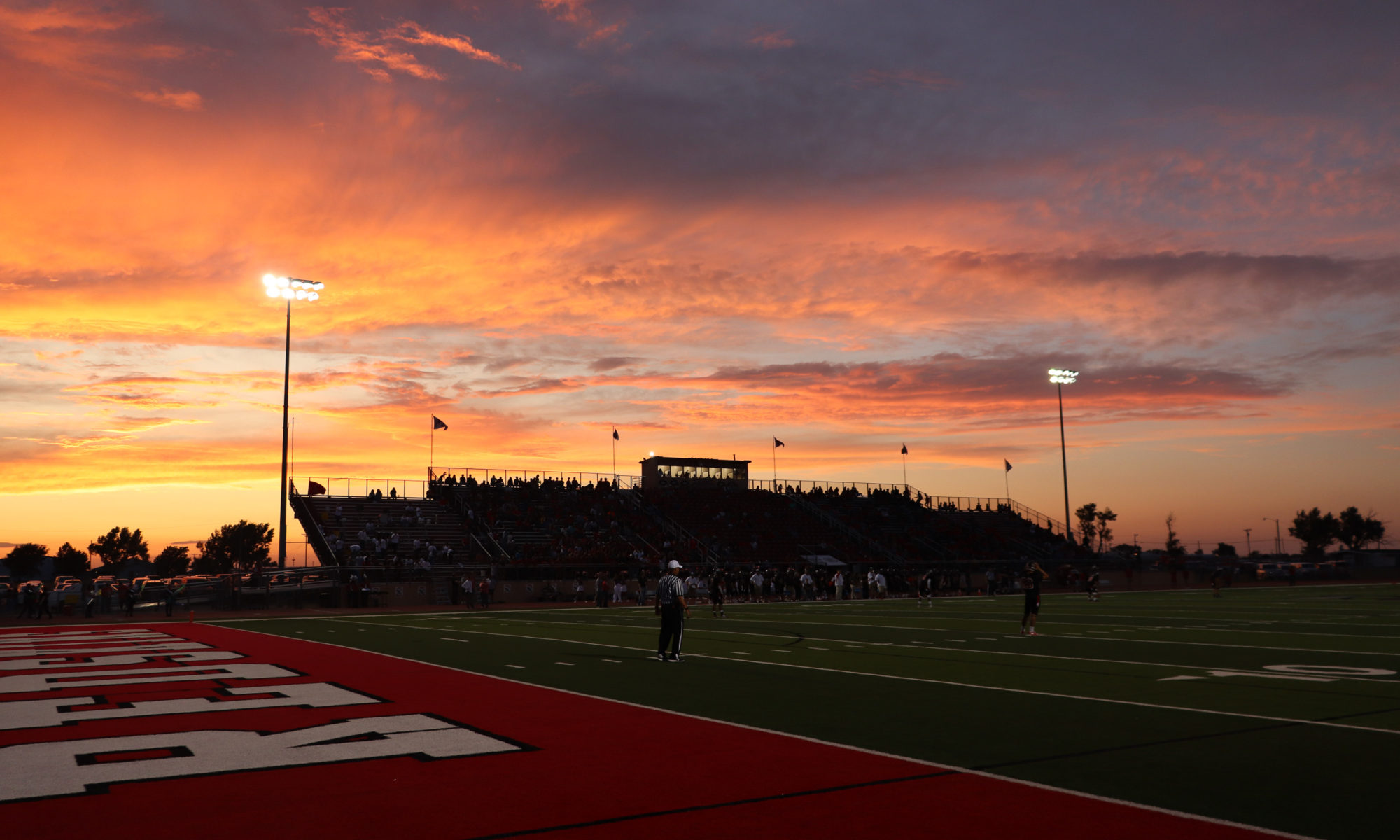 Well, I got out to the Sunflower State like I planned. In the process notched State #37 to my all-time list with two games. With a lack of Saturday games, my only options were in Texas and luckily I made the most of it with two games Saturday evening only about an hour apart. Both six-man games in vastly different settings.

First and foremost, Kansas is an interesting state. I had been to or through the state before, even seeing an MLS game in KCK, but never made a stop for a high school game. Unlike other states, Kansas spreads around their state finals and are played almost exclusively on the same date. Major colleges such as Pittsburg State, Fort Hays State, etc (not the giant universities) play host to the finals. The only shot at multiple state titles are the two 8-man games which are played as a doubleheader at Newton. So, the next option, if a playoff or state title block of games is out-of-the-question, is to find a regular season weekend.

Now, Kansas, like several midwestern states, doesn’t usually have Saturday games. Around the major cities, however, they will have a few Thursday games. Two games around KCK and two around Wichita. There was also a solitary 8-man game in the small town of Dighton.

Dighton was my choice. Especially since they were playing St. Francis, which is a small town I’ve actually eaten at a Pizza Hut on my travels, and is the furthest northwest town you can get to in Kansas. However, St. Francis is really good. And Dighton… isn’t.

And luckily I checkec up on Kansas’s mercy rule because in 8-man football they have a 45-point rule just like Texas 6-man. Any time the game is 45 or more points margin in the second half, it’s over. And it wasn’t looking to be close.

So, I stayed to the south of the state, and had a pick of two games. Wichita Southeast v. Wichita North and Andover v. Goddard Eisenhower. Honestly, the Wichita game was just closer by a sliver and I thought it would be more interesting to have seen a game in Wichita than a small suburb named Andover.

The Andover game still turned out better, 20-14 after being 14-14 with about 6 minutes left. However, the Wichita game had the fireworks and the comeback. Luckily, I avoided Dighton, who were blown out and called early, 46-0.

The Wichita City Schools only has a few stadiums, and that requires the occasional Thursday night contest. The schools also, generally, lack for interesting names. There’s East, North, South, West, Southeast, Northwest, and Heights. Also, there’s a Northeast Magnet that doesn’t play football. One of the football stadiums is located at South High, named Carpenter Stadium and was the host site for the Southeast-North contest.

And that’s the one I chose. North was a notable underdog, but jumped out to an 18-0 lead. Then led, 24-6. A small blip in their efforts made it 30-14 at the half. Things were looking good for the North Redskins who were dressed a bit like Dover (OH) or St. Clairsville (OH). A nod to Ohio State. While Southeast were the Golden Buffaloes in black and gold with an air of Iowa mixed with Colorado.

The second half was almost all Southeast, however. Three touchdowns in the 3rd gave them the lead. And then the wheels fell off the North defense. But, North wouldn’t go away quietly. Trailing 51-30, North scored on a 47 yard TD run to close the game and make for one of the higher scoring games of the season.

After the game, it was a decision on which game to see. It was going to be out west. And I wanted a good game. One very small school I wanted to see play was Rolla. However they were on the road. And Hugoton was just a bit too far for my liking. But, Liberal was set for a game with Hays. Two towns in Kansas I have a liking for. Liberal being a major intersection between US 83 and US 54. A major beef capital of the state (National Beef is headquartered there) and the game was projected by calpreps to be 35-34.

The game itself, I might say, was a bit of a letdown. Mostly, because the fan support seemed so lacking for such large schools in a football mad state. I was later informed that since Liberal isn’t that good (despite the banners proclaiming their state exploits in the 90s), their fan support has dwindled. Their stadium, Redskin Field, is one of those quintessential large, massive to be massive, stadiums you see dotting the midwest. The entire middle section, from the 40 to the 40, were reserved seats that were sparsely filled. The rest was bleachers. Nice, new, clean, and modern. A great turf field with 8-lane track. Colorful endzones and an inflatable run-through helmet. The team exiting the field at the 50 from under the stands.

Scenes from the first half between Liberal and Hays here in Kansas. #22 @PaFootballNews #BeyondTheKeystone @kpreps pic.twitter.com/x6dlkmrnCA

But the game was sloppy. Very very sloppy. The Liberal Redskins and Hays Indians both had trouble hanging onto the ball. Interceptions and fumbles and a general malaize kept the teams from scoring until late in the second quarter. A 19-yard TD pass wide-open down the middle broke the monotony. But, finally, the home fans had something good to cheer , as they score on an 11-yard TD run. The kick was no good. Tying the game at 6. And it seemed destined for overtime.

In the extra frame, Hays scored on a 4th down pass from the six. Just toe-tapping the left rear corner of the endzone. The extra point squeaked through. Two plays later, Liberal scored and decided to end it right there. a run off tackle to the left went for a loss as the Hays defenders piled on. Ending the game, 13-12. A one-point game as called by Calpreps.

After the game, it was a decision. There were just two games in northwest Texas. One in Abilene and one just east of Abilene in a small dot at a crossroad named Rising Star. The game at Abilene would be my first non-UIL Texas game. As private schools* compete in TAPPS in Texas.

Six hours south. For a 4pm kickoff at venerable Shotwell Stadium. When the UIL first started staging all title games at pre-selected locations, only the largest classes were first held at Jerry World. The other smaller 11-man games were held at Mansfield just south of DFW. And the six-man games were staged at Shotwell Stadium in Abilene. A beautiful, if ridiculously large venue. The parking for the stadium dwarfs it. After several years of six-man practically demanding to be included with their big brothers on the big stage, UIL scheduled them for the week before at Arlington. When the games were moved for one year to Houston, the six-man games, with the bulk of the membership west of I-35, were moved back to Abilene once more.

But, finally, UIL has included six-man in with the regular rotation of games and now compete on the Wednesday opener of the now four-day event.

TAPPS, hwoever, isn’t UIL. But runs quite similarly to the much more recognized UIL. Same rules and structure. Same restrictions on transfers and recruiting. As I mentioned earlier, there is an asterisk. The two behemoths of private schools, Dallas Jesuit and Strake Jesuit (in Houston) were basically kicked out of TAPPS for being too large. And after a faceoff involving the state legislature, the UIL rules were amended to “allow private schools who are unable to accepted to any other private school organization”. Basically, an exception that applies only to those two schools. In addition, they must play at the highest classification level and any evidence of recruiting and they’d be banished from the UIL. So far, they’ve been model members and quite happy to have a home. And it also kept the ‘consolidated tournament’ backers at bay.

From the Sunflower State to the Lone Star State. This afternoon I'm in Abilene, Texas for a Six-man game between Abilene Christian and Lakeland Christian. Kickoff at 4pm. #23 @PaFootballNews #BeyondTheKeystone @TXHSFB @TXHSathletics #txhsfb pic.twitter.com/sRyvGMBtO1

As for the game, it was a six-man game between Abilene Christian and Lakeland Christian. Lakeland being from the DFW suburb of Lewisville. The game was played at Shotwell, with the six-man lines painted on the turf field, with the temporary goal posts added at the previous goal lines. The crowd only sat on the west side of the field.

The game itself was interesting. Originally projected as a blowout, the star all-everything player for Abilene Christian was out this week and Lakeland Christian took advantage. Even leading, late in the game, 30-28. But with 31 seconds left, Abilene Christian scores on a 1-yard TD run to take the lead, and the game after an interception. Final, 34-28.

I was originally hoping this game would end via 45, giving me a bit more time to get over to Rising Star. The homecoming game was slated for 7:30pm. About an hour east of Abilene. A junior high contest was set for 6pm so the 7:30pm kickoff was more of a guideline than a set in stone plan. And despite the Abilene Christian game taking just over two hours, I got to Rising Star with plenty of time. Kickoff didn’t happen until after 7:40. A large crowd had already assembled for the Junior High game, and burgers and Barbecue Brisket Sandwiches filled the air. And they were good, too. Never pass up a brisket sandwich in Texas.

This was my first ever six-man game in Texas at a six-man high school stadium. Wildcat Stadium is a beautiful venue. An old rock wall with entry arch, since closed off, surrounds much of the field. The track is slightly elevated to the field, giving a bowl-like setup. A huge number of kids and parents just meander around the enzone area between the concession stand and the field. A loud, boisterous crowd. With the Junior High game over, it was quick with the pleasantries and onto the anthem and kickoff.

The Three Way Braves, a team in their third season and still looking for their first victory, jumped out to a quick lead, before Rising Star mounted a comeback. With a key injury, it left Three Way unable to move the ball, and their 22-point first quarter would be their only points until late in the game. Rising Star, however, only had 7 men playing. And substituted liberally. A slim 28-22 halftime lead ballooned to 51-22 after 3. But Three Way managed to score twice and make the final a respectable, if disappointing, 59-36 to the homestanding Wildcats.

I did post a series of highlights from the Rising Star game. Highlighting the differences with six-man football and yet how it’s still ‘real football’.

Here's some six-man highlights from the Rising Star v. Three Way for those curious what six-man football is really like. (1/) @PaFootballNews #BeyondTheKeystone pic.twitter.com/BlCwejcs1w

For Week 5, my initial plans in Ohio were dashed. But, I made the most of it with Kansas and the twin-bill in Texas. A great week of football in America’s heartland. For Week 6, I’m not sure where I’ll be. But, wherever it is, I’m sure I’ll be at a game.