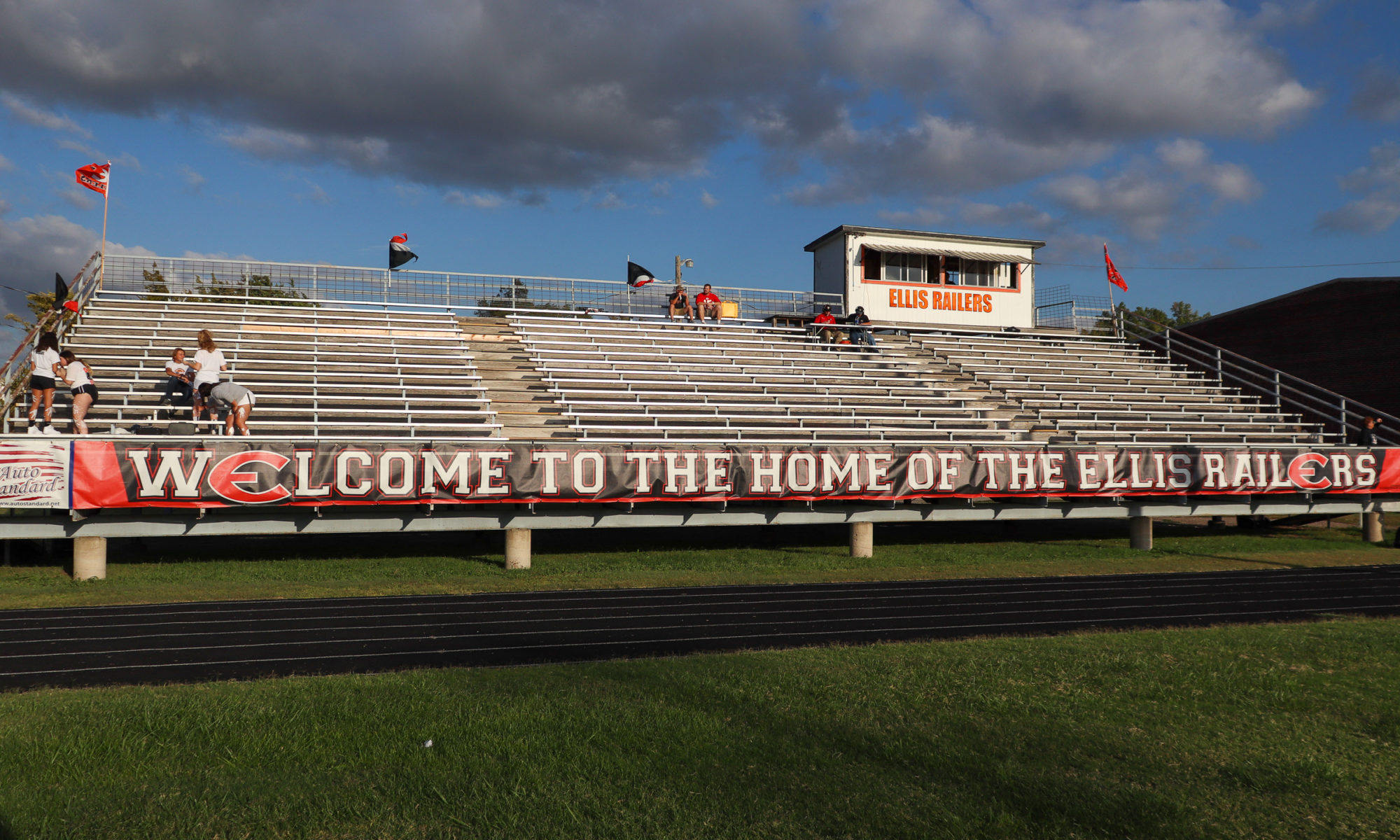 After my good fortune last weekend getting four games in, things were a bit rockier in Week 6. I was still in the western plains, and though there were a few Thursday options, Saturday in Kansas is basically devoid of games. There were a few games near Denver and two in western Missouri. And one in Texas for the afternoon (Odessa or Midland).

But one Friday night game was really on my radar. St. Francis hosting Oberlin. I’ve been to both towns. Several times, in fact. But with Kansas 8-man using the Texas-style 45 point rule, I wasn’t keen on seeing half of a game. So, I set out to look for another games.

I had already zeroed in on Kit Carson for Thursday night. The only other option was La Junta (hosting Raton, NM), Aurora (Hinkley hosting Sand Springs), and Topeka, Kansas (hosting Junction City, in what turned out to be a great game).

But, Kit Carson was going to be it. A six-man game on a desolate stretch of US287. A road that snakes its way from Limon, Colorado to Amarillo, Texas and on to Fort Worth. I’ve seen games in Memphis (TX), Springfield (CO), Lamar (CO), and Limon (CO). I still want to see games in Eads, Wiley, and Hugo, Colorado. The last three schools in that barren stretch of Colorado real estate.

On my way to Kit Carson, Colorado for tonight's football game. When someone tells you Colorado is mountainous, remember that's only the west half of the state. The rest is endless flat prairie. #25 @PaFootballNews #BeyondTheKeystone pic.twitter.com/8v1CKlL5xD

I arrived in Kit Carson for lunch, and ate at the only restaurant in town, the Trading Post. Really good food. But some items to avoid. Such as this descriptive appetizer that wasn’t so appetizing.

Now I'm an adventurous eater. But not that adventurous. #roadtrippin pic.twitter.com/1QhkqB7dm3

Some of the best hot wings ever. Picture doesn't do them justice but they're huge. #roadtrippin pic.twitter.com/nGjkkjPr0D

At 4pm, Kit Carson was hosting their Junior High game against Cheraw. And then at 7pm, the high school game would kickoff. A new school building is being constructed the entire length of the southern sideline. Leaving your view from the home stands of Earthmovers and other equipment. The junior high six-man game was played with 8-minute running quarters. That mostly didn’t stop for anything other than timeouts. Cheraw won, 12-6 after a late fourth quarter touchdown. The game took less than an hour and then setup a very long wait for the marquee game. 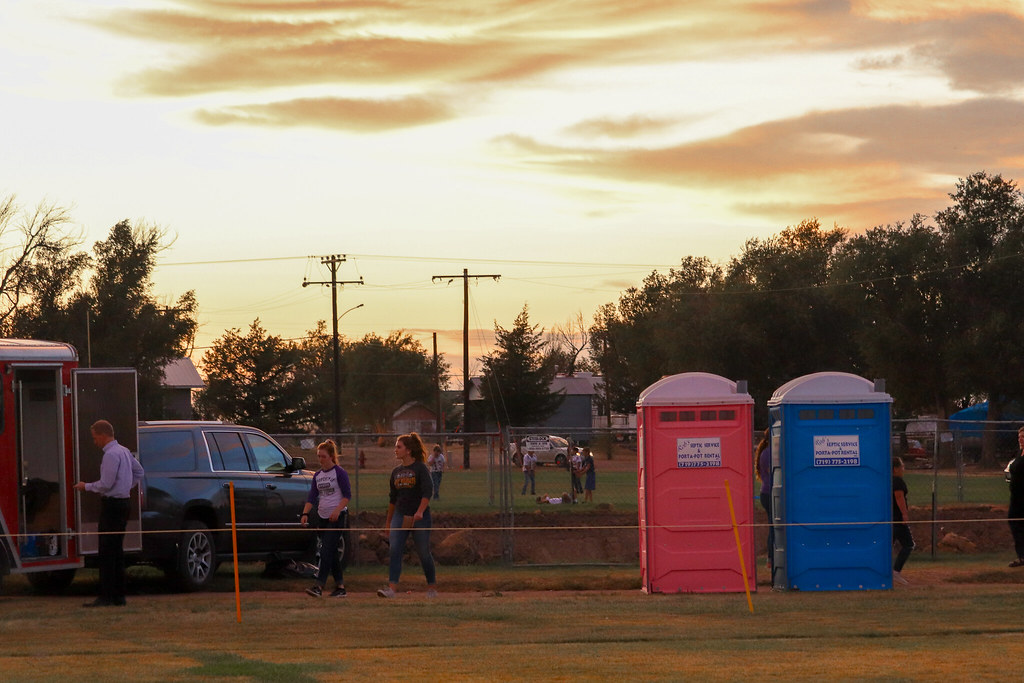 At the stadium, restrooms were a pair of blue and pink port-a-potties, and concessions were provided out of the back of a pickup truck’s trailer. 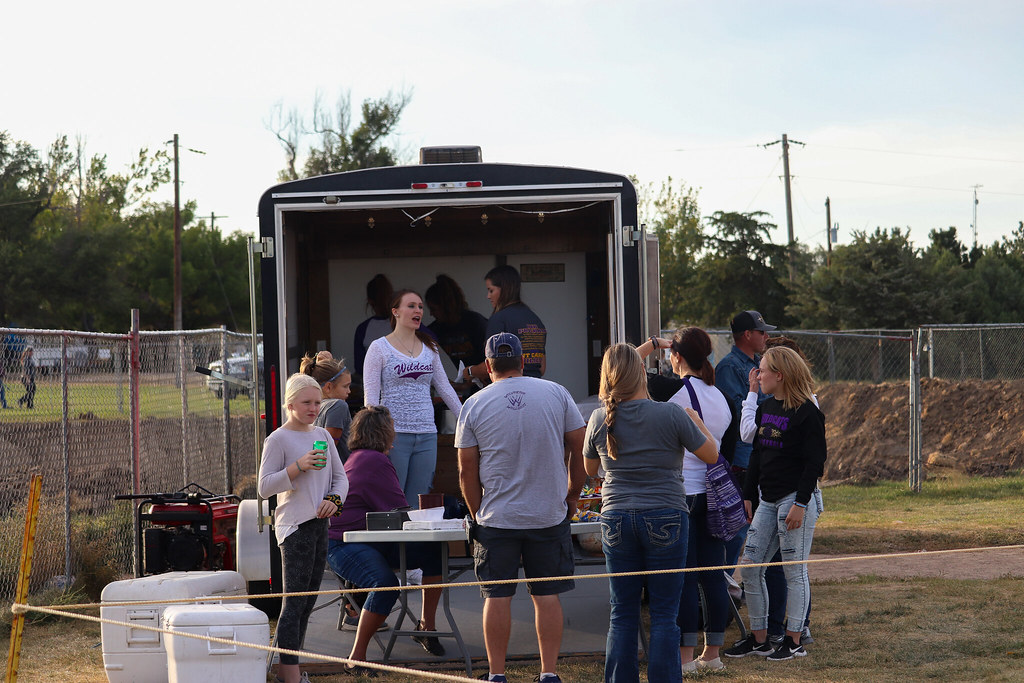 The food, though, was good. Cheeseburger was well worth the $3 price. They did have one regional offering, smothered burritos. Also, unsmothered was an option. After those were gone, they offered “Longhorn Burgers”, which were cheeseburgers with green chiles on them.

For the game itself, a decent crowd had arrived including a large number of fans parked around the field in cars. A common occurrence out west, and in lieu of stadiums with handicap seating. The lighting was well below acceptable standards. No light poles were on the visitor side. And the ones on the home side weren’t used. Instead, eight generators were setup and used as the stadium lights. The incessant rumble of the diesel generators made for an odd background noise for a game. Photography was difficult, to say the least.

Kit Carson was the heavy favorite (57-2 projection), and if not for three kickoff returns for touchdowns, would have secured a shutout. Unlike Texas and Kansas, there was no 45-point rule. But, it wasn’t really needed. Cheraw’s defense did admirably where their offense could not. A 12-6 first quarter gave way to a 33-6 halftime lead. And then 61-20 for the final.

For the game, it was my first game in Colorado in years. I have been to games in the aforementioned Lamar and Springfield, as well as games in Limon, Kersey (Platte Valley), and Brush. This was my first six-man game. Springfield played 8-man when I was there. The rest were 11-man.

For Friday, then, my options were wide-open. As I had said, St. Francis (and Oberlin) have been two towns I’d have loved to see play. However, the 45 point rule really squashes interest. And I couldn’t just hang out in Colorado. Where there also were a handful of Saturday afternoon games. Including an epic clash between Limon and Strasburg.

So, I checked on as many western Kansas games as I could. Syracuse v. Sublette, Wheatfield-Grinnel v. Wallace County. Oakley v. Goodland. Weskan and Colby both had games. Maybe Hays (again) hosting Garden City. And Ellis hosting LaCrosse. Now, I had been to Ellis before. I stopped in town on I-70 many moons ago, and one of the workers had an Ellis Railroaders shirt. And it just stuck with me and it’s been on my list for a while.

And lacking a competitive 8-man game, I decided to get to Ellis and see what the Railroaders were all about.

Today I'm in Ellis, Kansas for a matchup between the Ellis Railroaders and the La Crosse Leopards. #26 @PaFootballNews #BeyondTheKeystone @kpreps pic.twitter.com/2LeG9BjPFY

Now, Ellis is an old town. It’s the boyhood home of Walter Chrysler. It also has a weird dual Railroad Museum and Doll Display. The stadium is located at the Old High School. While the new school is south of town. Now, this stadium has character. And a lot of noteworthiness.

First, the field is surrounded by a rounded-cornered square track. The track runs inside the home stand and behind the visitor stand. The home side and visitor side are similarly constructed of metal supports with wooden planks for steps and footpaths. The stadium sits at the end of the high school building. The school sits just outside the track. And the stands begin about 10 yards to the left of the school. Giving an opening for the players to leave the lockerrooms inside the old building. It also means the home stands start at about the 50 yard line and only cover one half of the field. The wood light poles then sit in front of the stands inside the track. I was told that at one point, the home stands sat inside the track right up against the field. Just as the visitor stands do. 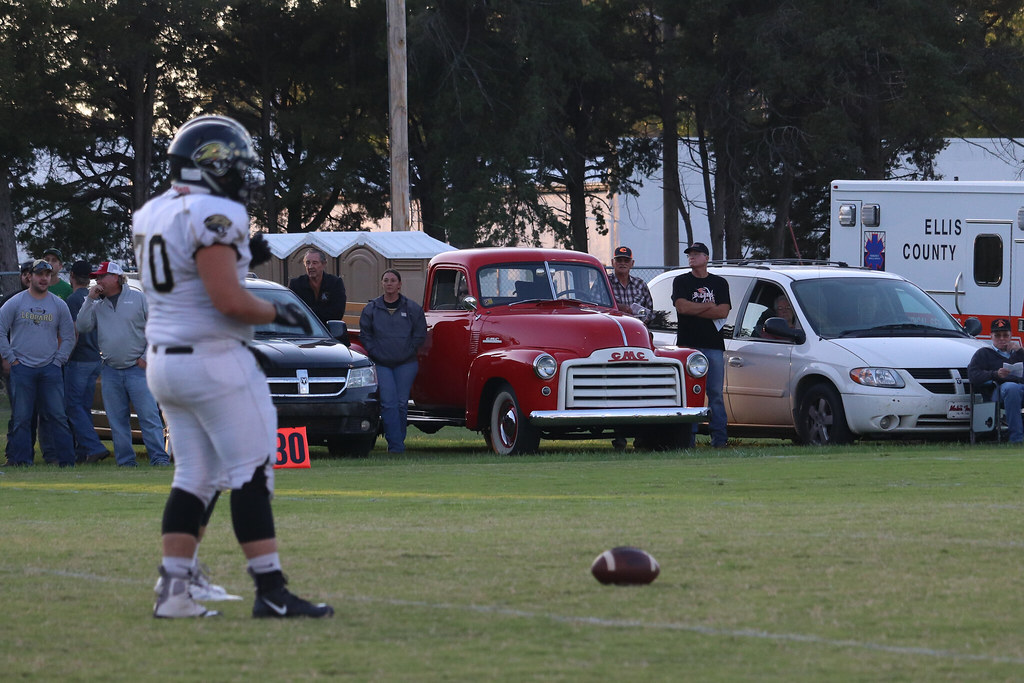 As with other fields, on field parking for some is allowed around the perimeter. Many others just stood along the field, staying a few yards away with no real definition on where the edge of the fan sections are. The visiting cheerleaders, then, took up residence in the wider walkway at the bottom of the visitor stands. Rather than anywhere on the very small sideline.

Also, a major storm had been through and the once dense grove of trees that guarded the field on three sides had seen major damage. Eighty mile per hour winds had knocked down 26 of them. And damaged the north endzone’s fence. The trees were still laid on the ground in the north endzone, while the south endzone only had a few trees still standing and the rest removed. They will be removing the rest of the northern and southern trees. Leaving only a row of trees behind the visitor stands.

For the gameday environs, they were selling sponsored tee shirts for $5 for regular sizes, and $8 for extended sizes. A deal I couldn’t pass up. Concessions were minimal. Pretzels with cheese and pizza were about the only main options. A walking taco, nachos, and candy and pops were about the rest of the selection.

The game itself started as a dud. Ellis, known colloquially as the Railers and not just the Railroaders, struggled on offense and fell behind LaCrosse by 28-0 in the third. Before finally mounting an effort to come back when the LaCrosse Leopards had all but tasted victory. Some spectacular catches on two-point conversions made it 42-28 while Ellis had the ball late and faltered after a first down, resulting in a 4th and 22 from about the 32. A deep pass to the endzone was incomplete and ended the scoring threat, and solidified the victory for LaCrosse.

The two teams play again in four weeks. A quirk of a limited pool of opposition that play eleven-man football in that area of Kansas.

Overall, though, it was a great night at a new venue. Ellis has a quirky, but endearing quality to its field and team. The ‘new’ high school is over 40 years old already and they’re still playing at the old school. The stadium lacked a name, or so I was told, and as the building is generally called “Old Ellis High”, “Old Ellis Field” is more than proper for a name.

After that, my Saturday was left open. Not a bad result given seeing two games in towns I’ve had penciled in for quite some time on my bucket list. Though, to say that bucket list is extensive would be an understatement.

As for my other options, that St. Francis-Oberlin Decatur game ended in the third quarter, St. Francis, the #1 team in the state, winning 48-2. Also, the Wheatland-Grinnel v. Wallace County game, another I feared would be 45’d went close, Wheatland-Grinnel had a 30-0 halftime lead and won the game, 44-0. Elsewhere, though, were some incredible games. Hays beat Garden City, 37-34. Colby beat Beloit, 21-20 while Oakley loses to Goodland, by the same score, 21-20. Syracuse falls to Sublette, who won their first game in 36 tries, after trailing 14-0 in the fourth quarter, by a 15-14 final. Also, Weskan has a great game, falling though, to Natoma, 65-61 and Cheylin beats Golden Plains, 71-61. Those two are rather rare 6-man games in Kansas. Which only has a handful of teams.

Next week I’m back in Ohio and Pennsylania. Currently with 5 games on the calendar. Several places I’ve been before. And only 1 new team currently planned. Though Friday night MAY have two more new teams and another new stadium. But, time will tell.