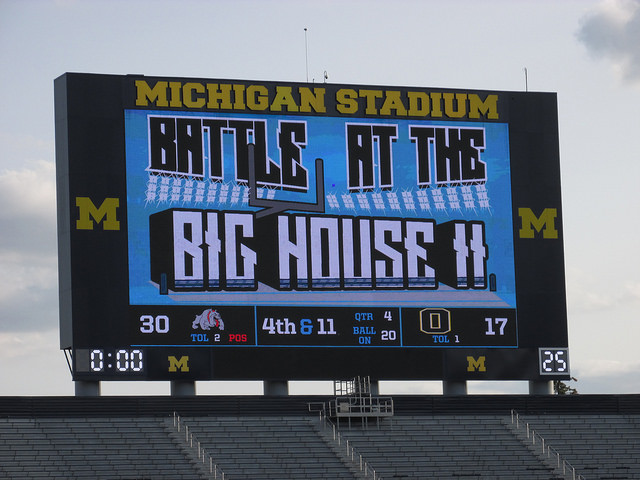 This a little late, and I have several more states to go through. But, I will run down my trip to Michigan. For many years, the Detroit area has hosted the “Prep Kickoff Classic” much akin to the Crosstown Showdown. It is several games over a few days at one location. In years past, it was at Eastern Michigan University’s stadium in Ypsilanti. It was eventually moved to Wayne State, just west of downtown Detroit.

Recently, it has been seven games over three days. A doubleheader on Thursday and Friday, and a tripleheader on Saturday. However, starting last year, a new event has started. That being the “Battle at the Big House”. Unlike the Prep Kickoff Classic, which is sponsored and organized by the Detroit Sports Commission, the Battle at the Big House is organized by the high schools participating. Primarily, Clarkston High School.

Unfortunately, this does make the Battle at the Big House feel a bit ‘unorganized’. The games are played at Michigan Stadium over six days. The first year in 2016, they mimicked the Prep Kickoff Classic with 7 games over the same schedule. However, for 2017, it was only six games. Three doubleheaders. The last being a day-time doubleheader on Saturday.

Instead of heading up for the weekend, the wife and I drove up just for the Friday night games. A doubleheader featuring Romeo-Oxford and Clarkston-Lapeer. Getting there in time was easy. Parking, though, could’ve been handled better. I had called once and was told that parking at Pioneer High School southwest of the stadium was the best location, and the southwest gate would be open.

Instead, it was the southeast gate that was open, which meant parking at Pioneer High School one of the furthest treks you could make. The $5 fee didn’t help the matter. Tickets were a flat $10 for the doubleheader. Upon entry, though, the stadium lacks ‘appeal’. To put it nicely.

Their ushers, however, were top notch. The stadium, though, was only open on one side. The east side. Michigan Stadium is sunk into the ground, and the vomitories let out about 50 rows above the playing surface. Even with the additional rows above ground and the monstrous club, luxury, and pressbox edifice dominating the seating bowl to the west, the sun was still visible for almost the entire first game blinding you. Meanwhile, the entire western half of the seating bowl was in the shade. These games didn’t appear to be on television, so seating fans opposite the press box seemed pointless. Instead of comfortably sitting in the shade on a hot day, everyone shielded themselves from the sun trying to view the field.

Aside from that, the games themselves weren’t that great. Romeo won 30-17, while Clarkston blew up their matchup with Lapeer, winning 42-7.

There wasn’t much to these games. No programs. Just ‘roster sheets’ that were handed out when you entered. But, only for that particular game. The first game had already exhausted their meager supply by the time we had arrived. Interestingly, no other souvenirs, shirts, or anything similar were sold. Either for the schools playing or the events.

Overall, the fans around me had two overriding thoughts: this is awesome being here. And… the novelty wears off very quickly. Clarkston’s second time playing here really had a less enthusiastic crowd than I expected. And the crowd started to disperse once the game was out of hand.

Staring at the far side of the field completely devoid of people yet bathed in shade had some people a bit put off.

Either way, it was something to do. A novelty and something to mark off the bucket list. The sixth Big Ten stadium I’ve attended a high school game at. But, that’s about the extent of the intrigue in going to games there. If I do head to Michigan for Week 1 again. It will be for the Prep Kickoff Classic.