After my guantlet of 4 states in three days in Week 10, I wasn’t expecting to do much for Week 11. Just head home. But, that’s when I realized, on Tuesday, that there was 8 Minnesota State Playoffs at the Fargodome on Thursday and Friday.

Why Fargo? Because the northwest part of Minnesota is generally lacking for quality playoff host sites and what better place to play in the upper midwest than a climate controlled dome that’s easily accessible to most of the area.

But, I only stuck around for two of the eight. The first two on Thursday were 9-man games and giving an opportunity to showcase the 9-Man game, to go along with previous 6- and 8-man games.

The two schools are only 25.3 miles apart, while Win-E-Mac, as the furthest, had a 92.7 mile trek to the Fargodome. Like a lot of small schools, the kicking game is trouble and two-point conversions are commonplace. Even with the better teams. After a 16-6 lead gave way to an 18-16 lead for Fertile-Beltrami after three, the Falcons succombed to their own success and Win-E-Mac tacked on two touchdowns in the 4th to take a 30-18 lead and win it easily. Win-E-Mac 30, Fertile-Beltrami 18

The second game of the quadrupleheader would determine Win-E-Mac’s next round opponent. The co-op between Littlefork-Big Falls and Northome/Kelliher formed an even larger co-op this season and took the name of the North Central Stars. The blue and orange clad teams hailed from the rural areas southwest of International Falls. Their opponent, Warren-Alvarado-Oslo is a consolidation from the area just northeast of Grand Forks/East Grand Forks area. While that is relatively close to Fargo, the furthest trek would be the Littlefork contingent taking a 181 mile journey to the dome.

The game opened with a high-scoring prospect. North Central would score first, followed immediately by W-A-O taking the lead, 8-6 after successfully converting the two-point play. Then there was a long stretch of scorelessness. North Central scored near the end of the 3rd with a tipped pass being caught in the endzone to take the lead. And it looked like it would hold up. And then But with just 59 seconds left, W-A-O Ponies would score on an 8-yard run to take a 14-12 lead. And right when you think it’s over, W-A-O intercepting a pass, they fumble it on the return and it’s recovered by North Central. And North Central is stopped again in the redzone with 5 seconds left, by throwing another interception into the front corner of the endzone to end the game. Warren-Alvarado-Oslo 14, North Central 12

Now, 9-Man football isn’t that widespread. Currently, only Minnesota, North Dakota, and South Dakota offer it. Wyoming will convert their 1A 11-Man into 1A 9-Man starting next season. Elsewhere in the area, Montana, Wisconsin, Michigan, Iowa, Nebraska, Colorado, and Kansas all offer 8-Man as an option. And though Montana, Wyoming, and Colorado offer six-man, and Nebraska and Kansas both offer 6-man to varying degrees (Kansas only has a few six-man schools), it’s currently not common at all in the north central states. Though, South Dakota will convert the 9B Classification into six-man starting next year. Currently, the SDHSAA splits 11-man and 9-man at a 55-person cutoff. The top 3rd are 9AA, the middle 3rd are 9A, and bottom 3rd are 9B. Next year, that bottom 3rd will now be six-man.

Tonight I'm in DeForest, Wisconsin for a Division 3 Playoff game between the DeForest Norskies and the Reedsburg Beavers. Kickoff at 7pm local. #47 @PaFootballNews #BeyondTheKeystone pic.twitter.com/K9TNoEt4Ru

After the two games in North Dakota it was a long drive to Wisconsin. And a couple of possible matchups intrigued me. A few around Green Bay, but I settled rather quickly on DeForest Norskies hosting the Reedsburg Beavers. DeForest is a small town north/northeast of Madison. The homestanding Norskies are a cross between LSU and the Minnesota Vikings. Purple and Yellow, with the arched DFS in place of the LSU over a Norski logo, rather than the Tiger of LSU.

This was a first round game in Wisconsin. In the state, Wisconsin has a rather symetrical playoff structure compared to PA. It is bracketed by region, so the early rounds tend to be more local matchups. The higher seed hosts and DeForest’s rather nice, and somewhat new, DMB Community Bank Stadium, aka DMB Stadium, was the setting. A snowstorm passed through before the game and had mostly been cleared. But more snow was on the forecast and started just before kickoff. And continued throughout the entire game. Only dwindling a bit toward the end.

DeForest with a long fumble return to setup an 11 yard TD run on the next play. The PAT snap was mishandled. Leads Reedsburg, 20-0 with 11:41 left in the game. @PaFootballNews #BeyondTheKeystone pic.twitter.com/niS4ngi1St

The cold and conditions made it difficult for passing games. And that’s where the Norskies’ running game shined. Two touchdowns in the first half, and iced the game, literally and figuratively, with a late game TD to make it 20-0. Reedsburg offense never got moving well and some miscues with ballhandling finalized things. DeForest 20, Reedsburg 0

This was my first game in Wisconsin in years. I attended 3 of the 7 state championships back in 2010. Leaving to then drive to Minneapolis for six games at the Metrodome on the very next day. So, my first time at a high school for a game. And, personally, I enjoyed my time in DeForest. It’s a great stadium, that as alluded to by their fundraising, really needs turf. But a bad weather game on a muddy, grassy, slushy field is never a bad game. A small printed program was free, and I bought $20 leather gloves as my souvenir.

Next week, DeForest plays Monroe, and due to the field conditions at DMB Stadium, will instead by played at a neutral site.

Marion plays at the beautiful Wildcat Stadium. Squeezed into the area behind the school, and has a long facade of the building running along the eastern endzone. The entire stadium complex is new. With large seating along the east end for students, the band sits to the west in a perched section above and beside a large picnic table area.

The field is fully turfed, though with a very large sideline area. The stands are elevated, for the home side, which gives a great view of the field.

For the first round IHSA matchup, the Marion Wildcats were hosting the Triad Knights. The Knights aerial attack started and jumped out to a 14-0 lead. Marion then played catch up the rest of the game. 14-6 after 1, 20-12 at the break. But, in the second half it was almost all Triad. Marion got as close as 41-28 in the 3rd, before Triad went on a tear and scored twice more in the fourth to finish the game off and clinch passage into the next round. Triad 55, Marion 28

For next week, I’ll be at New Era Field in Orchard Park for the five NYSPHSAA Section 6 Finals. Two games on Friday and three games on Saturday. Including the CSP game at noon on Saturday.

After that, I plan to attend the twelve games at the UNI-Dome. If things work out, the first of two Class 4A games on Friday will be my 1,000th game. Matchup won’t be known until after this weekend. 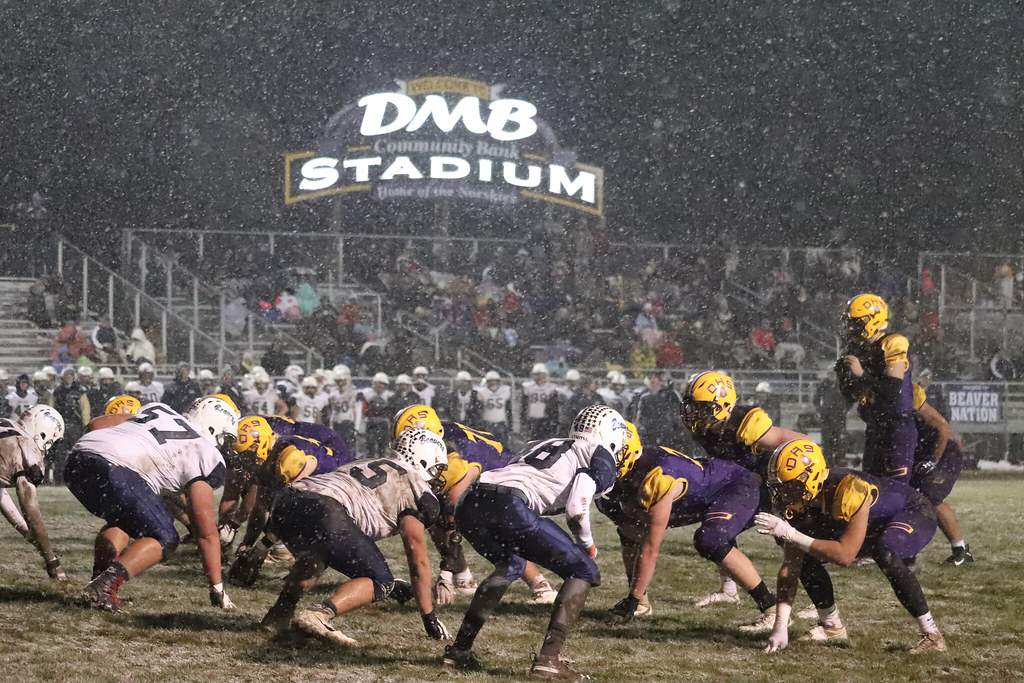 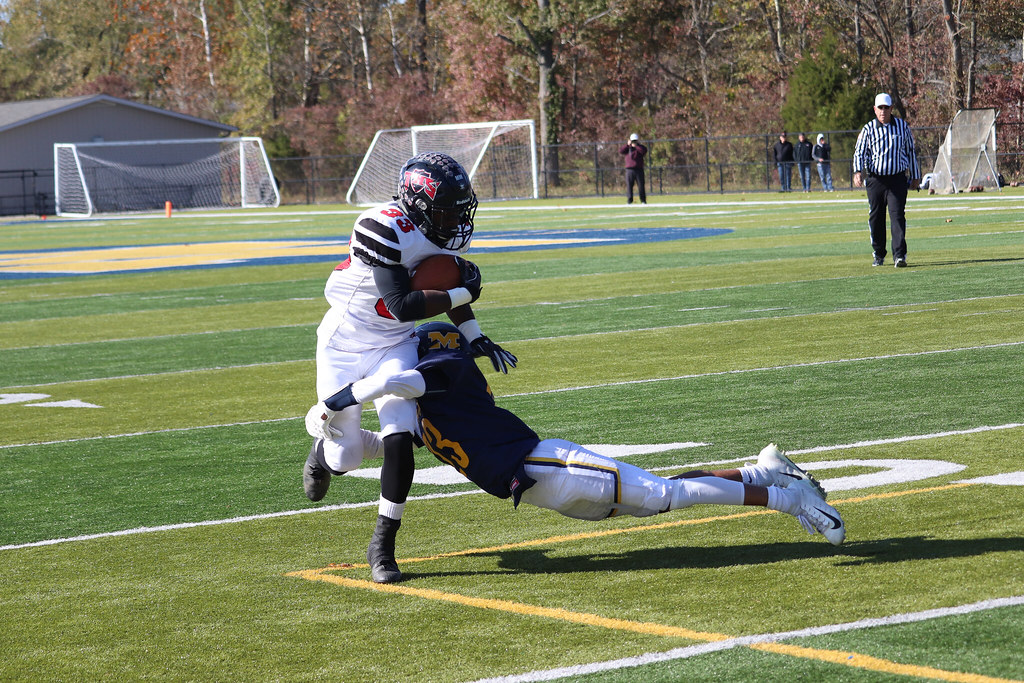 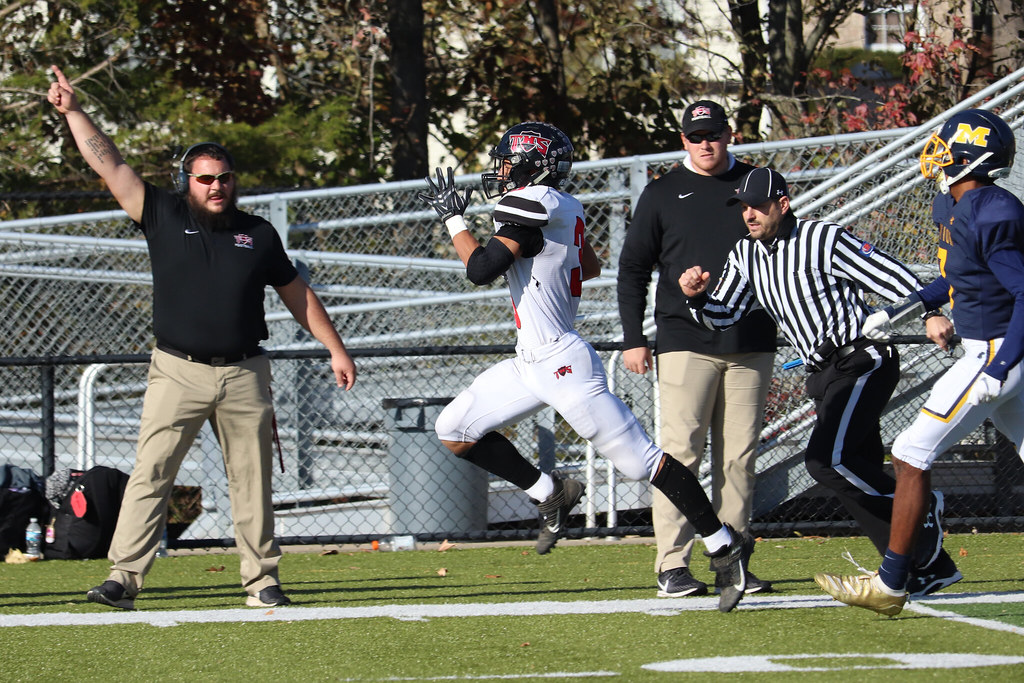