This week was something else. I started with a plan to see four games. A doubleheader in Denver on Thursday, a game in Lusk, Wyoming on Friday, and a Saturday afternoon playoff game in North Dakota.

That was the plan. Thursday started with some snow. A lot of snow, from starting off in southeastern Colorado and making the long drive to Denver for what I hoped would be two games ofa doubleheader at Arvada’s NAAC Stadium. Located in the far northwestern corner from Denver.

But, that saw a stumbling block and I didn’t make it to the stadium in time for the 4pm kickoff. And then couldn’t get pictures or do much of anything when I did get there at halftime. After that, I didn’t feel like doing much for covering a game I missed the kickoff. Just sat in the cold in the stands with some hot chocolate and made the best of the situation watching the game.

After that, the weather continued to grow colder. But, a night game was shaping up between Pomona and Columbine to kickoff at 7:30pm local time. Columbine opened up a quick lead, saw it slip away, and then matched it until Pomona took the lead again right before halftime. A hefty third quarter lead wittled away as Columbine scored on a touchdown, recovered a fumble and scored again, missed the extra point, got an onside kick, and then missed a 47-yard field goal with 1 second remaining.

For the games, I never did find programs of any kind. The cold had subdued the crowds and the afternoon timeslot really shrunk the first games’ attendance considerably. An ‘estimate’ on MaxPreps had it listed as ‘about 100’, but it was much closer to 300-400 by halftime.

The next morning, it was a planned drive north to the small town of Lusk, Wyoming. One time, years ago, I stopped in the town and as part of my travels, walked the track around the field at the school one summer. And it has always been on my list for the future. I had seen Lusk Niobrara County (they generally just go by Lusk) play a playoff game at Cokeville.

However, I had also planned to see a Saturday afternoon game in the furthest southwestern corner of North Dakota. Bowman was hosting a playoff game, and I intended to make that drive. Which meant, between the end of the Lusk game and the start of the game in Bowman, would require a 4.5 hour drive.

So, I started looking at other options. And, if you know anything about Wyoming, northeastern Wyoming is fairly sparse. North of Lusk, and East of route 59 between Casper and Gillette, there’s not a lot of towns. And not a lot that play football. Upton-Sundance was playing a game in Casper. Midwest had forfeited the rest of their season. The Gillette and Thunder Basin games didn’t intrigue me. Hulett, a small dot north of I-90 had a Saturday afternoon game against Lingle scheduled…. so, the only two games available were Moorcroft v. Glenrock and Newcastle v. Buffalo.

In years past, I’ve seen Buffalo play. They hosted Riverton on a Friday night after seeing Kaycee host Meeteetse in a Friday afternoon 6-man game just south of town. Newcastle is definitely one of those ‘if I’m ever there’ places as well. But the game was projected to be a bloodbath. Buffalo was a 62-0 favorite who would go on to win 62-14. But, Moorcroft was a 34-24 favorite over Glenrock. Two teams I’ve never seen before.

Tonight I'm in Moorcroft, Wyoming for a game between the Moorcroft Wolves and Glenrock Herders. #42 @PaFootballNews #BeyondTheKeystone pic.twitter.com/lFCu6y5LWO

And with a bit of reluctance, I drove through Lusk on my way up to Moorcroft. Now, the one fun thing about Wyoming is that high school sports in the Equality State don’t charge admission for regular season contests. Which really changes the structure of things like stadiums. For instance, the stadiums just don’t have fences surrounding them. Or gates. or ticket booths. Anyone who wants can just wander up and take a seat. And small 2-page programs (that lacked much of anything resembling what most think of a program) were free. Only playoff games charge admission.

But where they lack for ticket sales, the Moorcroft Wolves make up for it with an extensive merchandise booth. Shirts, hats, chair backs, scarves, jackets, blankets, etc. Maybe a tad pricy, but a $15 shirt for my daughter was my souvenir for the night.

These two teams were heavy-run teams. Glenrock, late in the game after completing a pass, saw one of the lineman running off excitedly, “We completed a pass!” A pass that didn’t get a first down.

But the back-and-forth affair was fun to watch. Moorcroft lead, 6-0 after one, and 12-6 after two. After an early Moorcroft Wolves TD, Glenrock scored again to make it 18-12. But, Moorcroft would slowly pull away. Thanks to a scoop-n-score fumble return TD, and late in the game a 69-yard interception return.

For the final game of the season for both squads, it was a fun, beautiful night of football.

The next morning, leaving town, I stopped at the Heidi’s inside the travel plaza in town right off the highway. An ‘east-coast’ take on sandwiches, I tried the club and it wasn’t too bad. But $11 for a sandwich on fresh cut sourdough is a bit grotesque, price-wise. But, I’d get it again. The sandwich was good.

It was a beautiful three hour drive up here to the edge of the world. Bowman, North Dakota. Hosts of a 1pm playoff game between Bowman County and Kenmare/Bowbells/Burke Central. @PaFootballNews #BeyondTheKeystone pic.twitter.com/lZdW6M6buh

But, I made the drive to Bowman with plenty of time to spare. Arriving in town over 90 minutes before kickoff. So, time to kill. This included eating one of the worst pieces of fried chicken I’ve ever had. Deep fried jerky might have had less texture. But, alas, as I sat eating my piece of chicken and Frontier Burger, which was basically a bacon cheeseburger loaded with tabasco sauce, it started snowing. It wasn’t sticking. Much. But it was coming down and with the 25mph winds, was quite a scene outside.

Photography is going to have issues today. The current conditions & light blustery snow. And internet is not the best here. But the game between the Bowman County Bulldogs and the Kenmare/Bowbells/Burke Central Honkers will still go on. #43 @PaFootballNews #BeyondTheKeystone pic.twitter.com/Ds02CHJZak

Meanwhile, the forecast still didn’t show any snow. It was frustrating. Since, to photograph a game in the snow requires a bit more forethought and equipment. Namely, something to keep it dry. So, after getting situated and walking into the stadium. It was no surprise that, despite the wind continuing, the snow would stop before kickoff.

But, the game was one. A first round playoff game between the Bowman County Bulldogs and Kenmare/Bowbells/Burke Central Honkers. A reality of the midwest is there’s a lot of open land and schools can’t be that far away from people. So you wind up with small schools dotting the landscape. And in the case of Kenmare, Bowbells, and Burke Central, a co-op is necessary to play football. Even Bowman County is actually a co-op between the schools within the county, playing under the Bowman County banner.

The three schools, of Kenmare, Bowbells, and Burke Central are located near the Canadian border. I’ve actually been through that area before. An interesting stretch of sudden growth thanks to the Bakken formation. Though, the only town I’ve been to has been Bowbells. Kenmare and Lignite (home of Burke Central) were just a bit off the beaten path. Bowman, meanwhile, was a small town I’d been in before. Twice, actually. So, it was cool to see a game at the little stadium by the US12/US85 intersection.

Bowman County did have free programs, a rather nice ‘magazine style’ print left out for free by the entrance. The wind, though, had fun with those.

For the game itself, it wasn’t close. Bowman County is in another level. Two one-play drives to start the game. A quick 12-0 lead. A 26-0 first quarter lead. A 46-0 halftime lead. And a quick run through the second half mercy rule.

This made the option of seeing a Saturday night game in Montana quite simple. A 7pm kickoff just under three hours away. The Bowman County game ended by 3pm. So, off I went. The game was between Savage and Wibaux. And the drive through Montana included going through Wibaux. To Glendive, and up Route 16 to Savage.

And another bit of personal accomplishment:

Savage is located in Richland County, Montana. This is the last County in Montana for me. Now Montana is my 38th state I've been to every county. #roadtrippin pic.twitter.com/qg86DeeuHP

So not only do I visit the last county in Montana, but got to see a game in Richland County, as well. Though it wasn’t the first time I’ve ever seen from Richland County. By unimaginable odds, I saw Lambert/Richey (the Fusion), play a game against Garfield County in Jordan, Montana.

Tonight I'm in Savage, Montana for a 6-man game between Savage Warriors and the Wibaux Longhorns. #44 @PaFootballNews #BeyondTheKeystone pic.twitter.com/rxzbUE2y6v

Savage’s Quale Field is located on the eastern edge of town. A small school sits along a lonely, small north/south street, with a small toll booth setup at the corner to collect ticket money from fans as they enter the field area. As with many football fields out west, fans can arrive early and park their cars around the field to get the most comfortable seats available.

Now, according to sixmania, the Wibaux Longhorns were 31 point favorites. But, the Savage Warriors, all 9 players going against the 11 of Wibaux, struggled through a stalemate for ten minutes. But, the first play of the second quarter ceded the deadlock to the visitors. And several more touchdowns made it 21-0 at halftime. Two more Wibaux touchdowns in the third quarter started the running clock. And a few frustrated attempts late in the game by Savage failed to produce points.

So, maybe not everything went as planned. But, it was a great weekend of football in the Upper Plains. Another novelty is this was the first weekend I had ever seen games in four states. So, instead of trying to haphazardly list them all, “Upper Plains” is how this week will be documented. 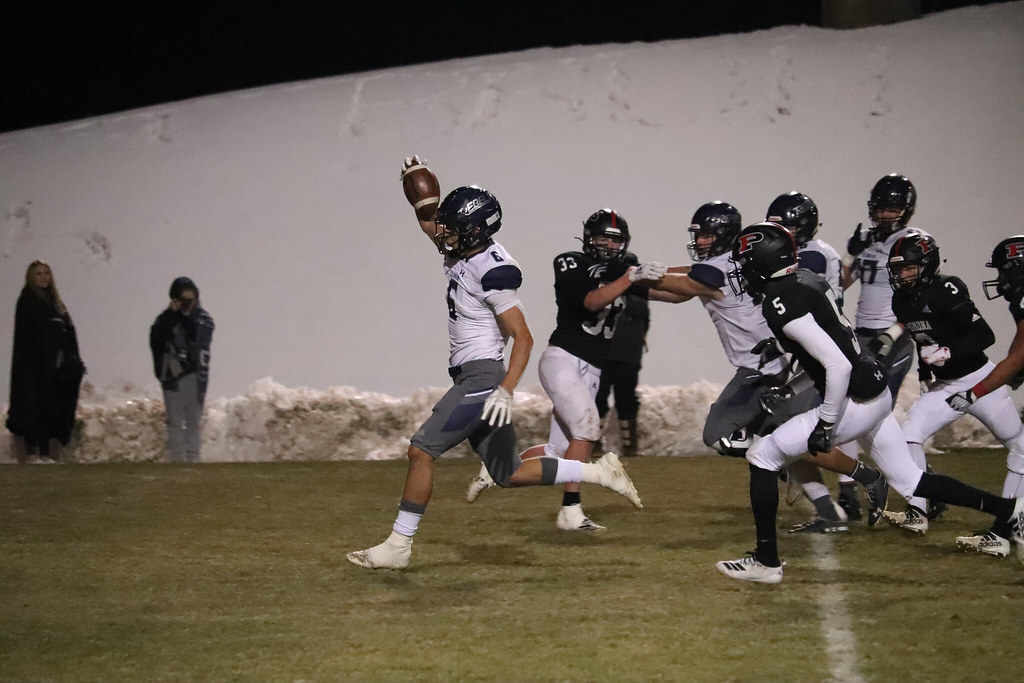 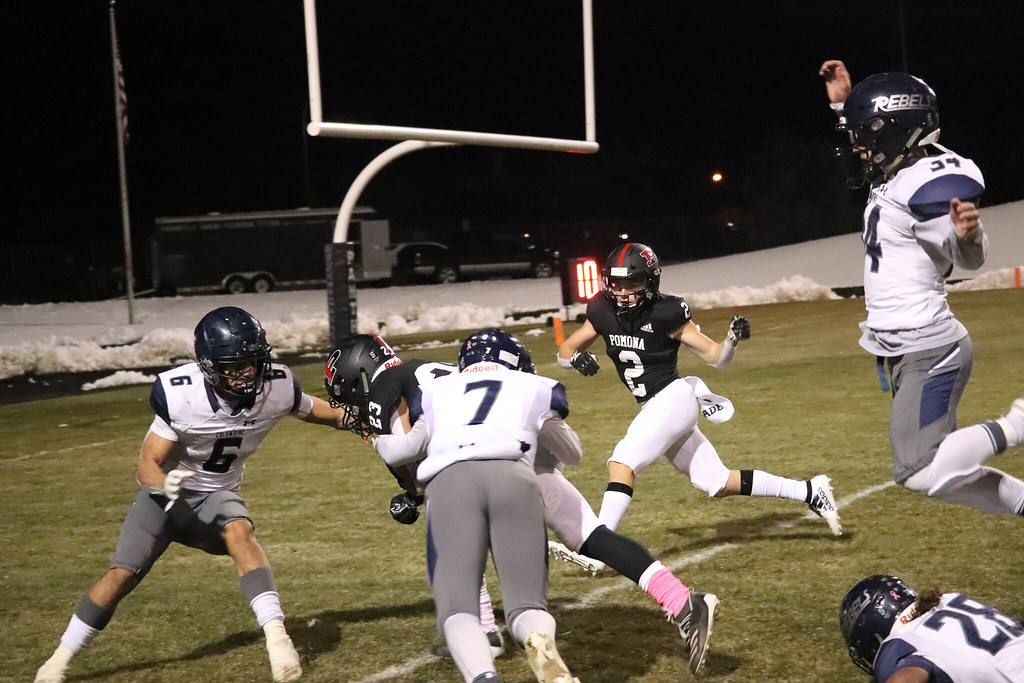 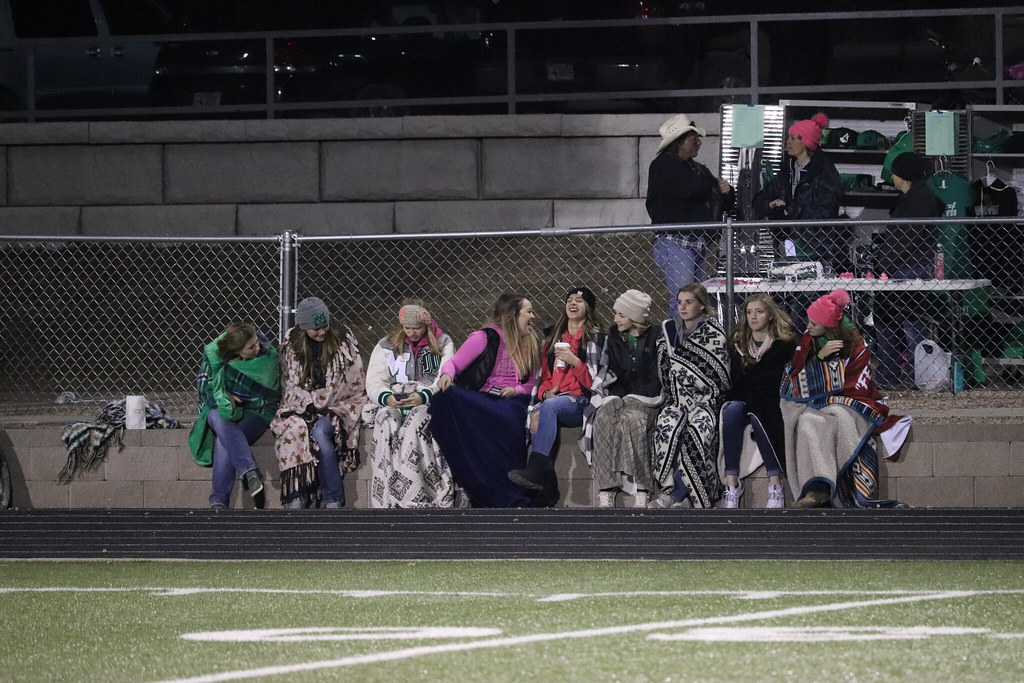 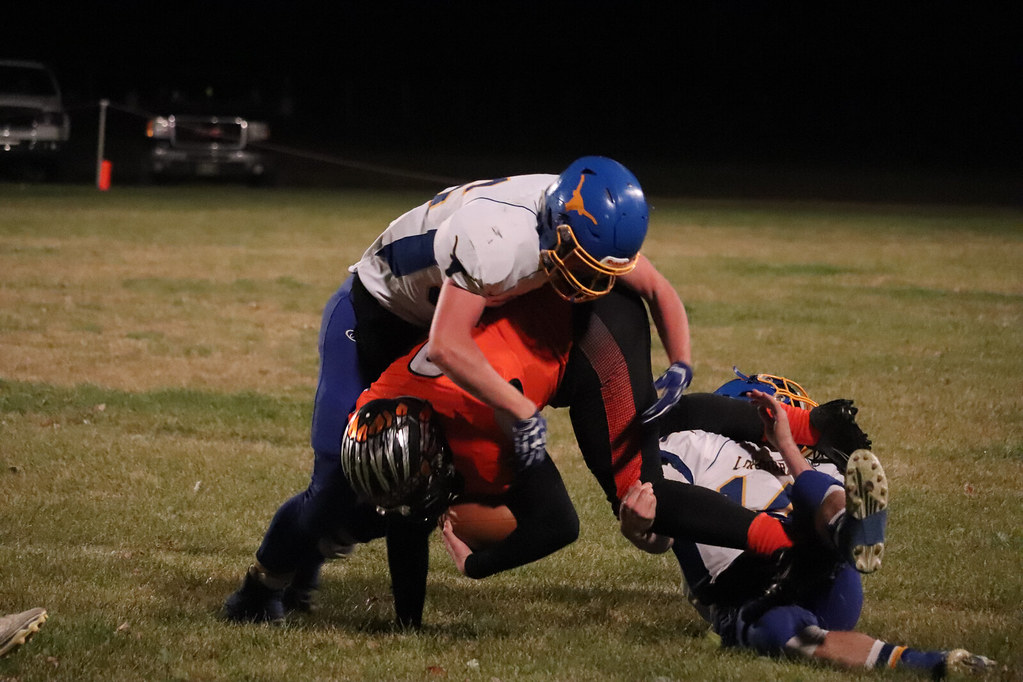