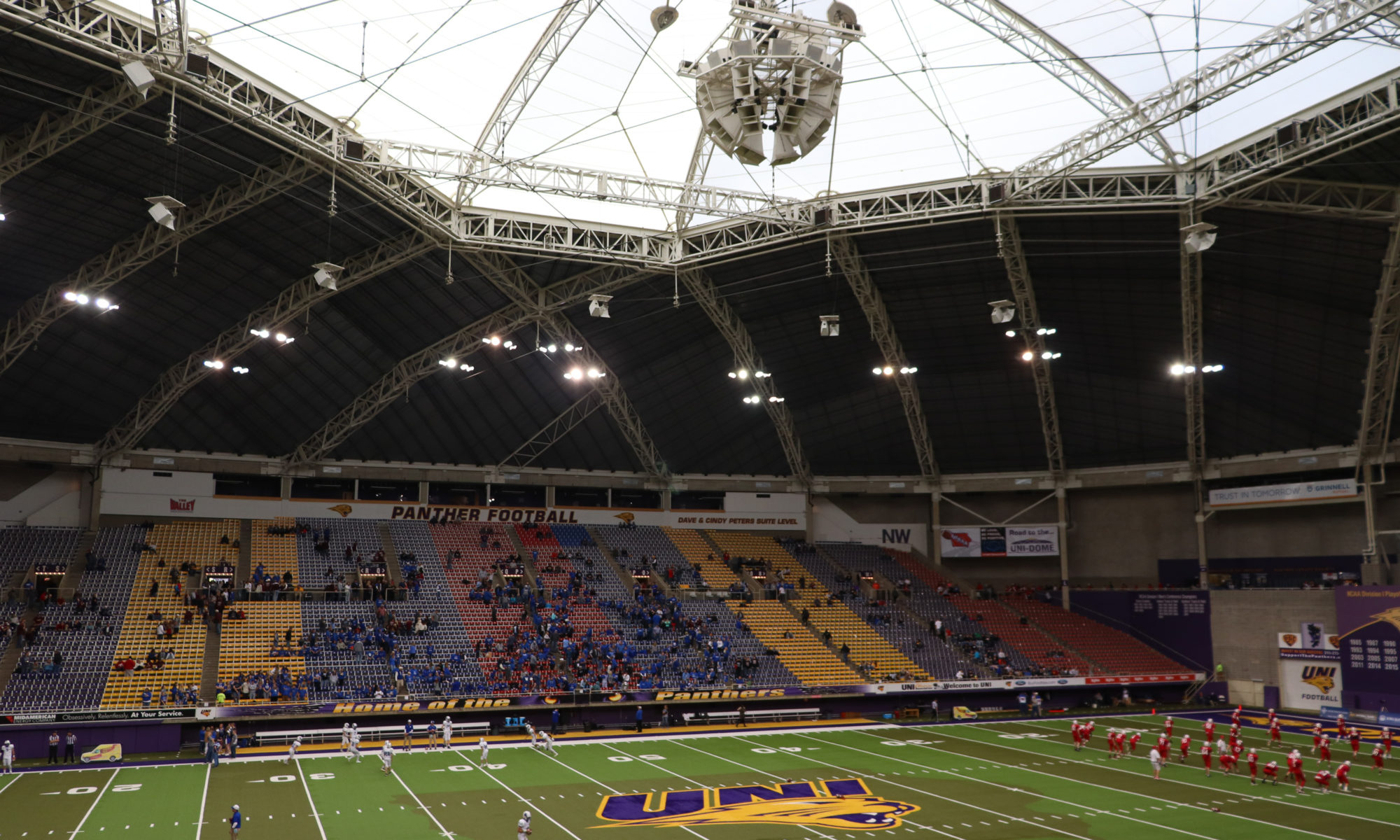 This week was my fourth trip to Iowa for either the state finals or semifinals. All semifinal and final round games are played at the UNI-Dome in Cedar Falls at the University of Northern Iowa. It’s a great venue for a game. And hosting all twelve semifinals is a great weekend of football.

Four games are played each day for three days. 8-Man and 3A on Thursday, A and 4A on Friday, and 1A and 2A on Saturday. As you notice, Iowa has both an A and a 1A classification. I’ve tried to figure out the logic there, but I’m just told that’s the way it has been. Apparently there was 1A-4A, and with 8-Man an attempt to create a ‘smaller’ 11-man class created A, rather than realign the numbers or to create a B, or something else.

After this weekend, the six titles will be played over two days, on Thursday and Friday, at the UNI-Dome. This leaves Saturday open to host a UNI football game.

For the semifinals, there’s four sessions with each session costing $10 for a ticket. Parking is $10, while programs are $5. For Friday and Saturday, the sessions are the entire day. With games starting at 10am, 1pm, 4pm, and 7pm. While Thursday is two sessions. The two 8-man games are played at 9am and noon. While the second session is held at 5pm and 8pm of 11-man games. The reason given is that UNI wants the stadium to use for practice between those games. Also, there is some breakdown of the field that’s lined for 8-man.

Of which, 8-man uses the south endzone and goal post, and then there’s a goal post sitting at the opposite 10 yard line. While yellow tape is used to mark the narrower 40 yard width field sidelines. This makes the south 40 yard markers accurate, while the other 30 is the 50, 20 is the 40, 10 is the 30, and the goal line is the 20. Unlike Texas for 6-man, where the 50 becomes the 40 and they just move the goal posts up to the goal line and mark the ten as the new goal line.

Aesthetically, it does play with your mind whenever the ball is at that end of the field in iowa. Plus, the enormous midfield logo is no longer centered at midfield.

The highlight of the weekend, was the Valley-Bettendorf game on Friday night. It was my 1,000th varsity football game of all-time.

For the trip itself, was a drive with my friend. This time we met up at his place and drove his car the 600+ miles to Cedar Falls. We stopped for dinner right before crossing into Illinois at a small place called “Benjamin’s”. It’s a small family owned place with great food that’s really cheap. The place was packed and an easy decision to stop and give it a try. The beef tips and noodles was great.

On Wednesday, it was a stop in Bettendorf at Pizza Ranch. If you’ve never been, this is a great place to stop. Known just as much, if not more, for their chicken than their pizza, the all-you-can-eat style place is regularly busy, and it’s cheap. $10 for your meal and drink.

On Thursday, my usual choice for a meal between sessions is at HuHot, another one of those great places for a decent price. A hibachi grill restaurant. Located just east of the school campus along University Blvd.

Friday was four straight games at the UNI-Dome. The last two games ended quickly, and the final whistle was shortly before 9pm.

Saturday, though, was an entirely different story. The day started early with breakfast at J’s Homestyle Cooking. A great little hole-in-the-wall just south of campus. Great omelets. After that it was a quick drive up to the stadium for another day of games.

The first game put things late, and the final game didn’t kick off until almost 90 minutes late. And that game, a one-sided affair between the only team with more than 2 losses (Williamsburg) were the decided underdog, but still managed to avoid a running clock. The final game ended quickly, though, so the final whistle was still a bit later than expected.

Found out that it’s pronounced “Aw-dih-bin”, not like you’d expect. At least according to every announcement and fan I heard pronounce it. Both teams were new for my all-time list.

Have seen both teams previously. Both last year.

St. Ansgar is a public school from the town of St. Ansgar. Their nickname is the Saints. Another game with two new teams.

Saw West Hancock last year. Woodbury Central, or WC as they were known, was a new team for me. This was my 999th all-time game.

My 1,000th game ever. It appeared it might be a good game. I’d seen both teams previously. I’ve seen all four 4A teams before. Last year, Bettendorf was involved in my ‘game of the year’ until the tail end of the North Shore-Duncanville dethroned it. But, this game wouldn’t be that good. At all. Valley dominated most of the game and won easily, 35-7.

Two teams I’ve already seen before. And a game, just as the first 4A game, a blowout.

Finally, a new team. West Lyon is located in the furthest northwest corner of the state in Lyon County. The school located just north of Inwood, just a few miles east of the Sioux River. One of the better games on the weekend.

Algona is from northern Iowa. OABCIG is from northwest Iowa. The school goes by OABCIG, but technically still is written out “Odebolt-Arthur-Battle Creek-Ida Grove”. Though in almost all forms it’s shortened to its initials. The school only recently incorporated Ida Grove. The four towns exist along US20 in northwest part of the state. And once again, two new teams to see.

The last game of the weekend was a bit anticlimatic. It featured the only team with more than two losses. Waukon was the decided favorites and managed just four touchdowns and four two-point conversions to win much easier than the score might indicate.

I’m not quite sure what’s up for next weekend. I’m going to be around Ohio and Pennsylvania. So, a game at Slippery Rock or Clarion is most likely on Friday. And the doubleheader at Norwin on Saturday. However, I might make the drive to Syracuse for two Friday night games. One of which features CSP playing Tioga at 5pm. But the drive back and then down to Norwin is a bit of a stretch. Coupled with a Sunday NFL game in Cleveland. I could just spend the night in Syracuse, but then that’s a really long drive on Saturday night. I could duck out before the finale, which features the homestanding Cicero-North Syracuse Northstars, but may not. Odds are, though, I’ll stick with PA.

Looking back over the season, it’s interesting to see that the first two teams I saw, Corner Canyon hosting Orem, are both in the Utah state finals. Both were defending champions at different classifications. Hence the intrigue and importance of such a match-up. DeForest, the team I saw host a first round game in Wisconsin, are in the state final this weekend at Camp Randall Stadium. Both Columbine and Pomona, the two teams that played in one of my top-five games this season, are both alive for the 5A championship game. And elsewhere in Colorado, Kit Carson, the juggernaut 6-man team that easily beat Cheraw when I was there earlier this season, the #1 team in the state, lost at home to Fleming. Their intracounty rival Cheyenne Wells, too, lost to defending state champion Liberty/Stratton at home. In Minnesota, after Win-E-Mac beat Warren-Alvarado-Oslo to advance to the semifinals, the Win-E-Mac Patriots lost in the state semifinals.

In New York, the South Park Sparks were upset. But, the Section 6 teams of Clymer/Sherman/Panama, Southwestern, and Maritime/Health Sciences remain in the hunt for a state title going into the state semifinals.

And in Montana, the Wibaux Longhorns travel to Jordan and face Garfield County for the A-6 Final. I have seen both teams play. And I’ve seen a game at Jordan. This will be a rematch of last year’s state final. 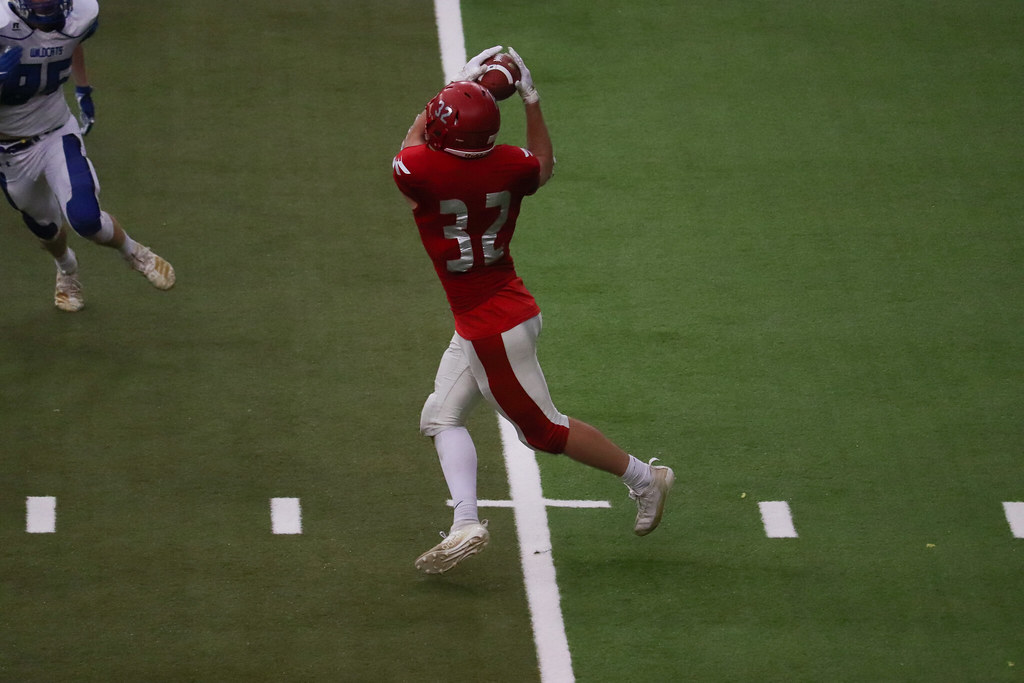 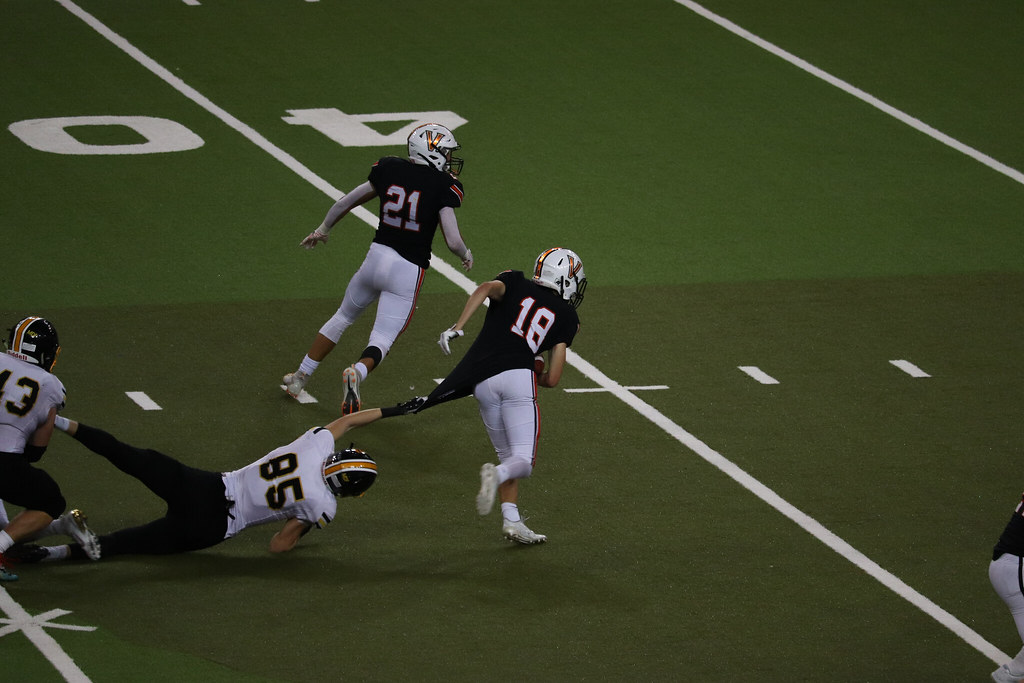