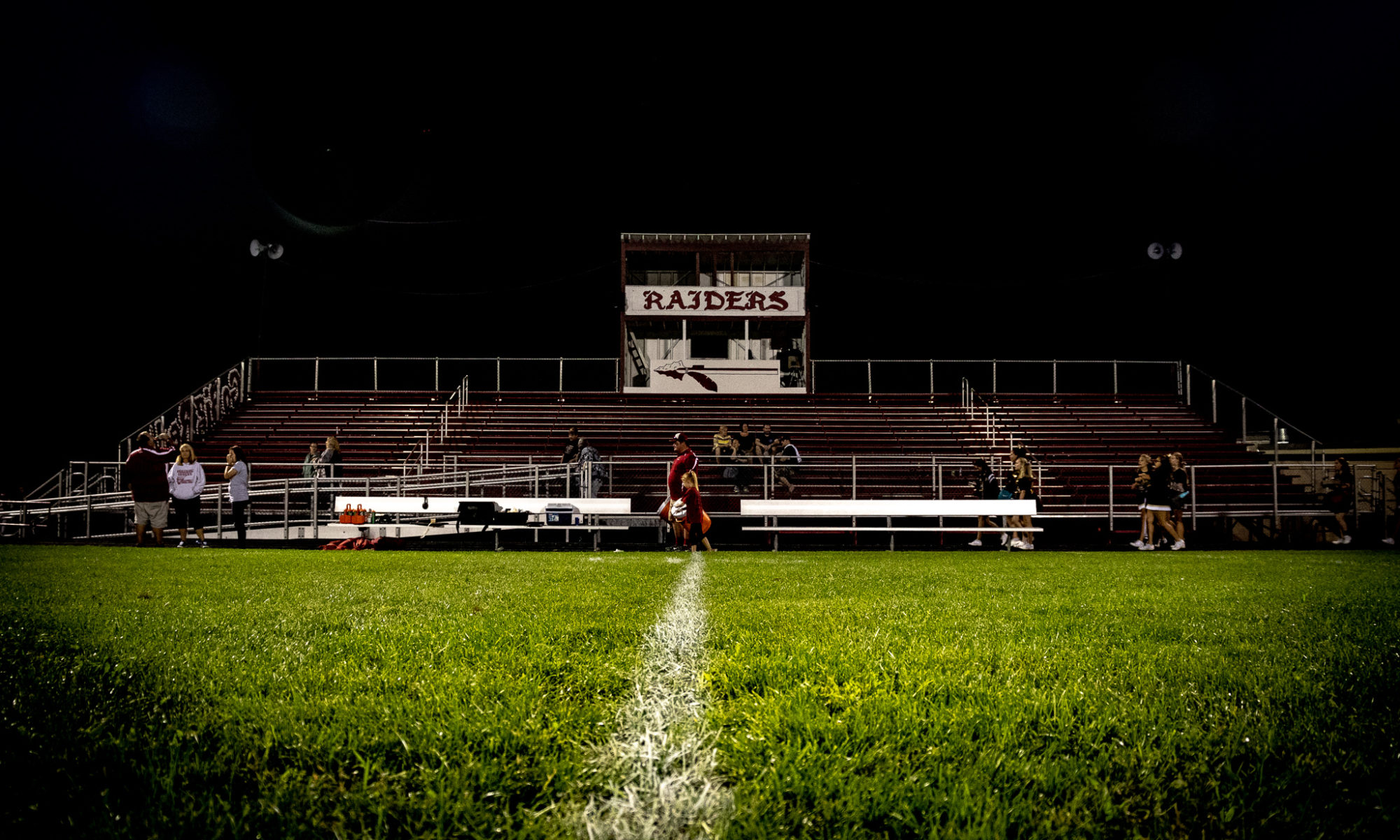 Similar to how Clarion County (PA) handles the Autumn Leaf Festival, however in order to attend the game you must pay to enter the fair. Admission to the stadium itself is then free. This $9 charge may seem a bit much for a high school game, but you do have an entire fair to check out before or after the game.

The grandstand was, at one point, referenced as the “Fair Bowl”, though there’s little online I can find on the stadium’s official name. The field, though is now named Howard J. Devol Memorial Field.

The game wasn’t expected to be close. Eastern kept it close for a while.

But, Caldwell slowly kept extending their lead. Eventually winning, 38-6. The game featured a light rain in the second half. However, the benefit of the grandstand is the nearly fully covered roof. After the game, it was a long, slow ride home.

Friday was a dilemma. I had plans to head to Greenville and stick around for their game against Grove City. Though, after watching them play Northwestern in Week 1 and Grove City’s annihilation of Fort LeBoeuf meant that I was hoping to find a better game. But, I was still stuck within about an hour of Greenville.

After the game started, though, I found it nearly impossible to upload pictures. So, I was stuck with some meager text updates throughout the game. That being if my phone and cell towers cooperated.

With the game over, I finally found cell service again and got one of the best pictures of the day to upload.

Conneaut started off with an acrobatic touchdown on their first drive and never looked back. Conneaut wins the Crawford County Showdown, 48-6. @WPAFootball pic.twitter.com/WXPx2hYFMt

After returning home, it was a mix of options for Saturday. St. Clairsville (OH) had a 7pm game scheduled against Pomeroy Meigs. For most of the offseason, this was the plan. Either Western Beaver or Linsly would provide the matinee. Until Pine-Richland scheduled Hempfield for a Saturday afternoon. But, then Cameron County in Emporium scheduled their home opener for Saturday night. The only question was an afternoon game. The only real option was Summit Academy near Butler.  It wasn’t the best game. There’s little real seating. But, Summit Academy gives you one of the most unique views in high school football.

A large number of fans sit beyond the north endzone up on the stepped hillside. Shielded by trees, it’s a nice, cool place to watch a game. It does provide a bit of obstruction. But, the unique view and cool comfort of sitting anywhere on the hillside on provided folding chairs or those who brought their own make it the place to be.

The lone scoreboard went haywire, however. And the majority of the game was finished without it.

Scoreboard went nuts late in the half. It's now off. Apollo-Ridge still leads, 14-0. #15 pic.twitter.com/0MJlqDqUbz

The unique location did provide for some equally unique pictures.

Then it was a long drive east to Emporium, deep into District 9.

Now, this game never really stood a chance to be competitive. Cameron County entered the game on the heels of a 71-0 loss to Coudersport.  The Red Raiders kept it respectable for the first quarter, though it was clear that Curwensville was the better team.

The atmosphere, on both sides, was lively and spirited. You never would’ve guessed the home team was trailing 58-0 after three quarters. The kids went out there and fought hard each and every play.

In the end, Cameron County finally cracked the endzone for the first time. It brought a big cheer from the home side, and even a bit of a friendly cheer from the Curwensville side.

Cameron County finally gets on the board this season. 7 yard run to pay dirt. Still trail Curwensville, 58-6. 5:31 left in game. @WPAFootball pic.twitter.com/ZCuo6rHKuz

Curwensville went on to win, 58-6. After that, it was another long drive home. Nearly three hours after seeing a game up in the mountains at a beautiful small stadium settled in between two mountains, in a long valley. Definitely a fun and memorable night out at a game.

For photos of other games, visit http://www.flickr.com/sykotyk/sets/