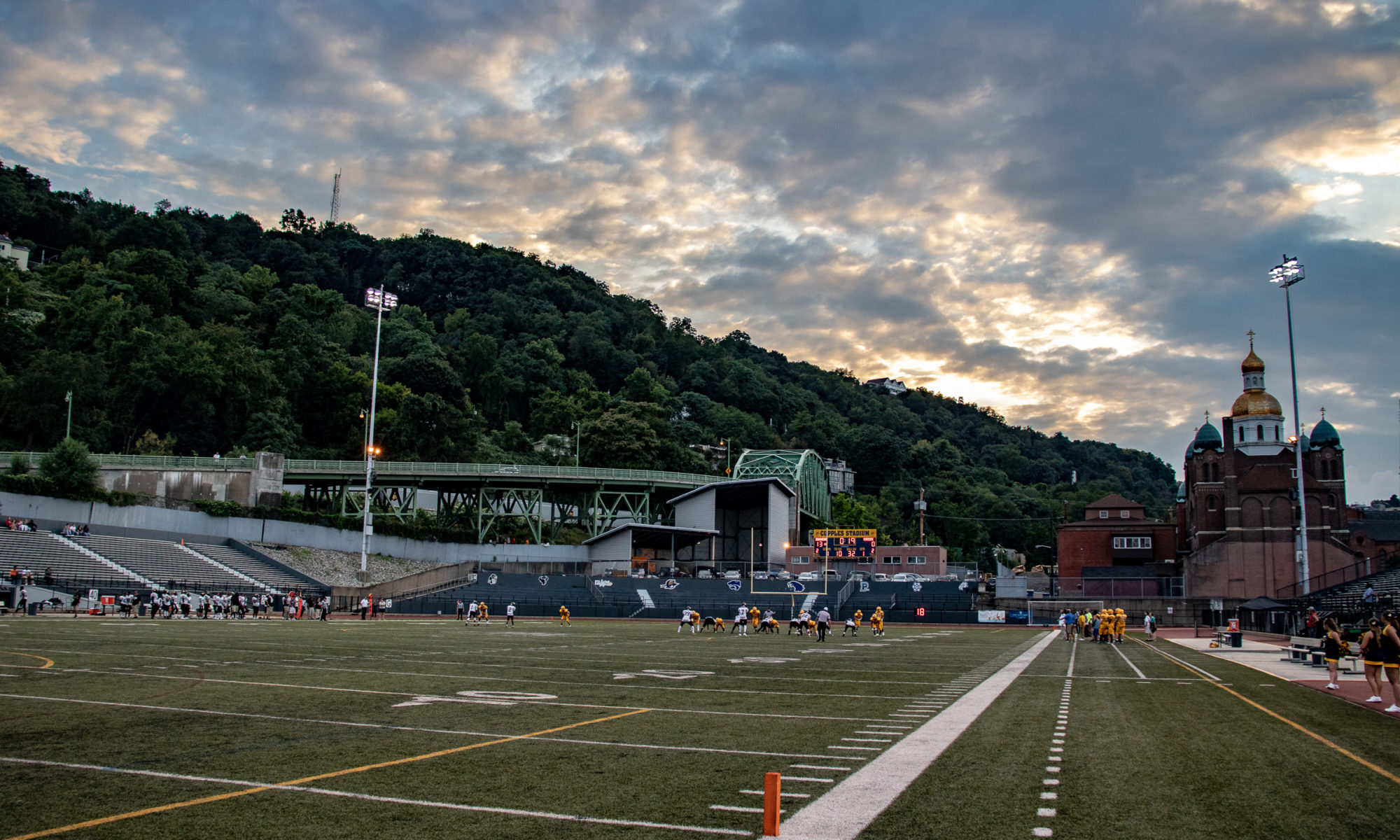 Week 3 ended up being far more than I originally planned. Four games were planned between Thursday and Saturday. But then two things came together. Projected rain on Friday and Saturday, and a rare Wednesday night game out east.

So, I reworked my plans.

Though I knew the game well in advance, I hadn’t planned on it. In retrospect, I’m glad I made the three hour trek to the small town of Renovo. Dwyer Field is, without a doubt, one of the most beautiful places I’ve seen a game. And I thought Cameron County’s stadium in Emporium last weekend was one of the best.

Nativity BVM 14, Bucktail 6 – Half #17 @PaFootballNews This is one of the most picturesque places I've ever seen a game. pic.twitter.com/QEoMKRJUdM

The stadium was tucked along a river in a long valley between two rather imposing mountains. The visiting fans witnessing one of the best views. Even with a 6pm start, the sun was already on its way out by the end of the first quarter. Dipping down below the staggering mountain to the west.

The game, though one-sided, wasn’t without some controversy.

Officials ruled this player down before the fumble. Nativity BVM has now tacked on two 2-yd rushing TD to extend their lead, 28-6. Near the end of the 3rd. #17 @PaFootballNews pic.twitter.com/erkLNf3Quq

Nativity wasn’t the only ones having a good day. The mosquitoes had a feast. The combination of temperature, weather, locale, and time of year made the area of the stadium teeming with mosquitoes.

Originally, I had planned a long Thursday night trip to Buffalo for a game at the venerable All-High Stadium. But, with the three hour drive there and back to Renovo made me adjust my plans. Cupples Stadium was much closer and with another long Friday drive, a breather for a weekend of long travel.

Cupples Stadium is a vastly underrated stadium. Parking my be limited. Crowds may be small. But its location on Pittsburgh’s south side makes for some great vistas of the hillside to the south and the city to the north.

I never expected this game to be that close. But, 56-0 nothing wasn’t what I had in mind.

Friday then had a lot of options. With rain playing a key role in the decision making. A band of rain to the south made Friday night treacherous. With lunch in Hermitage, PA, I was considering a northern District 10 game. Something near Erie. Maybe Fairview v. Sharon or North East or Fort LeBoeuf.  However, as I watched the forecast update again and again, the rain passed through southwestern PA earlier than expected and I made my mind up for the 2 hour-plus drive south to Mapletown.

Why Mapletown? Why not? The Maples made a bit of news the previous week after forfeiting against Clairton. A rash of injuries from their opening game, a 14-12 loss to Avella, left them shorthanded. I had originally penciled in a trip to New Brighton for their game against Ellwood City Lincoln.

But, a small school struggling with numbers is something I can support. A team playing just to play. No allusions of state titles on their horizon. They play to play. Friend to friend, teammate to teammate. A team like that could use a bit of support.

And you never know if or when it will be their last game. Youngsville was on my bucket list for a long time, and now the stadium sits dormant on Friday nights.

And in Mapletown, what a Friday night it was…

Mapletown Stadium is one of the more interesting ones. A confluence of necessity and economics made for interesting bedfellows. The home and visitor fans sit on the north sideline. Assembled on the hillside, the stands are a series of steps, braced with old roadside guardrails and each step filled with dirt and a layer of rocks. Modern, and nice, metal bleachers are pressed into the Earth, providing comfortable and common seating for fans amid the unique setup.

Saturday, then, was another long day. A nearly 3 hour drive home Friday night was combined with a nearly 3 1/2 hour drive to Buffalo. Why?

On my way to Buffalo. One of the rare times the All-American City has better weather. Stay dry everyone. @PaFootballNews @WPAFootball pic.twitter.com/KTyS8wvcIT

Pennsylvania and Ohio had plenty of Saturday options. But, so did Buffalo and northern Pennsylvania. Trading my Thursday for Pittsburgh, I decided to take in an All-High Stadium game on Saturday at a rare 1pm start. Kane, meanwhile, had a rare Saturday night game scheduled for 6pm against Bradford. From All-High to Kane would be a 2-plus hour drive. And the risk of rain.

Neither team could do much offensively. Turnovers ruled the day. But, finally taking a game at All-High Stadium made up for the poor play.

That first half touchdown was on an 11-yard play. South Park, aka the Sparks, got the ball after MC/HS attempted a pass on a 4th and 36 from their own ten yard line. The same play they tried on 3rd down. Neither were successful. As the game wore on, that blunder proved to be all the points South Park would need.

But, despite that, after MC/HS gave up possession, South Park drove the field and tacked on one final score to make the lead insurmountable.

South Park scores on a 19 yard TD run. Meanwhile MC/HS No. 3 is being abducted by aliens. South Park leads, 12-0 with 1:19 left in game. #20 @PaFootballNews pic.twitter.com/MeScGnSHlb

Despite the lack of scoring and the general sloppiness of play. It was a fun afternoon at one of the best stadiums in a 200 mile radius. All-High Stadium on a crisp Saturday afternoon should be on any High School Football fan’s bucket list. Tickets are cheap, at only $2. And there’s always a good seat available. Chair back seats down low near the 50 and bleachers–new bleachers–everywhere else.

The field sits in the shadow of Bennett High School to the west endzone.

After the game, I had two options. Kane had a game starting just 2 hours and 27 minutes later. Over 100 miles away through mostly two-lane, semi-mountainous roads. A drive I did before but I had already seen a game at Kane. And seen Bradford play.

The early start meant getting home an hour earlier and being an hour closer to home meant maybe being back by midnight. However, I wasn’t up for the drive.

An unusually scheduled Saturday night game in NYSPHSAA Section 6, it meant a a leisurely trip 30 miles south of Buffalo for a 7pm start. Which meant a stop at Texas de Brazil in Cheektowaga. One of the few places I’d say justify the hefty price tag.

Though I had seen Lake Shore just last year when they hosted eventual state champion West Seneca West on a Thursday evening, this was my first time seeing Eden/North Collins. The Pirates had a brand new facility with track, turf, scoreboard, buildings, and walkways. A small, single span stand on the west side of the field. Tickets, again, were only $2 for adults and free for students and children. Free one-page programs or roster-sheets were available for fans.

What’s amazing, is that Eden cancelled their season back in 2015. But, they had the numbers to return in 2016. Like many other smaller New York schools, they already had a co-op formed with neighboring North Collins but it wasn’t enough to save the team in 2015.

Eden and Lake Shore are Class B schools. Which is the third level in New York. The largest being Class AA. Then it goes A, B, C, and lastly, Class D. Due to a rash of consolidations, Class D now only has four teams. The rural areas south and west of Buffalo are rife with co-ops. Just this year, Randolph and Frewsburg formed an ’emergency co-op’ to keep both schools with football. Randolph was a recent Class D state champion. However, unlike PA where they generally just recognize the ‘host’ school, NY makes reference to both, or all three, regularly. Such as Maritime Charter/Health Sciences or Eden/North Collins.

The Eden game, itself, wasn’t that great. The Pirates jumped out to a 39-6 halftime lead. On the backs of several turnovers. Lake Shore did come together with a 63-yard TD and a wide receiver option pass deep for a TD. But, after making it a three TD game, Eden shut it down with long, sustained drives.

After the game was a long 3-plus hour drive home. Including the leisurely drive down US20 rather than the New York Thruway.

For more pics from this weekend’s games, go HERE.

For previous weeks and seasons, go to http://www.flickr.com/sykotyk/sets/