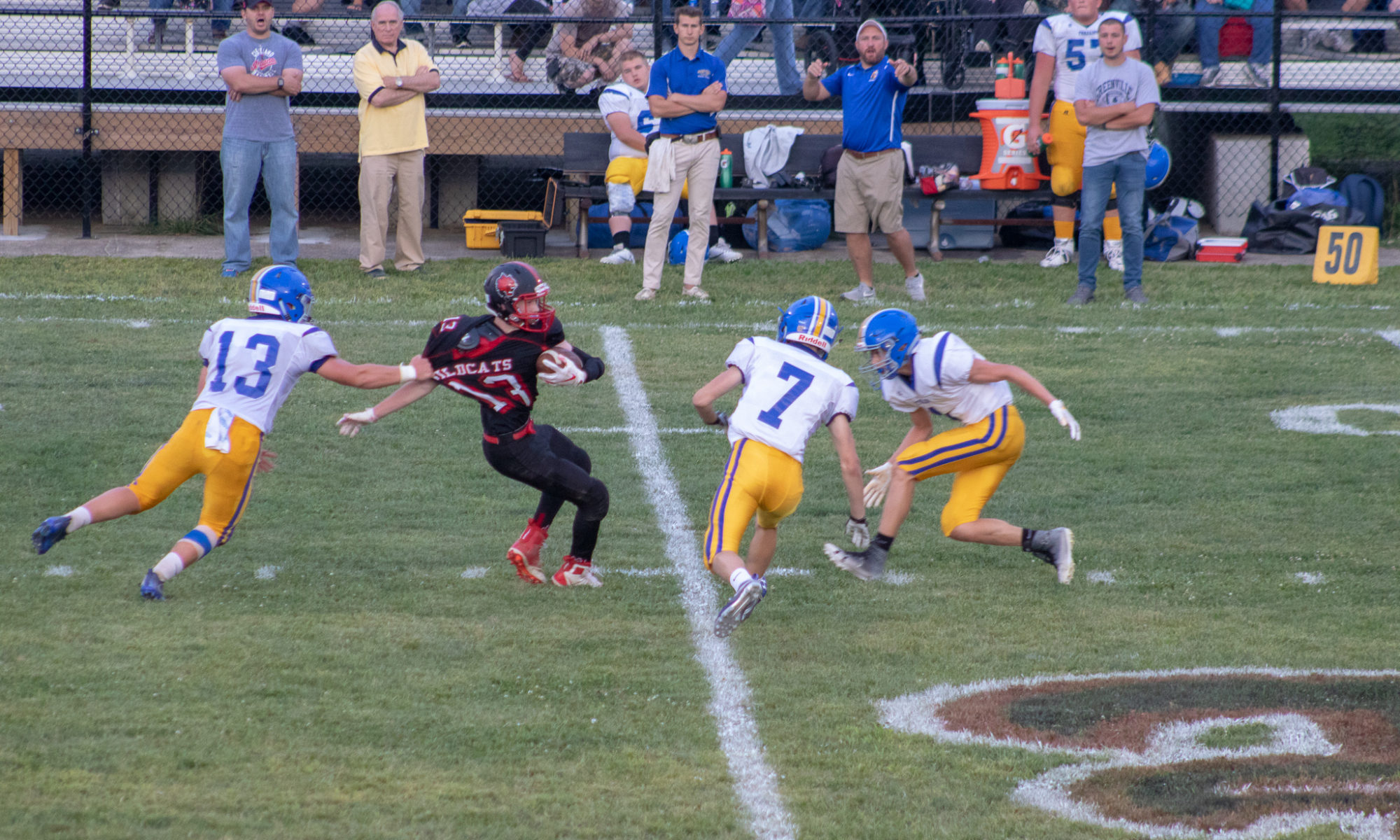 The game itself wasn’t much of a contest. Beaver Local was unmatched through most of the game. But, it was the first time I’d been to Wellsville for a game. It’s a great stadium, but the strange use of tall chain link fencing along the sideline is questionable at best.

Friday night was opening night in Pennsylvania. District 10 kicked off with Northwestern in a rematch of their final game of the 2017 season, against Greenville.

Northwestern has a great stadium, if it were modern. The old wooden planks aren’t exactly something that exudes ‘safety’. At least it’s mostly enclosed so you don’t feel like if you don’t break one of the planks, you might slip between them. But, you’re close to the action, there’s no track, and their fans bring a particular energy to the game.

Northwestern No. 13 tackled by Greenville No. 13 on a short punt return. Northwestern still leads, 7-6. Now with 6 minutes remaining in half. @ETNreisenweber @BobGreenburg @vindyblitz pic.twitter.com/q3039RcQuT

Greenville’s defense played well. But, the offense sputtered along. Leaning heavily on their senior running back making up the bulk of their offensive threat. After watching the game, the loss wasn’t unexpected, even if still disheartening.

There was some levity to the game, however:

Not sure what to make of the Northwestern dancers. But I think they were attacked by a crafts store. pic.twitter.com/KScLiwW03p

Northwestern 19, Greenville 12 – Final #8 Wildcats ground out the fourth quarter on the ground. pic.twitter.com/nPmZo53I1Q

After the long drive home, it was an early morning to get to the famed Wolvarena for an 11am game between Imani Christian and Richard Wright Charter of Washington, D.C.

There wasn’t much to say about this game. The scoreboard says enough.

The next three games were a blur. One half of good football between Erie and McKeesport was the highlight of the four-game day.

During the third game, once again, there were six-minute quarters in the second half. This time between Aliquippa and McKinley Tech.

And after three, mostly forgettable games, it was on to the host to try and make the day memorable.

In the end, it wasn’t meant to be for the Wolverines.

Overall, for the weekend it wasn’t much memorable. The closest game saw Greenville go down in defeat. Overall, it was still six games in three days. Saw two new venues in Wellsville, Ohio and Albion, Pennsylvania.

For all of the pics from Week 1, go here.

And all of my games can be seen at http://www.flickr.com/sykotyk/sets/