Week 3 ended up a bit more local than I had thought. My original Week 3 plans included trips to Punxsutawney, Erie, Youngstown, and New Philadelphia. But, with a Browns game on Sunday, decided to stick a bit closer to home on Saturday night.

Originally, with the update from Youngstown the game would be at 7pm, the only daytime option was Summit Academy hosting Washington. However, the East-Perry game was moved back to its original time of 2pm, which meant the rare Saturday night game at Shenango would be a short 20 minute drive from my house. Or so I thought.

The drive to Punxustawney wasn’t too noteworthy. I took US422 rather than I-80, and cut over from Indiana. It did give me a great shot of the welcome sign: 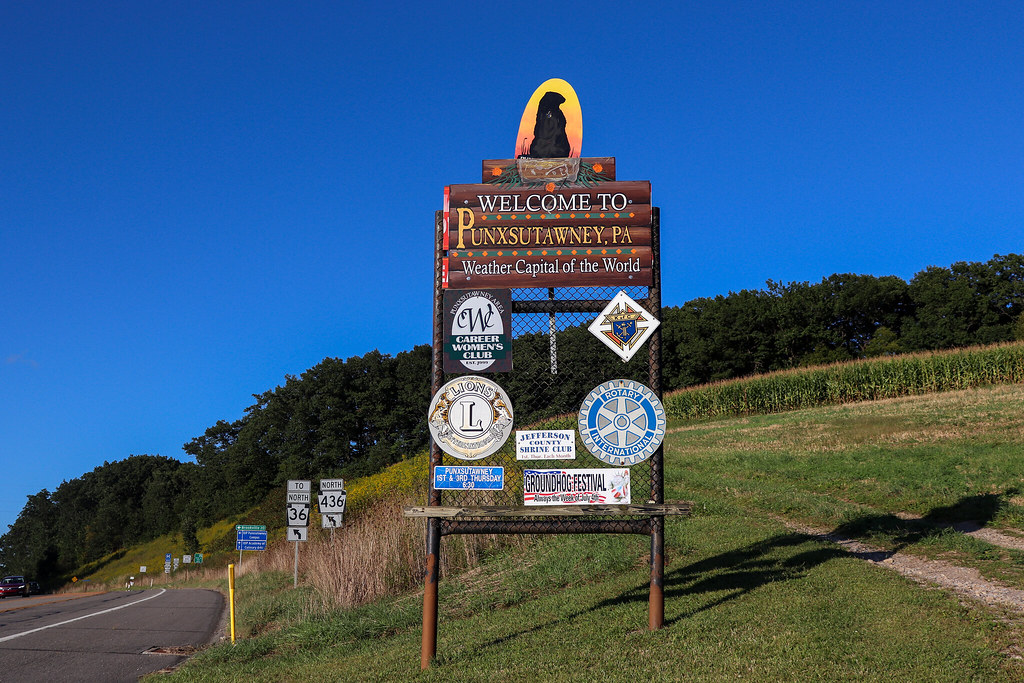 The game wasn’t looking to be that promising. Punxsy had lost badly in both previous games. And Brookville looked like they should win easily. However, Punxsy got on the board first and led 6-0 before Brookville scored on their first offensive snap to take the lead back. Eventually, they’d distance themselves, leading 35-6 after 3 and winning with an additional field goal, 38-6.

Aside from the game, food was cheap. $1 for water and candy bars. $1 for a small rally towel and $2 for a very nice program.

Friday night, then was a trip to Erie to mark off another one of the District 10 stadiums. This time, using a Greenville game in the process to see Iroquois’ John L. Post Stadium.

It’s a decent venue just east of Erie. A slight mix of industrial and residential around the school, including part of a bridge overpass in the southeast corner. The stadium is turf with a track. And a large sign dominates the north endzone stating the stadium’s name.

The stadium had $2 programs. One, strange, thing that happened was that the band and cheerleaders were mostly off the field for Iroquois’ introduction. Just a small two lines and a banner in the south endzone for a run-through, while the band remained in their small stand behind the north endzone.

As for the game itself, it was over pretty much before it began. Greenville opened up a huge lead and kept pouring it on. 36-0 after one, and 43-0 at the half to setup the running clock.

It was a spectacular night for football, though. Until the clouds rolled in and started sprinkling just enough rain to be a nuisance. But, the second half finished fast enough.

After the game it was a long drive home.  With a Browns game on Sunday, I had decided to rework my Saturday plans. With the East-Perry game now at 2pm, I decided to forego the Mogadore-Shadyside game in New Philadelphia to stay closer to home and see the Shenango-Western Beaver game at night. But, my night was not going to be an early one.

Rayen Stadium in Youngstown is a great stadium. The field, however, needs some work or needs turf now that two teams call it home. Today, however, was a East Golden Bears home game. I had been here just a few years ago for an East-Canfield game, back when East was still the Panthers.

In Youngstown’s history, East was once a school known as the Golden Bears. Along with such opponents as Chaney, Wilson, South, Rayen, and North. During the last major restructuring, Wilson and Rayen were closed, while a new East was built and Chaney was merged into a STEM school under the umbrella of East. Forming a ‘two building, one school’ setup for OHSAA purposes.

The new East, when chosing a sports name, was left with a vote that resulted in the Panthers. A near clone of the NFL team in colors, as well. Some wanted the Golden Bears, while others had decided “Wrens” would be a good name with a nod to the past, now closed, schools, Wilson, Rayen, East, North, and South.

But, with the move to reconstitute Chaney as a full high school once more, meant that East wasn’t the only school, and with bringing back the Chaney Cowboys, also brought back the East High team as the Golden Bears.

Both teams share Rayen Stadium on Youngstown’s northside. The field was renovated to give Youngstown schools their own true home field after years of playing at Stambaugh Stadium on YSU’s campus.

Now, for the game itself, this wasn’t a good game. At least for the second half. Perry did everything possible to keep it close through 24 minutes. A pick-six, and two touchdowns made it only a 21 point game at the half. But, the third quarter unleashed four touchdowns to get the running clock going. And two more in the fourth quarter. The lone Perry TD was on a kickoff return after one of East’s numerous TDs in the fateful  third quarter. 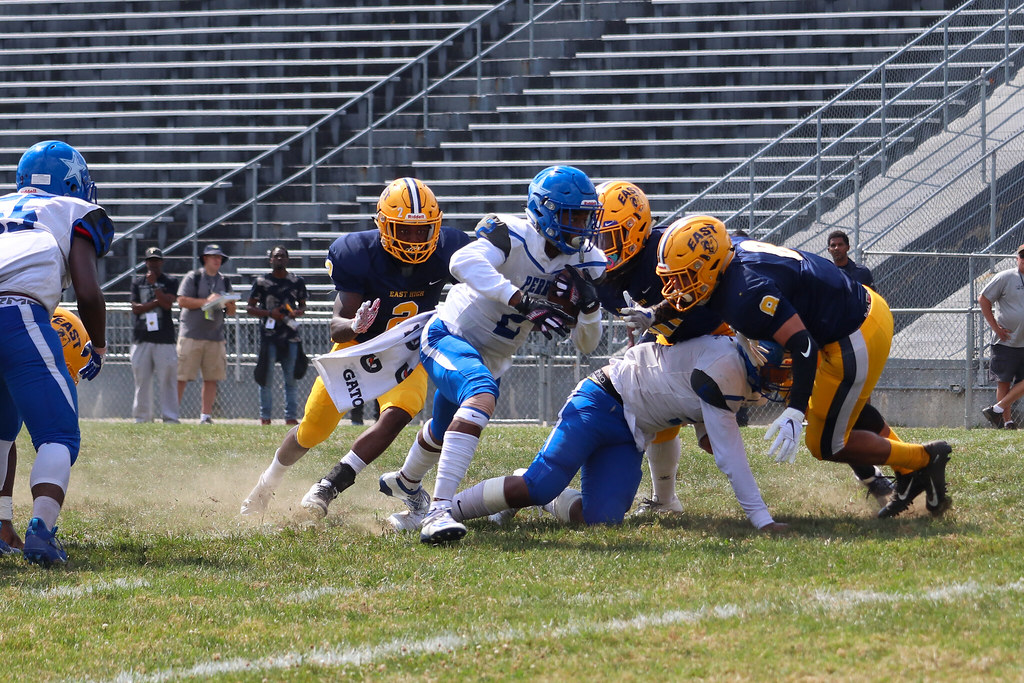 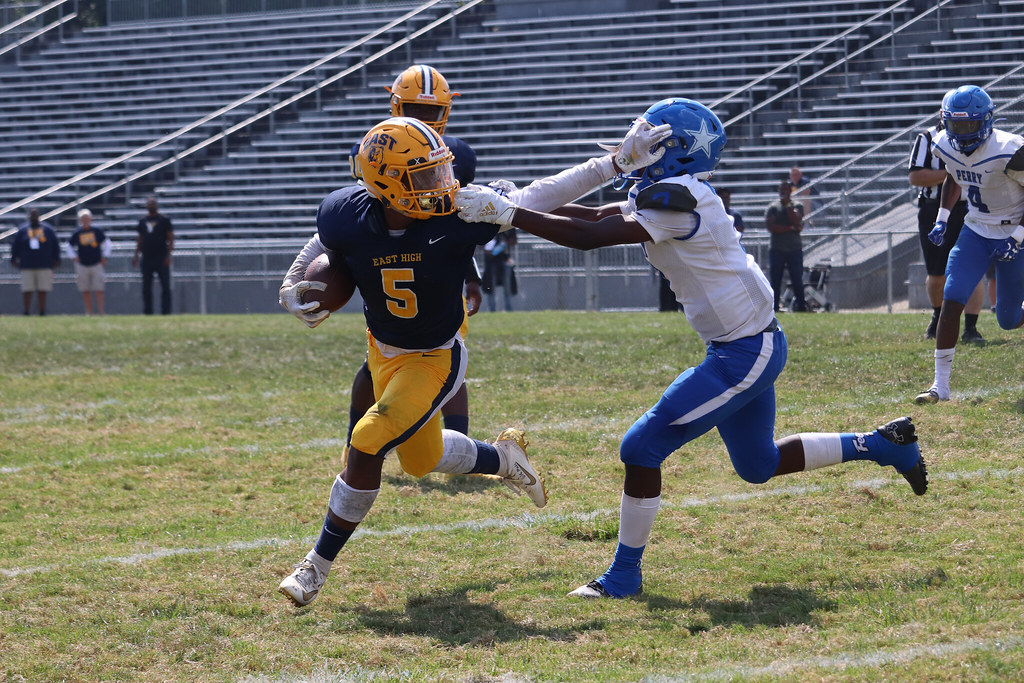 After the game was a short drive home, and then on to New Castle. I stopped at one of my favorite Chinese restaurants. It’s a hole-in-the-wall type place. China Banquet in downtown New Castle. It’s cheap. But it’s good so it’s worth the price. Not a huge selection so you have to want what they have. But their Chicken and Mushrooms and Chicken and Broccolli are both worth the stop. The other option is a Mediterranean place near Shenango High School called Elham’s, but for Saturday afternoon was busy and not nearly as cheap. Or fast.

Getting to Shenango for yet another game, my fourth overall, meant looking for a souvenir. I almost always get a program if one is available. And a towel or something if it’s not or if it’s cheap. But, my first time seeing a mini-helmet made my decision for me. A replica mini-helmet for only $25. Yes, it’s a bit pricy when it’s not even your team. But, this is something more schools should do. Initial upfront cost might be an issue, but they will sell. Eventually. This is a photo of mine, sitting on the roof of my car after I returned to it for safe keeping while at the game.

Despite that looking like the start of a dance number, that’s the ‘run through’ at midfield prior to the game. Calpreps had this game listed as Western Beaver 42-17, and Shenango was out to prove them liars. A stout defense and simple, methodical offense led to two first half scores and a stymied Golden Beaver offense, 14-0. But, just after their third TD scored in the fourth quarter, Western Beaver came alive with under 5 minutes to play. A touchdown, and then another quick touchdown with 1:38 left was going to make the end interesting. Before one of the worst onside kick attempts you will ever see.

Shenango then ran out the clock to secure their second win of the season.

After that, my short drive home took over two hours. I had to run up to my parents to pick up my daughter from her ‘sleep over’. That and an early drive to Cleveland for the Browns game left my Saturday night and Sunday a mess of a schedule. Hence, the Thursday early AM update for the previous week.

My Week 4 games are in limbo due to weather. I may or may not (probably not) see a Thursday night game this week. Though, there is a doubleheader in Pittsburgh on Friday I’m still hoping to catch.