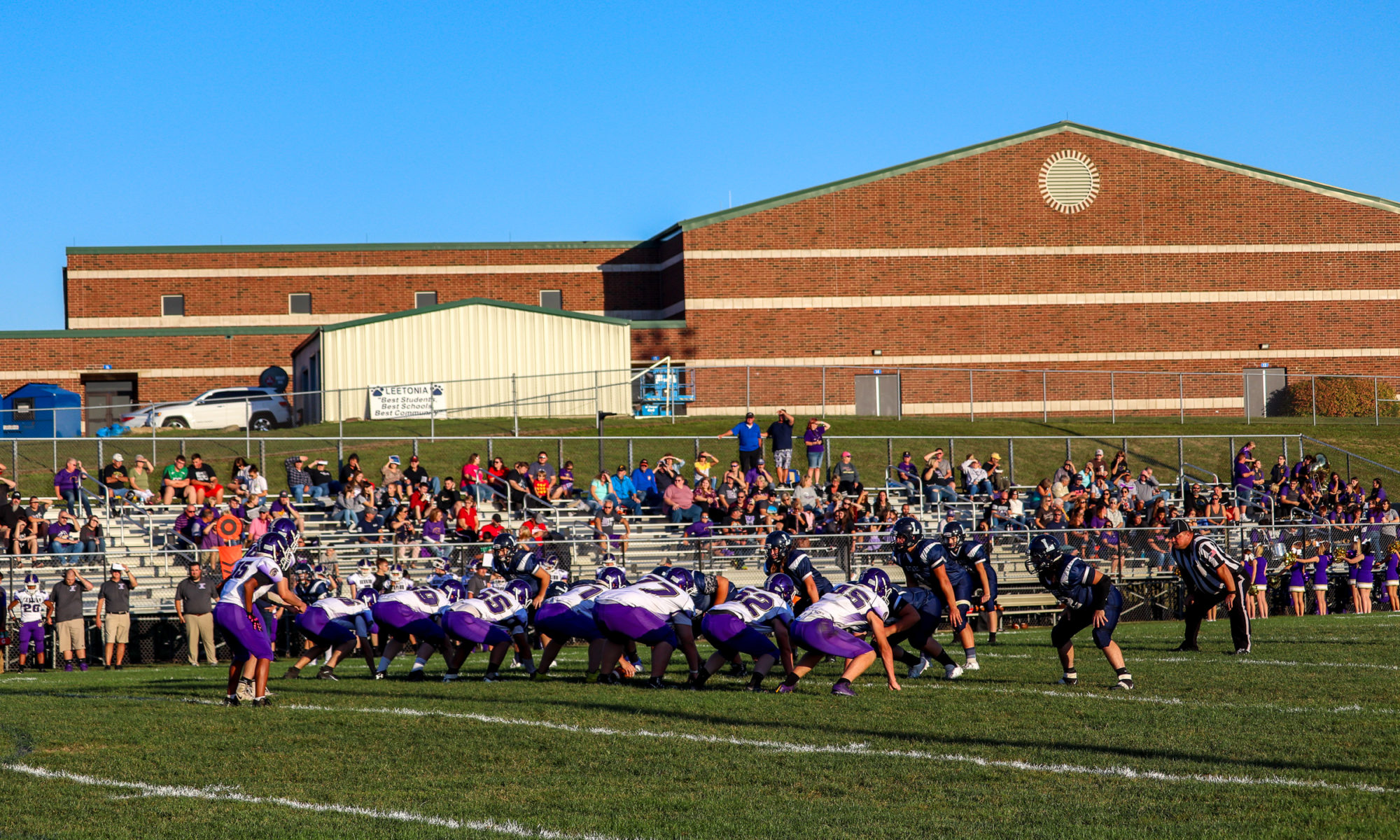 Week 2 opened in Ohio. With the OHSAA bumped back a week starting with this cycle, meant OHSAA Week One games were this weekend. And as with most years, a number of Thursday games in the Mahoning Valley kick off the season.

There were games such as Chaney-Mooney, or Marlington-Poland, but there was one game that was intriguing to me for purely my own reasons. Leetonia was hosting Sebring McKinley. Two small schools and a chance to see a home Leetonia game without giving up a Friday.

The game also started earlier than usual, with a 6:30pm kickoff.

Leetonia has a great stadium. It may be simple, but the bell tower, the marquee, and the fieldhouse layout works best. The port-a-potties are a letdown. But, for a small school, it’s a great facility. Programs were only $2 and the concession stand was a small food trailer in the southwest corner of the stadium grounds.

Leetonia uses a large run-through that you’d find more often in Texas than in Ohio. The field is grass and devoid of a track. Leetonia opened with a two-touchdown first quarter. And kept the pressure up that Sebring could only muster one TD. Leetonia wins, 28-6.

This was the second time I had seen each team. Leetonia played at Jackson-Milton a few years ago and two years ago Sebring McKinley hosted Lowellville. Both were losses.

The Friday night game was a school I had driven by numerous times. A team I had seen before. But, finally found time to see their rivalry game against Penn Crest District cohort Cambridge Springs.

Saegertown may not have had the best run of luck in football in the past decade or so. But, they’re a hardworking bunch and definitely play up to their rivals. Canon Memorial Field is a simple, small venue sandwiched between the high school and the elementary school. The facade of the high school dominates the southeastern corner of the stadium grounds. The home side sits on a hill, while the visitor’s side is simple, deteriorating wooden bleachers set low to the ground. The concession stand is to the southwest corner, a small standalone building. And the field house and restrooms are to the southwest corner.

The home side, inexplicably, faces west, but the large amount of trees coupled with the terrain leaves the field in shadows not long into a game, even in August. Programs consist of a sheet of paper, only noting the Saegertown roster. But the stadium has plenty of easy to access parking given its location. The lighting though, isn’t the best. Combined with the cooling night air creating fog and a blanket of condensation, which included the nazard of an official slipping on said condensation, made for a difficult second half with photographs.

For the game itself, Saegertown jumped out quickly with a fluke TD pass on their first offensive snap. But, Cambridge Springs answered quickly to make it 7-6 on a 4th down TD pass. A bad snap, by rolling the ball to the QB, after a defensive stop deep in their own territory, gave up advantage they had fought for. After the second touchdown by Spa, it didn’t seem like Saegertown was going to be able to muster the offense to match it. But, the defense stood up several times. Only to give up an easy TD on another bad snap late in the game. The final was 20-6.

Saturday morning, it was a short drive west to Akron for an interstate matchup between defense state runner-up Harrisburg at defending state champion Archbishop Hoban. This would be the fifth different field in Akron for me to see a game. The lone field remaining is Kenmore. Which I hope to get to later this year.

Dowed Field has a very difficult parking situation. Located across the freeway from the school, the parking lots are miniscule and despite the stadium’s size, the parking in the neighborhood doesn’t appear to be capable of reaching capacity. The field itself is nice. The stadium sits part of a complex with ballfields behind the visitors side. A concession stand, completely with picnic tables sits on the southwest corner.

For the game itself, Hoban jumped out with a first-play quick seam route that went for a touchdown. Harrisburg had no defense for it. It was timed to perfection. A second try of it didn’t go for a TD later on, but the Cougars defense struggled mightily against the run. A pick-six was denied by the defensive back dropping the easy ball. After a late TD in the first half to help prevent the running clock, a quick drive by Harrisburg was ended by an interception. An ensuing TD by Hoban setup the running clock and a late TD by Harrisburg wasn’t able to stop the clock after the conversion attempt failed. Leaving it at 42-12 which was the eventual final score.

With the brisk pace of a running clock game with a heavy running attack, meant a long wait for a 6pm kickoff in Norwalk. Originally, for the day, the plan was Western Beaver during the day and Tuscarawas Central Catholic at night. But with the interstate games taking place, seeing two new stadiums was an easy decision.

So the next game was Northgate traveling across state lines to Norwalk and the St. Paul Flyers.

Northgate had forfeited against McGuffey after last year’s game was disastrous. Norwalk St. Paul’s opponent was originally St. Mary’s Central Catholic from Sandusky, who had low numbers and opted for 8-man football this season. The two teams might not have matched up well, but the best factor was that both teams managed through without any major injuries.

Norwalk St. Paul shares Whitney Field with the local public school, the Norwalk Truckers. Unlike other venues, it feels like they’re equal tenants. Though a bit oversized for the private school, the stadium is nice, situated in town, with plenty of parking, and a bit of a commercial/industrial area beyond the visitor stands. The field is grass, with a full all-weather track. The scoreboard sits to the south end, and features both teams prominently. Entering from the primary parking area, the ticket booth, lockers, concessions, and bathrooms are in one building running lengthwise. The visitor lockerroom is a new building to the north end. The visitor stands currently are temporary and awaiting being rebuilt. As well as the parking area planned to be paved rather than loose gravel.

For the game itself, St. Paul just had a better team dynamic. Putting together two touchdowns in the first frame before the dam burst. Four more touchdowns were scored in the second frame, including on a botch FG attempt by Northgate late in the half after failing to score a touchdown. The chipshot field goal try went awry and St. Paul returned it to the house for the touchdown.

With a running clock, Norwalk St. Paul still scored two quick touchdowns. One via an 11-yard run, and another on an interception return. In the fourth quarter, a deep drive by St. Paul ended with a series of kneeldowns to turn the ball over on downs to Northgate.

Northgate struggled with a 19-man suited up roster for the game. Fatigue greatly played into the end result, as the second quarter was a war of attrition. One Northgate was ill-equipped to fight. Norwalk St. Paul had more than enough players to cycle through to keep them fresh. An advantage their roster could easily handle.

Overall, despite the outcome, my night in Norwalk was a night-and-day difference compared to Hoban. St. Paul, and Whitney Field, was welcoming, accomodating, and just generally pleasant to be at.

Despite the final outcome for Northgate, I hope the team and players felt the same. It might have been a blowout loss, but a good contest against a good team to test your abilities for the rest of the season.

It was just over two-hours home, purposefully avoiding the Ohio Turnpike.

For the weekend, it was 457 miles to the four games. Four new stadiums despite no new teams.

For photos from previous weekends and previous seasons, visit http://www.flickr.com/sykotyk/sets/