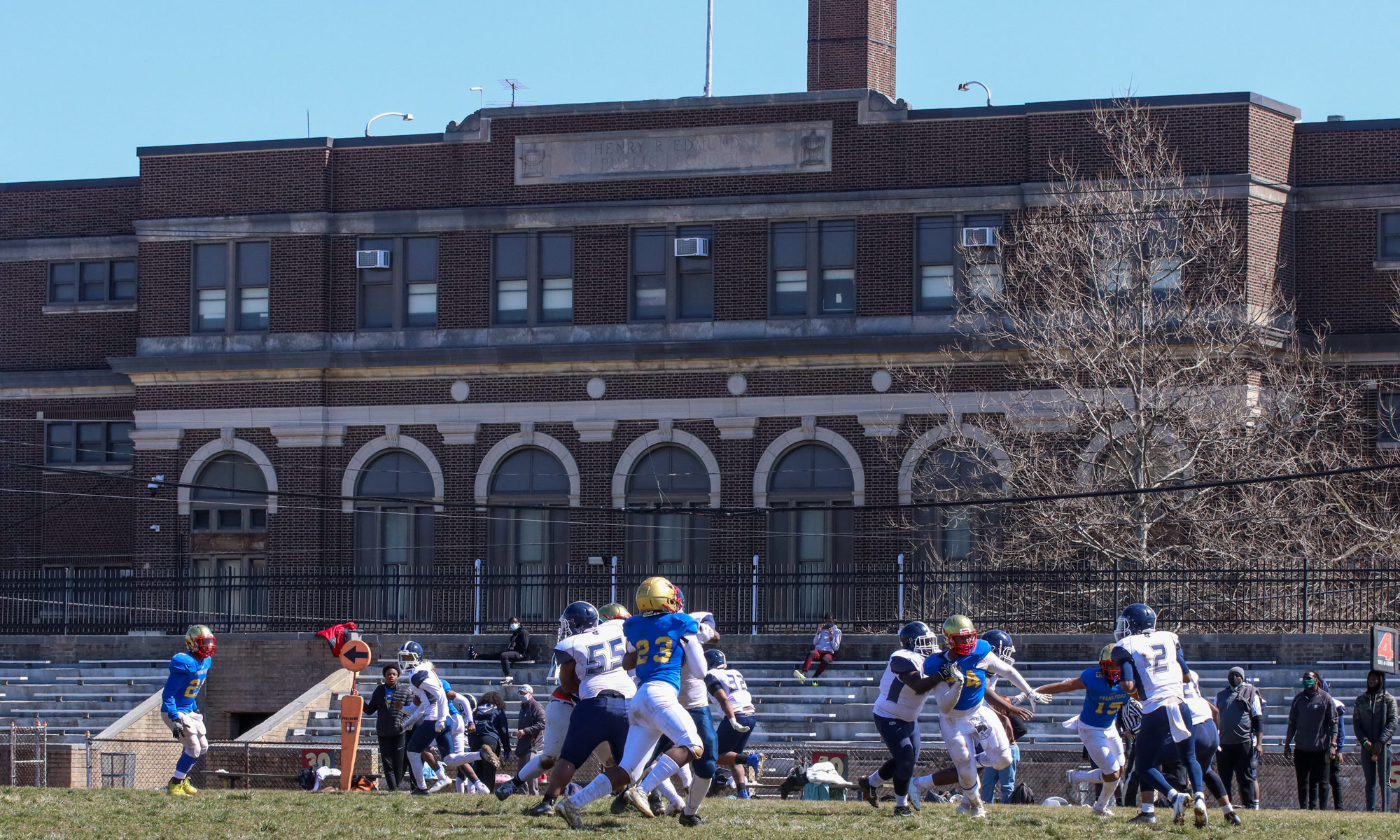 This was the first weekend of the spring season where everything went as planned. With no changes to the original schedule. Although there was an added game. Originally, there was no Saturday night game in Pennsylvania.

Friday morning, I was up and early and heading out by 7:30am. I followed I-80 east to I-476. Stopped at the Wawa stuck in limbo between the two interstates. Got gas and a hoagie. Then headed south to I-276 and east to US1. And followed that to George Washington High School.

This afternoon I'm at Mickey Young Memorial Stadium in Philadelphia, PA for an afternoon contest between the George Washington Eagles and the Vaux Big Picture Cougars. Kickoff is at 3pm. #98 @PaFootballNews pic.twitter.com/JM6Qw2YOza

This was my first game of the Philadelphia Public League. Unlike the much smaller Pittsburgh City League, which partly because the city only covers a small portion of Allegheny County, the Philadelphia Public League has 21 football teams in four divisions. There’s some changes this year because of Covid. A co-op of Vaux Big Picture and Strawberry Mansion, as well as some teams that didn’t play or haven’t played yet. The PPL has many charter schools.

In Philadelphia, many games are scheduled for Friday afternoon. Primarily due to lack of available venues and those they do have, many have no lights. George Washington’s Mickey Young Memorial Stadium is one such place. A beautiful, concrete stadium, located behind the school and baseball field. The field is grass, with no lights, and a small scoreboard to the western endzone.

The visiting team this day was Vaux Big Picture. A public high school in Philadelphia. This season, they’ve formed a co-op with Strawberry Mansion.

Both teams came out wearing dark jerseys. George Washington, the Eagles, were head-to-toe in blue. While Vaux Big Picture was wearing navy jerseys with silver helmets and pants. Though two players had black helmets.

George Washington opened with two touchdowns in the first quarter. And after that, the game stagnated as Vaux’ defense managed to hold some. Including an interception at the goal line to stop one George Washington drive. Later in the game, Vaux Big Picture had a long run down the right side, only to fumble near the goal line and the ball to roll into the endzone and out for a touchback. George Washington would get one last TD to win, 20-0.

With all the running and lack of scoring, the game took a brisk 1:47. So, had a bit of time before the start of the night game. It was just a bit southwest of George Washington in Northeast Philadelphia.

Tonight I'm at Charles Martin Memorial Stadium in Philadelphia for a game between the homestanding Northeast Vikings and the visiting MLK Cougars. Kickoff is set for 7pm. #99 @PaFootballNews pic.twitter.com/gjQQhO3roD

Unlike the earlier game, these two teams had played the week before in an actual game. Northeast had played West Catholic, while MLK had played Frankford.

Northeast is good. Of the public school teams I’ve seen in Philadelphia, including the one on Saturday, this definitely the team to be that I’ve seen.

Primarily because their defensive line was unrelenting. MLK’s quarterback struggled to ever have a free moment in the backfield to find his man downfield. And the few long passes that did get off tended to float due to the very strong winds blowing across the field. Two punts were the issues in the first quarter. One was -1 yard. While another was a short punt that was not downed by MLK, instead, letting it come to a rest while a Northeast Viking hovered over it. Picking it up, and with some nifty moves and some bewieldered MLK players unsure if the play was still live, would score a TD. Taking a 26-0 first quarter lead. And winning it, 40-0.

After the game, it was to the hotel. But, first, I stopped at a McDonald’s just down the street from the stadium at Northeast. And sat there for nearly a half hour as the ‘double loop’ setup of the parking lot turned into complete gridlock.

Finished up the photos for Friday and sleeping by 5am. Room Service woke me up just before 10. So, that was fun.

But, the afternoon game Saturday was at Frankford. Frankford is a beautiful area of Philadelphia. Frankford, famously, was once home of an NFL team. The Frankford Yellow Jackets. Though their stadium is gone, Frankford Stadium located between Dyre, Wakeling, Rutland and Large Streets.

This afternoon I'm at venerable Frankford Stadium for my 100th game of the 2020/1 season. Frankford Pioneers and Roxborough Indians kicks off at 12pm. #100 @PaFootballNews pic.twitter.com/2MZbCMx8tA

Frankford Stadium is a great old stadium.The stands run the length of the field on each sideline. There’s an old cinder track in disrepair that cuts into the corners of the endzones. There’s brick walls with ornate gates and fencing in the open spaces at both ends. There’s buildings built into the corners of the property where the fences meet the stands. The two northeastern ones are the locker rooms. The southwestern ones are restrooms. The field is grass and in fairly decent shape for mid-March.

The game started slowly. The back-and-forth favored Frankford, but no points went their way. The second quarter, however, was theirs. Two touchdowns on the ground and then Roxborough’s troubles with long snaps bit them. Barely getting the ball off the ground yet again, Roxborough’s snapper and punter flubbed on a snap, going past him, and then as the Frankford players jostled for it, the ball moved further back into the endzone where it was jumped on by a defensive lineman.

Frankford added two more touchdowns in the third, and got the running clock going. At that point, the scoreboard clock had frozen and it ended the third quarter. The fourth quarter ran without a clock. Guestimating the final scoring play’s time remaining. And then, the scores also were frozen and unable to be changed. However, the quick clock ended things with Frankford winning, 42-0.

This was my 100th game of the season. The fifth time I’ve reached triple digits in a high school football season. Even if this was one weird season.

After the game, I cut across a few streets from the Frankford neighborhood to the waterfront, near the docks, to stop for a late lunch/early dinner, at Longhorn. Met up with Billy Splain of PAFN, and then headed over to the night game at 6pm.

This evening, I'm at Bok Field in the South Philadelphia Super Site for a game between the Neumann-Goretti Saints and the West Catholic Burrs. Kickoff set for 6pm. #101 @PaFootballNews pic.twitter.com/JEPOQTBXfM

The South Philadelphia Super Site is located right near the South Philly Sports Complex. Where the NFL, MLB, and NBA/NHL venues are located. The South Philadelphia Super Site is just across the I-76 freeway to the north. I’ve been by it countless times, but first time to see a game there. Had plans last weekend. But with the PPL converting many of their games into scrimmages, made seeing my planned game at the stadium impossible.

Now, I’ve listed this as Bok Field. I did some searching for the name. Basically, I really dislike using “complex” as a location’s name. Primarily, because a complex would be the entire sports complex. Not the stadium or field the game took place at. So, it’s field > stadium/bowl > park > complex. There’s a few weird exceptions (Wolvarena, Wolverine Mountain, etc). With my research, I found that the track is named “Bok Field Track” and that when this stadium was first being built, it was called Bok Field (for Bok Tech High School), and also Southern Field after before the official name of the complex was South Philadelphia Super Site. Super Sites being the name given by the PPL for the four major renovation projects (South Philadelphia, Northeast, Germantown and Gratz). Though the first three are the main ones.

This game started with a bang. Neumann-Goretti exploded for a quick TD and a smothering defense. And then a game that seemed destined for a blowout stagnated. Not because West Catholic seemed like they were going to come back or stay in it. But, just that the Saints faultered as the game moved on. And then, a deluge of points and two late safeties made it 36-8 for Neumann-Goretti.

For the weekend, it was 820 miles and cost $158.46. Almost entirely food and gas. $20.90 was tolls for I-476 on the way there, and I-76 from Valley Forge to Harrisburg East on the way home. I generally shunpike, but the time saving, though minimal, was worth it to me. No hotel costs this weekend, either. 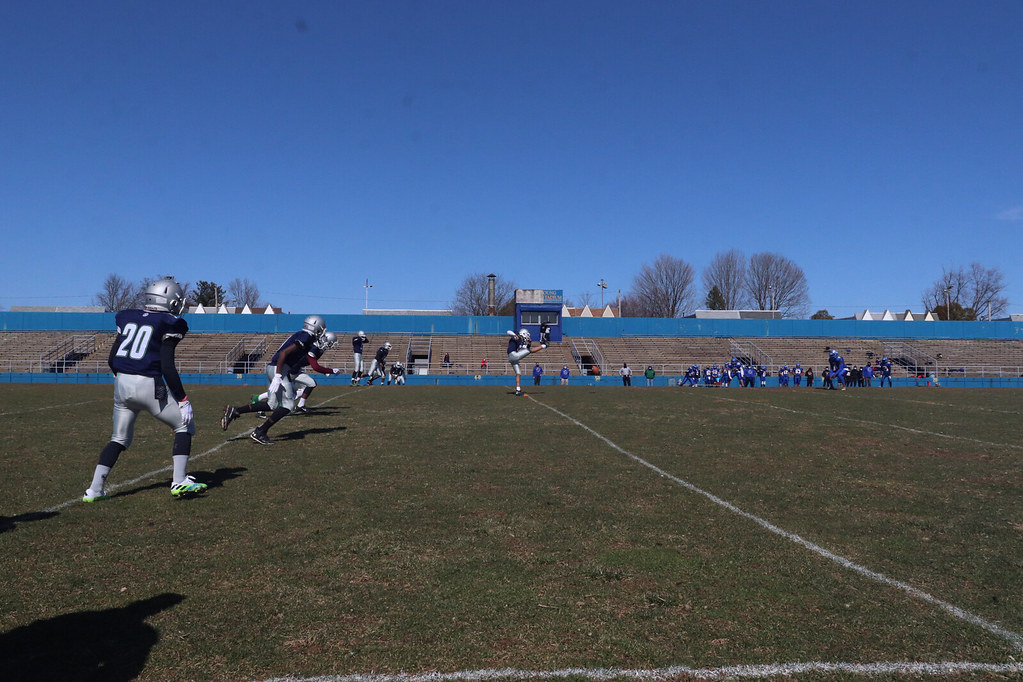 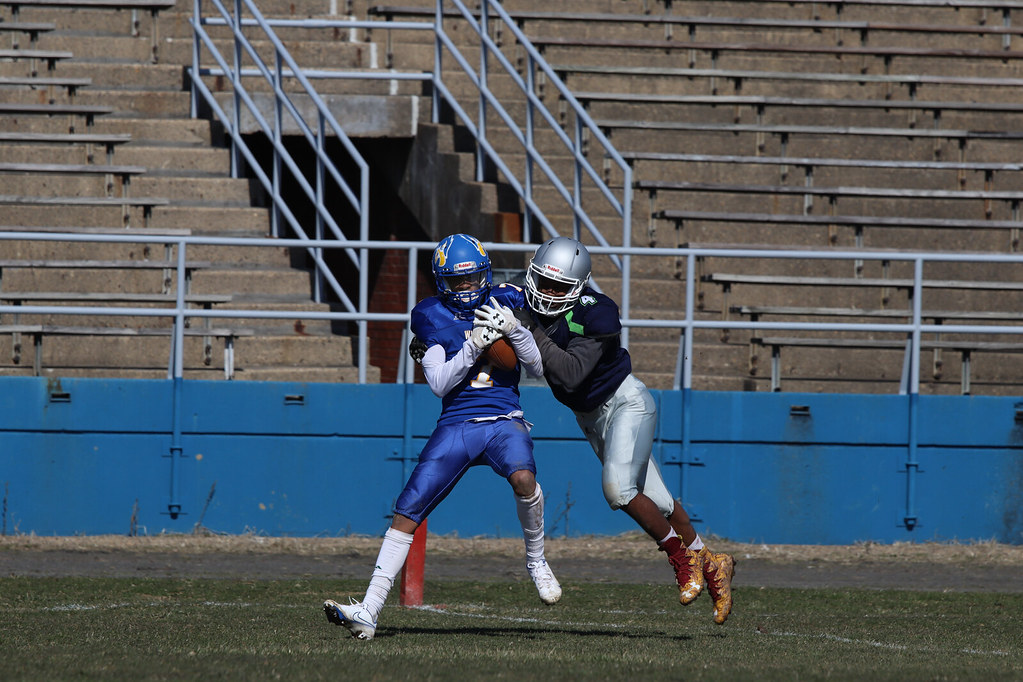 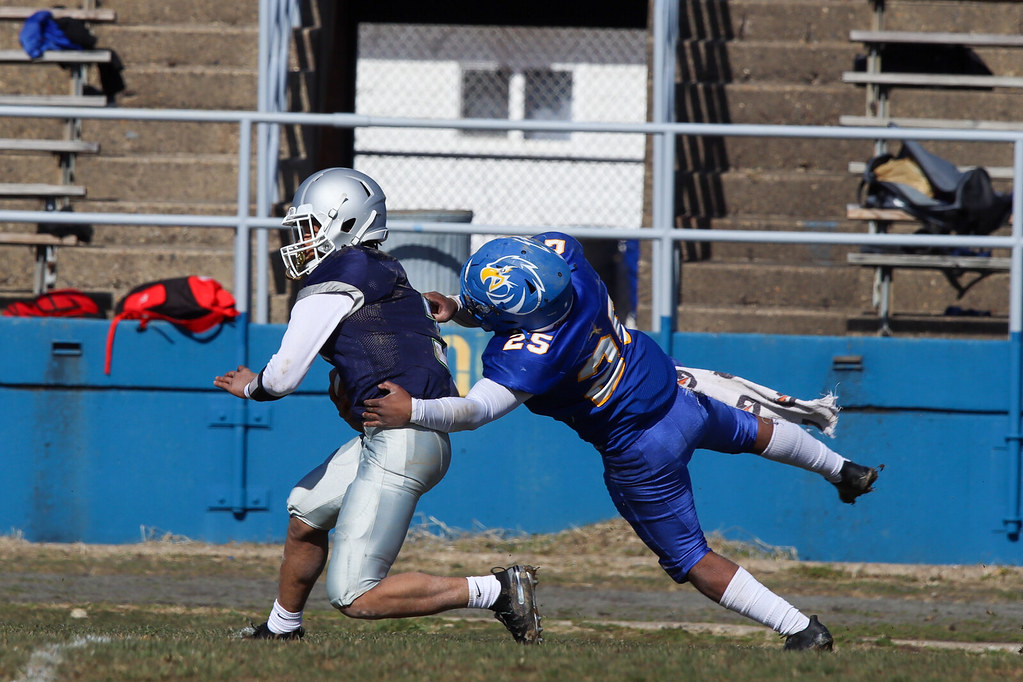 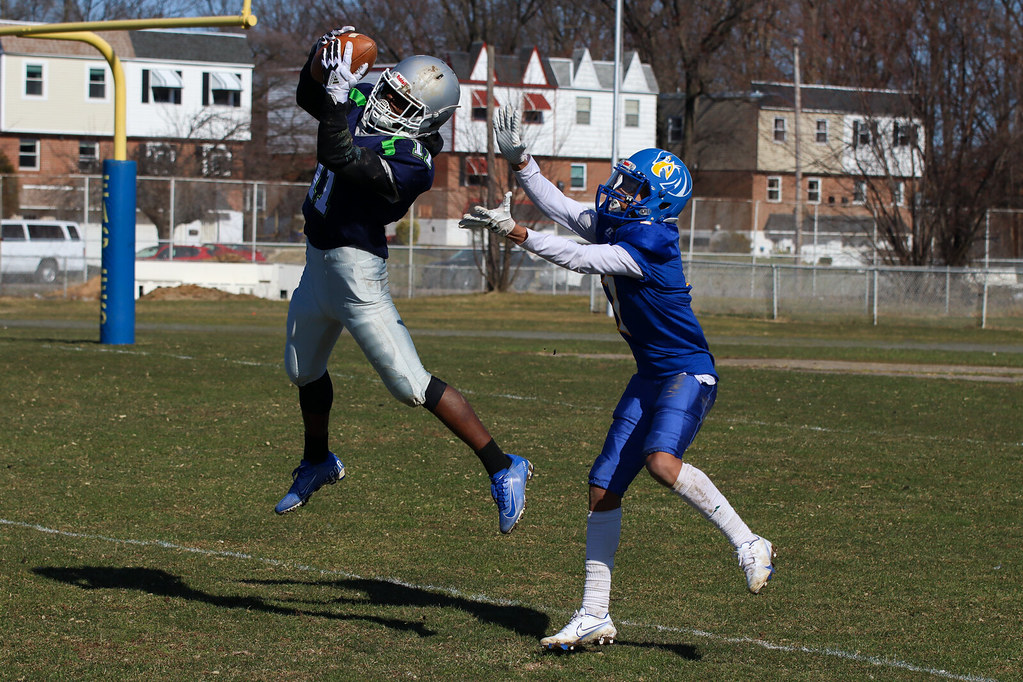 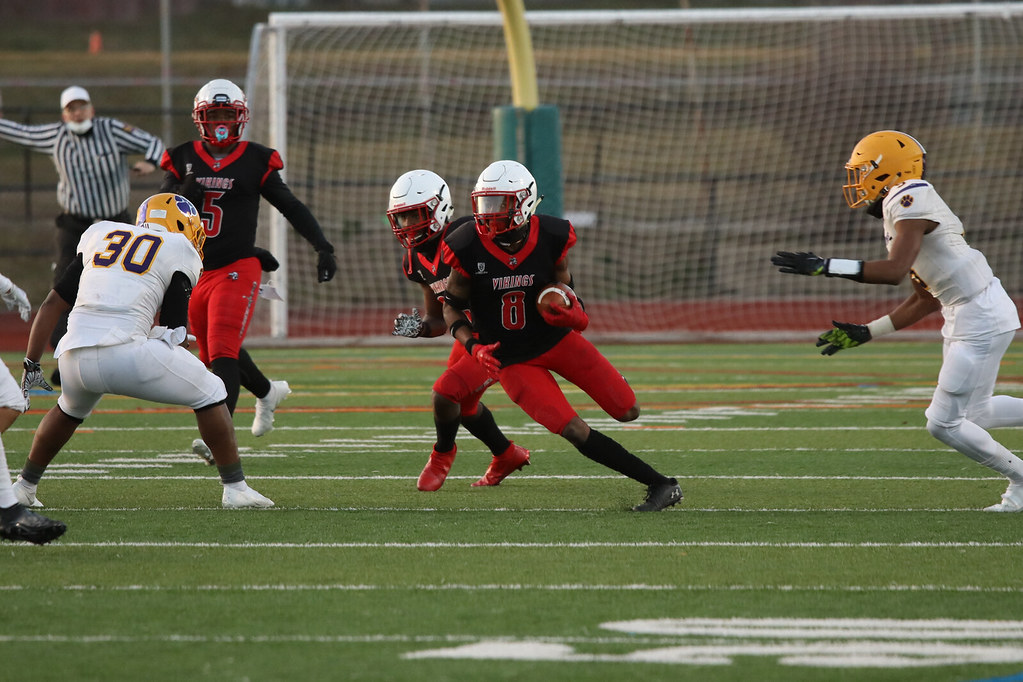 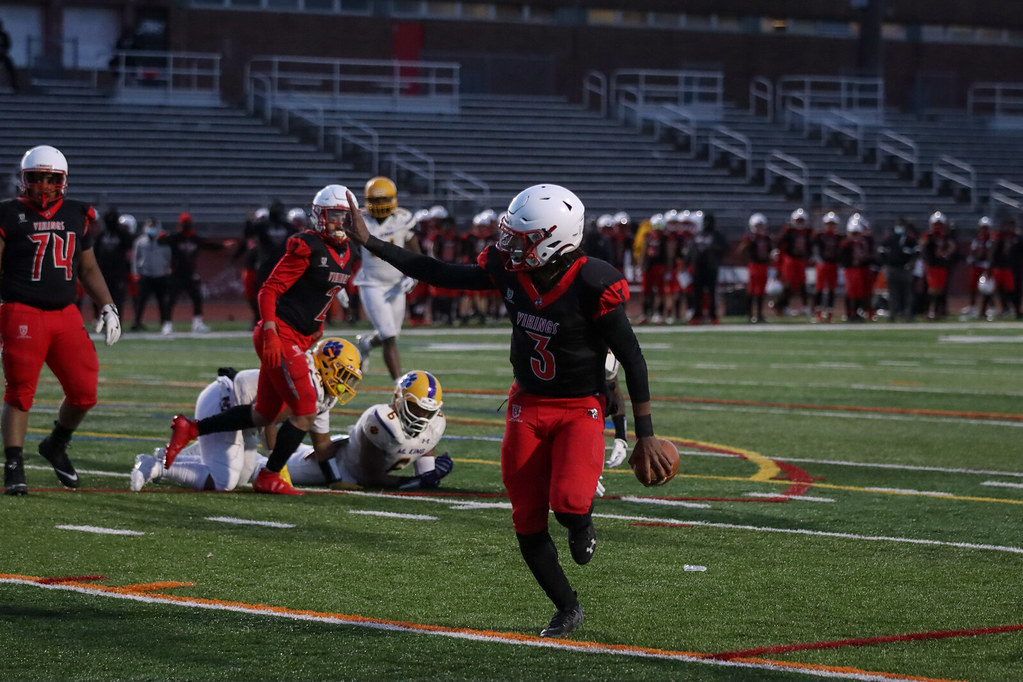 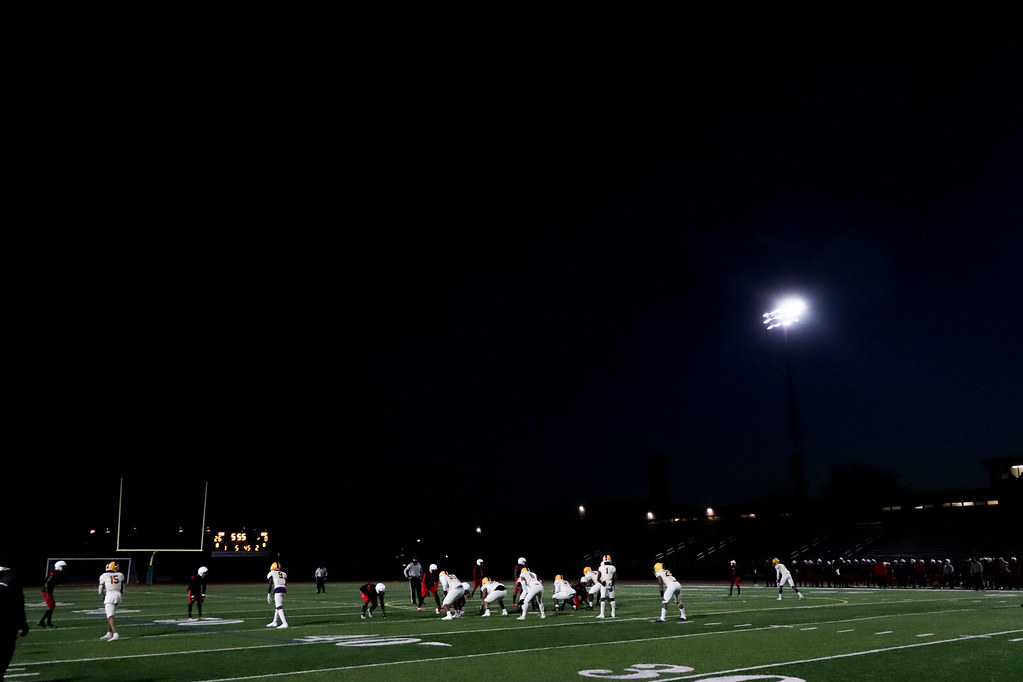 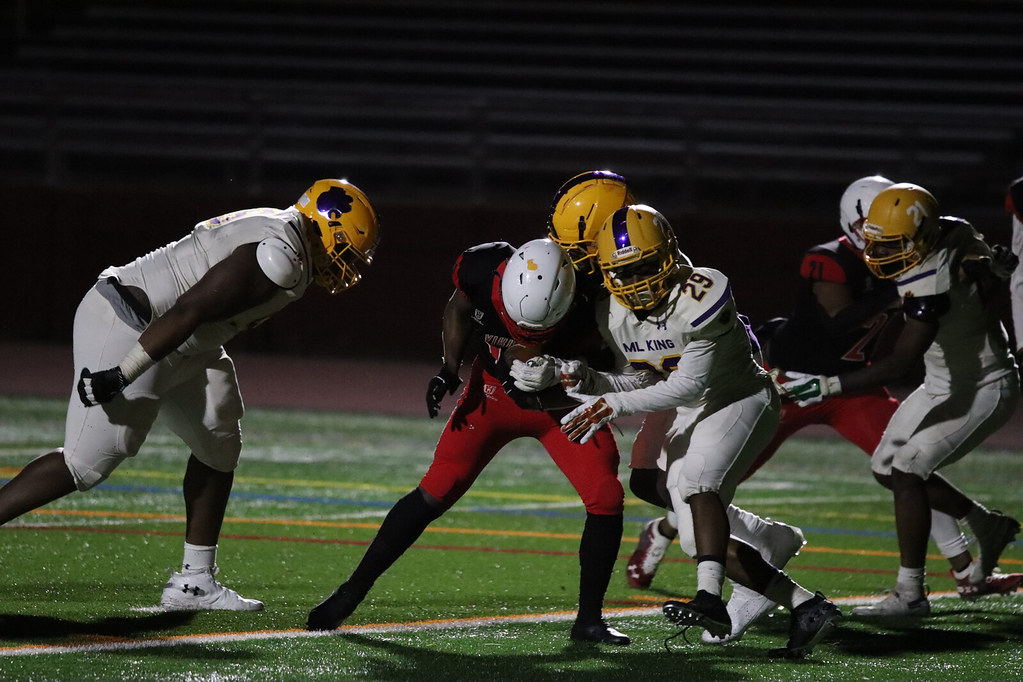 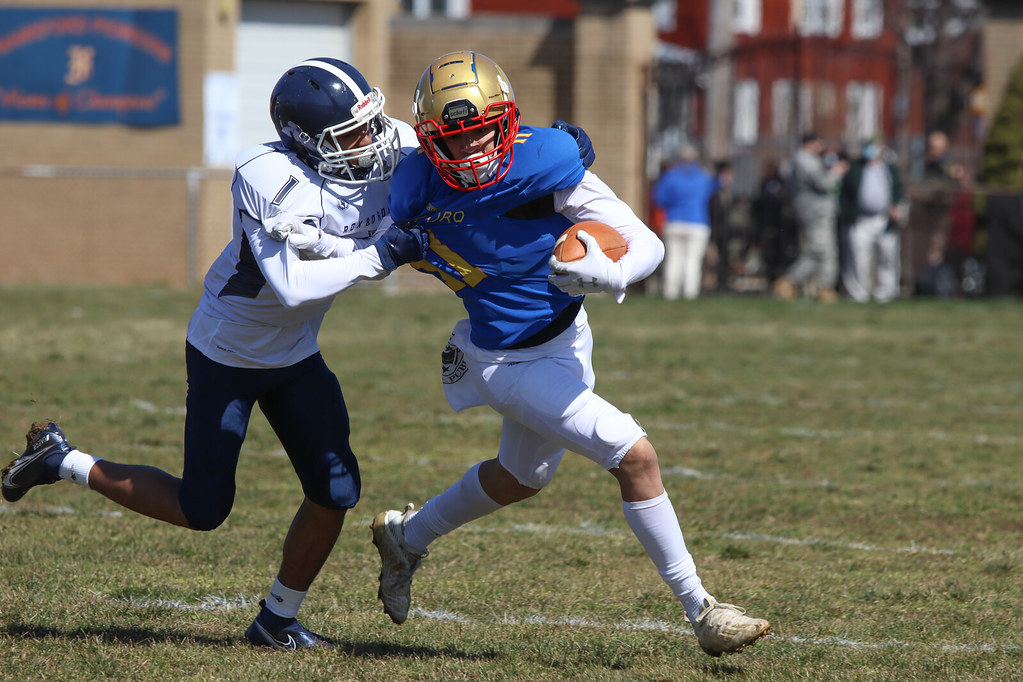 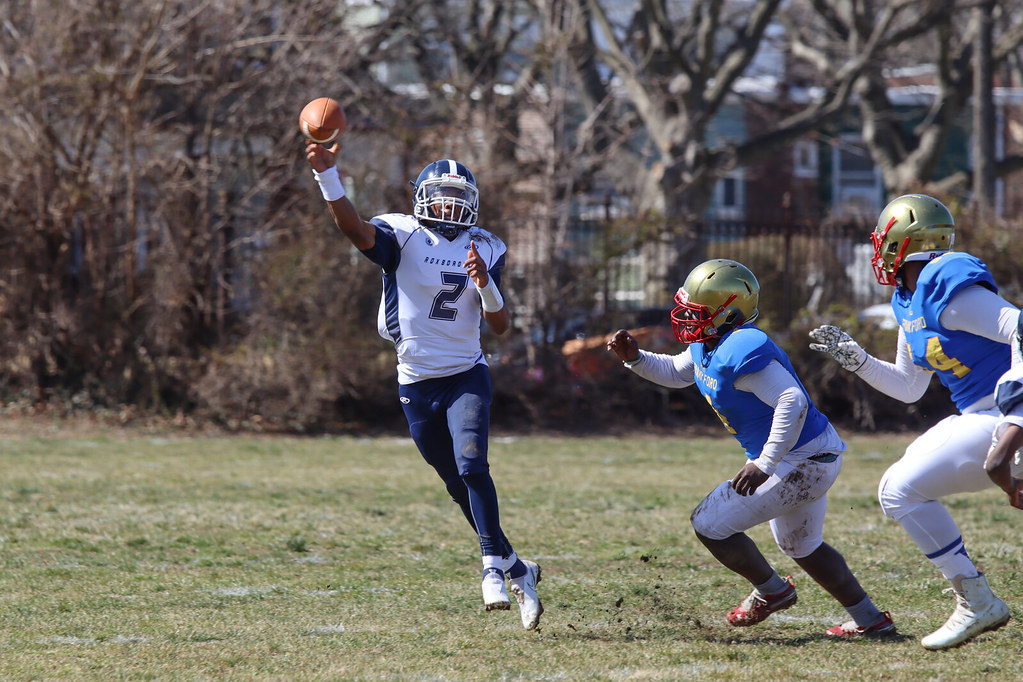 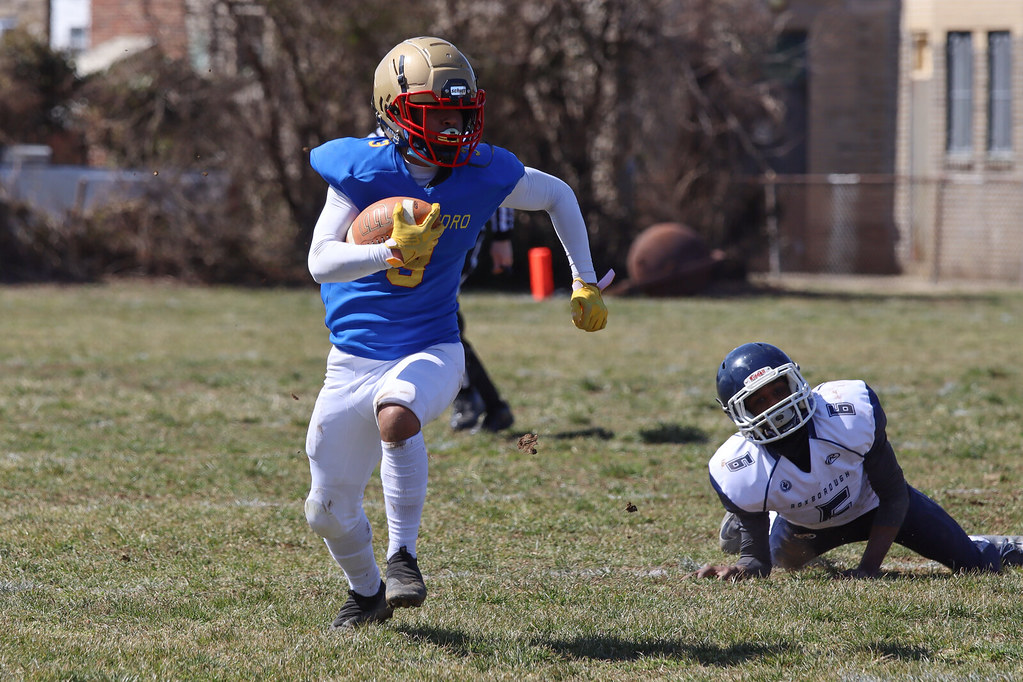 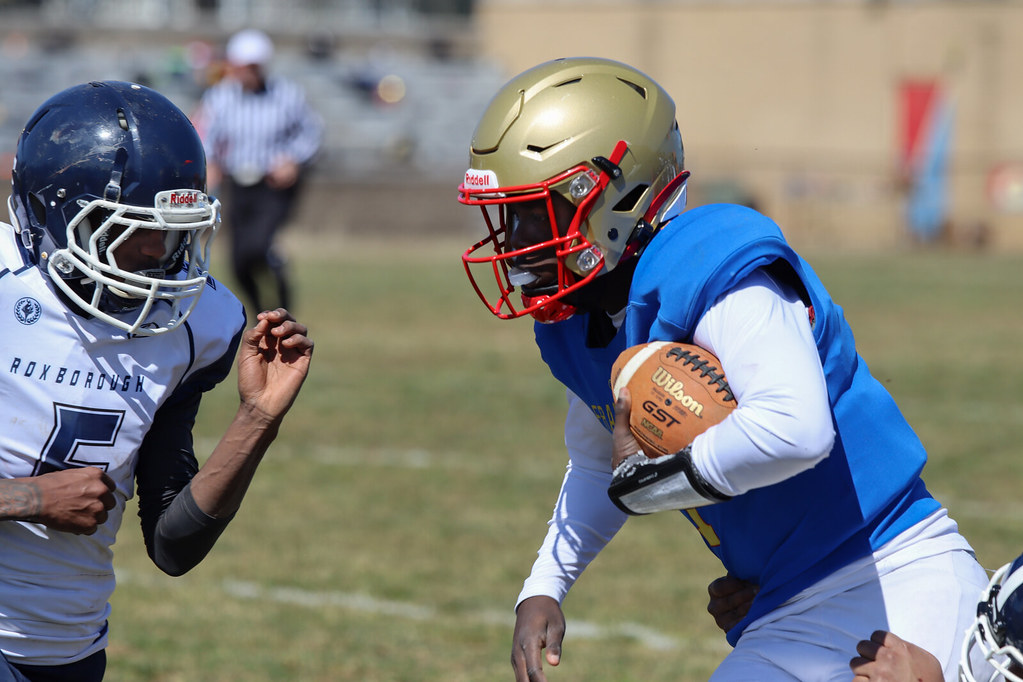 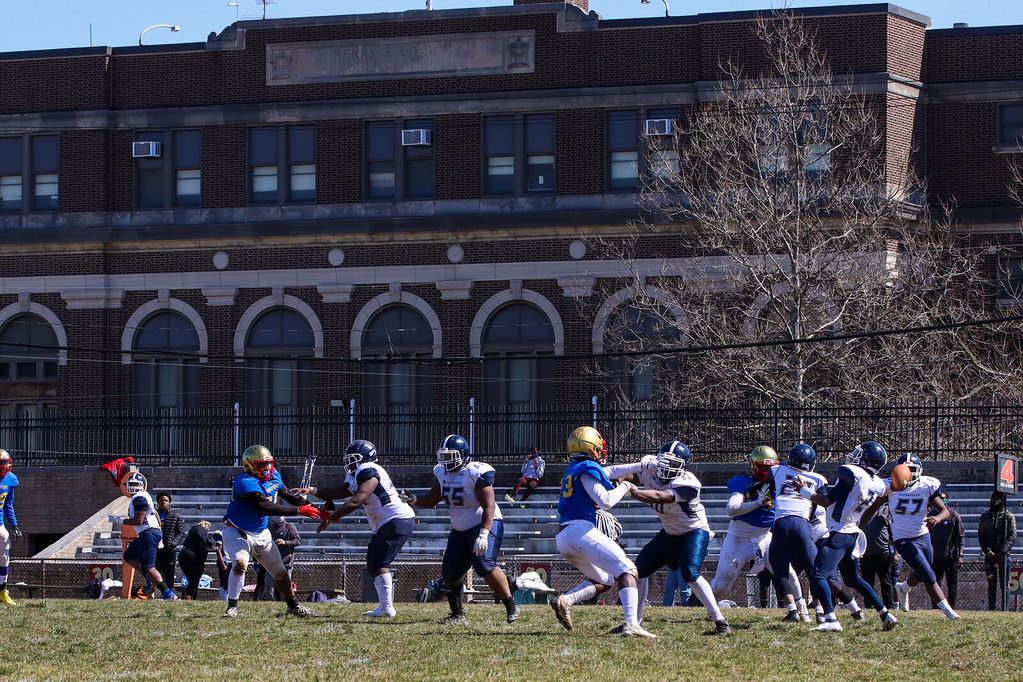 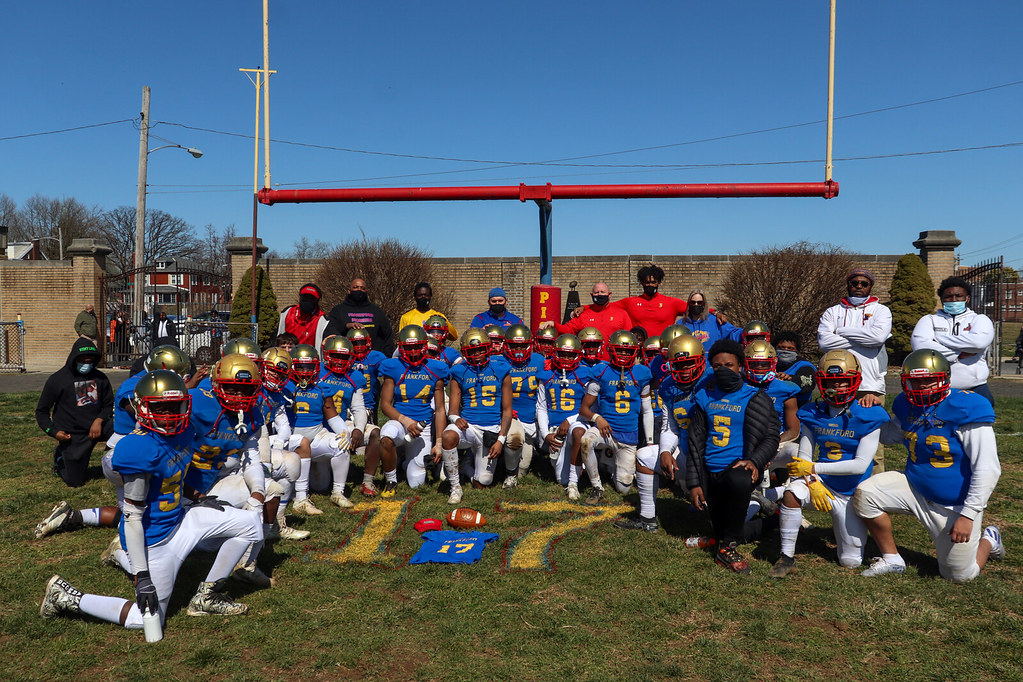 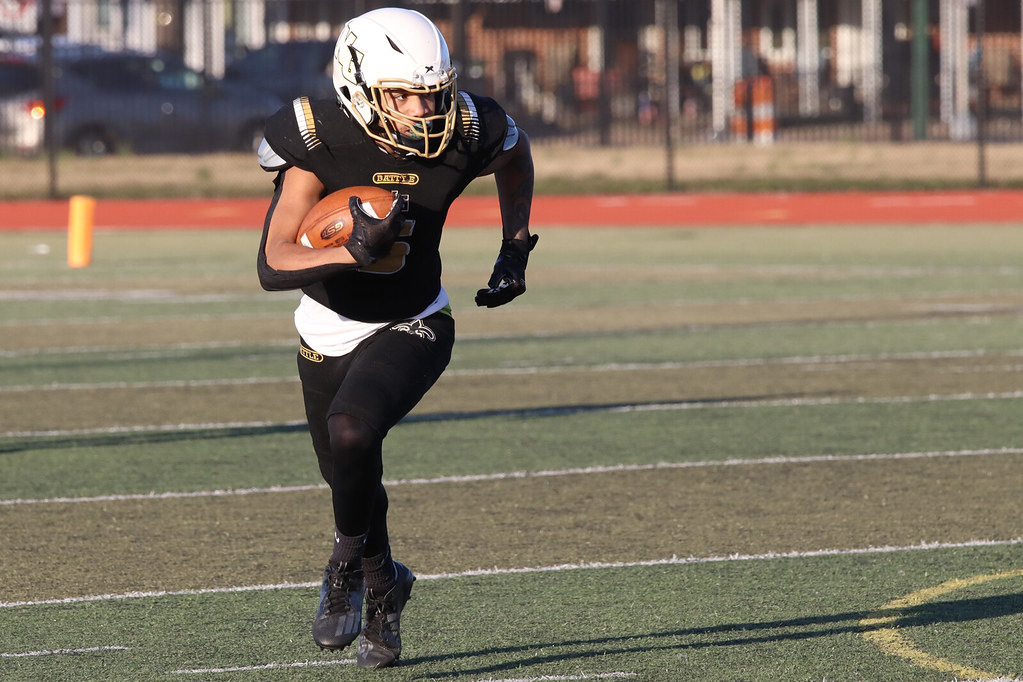 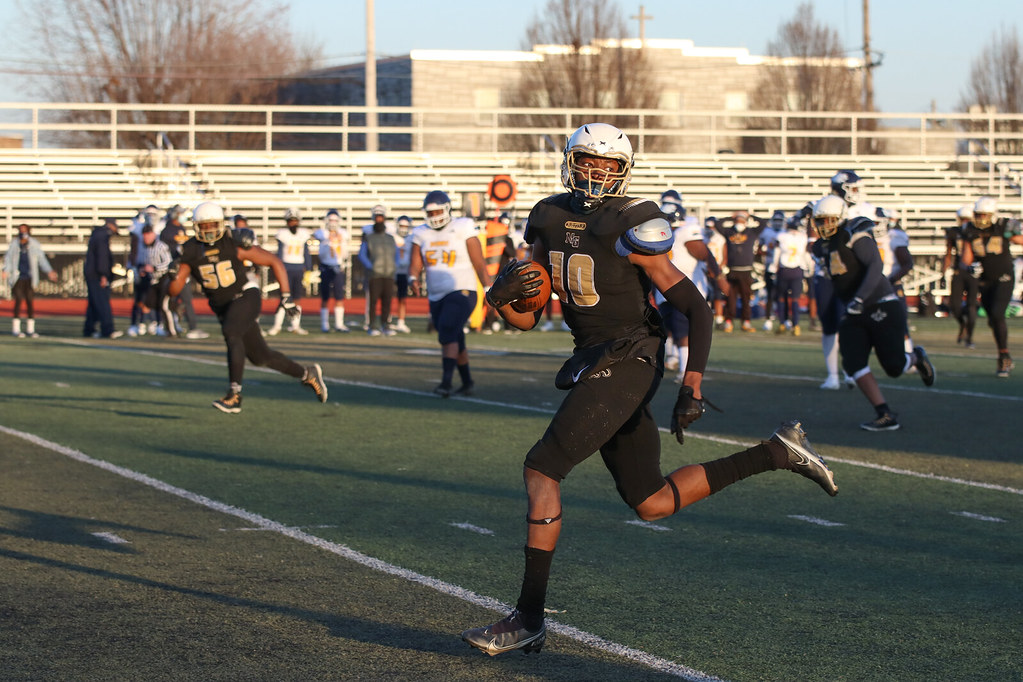 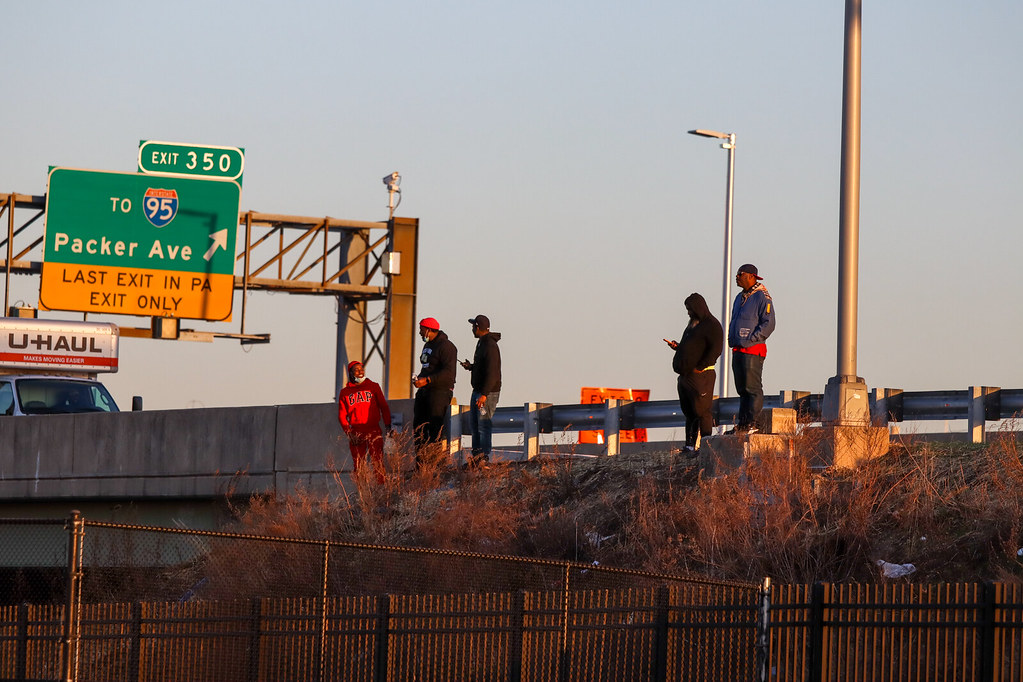 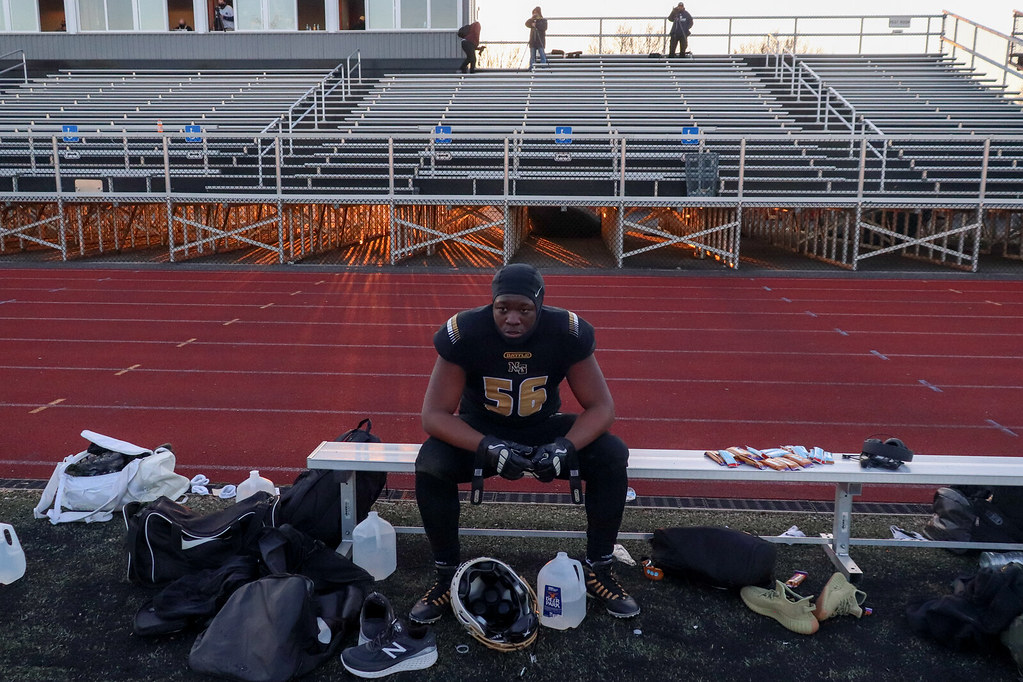 I had four games planned for Week S4. However, two cancellations threw a gear into the works. The Saturday night game was cancelled. And another Saturday afternoon game was cancelled. So, even though it wasn’t my game, it still led to a reworking of the weekend schedule. Imhotep Charter was supposed to play

Should still be a fun weekend. Just hoping for no more modifications to the schedule.