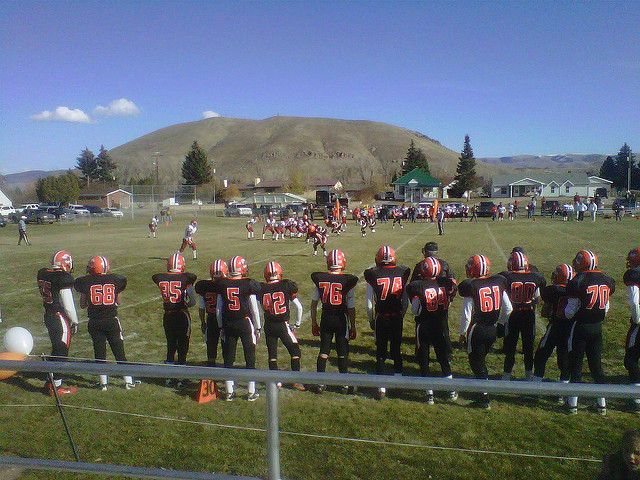 This turned out to be an entertaining, albeit tiring weekend. I saw three games in 27 hours spanning 551 miles of high country. The reason was Wyoming’s willful disregard for Saturday games and Colorado having one decent game on Saturday afternoon.

My Friday started in the small town of Cokeville, Wyoming on the western border with Idaho. A small community of 500 with an outlying area of just about a thousand total. The Cokeville Panthers were hosting the Niobrara County Tigers of Lusk, Wyoming. This was a 1A rematch of the 2010 state final. The Cokeville Panthers were victorious in that game, and came in with 19 state championships overall, second most in state history (Sheridan has 22, but only 12 on the field. Cokeville has 18 on the field). Lusk, meanwhile, has 5 titles, all on the field.

Panther Field is situated right in town and open with no fences surrounding it. This, I had come to learn, was because Wyoming high school sports only charge admission for playoff games. Regular season games for any sporting event are free and open to the public. Hence, the very visible lack of fences. Admission was accepted by an attendant standing on a street corner to the northeast and northwest of the field. As was customary in other smaller midwest towns, many spectators simply parked their cars around the field’s raised berm angled downward toward the action.

The stands themselves were simple 6 rows about ten yards long on each side of the 50 cemented to the ground level with the street behind them. The center section was open with the pressbox/concession stand facing the field. Bathrooms were available inside the high school’s main concourse to the southwest of the field. A simple scoreboard depicting the score, quarter, down and distance sat to the southeast. The stadium, in keeping with an afternoon start, lacked lights. A large, orange C was painted at midfield.

Cokeville wore black jerseys and pants with orange helmets. A white, square “C” on the helmet was overlaid by a leaping panther. PANTHERS was written across the chest in orange, as well as the numbers. The Lusk Tigers (more on it in a minute) wore dark red helmets and pants with white numbers. Their numbers were also dark red.

As with many schools out west, I have found, many teams go by the community’s name, rather than the school’s name. This can be for several reasons. Usually do to county-wide contraction or such. Just like Garfield County High School in Jordan, Montana going by the name Jordan Mustangs, so to does the Niobrara County High School go by their town’s name for the Lusk Tigers.

But, officially, they’re still Niobrara County to the state. After an early score by Cokeville, Lusk was powered by a 69-yard run by their star player, #12 Prather to go up 7-6. In the second, Cokeville scored twice to go up 21-7. Just before halftime, Cokeville forced a punt and fair caught it at the 42 yard line. Taking the advantage of a 30-plus MPH wind, Cokeville attempted a free kick off the fair catch but came up a few yards should anyways. It was the first time I got to see a fair-catch-kick. Suffice it to say, neither did the fans in attendance that were confused.

After a scoreless third quarter, Cokeville hammered in a 2-yard run to make it 28-7. The few hundred fans in attendance left excited as I walked down the town’s streets framed with orange and black balloons tied to the sign posts.

Cokeville is making their 25th appearance in the state championship, holding an impressive, 18-6 record. They will play Yoder Southeast at the University of Wyoming’s War Memorial Stadium in Laramie. It will be a three-hour drive for Southeast. Cokeville will be traveling about six hours.

Immediately following the game, I drove to Green River to watch the 3A semifinal between the Green River Wolves and the Powell Panthers. Wolves Stadium sits on the south side of the town as it starts climbing the hills to the south.

Wolves Stadium has seats only on the southwest side of the field and the scoreboard sits to the southeast corner. A fire department building sits just behind the scoreboard across the street that is used for effect. On big plays, scores, etc, the fire trucks blow their air horns and the firefighters set off fireworks.

The stadium is natural grass and ringed by a track. Piles of dirty snow lined the edges of the track near the field. It was a beautiful night and the predicted rain or snow had missed the area.

I happened to run into a fellow Browns and Ohio State fan in line for my ticket. It turns out my orange Browns jacket is the primary color of the visiting team.

Green River opened up with a 7-0 lead on a 24-yard sideline pass less than two minutes into the opening quarter. In the second quarter, Powell netted a field goal and was followed by a short 3-yard touchdown pass by the Wolves.

In the fourth quarter, Powell scored on a 47-yard pass to make it 14-10 with 8:45 left. Powell then scored again on a 24-yard run and lateral into the southeast endzone to take a 17-14 lead with 4:13 left. With all the momentum going against them, the Wolves returned a kickoff deep into Powell territory to setup a 3-yard pass on 2nd and goal. With 41.7 seconds left, Green River held a 21-17 lead.

A good return by Powell to near the 50 setup a fantastic finish. The first play was a six yard pass to near the sideline. On second down with the clock running, a long streaking route by the wide receiver down the far sideline was connected with for a cut-back 44-yard touchdown pass with 12 seconds left. The kick was no good, and Powell kicked off with a 12.0 seconds left. Unfortunately for the home side nothing would come of their possession. Instead of earning a trip to Laramie, they get to sit and wonder what might have been.

After the game, it was a long drive to Limon, Colorado for the third game of my weekend. The game started at 1pm on Saturday at Limon’s Gaskill Field on the northside of town.

Gaskill Field is a small mixed-build structure. The small metal structure sits with the pressbox near the 50-yard line. Two large solid wood bleachers sit to each edge of the metal stand. The stadium is situated with the field aligned north-to-south. A concession stand is located in the southeast corner of the stadium ground. The visitor side features three small bleachers. An 8-lane black track encircles the field.

Tickets for the game between the Limon Badgers and Wiggins Tigers were $8 for a first round walk-up game. Which, given the cheap price of tickets in various parts of the country, seems high. Considering a state-semifinal in Wyoming only commanded $5.

With the playoffs concentrating on Saturday afternoon games, a smaller crowd of 500 or so were in attendance for the 1A playoff. Despite a very strong 30+ mph wind coming from the south, it was excellent November weather for the eastern plains of Colorado.

The Wiggins Tigers were their opponents. This is the second time this year I’ve seen them play. They defeated Platte Valley, 16-5 earlier this year in Kersey. Unintentionally, I seem to have started following them.
Their colors are black helmets and pants with white numbers outlined in orange.

As the weekend progressed, the quality of the games have increased. And this one turned out to be great.

Wiggins was moving the ball well after a short Limon punt, but couldn’t manage a score as the game was scoreless after one. In the second quarter, Limon scored on two straight possessions to go up, 12-0. The first was a 4-yard run and the second was a 29-yard pass. The first PAT was blocked and the second one was a failed running play.

Wiggins finally put it all together in the following drive and had a 25-yard QB draw for a touchdown to make it 12-7 with 49.9 seconds left. Limon began driving the ball quickly to reclaim a two-score lead when the improbable happened.

Throwing a pass to the endzone, Wiggins’ defender stepped between the receiver and the ball and snatched it at the goal line. Following a line of blockers to the far sideline, he cut the corner and away he went. Avoiding a few tacklers down the sideline and avoiding going out of bounds, he scored the touchdown after time expired to give Wiggins the lead. The 2-point run was good to make it a 15-12 lead at the half that completely altered the game.

Near the end of the third quarter, Wiggins scored on a 1-yard plunge and had the kick blocked to make it 21-12. All game long, Limon had issues with ball control. The fourth quarter wouldn’t be any better for them in that regard.

After an efficient drive down the field to pull within one on a 21-yard pass and a two-point run with 10:38 left to trail 21-20. Wiggins threw an interception into the endzone with 5:57 to give Limon life. But, Limon suffered from a poor pass that was intercepted. Wiggins was running the clock and turned the ball over on downs. On the very next play, Limon fumbled the ball away and was recovered by Wiggins. Lining up in the victory formation was enough to seal the victory. Underdog Wiggins moves on to the next round where they host Parker Lutheran.

In the weirdest of circumstances. I will probably see that game as well. It would be my third time seeing this little 1A school in the middle of northeastern Colorado. And the first time I would see them as the home team on their home field. I have opportunities to see other games, but Wiggins seems the most likely. There’s still the chance I may not be able to catch any game. We’ll figure that when it gets here Saturday.

As for the teams I’ve seen from around the country.

Platte Valley is now 6-4 following a loss to Eaton in the season finale. They travel to Arvada in suburban Denver to play Faith Christian on Saturday. Wiggins, as mentioned, are now 7-3 and play host to Parker Lutheran. Lamar (6-4) travels to play Brush on Friday night. Kent Denver (9-1) hosts Pagosa Springs on Saturday.

In Indiana, Fort Wayne Bishop Dwenger lost to Leo, 35-14 to finish their season at 7-5. Indianapolis Cathedral (9-3) beat Greenwood, 38-14 to setup a matchup with Pendleton Heights.

Wyoming plays all five playoff games in Laramie on Friday and Saturday. At noon on Friday, Lyman and Lovell play in the 2A final. At 3pm, Powell plays Douglas in the 3A final. On Saturday, at 10am, Little Snake River plays Dubois in the 1A-6Man final. At 1pm, Cokeville plays Yoder Southeast in the 1A-11 Man final. And in the finale, Cheyenne East plays Sheridan for the 4A final.

In Nebraska, Norfolk (4-5) and Fremont (1-8) have completed their seasons.

And lastly, in North Carolina, Eastern Alamance (9-3) defeated South Johnston, 49-19 to advance. Burlington Williams (6-6) beat Northeast Guilford, 22-21 to advance. The two teams setup a rematch against eachother in week 12 after the game I witnessed between the two in Week 10.

There were a lot of options to see games this weekend. And then something came up. So, a game on Friday in Brush and a game in Wiggins on Saturday is the best I can do. And even then only the Saturday game seems plausible.

But, no matter what, I hope to be somewhere for a game. I’ll just be amazed if I see Wiggins for a third time.