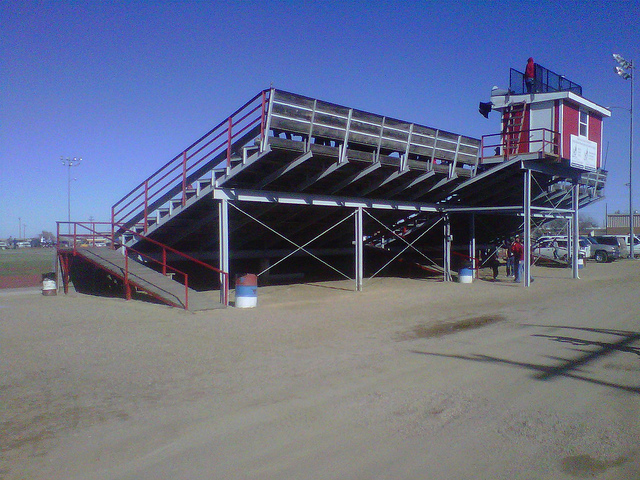 Well, this will be a brief update as I’ve been busy all week and don’t have time to recap a lot. This weekend, I hope to be in Texas for the at least four games. Either in Arlington at Cowboys Stadium (2 games Friday, 4 games Saturday) or maybe Plainview and Odessa.

Anyways, my weekend was hectic with a little football thrown in. The weekend started in Brush where I saw the second half of Lamar (a team I saw earlier this year) playing at the Brush Beetdiggers. It was one of the few non-front range games to be played on Friday night. Brush came in as the #1 seed in 2A, while Lamar snuck into the playoffs as the #16 seed. In Colorado, they play a state-wide playoff.

Brush was easily the best team, winning 41-12 after Lamar punched in a touchdown as time expired. Beetdigger Stadium was nice, but lacking. A simple metal structure on only one side of the field. All fans had to sit segregated along the northern 30 yard line. A concession stand was setup to the northwest of the stand in behind. The field was grass, but was beautifully manicured to the point you could say it was fake if not for divots forming. A few fire & rescue vehicles sat across the field and used their lights to celebrate big plays.

The next day was in the small town in Baca County, Colorado on the way to Texas. Springfield is home to the Springfield Longhorns, an 8-man team hosting Dayspring Christian out of Greeley in the northeast part of the state. The “Big Red” as they’re called wore all red with white numbers and white Texas Longhorns logos on the helmets. Dayspring wore blue/gray Philadelphia Eagles-inspired uniforms with the silver wings above the facemasks.

The town is quaint and Aaron Hale Field is a nice old wooden structure. The restrooms and concession stand sits behind the field jutting out from the school. This was the first high school stadium that sold chicken wings. And they were well worth the price of $2 for 4 wings. I ate a dozen homemade wings to go along with the brisket sandwich I had at a small restaurant in town. The school’s three cheerleaders stood down on the red track that ringed the field and conducted quite enthusiastic fan chants. Maybe due to the small crowd, but everyone knew them, and everybody seemed to participate in them.

Dayspring scored first after a scoreless first. And then Springfield finally got on the board to make it 6-6. However, miscues ruled the day for the homeside as Dayspring tacked on two touchdowns. The worst being a fumbled punt return (the second of the day) that setup Dayspring’s final score to make it a two-possession game right after Springfield had forced a punt to try and tie the score themselves. Still, a bitter pill for the home fans as the clock ticked down. Dayspring Christian 21, Springfield 6.

And, after that it was a long drive to Plainview, Texas for one game. I had thought of seeing two games at Bivins Stadium in Amarillo for the day but figured I couldn’t get there in time to see any of the first game. Instead, I got to see all of the Springfield game and the second half of the Forsan game vs. Sanford-Fritch. The SF Eagles wore black and blue on their white visitors uniforms while the Forsan Buffaloes in their all-black with white helmets.

Sanford-Fritch had a 14-12 lead at the half, and made it 21-12 with a touchdown in the early third with a missed kick. That was followed by Forsan getting a 96-yard touchdown run and a two-point conversion to make tie it at 20-20. A 53-yard run (kick failed) by Sanford-Fritch recaptured the lead. Forsan countered with a 9-yard run, but also couldn’t convert a kick as it was blocked to keep it deadlocked, at 26-26. With about six or so minutes left, Sanford-Fritch had a 51-yard run to make it 33-26 and then held Forsan to a fourth down play deep in Eagles territory to hang on to the win by pounding the ball down the field as time expired.

A fun, thrilling end to my abbreviated, yet quite full weekend.

Wiggins, the team in Colorado I’ve seen twice this year and who I thought I might see play on Saturday afternoon won again. They host another game this Saturday.

I’ll recap more of the team-by-team results for next weekend as a lot of states are finishing up their seasons already (such as Wyoming and North Dakota).